A modification that covers all the basics to properly sexualize your Fallout 4.

WHAT IS THIS MOD?

This is a jack of all trades mod regarding sex features. Its purpose is to cover all the basics features a reasonable man or woman would want regarding sex, in a coherent, consistent, fair and balanced way gameplay-wise, the goal is to give a simple all purpose mod for sex to use as a "dressing" for your vanilla gameplay. Due to its vanilla friendly and completely modular and customizable nature it can be paired well with almost any other good mod by simply adjusting its settings accordingly but it excels when used as the only main sexual mod in your load order.

The primary focus of MCG is to expand the social interactions of the player with neutral, friendly and also enemy actors... because as you surely have noticed, Fallout 4 doesn't have many non combat activities, with MCG, instead, you can rely on solid gameplay and finally pretend to live the world, socially interact with the NPCs, make friends and lovers, recruit who you want as companion, stop in bars, play and flirt with npcs, date people, fear harassment, prostitute yourself, trade in slaves and much, much more...

All these requirements are mandatory

These mods are not required to be installed, but you can expand MCG features if you install them:

This is the button you need to use to start the mod if you choose to not activate it when prompted to do so in the welcoming popup message: 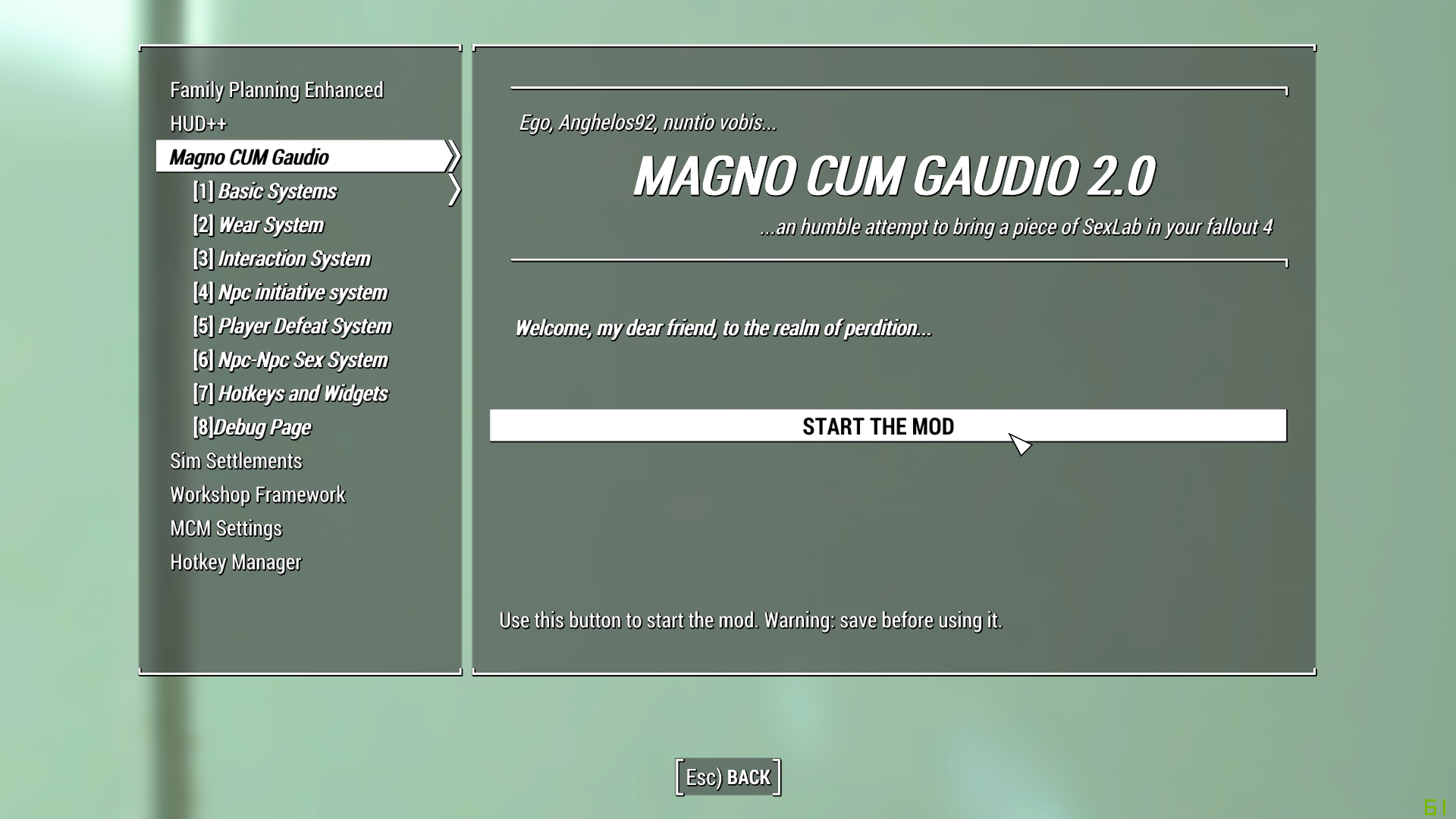 These mod are not required and they are entirely optional, these are just my personal recommendation:

HOW TO UPDATE THE MOD: If you are updating a save to version 2.12.50 from version down to 2.7.30 you must unistall the previous version with a mod manager. Then install the new version with the mod manager and finally once in game you must stop and restart the "Npc Initiative system" and "Respawn system" (Player defeated features) if you use them. Updating from versions lower than 2.7.30 is not possible on the same game, in that case a new game is required.

MOD STATUS: The mod is officially finished feature wise. Support for bug fixing will continue if needed. At the current time I have thoroughly tested this mod in my personal gameplay and fixed all I found but this doesn't mean that this mod will run perfect for all configurations out there since mods for Fallout 4 are counted by the thousands and frankly I cannot make this compatible with all of them, so stick with the instructions, always read everything in the mod guide and the FAQs and other materials I have provided you in the long period I developed this mod.

BETHESDA CREW; For stealing my time.

THE AUTHOR OF F4SE; Because some mods will just be impossible to code without it;

DOC CLOX, VINFAMY AND CHOSEN CLUE; Because they started everything about sex in Fallout 4...

ASHAL: Because of the best sexual framework ever seen on this planet, and because his work on Skyrim enabled me to make MCG for Skyrim LE on which this mod is based and ported from even with all the current limitation of FO4;

DAGOBAKING: Because of the AAF.

FLASHY(JOE-R): For inspiring me in start modding Fallout 4 in the first place, and for RSEII abductions system!

IGNOTUM_VIRUM: for letting me check his code for inspiration!

LAZY GIRL and KENTINGTON: for inspiration in the cloning code;

ODESSA: for sexout wear and tear!

I do not condone any form of violence or sexual abuse in real life. The content of this mod is purely fictional as the game "Fallout 4" which modifies. The file here presented is allowed to be downloaded only by people with the legal age of their country of origin and capable of discerning fiction (as this game and this mod) from reality.

Check HERE for the full changelog.