Hi everyone² ! Mourning White chapter 6 is going to air in a few days, and it's been a long time since the previous chapter. And with time, one forgets.

So for this occasion, I redesigned this entry entirely, adding characters, story presentations, and most importantly summaries about Mourning White previous chapters. There's also a menu at the end for the ones wanting to refresh their memory first hand.

Hi everyone ! Due to the growth of the Small Library, and to the birth of the Storytellers' Club, I've decided to split its concept in two separate parts. Henceforth, after the library comes the bookshelf (

), a tiny hub for the Chronicles of Mereth entries, with quick access to all chapters, summaries & characters' presentations. For the occasion, Malicia herself has joined me to write this out...

Malicia : « Hi-i ♪ ! Here's the problem : there's this guy, Alter Native, with his niiice blog summary, you see ? Well, Tirloque was very jealous of him, yes. So he said he needed someone intelligent, pretty and strong to help him write his own summary. So it could only be me. 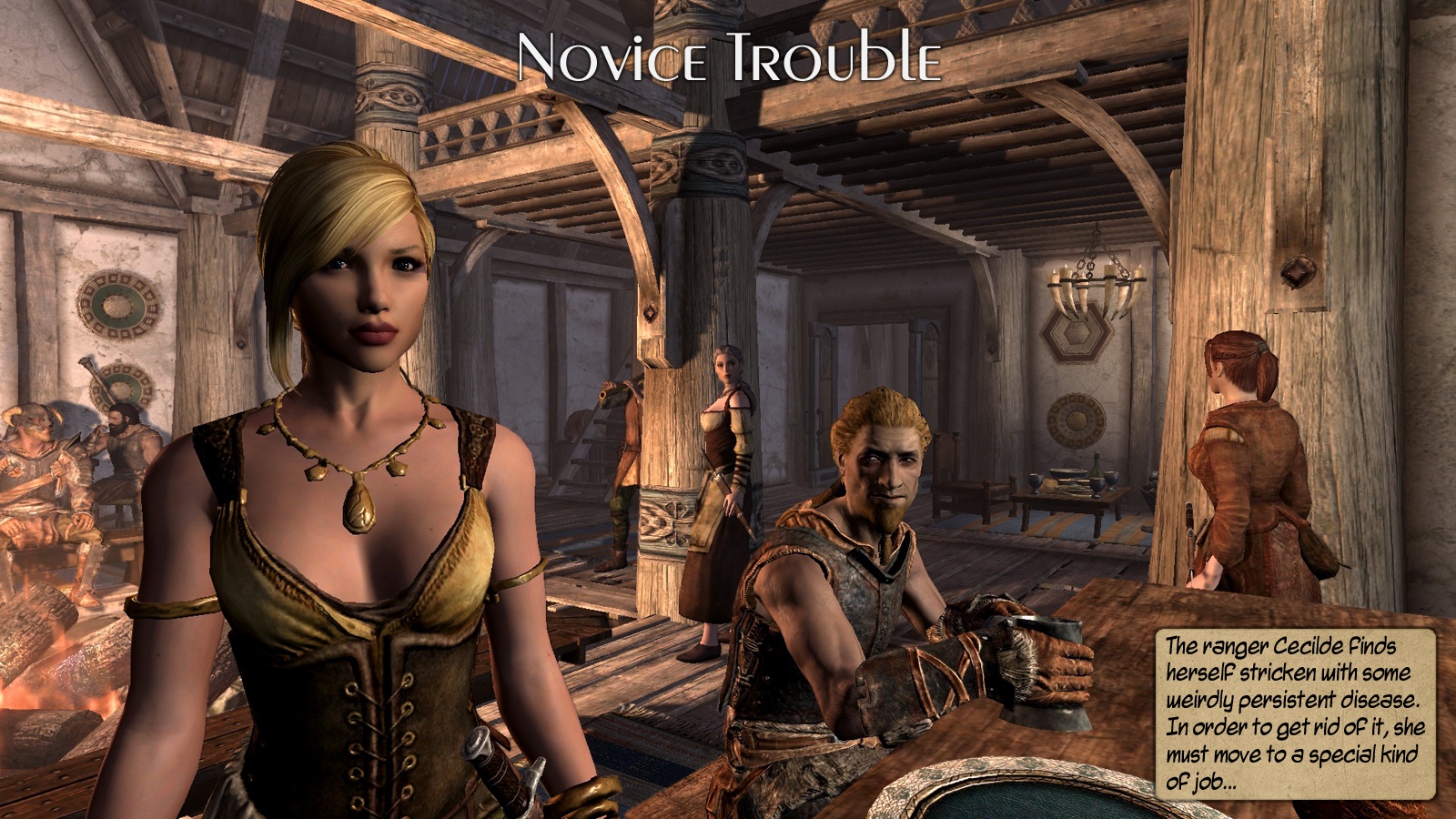 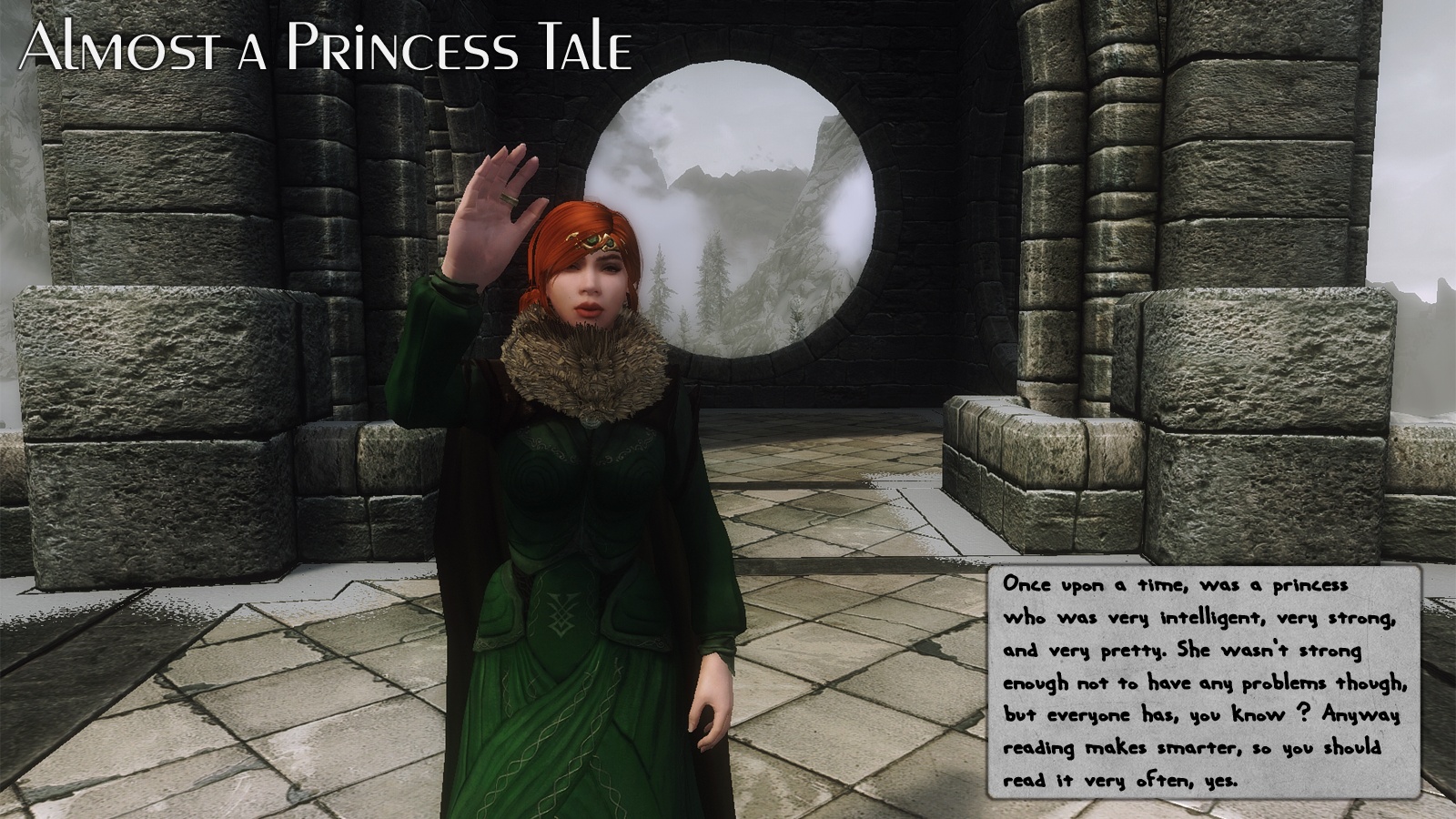 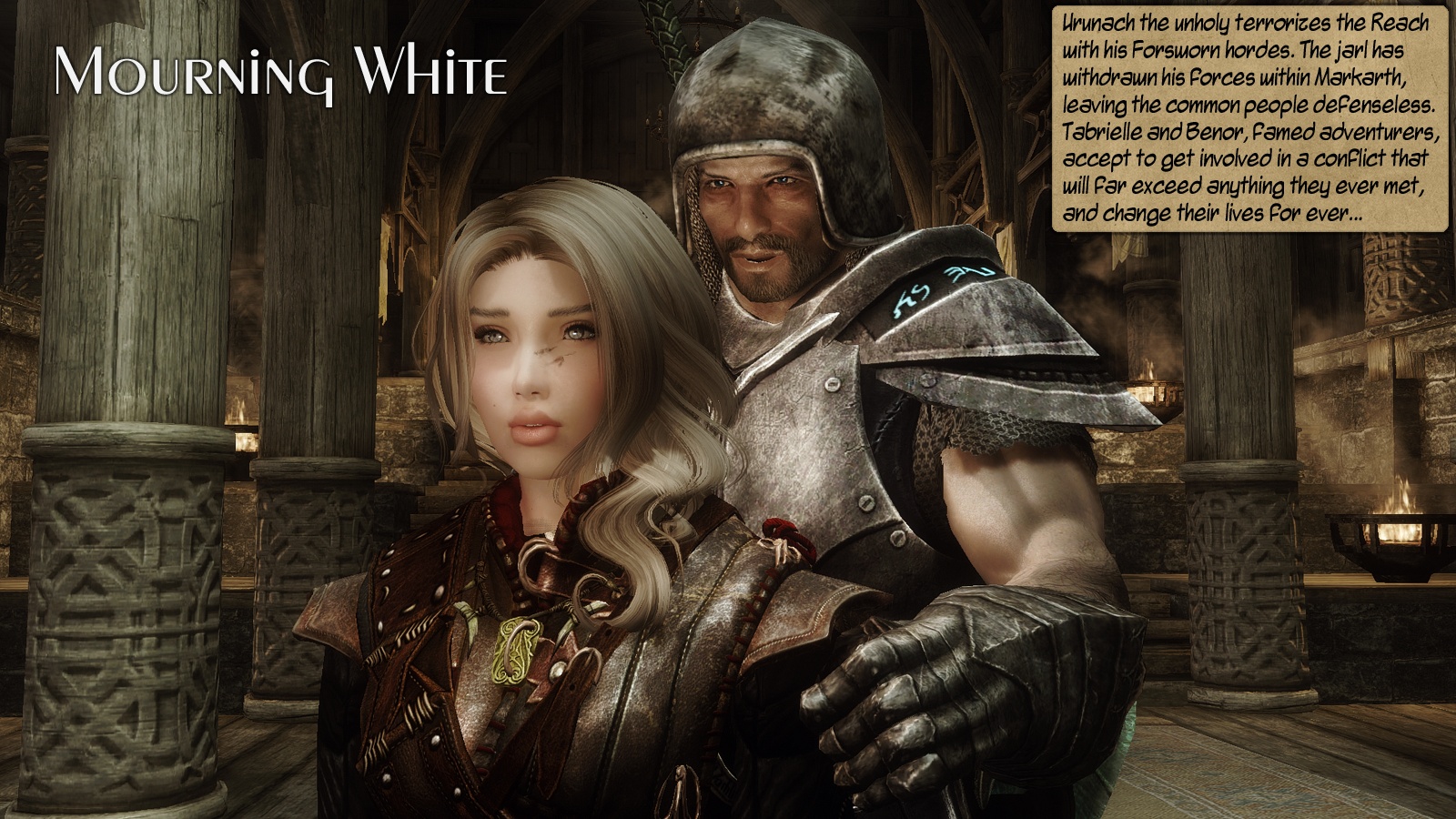 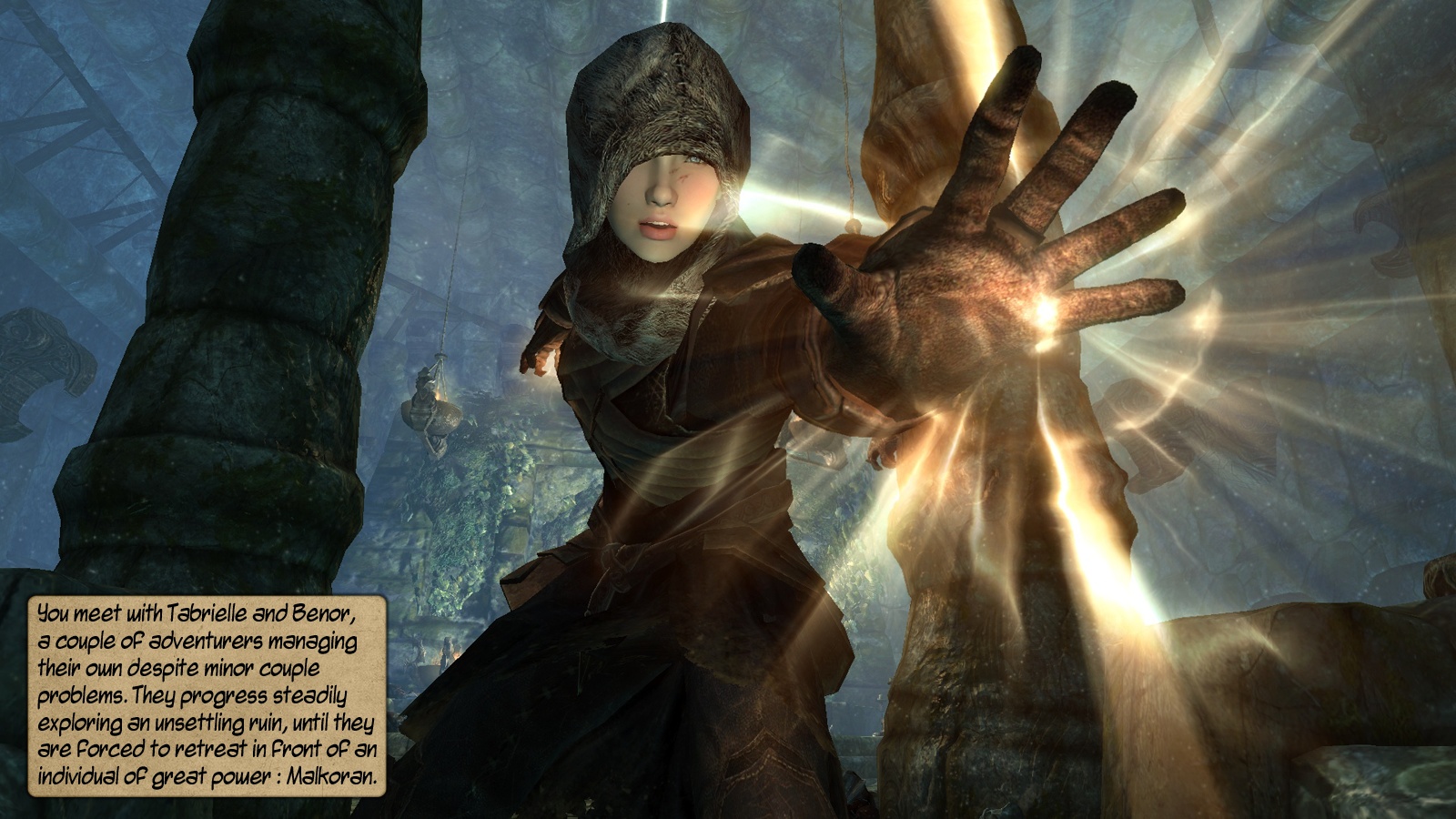 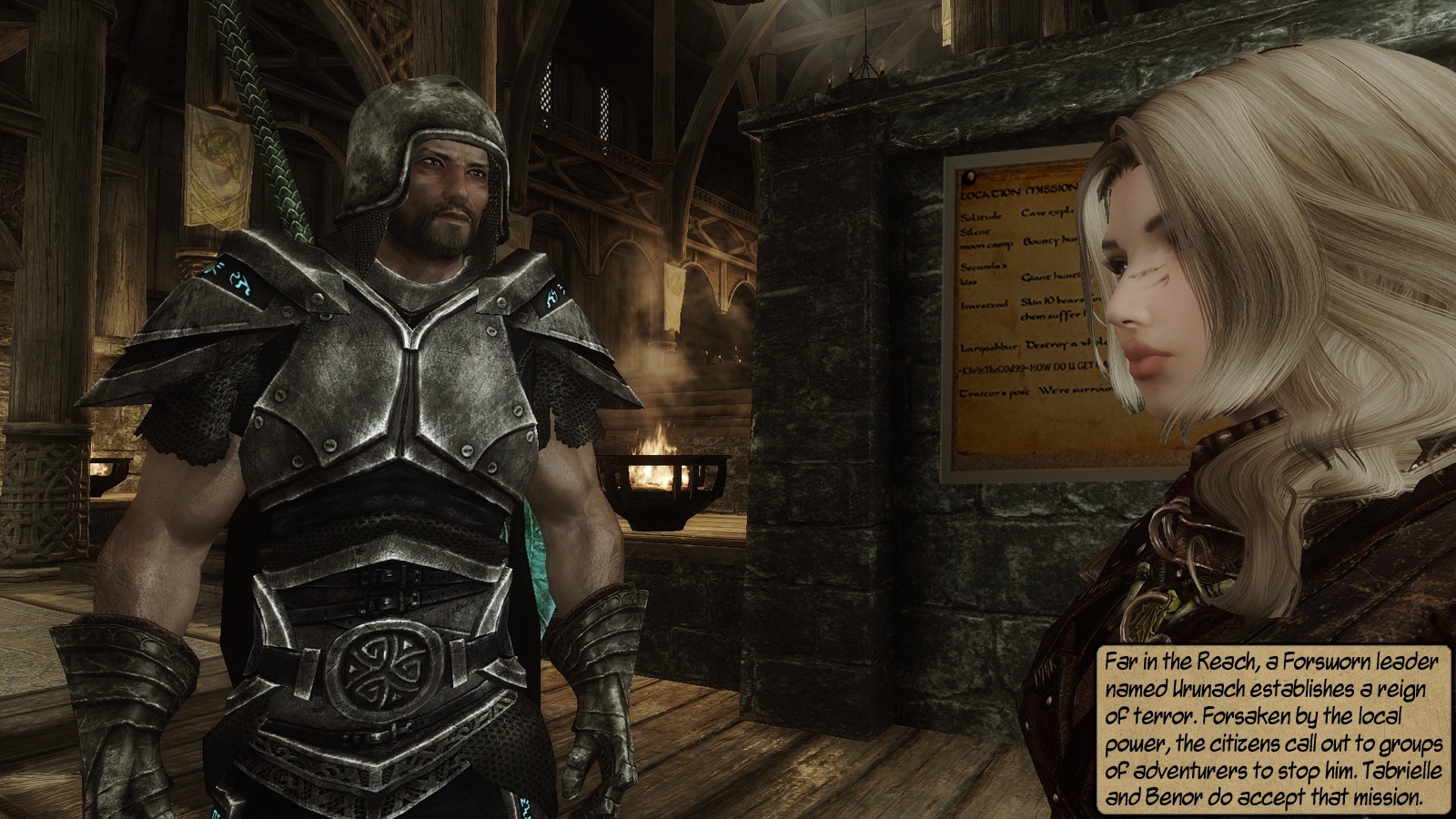 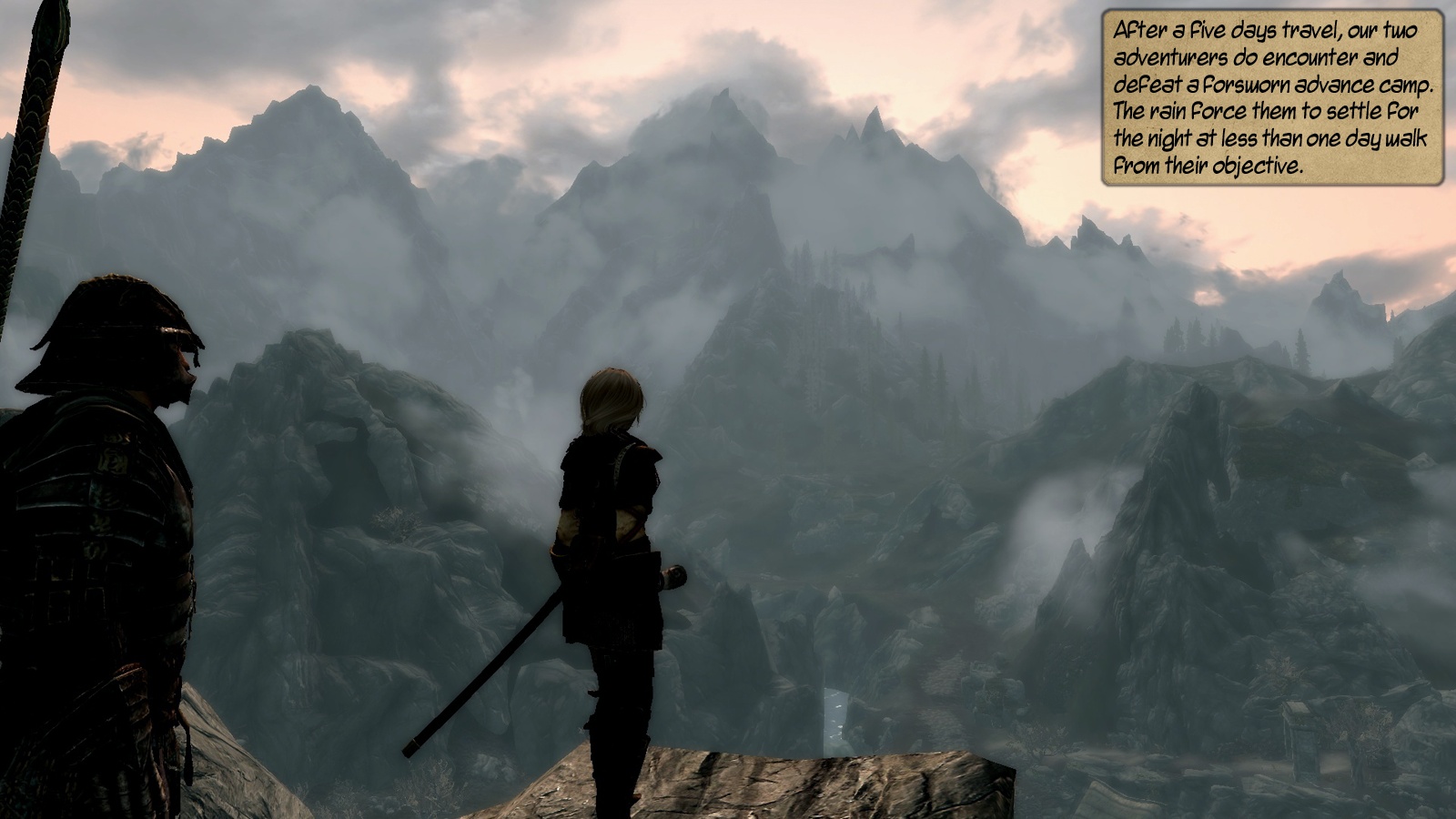 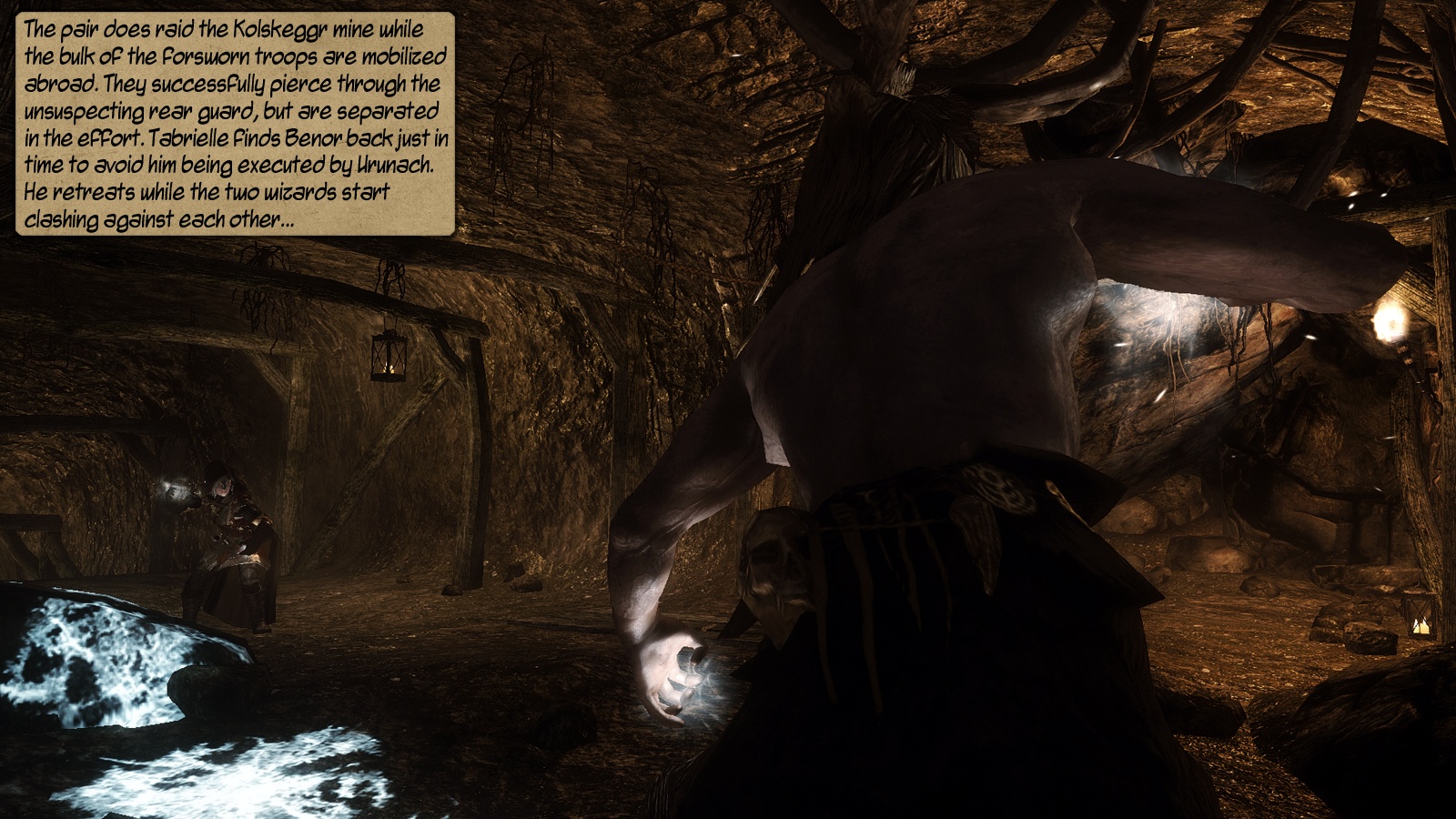 Small standalone crossovers happening aside the chronicles themselves.

A quick presentation of the characters developed in the chronicles. For the D&D lovers wanting more, those of them having in depth character sheets are indicated by a link below.

Malicia : « So you see, there's this guy at Hulda's inn : he never listens to me ! All he does is sing and then look at my boobies, yes. 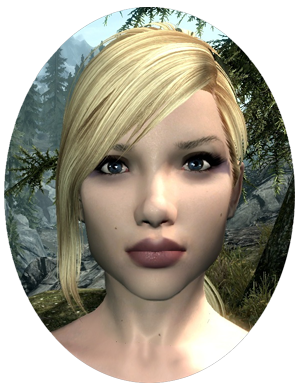 Description : Third from the four Marsoric sisters. She spent her childhood with Malicia and Tryade before being separated from them at the age of 15. She became a somewhat dreamy and naive blonde ranger, wandering across Skyrim, living of her skills as a hunter, blacksmith and alchemist.
Despite her remarkable natural beauty, she isn't satisfied by the place men would give her, and aspires to alternative ways of life and recognition as a warrior.


More info in her character sheet. 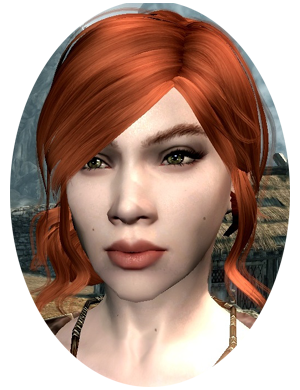 Short description :
Malicia : « first I wanna say that the only thing tiny here is the description, got it ? I'm the most beautiful, intelligent and strongest girl of my time, yes. Only thing is that everyone doesn't always notice, uh. They're very silly.

I'm second of us Marsoric sisters, because Tabi is older you see. I can do magic, alchemy, and make myself very discreet when necessary. I like guys, noodles, being pretty and to make spells, yes.


If you're a guy and you're good-looking too, you can read my character sheet. » 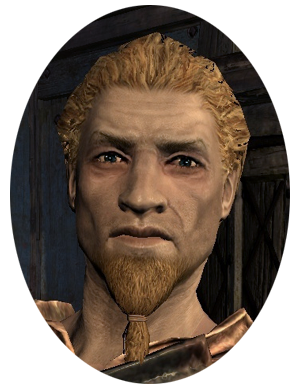 Description : Young Nord decently skilled in combat, Jon is a man torn between his duties and wishes. Torn between an authoritative father, wielder of the Battleborn name, and his wish to become Skald at Solitude's academy. Torn between his name, and his childhood love Olfina Gray-mane, from a politically opposed family. Until a young Breton stranger came around and made his convictions flicker...

Malicia : « He is not flickering okay ? He just needs time to figure out he must forget his Olfina cow, yes. 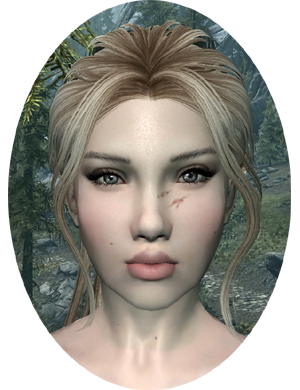 Description : first born of the Marsoric family, she didn't share the same mother than the three others, and was raised apart from them. Though proficient with complex destruction and healing spells, her constitution stays the one of a trained yet frail women, leading her to major issues at the start of her adventuring life. Having found her sisters back in Skyrim, she met there a huge Nord named Benor, which became a precious ally, and an undisputed lover. Until the wheel of fate challenged them both... 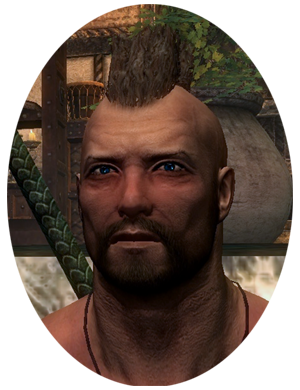 Description : A good-willed warrior who spent most of his life growing, brawling, loudly chatting and defending his kin in Morthal. Until he met a frail Breton women who brawled so poorly he almost lost his jaw laughing : Tabrielle. He quickly saw that despite her obvious weaknesses, she shared the same determination and ideas than him, and joined her. First as a companion, then, as a lover. Benor is tall, even by nords standards, and built like an Hercules. His stunning constitution hides a honest and loyal heart directed towards his fellow men... and more and more towards his idealistic lover, Tabrielle. Description : A fierce Forsworn force leader, famed for his ferocity. Fanatic zealot of the wild gods, he is known to burn, kill, salvage or rape anyone or anything opposing his cause, wether it'd be Nord, Breton, or even Reachman (if he thinks they're betraying their faith). Now coordinating Forworn assaults from the remnants of the Kolskeggr mine,  strange rumors linger about him having thrashed the assaults of high numbers of Markath's soldiers, without even getting a scratch. So much that the Reach's Nords started fearing  that some « evil eye » might protect him, and now keep their troops behind their walls, exposing the defenseless localities of the periphery. While the moderate leaders of the Forsworn regard him as a dangerous wild card at best, he's seen as the untamed hand of the old gods by many shaman-witches and hargravens. A hand that may eventually crush the daunted strategists of Markath. 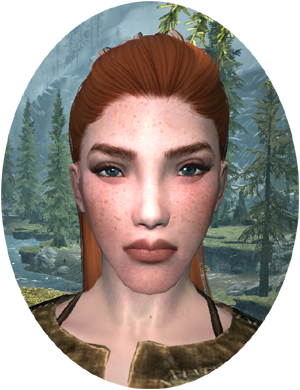 Description : youngest daughter of the Marsoric family, she was only 13 when their sole parent disappeared, separating her from her sisters, Malicia and Cecilde. Nonetheless, the teenager was already gifted with strong will and temper, and her dedication and tendencies to undergo trainings usually reserved for males were noticed. This brought her to learn combat and military professions, later allowing her to be employed as quaestor by the legion despite being simultaneously a knight. Her martial knowledge and constant training allowed her to gain an impressive musculature, and while still overpowered by the strongest men, her surprising speed and stamina largely make up for it. She is currently in couple with the mercenary Belrand, with whom she created the adventurer group « The Two ». It later became « The Three » with the addition of Serana, the trio being notoriously efficient in the hunt of unnatural creatures, including vampires.

Age : according to Tabrielle she should be in-between 635 and 1531 years old, but only Serana knows for sure 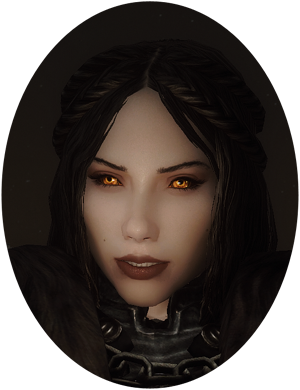 Description : only child of the ruling lord Harkon and lady Valerica, she was turned at a relatively young age by being offered to Molag Bal himself. While the ritual allowed her family to become pure blood vampires, creators of the Volkihar bloodline, a later occurring conflict between her two parents led her to be imprisoned in an underground prison for most of her unlife. Her vampire powers were greatly affected by this, causing her to lose the ability to transform into a vampire lord, and weaker physical strength than a vampire that ancient should normally possess. Still, her unbelievable close-combat speed, potent spells, and enforced stealth abilities make her a truly formidable opponent, which few can withstand and live to tell the tale.

Lots of vampires discovered this at their own expense since she joined arms with « The Two », a band of adventurers in whom she admired the courage to fight for the greater good. And while she seemed durably traumatized by her turning, she started showing some unusual behavior towards the woman of the group, Tryade Marsoric. She also was acquainted with Malicia, and while she's still adjusting herself to the wackiness of the redhead, that friendship deepened her bond with the family.