Hi guys ! Another Chronicle is in preparation right now. I'm slowly (very slowly =o) completing my goal to offer my girls a chronicle each, before possibly going into multi-character episodes. But all of this takes time, so I' figured it could be nice to release character sheets in between each comic. D&D lovers, you won't be lost !


Name : « Malicia » Marsoric
Her complete real name would be Typhaine Elodie Gabrielle Marsoric. But as even her relatives called her Malicia since her early childhood, « Malicia » stayed as her firstname while « Typhaine », almost exclusively used by her father, got forgotten.
Gender : female
Age : 29
Race : Breton
Birthsign : the mage Malicia's looks most remarkable feature is her deep, yet tending towards orange, red hair. She conjugates it with some malicious and lively green eyes, despite her being somewhat myopic. However, while her face demonstrates some natural yet carefully groomed beauty, her positively skinny and minute body lacks of the generosity that would make men spontaneoulsy gaze at her shapes. While her proportionally exquisitely slim waist unquestionably makes up for it, she's hasn't the blessed forms of her younger sisters, and does not appreciates to be reminded about that. Though agile and naturally silent on her feet, her feeble constitution lacks in strength and in stamina. Despite this, she compensates in agility and flexibility what she lacks in strength. So while being easily overpowered by men (and even some women), she had no problem beating them in acrobatic disciplines, and can temporarily out-speed them both (though she cant rely on that due to her lack of stamina). Caring more about her appearance than about vigor, Malicia's constitution is weak ; but not taking her intelligence in consideration would be dangerously underestimating her.

Alignment : in between Neutral Good and Chaotic Good. Malicia has a kind heart, and will act with good intentions most of the time. That being said, though she can understand rules and laws... she won't feel forced to respect them at all times. Specially if her target is « meany » or if it's the easiest way around.

There is no denying, Malicia is highly intelligent : behind her playful green eyes hides a powerful and fast mind. While her childish language, atypical behavior, and partial understanding of otherwise rather common concepts do somewhat mask that trait in ordinary life, her natural ability at learning and handling complex mental exercises were not mistaken by her teachers. So, while somewhat wacky, she was labelled as intellectually gifted since the age of 6. Her dexterity also extends her talents to stealth and archery, though her myopia prevents her from getting as effective as one would expect : though agile and frail, she's still mainly an intellectual.

That being said her already quite singular behavior is hindered by her addictions, getting her marginalized in some domains. She lives alone, does what she wants, works on what does interests her. And so the redhead kept a somewhat childish behavior (she likes games and challenges), which gives her easier contact with children, but somehow hinders her relationships with progressively maturing adults of her generation. This uncommon state of mind (not mentioning that she doesn't always felt like respecting rules and law), and her physical weakness made her more humble than one would thing, though she'll always affect otherwise. So she will most of the time display her favorite playful mood. Ever wondered how would look a mage with nearly as much courage as a fraidy cat ? Search no more : Malicia is the answer. Under her boasting outwards, the redhead is in fact a very slippery opponent, avoiding frontal battles by all means available. Those do include booby-traps, surprising stealth skills, conjured creatures, and astoundingly powerful mind control spells. If you try to catch her with hostile intentions and fail to prevent her fleeing, you're very likely to miss her track quickly, then end-up blown up on a rune, poisoned to death or frantically assaulting your own allies, provided you survived her 7 feet tall atronach.

Caught off guard, Malicia is nothing more than a frail woman. On her guards, she's the worst headache ever. Malicia is an intellectual, and a mage, so most of the time she's wearing mage robes, with a light hood, thin boots & gloves. That being said, she isn't prudish, likes to catch the eye, and wants to stay seductive : her neglected hair strands are more carefully groomed than they look ; her lack of bra is in fact thought to increase « movements » likely to draw a man's attention to her ; and her intimate & armpits hair are kept under vigilant control. Her knowledge of alchemy has also been put to good use creating useful potions & bodily care products so that she's at her advantage when wearing a more feminine dress.

Malicia loves mankind. More accurately, she loves to have a kind man inside her, ramming her as if she was weightless. She loved that to the point that she started needing sex more and more often, and it was only when her craving started to be daily that she realized that she had become nymphomaniac. At some point she required several doses a day to satisfy her addiction, understood she lost control, and beginned to hate herself for her weakness as much as she liked giving-in to lust. Unable to refrain herself durably, she passed by a durable depression period, until she finally accepted her woman nature, and little by little managed to control her addiction instead of rejecting it. Malicia is very playful, and sexual affairs are no exception to her behavior. Being heterosexual, she loves above all straight bed vaginal sex (missionary position in particular). Nevertheless, her increased needs brought her to vary her experiences, and her curious nature opened her to different sorts of sex. Oral sex, anal sex, though they were only tries she had a glimpse of them all. However, her frail constitution got her brutally and helplessly gang-banged in the past, so she isn't comfortable with group sex, yet alone more uncommon practices...  Nor does she understands homosexuality, and even less bestiality. She just simply wants men she already knows before-hand to get to know her and her games even more intimately. ^^

Factions : Politically neutral. Unless directly solicited, Malicia interests for politics are near from zero. She considers she has enough problems directing herself, yet alone give conduct to others. Seriously ! — College of Winterhold — Thieves' guild.

Religion/philosophy : theist, believer. Malicia believes in Akatosh, father of the nine divines. Very occasionally, she attends religious services. But to be honest, she doesn't thinks Akatosh cares about the way she uses her pussy and with whom.

Second born of a sisterhood of four, her childhood and early teenage years were peacefully spent in a recluded part of Hammerfel with her two younger sisters, under the strict and vigilant watch of their father Gabriel Marsoric. She would remember him as a severe looking old man, with strictly cut blatant white hair, and inflexible blue eyes. While she never got to know their mother, Felicia, she greatly admired what little her father could tell about her, and ended up being nicknamed Malicia by most of her family. Moreover, the small neighboring forest was inhabited with all sorts of strange, friendly and wacky creatures : talking animals, undefinable energy forms, and even an incredible giant pillow whose main objective in life was to get « wealthy and rich ». All this wacky environement, spontaneously accepted by their infantile minds, prevented the sisters to feel too acutely about their absent mother.

She developed a swift and bright intelligence under those influences, and naturally began studying magic, alchemy and enchanting disciplines. Her playful and slightly mischievous personality also started to affirm itself, while she entertained her two younger sisters with a probably excessive amount of jokes, pun and humorous traps. That intellectual yet kidding attitude progressively distinguished her from her sisters : Cecilde, blessed with a blond voluptuous body but with a dreamy, naive and maybe less bright mind ; and Tryade, a redhead tomboy constantly hardening her muscles via demanding combat training. Typically, at the age of 15 Malicia was the kind of girl who would steal 12 years old Tryade's hair tie (or clothes) while she was doing push-ups sets, to hide them in 14 years old Cecilde's closet as that one was applying make-up.

That happy childhood in Cyrodiil abruptly ended at the dawn of her sixteenth year, when it was discovered that their genitor, Gabriel Marsoric, was in reality the very feared 400 years old magician Gabriel Daresort, also know as Triam, accused of forbidden anti-creation experimentation on mortal souls and living creatures, possibly replicating the threats of the mysterious dwemers. Their father and the strange lively creatures suddenly disappeared, leaving the three disoriented teenagers on their own. The local authorities declared the daughters innocents from their father's sins, but theirs father's belongings (including the family's house and a comfortable wealth) were confiscated.

After a period of observation and examination, no sign of abnormality being detected among the three children, it was decided it would be best to separate them, while still allowing them to pursue their scholarship or studies as wards of the state. Malicia was placed under the authority of a local magical organization, and successfully achieved a degree in general magic. She was advised by her tutors to further continue her studies, at the cost of paying her debt towards the society as en employee of that same institution. So Malicia was given tasks, and in exchange earned a living and studies as a wizard. The tasks progressively turned into missions, and the missions into travels. And that is how she began her career as an adventurer, and got exposed to the hardships of the world. This is also why she traveled more than her younger sisters, from Morrowind, to Cyrodiil, where she met the proficient illusionist Illuvanar, who taught her the first grades of specialized illusion. One day she received a letter from a certain Tabrielle Marsoric, from Skyrim, informing her that her youngers sisters were safe and sound in the nordic land, and that her family's reunion was at hand if she wished it. She took the first convoy for Whiterune, and was delighted to meet the welcoming smiles of Cecilde and Tryade, now full grown women. But as they were hugging and loudly chatting and laughing, a hooded shape not much taller than her approached, and unraveled her face : under their shocked eyes, a breton woman with silver eyes and white blatant hair took their hands into hers. She was Tabrielle Marsoric, their half-sister. She had the same hair as their father. Malicia was overjoyed : she wasn't the only Marsoric daughter with a flat chest anymore !

Afterwards, it wasn't long before our playful redhead obtained a journeyman position in the College of Winterhold. Finally united, the four sisters continued their lives in Skyrim. Until one fateful day, Tabrielle was erroneously caught crossing the frontier, by a surprising amount of imperial soldiers... Due to the infamous Resdayn spreading slanderous accusations about her sexuality, Malicia finally accepted to present us her horse (her real one) : 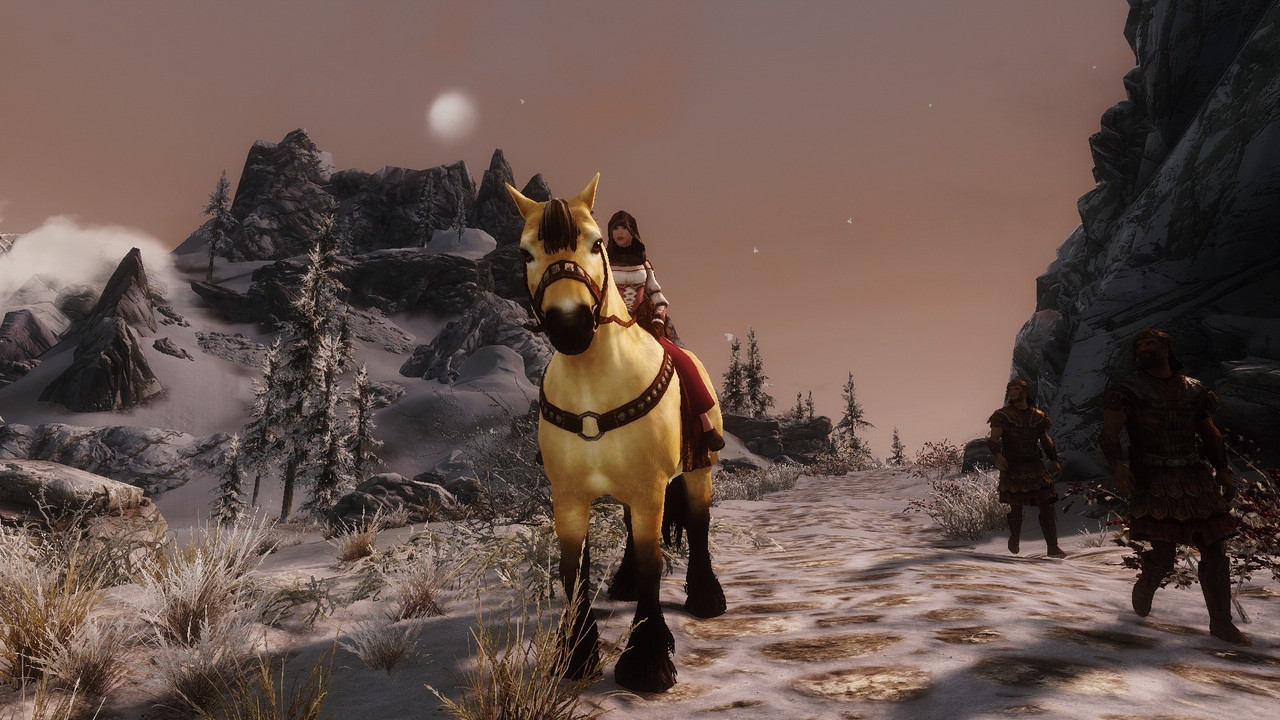 Malicia : « That's him. He doesn't talk 'cause he's a horse, but he's still very intelligent, yes. 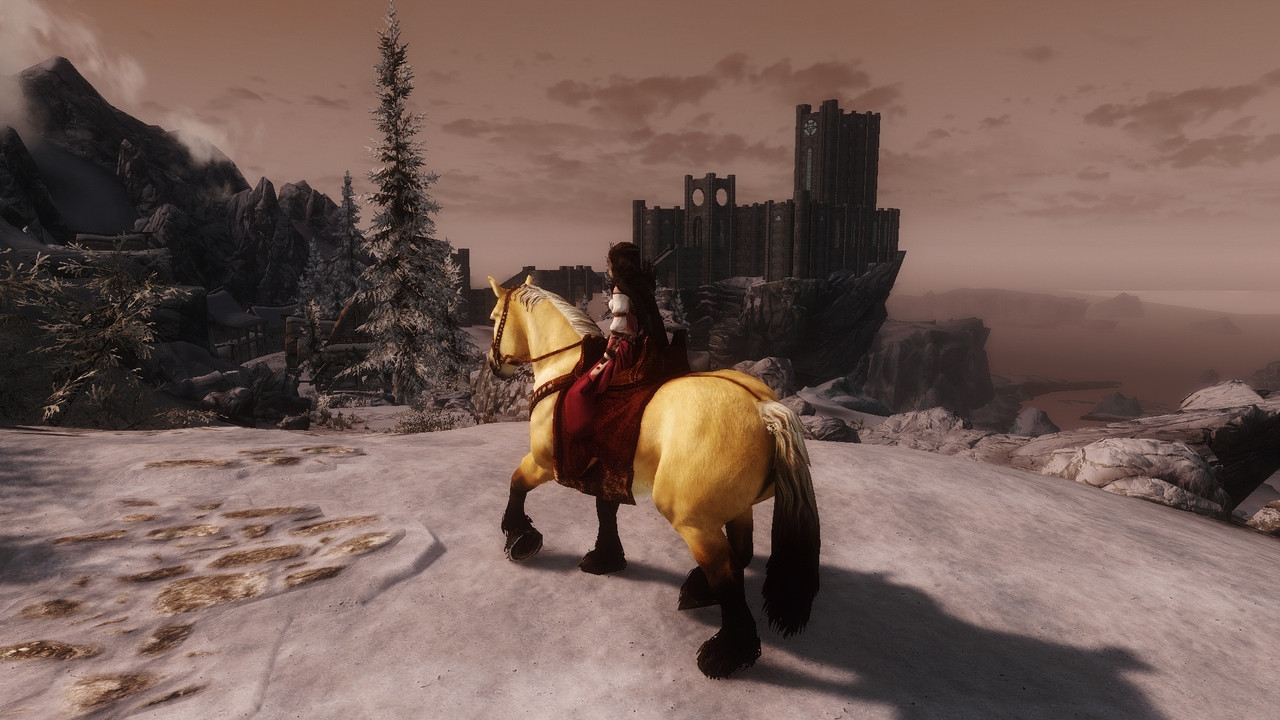 He wears only the best saddles, so he can be pretty just like me, you see ? 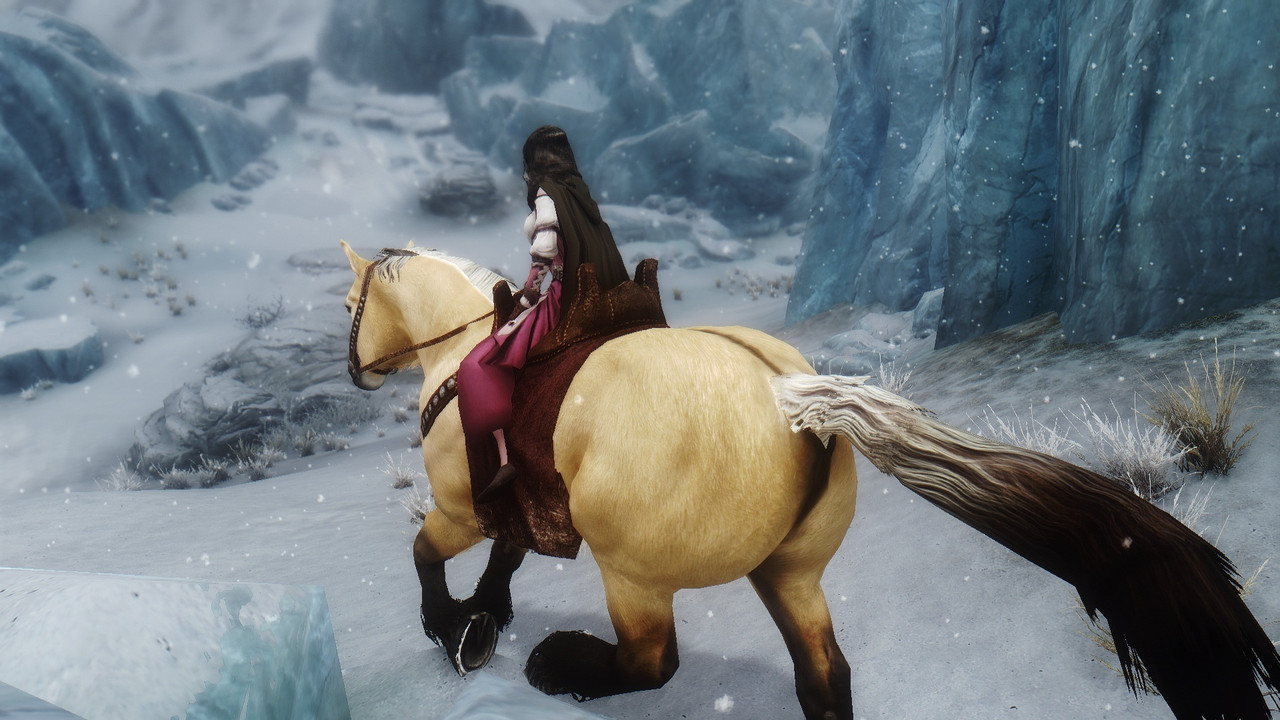 He can galop very fast ; much faster than Grisendre, Alfsigr or even Noircrin, uh. That's because he wants to be the best horse of his time. 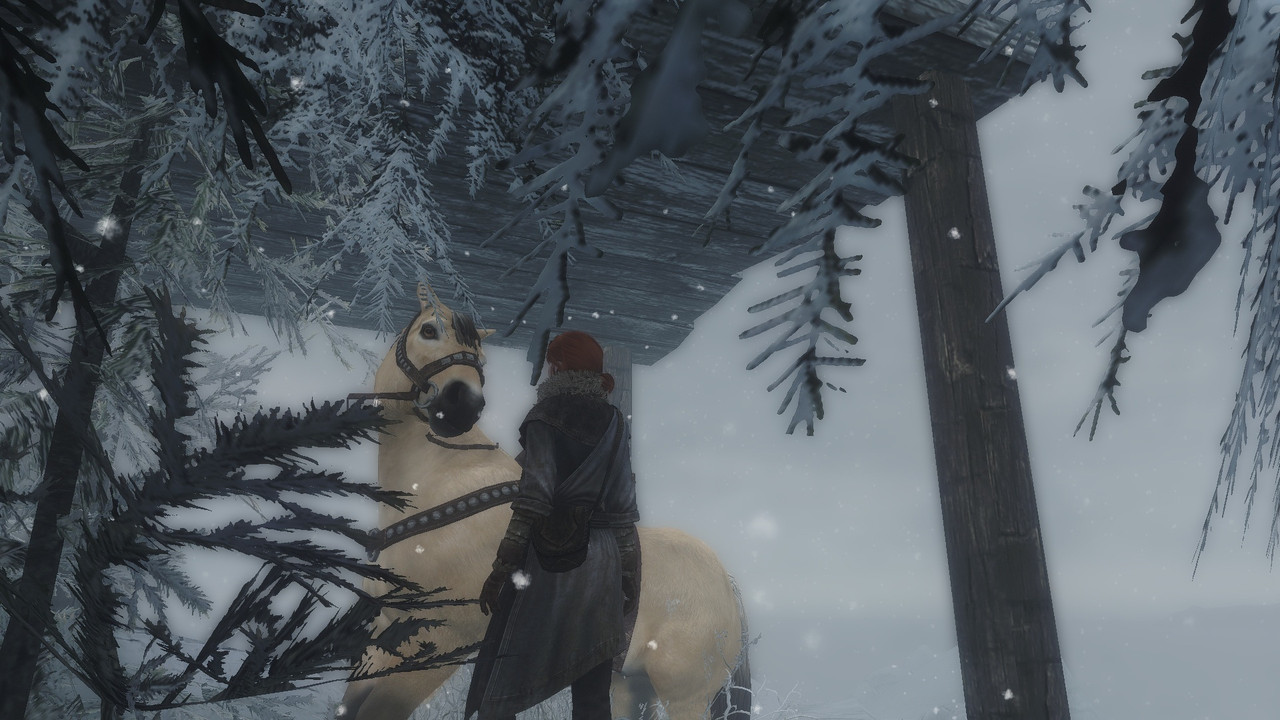 And of course he likes me very much, 'cause he likes to be brushed on the back and stroked on the head. Plus he looks if I've brought him carrots or not.