Have you ever wondered what your characters were doing while you're not there ? Well, search no more : they're messaging each other like crazy ! Using your own account ! Talk about an explanation to Loverlabs' slowdowns...

This is the first installment of non chronicles entries, featuring standalone side stories not directly related to the current main events. Compared to current Mourning White's chapter 4's storyline, this is happening several months afterwards ; and is partly in form of letters.

If you need to refresh your mind about the characters, or want to discover other story blogs of LL, take a look at The Small Library.

Credit and thanks to Resdayn for his kind participation.

Inspired from an original idea of : Gwynolda. ^^ 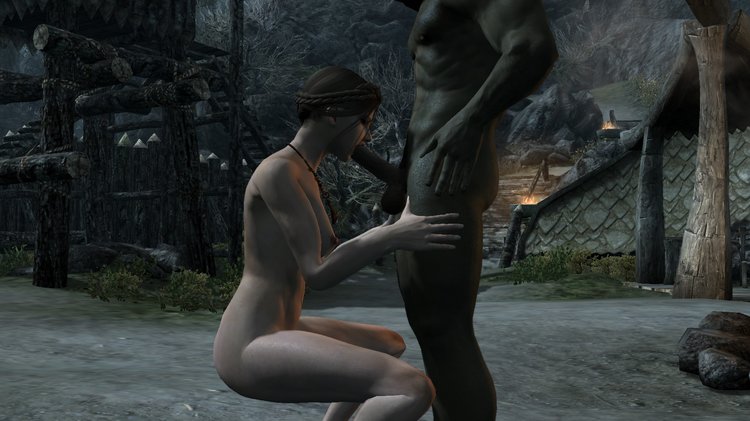 
See this is how you handle an orc sword, now go learn it Malicia

. They have big and long swords good for practice for this size ; there are nords who have this big so you need start get ready. Sometimes if it goes to the ass, you might need some restoration spells, but that's no problem for you right ?

I wait a pic in your answer where you are a good girl and do the homework that your favorite Reseacher gave you. In the pic I expect you to use your mouth as a sheath for an orc sword.

Sincerely your Friend and fellow swordmaster First thing I want to say it's that I'm glad you wrote me something. I like when people write me, it makes me very happy, yes.

But I have a few questions for you, yes :

— Men are often dirty, 'cause they're not used to be neat and tidy like us, you see ? Sometimes they even have dirt on their pee-pee. What do you do then if you've just brushed your teeth and they want to put their dirty pee-pee into your mouth ? It's completely yucky !

— I don't have any orcs friends, nope, 'cause they're ugly. But I have a very good nord friend, and I often go honey-honey with him, yes. Maybe I could ask him ?

Also, why do you want a picture ? Aren't you supposed to know all that ? Why would you need a drawing ?

Kisses on the cheek,

Its good to hear, you use your mouth too, using Dibella's arts as they should.

Malicia, if you put a pee-pee in your mouth, you need also to touch yours too, its helps enjoying better. I learned this from the scrolls in the temple. Its also helps you learn how to cast when you are silenced.

Also you can ask them to use their mouth on your pee-pee, its mutual pleasuring, big part of Dibella's teachings.

If you have to chance ask them to bath, or put a ward spell in yourself in case of safety if the pee-pee is too dirty.

Charm spells help to make them do what you want.

If they want to put it, when I don't want, I use an illusion spell and put them into a nightmare.

Orcs are good friends of mine, I saved a few ones during my walking, they were nice...

Their sword is big, which is good for stamina training, even if they are ugly. The sword helps forget that. Anyway according to Dibella, a lot of things are beautiful, even them.

I want see how the expert does it, that's it.

I've tried what you said, but it didn't go as expected ! It's very hard to be an expert sometimes, yes.

I'm very glad you did your homework.

You were simply too good for him, you mastered already the technique, thus Jon was defenseless and cummed too fast. It's not your fault, it's the nordic girls who don't know how to do it, Jon was not prepared for this.

Pee-pees can be usable again after a little time, don't worry it is not broken yet.

See Malicia this is a good training to learn how to use magic, or to shout without your mouth.

To became a better adventurer you need trainings like this