Hi folks, we'll be back with Kirsti's adventure soon (I'm a little distracted with Star Citizen 3.17's public test right now). But in the meanwhile, a commenter on Reddit asked about turning Guards Armor Replacer into a standalone mod. I actually did just that much earlier in my modding effort, and under normal circumstances I'd just share my converted plugin. However, this mod has somewhat closed permissions that restrict sharing edited versions, so instead I offered to document the steps to do this DIY. I'm presenting this as a mini-case study since I imagine other folks could benefit from this or at least learn a few things about mod conversions.

First, let's take a quick survey of what's involved with Guard Armor Replacer. This mod has a few characteristics that will inform how we convert it:

This really defines the course of action we're going to take. Because we have a plugin, a lot of the foundational work is already present for us - we just need to make the leap to standalone records. Likewise, since the art assets already have their own folders we don't need to change any of their file paths.

We're going to start by creating a working file for the armor items themselves. To do this, we want to find all the vanilla ARMO and ARMA records in the file (the ones that start with 00) and move them to our working file. We'll do this by going into each category, highlighting all the vanilla overrides, and choosing "copy as new record into file". 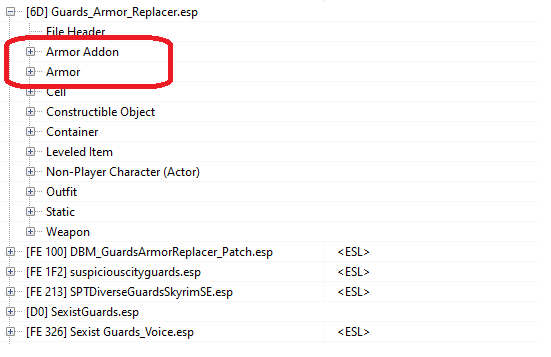 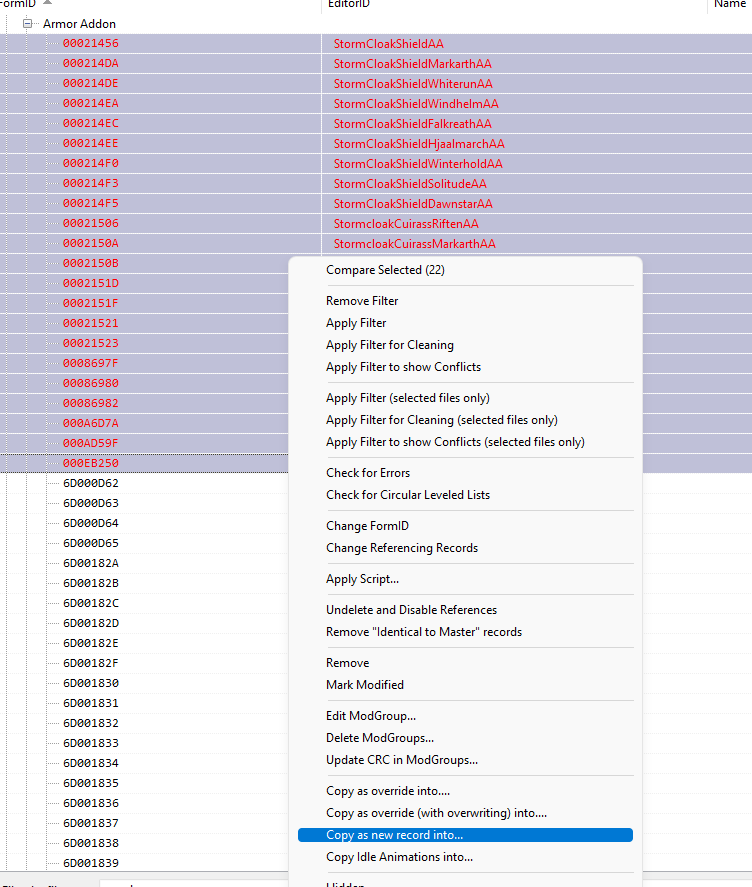 You'll get a dialogue box asking you if you want to change the prefix or suffix of the records. I was a little less experienced when I did this, and in mine I used a prefix as you can see below. However, I actually recommend a suffix as it'll make data entry easier. So instead of GAR_ArmorGuardsShieldRiften, I recommend aiming for something like ArmorGuardsShieldRiften_GAR instead. I'll touch on why this is helpful later.

If you have patches that are altering the armor entries at all, such as adding WACCF keywords or whatever, you probably want to use the patched version of the entry for your working file rather than the ones in the main replacer file. It's a little extra work, but that'll ensure the edits all get forwarded to your new standalone version.

Now that we've isolated the vanilla armor records into our working file, we need to rewire them so they don't just reference back to the vanilla armor add-on records. For each armor record, we need to go into the MODL (Model Filename) section and change the listed entry to the renamed ARMA. The reason I suggested using a suffix rather than a prefix is that here, you can just double-click on the existing MODL and tap the down arrow key until the _GAR (or whatever you call it) version appears. 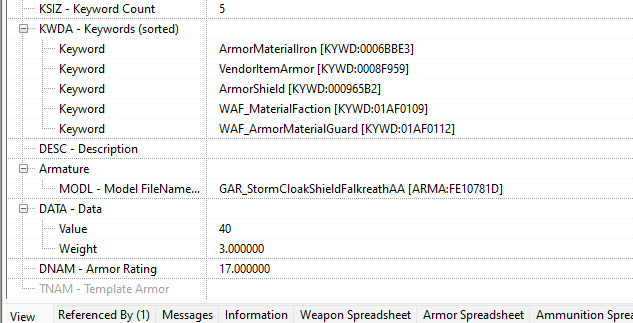 Do this for each of the Armor records you copied. You do not have to actually do anything with the ARMA records.

At this point, you can delete the vanilla ARMO and ARMA records from Guards_Armor_Replacer.esp which will prevent them from overwriting the vanilla armors.

Now it's time to make your first decision about how you want to proceed. If you want, you can copy the new standalone entries back into the main GAR plugin, or you can use your working file as a patch. Editing the original plugin will reduce the footprint in your load order, but if you use the patch option then your custom standalone entries will be easy to access and fiddle with in the future since they won't be 'drowned' in a sea of other records.

Either approach is fine, but I recommend using the working file as a patch.

If you do choose to flow the new entries back to the original file, here is what you need to do:

Needless to say, it's kind of easier to just use the patch approach.

Next you want to decide how you want to handle leveled list integration. One option is to have no integration - the mod would effectively become a crafting only/console only armor mod. That's fine. If you opt for this approach, just delete all the leveled item, NPC, and outfit records from the GAR file. This will remove all the changes made by this mod. You can also be more picky-choosy if you want to keep some of the changes by not others.

Whether you go for the nuclear option of removing all the leveled lists or you decide to go in more surgically, when you are done you'll want to use the "check for errors" button to make sure you haven't left any orphaned records (they'll show up as errors involving a null form ID). You'll need to go into those and either change them back to a vanilla target item or just remove the reference entirely.

The other option is to add the new items to your leveled lists. This will result in both versions appearing in the game world, but it does require a bit of work. Basically, for each of the new standalone versions, you are going to want to create a leveled list that includes the new standalone version and the original vanilla version. Then you can replace the vanilla item on the leveled lists with this sublist. Of course, that's the most generalized approach - you can always go in for a more nuanced solution if you want. 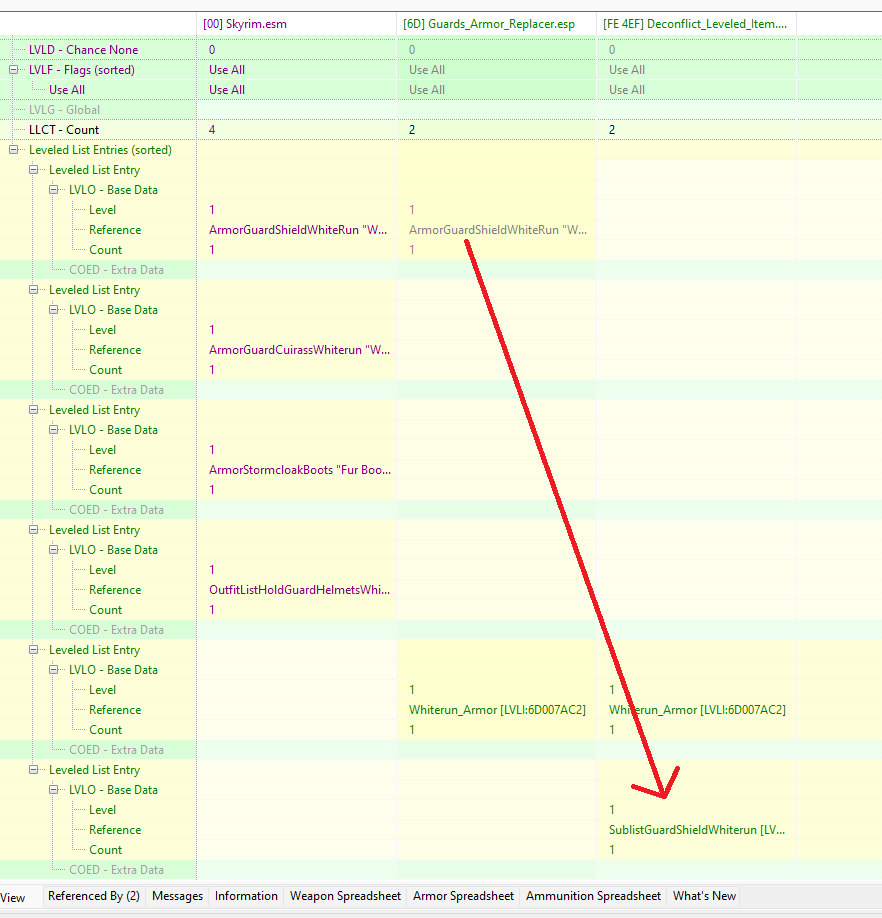 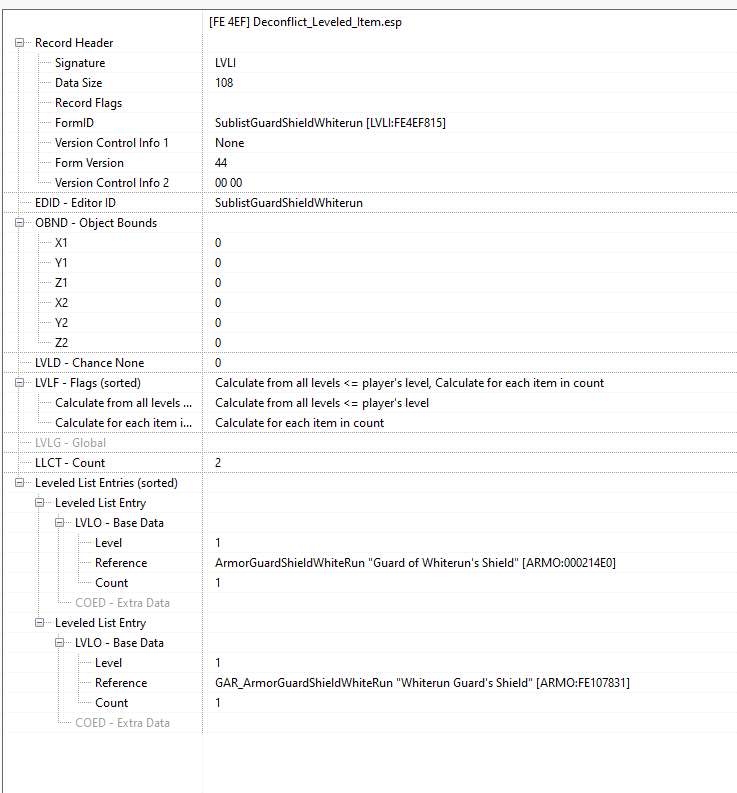 Getting Crafting Recipes Set Up

GAR does not provide crafting recipes "out of the box". Additionally, the vanilla override items rely on vanilla tempering records and will not have tempering options if you do nothing. In theory, you could use the same procedure you used for the ARMO/ARMA records for the tempering recipes to add tempering, but that may actually involve a lot of work as you look up all the tempering recipes in the main Skyrim.esm. And it doesn't really do anything for crafting - to say nothing of enchanted versions if you want those.

Instead, I recommend getting Automated Leveled List Addition, an xEdit script that generates new leveled list, crafting, and enchanted item records. Using its recipe module (and optionally, the enchanted version module), you can pretty easily populate all the missing recipes. You can also use this on the newly-added armor items to create crafting recipes as well. Finally, if you opted to totally wipe out the leveled lists, you may want to use the leveled list addition module for the new weapons added by GAR - unless you also want them to be crafting only.

If you opted to keep your working file as a patch, at this point you probably want to add an ESL flag so it doesn't eat up a full-size slot in your load order. You should go into the game and test the patch to make sure it's working, and also test any deletions you made from the main file to ensure those items aren't impacting your game anymore. Either way, if you previously had the unmodified version of GAR installed on your game, you'll need to start a new game or else at best you'll run into naked actors or warriors with no weapons from time to time, and more likely you'll start to suffer creeping saved game corruption until your game becomes unplayable.

So that's, in a nutshell, how to convert Guards Armor Replacer from a replacer mod into a standalone mod. You can use the same technique for almost any mod as long as it has the following characteristics:

Just always remember to use the "check for errors" function before you go live with your edits, since this kind of teardown work can create unexpected null references or orphaned records that require cleanup. I used this technique for Heavy Legion and for Vanilla Armor Replacer as well, and all three went off without a hitch. The most time consuming part was going through and reworking the leveled lists, but that's kind of a perfectionist thing that isn't really strictly necessary.

In the future, I may do a similar case study for mods that don't meet the two criteria above - I have a few mods like this on my back burner for integration... so stay tuned.