"What... is that?" I asked, pointing at the huge metal armature that perched on a concrete pad near the town gate.

Sturges laughed at that. "That's what I said when I saw it too. This is what your robot friend's been building since she showed up. Apparently it's basically a robot factory. I've never seen anything like it." 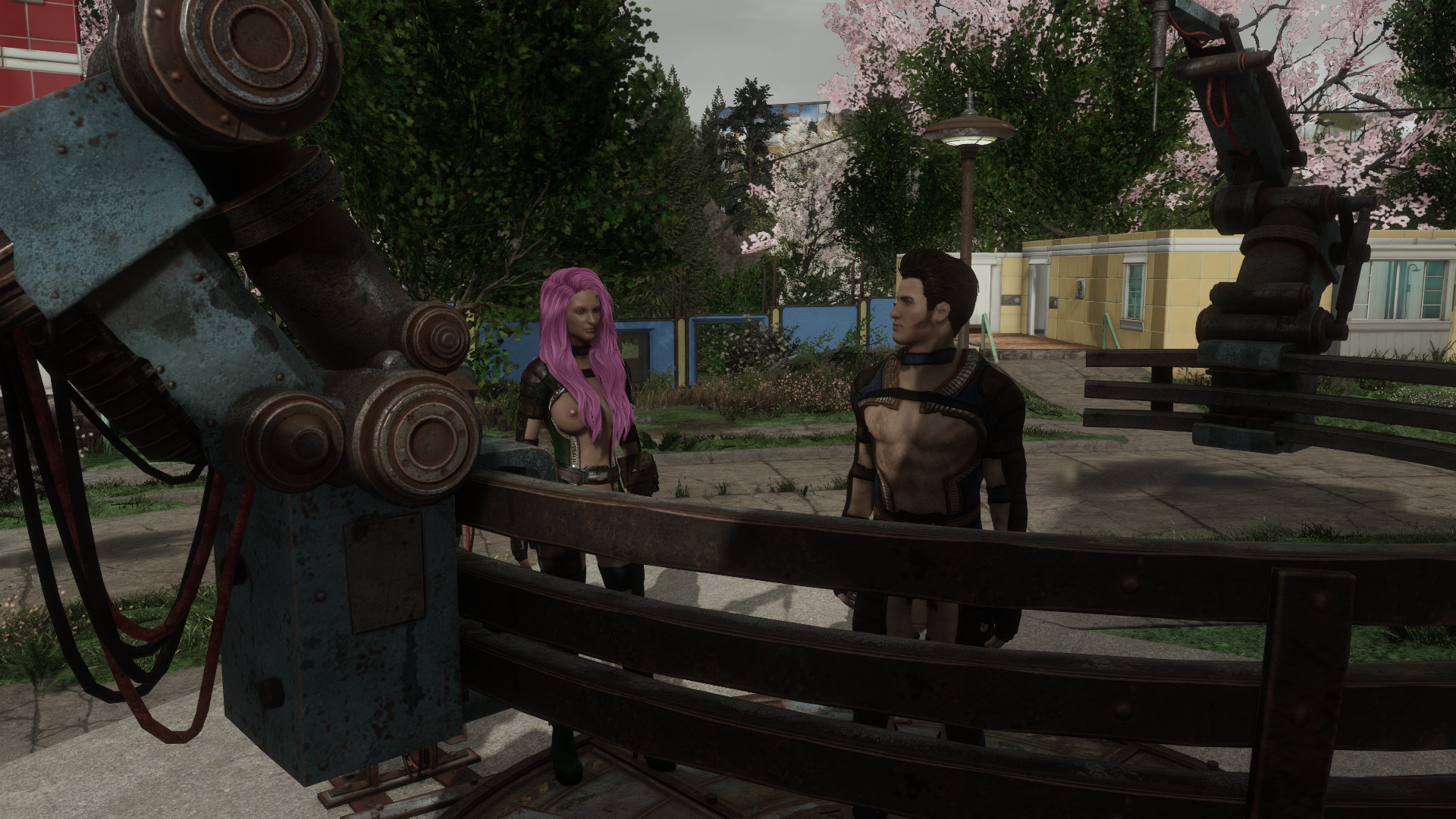 The sound of clanking metal feet against the pavement gave away Ada's approach, and I turned to wave towards her.

"Ada, this is incredible. How did you build this so fast?"

"Your settlement is equipped with an automated fabrication device," she explained. "I replicated the required parts and assembled the armature with help from your mechanic and your housekeeper."

"So this is the maintenance equipment you were telling me about?" I pressed.

"Yes. I will step into the service area. Please utilize the console on your right as I explain this equipment's function." 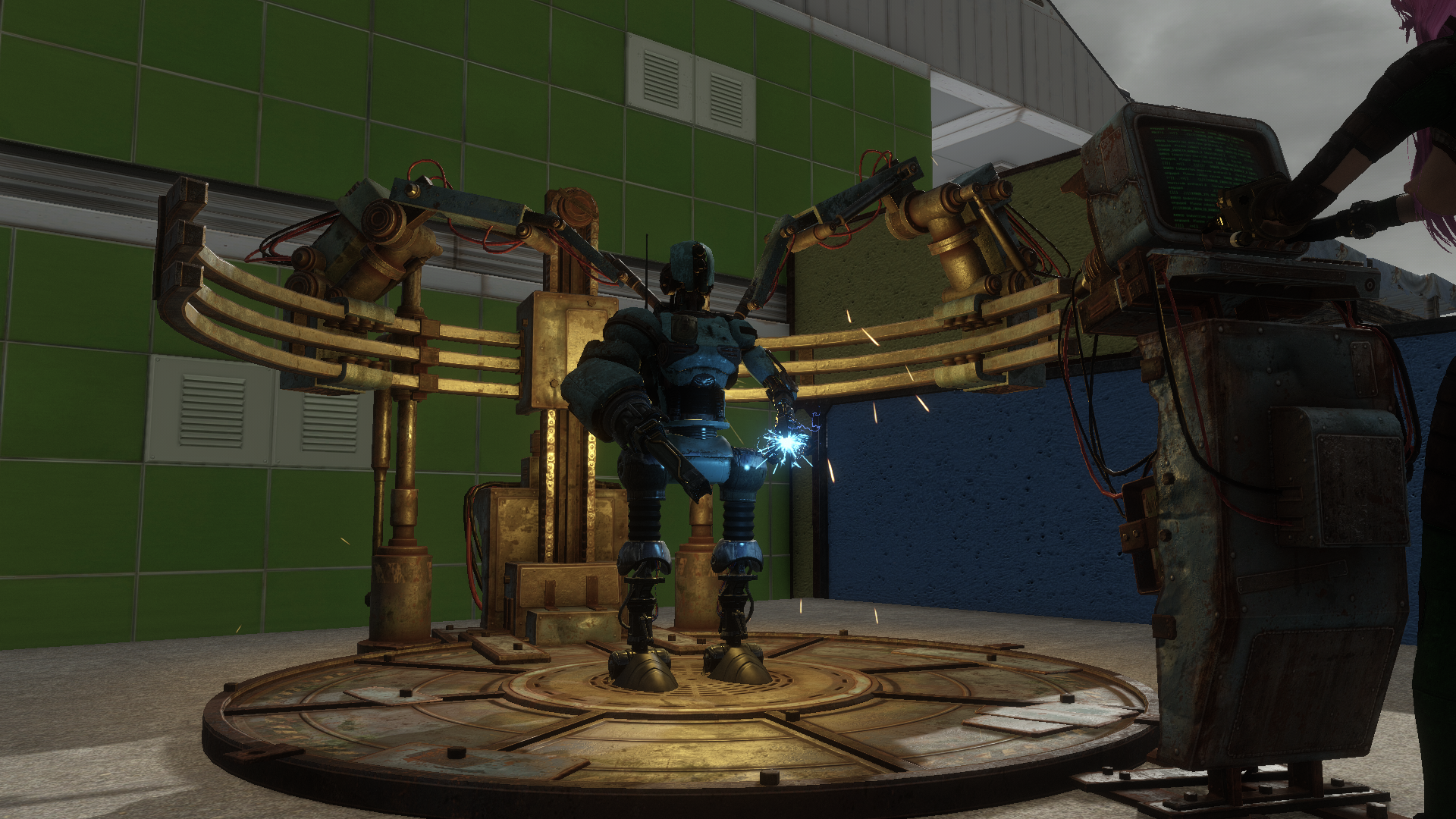 Ada proceeded to walk me through a diagnostic sequence using herself as an example. The interface was actually rather intuitive, and after a couple of pointers from the robot I was able to complete the rest of the sequence without prompting.

"OK, it's pretty obvious how having this will benefit you - and probably Codsworth also. But I got the impression from you that this could do more than just that."

"Yes, I will now leave the service area. You should be aware that I have diverted some parts from your workshop and already placed them in the storage area underneath the service area." After a moment she was clear of the pad and continued, "now, select the 'New Automatron' option on the menu. I will guide you through the process."

I followed her instructions and the mechanism whirred to life, extracting metal and parts from hatches surrounding the pad. Step by step, the system took a pile of junk and gradually transformed it into a vaguely humanoid shape.

"Good. You have assembled the internal structure. Now utilize the menu tree to select specific characteristics that meet your requirements."

I followed her instructions and worked through step by step. Many of the options were faded out, and Ada explained this was because critical parts were missing; however, she also added that it was possible to upload new schematics or to fine-tune existing ones. After I finished, I took a moment to admire my creation. 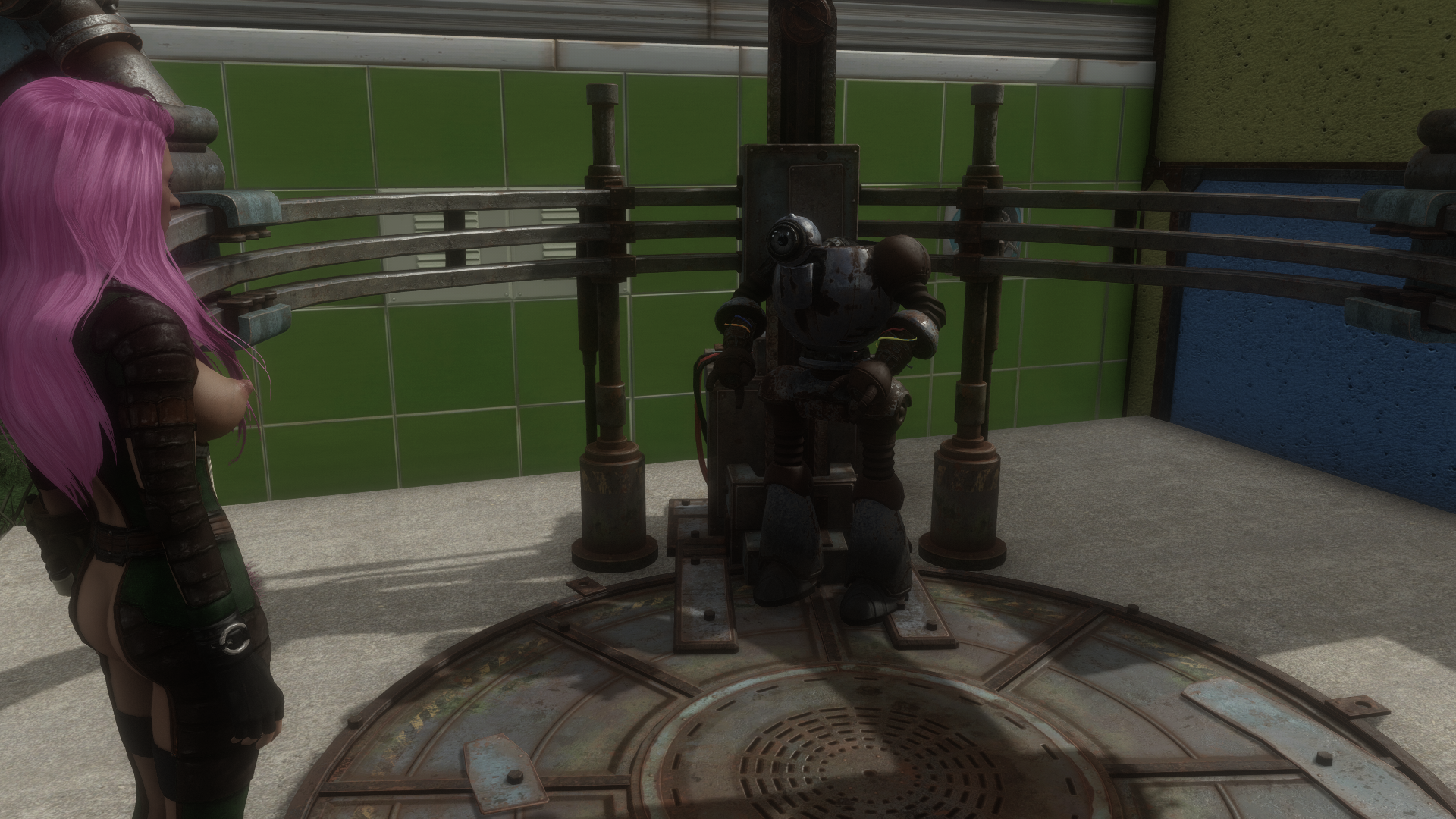 "Hmm," I considered, "he's not much to look at, but I never expected to find myself building a robot in my back yard."

"Under the circumstances," Ada consoled me, "your first effort is quite admirable. I am surprised however that you did not install any weapon systems."

"I wasn't sure about that. Won't that considerably increase the maintenance requirements?"

"Yes, that is true. However, I have observed deficiencies in this settlement's defensive posture, relative to its value to potential attackers. Therefore, the added operating costs are justified."

"Hmm, I can't really argue with you there. However, I'm actually going to assign this robot to Abernathy Farm. They don't have a wall like we do, so the extra firepower will be more important for them."

"That is a reasonable assessment. However, you should still enhance the defenses at the location as well."

I couldn't disagree with that, though I decided to table the matter for the moment until I could get the batteries sorted out. I took my new buddy for a walk around the settlement, then dispatched him to Abernathy Farm with instructions to report to Connie for work. 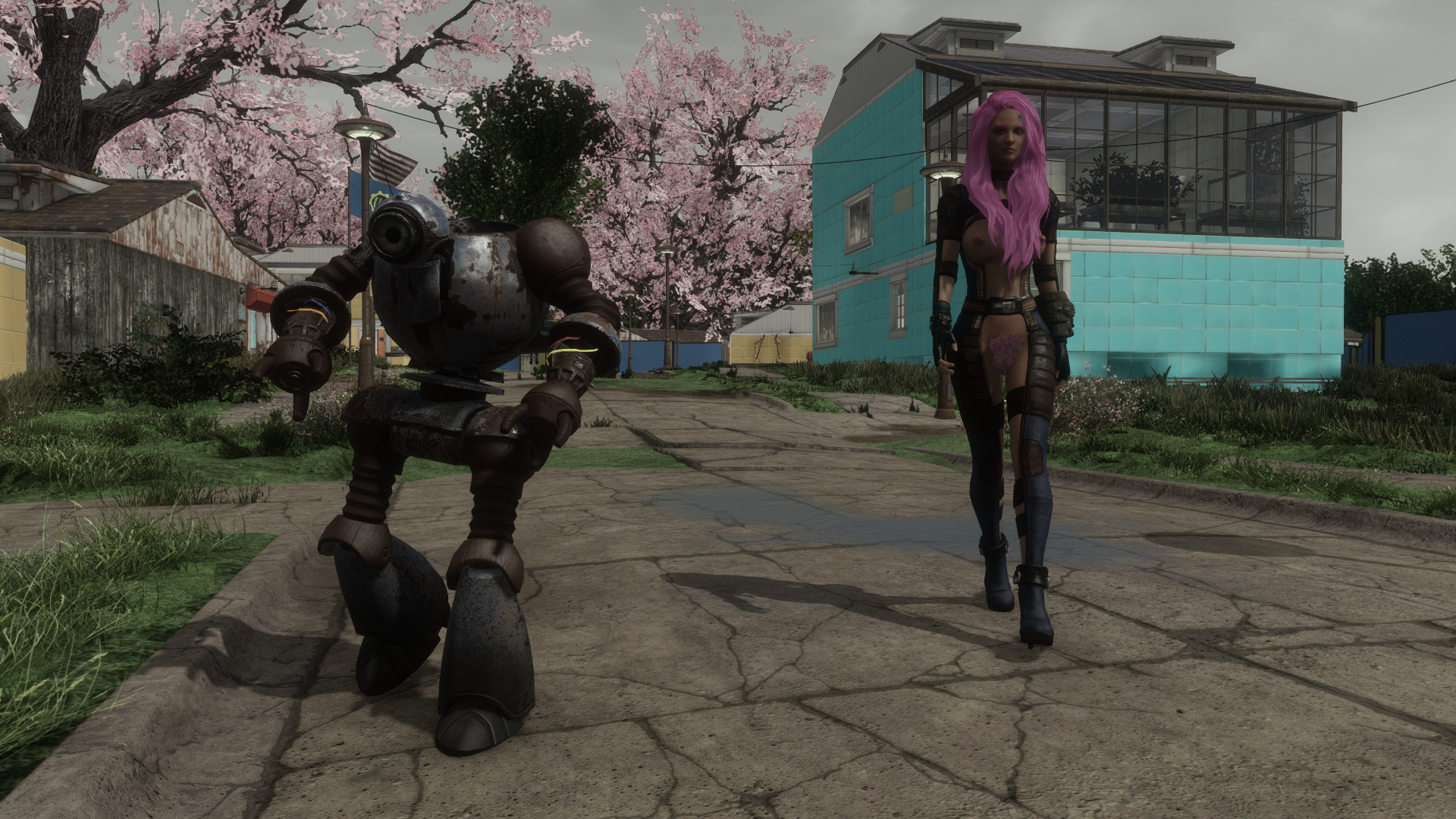 Sturges watched the robot's walk around town with obvious skepticism. "I don't know, boss, that thing looks like its seen better days."

"Yeah, I noticed. Ada, is there a way to improve the material quality and cut back on the corrosion?"

"Obtain higher quality materials. I can provide you or your settlement personnel with a list of requirements."

"Hmm. Alright, do that please." I turned back to Sturges. "Did you see the batteries I dropped off in the warehouse?"

"No... so you found more of those blue guys? Are they working?"

"I'm not sure. I think they need some work. Can you take a look at them? And where's Tracey at? Maybe she can help."

"Ah, sure. I'll head over to the warehouse now. Tracey's over by the bike. Actually, I think she's got something to show you."

I let Sturges and Ada go on their way then while I headed over to Tracey's garage space outside the Ainsleigh house. She was working on a tripod with oscillating gears and a machine shop clamp on top of it. 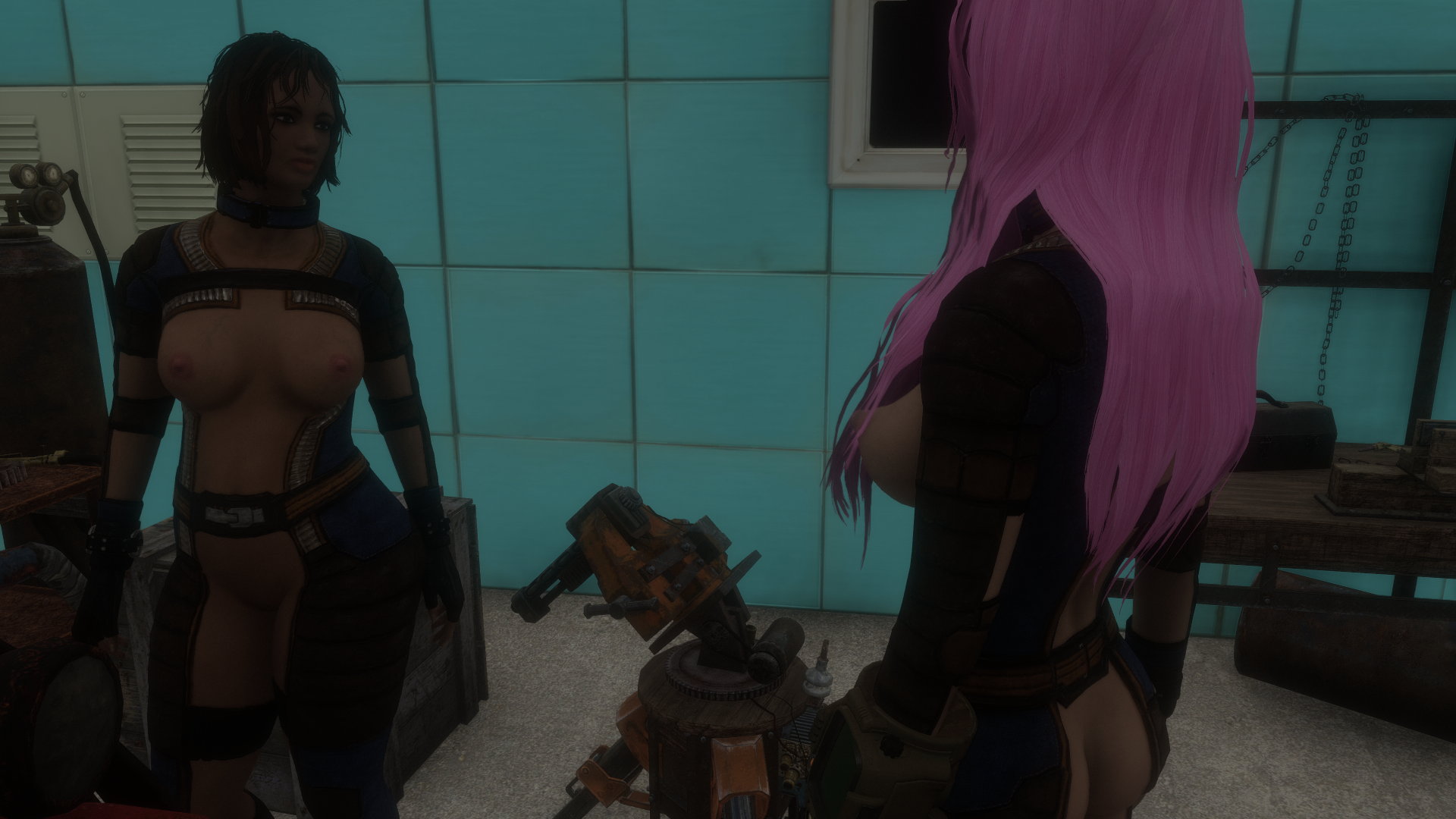 "Tracey, is that what I think it is?"

"If you think it's the sentry gun I keep promising you, you're right. This is the finished product - and I'm already working on a better version."

She explained that her first generation model was only really effective at close range, but she was working on a better version with more sensitive optics and a laser based on the improvised laser rifles Preston brought with him. For now though, she'd set up a template in the Workshop that could spit out all the parts to make one of these turrets in a nice convenient kit, ready to ship out to anywhere we needed some extra protection.

We talked shop a while longer, then we turned our attention to a practical application. We started out by fabricating some raised platforms that we could attach to the sides of the gate with long bolts drilled into the concrete, then we spun up a second turret kit and installed the pair of them flanking the gate. The power runs could have looked a little nicer, but it was functional and it was going to make it a lot more difficult for intruders to force their way through the main gate. 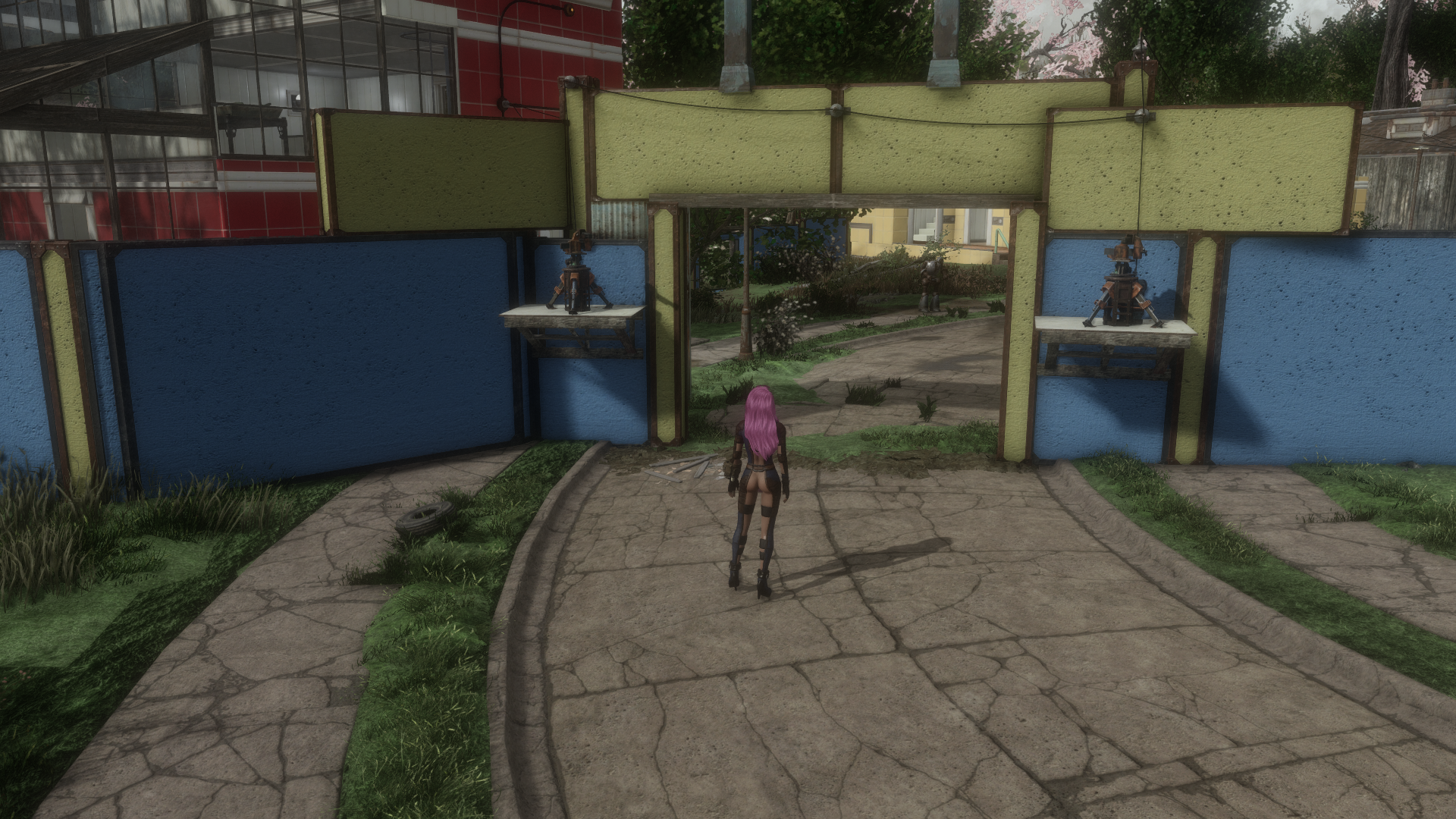 "You did really excellent work here, Tracey," I said. "I wish I could stay and discuss your plans for the long-range system more, but I have to get back to the farm before nightfall. Can you make, say, six more kits and store them in the warehouse? I suspect I'll be asking you to send some over to the farm soon, to say nothing of the Diner and the quarry."

I headed back to the warehouse to follow up with Sturges then, and I could immediately see that he was pretty happy.

"I take it the batteries met your expectations?"

"More than that, they're practically ready to use. All the damage is on the outside and on the interfaces. The way I see it, there's two ways I can go from here. If you want, I can have all three of them ready to use by tomorrow. But what I'd rather do is tear one of them down. Ada thinks she can program the Workshop to spit these out. It'll require a lot of materials, of course, but then we could make more if we needed them."

Ada interjected, "I cannot guarantee success from the first article. If you wish to gain this capability, you must be prepared to sacrifice all three batteries. Potentially."

I didn't have to think on that very long. "That's an acceptable risk. In the long run, being able to make our own power supplies is going to be critical to building up our strength."

With that agreed on, Sturges and Ada started peeling open the first battery - obviously this was something they were excited about getting to work on. I took a few minutes to say hi to everyone and briefly check in on them, then I started to make my way to Abernathy Farm.

As I got close to the farm, I came up short as a laser bolt sizzled through the foliage a couple feet in front of me. Almost before I had time to react, a gaggle of ragged looking robots charged towards me as more gunfire erupted from the tree line. I managed to cripple one of the robots with a shot to its thruster, but I knew a losing fight when I saw one, and I broke away from the other two and dashed for the farm. The bastards were in hot pursuit the whole time, but as soon as I got in sight of the farm, I started to get covering fire - I assumed from Lucy's high power rifle. 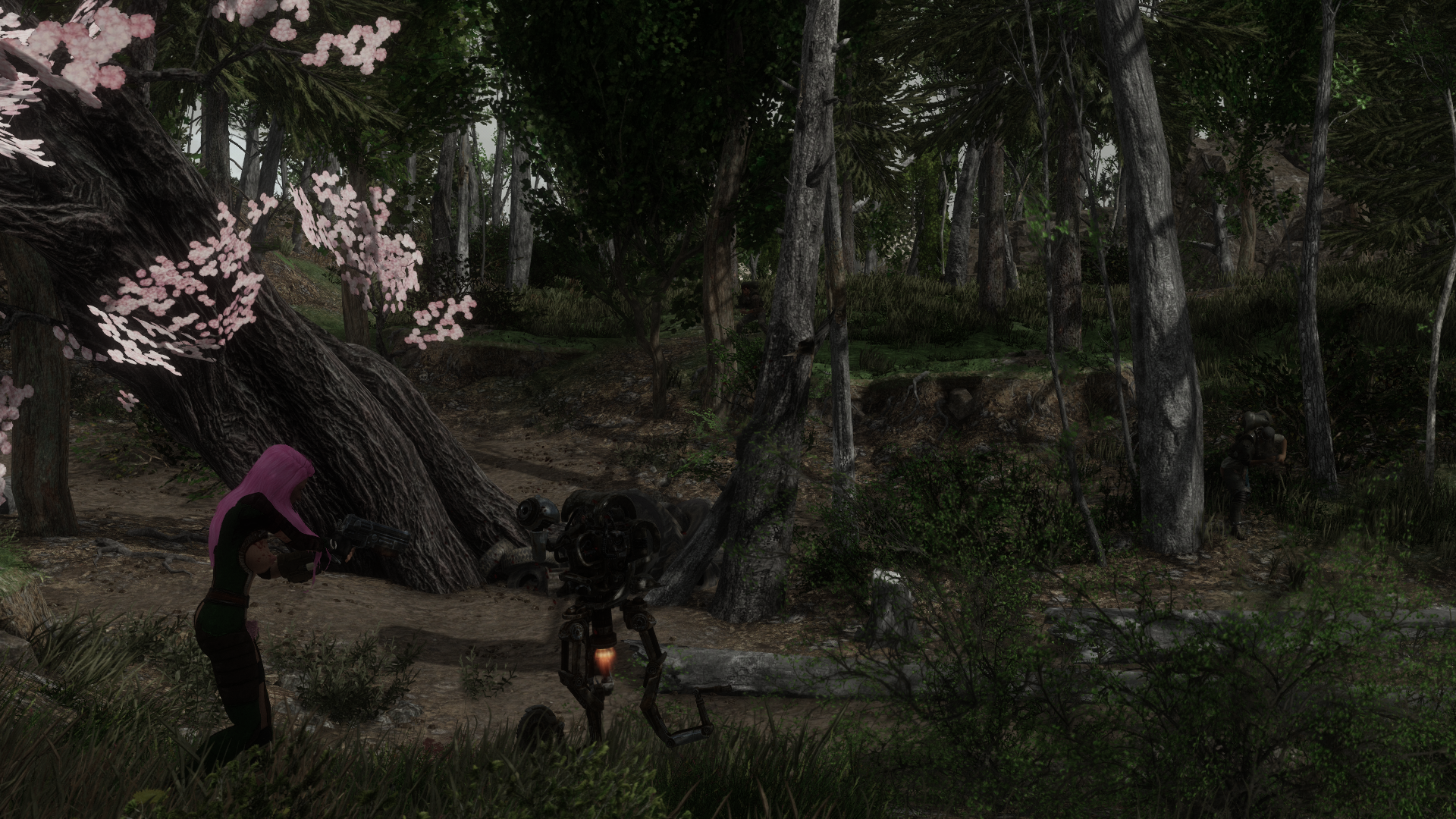 The robots didn't have any kind of armor and they went down pretty quickly, but the humans in the tree line held on a little longer. Eventually, the gunfire from their position tailed off and stopped. Under the cover of the Abernathy family's guns, I cautiously approached the position, but I found it abandoned. Whoever had tried to ambush me clearly hadn't felt it was worth the effort to go after the farm.

When I got back, Connie was all frowns and scowls. "I hope your trip went well, Charley," she said, "because we're going to need those defenses you've been talking about. We've got problems."

I decided not to do the mod diary first today, but I needed to do a bit of modding on the Fallout side nevertheless. I noticed during the Rust Devil encounter - and previously during run-ins with the Gunners - that the "bullet sponge" effect is starting to get pronounced with some of the more advanced human enemies. I understand why RPGs cleave to this kind of mechanic - but it demonstrates a fundamental lack of understanding of the intent behind the hit point systems in early RPGs like Dungeons and Dragons. Hit Points were always supposed to be an abstraction of toughness, luck, evasion, and skill, all representing how difficult it is to incapacitate the target. They aren't supposed to be some sort of linear gauge of how many bullets to the head it takes to kill a person. So when I shoot an actor in the face and I see their health bar go down by a tiny fraction, that is not conducive to my enjoyment.

Consequently, I downloaded Unbogus Health Scaling and Unbogus Health Ranges, then patched them into my game. These restrict some of the out of control hit point escalation on human enemies, and I'm looking forward to a better gunplay experience in the future.