We passed through Sanctuary on the way to Concord. I didn't have time to really stay and chat, but I smiled when I saw what Winter and the gang had been up to in my absence - they'd taken the Sanctuary Hills sign from near the Old North Bridge, cleaned all the vines and overgrowth off it, and remounted it above the main gate. I made a mental note to put some spotlights on it so its visible at night, but that would have to wait for some other time. 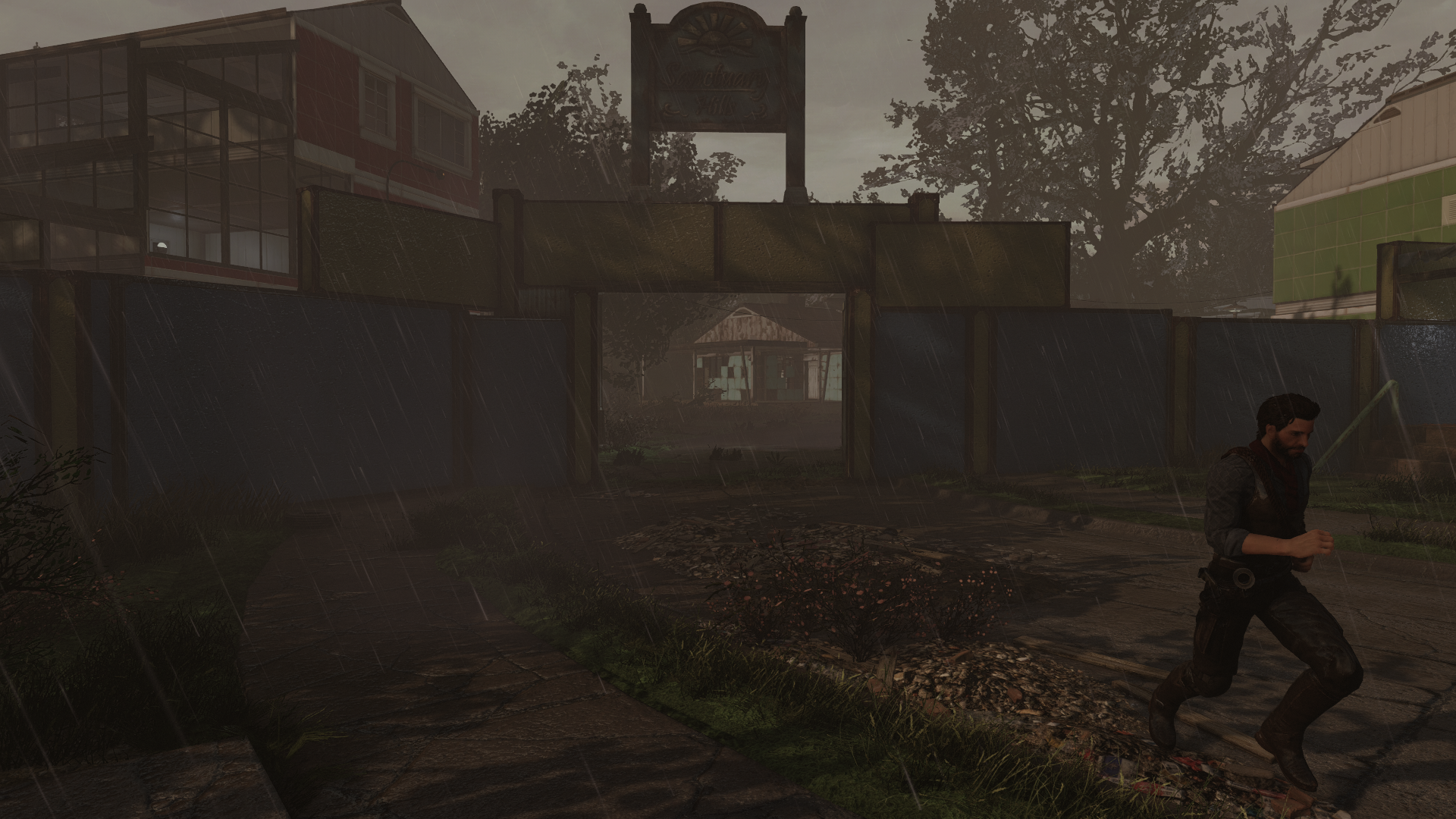 As we got closer to Concord, I could start to hear gunfire to the east. I stopped Jake for a moment and asked him what I should expect. He explained that there were about a dozen shooters in the raider gang, but they didn't have any working pre-war guns or heavy armor. The rest of them were non-combatants - camp followers, kids, walking wounded. He expected them to clear out once the shooters were down - and he was confident that with my power suit I shouldn't have any trouble finishing them off.

As to the gunfire? Jake wasn't sure. We agreed to take a cautious approach, and he accepted when I told him we'd have to back off if there was too much heat on the ground.

It was getting dark by the time we reached the outskirts of town, and that helped a bit with our sneaky approach. The gunshots were still ringing out, sometimes in pretty intense bursts, so I prepared myself to run into a fight between more than one gang. That would be more dangerous, but it was also the sort of thing we could turn to our advantage if the raiders winnowed out their own numbers for us.

Once we got into town, I discovered the situation was a little more complicated. It wasn't raiders versus other raiders, but rather it looked like raiders versus settlers, the latter being holed up in the Museum of Freedom. I confess, I was a little disappointed that place had survived. It was unbelievably tacky, totally just cashing in on the wartime surge of patriotism with cheap exhibits and an inevitable march towards the gift shop. Either way, Jake and me caught the raiders in a pincer between our guns at their backs and the settlers' rifles from the museum balcony. Clearing the street wasn't the end of it, though, as the guy on the balcony warned us that the rest of the gang was inside, trying to break into the room they'd barricaded themselves in.

The guy on the balcony tossed me an improvised laser rifle and a sack of power cells, and while Jake freed one of his neighbors that the raiders had tied up nearby, I busted into the museum to finish off the gang. 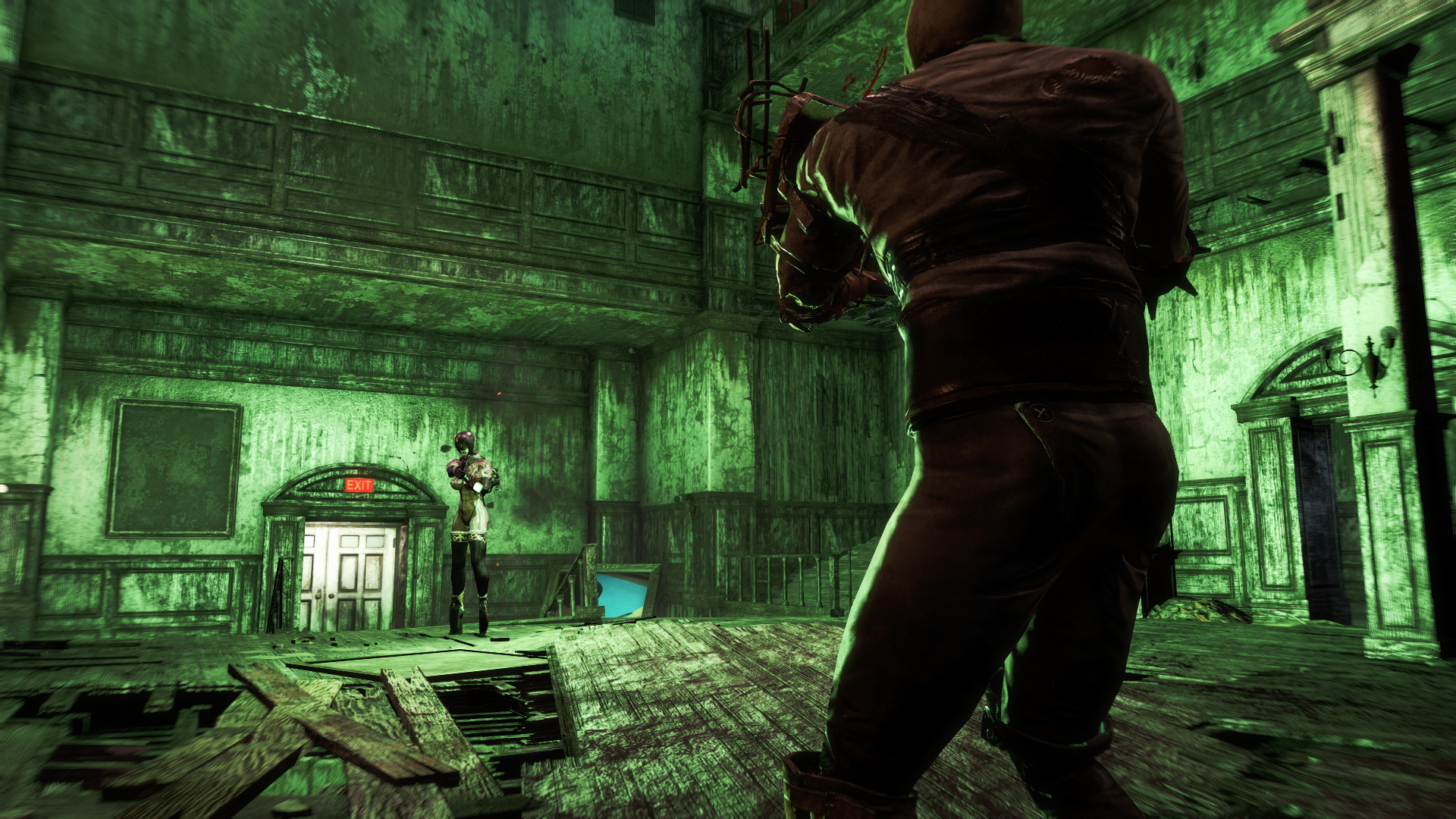 The first one went down easily, but that was the end of my surprise attack. From there, it was a running fight through the museum, and it was immediately clear that Jake's estimate of 12 shooters was sadly low. Shots smacked into the power suit again and again, each one like a punch in the gut, but they never broke through its armor. However, I could feel the medical system working overtime injecting me with stims and other drugs, not even bothering to ask for confirmation. I could see a little !! icon in the corner of my vision, and I suspected if I held my gaze on it I'd be rewarded with a full list of all the injuries I'd suffered and drugs I'd received.

But I just kept pushing on. When my pistol ran out of ammo, I switched to my shotgun, and then to the last musket. Even that started to run low near the end, and I had to finish the last two raiders by hurling one of my very few and precious grenades into the room where they'd holed up. But at last it was all over, and the museum was silent. A quick look at the warning indicator on my suit revealed that I had a number of non-life-threatening injuries that would need treatment soon. My stimpaks were all gone, and somewhere along the way I'd been juiced up with Med-X, a powerful opioid painkiller, which led me to believe I'd be in for a world of hurt when it wore off.

I found the room where the settlers were holed up, and listened as they cleared the barricade. Not long after, the door swung open and I found myself face to face with the leader of the ratty group. 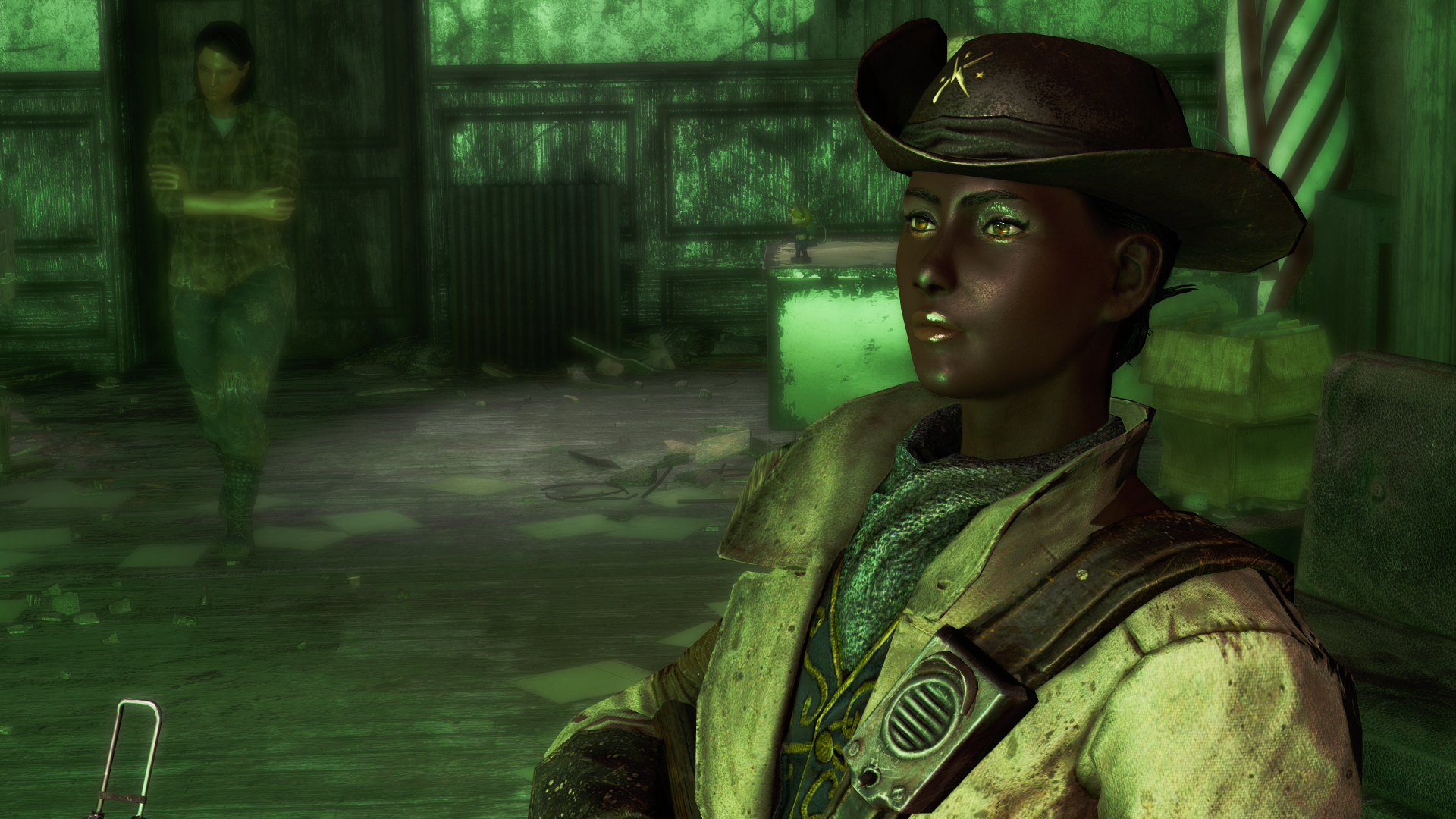 His name was Preston Garvey, and the way he told it, he was with the Commonwealth Minutemen. Apparently, his group were refugees from Quincy, and they'd run into one turn of bad luck after another. They were following - get this - a vision one of their members had received of a sanctuary far to the north, and she'd been leading them not just into one crisis after another but also on a bee-line towards Sanctuary. I didn't have long to speak with the woman - Mama Murphy, she called herself - because just then yet another wave of raiders started pressing on the museum from downtown Concord. I almost wondered if Jake was in on the whole mess and had led me here to neutralize me and the power suit before moving on Sanctuary. If that was true, he was going to be in for a very nasty surprise.

Luckily for me, I was able to scrounge up a few more stimpaks from the ruined museum, and along with some first aid from Marcy, one of the settlers, I was back in condition to fight again.

Now right about now I can tell you're ready to recount the 'legend of Charley' and how I single-handedly repaired a 200 year old suit of power armor, jumped off the roof, killed a hundred raiders, fought a pregnant deathclaw hand to hand, and then carried Mama Murphy on my back to Sanctuary. Bad news: that's mostly fantasy. It was just me in my power suit. I didn't jump off the roof, but I did drop down from the balcony. It wasn't a hundred raiders, just eight, and I had backup from Preston and Jake - the latter of which put to rest my fears that he might be in league with the raiders. And there was no deathclaw. That part was just completely made up. Specifically, I'm pretty sure it was made up by Jake and then spread around the rumor mill.

Still, Jake was excited, Preston and his crew were relieved, and it looked like for the moment at least Concord wasn't a threat anymore. Jake told me to meet him back at the radio tower and then he'd show me more about using the ASAM sensors, and he disappeared to start preparing for that. Meanwhile, I met back up with Preston and his gang to discuss what their next steps were going to be. 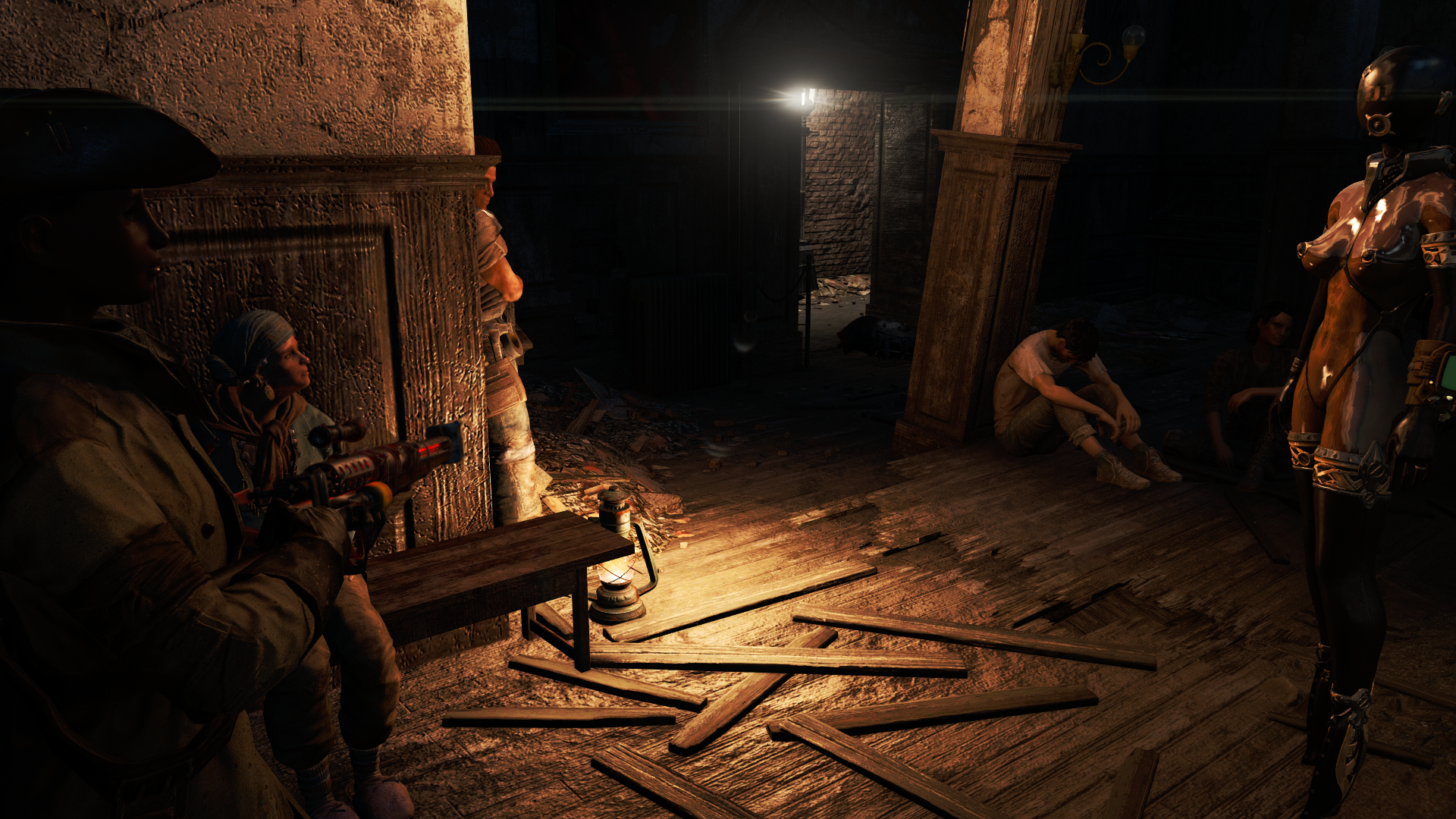 The five of them all seemed whole and healthy, and Preston was quick to thank me for saving them. He offered me a stash of microfusion cells by way of thanks, and I accepted it graciously. Honestly, considering the tough straits they were in, I would have helped them with or without a reward, but I appreciated the gesture. I told him I was happy to help... and then Preston said something that made me laugh.

"Well, if you feel that way... maybe you'll accompany us to Sanctuary."

I tried to hold it back but I couldn't stop. I barked out a quick laugh that drew odd looks from everyone around.

"Preston," I said, "let me tell you about Sanctuary."

And then I explained it, point by point. Yes, Marcy, Sanctuary was real and you don't need to doubt it anymore. Yes, Mama Murphy, Sanctuary is protected by ancient technology, in the sense that much of it is built with resources and data from a vault. No, Preston, it's actually you who can accompany me to Sanctuary. As the acting Overseer of Vault 111 (okay, that was a bit of embellishment) and the mayor of Sanctuary, I'd be happy to have them in our community. I could even get them housing within a few days - they'd need to hot bunk until then.

That got a long silence as a lot of the whole group's preconceptions battled with a strong does of reality. 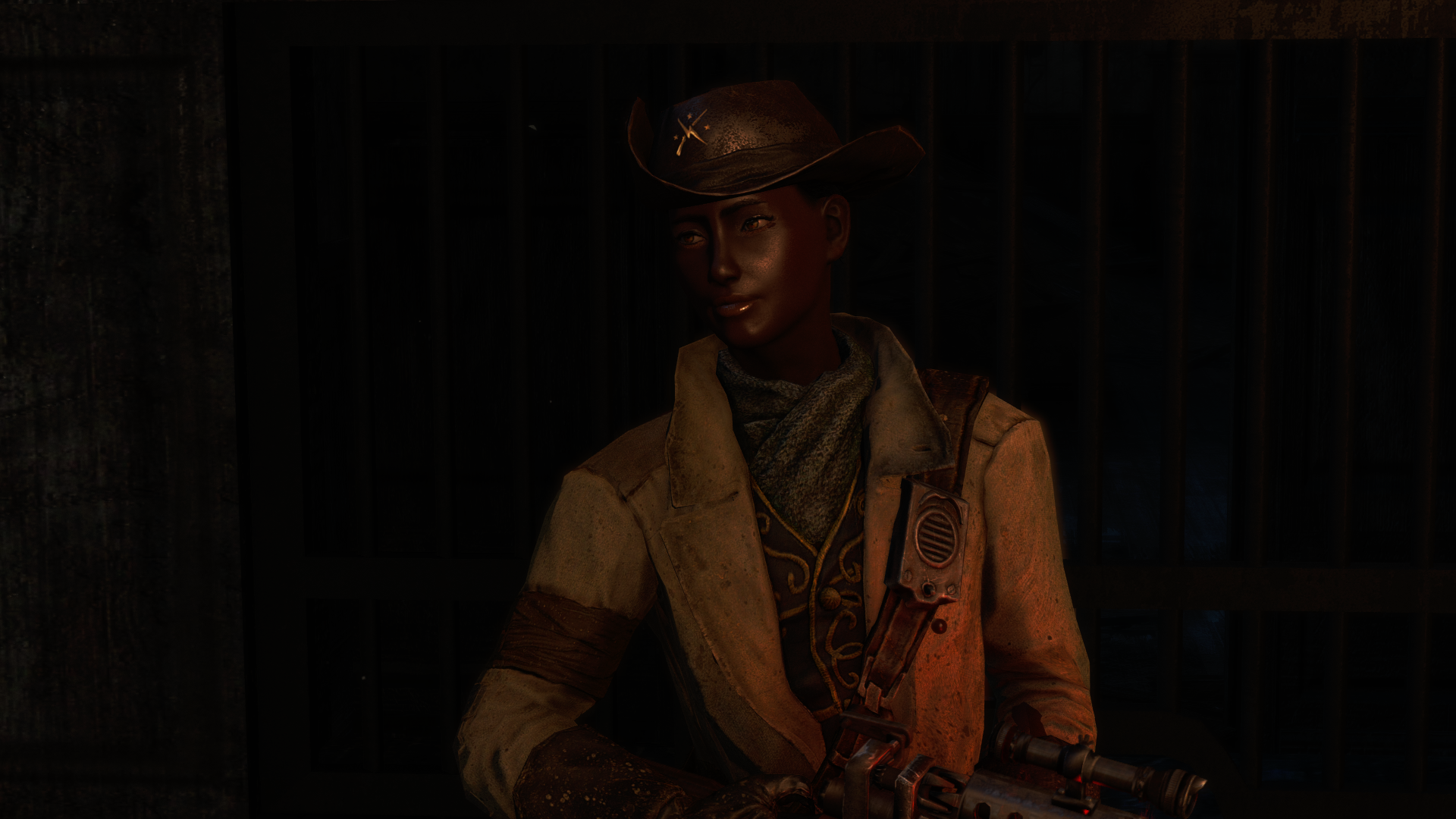 "Okay," said Preston. "That's not what I was expecting to hear at all. But it's good, I guess. Is the way safe?"

"It should be, now. Nothing but dead raiders between here and the gates."

"In that case, I'd like to make the move tonight. I really don't want to have to fight any more reinforcements who show up. Though let me tell you, some day I'd like to come back here and bring some real law and order to this town. Did you see, earlier? The plutonium well looks like its still intact. This place is just begging to be resettled."

"It was already pretty dark when I got into town, but I believe you. This whole area seems to be in much better condition than Cambridge, at least if you ignore the wear and tear on the wooden parts. But you're also right about needing to move on. Concord clearly isn't safe right now. Is everyone ready to hit the road?"

Despite some complaining from Marcy, the group was indeed ready to move out, and we followed the road west under cover of darkness. Just before dawn, we reached Sanctuary's gates, and I stopped Preston for a moment. 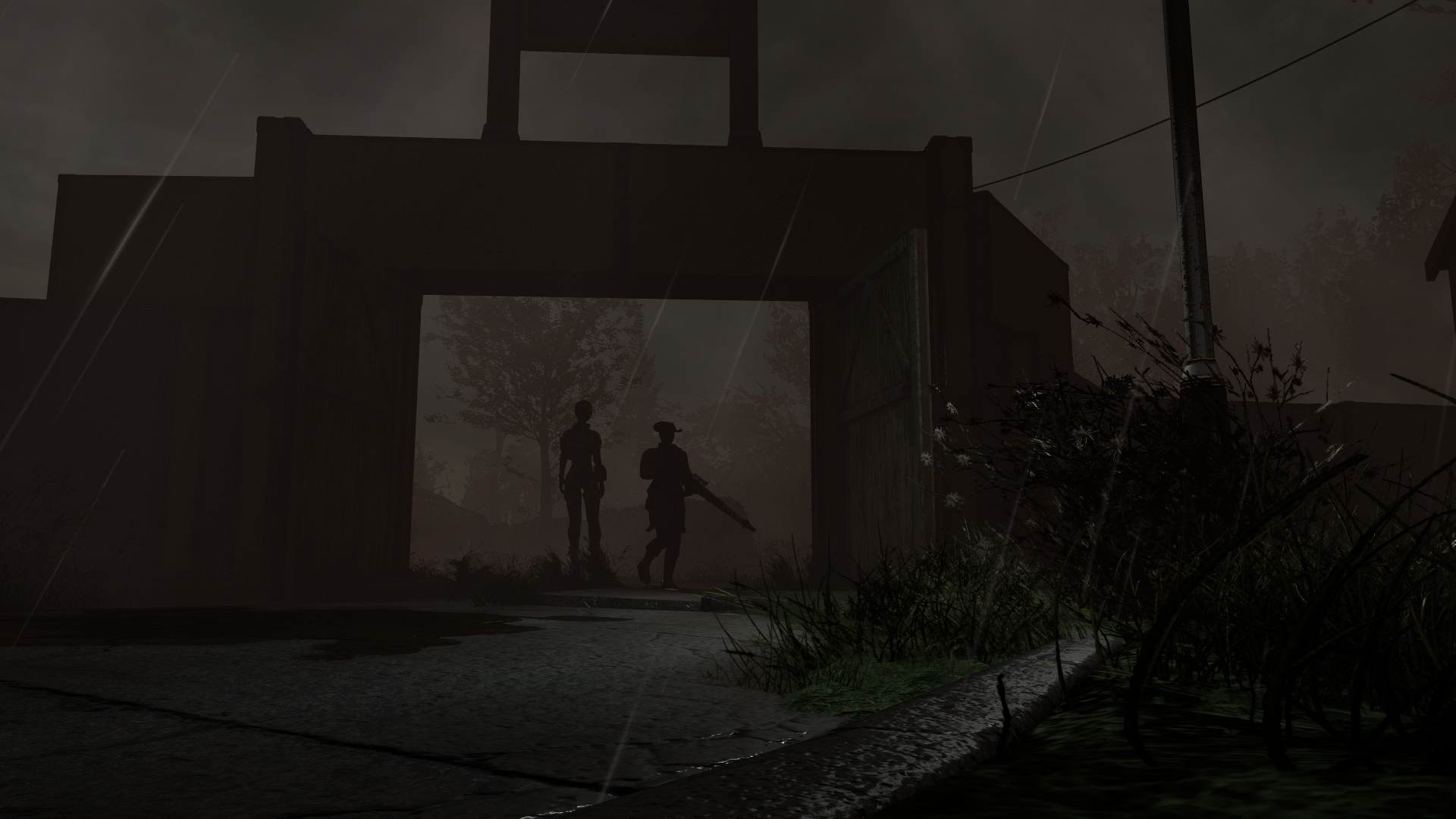 Tracey must have made some progress on the decontamination center while I was away, because there was a new sign posted at the entrance.

Under the Authority of VAULT 111

Trading is a Privilege - No Weapons Allowed

Preston looked at me then, his eyes questioning.