The process of building up Drumlin Diner into a more defensible position proceeded at a good pace. Seth pretty quickly concluded that the pond out back wasn't a good candidate for a full-scale water purifier, but he did manage to run a pipe down to the pond that he hooked up to a mechanical pump to draw water back up to the Diner for purification on site. When he was done, we buried the pipe and finished walling up that side of the Diner's parking lot.

Two days later, Preston's guards arrived, complete with body armor and laser muskets. I set them up on a schedule of guard duty around the Diner, scouting the immediate vicinity, and scavenging both in the unexploited junk around the back of the diner and also in any places the scouts found. Once we had this all worked out, I headed back towards Sanctuary - I needed to visit Ridge and collect some more ASAM sensors from the stash I'd left there. While I'm sure I could have built barracks for the guards, I preferred that they did the work themselves. It would help keep them busy while they settled in, and the sensors would help in their efforts to scout out nearby resources.

When I came back a few days later, I was pleasantly surprised to see Carla wearing a vault suit in Drumlin Diner colors. "Carla," I said, "I thought you didn't want to put on the vault suit until I sorted things out with Vault 81. Did you change your mind?"

She coughed out a wry laugh. "Gwen McNamara made the decision for me. Bad news, by the way, I'm banned from Vault 81, and that means I might as well be banned from Diamond City, too. Apparently word got away that I'm doing a lot of business with you, and now McNamara's accused me of spreading rumors about the so-called imaginary Vault 111."

She shrugged. "Long term, I need to find some new suppliers, but I'm all right for now. Just don't expect me to be able to get you as much stuff as you wanted before. If you could make peace with Gwen sooner rather than later, I'd appreciate it."

I had to admit, the whole situation with Vault 81 had been on my mind for a while already, and this just confirmed that I couldn't ignore it indefinitely.

"I don't know if I can promise much," I confessed, "but if I find myself down that way I'll set aside time to try and meet with her."

"Heh, good luck with that. But I appreciate you wanting to help."

After checking once more to see how things were progressing around the Diner, I headed back towards Concord. Sturges and a few other volunteers stayed behind to finish up working on some critical systems, including heavy security doors for the gates, so the Diner could securely close up outside of trading hours. Once I reached Concord, I swung north until I reached the edge of the quarry. I wanted to put my eyes on it before I let Preston get to work, so I understood exactly what we were walking into. The day was overcast and misty, which made it hard to fully get my eyes onto the quarry from a distance, but it looked like there might be some kind of settlement in place there. I hoped this was just another abandoned camp, but either way I was glad I checked. If this place was inhabited, Preston would need to know about it.

I made my way down the rocky descent to the base of the quarry and looked around. Most of the place was flooded, but even then there was plenty of space to put up an outpost and control the road. However, it also wasn't uninhabited. Not to say it was really 'inhabited' so much as 'had an inhabitant.' I found a man living there, who introduced himself as Sully Mathis. He apparently wanted to scavenge some abandoned equipment at the bottom of the flooded area, but the water pumps he'd brought had stopped working.

We discussed the situation a bit, and I agreed to help him fix his equipment on the understanding that anything he didn't haul away afterwards would be mine to claim. It seemed like a fair enough deal and even a good way to make a friend for the future. The flooded quarry, it turned out, was not suitable for human immersion in any way. Fortunately, the power suit shielded me from most of the radiation, but I still had to take several doses of Rad-X while I completed the work, and then a course of RadAway immediately after. I threw the switch on the pump and Sully and I watched the quarry start to slowly drain. After it became clear that this would take hours, if not days, I reconfirmed our agreement and headed back to fetch Preston and his crew.

Preston seemed happy to see me when I got back to Sanctuary, and he started out by asking me how his guards were doing at the Diner. I gave him a quick rundown, both of their duties and how they were building their own housing. He seemed please to hear both details, and he suggested that I set up a similar schedule at Abernathy Farm - an idea I definitely agreed with.

Then I briefed him on the quarry and his face took on a bit of a concerned look. "I hope it's nothing," he said, "but what you did could have gone two different ways. I hope this guy Mathis is good for his word, but in the past there's been raider activity at that quarry. I'm concerned that when we get back there, we might be walking into an ambush. Let's approach the place carefully, alright?"

I hadn't considered that possibility, and I hoped that Preston was wrong. Still, it made sense to be cautious. Preston gathered up his squad and filled them in on the plan. I'd go in, along with the robot - I assumed he meant Codsworth - to check for hostiles, while Preston's crew would take up positions on the upper ledge of the quarry. If things got hot, they'd support me with covering fire while working their way around to cut off any retreat.

Afterwards, I told Preston I'd go collect Codsworth, but he corrected me: the robot was in fact a new machine that Ada and Tracy had put together, designed to give some heavy fire support for the quarry outpost. He led me over to the robot repair station, where I found a new, bulky machine I hadn't seen before. "The guys up at Ridge found most of the parts," Preston explained, "then Ada and Tracy got it working again. It's got an shocker on the right arm and a, uh, well it sprays liquid nitrogen from the left arm. It'll keep any hostiles off your back."

"Right away ma'am", the robot responded as it fell in behind me.

I hate to admit it, but Preston was absolutely right. The whole quarry was swarming with raiders; they must have moved right in as soon as I left. They put up quite a fight, too, but with laser bolts raining down on them from above, they couldn't get out of cover enough to stop me and the robot from picking them off a few at a time. In the end, the few survivors surrendered. Preston detailed some of his folks to tie them up and put them under guard while I pushed deeper into the quarry. 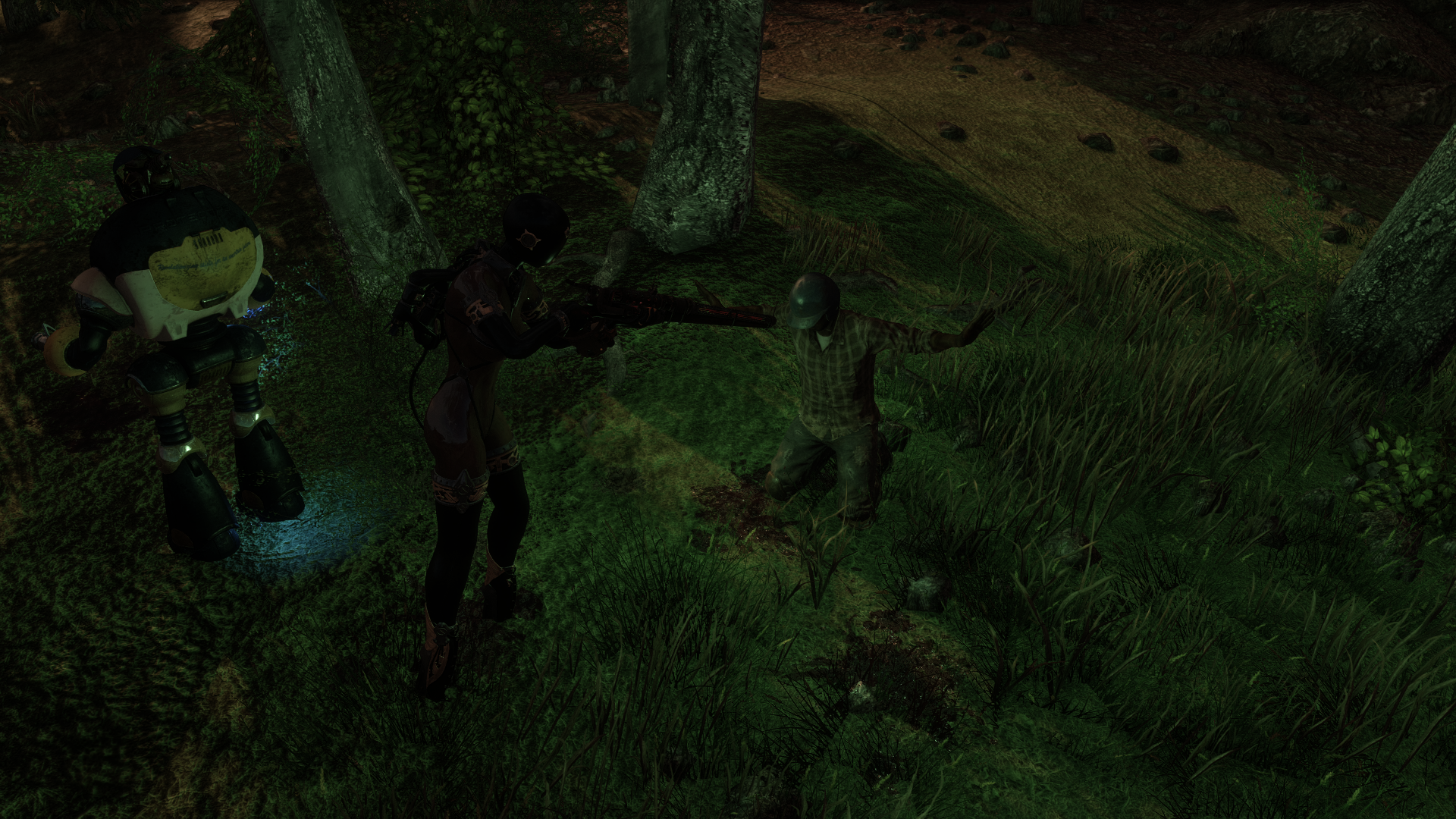 We spent the rest of the night clearing the lower sections of the quarry. As it turned out, a number of raiders were holed up in there, and we flushed them out one by one until they were all gone. Once we were confident the area was secure, we took turns resting a few hours at a time until sunrise.

The next day, we started setting up the outpost. We knew this would take a while, but Preston had brought some ASAM sensors and we used them to simplify the process of constructing some basic shelters. While Preston's troops and I worked on the outpost, he interrogated the raiders. The interviews went on for some time - as it happened, once they were helpless the raiders were quite willing to cooperate. Unfortunately for the raiders, those interviews revealed that they were the same gang of cannibals and murderers who had set the trap north of here that almost claimed the Donahue sisters.

Preston and I spent some time discussing our options. In a perfect world, we both would have wanted to put them on trial. However, we didn't have the resources or even the civil education across our settlers to conduct a fair jury trial. Now that we knew this was the cannibal gang, their fates were sealed. One of Preston's new guards suggested finishing them off in a gruesome fashion appropriate for their crimes. Perhaps impaling them on rebar, or feeding them alive to the mirelurks that seemed to infest the deepest part of the quarry. Preston rejected that as well, not wanting to stoop to the level of the raiders.

In the end, we settled for the old chestnut of hanging. We put up a gallows and set to disposing of the raiders one by one. Then we threw the bodies into the mirelurk pit. No sense in letting them go to waste.