An unseasonably warm rain was just rolling in as I caught up with Seth and Lila, and it didn't take long before their clothes were plastered to their skin. Still, no one was shivering, and after removing my helmet - I'd been practicing at removing the air filter without help and managed it pretty smoothly - I called the other members of the settlement over to make the introductions. I could see both of their eyes widening a little as they surveyed the group.

"This is... you're the vault dwellers people are talking about."

I crooked a bit of a grin at him in response, "that's us. I'm sure you've heard all kinds of wild stories." 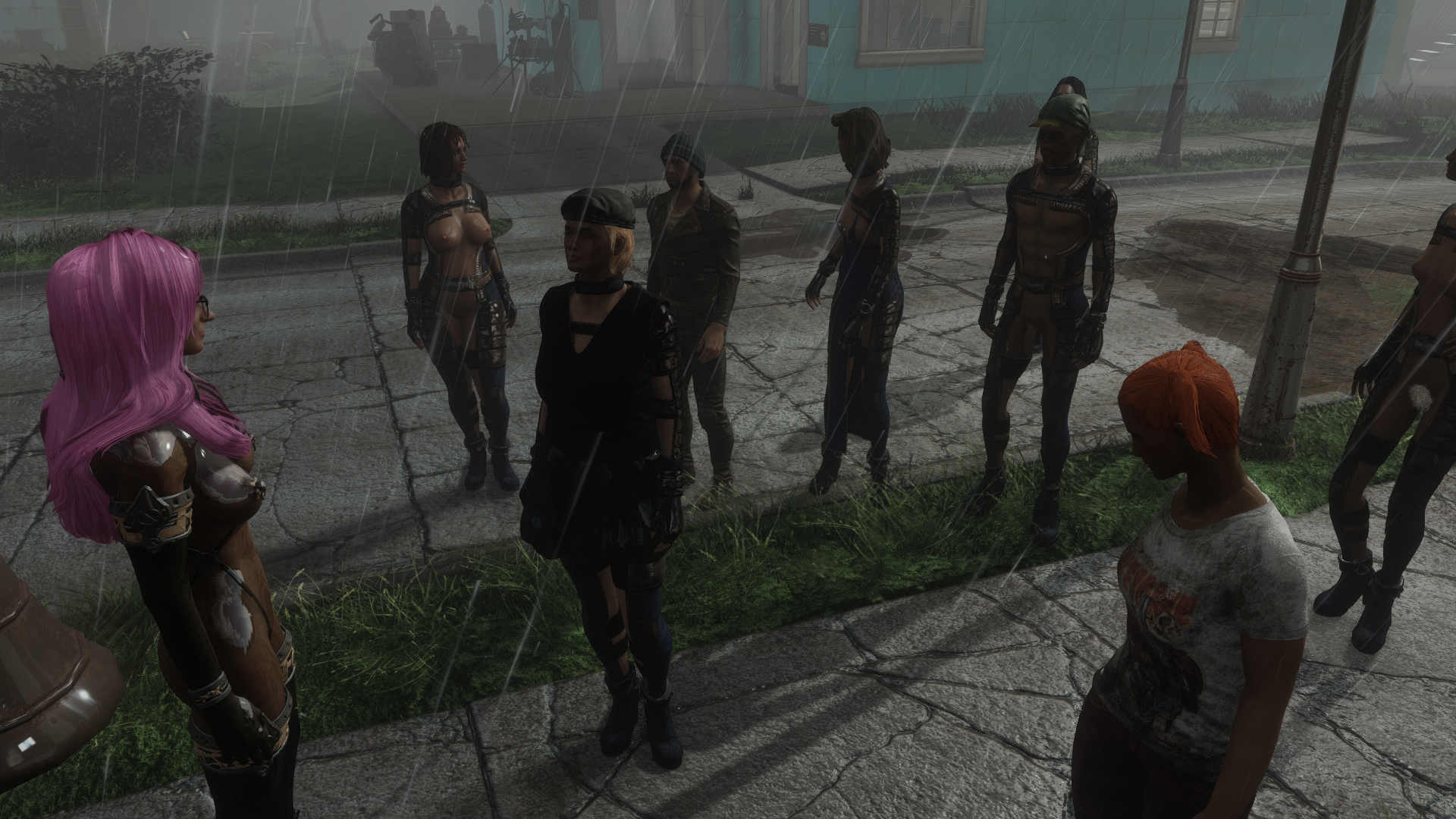 Working around the crowd, I made the introductions. "Seth, Lila, this is Tracey, Holly, Stef and Fred, Winter, Scout, and LonDon. Folks, this is Seth and Lila. They have a background in water purification and I think they can help us improve the quality of the water supply."

Stef turned to Seth and clapped him on the back. "Just who we needed," she said, "the better water we can get, the better the results we're going to get with our crops." Then she turned and looked to Lila, adding, "and you too. This is the perfect time to bring you two onboard."

Tracey figured out where he was going and finished the sentence for him, "the uniforms? The vault suits? I felt the same way at first. But don't knock it till you try it. They keep you healthy, and like the boss says - we don't have any special upper class with special privileges, so we don't need fancy outfits."

That brought my mind back to the Brotherhood flag I'd seen over Cambridge. The gears and the sword... it had reminded me of something I'd expect to see on a second world country's flag. Was I turning Sanctuary into a second world country? Intellectually I understood that in a primitive survival situation like this, it wasn't unusual for societies to be more cooperative, even a little communistic, but I was a proud American and I wondered if I was taking these people down the wrong path. After a moment I put my doubts aside for the time being, but I promised myself I'd give it serious thought later."

"What about those two?" Lila asked, looking to Holly and Stef.

I shrugged. "Grandfathered in. They were in with the first four, and we hadn't settled on all the rules yet. But custom outfits or not, they don't get any special privileges or rights."

"They get to cover up their junk," Seth mumbled.

Fred chuckled at that. "Listen, kid, once you've gone commando for a while, you won't want to go back. And besides, its only fair with all the--"

Stef swatted her husband before he could elaborate further on his thoughts.

"Seriously, you two, no one's forced to stay here. Give this place a try and tell me how you like it after a few days. If its not the right fit for you, then we'll part ways with no hard feelings."

The pair still looked a little hesitant, but before the debate could continue further, Winter roped them in and led them towards her house, promising to show them the amenities and help them get their suits fitted.

As the gathering started to break up, I considered pulling aside Stef and Holly to talk about the impact their special outfits were having, but on second though I decided to save that talk for a different day. In the meanwhile, I got to work breaking down all the glass I'd brought back from Cambridge Polymer Labs and turning them into window panes for the greenhouse. With the new resources in hand, I got the first floor of the greenhouse building completed without any complications. My original plan had been to build a second level greenhouse on the floor above, as well, but I had to reconsider that now that I had two new people to provide housing for. 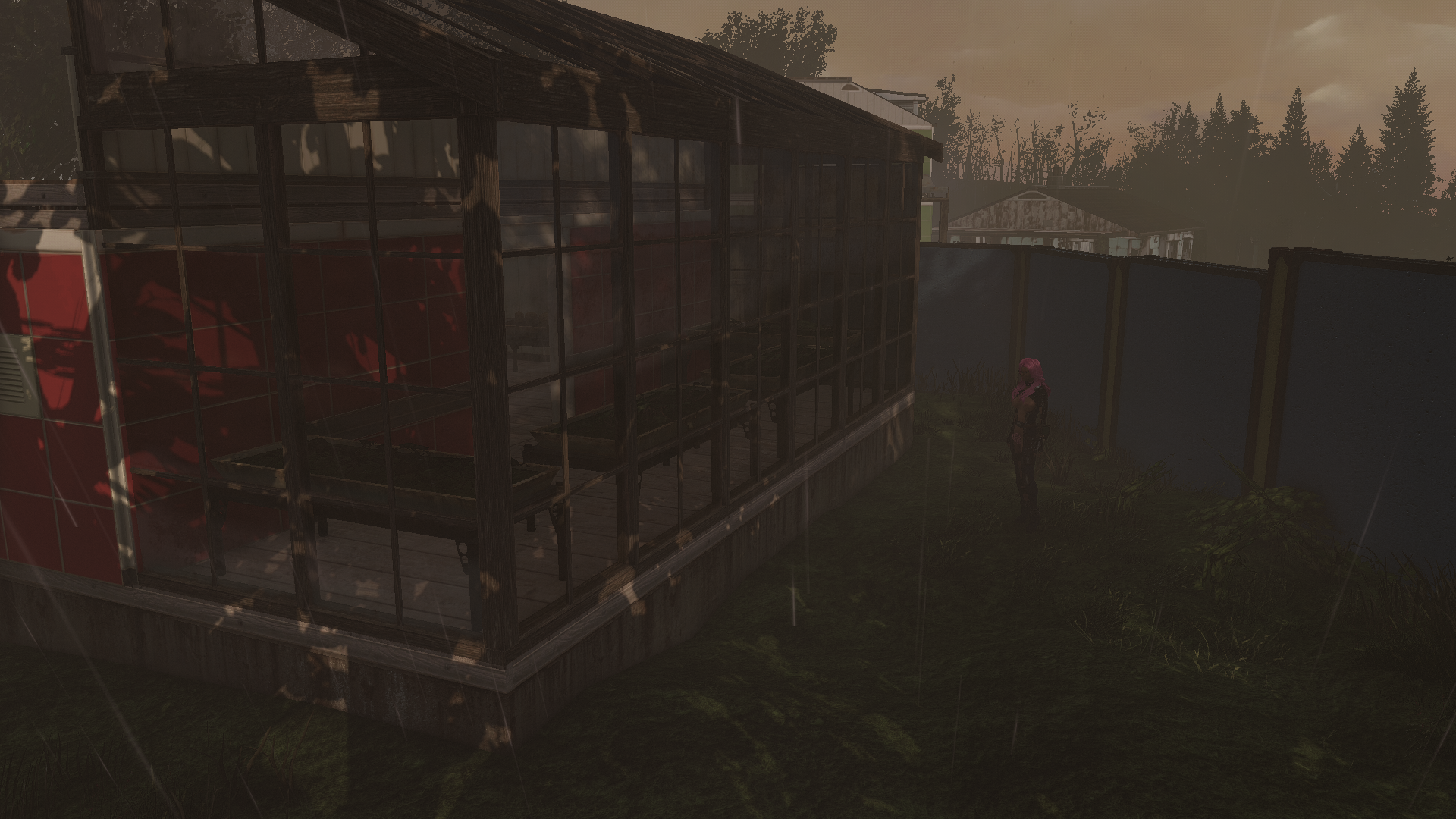 In the end I decided to compromise; knowing that I'd have to go with a cathedral ceiling arrangement for the second-level greenhouse, I set aside some of the floor space to build a split-level apartment that our water experts could use. I worked well into the evening and got most of the upper structure built out when Winter found me. She was breathing heavily and I was pretty sure she'd been running around the settlement trying to find me.

"Calm down, what do you mean?"

"When Stef and Fred closed up the vault, I had them leave behind a few tripwires so we'd know if someone went in without our permission. One of them just went off - somebody's in our vault!"

I swore quietly, then looked to Winter. "I had really hoped we'd have more time, but I guess we both knew this was going to happen eventually. Help me get suited up - I'll go investigate... and take care of any intruders.

All our practice with the suits paid off, and I was ready for action in no time. I quickly made my way up the path to the vault and set the elevator to descend. A tinny voice called out, "new residents, proceed in an orderly manner..." in the distance, but I suspected what I was about to encounter would be anything but orderly.

I'd feared raiders, but what I found at the bottom was Ghouls. Lots of Ghouls. 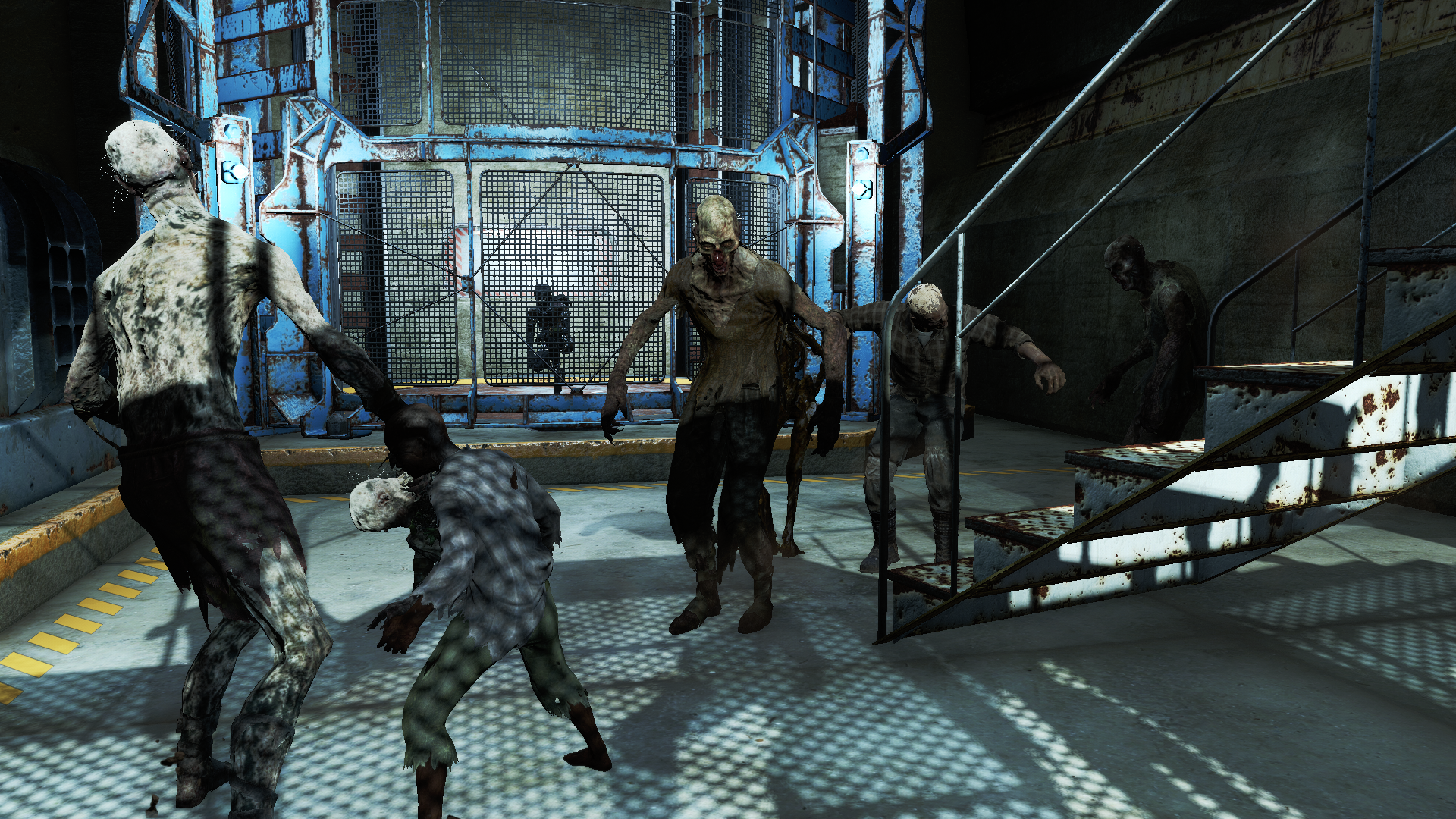 I knew I had to break out of the initial gaggle of them at the base of the elevator - and fast - so as soon as the cage door opened I triggered the biofuel injector and blasted my way through the crowd and up the stairs into the vault proper. From there, it turned into a running battle as the Ghouls chased me throughout the vault. Unfortunately for them, I knew the interior like the back of my hand by then, and each time they tried to hem me in I managed to slip away from them. As I went, I took shots of opportunity while I liberally used the biofuel to get an edge in avoiding their attacks. When the reservoir ran dry, my belly was notably swollen from the huge amount of drug-laced foam that the medical system had injected into me. 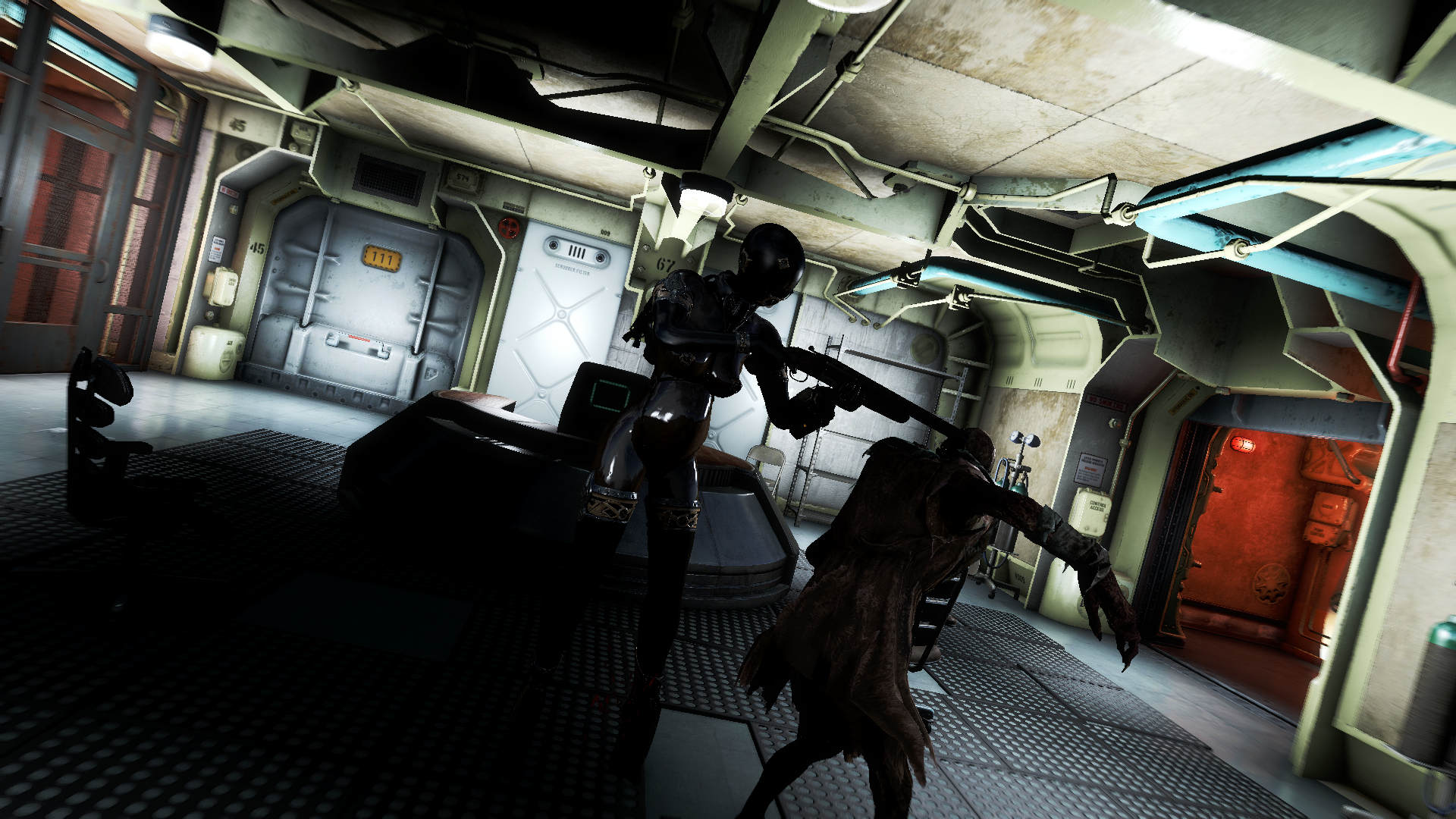 Just as I started to really feel exhausted, the tide of Ghouls broke. Pushing back at them, I dispatched the last few stragglers before sweeping through the vault looking for any that were hiding. The last one - curiously enough, dressed in a Vault-Tec lab coat - was hiding out in the Overseer's quarters. He growled and grunted at me, totally unintelligible but seemingly trying to express something more complex than the others, but then he lunged at me and I finished things. 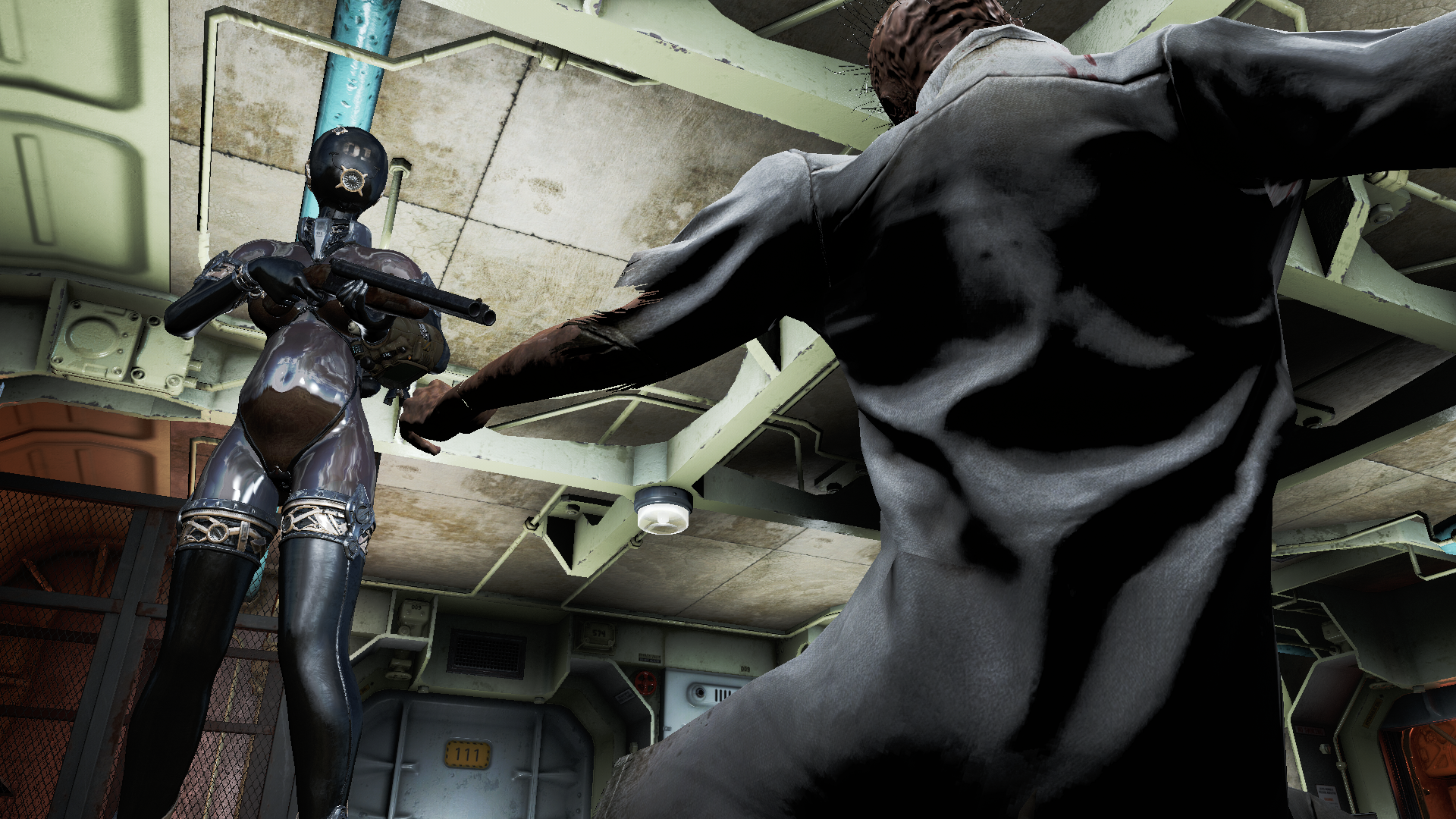 Examining the corpses revealed that the lab coat Ghoul had a Pip-Boy in his possession. It explained how they'd broken into the vault, and further hinted that this one's mind might not have been completely gone. Regardless, I couldn't just surrender the vault to anyone who rolled around. After searching each of the Ghouls for anything of interest, I fed them into the vault's Workshop and watched as the leather, fertilizer, bone, and cloth reservoirs started to fill up. With that done, I reset Winter's alarms and closed the vault back up, then I returned to Sanctuary.

I was exhausted, but I couldn't immediately get to bed: after I got out of the power suit, I found Seth waiting for me at my house. He'd changed into his vault suit and seemed to be getting used to the high heeled boots. 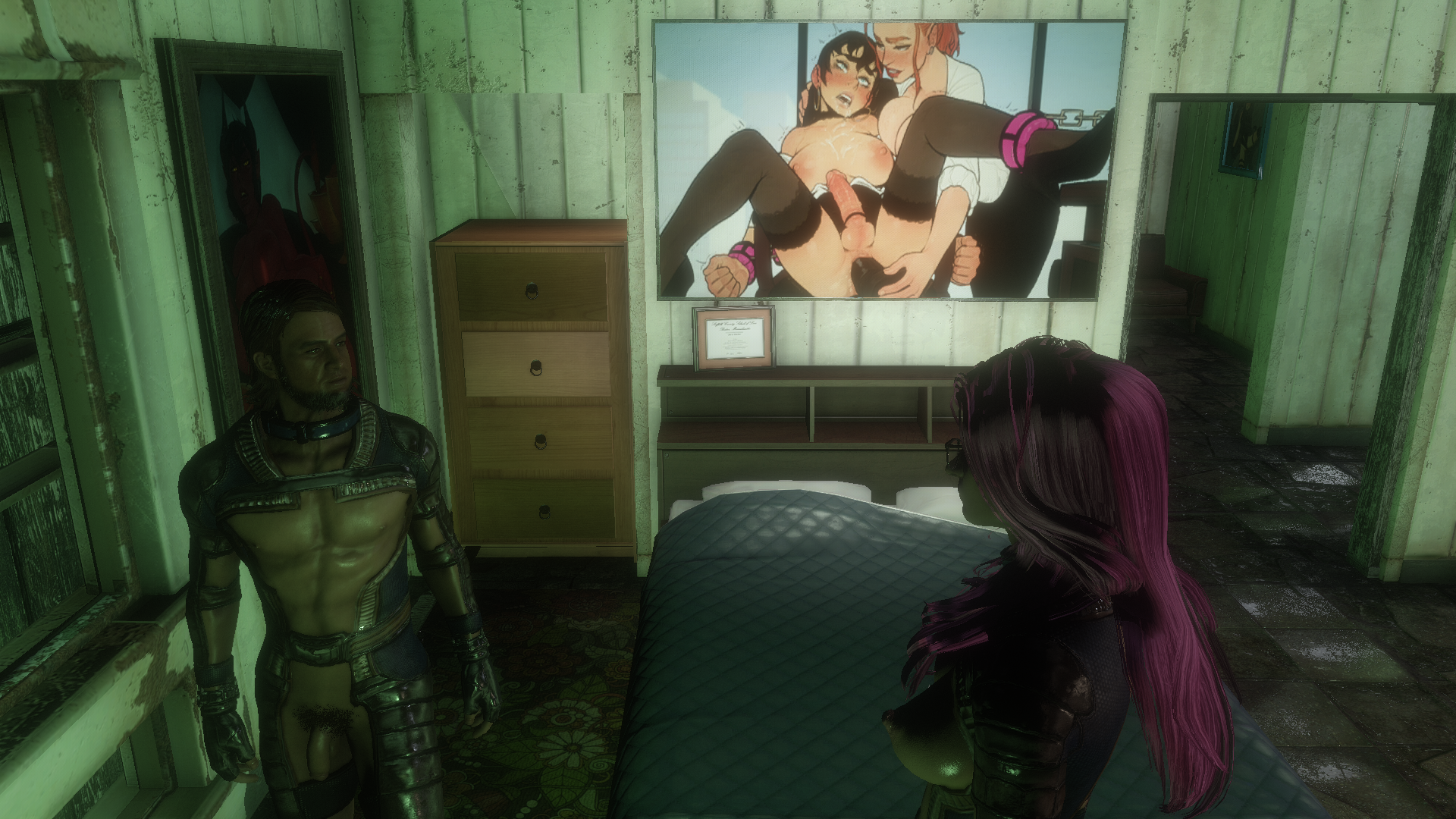 "Seth," I said, trying not to look too wiped out, "that vault suit looks good on you."

"It fits well," he agreed, "but I don't know if I'd say I'm completely... comfortable. Especially with so many women around."

I laughed at that, "I take it you were having a hard time not showing you appreciated the other settlers' looks?"

He looked away for just a second before answering. "Yeah, that's a kind way to put it. I haven't been that embarrassed in a long time. That, and these heels... they're comfortable, but I feel ridiculous. Isn't there a separate men's version, with normal shoes?"

While we talked, I could see him making an effort to keep his eyes off my breasts, and I noticed that he cock seemed to twitch occasionally.

"You seem to be making a real effort to show self control," I observed. "I appreciate that. But it's late, and I'm tired, and it's pretty obvious you're interested in what you see. And you're the first unattached man to join our settlement. Why don't you lie down with me and we'll relax a bit." 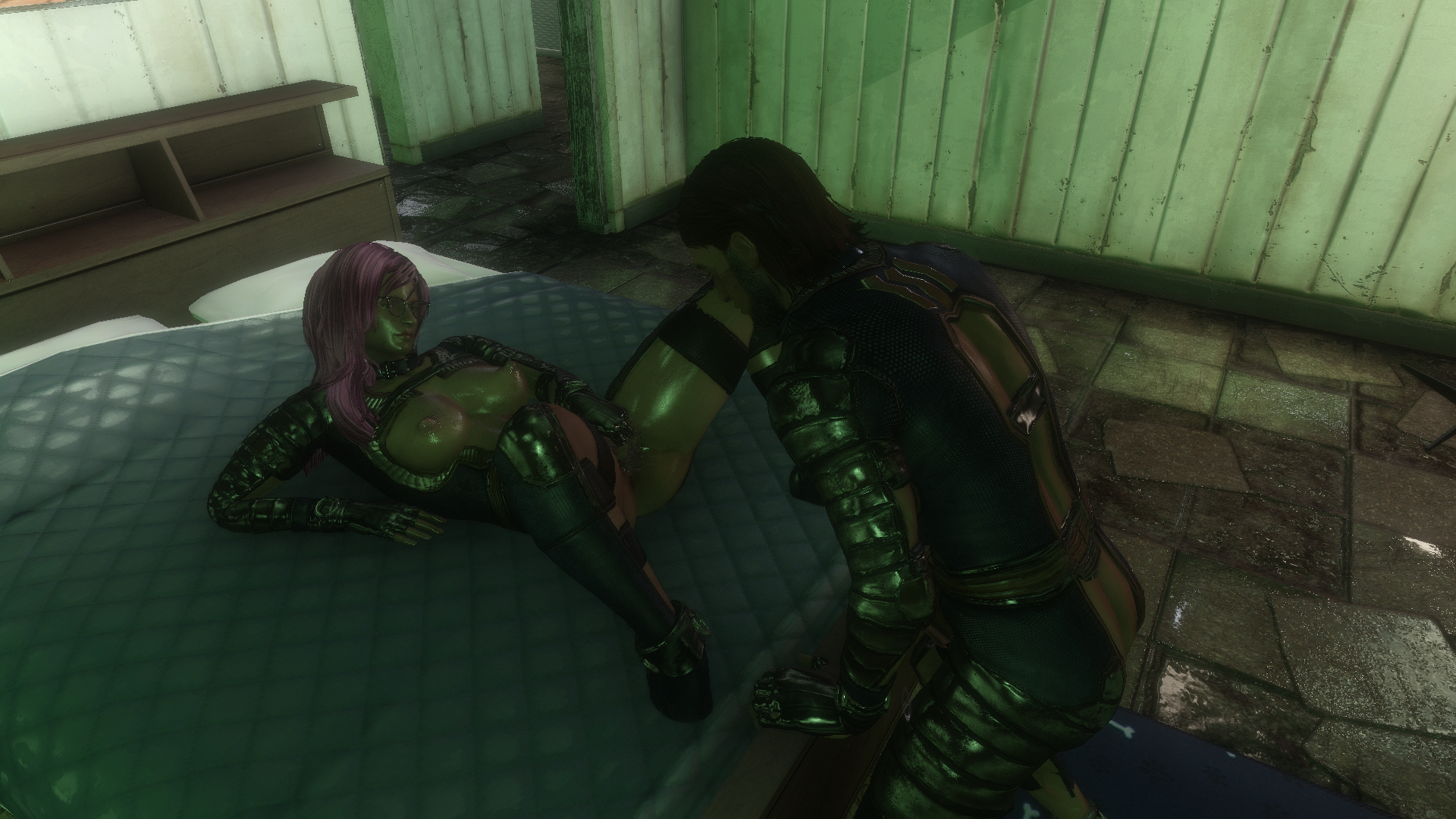 It didn't take much beckoning to draw him in towards me, and from there it didn't take long to pull him fully into my bed. Seth's technique wasn't anything special, but at the same time I was hardly complaining after going so long without any male attention. Winter and her strap-on were nice, but it wasn't quite the same. And I have to admit, I felt a sense of relief too that I was able to enjoy the experience. I'd been worried that Vault-Tec had conditioned me to go full lesbian, but apparently the love of hermaphrodites they'd instilled in me left me with an adequate hunger for hot cock. 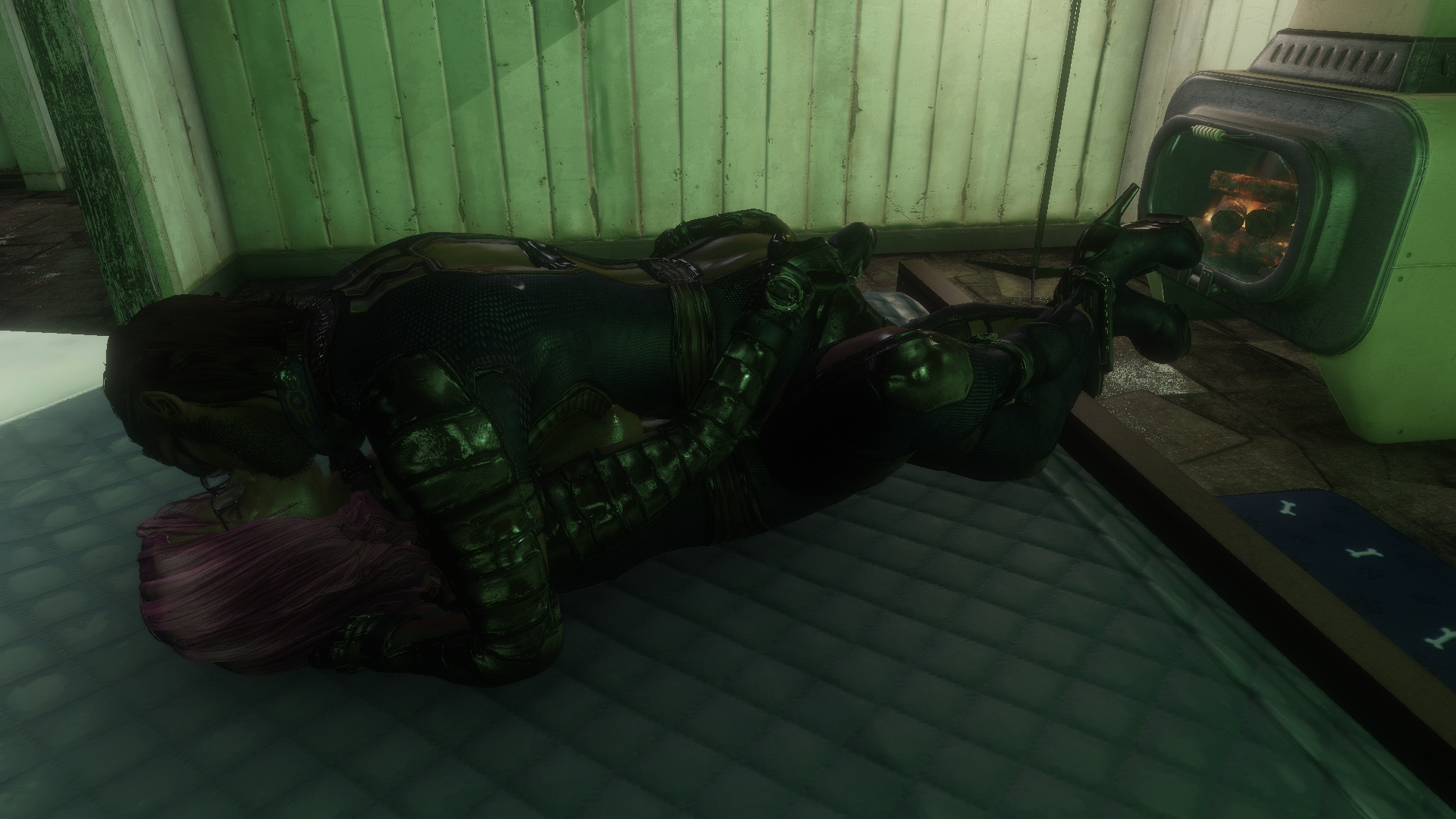 Seth didn't last a terribly long time. Evidently, the fine words of wisdom from She Comes First hadn't survived the apocalypse, but he had the consideration to stay and cuddle with me for a while after we finished up.

Seth laughed, "I don't know. Everything here is strange to me, but I'd be lying if I told you I didn't kind of like it. I'll talk to Lila, see how she's settling in. If she stays, I'll stay too."

My tiredness was starting to creep back over me by then, and I didn't push him further on the conversation. Before I fell asleep, still cuddling with my new neighbor, I realized I'd never followed up with Winter about the radio transmitter. I'd have to take care of that in the coming day...