This poll is closed to new votes

I hope this letter finds you well. When we parted company earlier this year, I was eager to discover the secret behind the strange forces influencing my fate. I'm pleased to tell you now that while I haven't unraveled the mystery, I may have at least found a thread to start tugging on.

I think you would have enjoyed the adventure my search took me on. I met a number of interesting people, overcame difficult challenges, and set my eyes on some truly wondrous places. I learned some very interesting things about the history of the ancient Snow Elves and their magics - secrets that I imagine the Temple of Dibella would find quite intriguing - and delved to the very foot of their lost ruins. And, last but certainly not least, I strengthened my arms and my body in battle against challenging and dangerous foes.

Now I face a choice, and great uncertainty, about where to pursue the leads I have uncovered. Two newfound friends have both given me good advice, and I struggle to decide which to avail myself of. On one hand, a web of influence stretches across Skyrim - I'm told that at its heart lies answers to one of the powers that is manipulating my destiny. On the other, I've learned of a cult in Solstheim that may possess similar knowledge. Either line of investigation will likely cost me months of time to run to its completion, and so I must consider the question carefully. As I write this, I am waiting on an old friend to glean her opinion, and she will not be the last one that I ask.

On the topic of 'old friends,' you should know that our past adventures seem to have won us a persistent enemy. Surviving her brother-in-law, Betrid Silver-Blood has sworn revenge and offers a small fortune to anyone who brings her my head. I imagine that a similar death mark has been set against you. Though I'm sorely tempted to pay her a personal visit in Markarth and permanently resolve the situation, I've decided against it for now. I've been told once, and I've secretly overheard from another credible source, that I have not fully come into my power yet. Before I confront the Silver-Blood clan once and for all, I must be the master of my self, able to fully wield my magical strength against our enemies. Know that this threat remains here in Skyrim; if you return, be cautious.

Enclosed in this letter is a small gift - a magical construct that I came into possession of in the course of my adventure. Where I go next may be unsafe for him, and so I commend him to your care. While I have not found the secret of truly communicating with him, he seems to be friendly and warm-hearted, and I believe his companionship will do you well in cold Northpoint. Speaking in companionship, when Skyrim is again safe for us to move openly within, you truly must introduce me to my long-lost siblings. I'm eager to reconnect after so many lost years.

But I see my courier has arrived, and so I will draw this letter to a close. Be well, and go in the Lady's grace.

I folded over the letter and started to affix a seal as Jenassa slid into the chair next to me. Crossing her arms, she looked at me with a bit of concern in her red eyes. 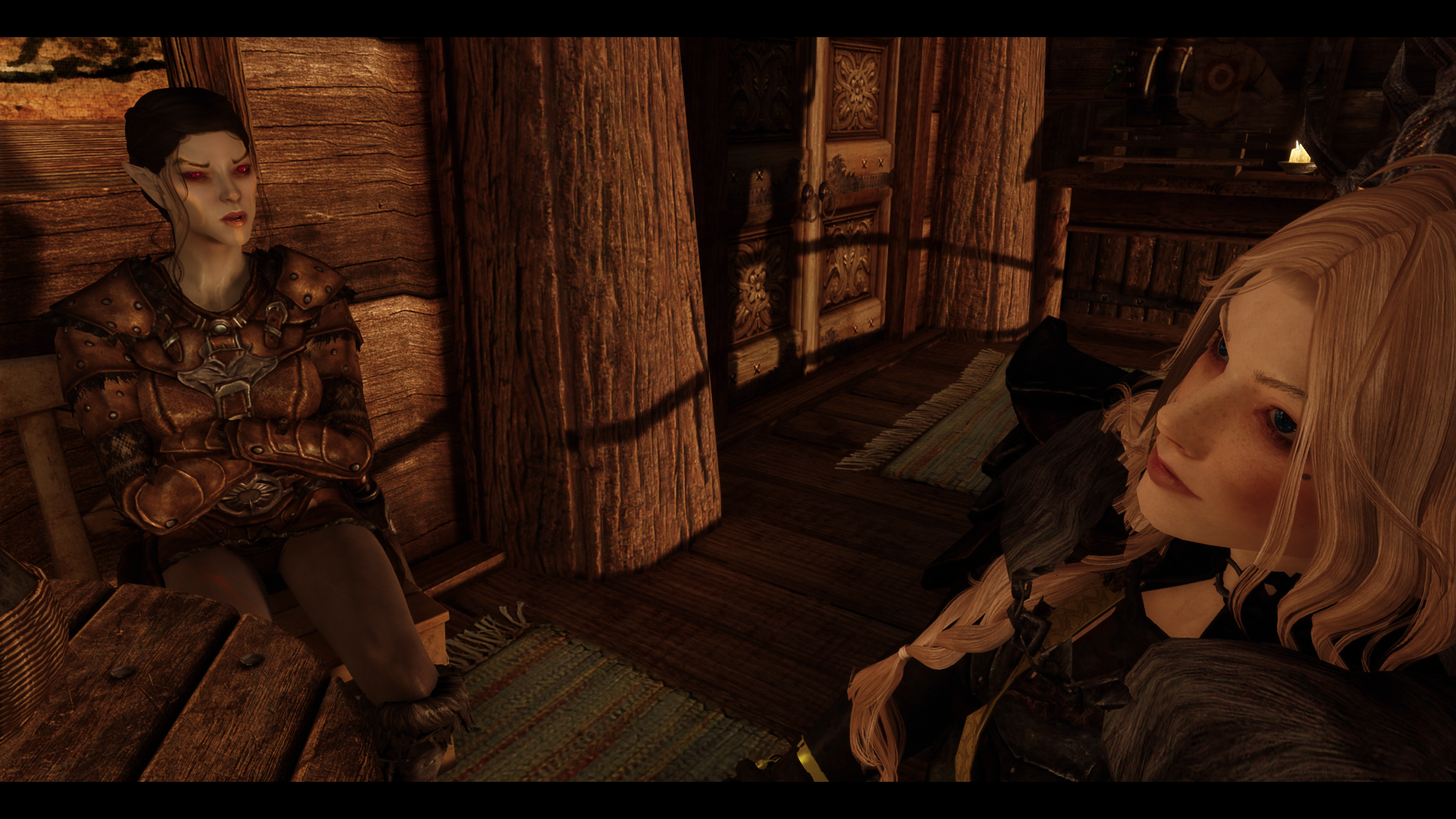 "I see you still have your horns," she said. "Am I to take it that your mission wasn't successful?"

I leaned back and thought on my answer for just a moment. "I wouldn't so much say unsuccessful as unfinished. I ran down one lead and got some important answers, but another part is still a mystery. That's what I'm trying to understand now."

"Ah," the Dunmer said, "that's better, I suppose. For what it's worth, you look healthy. Stronger, too. I think the adventuring lifestyle agrees with you."

I smiled at that, nodding, "I agree. And the places I've seen... I think you would have loved it if you were there. This land hides so many amazing things beneath its surface - amazing things and amazing people."

"I won't argue with you there, Kirstia," Janessa slowly replied. "There's a reason I can't seem to quit this land. I wonder, would you like to join forces again? Another sword at your side would surely be a great boon."

"Oh, I wish," I answered, trying not to sigh too audibly. "But I need your help in a different capacity."

I pointed at the sealed letter and the small box that held the bauble, "Mother is still in Northpoint and I need to send her a letter... and a gift. To get right to the point, you're the only person I trust to carry these."

"Alright," she said after a pause, "I'll do it. Besides, it'll be good to see Edippa again. But you really do need another sword at your side on your adventure. Promise me that you'll find a companion before you continue your quest?"

"Aye, I promise," I agreed without hesitation. I'd already known that I erred greatly in tackling my last adventure on my own, and it wasn't a mistake I planned to repeat.

"Good!" Jenassa declared with finality. "Then let's order some drinks and relax for a while. I want you to tell me all about this new adventure of yours."

I laughed at that, but didn't shy away from her request. After we flagged down the tavern wench and ordered a few bottles of wine, I started nearly at the beginning.

"Well," I said, "I'll skip over the return journey from Northpoint. The real adventure started in a tavern near the College of Winterhold. Night was falling, and I'd just come in to escape the chill, when a High Elf bumped into me..."

So what's next? I touched on most of this in the chapter 15 footer, but to reiterate, next we'll be running the Mod Diary for a week or two as we continue building out and expanding the load order. The 'big rocks' we're looking at include:

After that, we'll be starting our next Mod Cleanup Case Study, which will be looking at Grroott's Solitude. This'll be a good opportunity to explore the special considerations that are involved with integrating a complex worldspace expansion mod, in particular one that seriously conflicts with another major mod (Legacy of the Dragonborn).