This is an ongoing work to bring actual functionality to Execution/torture devices added by zap ZAP (or any other source if i can get my hands on them).

-works on player and NPC´s

-Fully interactive. The garotte for example allows to slowly suffocate your victims, or to keep going until their necks break.

-Nonlethal mode available which will knock you/NPC out for a adjustable time rather than killing.

-Self construction routine. This allows you to place these things via console/spell/cell-builder/other placement mods (description below)

Hard requirements! (if you complain about any error thats caused by ignoring these, i WILL make fun of you!)

(You need to scroll down a bit to see the links for version the 8.0 version)

I believe that you can find one of these on your own.

-Install with mod manager of your choice.

-outside of the regular world.

type the following into your console

This is caused by Nioverride. A quick workaround:

Open Data\SKSE\Plugins\nioverride.ini try to find [Overlays/Face] and make it look like this

; Determines how many face overlays there should be

For special Edition users, this setting can be found in

Only the NON-Lethal variants will work properly.

Not supported and untested.
DD is extremely invasive and has an uncanny talent to break other mods. I´m not saying that its absolutely incompatible, but if it DOES cause issues for you, I cannot help you.

-All mods which place the Player or NPC´s under an Essential Alias will be problematic, since these characters cannot be killed by anything

-If heads dont get chopped of, you probably forgot requirement number 1. Or installed the wrong version.

How to summon Devices into the World

-Go into the MCM and klick "Enable Spells on the first page. (spells are hidden by default to preserve immersion)

-you will now find spells for spawning devices, as well as commanding NPC´s into devices under the "Alteration" magic tab. 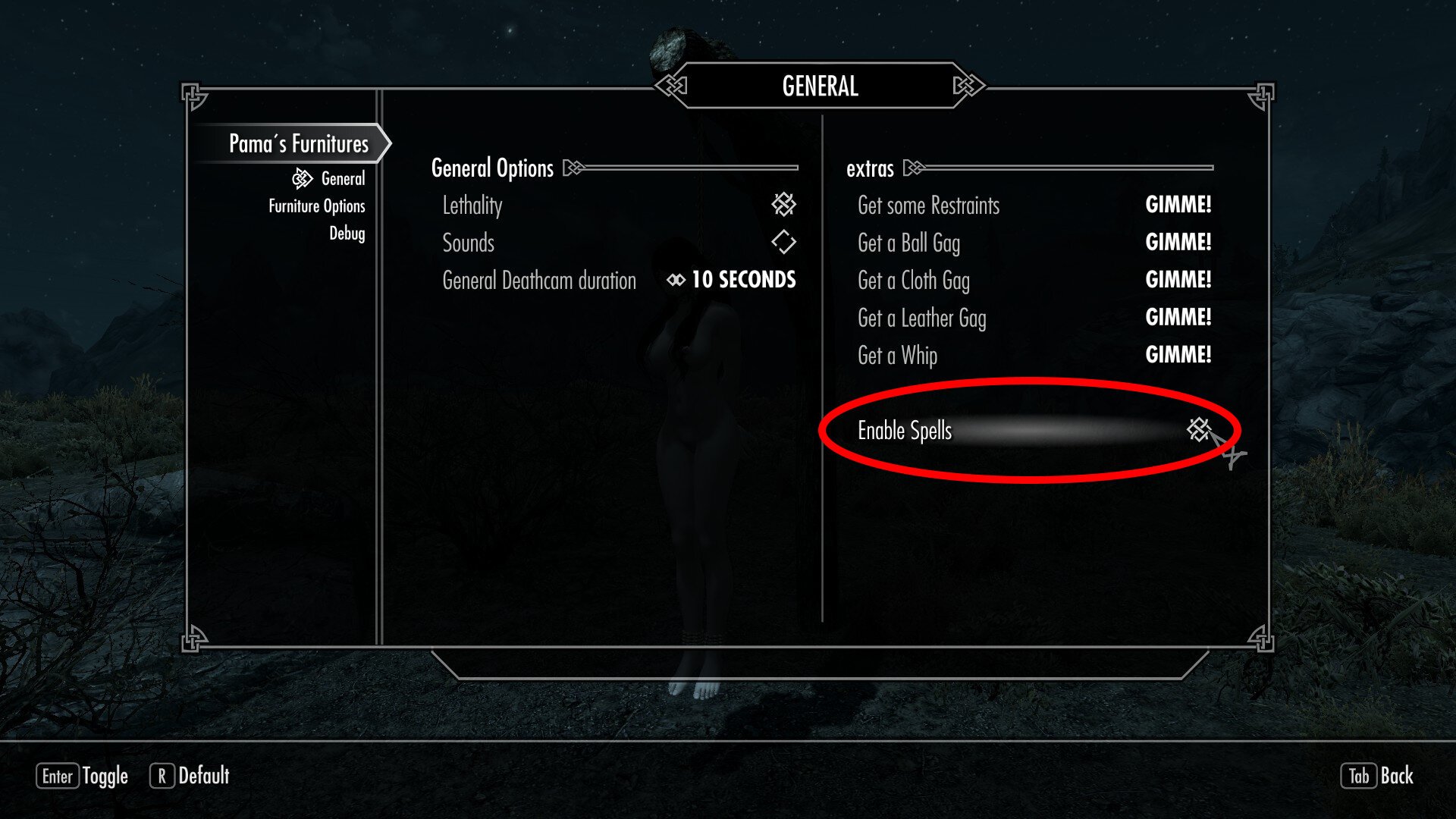 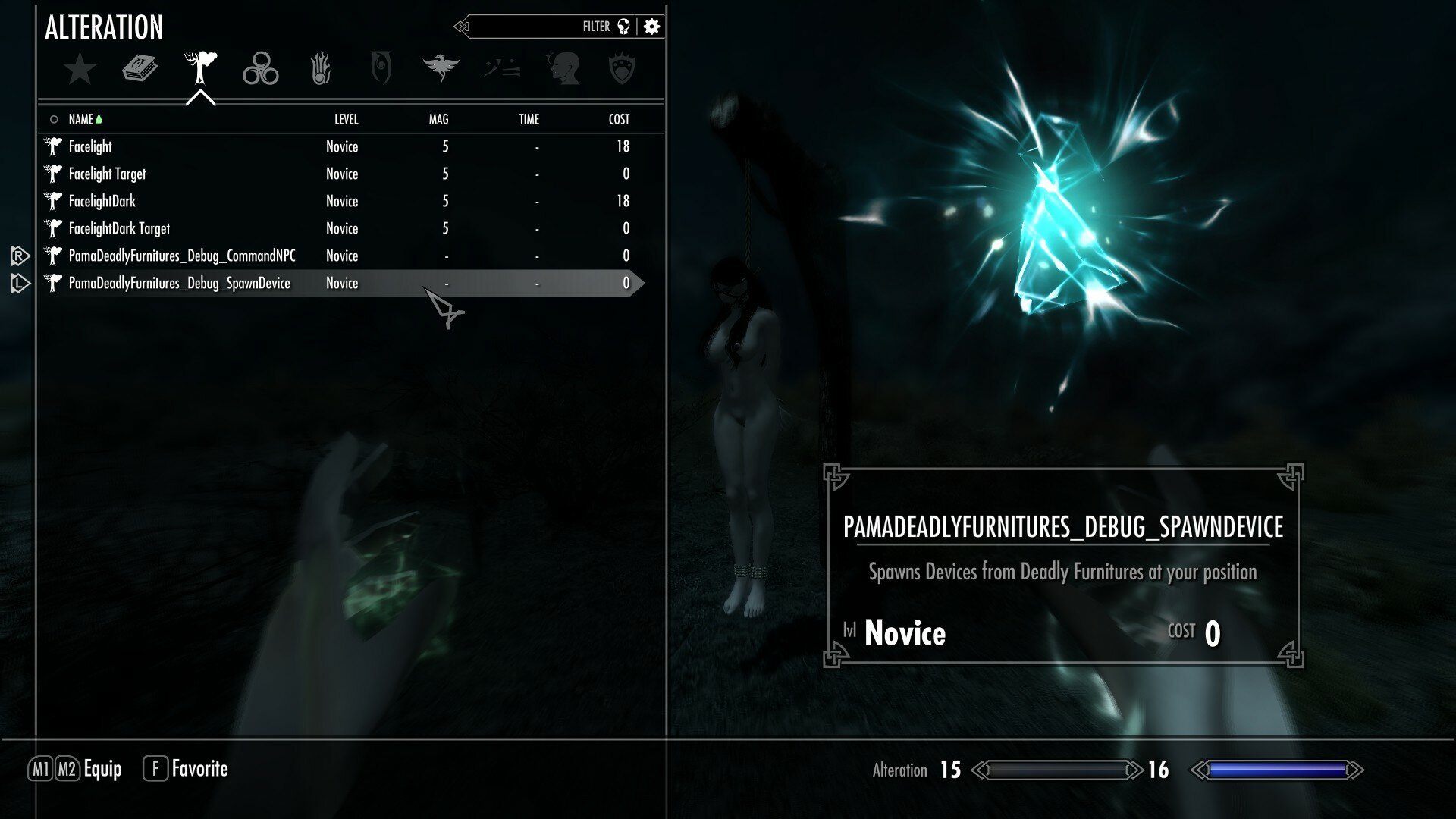 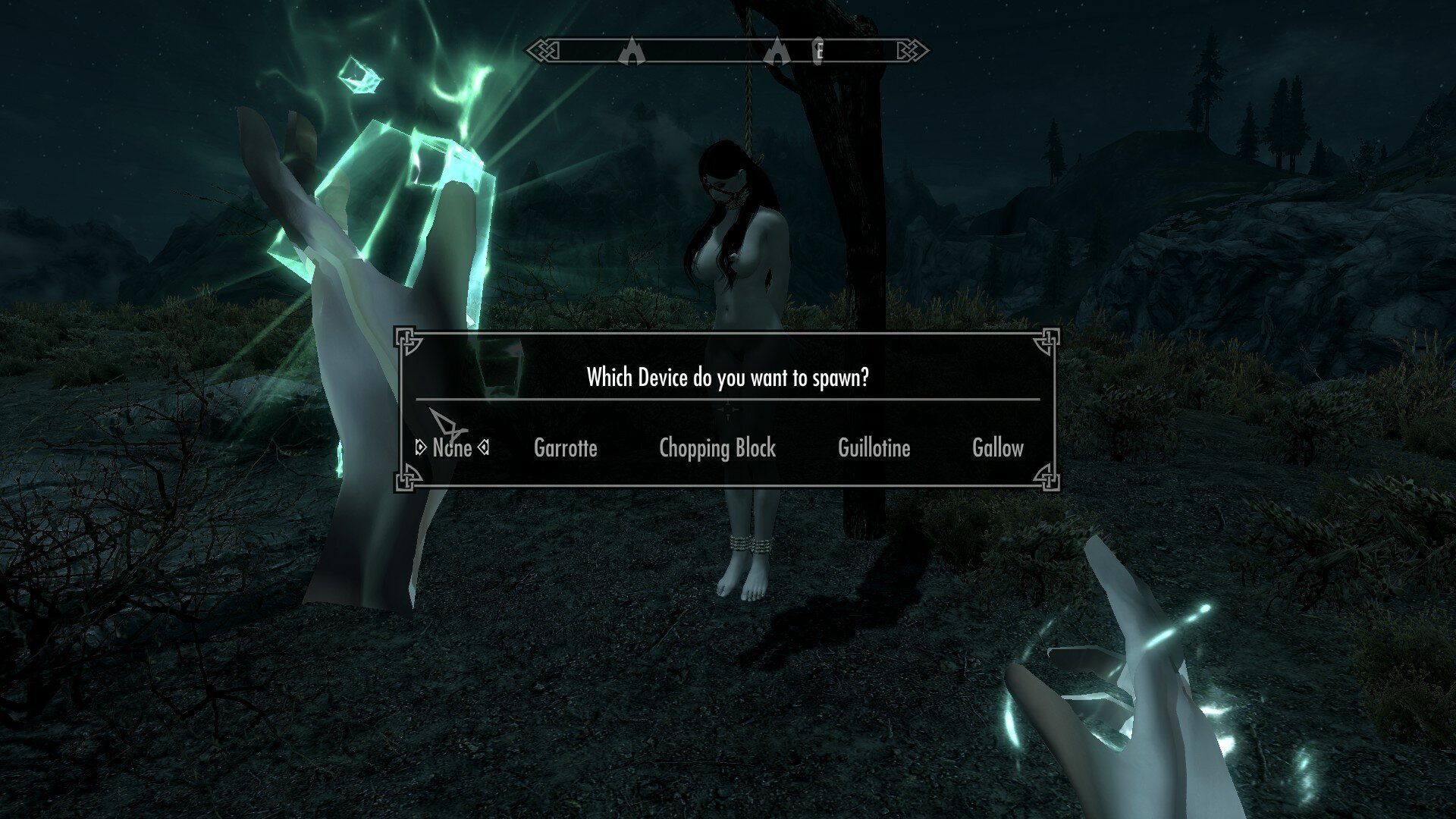 If you want to vote on which device i should do next, Want exclusive early access to new Stuff, or Just like my work, consider supporting me:

1. Victim Enters (NPC will be set to restrained, so they will remain locked)

2. turning the wheel will increase "intensity"

-initial intensity is 0. nothing will happen

-on intensity 1, victim will start to loose health every second. damage increases slightly every second (this is to ensure characters with high health cannot out-regenerate the damage)

-on intensity 2, the damage will be dealt at double the speed.

3. If health of the victim reaches zero or "intensity" reaches 3, the victim will die/be knocked out (depending on lethal/nonlethal settings)

4. NPC´s have to be released manually by turning the wheel again.

5. if set to nonLethal, the player will be ejected automatically after an adjustable time period

-damageNPC: the initial value dealt to NPC´s every second, if intensity is rising.

-damagePlayer: the initial value dealt to the Player every second, if intensity is rising.

-wheelID: For t.ara to use. select the wheel here (this is only used by the self-construction routine. Modders wont need this.)

-humansound0: sound to be played while intensity = 0

-humansound1: sound to be played while intensity = 1

-humansound2: sound to be played while intensity = 2

-humansoundFinal: sound to be played when Character dies/gets knocked unconscious

-lethal: when set to true, characters will die. if false, they will just be knocked unconscious.

-deathCamDuration: controls the deathcamduration IF the player is killed BY the Garotte. when lethal is false, this will control the time the player remains unconscious.

-wheel: select the individual wheel you want to associate with this garotte.

the Garottewheel needs to be fitted with the helper script "activatorForExecutioner"

its property "targetFurn" needs to be set to the Garotte

-Player or follower uses the Block, He/She will be registered as the victim and locked in place. someone else can be made to use the Block by using the"setFavorState 1" console command.

-if it doesnt find Guards, it will grab the nextbest NPC´s

-if someone other than the player/follower is being executed, your follower will by default asume the role of the executionerGuard

-if someone other then the player is beeing executed, The player can assume the Role of the executioner by using the Block AFTER a victim is in place and BEFORE someone alse has arrived to do the job.

-Block: set to PamaFurnitureAlias of the zbf Quest

cuffs: the type of cuffs to automatically equip on the victim. the default zbf cuffs break the PlayerLocking due to their enchantment. please use something without an effect if you want to change it.

followerAlias: This is used to find yhe current follower. Can be changed if a custom follower mod is used.

Predefined Executioner: this can be set to a certain Alias, if you want a fixed actor as your executioner. for example if you want to use this for a scene in your own mod. this should obviously only be changed on a specific reference, rather than at the BaseObject.

If you want to spawn a new one, you need to spawn in the basic table first, and then start the self-construction routine by activating it. (interacting with it)

Just as you would expect if you pull the release handle while someone is inside, that someone will die.

The MCM option "Autoplay" will lock you in and kill you automatically after an adjustable time.

Otherwise you have to pull the lever yourself.

When you command an NPC to use it, you need to wait until the cuffs appear before leaving command mode. otherwise the NPC can escape.

When the NPC is in Place, you have to activate the release handle to start the execution.

After an execution, you have to raise the Blade first, before someone else can enter the device.

Has a regular Pole, as well as a wall-mounted version.

Has 2 different animation styles (legs tied/legs free). preferred Style can be set in the MCM. Randomizer option is available, too.

Loss of bodily fluids can be MCM toggled.

Reacts to the lethal/nonLethal setting in the MCM. If set to nonlethal, the device will release the player after falling unconscious. (duration corresponds to the deathcamduration)

-If an NPC enters it, he/she will stay on a chair/log until the player starts the actual hanging (by interacting with the victim)

-If you hang yourself, you will stay on the chair/log until you press space/shift/E

-You can decide to just give up or try to start a escape minigame.

-If you decide to try to escape, keep smashing spacebar until the rope breaks and before your health runs out.

This can be attached to any Type of Furnitures which are supposed to be painfull, but not deadly.

-NPC´s will be locked upon use. You need to attack the Furniture to release them.

-healt will be reduced. It will dance around 1/3 of the victims health.

-humansound: sound to be played when active

-If you want any modifications for Use in your own mod, just ask. I´m always happy to help

-NOT FOR COMMERCIAL STUFF

-if you want to use/upload it somewhere else, please give proper credit and include a link to the original.

Also, check out the Gallow:

-very Special thanks to Erholung for Fixing the Wayrests collision Model

-Kalmah for the permission to use some of his animations

-To All my Patrons for the support, love you Guys