This is the definitive Solution if you want to execute your followers by hanging, or want this Experience for your Dragonborn.

An easy to set up kit to build a fully Physics enabled Gallow, which can be used to torture/kill characters.

- An All new System which allows for the use of a real Havok-enabled rope to be connected to the victims Neck during Ragdoll phase AND animations(!)

- Fully self contained. doesn´t require any Quest scripting to work. Just Place in the world, set references to Lever/wheel, and you´re good to go.

- Torture functionality: Hoist victims up to choke them, rather than killing them outright.

- victims can be released without killing them

- corpses can be removed from the rope, without breaking the bindings

- automated mode available. useful if you want to kill yourself

-Let it overwrite ZAP8, ZAP8+ and Heretical Resources if asked

How to use on yourself

-You should see the notification "Gallow Ready" when approaching. if not, punch it (or just try activating the lever/wheel) it will then ready itself.

- It is set to automated if used by the player, so just enter it and see what happens.

How to use on NPC´s

-Command your follower to use the Gallow Furniture. Or use the SetFavorStat command for any other NPC

-using the Lever now will do the obvious thing.

-you can use the Wheel at the side of the Gallow to hoist your victim up, as seen in the screenshots. Victim will loose HP if you do this.

-punching the Gallow will bring the victims back to its feet. ("punching" = "attack")

-punching the Gallow AGAIN will completely release the Victim

-if your victim IS DEAD, punching the gallow will remove the corpse and reset the Gallow

Location of this Demo

-There is a identical named cell, if you want to find it in the Creation Kit

-If you want to try out the nonlethal mode, but don't know how to use the Creation Kit, replace the .esp with this one

Minitutorial for those who have a basic idea on how to use the Creation kit:

2. find the Gallow (pan the view slighly up to the north)

4. select the "scripts" tab in the reference window. 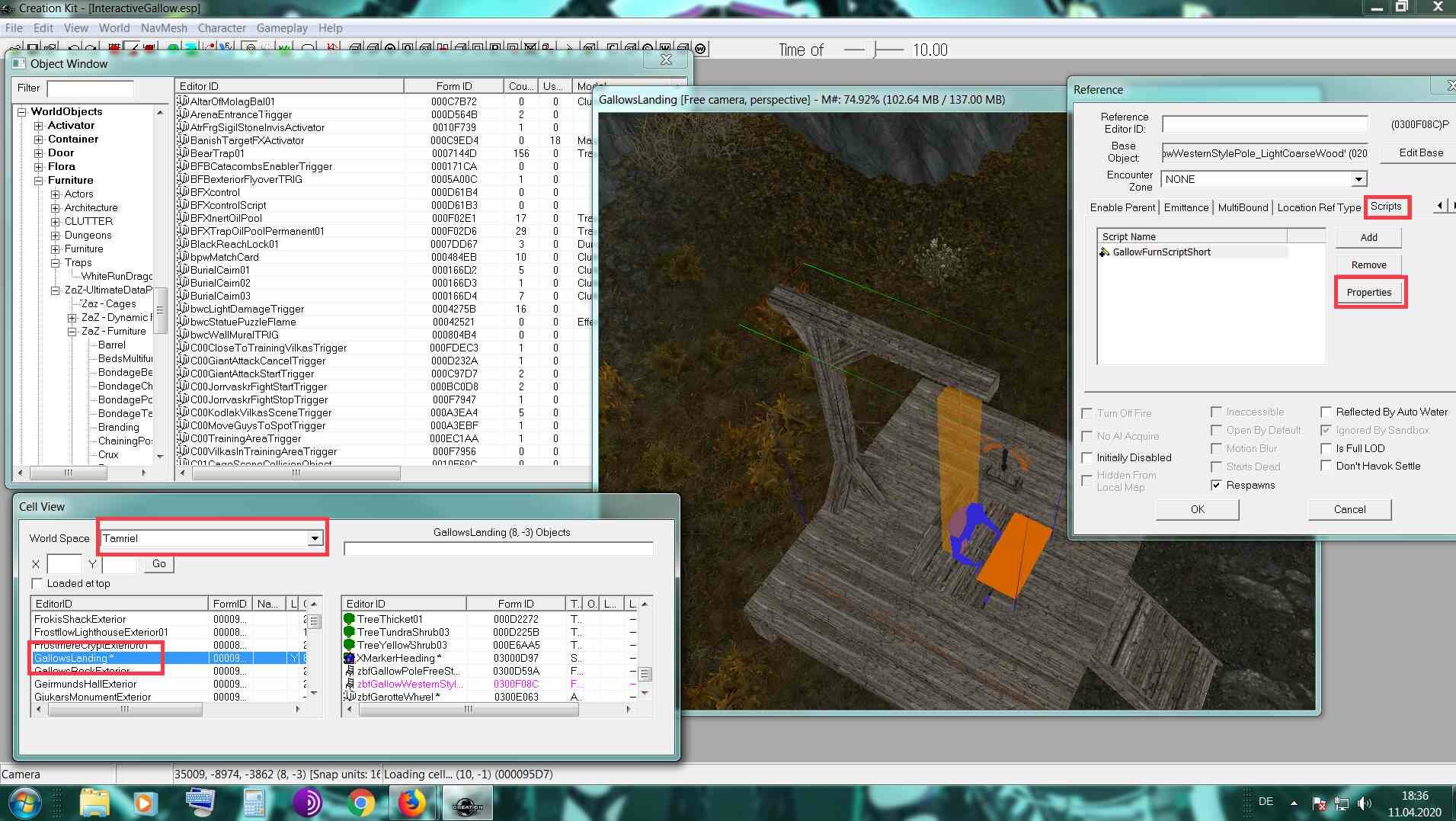 -This does NOT work twice on the Player character. If you Kill yourself with this, you have to restart your Game, or change Character for it to work again.    Solved

-When Loading a savegame in close proximity to this thing, it might fail to initialize properly. Punch It to solve.

-Visual Results in General might vary, depending on victims size. Its optimized for Vanilla characters without any bodyscale alterations. (and maybe a bit smaller)

-3rd Person view can break when PC´s using it. This might happen to larger characters.

Solution: IF this happens to you, try scaling down your character to 0.97-0.95 BEFORE using the Gallow.

If you want to use it, you need the non-Lethal version of this Gallow (see above)

How to set up? -> Manual with images is available as separate download.

-Dummy: select the Rigid body dummy. (you might want to look for its FormID in the Cell View)

-wheel: Select the Wheel in Render Window ( Any kind of Activator can be used instead of the GarrroteWheel)

-Lever: Select the Lever in Render Window ( Any kind of Activator can be used instead of the this specific Lever)

-Trapdoor: Select the Trapdoor in Render Window ( Can be any Kind of Trapdoor, including Vanilla ones)

-zbf: select ZBF from the dropdown menu ( this is for recognition of ZAP keywords)

-Collar: The Rope around the victims Neck. recommended: zbfCollarRopeExtreme02

-cuffs: the restraints you want to have equipped on the victim. used in demo: zbfCuffsRope02

-tieFeet: leave unchecked if you dont want the Victims Ankles to be Tied up

-automaticForPlayer: check if you want the furniture to go through an automated sequence when activated by the player

-removeCuffsOnRelease: check if you want to remove cuffs on (Alive)Released Victims

-nonLethal: toggles the nonlethal mode on. Characters will go unconscious rather than die and will be released after a while.

-deathCamDuration: deathcam duration after you died. also controls the unconscious Phase when nonLethal is toggled on. (This value Only Applies, when you are killed by the Gallow, it doesn't interfere with other mods that alter deathcam duration.)

should be self explanatory. no sound files are selected yet. suiting files will hopefully be included in the upcoming ZAP9

You can use this However you like. Just send me a link if you include it somewhere.

If you need additional info/Help/alterations for usage in your own mod, just let me know. I´m always glad when i can help

If you like my work and want to support me, consider becoming a patreon!

-t.ara for all the ZAP Stuff, a swell as the initial impulse to start this thing in the first place

Check Out my other scripts for ZAP Furnitures: