Welcome back! I hope you're having a good weekend so far. My original plan for today was to finish polishing off Raven Rock and then maybe look at some more landscape/location integration work. However, my review of Fresh Women Darkness yesterday got me thinking, and I kind of feel like tackling TAWOBA instead. This probably won't lead to an install today, but I want to at least review the latest versions of the assets to understand what they have to offer.

The Amazing World of Bikini Armor has been a staple of NSFW modding for literally years. It's gone through many different incarnations, starting as a series of separate mods, getting a third party anthology release, and several revivals and improvement cycles by different authors. We'll be using "TAWOBA Extended," by Monty359 with BHUNP bodyslides by OmegaDarkKnight. This will ensure we have matching male meshes and future-proof against HIMBO integration down the line. We'll eventually also want to get TEWOBA as well, since it contains some additional sets, but it's a lower priority on account of being female only.

But surely, with a mod this mature and long-lived, I can just install it out of the box, right? To be honest, I could. As long as I kept the mod in a bottle and didn't mix its gear with other sources, I'm confident it would run just fine. The problem is that TAWOBA uses non-standard slot assignments for the gear, and that in turn means that it's prone to have unexpected results when connected with other gear. While TAWOBAE already fixes this in its plugin and native (CBBE) bodyslides, the BHUNP bodyslides are built against the originals and we need to convert them. Compare the TAWOBA slot assignments with the Devious Devices matrix that most mods seem to use these days:

While the remappings aren't perfect (notably, right pauldrons are generally not going to work with male or futanari characters), they're a pretty solid step in the right direction. Most likely, I'll just remap all pauldrons to Slot 48 even though this closes the door on dual-pauldron configurations. A lot of my mental imagery of how bikini armor fits into the Skyrim world inspired by this lecture below, and one of the takeaways from it is that a single-pauldron configuration is believable, but I imagine it would generally go with the dominant hand, so losing right pauldrons for all men would deviate from my aesthetic vision. Beyond that issue, otherwise I think we're in pretty good shape - butt plugs and genital piercings are rare enough in-game that their conflict with bikini armor should be minimal.

Matters are furthermore complicated by substantive differences between the source plugins. At some point, TAWOBA and TAWOBAE diverged in terms of content and now there are items which are missing from TAWOBAE compared to the main branch. This will require side-by-side comparison and merging to ensure all the content makes it way into the game.

Considering these roadblocks, I'm going to continue shelving TAWOBA until, at a minimum, I can work out an efficient solution for going through and batch-changing the partition (body slot) assignments. I have a couple of ideas, but I'll need to test them out before committing to a solution. I could probably adopt BHUNP TAWOBA right out of the box, but I'd just be signing myself up for the same work (and more) in the future, since the default slot assignments are not going to play nice with other mods - notably, bikini bottoms just won't work at all with SOS.

Anything New on the Nexus?

As of the time I'm writing this, there isn't much to harvest off the nexus. Of course, Toys and most of its ecosystem debuted on the Nexus today, but I'm not quite ready to update all of those yet. Two mods caught my eye: another location overhaul by Ryn, and a SPID-based difficulty increasing mod. The second mod looks promising, but it requires a lot more analysis before I commit to adding it. However, let's download the Ryn mod and see how it looks.

This mod is an ESL-flagged ESP file with no external asset conflicts. It had no errors but required navmesh edge link cleaning. Cleaning revealed no issues, and the mod contains literally one conflict - a repositioned static that we'll allow to prevail. So far so good! 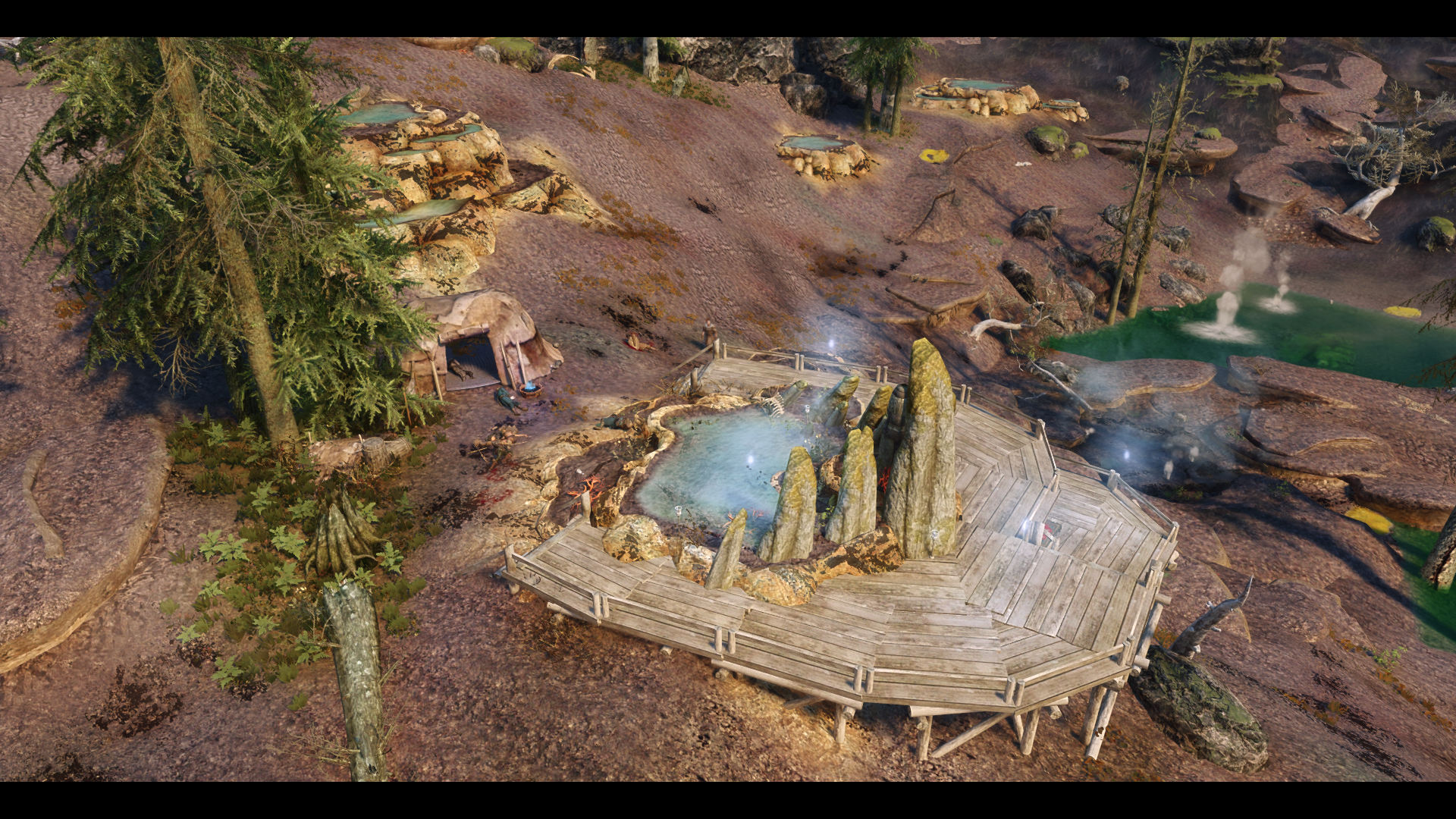 This one isn't elaborate as the Ritual Stone, but it looks nice and other than needing the grass cache refreshed it seems to be fine. We'll be keeping this one.

Next, let's get Frostfield up and running. I know I said I didn't want to do navmesh today, but this one should be a very minor operation. We need to do just a couple things here. First, we need to go into the mod and move that one idle marker and, if possible, delete that unnecessary staircase. We'll do that in the CK. 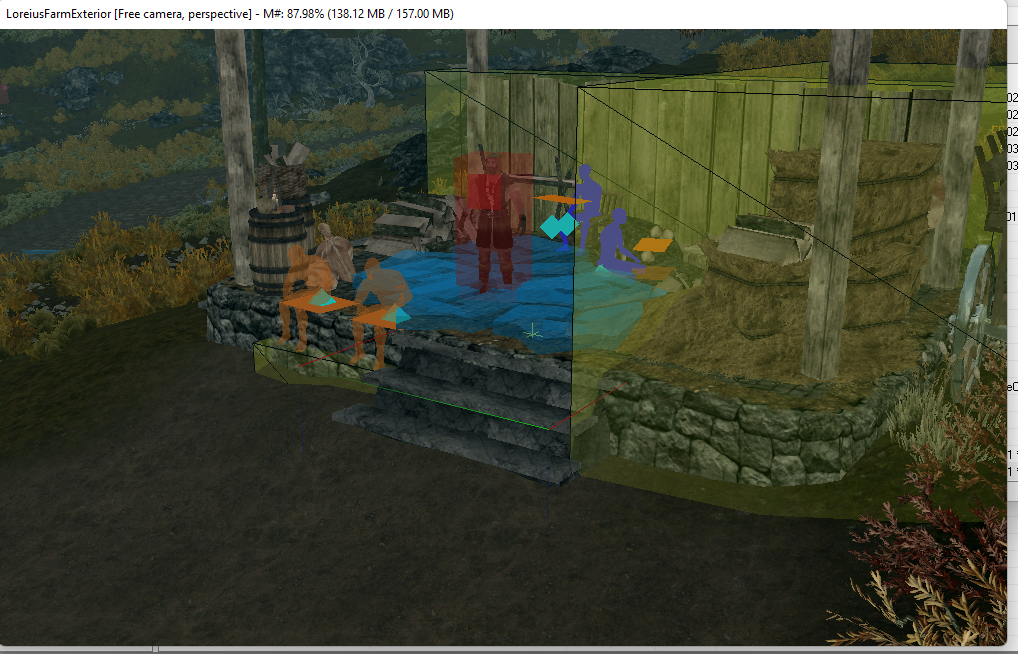 Well that's interesting. There are actually two idle markers that I need to move. If you recall the 2/15 diary, the two corners are unblocked. Let's rearrange a few things. 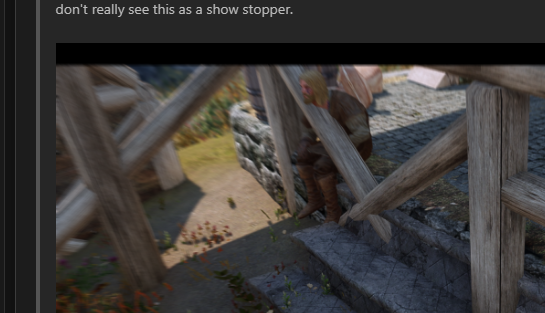 Here you can see the new positions including some extended navmesh to let actors reach the area. 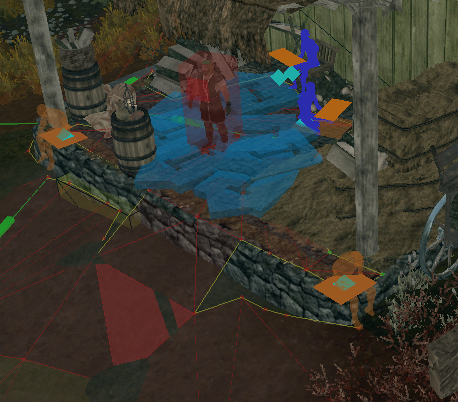 With that part done, we need to clean the file and then make the punch outs for the hamlet shacks. We'll be doing this in a working file so we can also address the landscape height issue we saw last time we examined this mod. We'll punch out the navmesh for the hamlet buildings and move some rocks to not only support the first shack but also conceal the terrain tear we saw earlier. 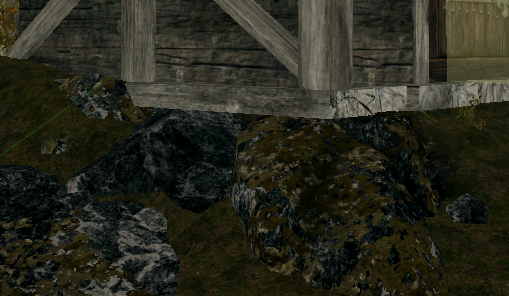 A quick visit to the farm reveals that almost everything is working well. There's a bench that needs to be lowered down a little, and a tree that I need to have in the town accidentally got disabled. Otherwise, we're in pretty good shape. I'll loop back to these items tomorrow to finish up with Frostfield. 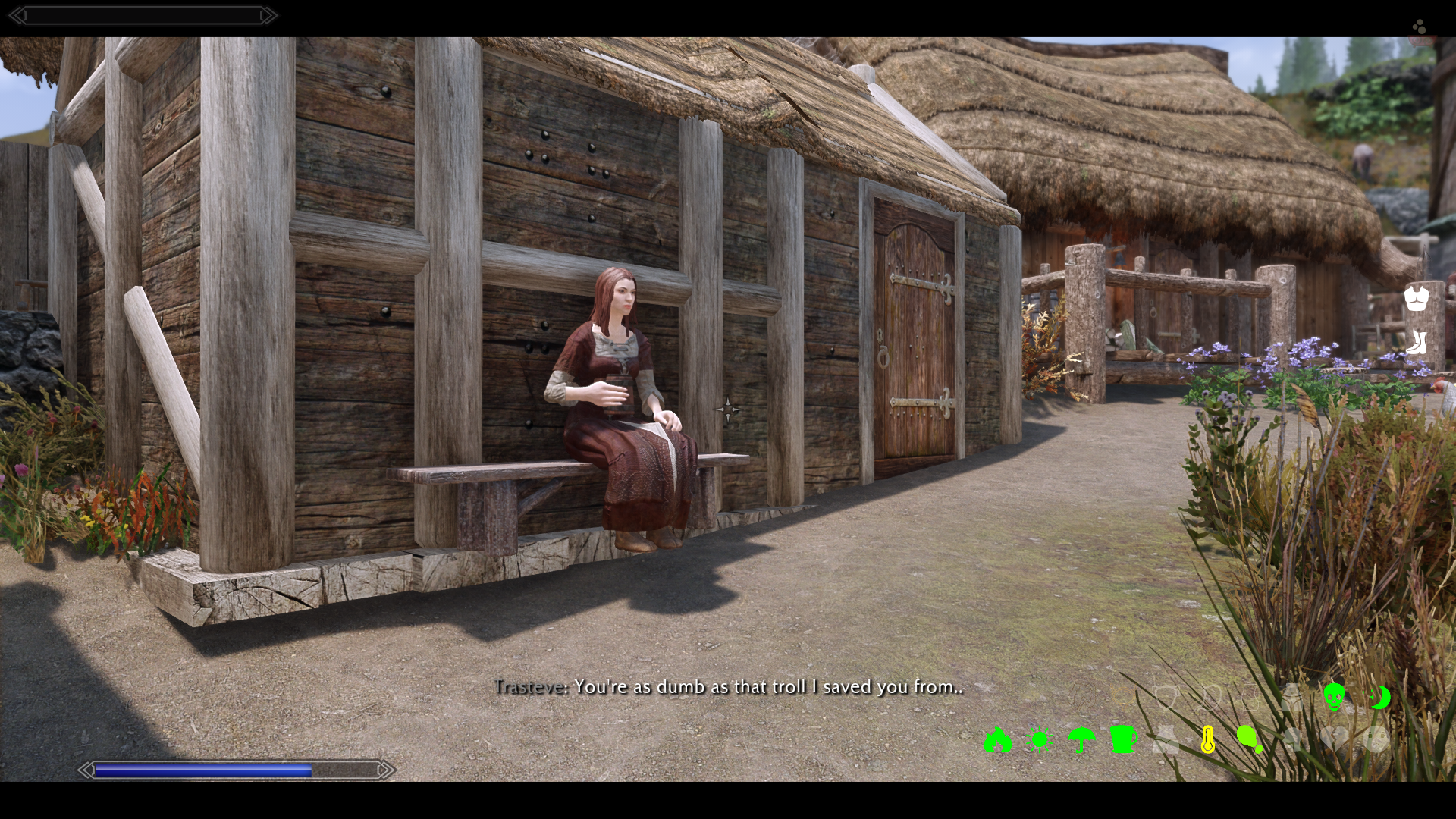 So that's it for today. Tomorrow we'll finish up Frostfield, both in making the small adjustments I described earlier and also breaking up the file for ESL flagging. We ended the day with 1,365 mods installed, 1,379 plugins active, and a final load order index of EF.