Welcome back, everyone. Yesterday we did some fairly involved outfit integration, but ran into a wall trying to do a mashup outfit without heavy Outfit Studio work. If you followed the comment section, you'll know that I had a sudden insight hours later when I remembered I had made a mod last year that has the potential to exactly solve my problem. Today, we're going to get that outfit set up and also do some bugfixing.

If you recall out issue from yesterday, we had some requirements for the armor piece to use with Star Cloth for the guards.

My sleeveless leather armor mod already seems to hit all those marks, and it has a long-delayed update that'll work even better. A while back I secured permission to redistribute assets from Black and Gray Leather Armor for a mod project I had tentatively called "Leather Mania." Then I got distracted with other tasks and never finished it

We're going to finish that mod today and then use its assets for our Manantis guards. This will be a little time consuming but technically straightforward as we already have the foundation in place from some earlier work.

We'll start by only loading in the mods we are going to use for this effort in xEdit... we want to make our redistribution version first and keep it free of references to my private mods. We'll go back and make the private version after.

First we want to take the entire black and gray leather armor mod and deep copy it into our new Leather Mania file, using this command: Next, we'll change the form ID of all the novel records to match the new file (we'll leave the vanilla overrides alone) We'll then repeat this process for select records from the no pauldrons mod: With these, we need to manually change the outfit records to point to the BAG cuirass leveled list instead of the no pauldrons one before we change form IDs. Once that's all done, we'll clean masters on the new file and then reload xEdit with just the new mod and its masters. That'll avoid any potential confusion from duplicate editor IDs.

With that done, the next step is to create ARMA records for the color variants of the cuirass using the texture sets but not the meshes from the basic colored versions: Likewise, we'll create new ARMO records that point to the new ARMAs, and populate the new variants into the cuirass leveled list.

Finally, we need to go in and create the tempering COBJ records. We'll do that by cloning the vanilla records and then adjusting them to match the new armor types. We won't create enchanted versions for this mod - users can use ALLA or a similar tool to make them if they want. Now I have to do a little backtracking because I forgot to copy over some important dialogue patches from the no pauldrons mod. Having done that we'll do the same master isolation process I described above to ensure the mod can stand on its own. And that's that. We'll package the bodyslides and other assets from the underlying mods and post this on the nexus after I get some screen shots... which you can now see below: 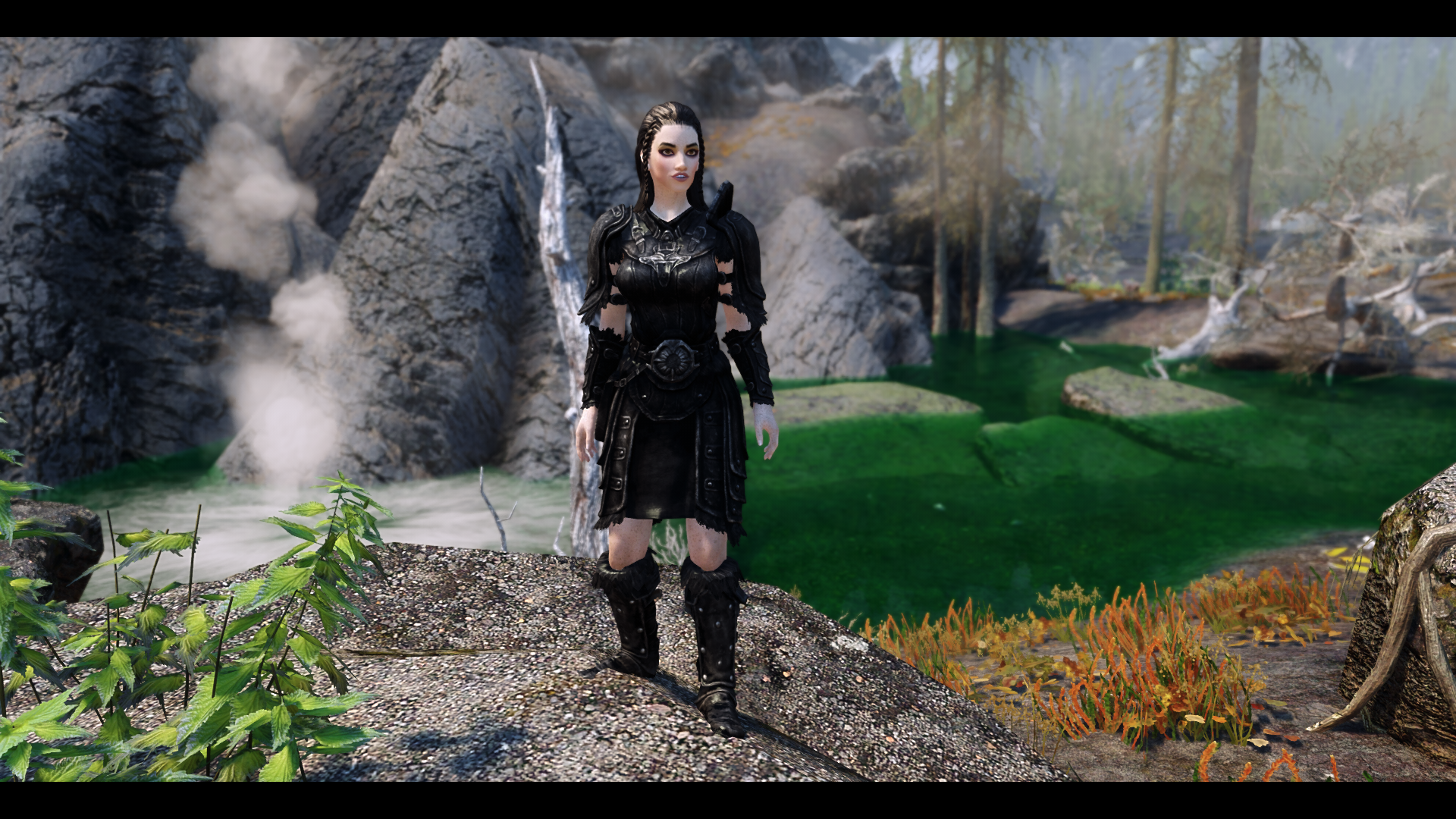 Now that the new leather armor mod is complete, we need to replace my old "no pauldrons" mod with it. We'll use the same approach we took with Phenderix to filter through and replace the dependent records. At the same time, we'll trim some duplicate records out of the release version of Leather Mania - notably we'll rely on my own leather armor randomization lists rather than the standalone ones here. This basically boiled down to changing the form IDs in the old file to the new ones, which caused all the changes to flow down into my existing patches. Then I just added the new leather armor parts to my variant sublists and cleaned the masters. After that, we were good to go!

So now let's make our armored guard outfit. The female version looks pretty good, but the male still has clipping issues. I believe this is because of a body mesh conflict between the sleeveless armor (built on the SOS body) and the Star Cloth shawl (built on the vanilla body). So we're not quite ready to go live with this, but we're getting closer. Not quite what I was hoping for as far as results go, but we're getting closer. Something to keep working on in the future, and at least now we have the color variants in the game for the normal leather armor!

The Guard That Didn't Want To Get Dressed

Here's a glitch from my log. Cutting Room Floor guard xx029B63 isn't getting the custom outfit I made for them. Instead, they're getting a fancy mage outfit that appears to be from WACCF. Given that WACCF does some obnoxious script distribution, there's a good chance that's our problem. Let's see.

Here's our underlying actor... and indeed WACCF seems to be touching it. Next we want to see if the WACCF scripts are targeting this actor.

On further review, this guy doesn't appear to be targeted by WACCF's script injection and the issue instead is that the outfit isn't hooked up right. After fixing the outfit with an override entry, let's see how it looks in game. As we touched on during Kirstia's Adventure, the BD Hoodie Schlongs are producing penises that are too large. We'll fix this by adjusting the default median size. For now I'm only going to target the Anthro schlong, which is the one that caused the most issues. We'll override these globals and dial back the size bias significantly. -50 was better, but still resulted in a lot of "knee knockers" flopping around. I tried again with -75 and it seems to be aligning well with the other SOS penises now. We'll have to keep monitoring this going forward as well as look out for other SOS modules with similar issues, but the worst of the problem seems to be resolved.

When we were working on Malacath's statue earlier in this series, I noticed that like Malacath, Shalidor had a snow shader on his chess piece. This is because the chess piece is just a scaled down version of the vanilla statue. To fix that, we need a separate static without the directional material. This isn't a technically challenging fix, but I'm interested in potentially bringing in more than one version of the statue so let's see how many times the game duplicates it.

MageStatue is, in fact, referenced quite a few times.

Three of these reimagine Shalidor as a woman, with only Statue of Shalidor Replacer using a male version. Now let's look at where the statues get placed:

Disappointingly, as we move to integrate New Statue of Shalidor, we find that it implements its lights as separate items. This would be good if it was going to be our sole replacer, but since it isn't this is a dealbreaker. We'll be removing that mod and instead putting a normal Sexy Statue version in the School. I may revisit the New Statue mod as a possible source of a non-animated alternate statue down the road. We'll see. 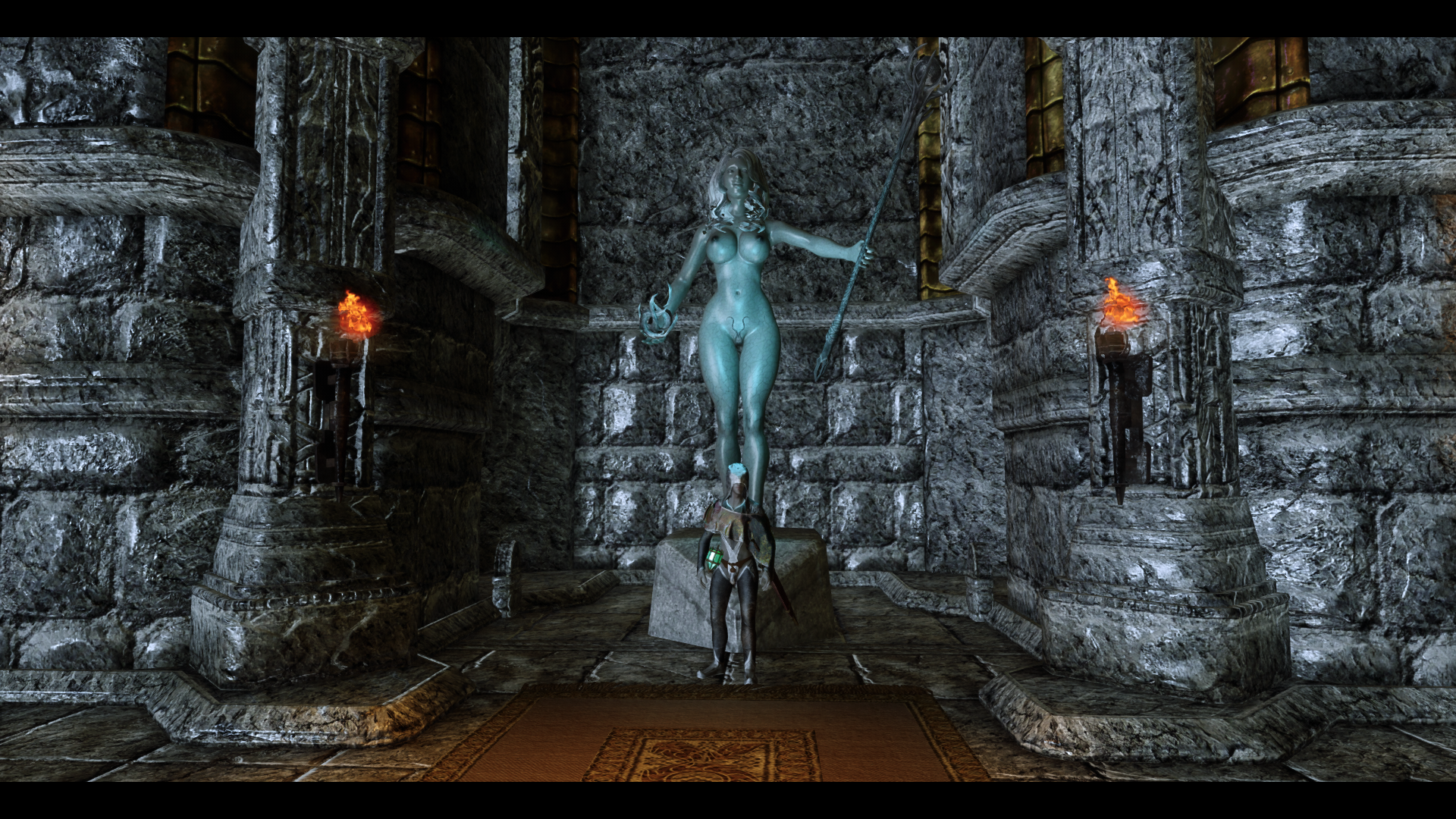 So there we go, a nice diverse blend of statuary for mage stuff, and when people randomly add Shalidor statues everywhere they'll be the female statue instead.

I think that's it for today. Tomorrow I'll find some more substantive content off the list, but this was a valuable loop back to a few back burner issues.