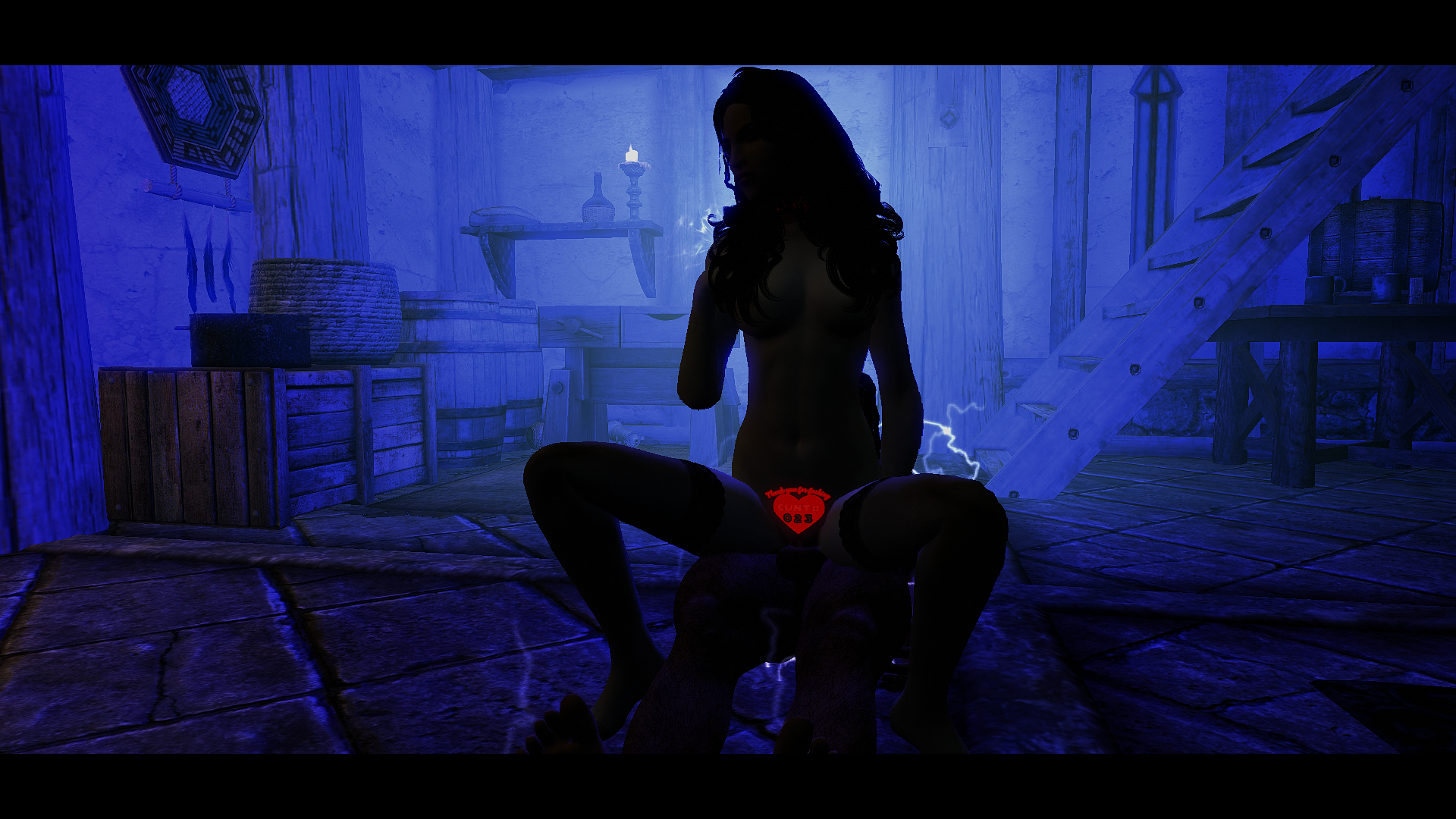 Seeker! Know you now that you hold in your hands the life's work of the great mage Korneum, often called "The Objectionable", though rarely to my face and always by lesser minds, jealous of my intellect.

This is a collection of utility spells that make life easier for the average slave trader. I'm going to start simple and get more complicated as I go, so hopefully when RL strikes and I have to concentrate on other tasks, at least there will be something useful here.

I set up a blog entry with the documentation. t's easier to maintain that way.

Slavers_Spellbook_<version>.7z. is the main mod file. Install that in the usual way.

slavetats_pahe is a quick hack so that PAHE slaves appear with their new names in the slavetats menu. No more trying guess which of seven Bandits is the one you want to change. Doesn't do anything without slavetats, obviously.

slso_exposure_rate tweaks SexLab Separate Orgasms so it doesn't set ExposureRate to 1 during sex. Means you magically induced nympomaniacs will now fuck like the sluts they are.

pahe_slso allows sex training/discipline to be more effective the more times your slave orgasms. Melt her brain and she'll be much more co-operative.

These are basically all wrappers around SexLab Arousal Redux. You can't do anything with these that you couldn't do with the SLA MCM Puppet Master tab, but this allows for a bit more immersion and roleplaying. Essentially, I was doing this anyway through the MCM interface, and I finally decided to make a nicer way to do it.

Currently you need to add the spells through the console. I have plans for a bit of a quest to get them, but on the basis of "keep it simple", I'm doing the spells first and the quest second. (there is a book in Cronvangr Cave now, but it doesn't seem to work yet. Even when it does it should be considered as a stop gap measure).

If I get all that done, then I have tentative plans for conjured restraints (Bound Bindings), some training enhancers. Maybe a vendor, and some options to turn Convangr into a base befitting a vampire late-sleeping slave trainer.

I'll probably move the PAHE/SLSO patch and the SlaveTats/PAHE patch to this page as well, assuming the respective mod authors don't want to incorporate the code.

(I have no idea if it's SSE compatible or not, so I put "no". Feel free to try it out and see) 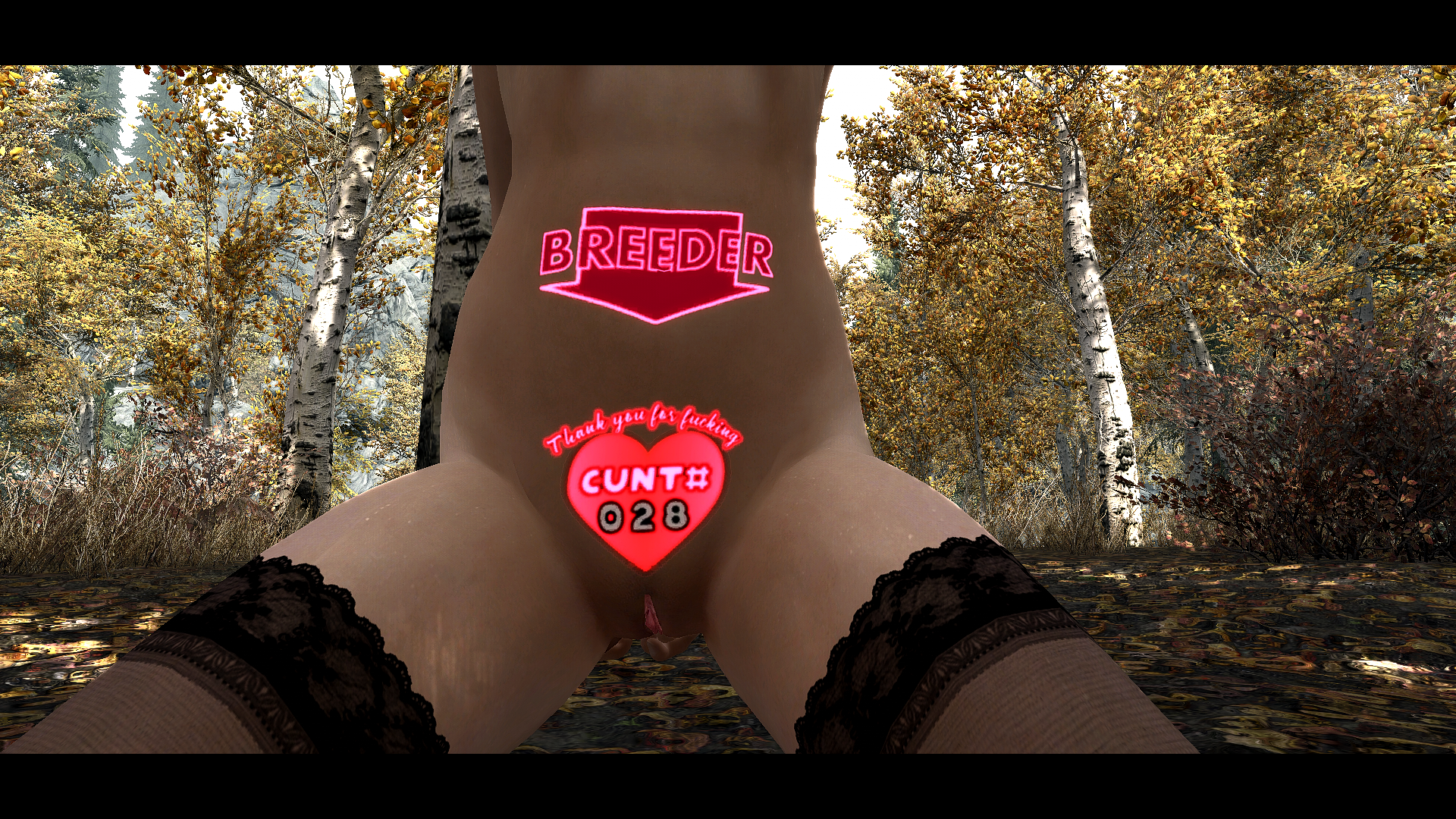 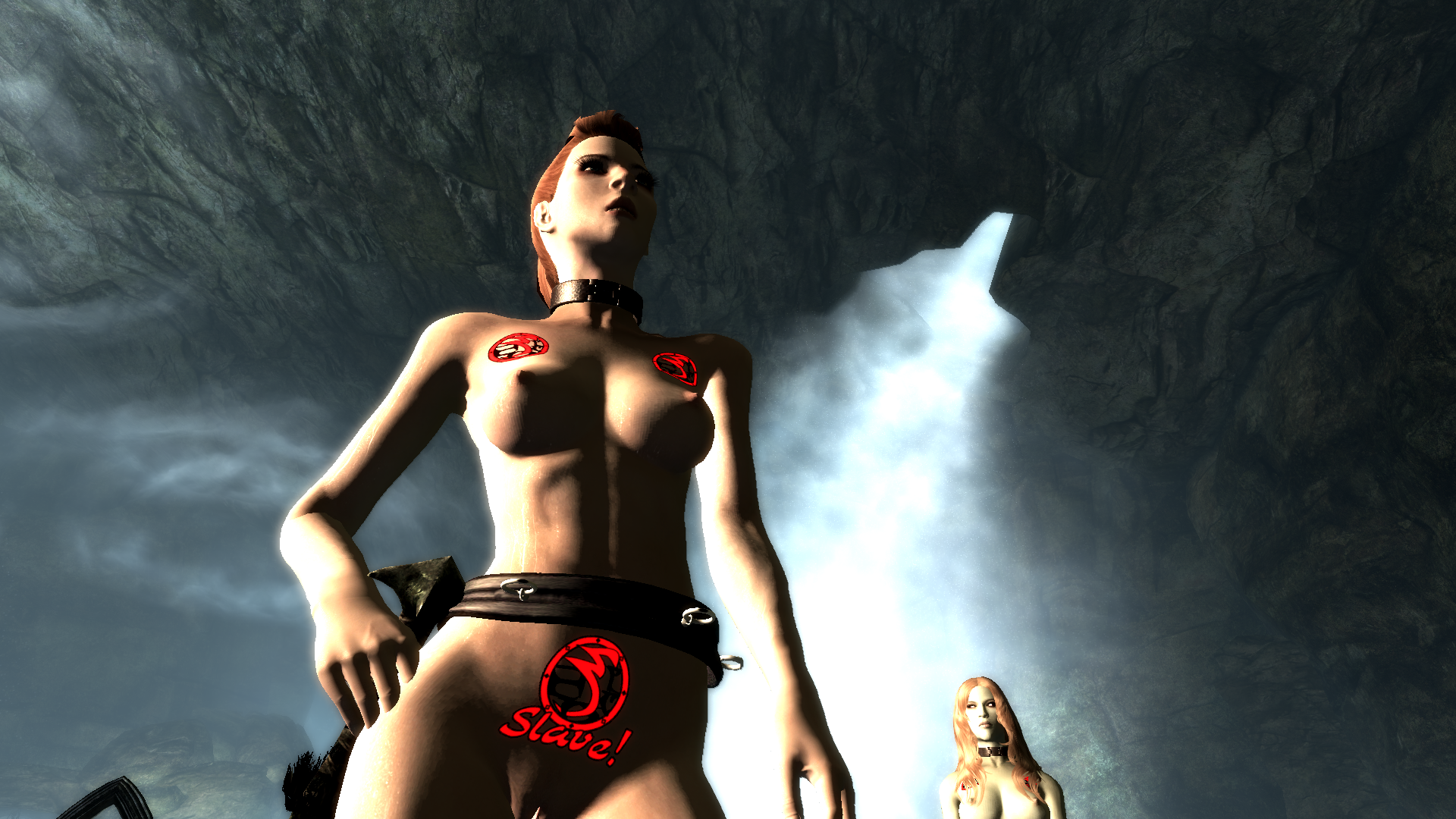 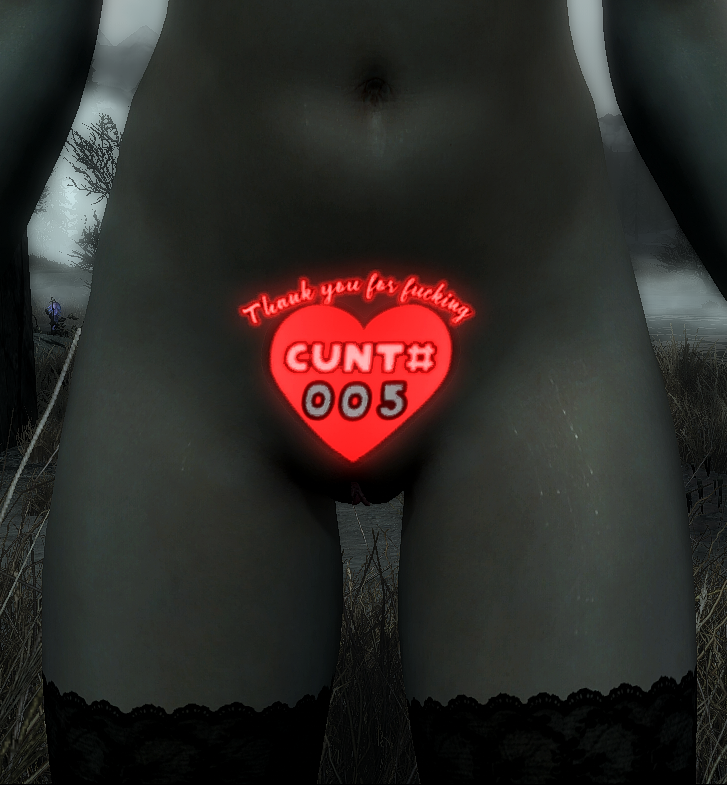 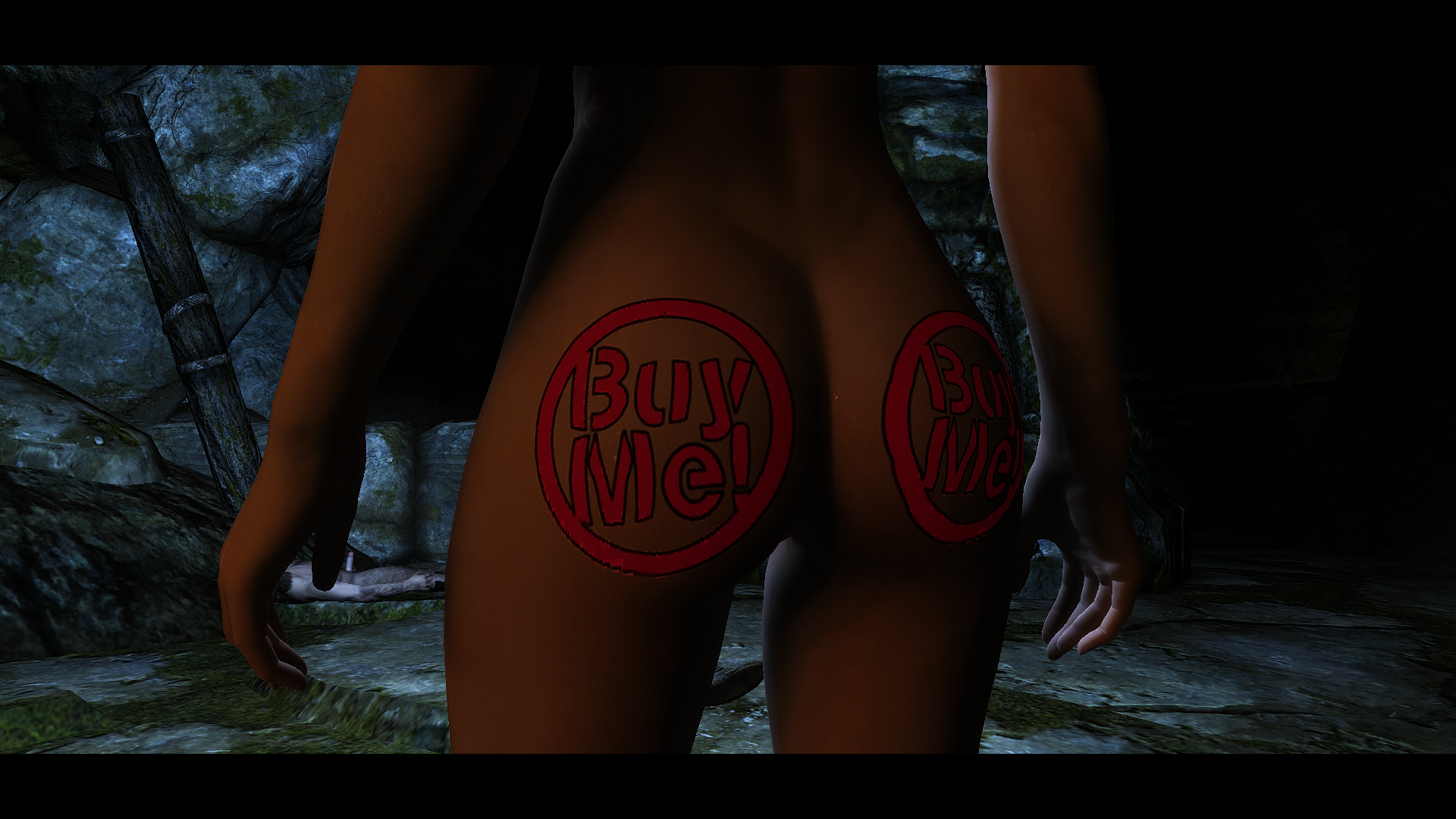 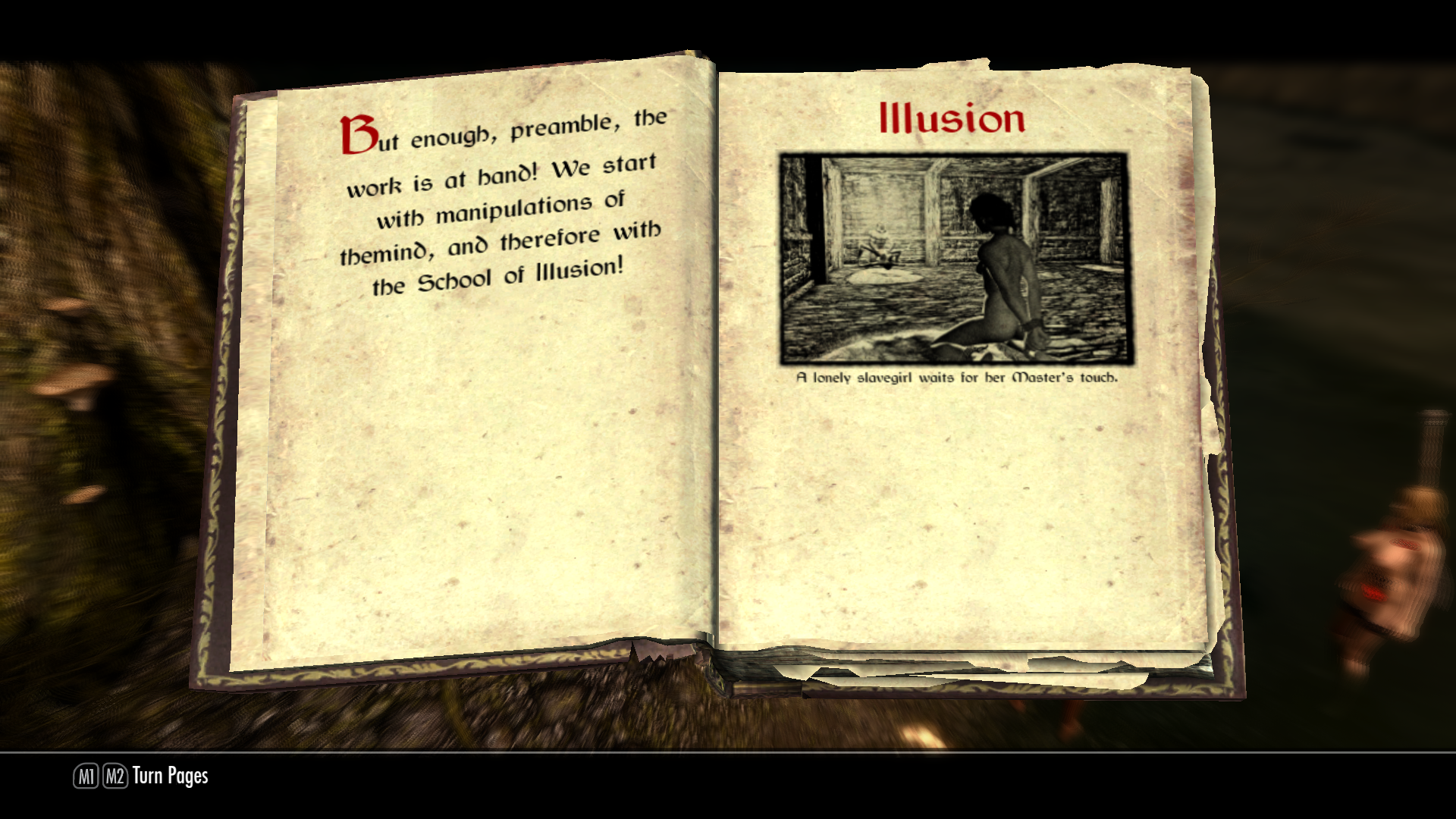 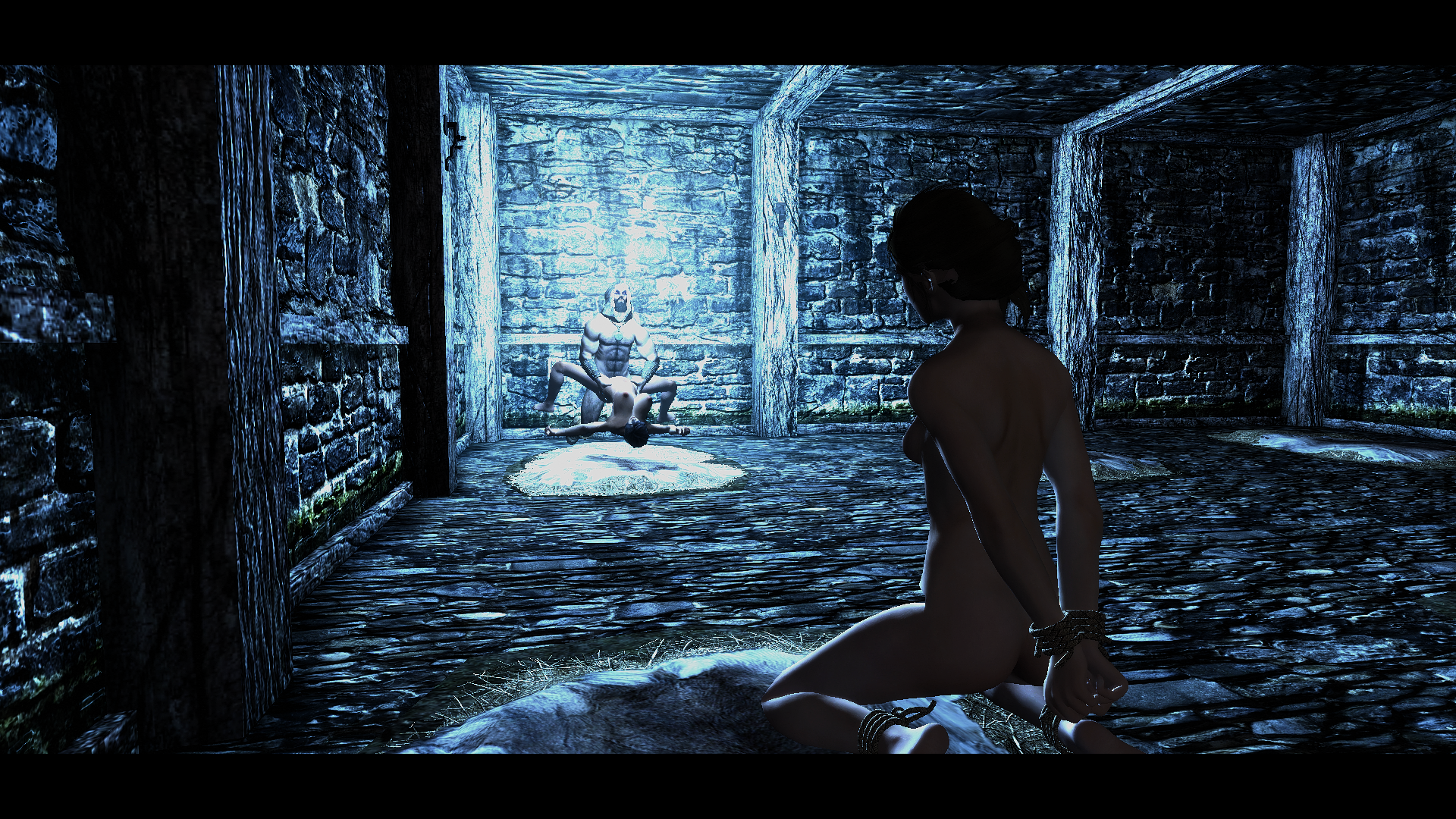 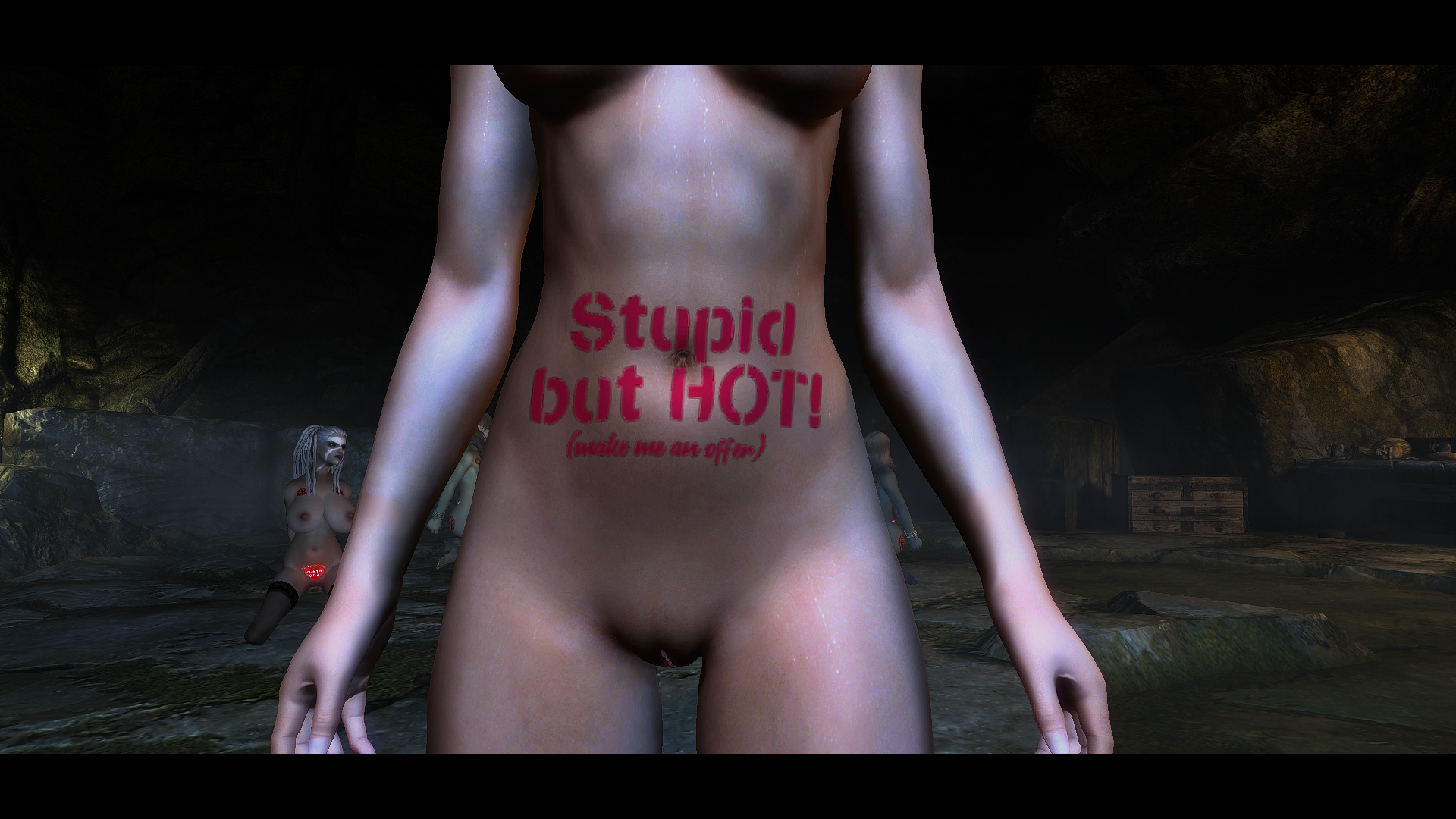 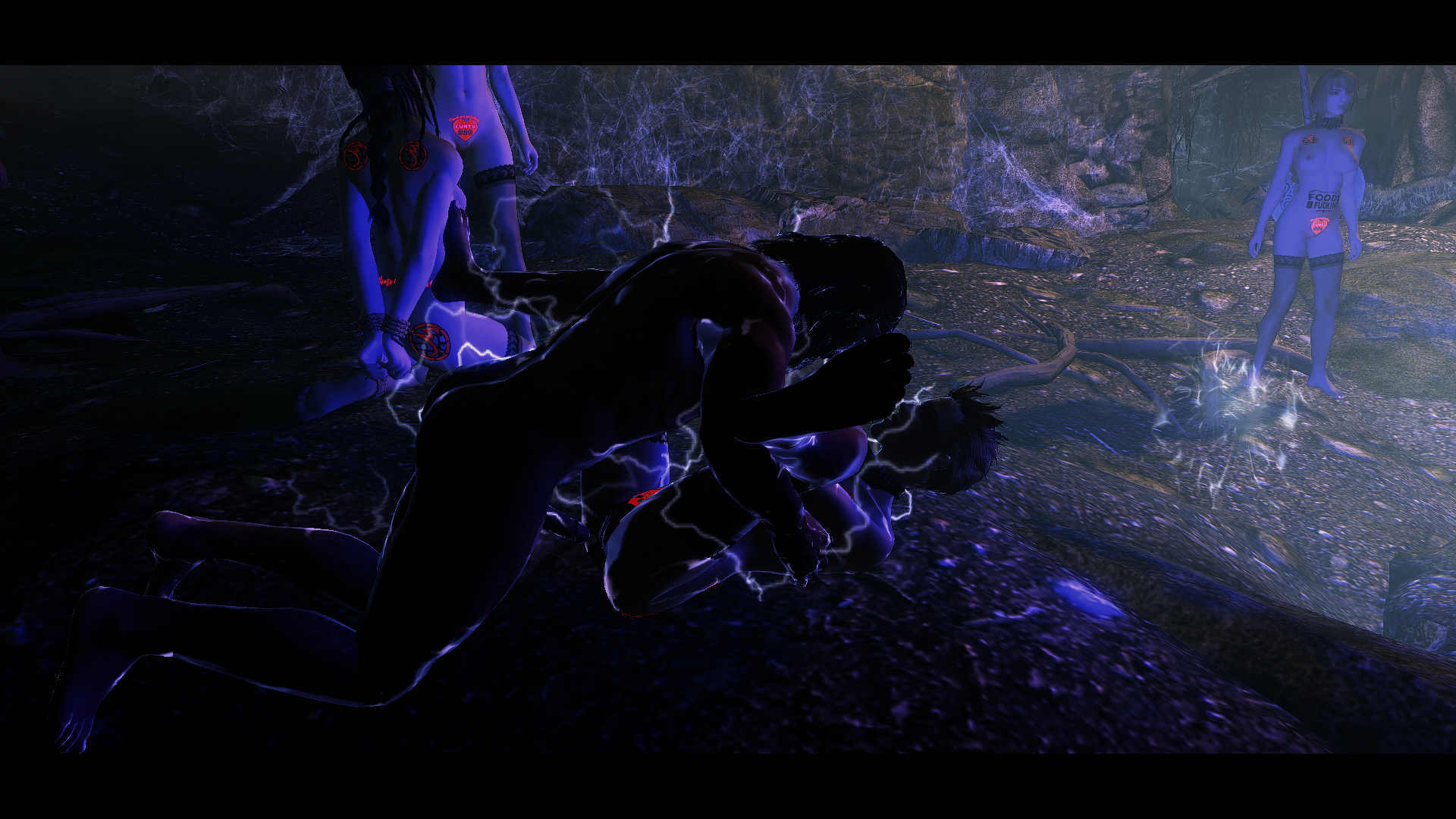 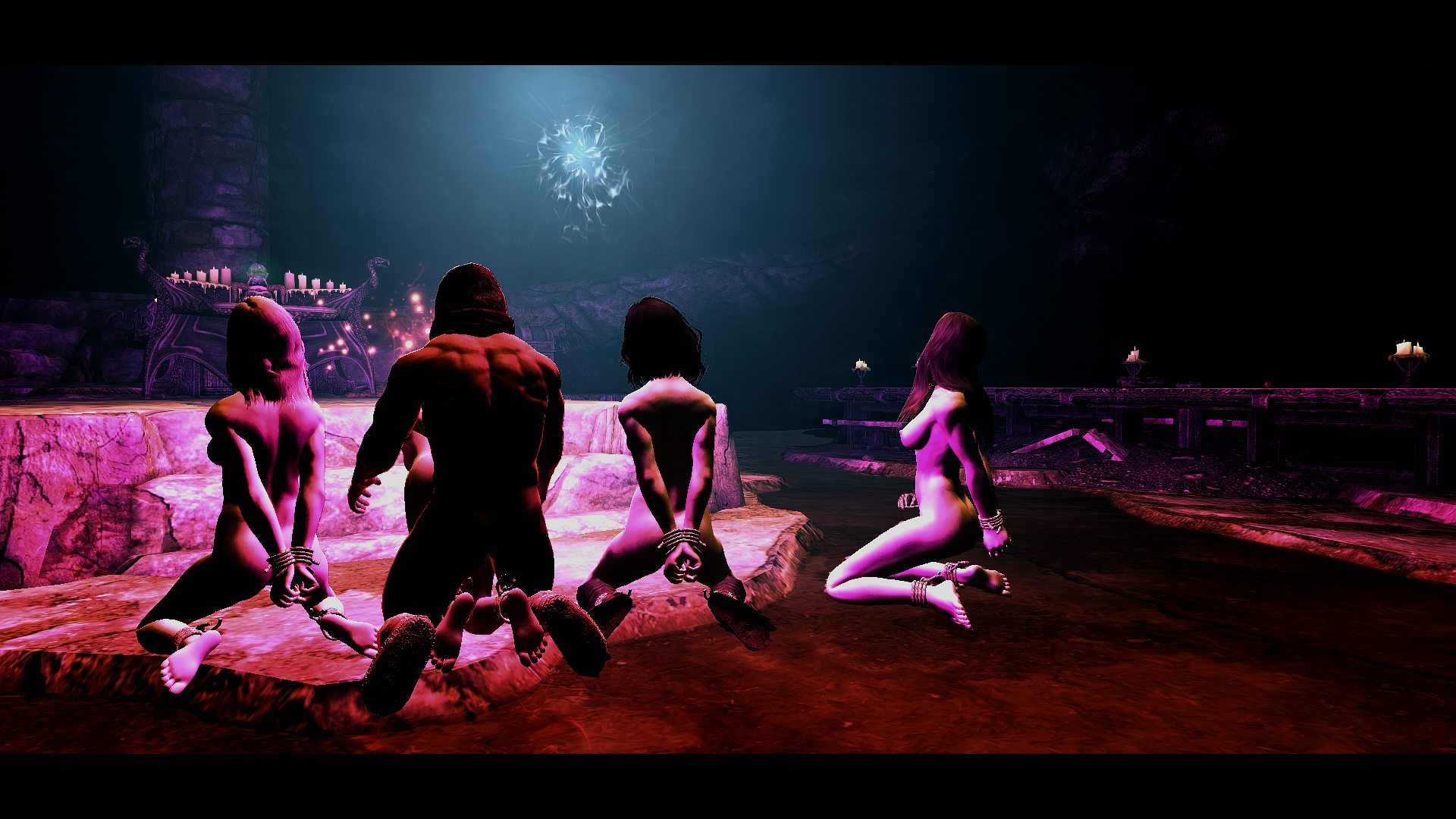 Fixed MCM cheat option and spellbook not giving spells. Bound belt mow looks like a bound item and gets a collar and cuffs as well.Probably loads more I've forgotten.

Just a bugfix release. Combines the fixed esp I posted to the support thread with the resources from v0.0.6. If you already have v0.0.6 working, you can safely ignore this release.

To get the new spells, read the book again.

My new build scripts put the tattoo files in the wrong place. This should fix that.

We have an MCM: Allows disabling the auto-rename function, adding a custom suffix and/or prefix to the slave number when if auto-rename is enabled, and allows the redefinition of the Slaver's Candle hotkeys.

Apply Brand and Assign Serial have both been replaced by a single Spell - Brand.

We have proper documentation. See above for link.

The livery tattoos are now defined in a json file. You can edit this to reflect your tattoo preferences. A special entry can be used to apply the slave's number as a tat.

The Book has had a makeover. It's still on the table in Cronvangr Cave. Read it to learn the spells,. There's also an MCM cheat option to add a copy to your inventory.

Added json files and book illustrations and other stuff that got left out of the BSA last time.

A ton of new spells:

Also, Three tat packs: a set of brands to mark your slave, a set of numbers (tastefully set in a heart over the mons veneris) and some for sale brands. These aren't fully functional yet, so they're purely decorative at the moment. Spells in brackets are WIP and may have limited functionaliy.

The Slaver's Spellbook itself, now better known as Opus Korneum is still sitting on the table in Cronvangr Cave. Next release, I'll make you work a little bit to lay hands on it. The Spellbook has an explanation of the spells, as written by their creator, Korneum The Objectionable. With the occasional editoral comment scribbled in the margins from Drevis Neloren.

* Mandate Nudity - sets a naked outfit on the target. If PAHE is loaded,. it uses that mod's outfit.

* Slave To The Flesh - sets up an update loop that repeasts every 20 seconds, maxing out exposure, exposure rate, time rate, and it also sets gender preference to bisexual, and then locks arousal.

* Iron Will now sets Exposure Rate and Time Rate to 1

Increase Sensitivity and Carnal Obsession have a feedback loop which drains stamina, and to a lesser extent health from the caster. I've set the parameters quite low, so the spells shouldn't be life threatening, but you might want to save before testing them out.

Mandate Nudity doesn't strip the targets, it just stops them changing back into their default clothes. I might add the stripping code later, but I didn't want to think about safe unequips that respected restraints and DD stuff.

Slave To The Flesh is dead simple to cast at the moment. On the one hand, it feels a bit cheaty making this so easy. On the other hand, it's so useful I'm tempted leave it like this.

The spells are available from a spellbook in Cronvangr, still. I'll have a bit of a quest in place in the next release or two.