This mod allows you to charm nearly any NPC in the game to lure back to your house to use as bondage decorations. Also contains a furniture building and placement system for all the animations exclusive to this mod.

~~ STOP TRYING TO RUN THIS OR PORT THIS TO SPECIAL EDITION NO MATTER WHAT YOU DO IT WILL NOT WORK CORRECTLY BECAUSE ITS DEPENDENCIES DONT EVEN RUN CORRECTLY (ACTORUTIL) THERE IS A BLOODY REASON THE DM3/SE BETA IS COMPLETELY DIFFERENT AND NONE OF THE "COMPATIBILITY PATCHES" WORK ON IT. CHRIST, PEOPLE. ~~

I'll Take The Display Model II
~ Current Version: 206
~ See the Change Log at the bottom for important notes. Nothing you have to do just something I need you to know.
~ If you are just now joining us from a version 202 or older, check out the special section titled that.
~ No, this mod will not work on SSE any time soon. (SKSE, SexLab, NiOverride, FNIS) 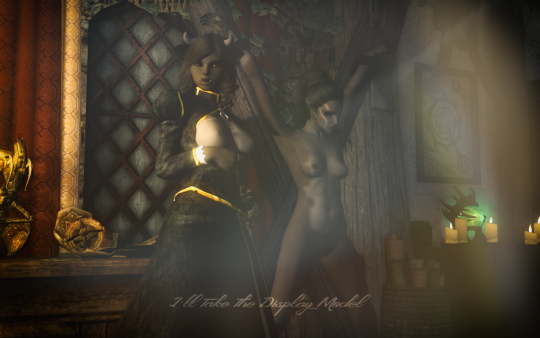 This is a 100% new codebase. ALL of the spells have been replaced with dialog. It contains all the under-the-hood advancements made during Soulgem Oven and Untamed, including persisting anonymous actors and the like.

119 Poses - 19 Exclusive Furniture
The ZaZ Animation pack is huge and awesome. Using his resources I was even able to cobble together some pose combos that did not currently exist already. There are still more that can be added, including a few I intentionally skipped because they are bugged, but Xaz seems to be on it. As of version 203 there is also furniture I made that is in no other mod.

Dialog Command
In order to engage the DM2 dialog options you need to craft an Amulet of Control for 1 leather strip and 1 ingot at any forge. You do not need to equip it, merely having it in your inventory will be good enough to allow you to use the DM2 dialog options. Afterwhich any NPC which you can engage dialog with normally (even if they didn't have dialog before) you will gain new dialog options to control them with. The only known NPCs so far that are out of bounds is the Courier and of course children. Simply leave the amulet at home when you no longer wish to have your dialog menu cluttered.

Getting an NPC under your control.
The first step is to charm an NPC to be under your control. You do this by walking up to them and saying "Come with me..." at which point they will be unable to resist your Amulet of Control and immediately begin following you anywhere you go. That will be your only dialog choice at this point. They will not fight. They will not do follower things. They will only go where you go. Once they are following you can talk with them again and many more dialog options will be available. To the opposite, telling them to go away will turn DM2 off for this actor and they will go back to whatever the crap they usually do.


NPCs as Mannequins
There is a dialog choice now which will open a bound NPCs inventory and they will wear what you give them. They are not true mannequins in that they will wear the last thing given to them - they still attempt to wear what they think is the best thing for them, so if you want them to wear something specific take away things they should not have.


Pose Mode
After engaging pose mode you will be presented with a list of pose categories. Select one, and you will begin cycling through the poses. You will know you are in pose mode because the screen will tint blue. Tapping your SHOUT key will go to the next pose, while tapping your SPRINT key will go back a pose. Long Pressing SHOUT will cancel pose mode, where Long Pressing SPRINT will re-open the menu allowing you to choose a new category. You know when you have long pressed enough because the screen will flash.

Move Mode
After engaging move mode you can tap SHOUT and the NPC will walk over to that exact spot AND angle you were standing in. You will know you are in move mode because the screen will tint blue. So the trick here is you can stand exactly where you want them, align your self straight to whatever you want their bondage aligned to, hit SHOUT and then get the fuck out of the way so they can get in that spot. Long Pressing SHOUT will cancel move mode. You know when you have long pressed enough because the screen will flash.

Self Bondage
Crafting an Amulet of Repose at the forge and equipping it will engage Pose Mode on your player character. You can unequip it if you prefer for whatever reason like if you are screenshotting yourself. To release yourself, unequip and equip the Amulet of Repose again. This feature is currently a testing preview, doing nothing more than letting you see yourself in bondage.

Placeable Furniture
As of version 203 there is some craftable furniture. Currently only the furniture I have made for DM2 are placeable due to the tricks required to make it work, meaning, none of the ZAP stuff at this time. You can craft them at the forge they are prefixed with [DM2]. They will show up in the MISC section of your inventory. To place them, attempt to equip them (just like how you attempt to equip AddItemMenu to open the menu) and close the menus. The furniture will show up where you were standing and now you have kinky home decor. You can talk to the furniture to use it (self bondage), move it with the same DM2 move mode as you move NPCs, or pick it back up. You can also command NPCs to use it. I've left sandboxing enabled so there is a chance a follower could accidentally get themselves stuck on it! You can talk to them to release them... if you want.

INTERESTING NOTE ABOUT PLACEABLE FURNITURE - because of the way the game handles occlusion planes, if you place something in one room, then move it to another, it is possible that the object will be invisible in that new room, unless you are standing in the old room looking into the new room. It's weird, I know. If you intend to move the device more than a few meters or to a different room, I highly suggest you pick it up and redrop it in the new room rather than use the move mode.


If you do not want to lose your decorations then install DM2 and run it at the same time as DM1. Go in, release a decoration (cast "Release Will" on them until they start walking away), then charm them back via DM2 dialog. If you do not do this they will likely all walk away before you can get home. Once you have converted all your decorations save, uninstall DM1.

Updating DM2 from 202 OR OLDER


I identified an issue with the Bethesda function PathToReference which could cause it to get stuck. If you had ever told an NPC to move, and then they stopped half way and nothing ever happened, probably after yelling at you, then you have been a victim of this problem. Even if you have not noticed this happen, you need to check your save because the glitch will prevent the scripts from updating properly. It is easy, I promise.

1. Get SaveTool.
2. Open your save with it. The .ESS file.
3. Type dcc_dm_ into the filter box in the top left.
4. Expand the ACTIVE SCRIPTS section. 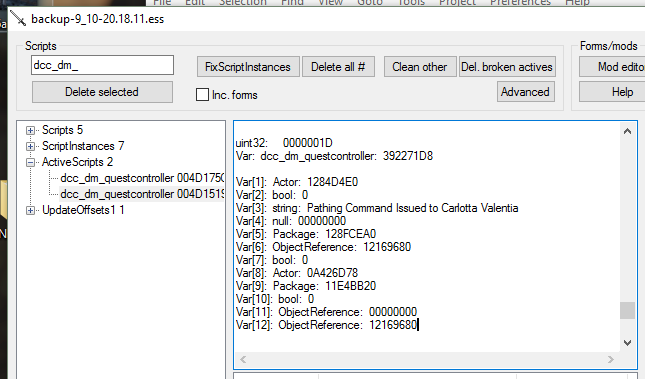 If you have no DCC_DM_QUESTCONTROLLER under ACTIVE SCRIPTS then grats you are done. Go install the latest update and play. 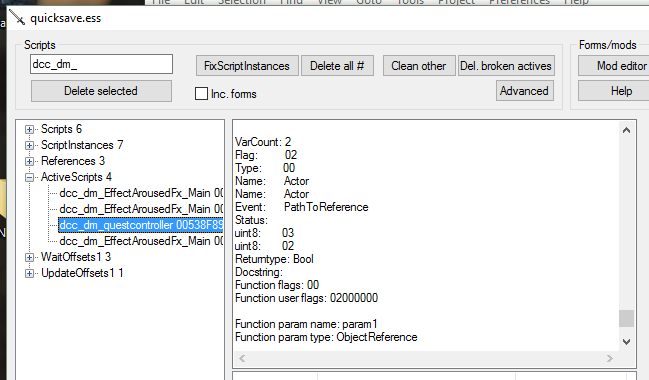 
The source code is released under the MIT licence with the following provisions: