*** 27.Jun.2021:  *** new version V3.1 the ZaZ-Peeing items will now be removed after the pee/squirt animation so they will not spam your inventory (thanks to AtomicPlayboy for the hint!) ***

This mod runs with Oldrim, LE and SE

What does this mod do?

So, have a look to the demo videos below and decide if this mod is for you...

- Females peeing or suqirting when they reached a given arousal level (see video #12, this is part of the "non combat arousal" Function)

- you can optional activate some "dirty talk" messages on death/kill, the non combat arousal function and the Dancing Penis spell (see video #15)

- If your schlongs do not move after installation check if you have enabled SOS in the SexLab Aroused mod.

- Of course the NPC settings work also for all creatures if you have "sexlab aroused creatures" in place.

- If you want the "Masochist" function you also have to activate the "Getting limp being hit" toggle.

- Use the "Geting limp again if already hard" function of the "On Hit" section to prevent the characters to always being full hard.

- Hit a dead NPC or creature and see what happen.

- If you use the mod "Aroused Sexy Idles" and you have set the idles activ for your player and you have activated the Dancing Penis Function "Non Combat Arousal on Player" and you have switched to the free camera view "TFC" you will get this issue: The free camera will switch back to the 1. person view every time the Dancing Penic mod is updating the arousal level and the idles mod will start or stop an animation. Up to now i do not know how to fix this issue (if possible). You can switch off the "Sexy idles" animation for your player to avoid this error (so, idles only active for NPC).

- Animal SoS (optional if you want Dancing Penis for all creatures)

*for Oldrim and LE please use the "non SSE" versions

- Animal SoS A great mod that worked together with my mod and my "Dancing Penis" spell, see the horse videos below

- SurverX floppy CBPC settings have a look to my floppy SoS settings, that maks the dicks really dancing ?

For this mod you need SoS and Sexlab already in place... so i think you also have a mod manager already in place. Use the mod manager for installation and de-installation. I really like the MMO2 mod manager. The load order of the mod does not matter at all and you do not need any FNIS runs because the mod is only script based and does not overwrites any files. Enable SOS in the SexLab Aroused mod (otherwise the schlongs will not move at all).

Simply remove the old version and install the new one with your mod manager and you are fine.

... to all the great modders that laid the foundation to make this possible!

Getting hard on Hit NPC: The NPC should get harder with every hit. Default is On,

On Hit value for NPC: The amount of arousal for each hit, default is 25.

Getting limp again if already hard NPC: If the NPC reached a certain amount of arousal (0-100) he will get limp again. This feature prevents the NPCs to always being hard ? Default is Off.

Getting limp being hit NPC: NPC should get limp with each hit he receives, default is On.

Value for getting limp on being hit: The amount of arousal the NPC loses with every, default is -30

When to get limp if already hard: This is the value when the NPC will get limp again if he is already hard. The value could be between 0 and 100, default is 95

On Death or Kill

This are the stages for death/kill event:

You can select one of them, all of them or none. Between these stages there are a waiting loop (number of seconds to wait). PC and NPCs can be configured seperately (the waiting loops are for both of them).

Full hard on Kill: PC or NPC should get hard after killing someone, default is On.

Waiting before orgasm: Amount of seconds to wait before the next stage (start orgasm/peeing), default is 2

Waiting before getting full limp: Amount of seconds to wait before the next stage (getting full limp), default is 15. This waiting parameter also defines how long the character should pee.

Full limp on Kill: PC or NPC should get fulllimp after killing someone, default is Off.

Here you define the spell effect on the NPCs and creatures.

The effect on spell is a loop and is executed in the follwing order:

Here you define the "non combat arousal" function. You can define two areas around your PC (close area and wide area). If a NPC or a creature enters the area the "non combat arousal function" for the given area starts. If the NPC leaves the area the effect stops. The close area has the priotity over the wide area. You can activate both areas, none or only one area. The procedure is:

Scan intervals in seconds: Here you define the amount of seconds the system will wait before doing the next non combat arousal execution. Be carefull with this setting, if you set it too small and if you have defined huge areas the system could lose performance. Default is 3 (this is already quite a small value!)

Activate non Combat Arousal on Player: A Toggle to activate or deactivate the "non Combat Arousal" for the (female) Player. If activated the player gets the same arousal cycle as a NPC that entered the wide arousal area (hard, limp, hard, ...). This function might be handy for testing (e.G. the "Grower Extended" mod) or if you just love to see your PC's shlong moving ?

Characters start pee/squirt when aroused: If the female characters reached a given arousal level they start peeing. This works also with your PC if the "Activate non Combat on Player" toggel is active. Default is Off.

Here you define some general configurations for the whole mod.

Delta before the next hit will be executed: This mod can produce some serious load on the system. That is why i introduced this configuration. If too many events are generated by the system (e.g. On hit events if a spell is involved) this configuration will skip all the events that comes too fast. A small value like 1 or 3 means the system will execute a lot of events. A large value like 8 or 10 means that the system will skip events and will only execute some of them. So if you have the feeling that too many events are generated and the system starts buffering, increase this value. If you activate the debug messages you will see this message if the system skips an event: "OnHit, too many hits... OUT", this is not an error message but a sign that the system skips some events that came too fast to execute. Default is 3.

Pee/Squirt mode: Here you choose which animation you want for the pee/squirt function. There are 4 different animation from the zaZ package:

Dirty talk when NPS enters your wide area: If a NPC enterts your wide area that you have defined for the non combat arousal function you will see a message. This could be quite a lot of messages, therefore the default is off. ?

My personal settings for this mod:

Here are my personal settings that i run with my mod.

Short story: I switch everything on ? 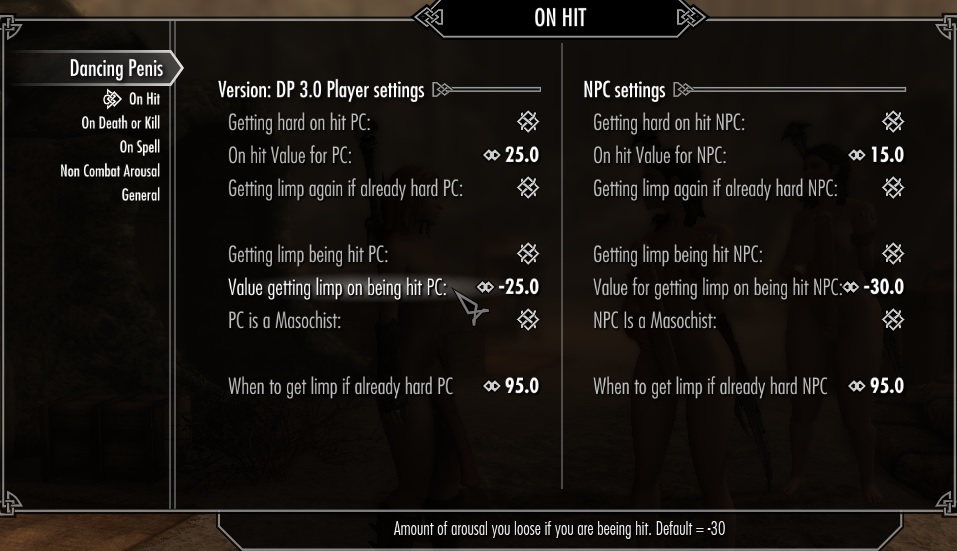 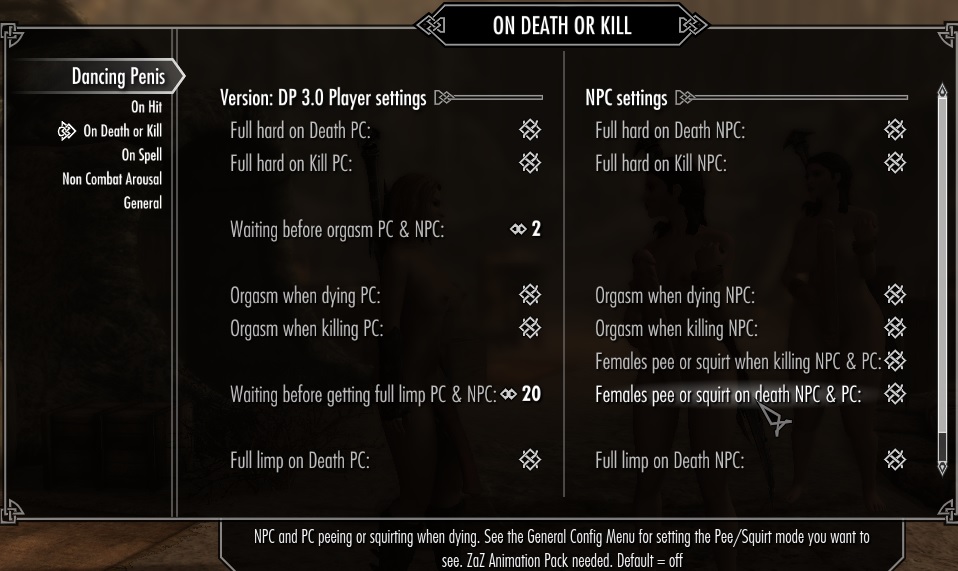 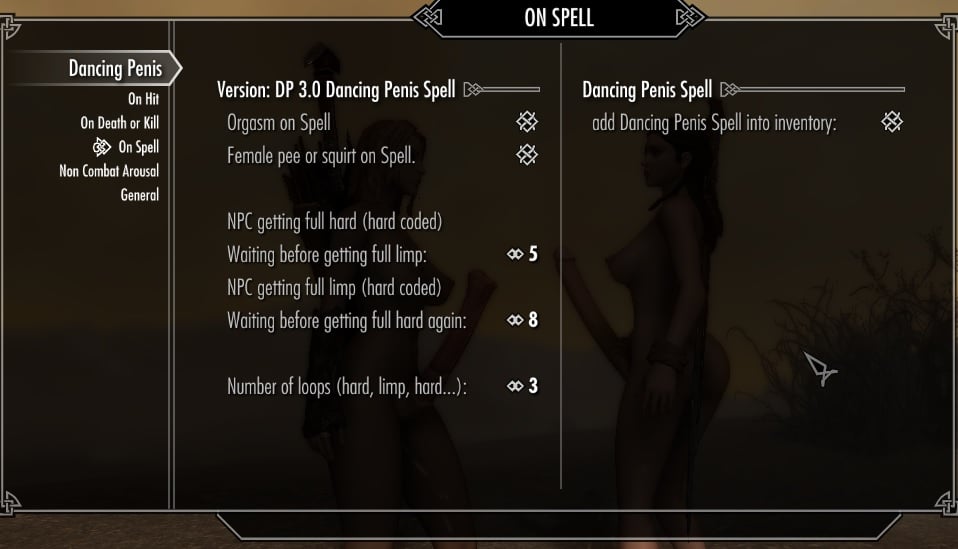 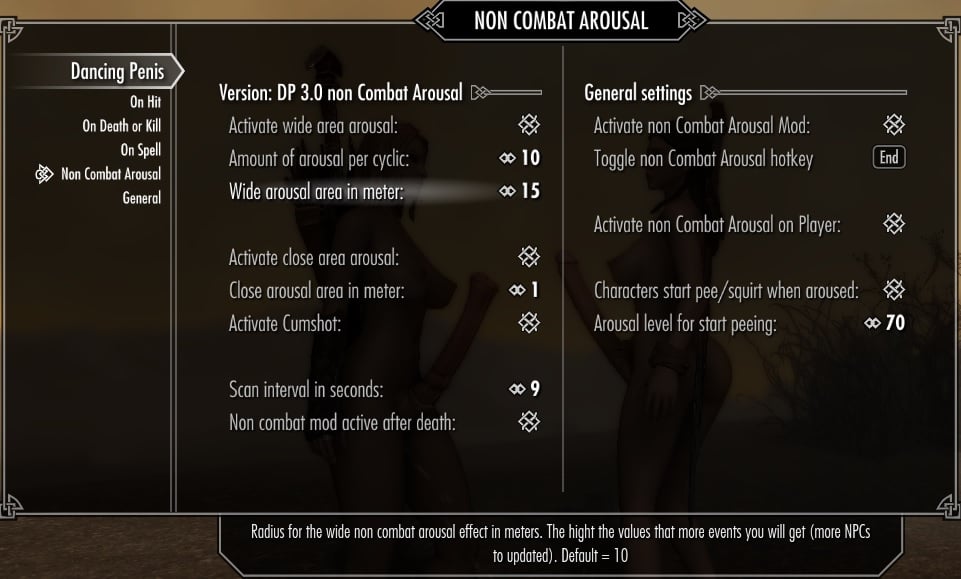 I only use "dirty talk" messages for death and for the non combat arousal. 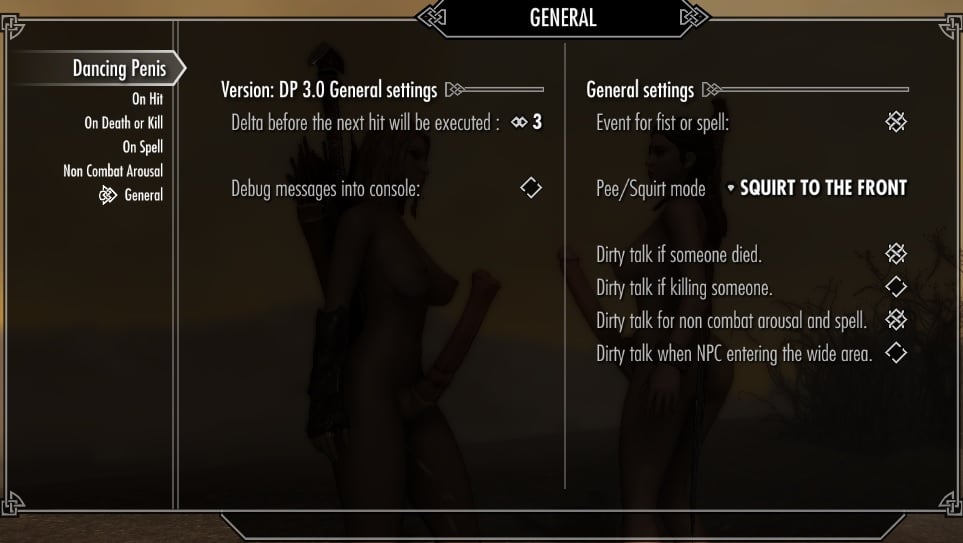 #3 getting hard when hit or being hit...

#6 the "non combat arousal" function... the function can also be active after death of the NPC...

#10 The "non Combat Arousal" function on the PC, one follower and a dead giant...

Also have a look to my CBPC floppy settings that make the cocks really dancing ?

New in Version 3.1:
- the ZaZ-Peeing items will now be removed after the animation, so thea will not spam your inventory (Thanks to AtomicPlayboy for the hint!)
- I set all "dirty talk" options initial to false. So maybe you have to activate them again...