After her and Lydia had redressed, Monilee asked her if she was alright.

"That was amazing," the warrior answered. 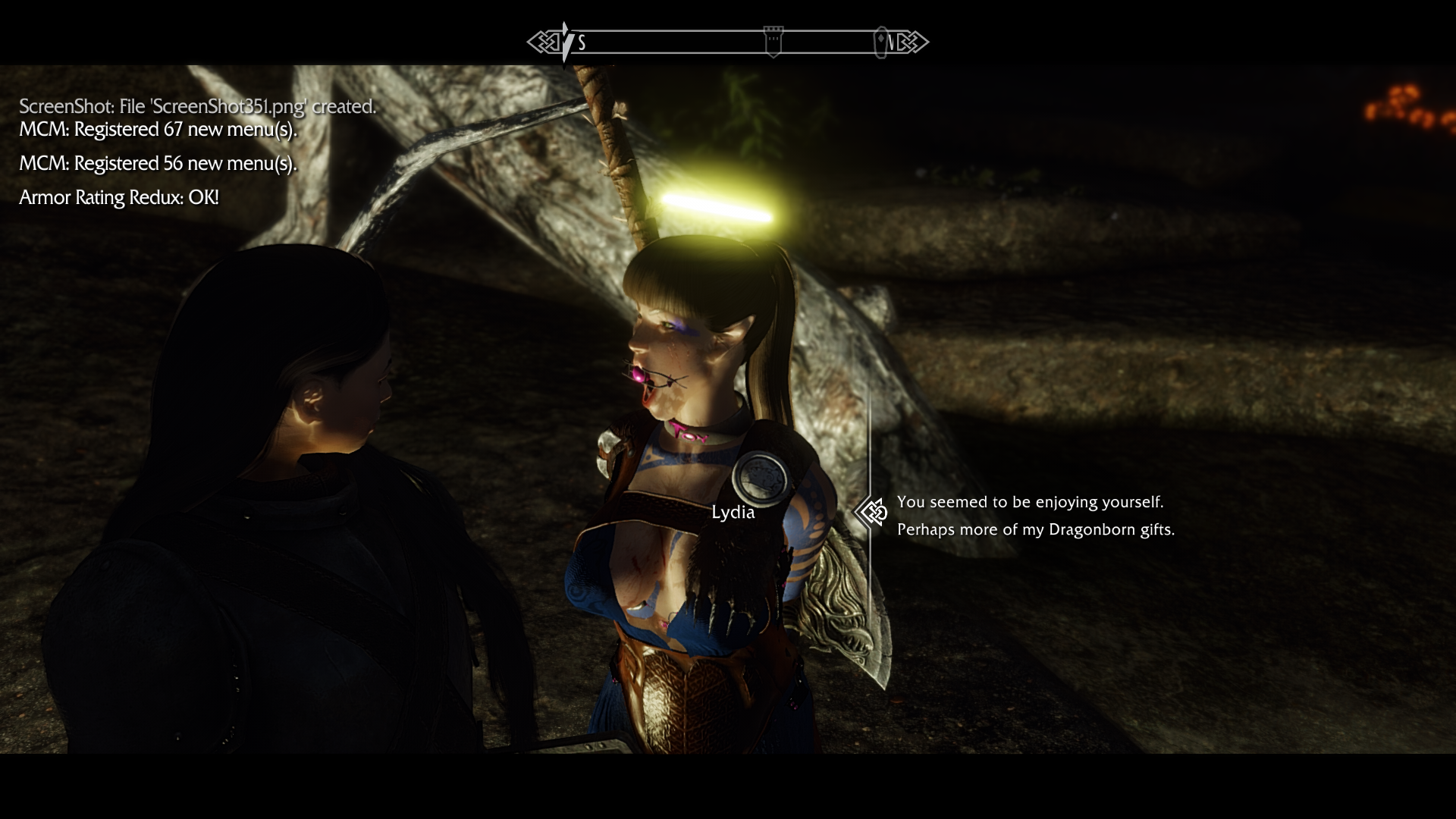 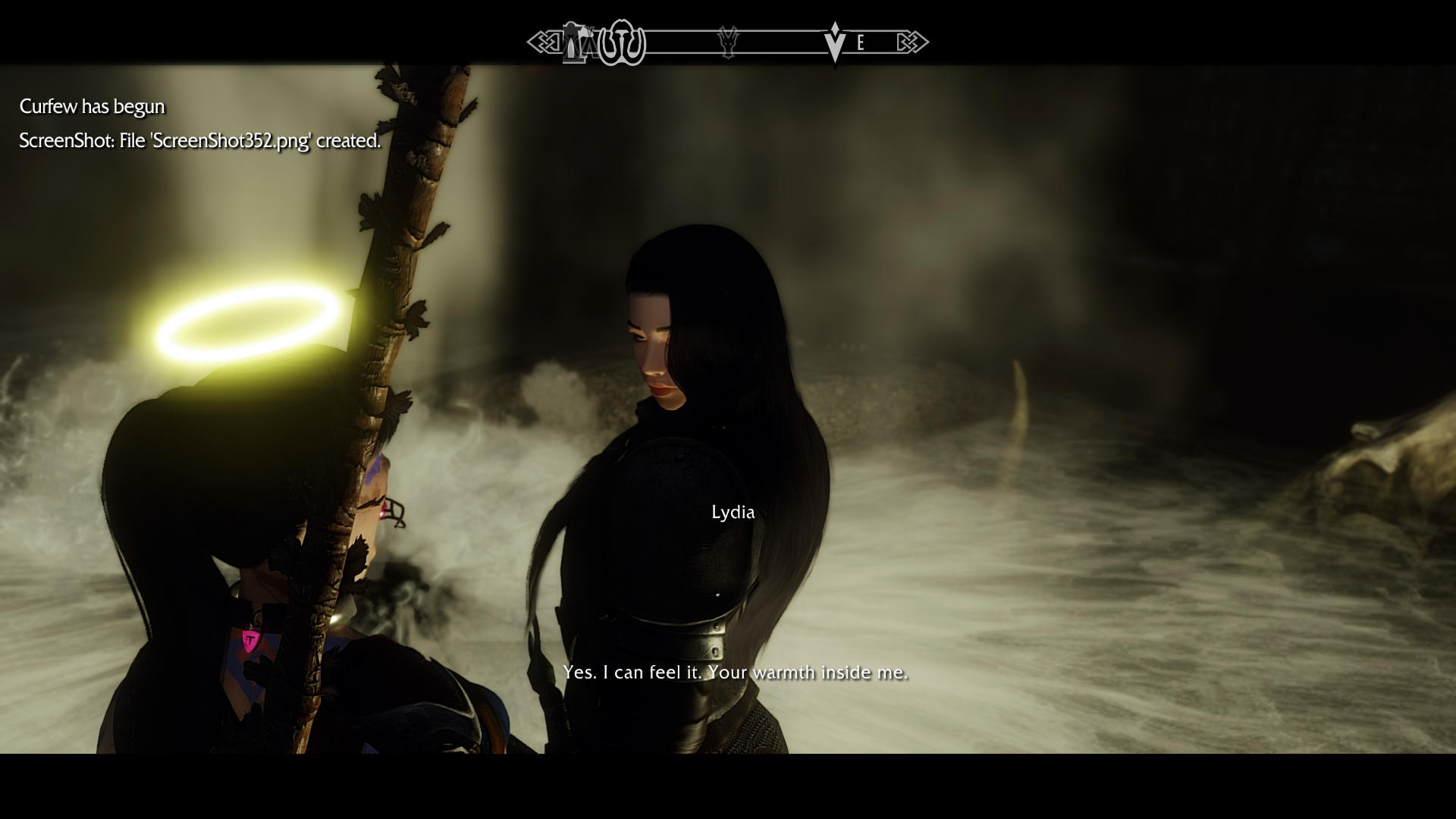 "I cannot deny it," she continued. "You're a lover like none other."

They talked for a time longer on the road back to Whiterun. Lydia shared her misgivings, her concerns that Balgruuf might have failed to live up to his promise to see that she was valued and cared for. They talked about her dreams for the future, and her commitment to live with honor in the present. And they both agreed that this would not be their last time finding pleasure in one another's' arms.

By the time they reached Whiterun, the rain had stopped and the clouds had vanished. The sky had an almost blue glow under the moonlight, and the whole party was exhausted by the time they entered the Bannered Mare. For the first time, Lydia didn't set herself on guard outside the bedchamber. Though she made it clear this was a singular aberration, she lay close to Monilee in bed that night, sharing their warmth against the cool night breeze.

To her embarrassment, as Monilee slowly roused from her sleep she realized she had not been dreaming of Lydia but of men - men of all shapes and sizes - men who were strangers to her. As the vision faded from her mind, she heard a familiar whisper. Soon, my daugher, Dibella's voice promised, soon you will be free. Defy Nocturnal just a little longer, and you will be free. 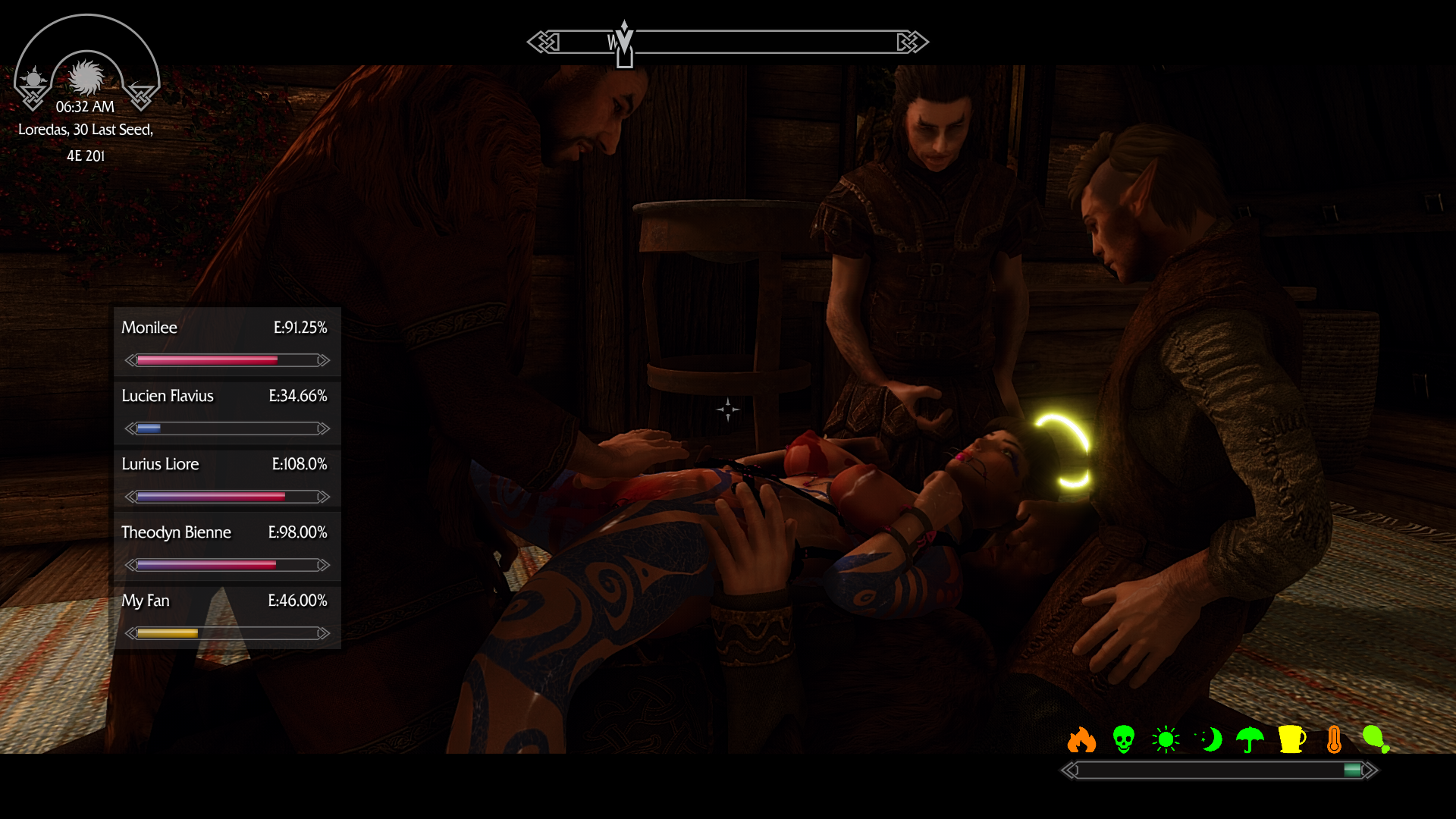 Over breakfast, she discussed their next steps. First, they'd deliver the metals to Adrianne and collect Lydia's new armor. Then, they'd head for Riverwood to speak with whoever had purloined the horn. They wouldn't be returning to Haemar's Shame. Shayna seemed a little disappointed, but everyone acknowledge that validity of Dibella's message. Now wasn't the time to blithely accept Nocturnal's commands.

As they approached the smithy, however, a voice called out to Monilee.

"Dragonborn, I have important news for you!"

Turning, she found herself facing one of the Knights of the Lily. She didn't recognize him behind his faceplate, but she understood that this must be related to Dibella's plan. 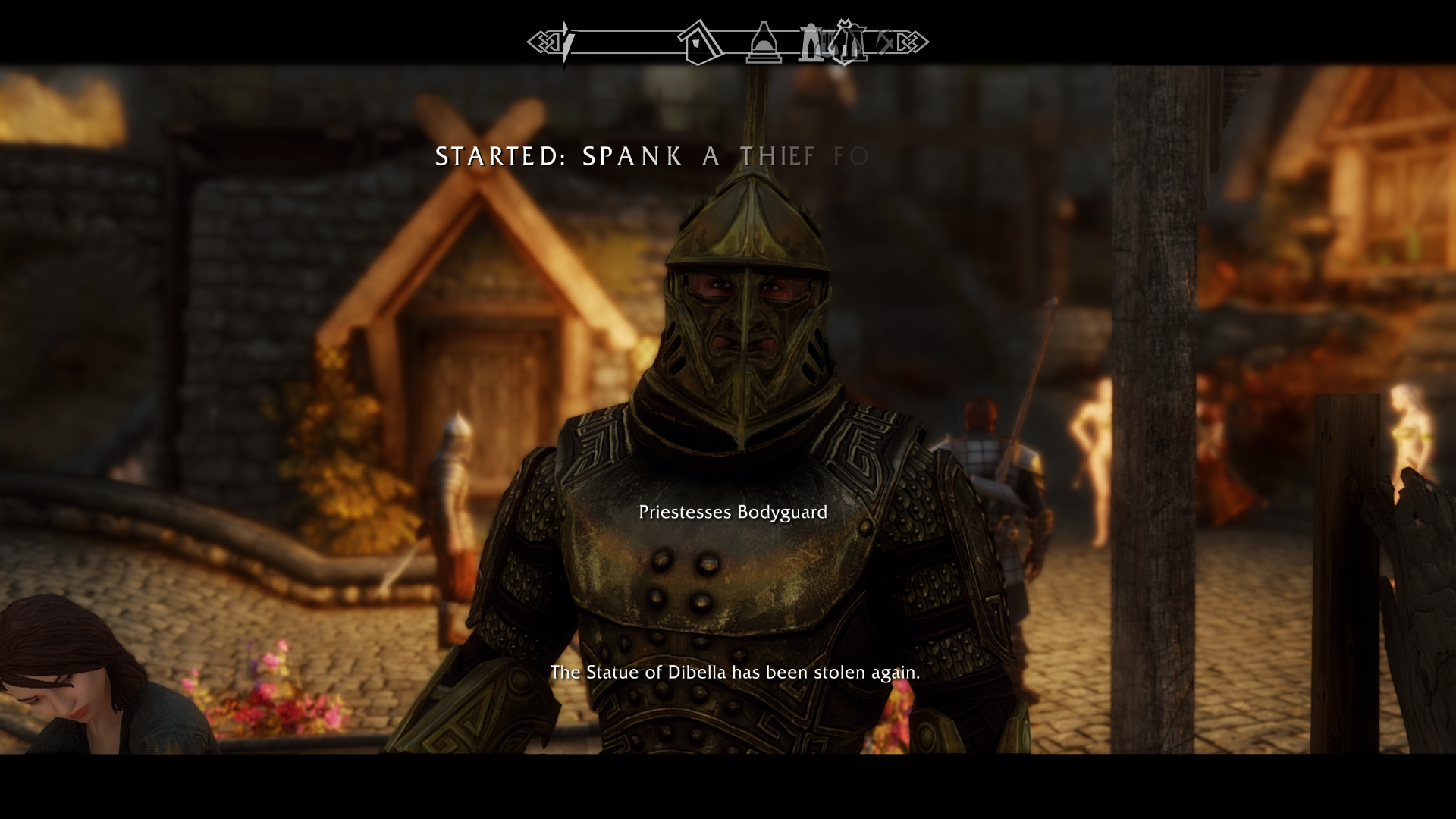 The Statue of Dibella, he explained, had been stolen again. He urged Monilee to return to the temple with haste and speak to Elizabella, to which she agreed promptly. After I've retrieved the horn, she clarified to herself.

Not long after, Monilee saw Adrianne emerge from her house and start preparing for the day's work. They chatted briefly, before Monilee handed over the crate of ore. 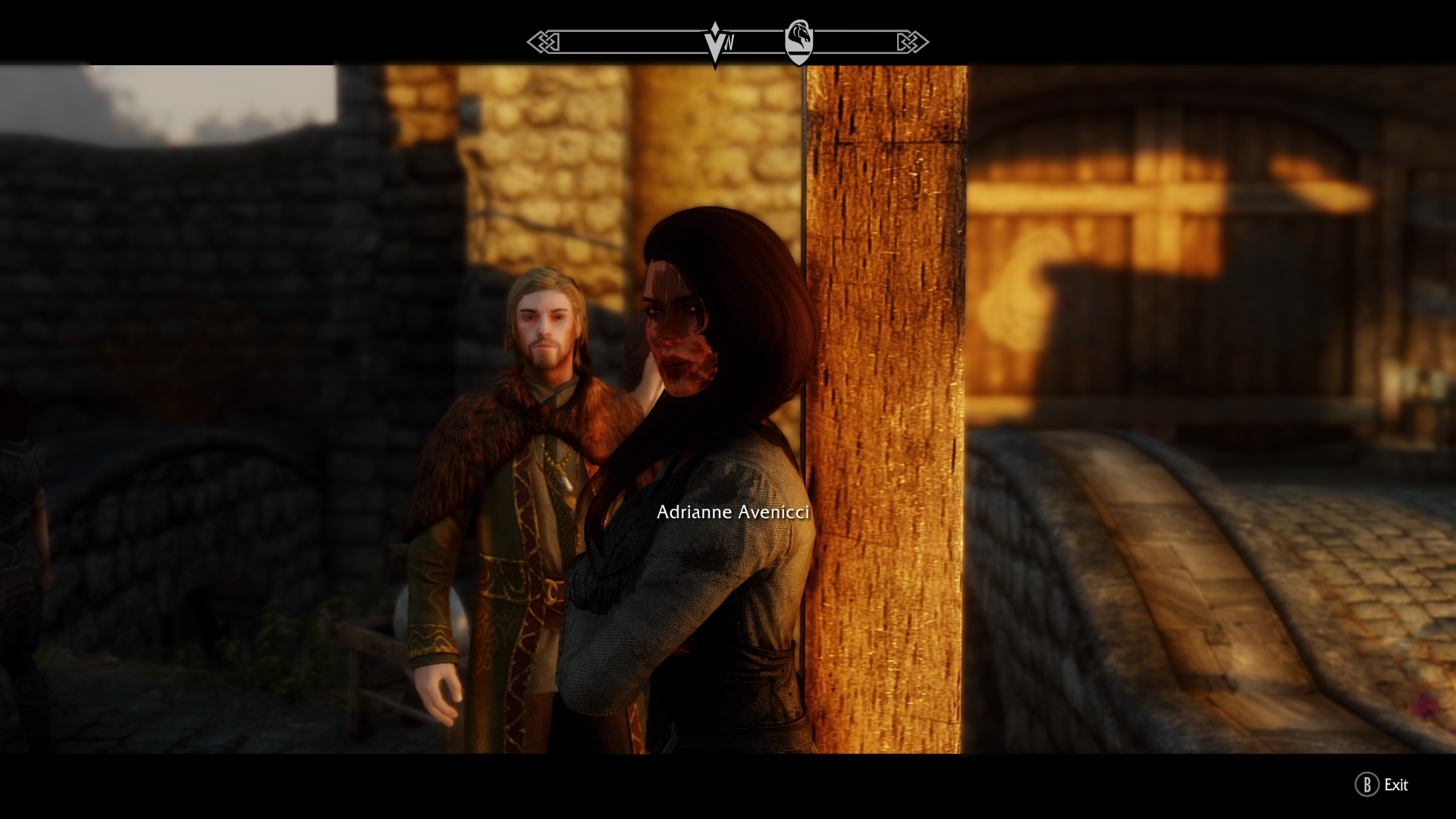 "Now that I have this, I should set about armoring your Housecarl."

They chatted while Adrianna worked on the armor. "You know," Lydia said, "before we leave you should talk to Adrianne's father about that house in the cloud district. No sense in you - the Dragonborn - sleeping in the tavern every time you come here."

Monilee digested that for a moment, then nodded intently. "You're right," she said, "it's past due that we get a proper home base. Let's attend to that while she finishes up with your armor."

When they approached the upper tier of Dragonsreach, Jarl Balgruuf was not free to speak, being deep in conversation with his advisors. Adrianne's father, Proventus Avenicci, had no such constraint on him, and he was happy to talk real estate with Monilee. After some haggling, they settled on a price of five thousand septims for the house that Lydia had recommended. 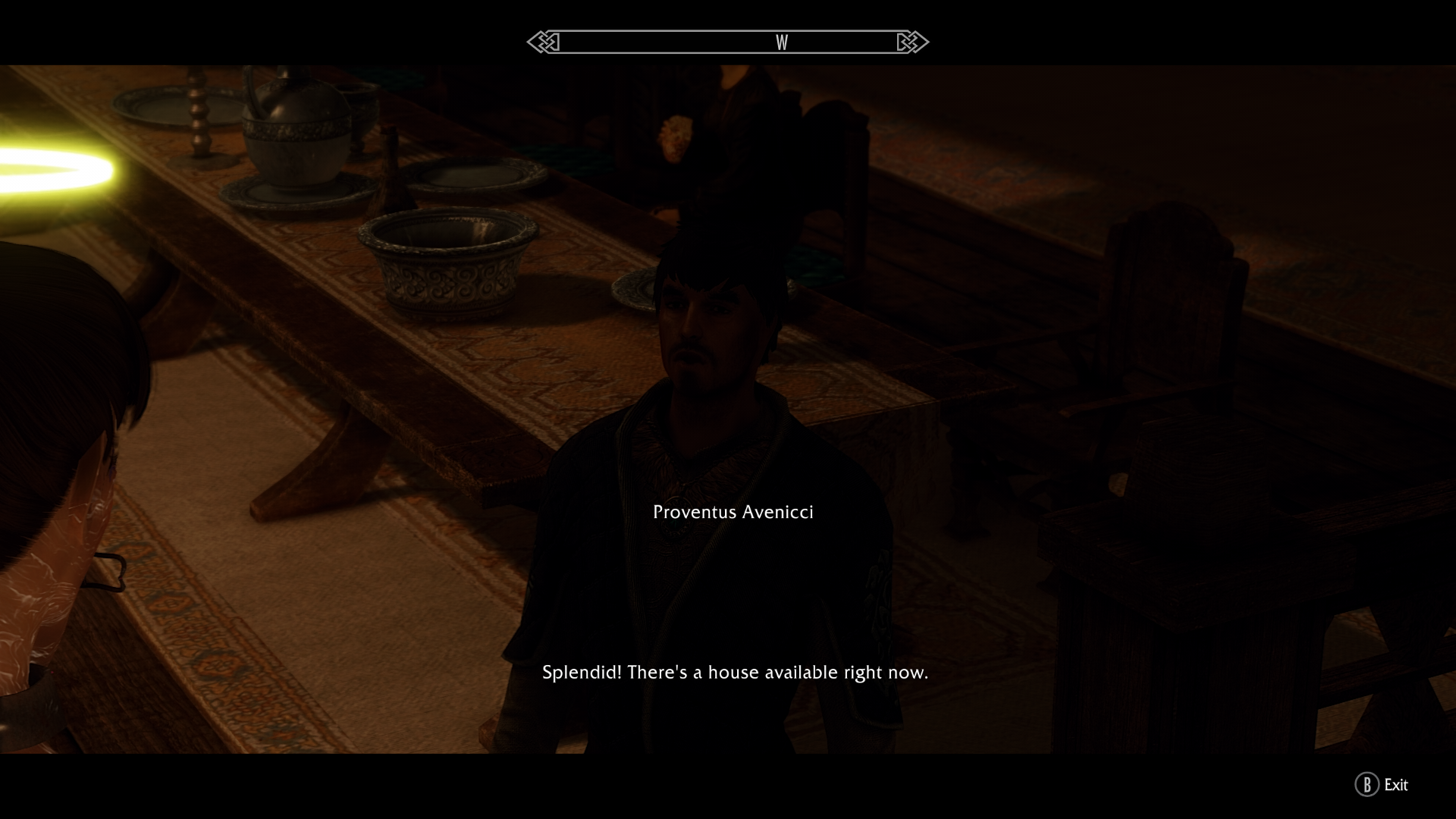 And like that, coins were exchanged for keys. Returning from the longhouse, they took a path that past Monilee's new home, and she found that someone had thoughtfully decorated its porch for Tales and Tallow. She considered unlocking it, but feared that once she did she'd spend the whole day settling in. Better to save that for their return from Riverwood, ideally with the Horn in hand. 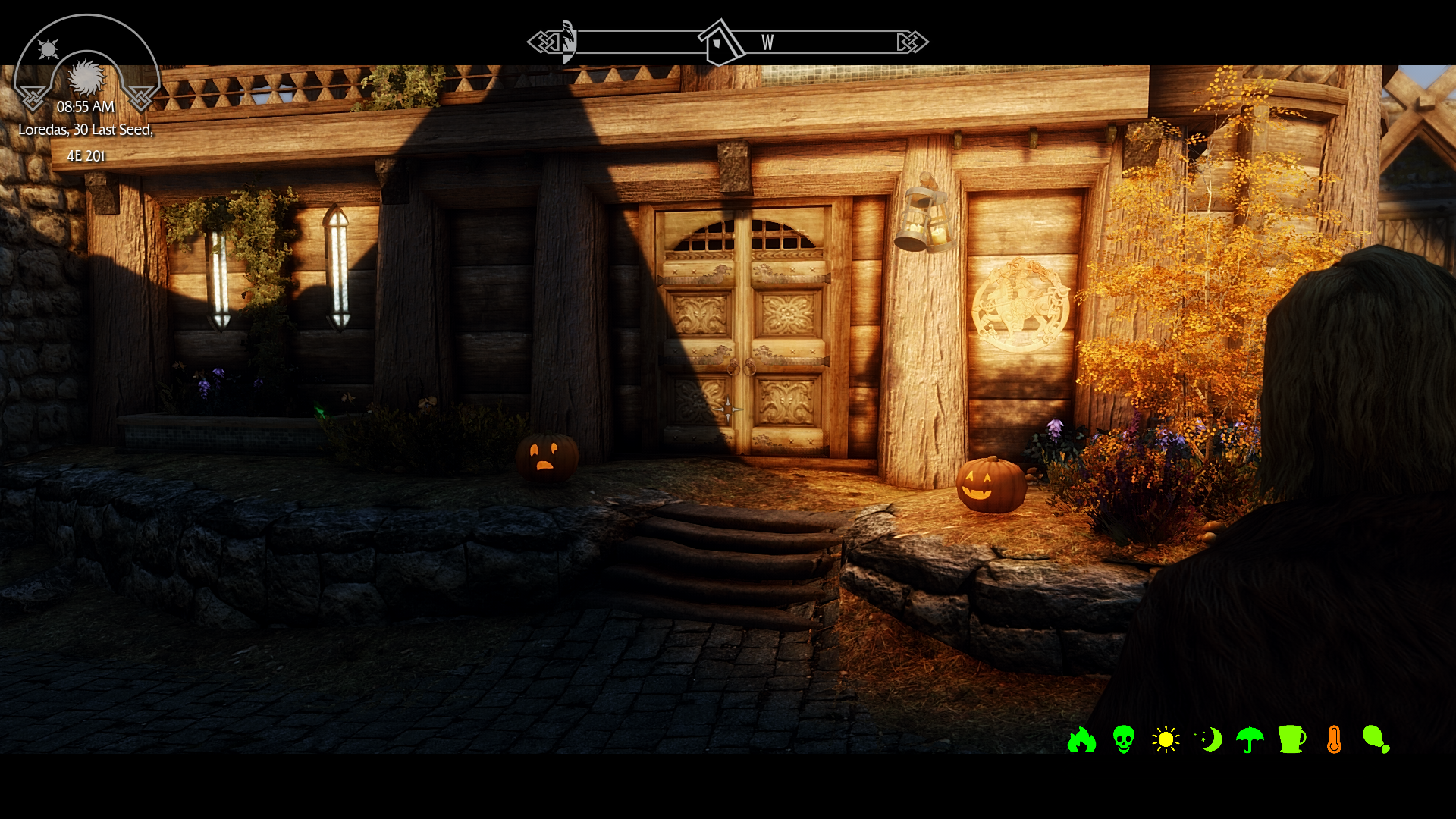 That trip to Riverwood wasn't meant to be. While Lydia tried on her new armor - a fine suit made in an eastern style - a familiar man approached Monilee.

"Sir Biggs," she said, "what brings you to Whiterun?"

"You bring me, Dragonborn."

"Are you coming to tell me about the stolen statue? Earlier this morning I spoke with one of your fellows."

"No, but that beckons as well. Dragonborn, I have good news. We have solved the problem with the ritual. We can free you from Nocturnal at last!"

"At last," she said, "Dibella told me that I would have my freedom soon, but I did not expect it to come so fast. I take it your cart is ready?"

"Here in the town square."

"Then let us proceed to Markarth."

Biggs shook his head, "No, Dragonborn, we are no longer forced to stay close to the temple. We can carry out the ritual right here in Whiterun." 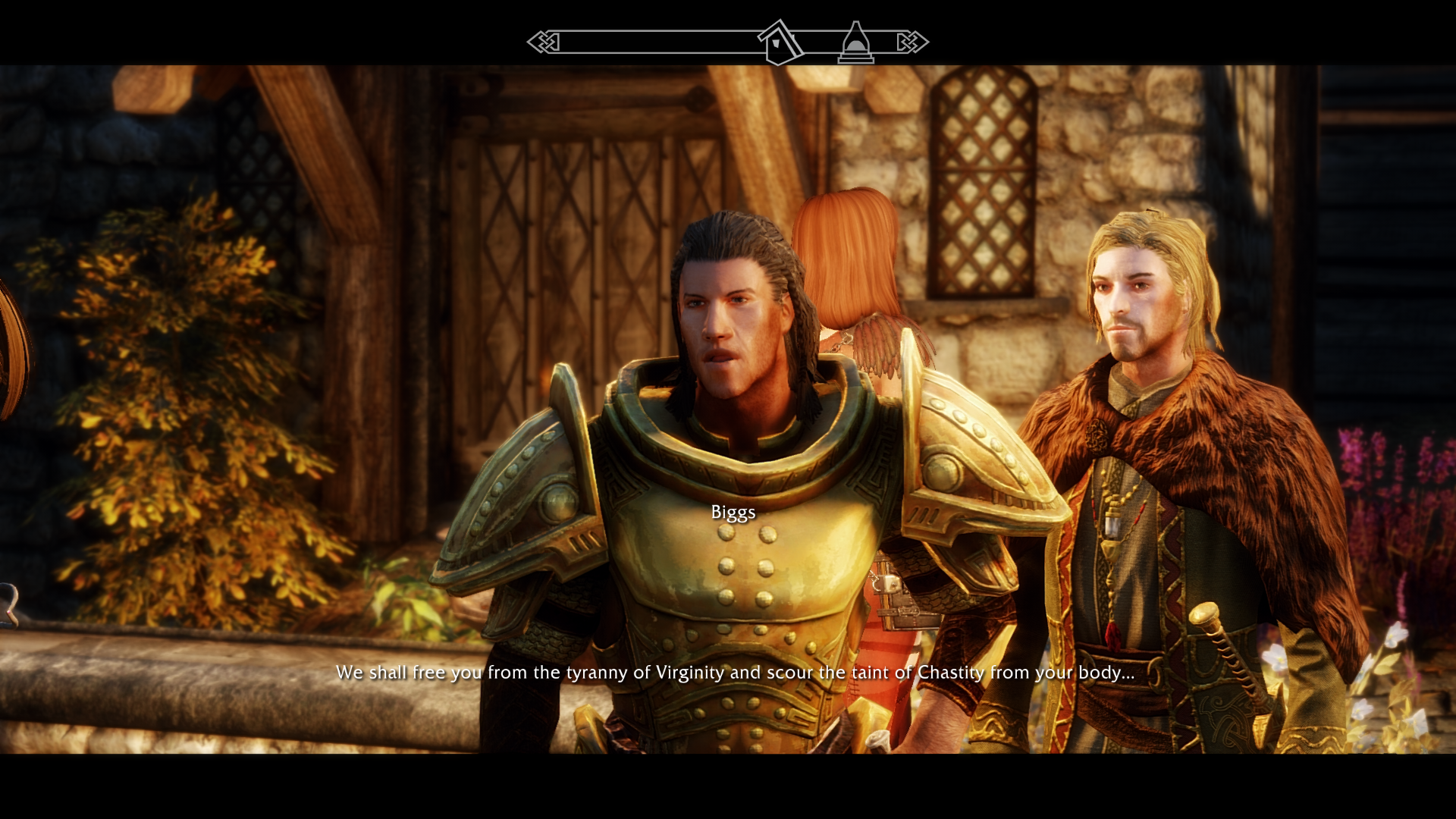 The ritual began much as it did in Markarth, though perhaps with some closer attention from the city guard, including one who 'helpfully' slapped Monilee hard across the breasts as her shackles were being tightened. 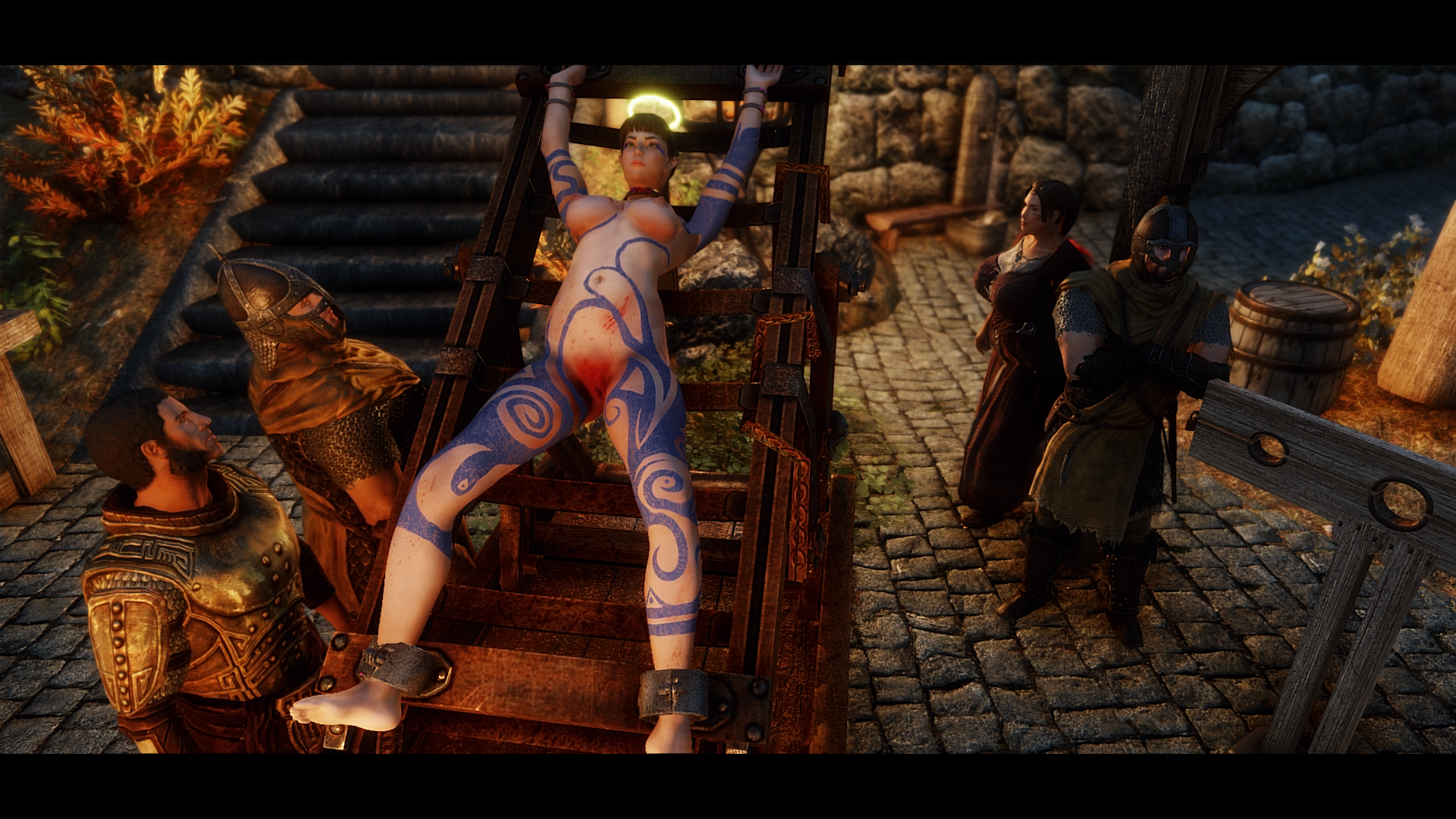 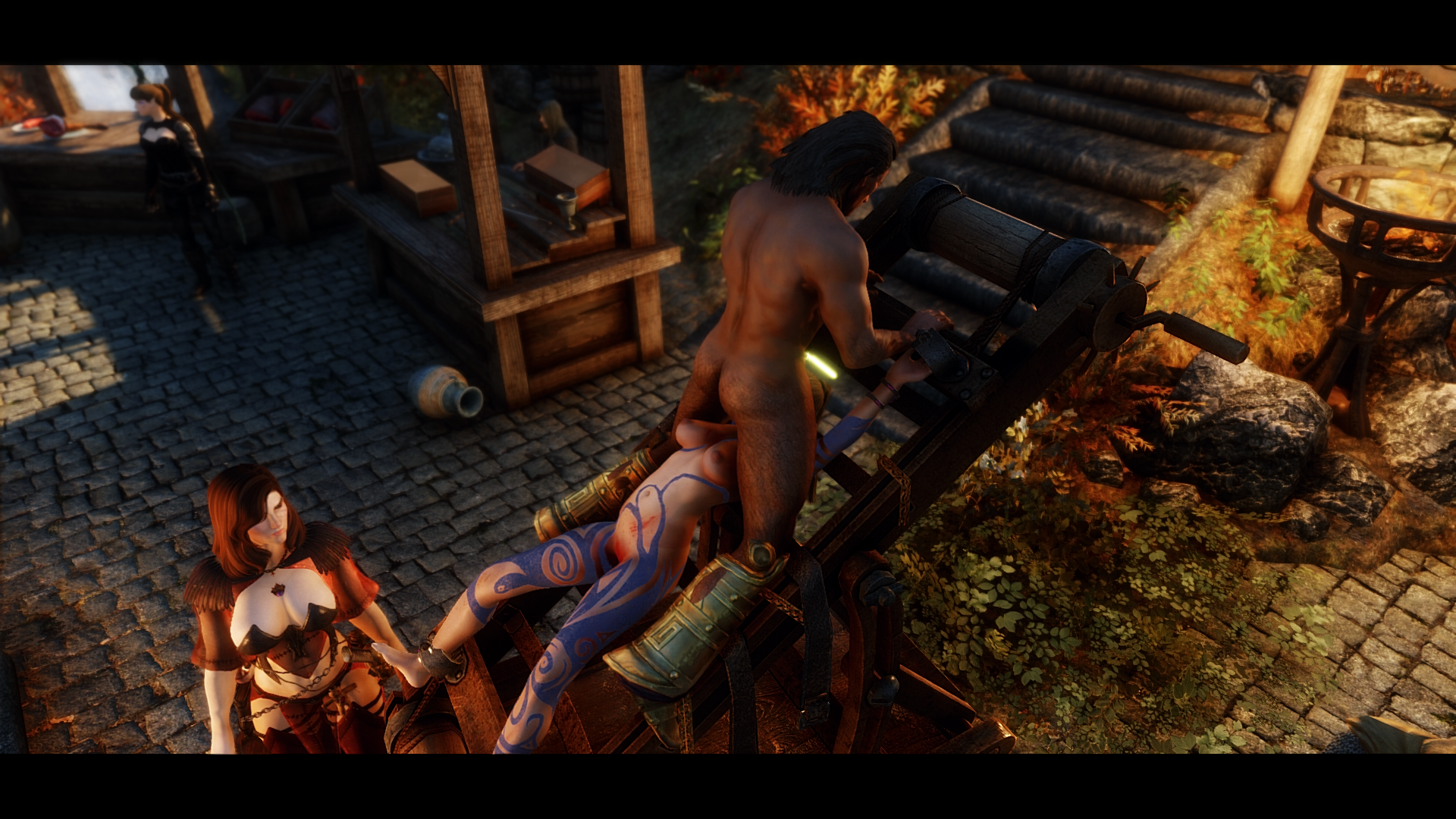 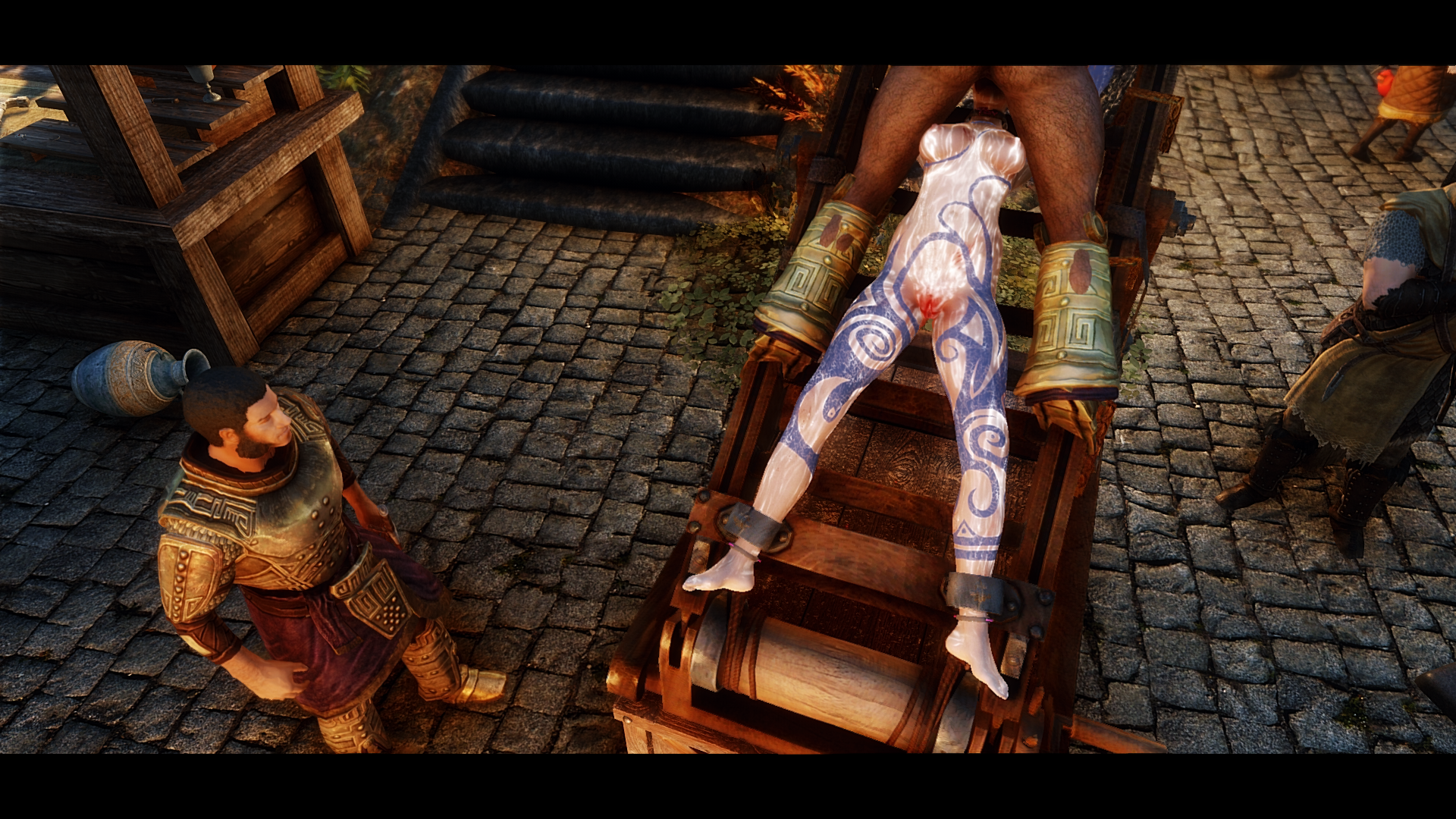 Unlike last time, however, Nocturnal's toys did not return and her virginal blood flowed freely. At last, Monilee thought, I've slipped Nocturnal's leash.

When at last her breath returned to her, Monilee turned to Lydia and Shayna. "OK, change of plans. I need a drink, and a long, long nap. Let's see about this house after all."

'A drink' turned into 'a drink, a haircut, and a shopping trip,' but at last Monilee unlocked her new home and led the party inside. The ground floor had a nicely equipped kitchen, some comfortable guest rooms, and a pair of finely made wooden mannequins that Monilee made a mental note to decorate with loot from their adventures. Upstairs they found a master bedroom that practically begged Monilee to immediately take a long nap to recover from the day's events. 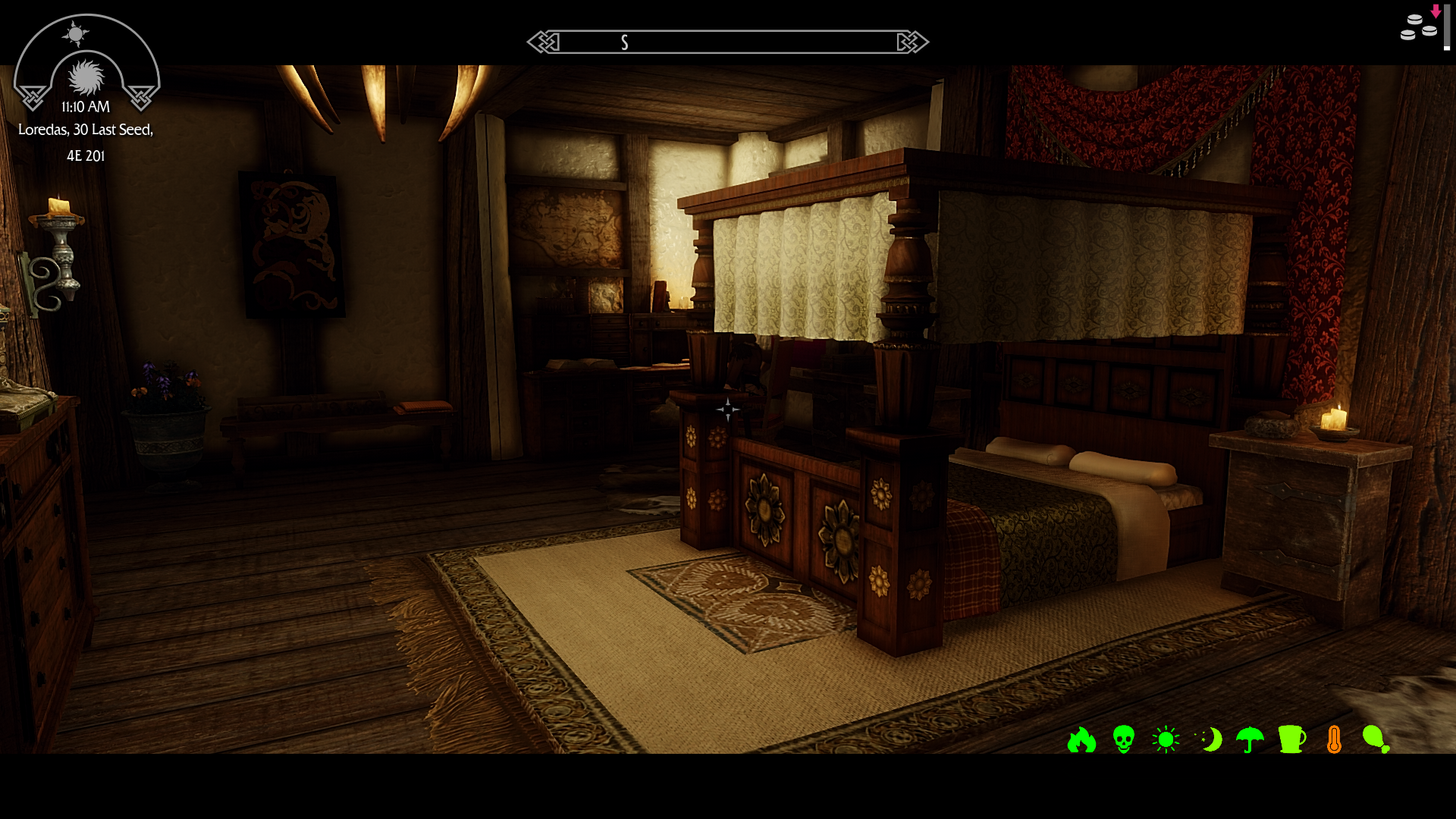 Take that, Nocturnal, Monilee thought, I'm free of you at last.

Perhaps more to her surprise than it should have been, Nocturnal whispered back. Enjoy your freedom while it lasts, Dragonborn. Rebirth awaits you, and there is no escaping your destiny.

Looped back to test the Thu'um of Love issues in greater detail. For reasons that are so far unknown, the second word ("Luv yu") was consistently not triggering its sexlab animation component. However, the first word activated correctly; additionally, once the first word had been used at least once, then the second word worked as well. Testing is ongoing to try and identify other factors that might be contributing to this - confirmed as unexpected behavior by @VirginMarie.

Spank a Thief second round triggered as expected.

Successfully completed the deflowering ritual. It's worth noting that the ritual did not permanently unequip the scanty harness, so I was not be able to equip the Dibella harness immediately after completing the event. 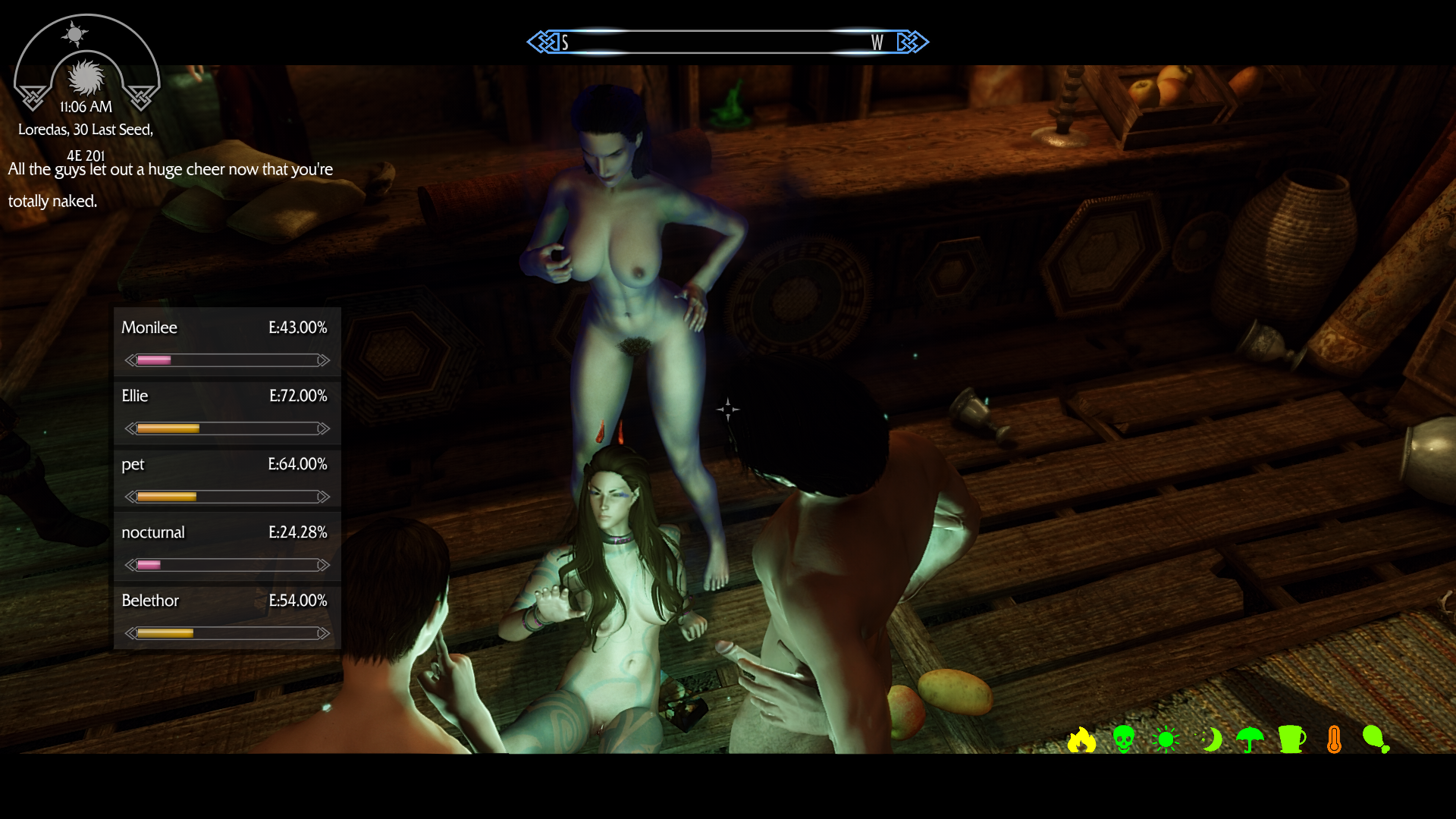