"Approach, my child, and choose how your new life shall begin..."

Monywyr felt a presence behind him. Just moments ago, he was sure he was alone in the cell. Now... he was not so certain. Dim memories flitted through his mind, of another life, and of a dream of pine and lavender. He knew that when he turned, he would once again face the idol of Mara. 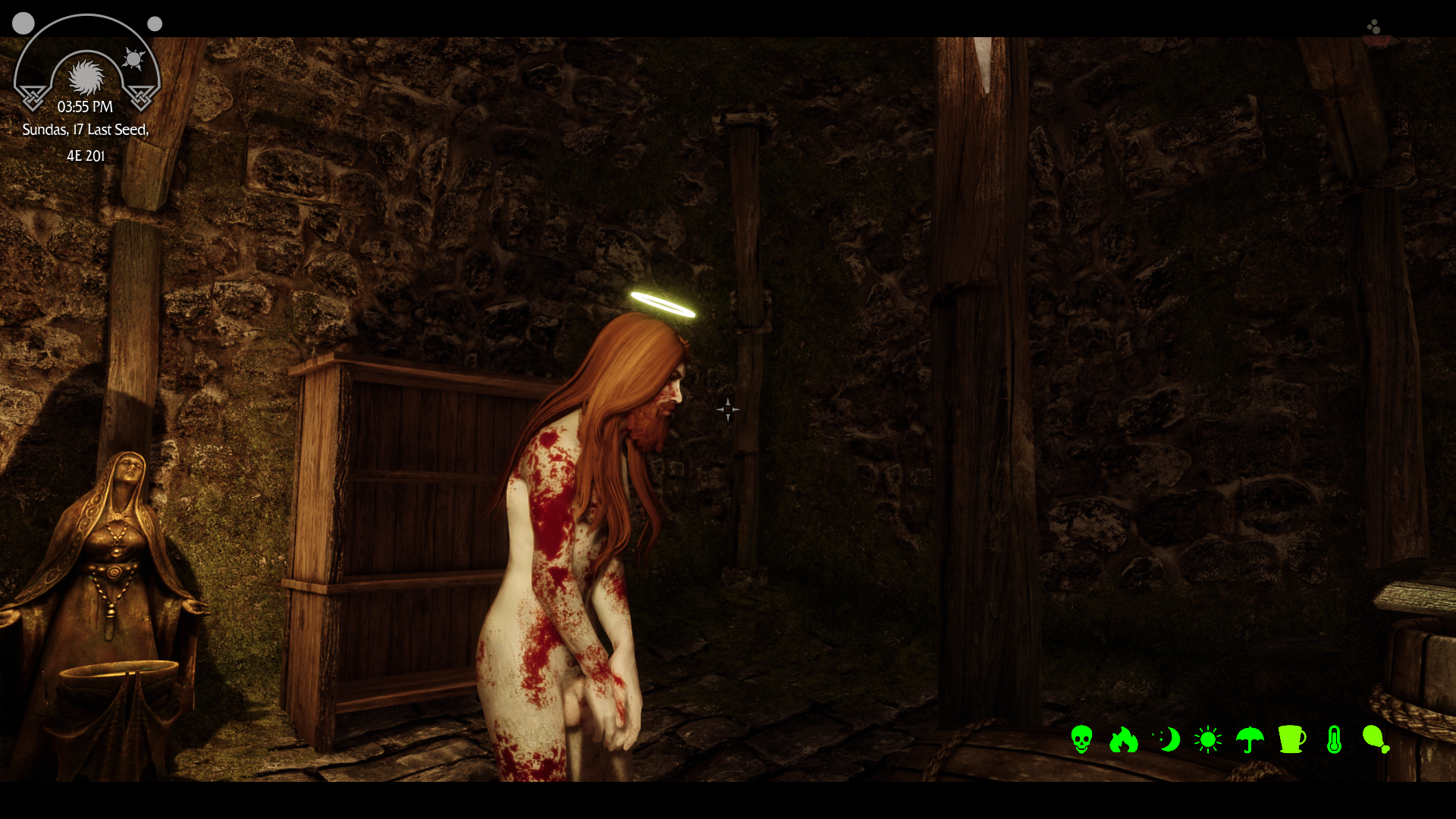 Monywyr considered delay. The transformation Nocturnal had subjected to had been anything but painless, and his whole body ached. Still, he knew there was nothing to be gained by denying the goddess. With a deep breath, Monywyr squared he shoulders and turned to face the statue.

A third time she challenged him. "Approach, my child," she repeated, "and choose how your new life shall begin."

Monywyr remembered the dream, and he almost aped his words from before. I was left for dead he had confessed, truly then. But he knew where that road led: to Solitude and the kennel, and then a long quest for an ancient birthright - and into Nocturnal's grasp.

So he considered. In the final confrontation, Nocturnal had bent Monilee's will effortlessly with her dark power. Monywyr thought about the long neglected letter he had received - an invitation to Winterhold for mysterious purpose. Winterhold, seat of magical learning in Skyrim. Monilee had never been very interested in magic, but she had always understood she had a degree of innate power. The revelation of her Dragonborn blood only cemented that knowledge. Monywyr realized, this was arrow left unused in Monilee's quiver. Monywyr wouldn't make the same mistake. And he understood the power of the choice that lay before him - he wasn't sure how he knew this, but he was certain that whatever story he wove for Mother Mara, she would work into the tapestry of reality.

I am a new member of a guild, he imagined, a student at the College of Winterhold.

Monywyr opened his mouth, but before he could speak a different voice interrupted. Nocturnal.

"Oh, you are so clever Monywyr. Clever, but foolish. Mother Mild! Surprise this fool." 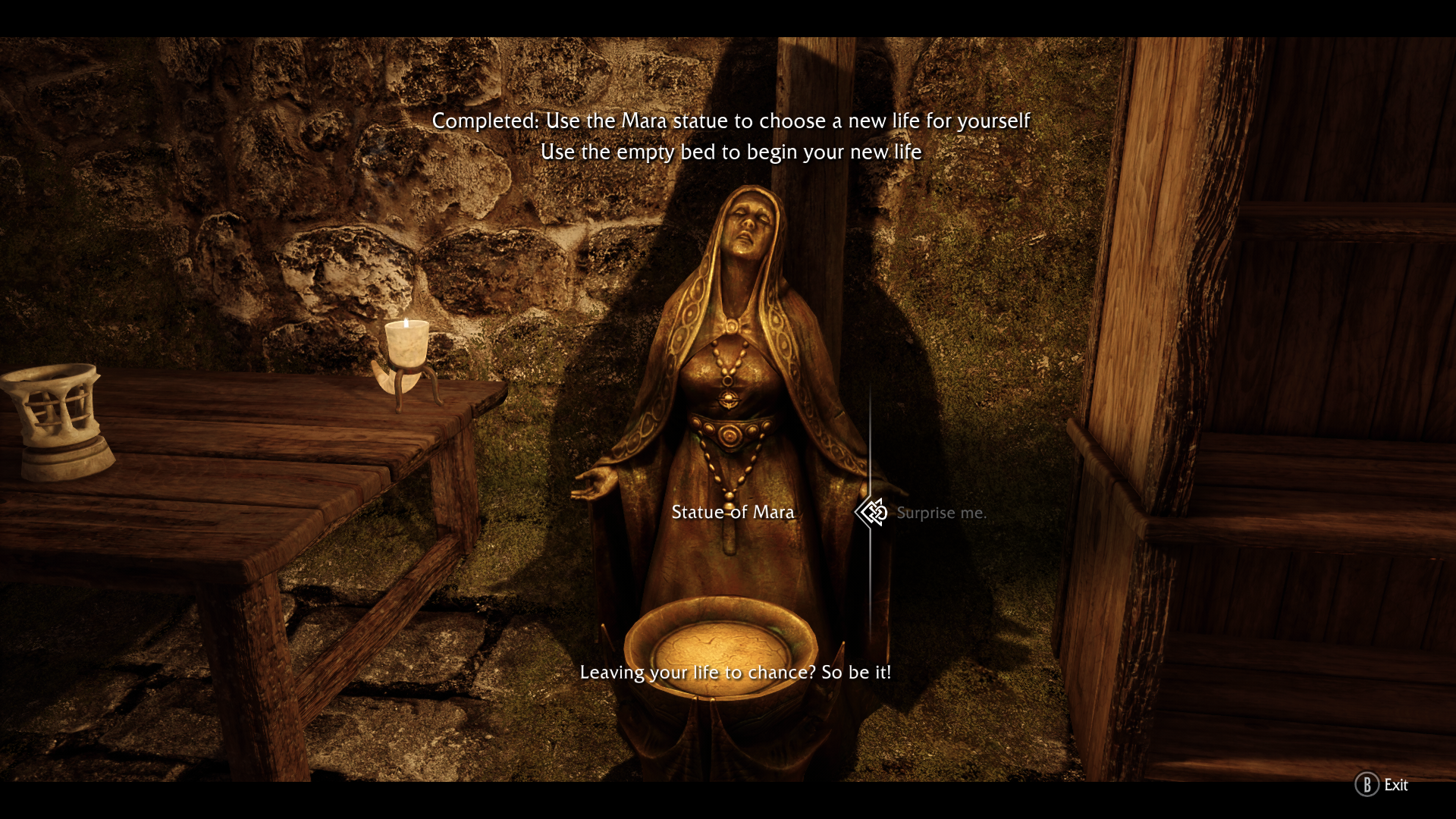 Monywyr wanted to scream in frustration. What would have left Monilee's lips as a shrill cry instead emerged from Monywyr as a rumbling growl. Not what he was accustomed to, but it would do.

"Is this your new and fair wager, Nocturnal? That you follow me, nipping at my heels?"

The dark prince cooed in amusement. "Oh, Monywyr, your new parts have made your fierce. I like it. No, when you leave this place I'll content myself to watch from a distance. But make no mistake - when the time comes, I'll brook no defiance from you. My spike of rebirth will penetrate that tight rear of yours just as well as it opened up Monilee if you stray. Now go, back to Tamriel and back to our game. Dibella and I are getting bored."

At that, darkness began to close on Monywyr, pulling him down into a dreamless sleep. And then he was awake, surrounded by the smell of pine and lavender, and a cool breeze. A warm fire crackled not far from the bedroll he lay upon. Standing, Monywyr looked up into the sky to see a rainbow arcing over a midday moon. Before he could truly appreciate its beauty, however, another shape filled the sky - the black dragon he had witnessed a lifetime ago. 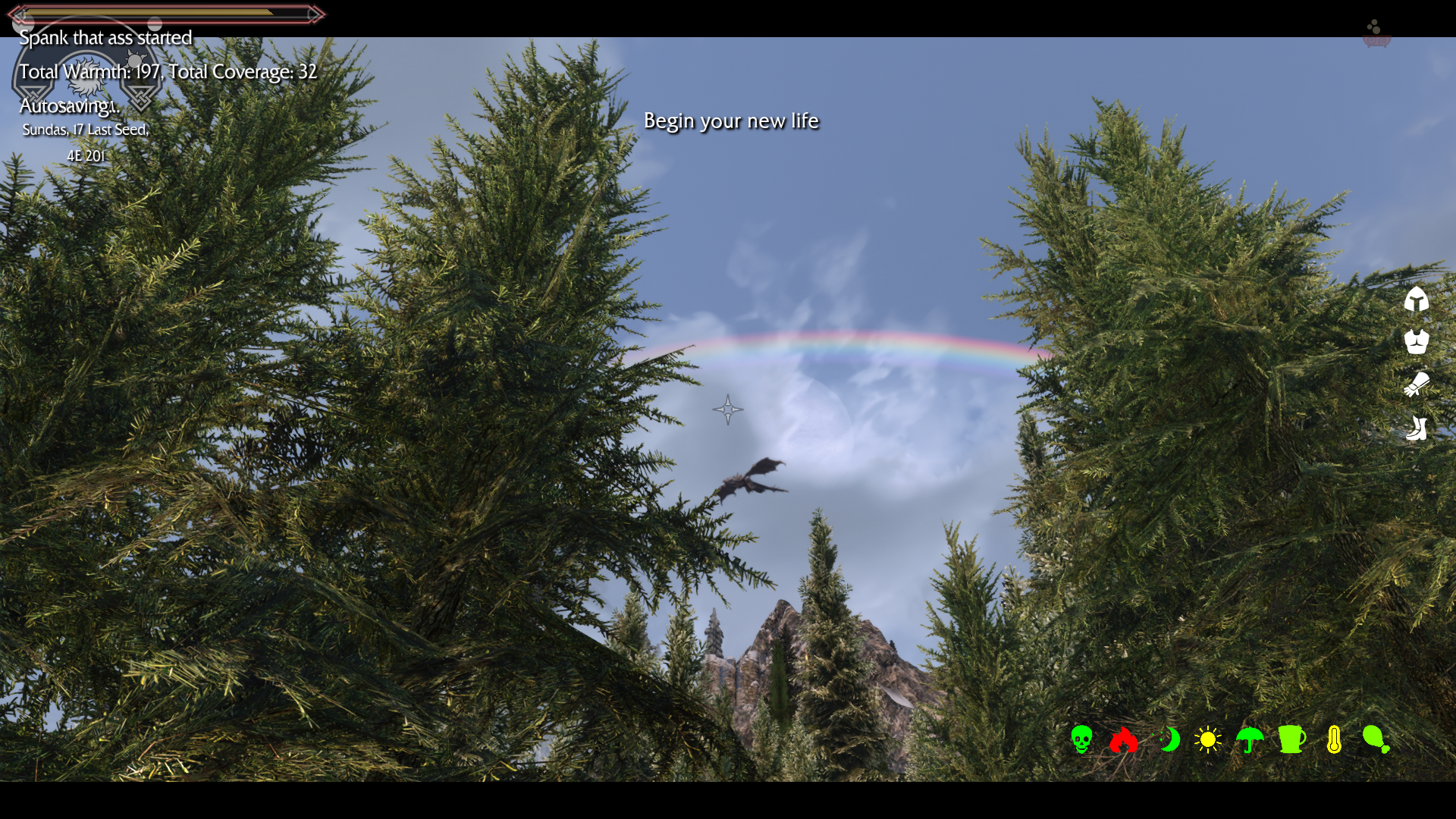 Seemingly unaware of Monywyr, the dragon lazily crossed the sky before receding into the distance. Monywyr took a second look around him and realized this camp must be at the outskirts of Helgen. Had Nocturnal conspired to transport him back to the moment of his Dragonborn awakening?

Before he could contemplate this further, a new voice caught he attention.

"Back off. I'm only warning you once. I'll be taking whatever you've got squirreled away at that camp of yours."

The speaker, clad in iron armor and wielding a long bladed sword, was approaching him fast. When Monilee had first arrived in Skyrim she'd have had no choice but to flee from such a challenge. Indeed, she had been forced to flee from a bandit under very similar circumstances. But Monywyr could feel that while his body might be new, his mind still contained all of Monilee's hard-won skill and experience.

Looking hard at the man, he shouted, "Fus Ro!"

The warrior laughed, "What? Is that supposed to scare me? You're funny, knife ears, and so I won't gut you for that, but now you need to scram."

So Monywyr had lost the power of Thu'um. In retrospect, that made sense - transported back to before the battle of the west watchtower, he would not have absorbed any dragon souls yet. Fine, he conceded, we'll do this the hard way.

Monywyr had observed that he was now clad in furs, and a simple but sturdy hunter's bow was close at hand. He picked it up and nocked an arrow.

"I think not," he replied to the bandit. "Best that you scram, I think."

That earned an angry roar from his foe, who began charging up the hill towards Monywyr's camp. He managed to dodge Monywyr's first bowshot, but the second struck true, sending him to the ground. 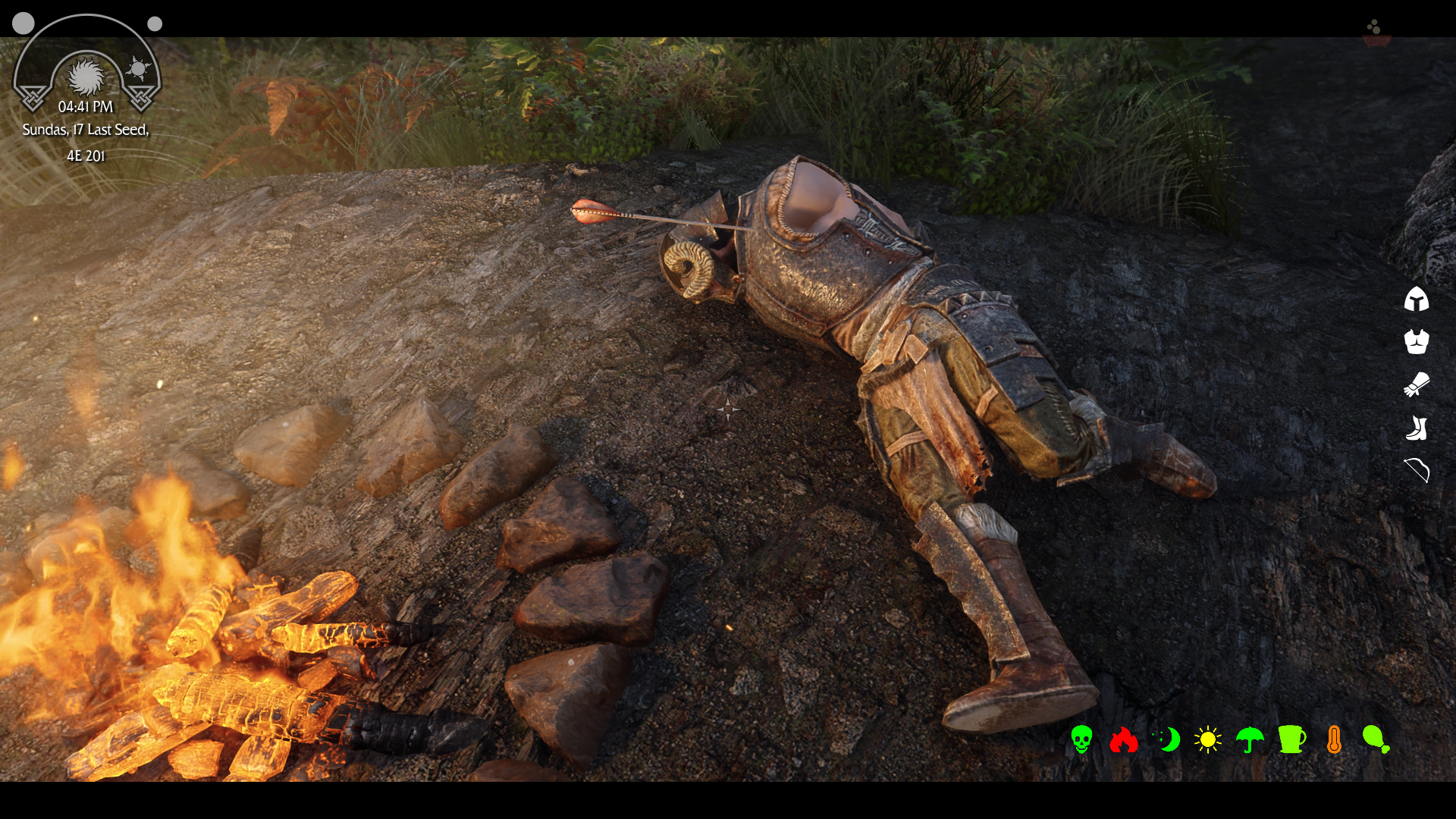 "Hmm," Monywyr said out loud, "that'll do nicely." Breaking off the arrow, he stripped the bandits armor and rifled through his possessions. Mostly junk, but he did find a couple valuable looking gold rings. Next Monywyr took stock of his own camp. Ample food, a woodcutter's axe, and some coin and valuables. Perfect, he though, this will be enough to set me on my way.

Then, rubbing his chin, he groaned slightly, adding, "I need a bath and a hair cut." 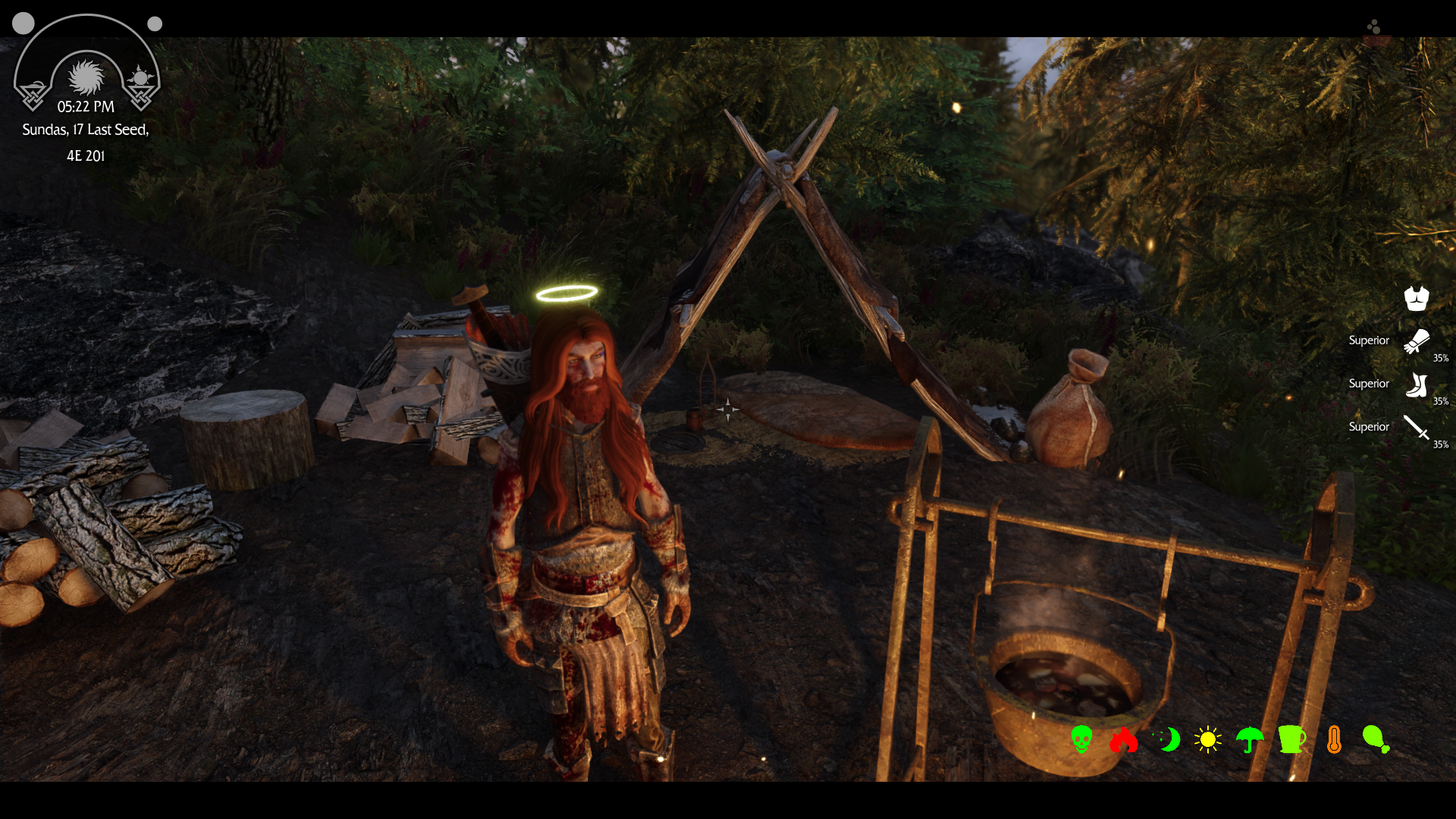 He knew what was expected of him next. He'd sift through the ruins of Helgen - finding nothing - then warn Riverwood of a dragon attack that would never come. This in turn would take him to the court of Jarl Balgruuf, to the west watchtower, and then to High Hrothgar, with loyal Lydia in tow. And Monywyr wasn't going to do any of those things. If he was going to defy Nocturnal again, now was as good a time to start as any. He'd go north till he reached Lake Ilinalta, then west and south to Falkreath. From there, he'd hire a carriage to Winterhold and... well, he'd figure out the rest from there.

He'd walked this route before in his past life, and he knew what to expect. A few bandits, easily felled, and then the Guardian Stones. This time, Monywyr focused on the Mage Stone, the better to prepare him for his journey to Winterhold. Any doubts he'd harbored about the nature of how he'd acquire this knowledge were put to rest, and once again the stone's knobbed probe extended from within. Painfully the thick, bulbous segments pushed past his anus to force their way into his inner cavities. Pain soon mixed with pleasure as the stone seemed to tickle the same hidden place that he'd seen Edippa stimulate on Lucien. As the mixed pain and pleasure completed his ties to the Guardian Stone, he wondered where his former companions were now. Would any of them remember him? He would have to find out, in the fullness of time. 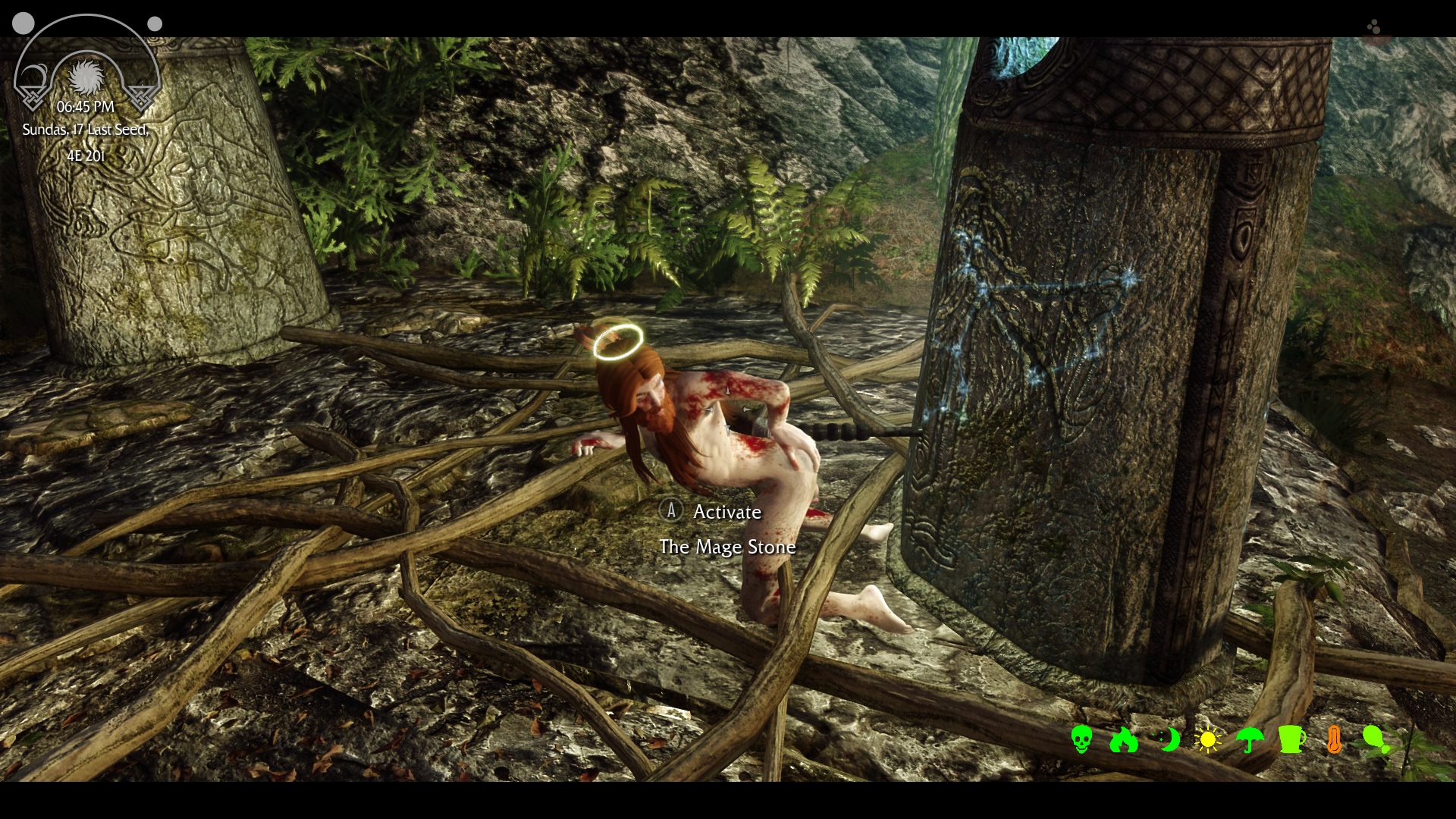 The ritual complete, Monywyr dressed himself and continued his journey. Just as he reached the bank of the White River, he heard a voice call out.

He almost ignored it. Monilee probably would have if she'd heard it on her return from Helgen, the trauma of the Solitude Kennel still fresh in her mind. But Monywyr felt differently. Perhaps it was the fact that it was a woman's voice? Were newfound male desires overriding his good sense? Perhaps, but he still found himself searching for the source of the voice amidst the now gloom-shrouded trees to the south.

Soon enough, he came across the source of the shout - a woman, dressed in the light garb of a native hunter and covered in blood.

"You need to help me," she said, "there's a wounded girl over there, by the cliff." 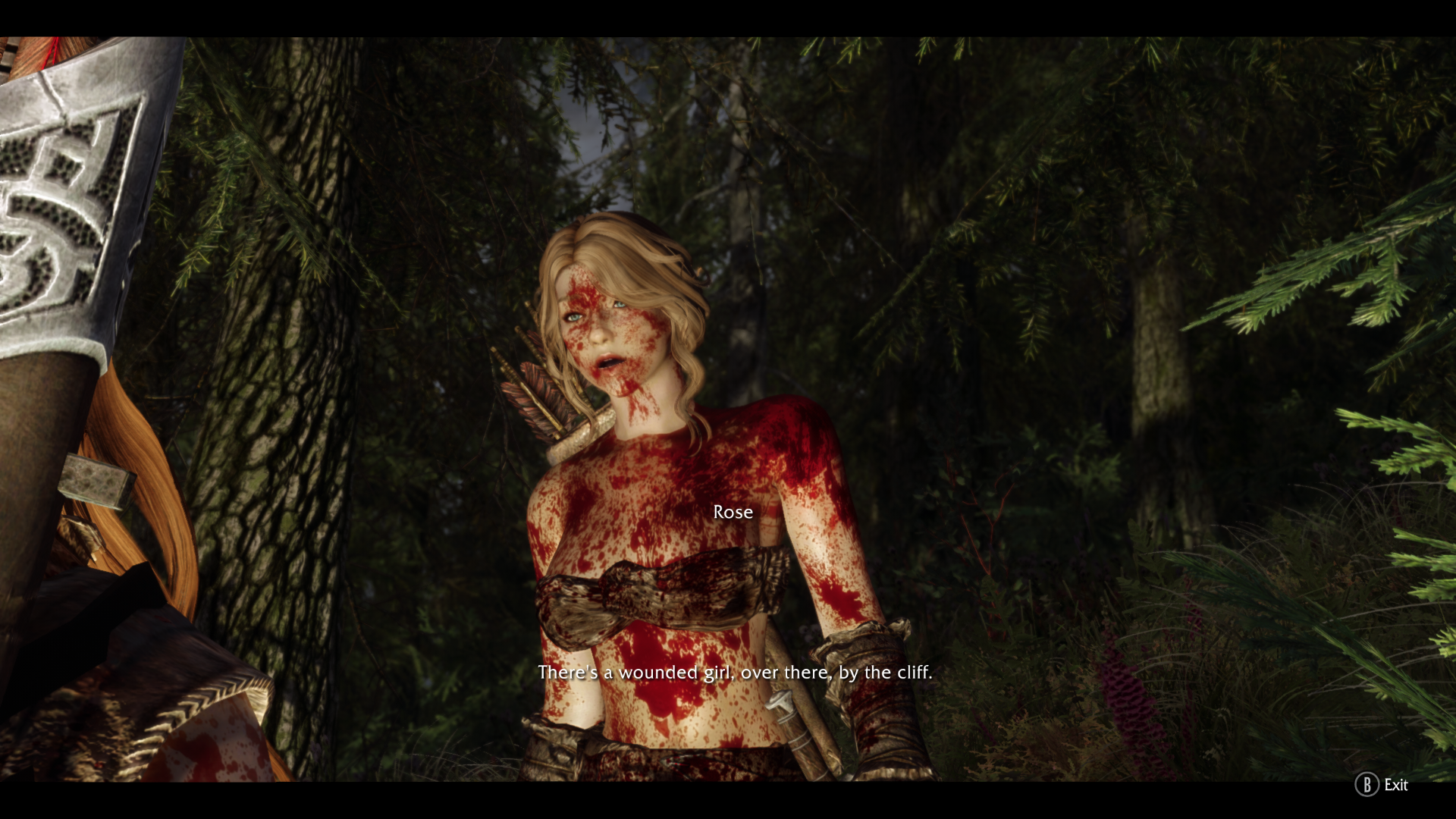 Monywyr wondered if this was another one of Nocturnal's tricks, meant to turn him from his goal of reaching Winterhold. Somehow, though, he didn't think so.

The woman swayed slightly, seemingly almost overcome by her distress.

"Calm down," Monywyr said. He almost stopped then and laughed. In her youth in High Rock, how many men had said just that to an excited Monilee, and how many times had she wanted to hit them. How many times had she hit them? Too many to count! Before the hunter could act similarly he pressed on, "tell me what this is all about."

"They're looking in the wrong place," she muttered, perhaps not in true response to Monywyr's words, then she focused on him and commanded, "she's too heavy to move, help me get her to safety."

As if in anticipation of Monywyr's next question she added, "I have a camp not far from here. She'll be safe there... if she survives."

Thinking back to the woman's non sequitor before he pressed, "Who is looking for her?"

"I hope I don't live to regret this," he muttered, but he followed the woman's lead. The hunter led Monywyr to a cliff edge where, true to her word, a young woman lay still against the ground. 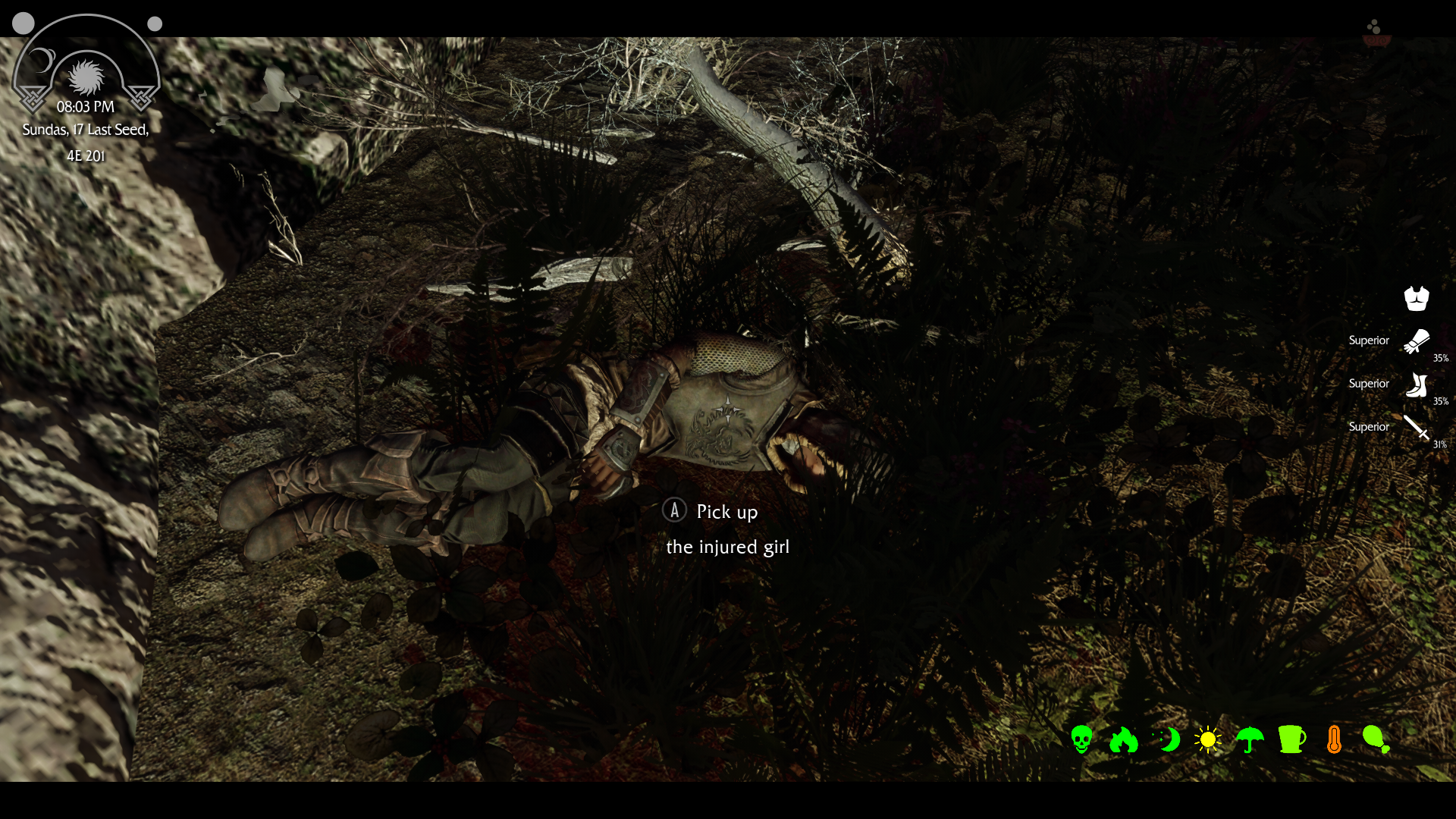 "If you carry her," she prompted, "I'll lead the way. Take it easy and be careful." The hunter led Monywyr through the woods, pausing here and there but generally pressing west until they reached a fishing camp that, somewhat to Monywyr's annoyance, lay not a hundred yards from the Guardian Stones. From there, they took a boat to a remote campsite along the lakeshore. Checking on the girl, the hunter - Rose, she gave as her name - grew quickly dismayed.

"There's a deep cut around her midsection," she explained. "Without her armor she would have been disemboweled." She wiped sweat from her forehead, taking a moment to think, then continued, "I need a few things if she's going to survive. Will you stay and help?"

Again Monywyr considered declining. He'd done his good deed, after all. But he found himself feeling a strong desire to help this woman. Against his better judgment he agreed. Really, it didn't seem so bad. Yes, he needed to go to Riverwood, which did seem suspiciously like it was funneling him along the path he'd walked when he was Monilee, but at the same time... he found it hard to say no to Rose. Definitely male desire overriding common sense, he concluded.

This is the first session using version 8.0.4 of SLaVE. No new issues to report so far, but see below for a summary of baseline changes since the 8.0.3 build.