Here's the deal: I'm walking to Goodneighbour so I can sell some Product at the Auction House. The Product in this case is thirteen slavegirls, pregnant, handcuffed and barely dressed. I set myself some rules for the journey:

So far I've managed to get as far as Abernathy Farm, where things got a little out of hand. Like a good party should, this one broke up just as dawn was breaking. I fed, fucked and slept through to 4PM. Then I woke up to an unpleasant surprise. The Atomguard Hunters are tough vampire hunters, armed with stakes that paralyze for ten seconds and hammers that take a third of my health in one blow (and I have End 10 and I'm level 26). The also have a tendency to spawn wherever you happen to be sleeping. While you're asleep. Four of them in this case. Luckily, the rules say nothing about "dead is dead" mutter mutter grumble...

Anyway! After waking up from an unpleasant dream where I was ambushed by Atomguard, I got up and did my morning feeding-and-fucking ritual. I actually had a volunteer, this time. I was going to feed from one of the yellowtops, but blondie here pushed to the front of the queue. Quite rudely, really. 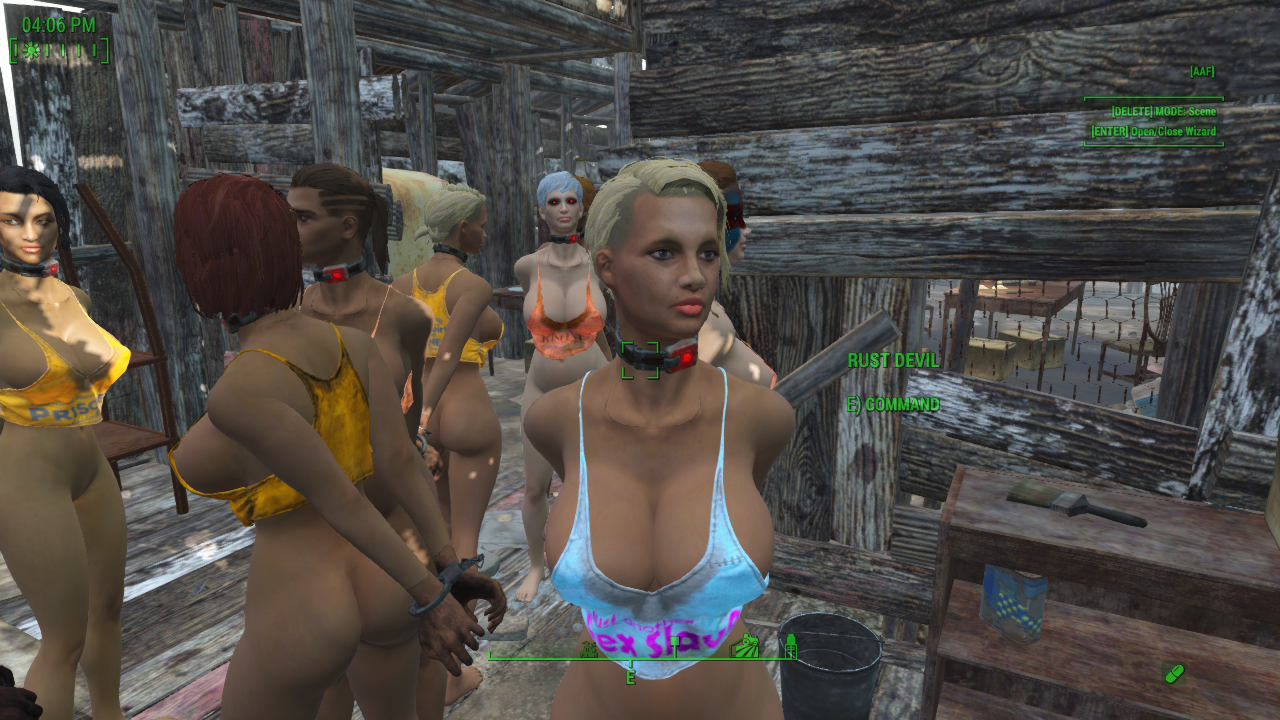 She must have wanted it bad.  Would have been churlish to refuse her, really. 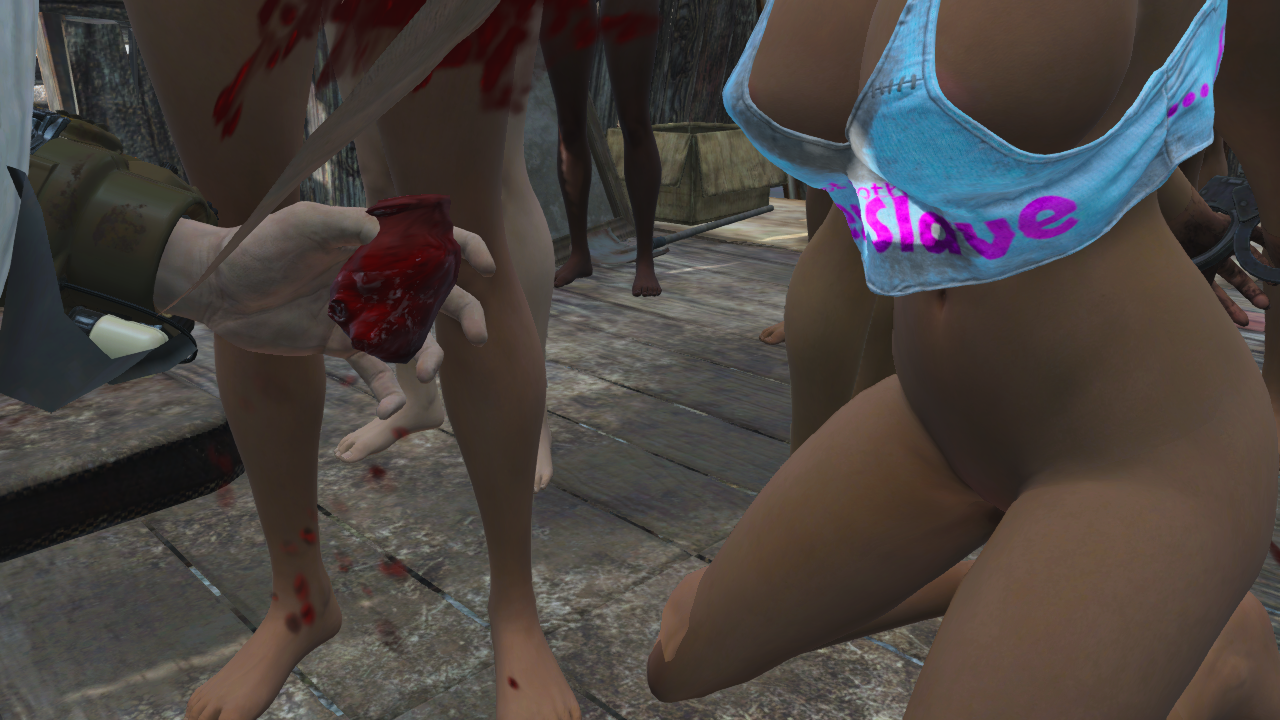 I'll be honest, I'm not sure if she got her fucking or not. I still had Atomguard on my mind and wanted to clear out as soon as possible. Just as well I did, too! I was barely out of the farm when they showed up looking for me, right on the edge of VATS range. I kept my head down and headed back to Concord. If they're still there when I go back, I'll deal with them then.

Last night, at the party, Blake asked me to sort out some raiders at Olivia. Maybe some of Ack-Ack's old crew didn't get the message. Anyway, upshot is I'm going to make a bit of a detour and probably acquire some more Product in the process. Although looking at the map, it may be more than a small detour... 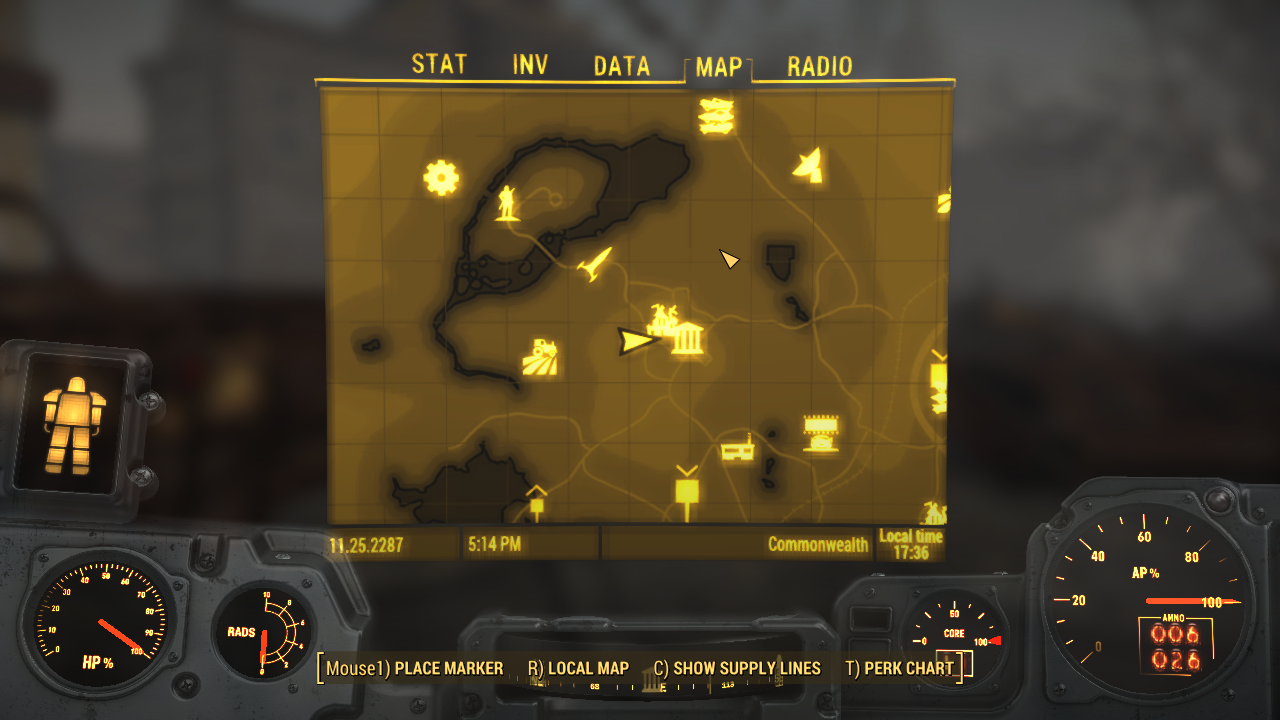 The rules say "follow the roads" and that means I'm going to go through Concord, swing up past Thicket Excavations and come at Olivia from the South. So I do that. I swing past the parking lot behind at the edge of town. There's a merchant called Dreth in there, today. She has a couple of Gunner bodyguards and sells a paltry selection of guns and ammo. I assume some mod added her and that she'll be the object of some quest or other. I decided to leave them alone.  She's got a face like the rear end of a mule, anyway.

Moving on, took a moment to scope out (literally) Thicket Excavations. 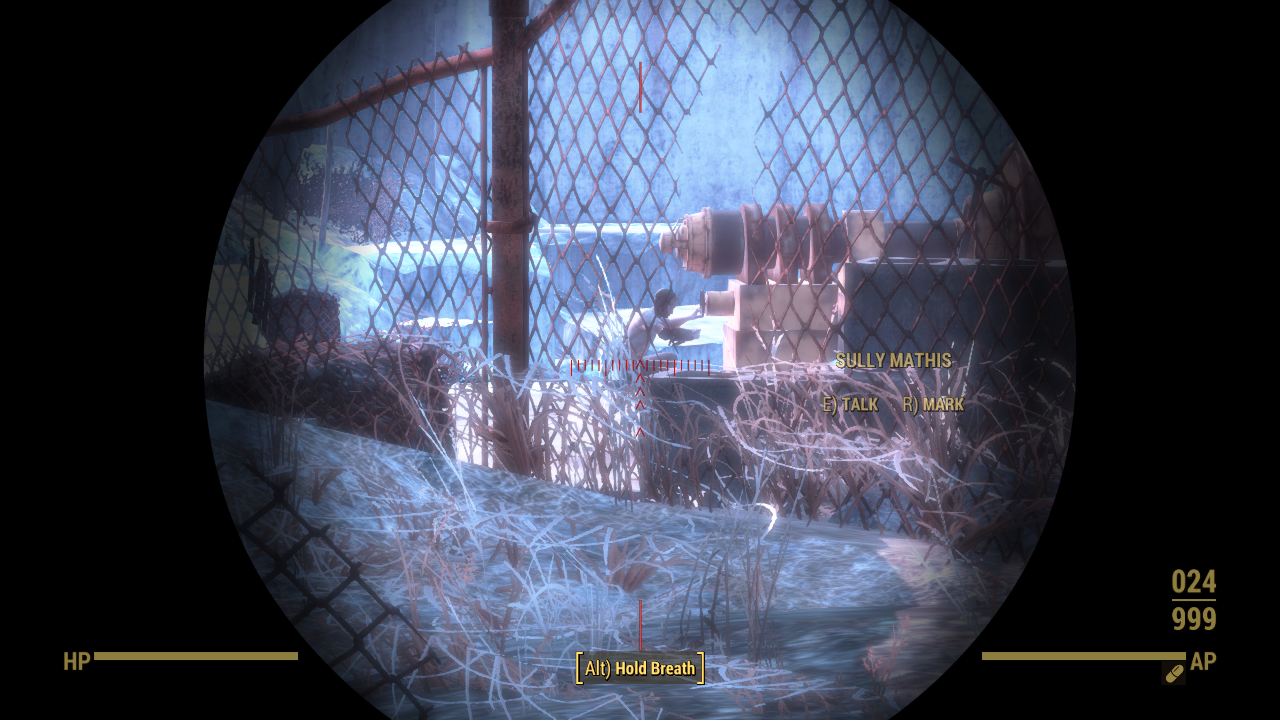 Normally I'm happy to help Sully out., mainly because it makes it so much more satisfying when I eventually get a mission to cap his smug ass. However, the thought of swimming in radioactive water, trying to find  valves to turn, with the Product getting in the way at every turn ... well, it doesn't bear thinking about. Sully will have to wait to get his quarry working. (What the hell does he even want down there? He goes to a lot of effort to the fortify the place, just so he can live in a damp shack at the bottom of a pit. Oh well...)

Rest of the trip passed fairly smoothly. Had a bit of a dust up with feral mutts and then again with exploding mole rats, but the sentries at Olivia didn't notice a damn thing. I marked them, and took them down with barely a fight.

Inside, the place was empty except for Ack-Ack's room which had four raiders in residence. I leaned around the corner, marked each of them, then dropped them with Kellogg's wonderful revolver. The problems started trying to process the new slaves.

See, the rule is that they all get fucked, and they all get pregnant. The trouble is keeping track of which ones you've done. Strip 'em first and you can lose them in the crowd. Don't strip 'em and you're never sure which one's you've done.  So this time around, I figured I'd fuck them before I collared them. That way, the ones that need bonking stay still, so I know who still needs doing. 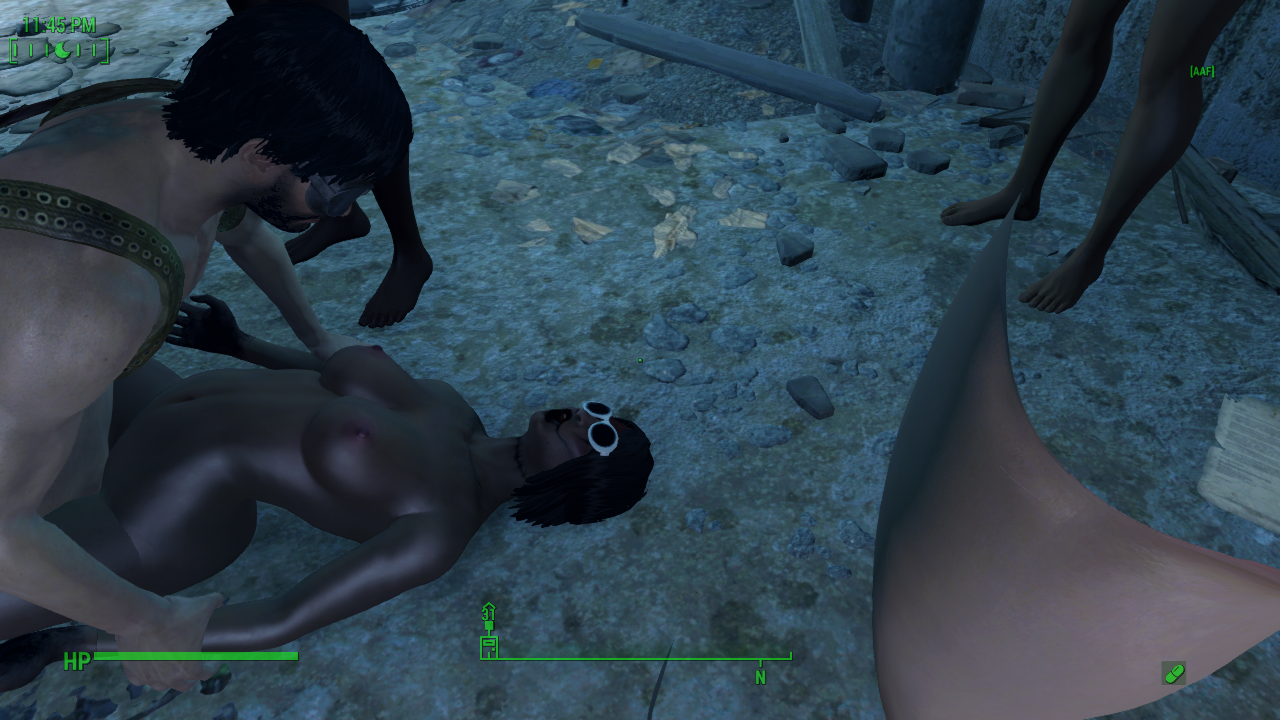 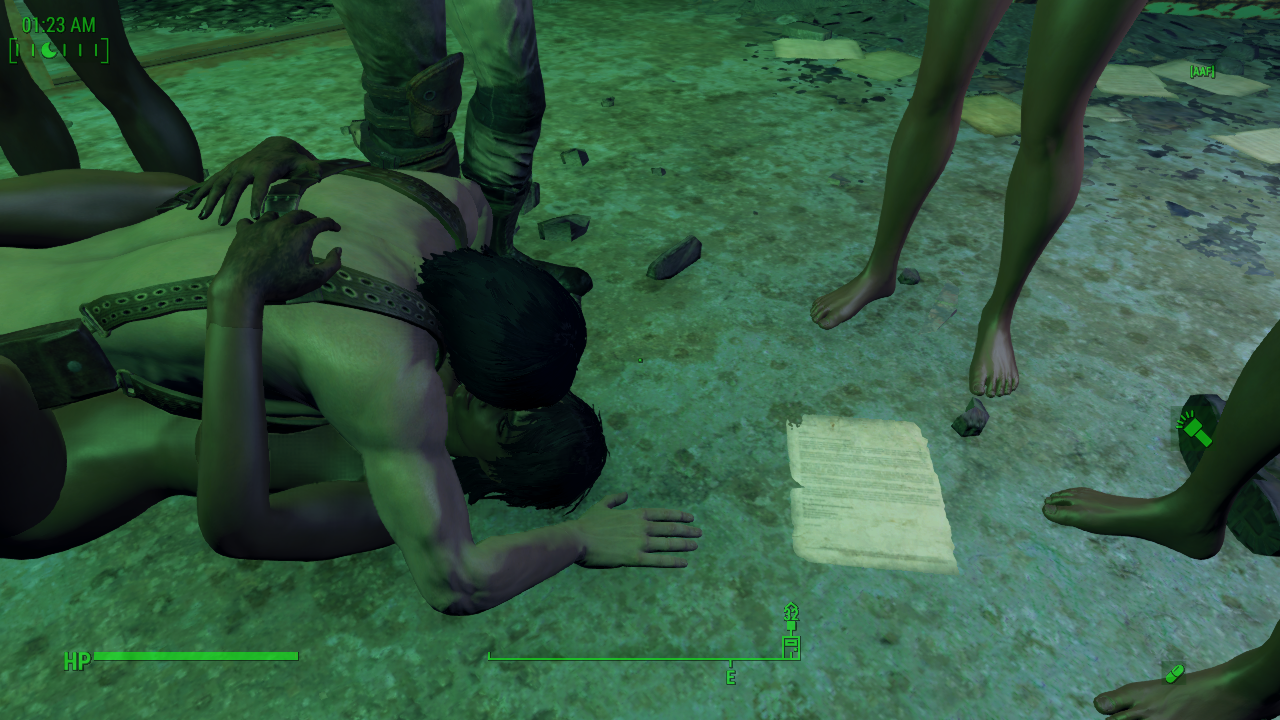 And the next one. I think those boots belong to Smiler, who hasn't been stripped yet. I love the way everyone crowds around to see. 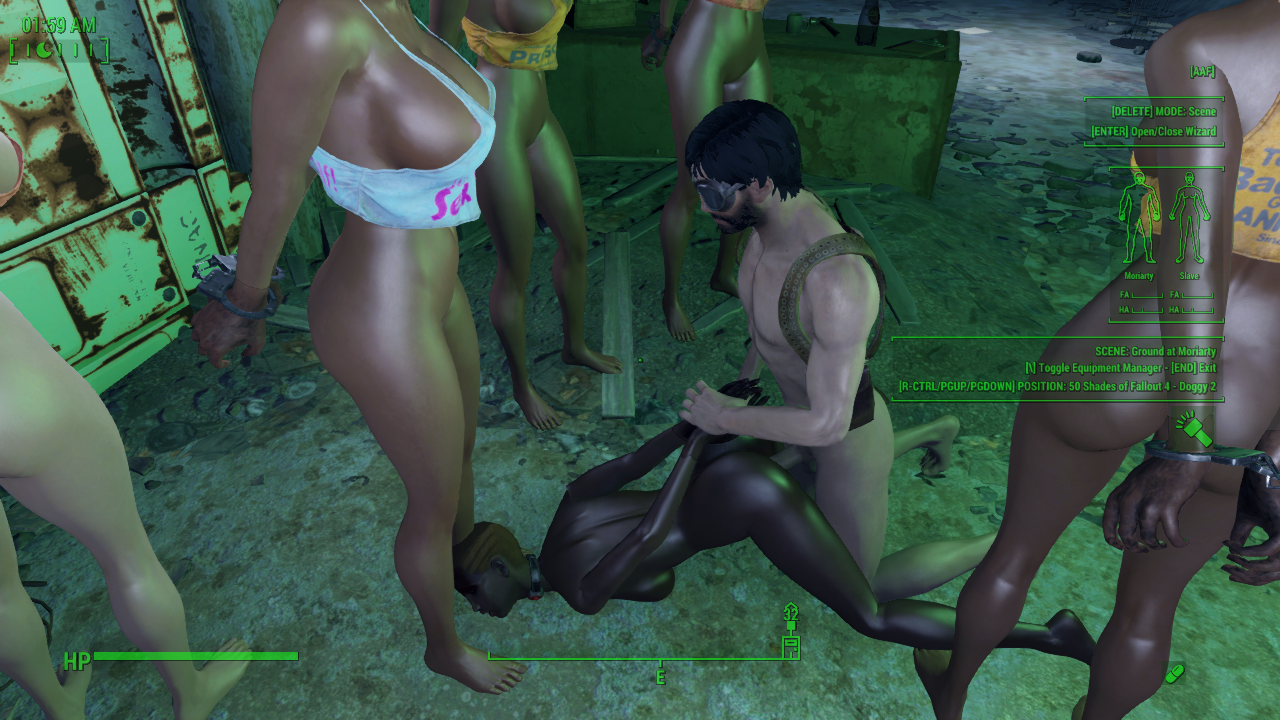 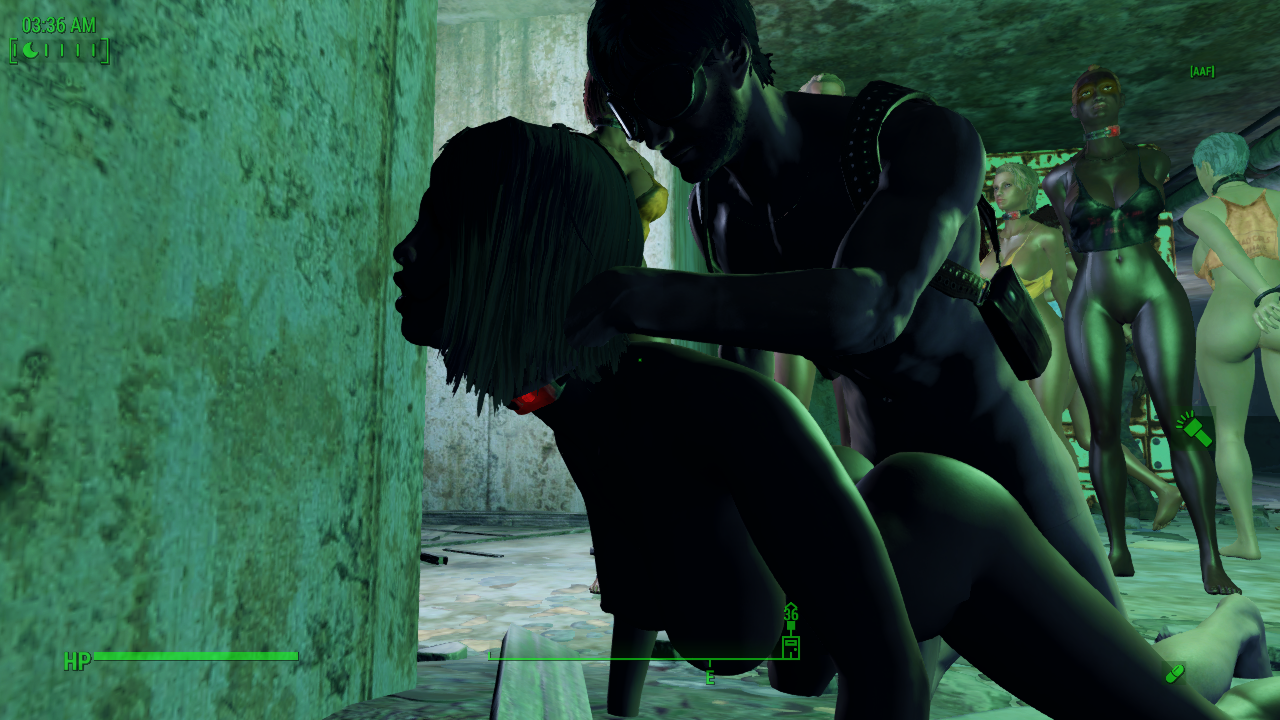 Having got them all in the Family Way, it was time to get them all stripped and outfitted as best I could. Top tip if you ever do this: tell them to take their clothes off, but make them carry them. Take their ammo and drugs, but they can haul the weapons for you. Otherwise encumbrance will be a constant problem. 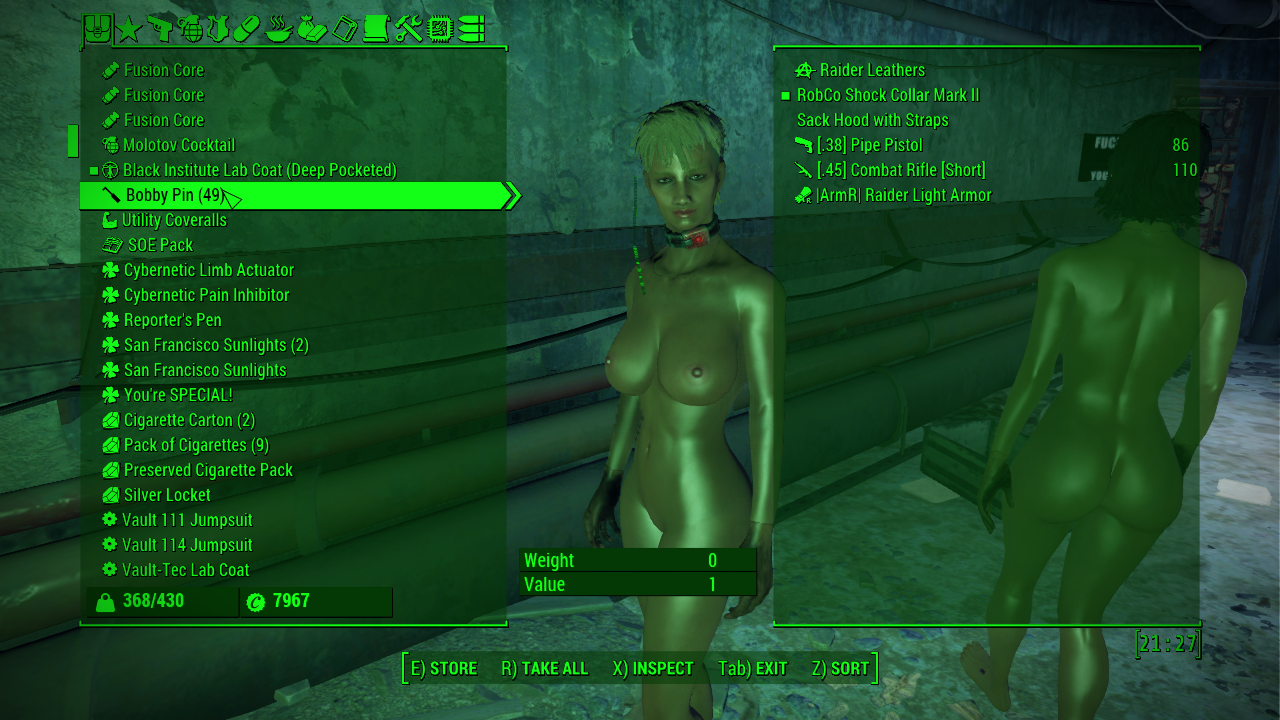 You never quite know what you're going to find under one of those sack hoods. This one cleaned up decent enough.

Speaking of encumbrance, the loot from Olivia was enough that I had to offload some junk. Blondie "volunteered" I gave her the hat to wear so I can remember which one has the goodies. 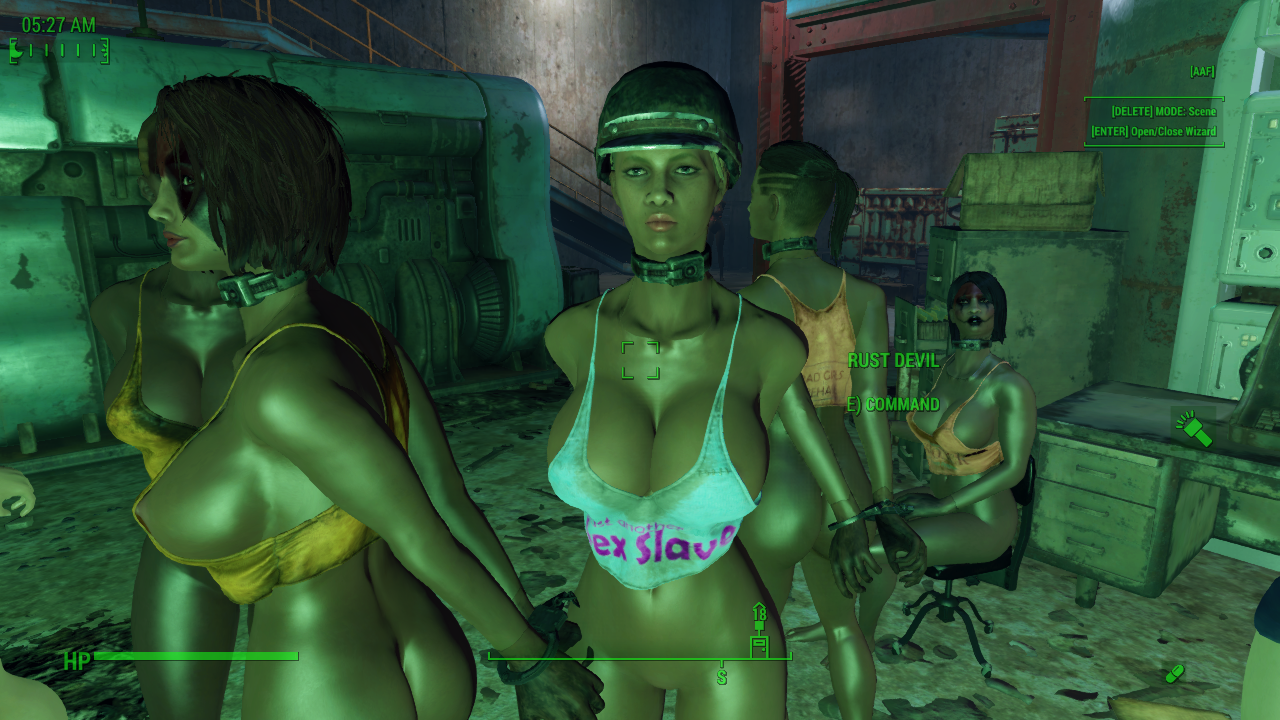 After that, there were just the two up topside, who I'd left where they were on the grounds that they'd only get in the way otherwise. And I already had plenty of help in that department.

Breeding one of the sentries: 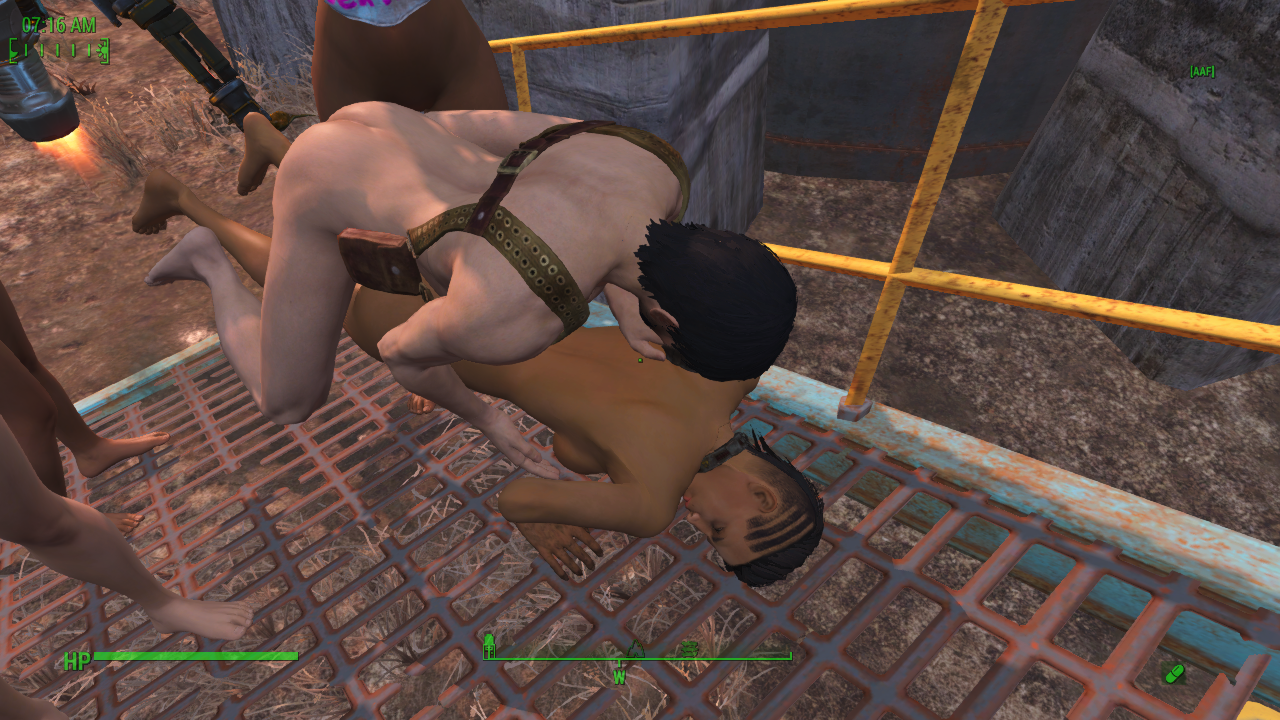 She seemed pretty chill about it afterwards. 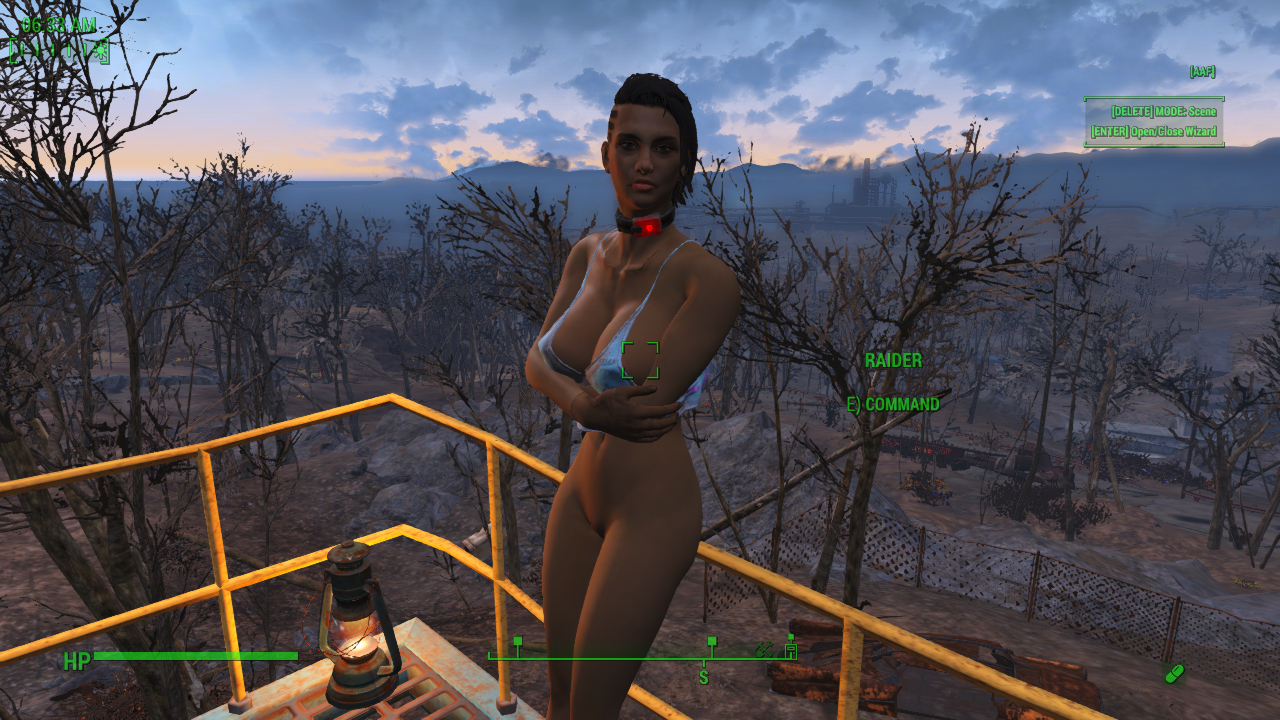 Partly that's down to the Handcuff shortage. If she was cuffed she wouldn't be able to idle like that and she'd be shoving her boobs in my face at every opportunity. As it is, she gets to relax. I really need to find some more handcuffs. 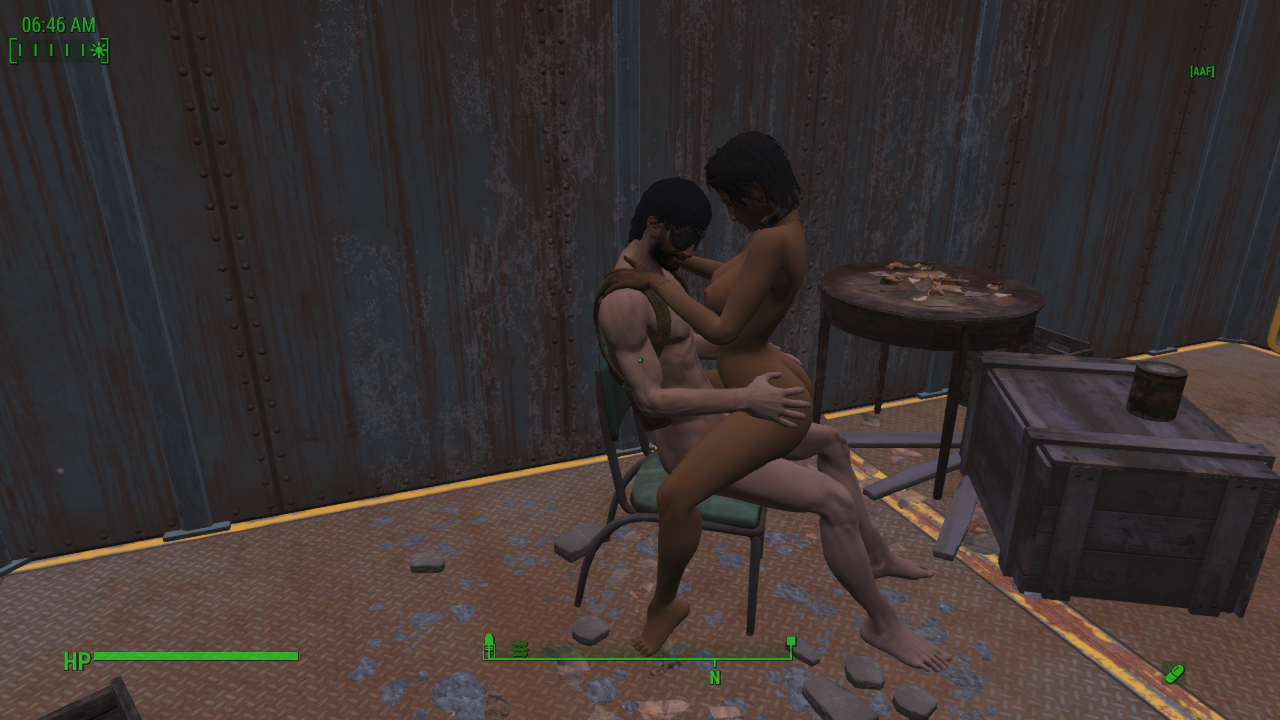 And about this point, I realise that I left the PA downstairs in Olivia, and that sometime in all this debauchery, the sun has come up again, and I'm about to start taking sun damage. So I end up elbowing my way through the Product so I can get to the bunker door. And then again, on the way out. 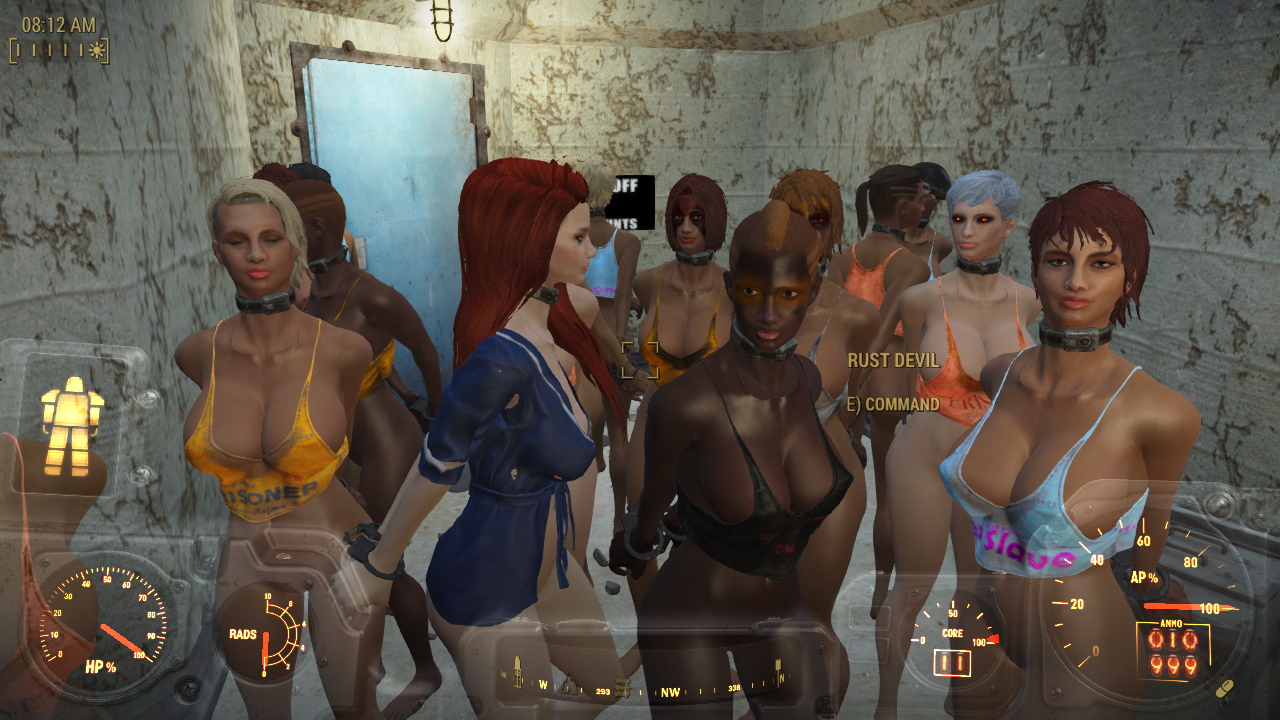 You know, I sometimes feel I struggle to convey the scale of the problem here, but this I think illustrates it nicely. Everywhere you turn, there's a sea of boobs. 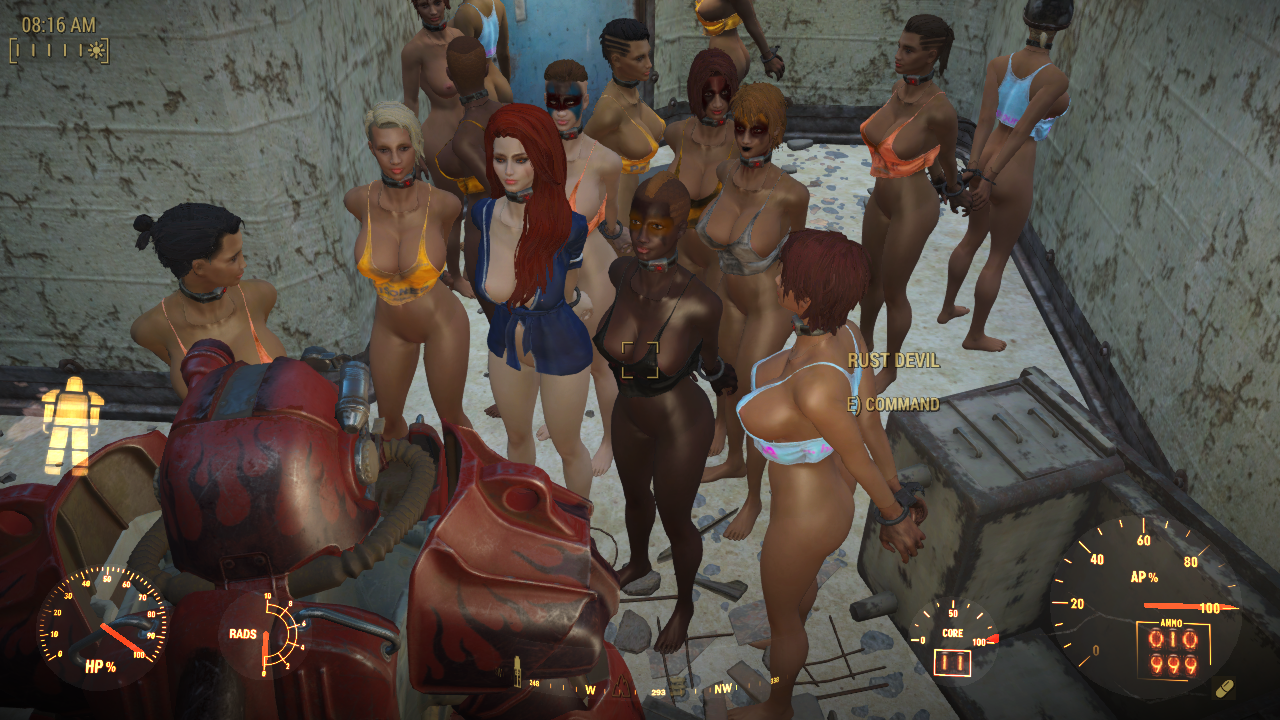 It's a nice problem to have, but  a problem nonetheless. But nothing that can't be solved in Goodneighbour.

So, that was Olivia, and the headcount now stands at nineteen sluts. I'm thinking I'll leave the Abernathys in suspense and head south to Starlight. We'll see how that works out next time.