This blog is intended to be the information and advice that I wish I had been privy to when I first came to LoversLab (LL). This blog is NOT, in any way, shape or form, an official introduction to the site. Like others I struggled and lurked when I came here. It was months before I actually posted anything. Like a lot of other people what I learned I learned mostly through trial and error. However, the most satisfying things I learned were when helpful people pointed me in the right direction. If I can do that for even a few people I will consider this blog a success.

I need to give you a little context to help explain how most of this blog is intended to be organized. I was a great fan of the Skyrim mod "Paradise Halls" which could be found on Nexus. The development of that mod appeared to simply stop after a while which I found a considerable disappointment. One day I was on Nexus and, for some reason. I checked out the mod and its support thread. It was there that I found that Paradise Halls Enhanced had been reborn here on LL. I came here and was ecstatic to find, not just this mod, but to see that it had been developed and placed within a framework that would allow my character to have sex. Then, like many other people (I would expect most) I spent a great deal of time lurking (looking at mods and threads without posting a word). Finally, I made the plunge. First it was asking questions, then it was playing games, sharing opinions and finally, giving answers. (Now they all wish I would just shut up.) This is important to the blog because it is likely to be Skyrim-centric. Don't let that put you off if that isn't your game. When I get to discussing things that are game-specific I believe that you will find that the things I tell you about how to access information about Skyrim will be completely applicable to whatever game you came here for (Fallout, Sims, etc.).

With that in mind I would like to talk about the site's Rules first. Here is a copy:

Don't panic, there will not be a quiz. I was on the site for months before I was aware of these Guidelines. That's a shame because while I just listed them for you they can also be easily found. If you go to the bottom left hand corner of any page on LL (including this one) you will see a link that reads, "View Community Rules." Here is an example: 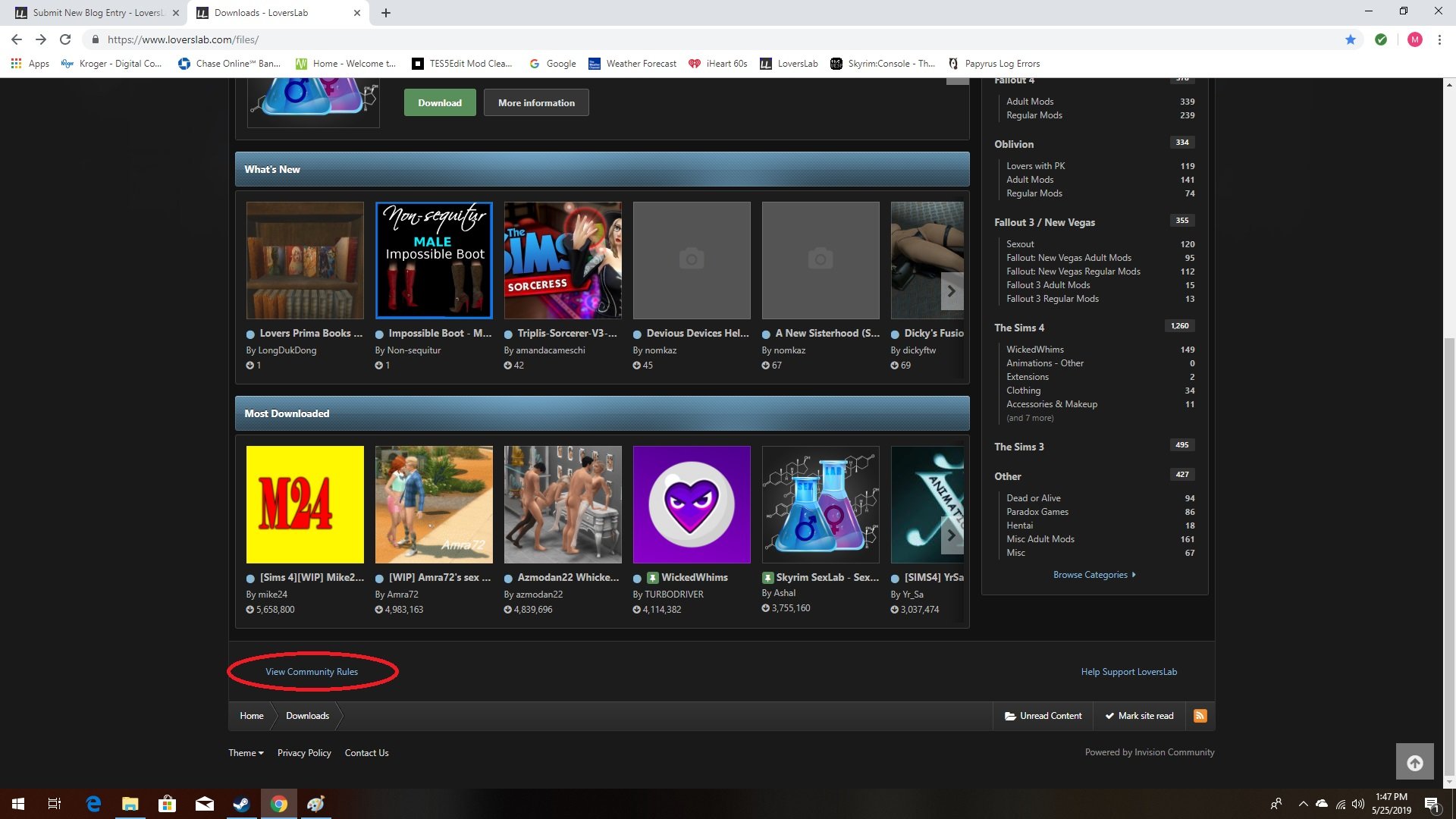 In the spoiler you will see a picture with the link highlighted. If you click it you will find another copy of the rules.

In addition, there is another place you can go to quickly find the Rules. If you go to the top of the page, on the right there is a bar (see below): 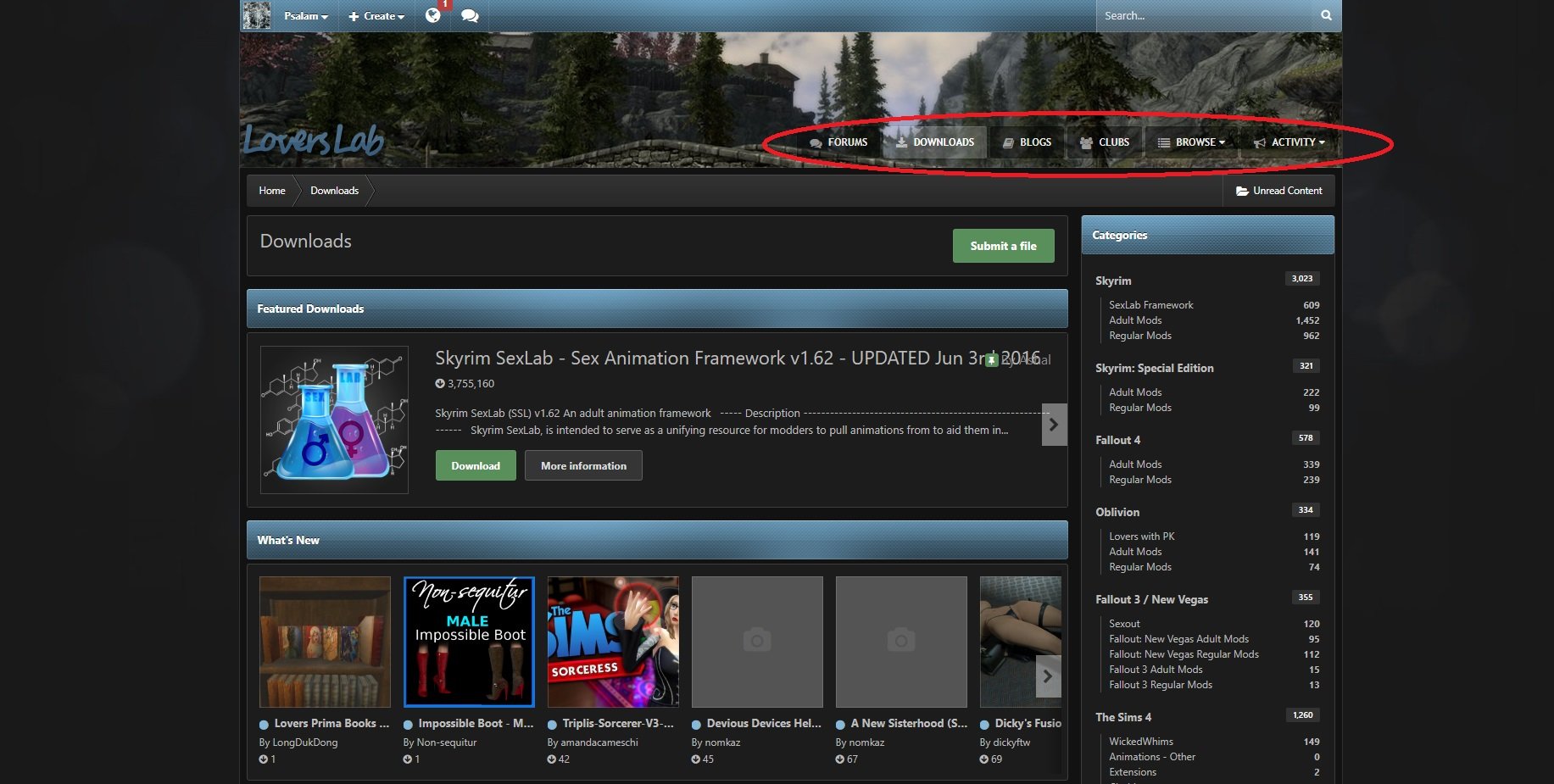 If you then hover over the bar where it says "Browse" you get: 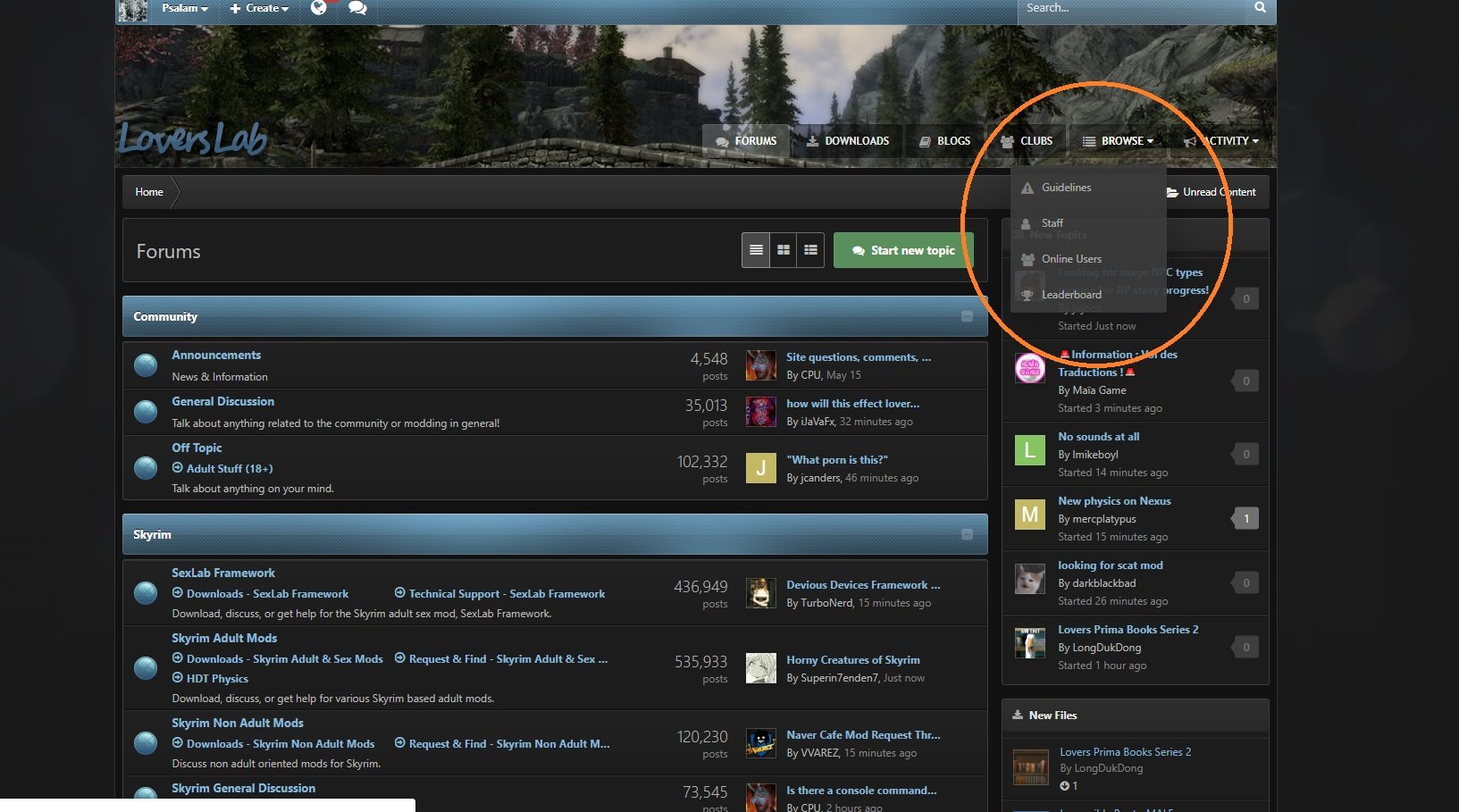 The first thing listed in the dropdown menu (highlighted in orange) is "Guidelines." If you click on it you can also review the Rules.

So, you are asking, why are you showing this to me? I have just shown you three different ways to access the site's Rules because there will almost always be more than one way to achieve your goal here on LL. In something as mundane as looking at the Rules you now have been shown three easy options. You will find, as you go through the site, and try to find things, that there are many ways to get to where you are wanting to go. Most of the time on this blog, I am only going to show you one way - the way that I have found easiest and/or best. As I have just pointed out, that does not mean it will be the only one and definitely not the only "right" one.

This site belongs to Ashal. He makes the rules. He chooses the moderators. He determines if you get to stay on the site or get thrown off. (Incidentally he is also the author of SexLab Framework which allow Skyrim characters to have sex). Please keep in mind that, while you are on this site you have effectively entered his home. Unlike many hosts, he has kindly posted the rules by which he expects company to abide (see Section A above). I find that if I keep the idea in the front of my mind, that when I am on this site, I am effectively in his house, it helps me to be a bit more polite and nice. This is not a store or other retail establishment. Neither Ashal, the moderators, the mod authors or your fellows here on LL owe you anything. You are not paying them for the privilege (even if you choose to become a contributor it is more like bringing a bottle of wine to your host's party than it is to paying for a service). For your sake, and everyone else's, please try to keep that in mind.

If you go back to the last spoiler which showed the Guidelines (just above) you will see that there are other choices in that dropdown menu. The second one is staff: 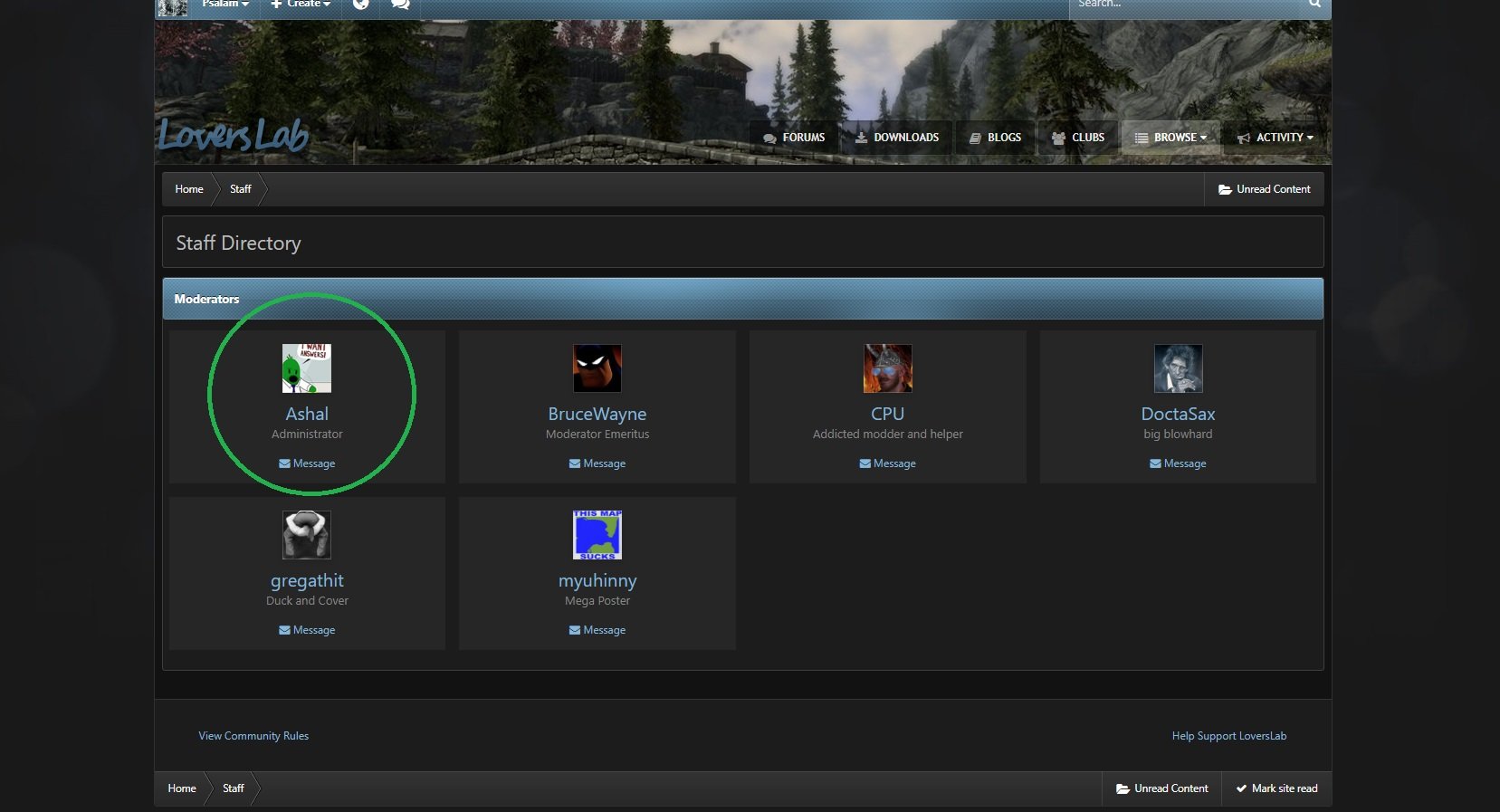 This contains the list of moderators. I have taken the liberty of highlighting Ashal's avatar in green. The people listed here (and only the people listed here) have the authority to speak for the site. If you find any of them addressing you it is in your own best interest (if you want to stay on the site) to pay heed to what they have to say.

Like the other people on this site, the moderators have been known to change their avatar (the small picture you see above their name). This means that you need to pay attention to whether they have the "moderator" tag on their message more than what their avatar looks like.

I think that this is enough for one post. I hope to get a bit more into the meat of the site with the next post.