This post is a sort of an addendum to the previous one. I had intended to include this content at the end of that, but I was literally falling asleep while finishing up the main body of that post, so this got peeled off to its own posting. And then delayed by LL being down every time I was about to get back to it. But to keep it from being too boring, I went and grabbed a bunch of random mid-killcam screenshots featuring one of the dozens of potential Automaton builds to pad things out with. 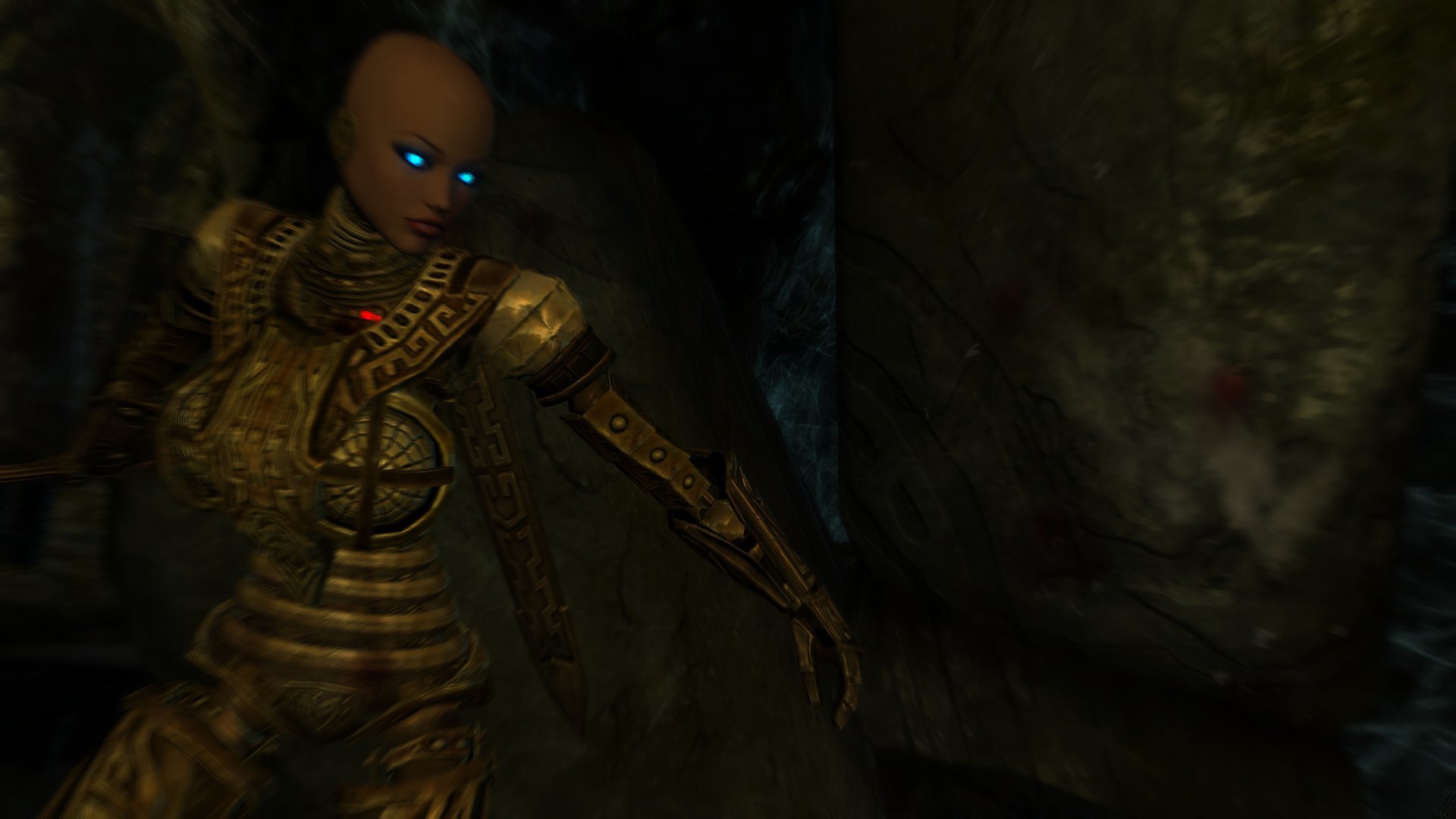 As development of this mod is coming into its last thrusts, there's still a few lingering questions and issues that I need to hack down. 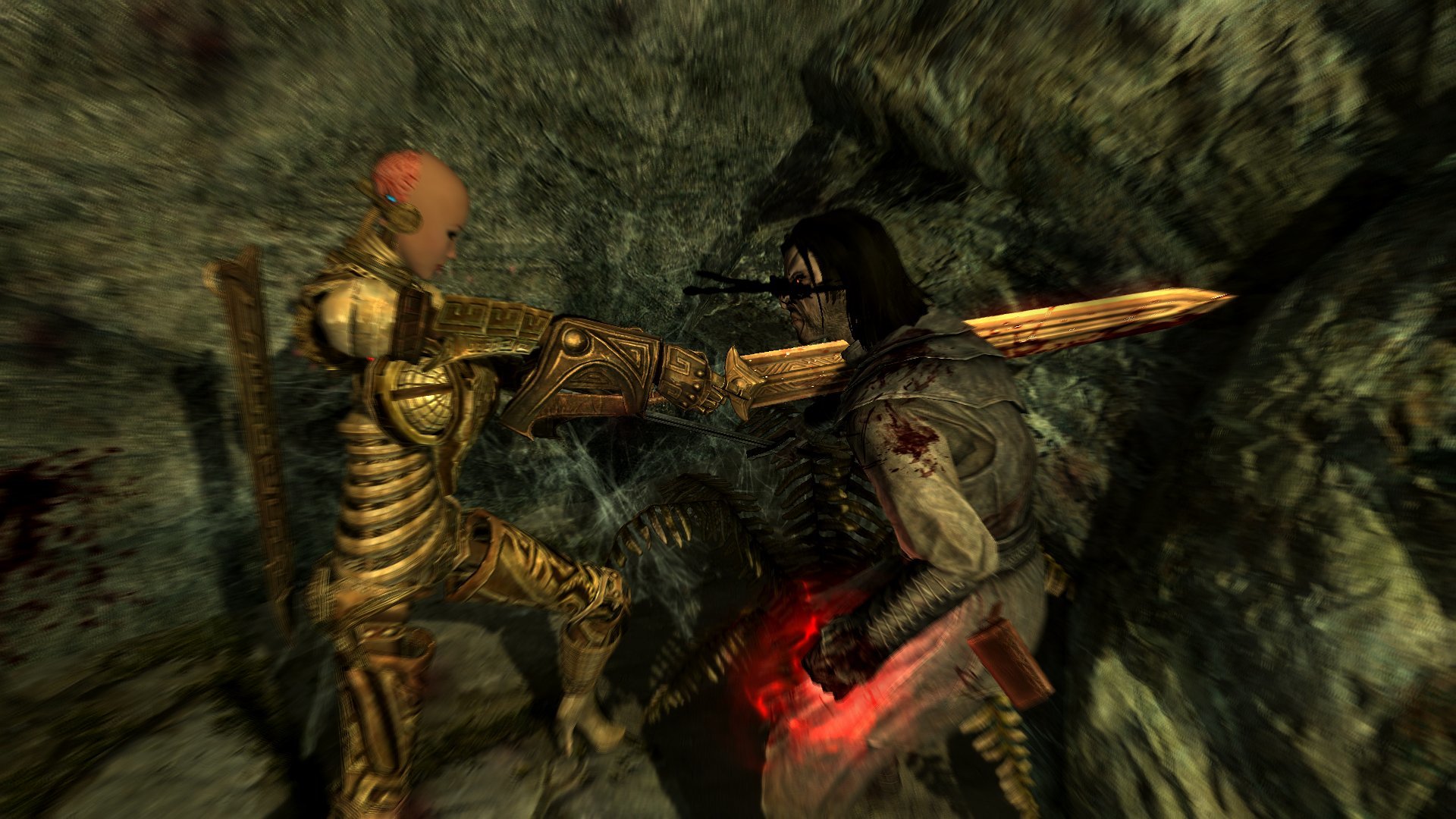 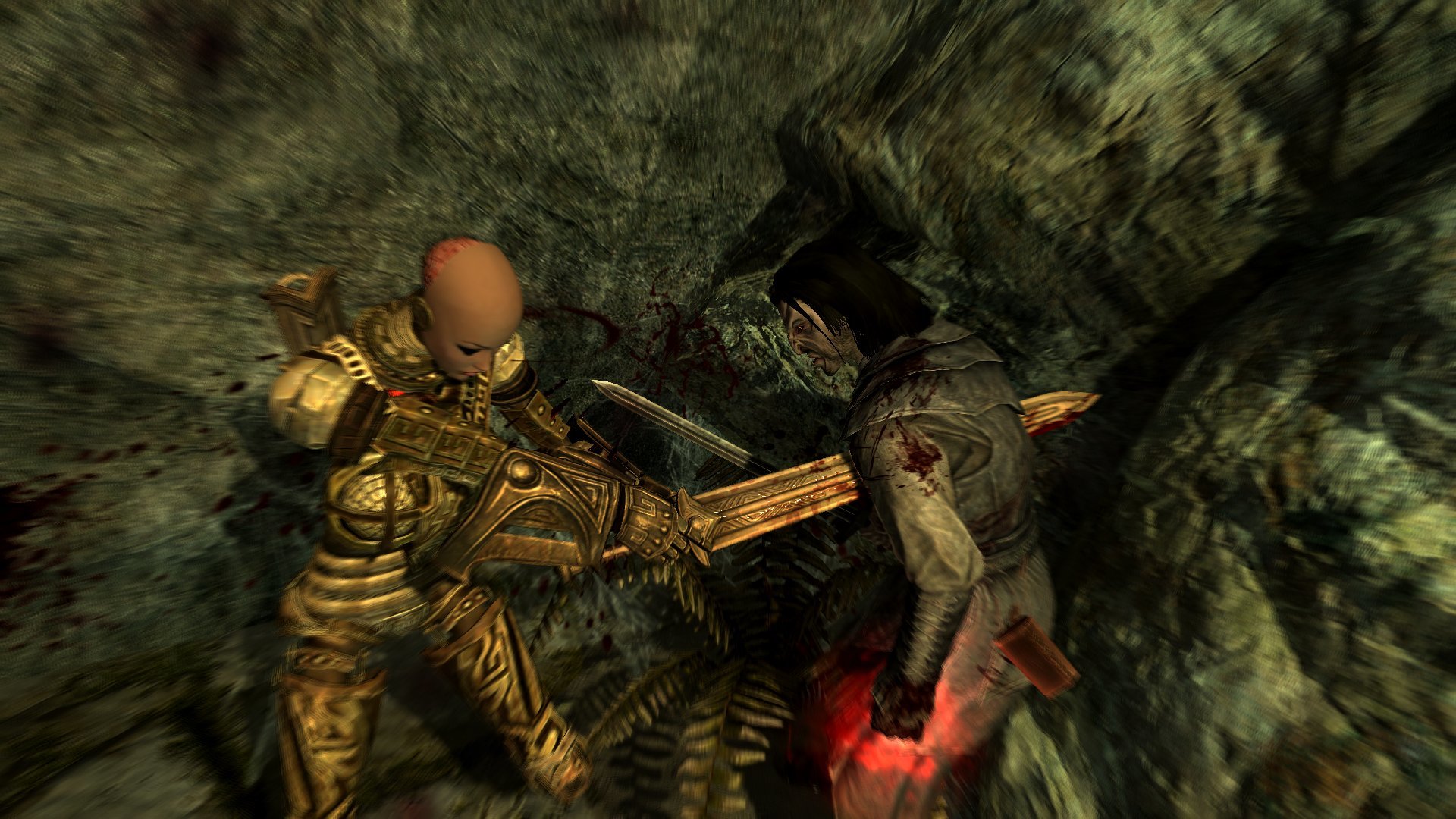 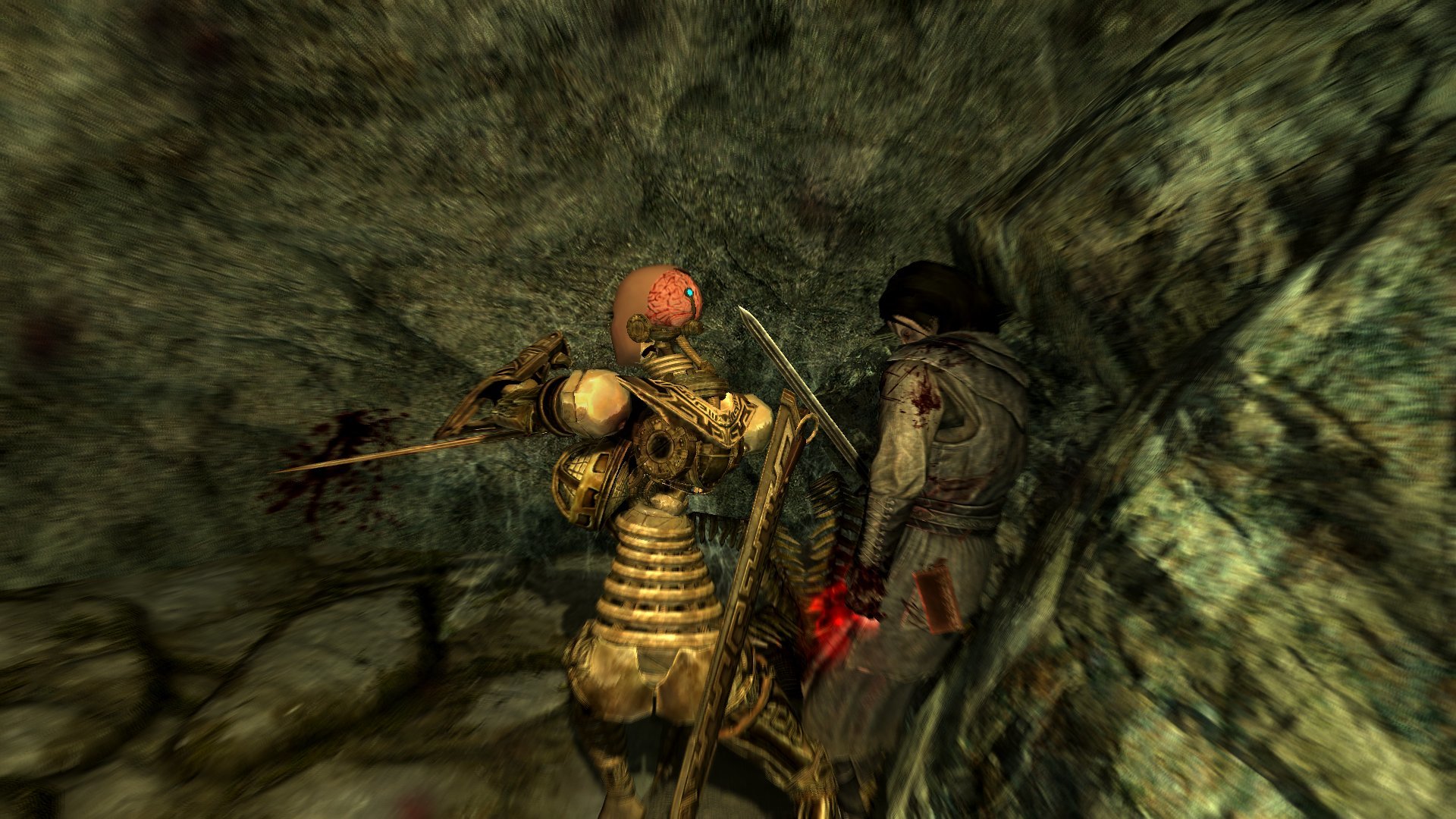 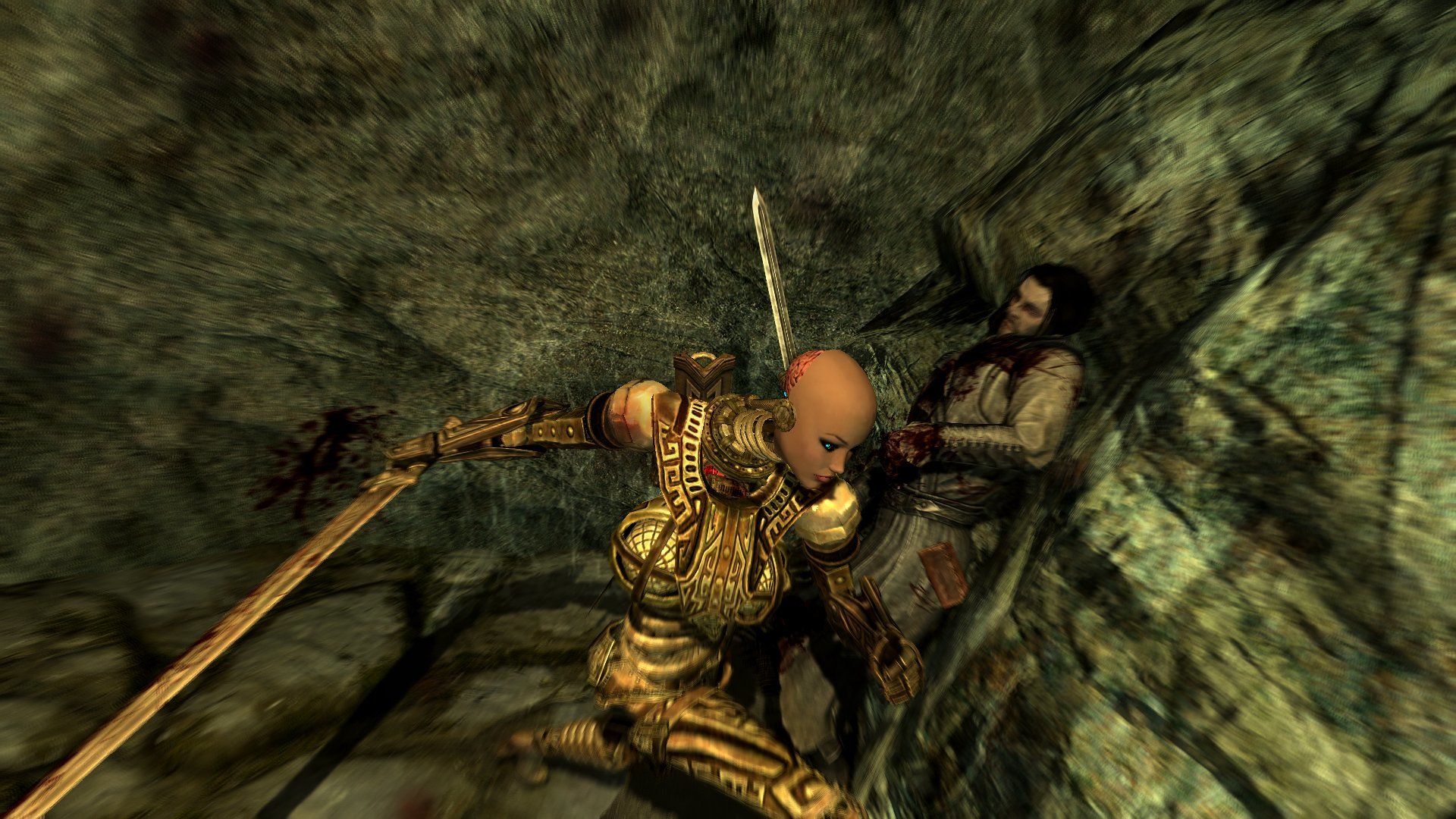 First off, I should mention that one of the reasons I got sold on working on this after putting out the Cyborg -BAF- stuff was its body-agnosticism. As a UUNP body-based mod, one of the main questions I get regarding the DCC is if I'm ever going to do a CBBE version. In fact, if you type 'dwarven cyborg' into Google, 'dwarven cyborg collection cbbe' is one of the top suggested searches.

A CBBE version is still on my 'to do' list, but I honestly am not looking forward at all to the work involved so it's never been particularly high on it. 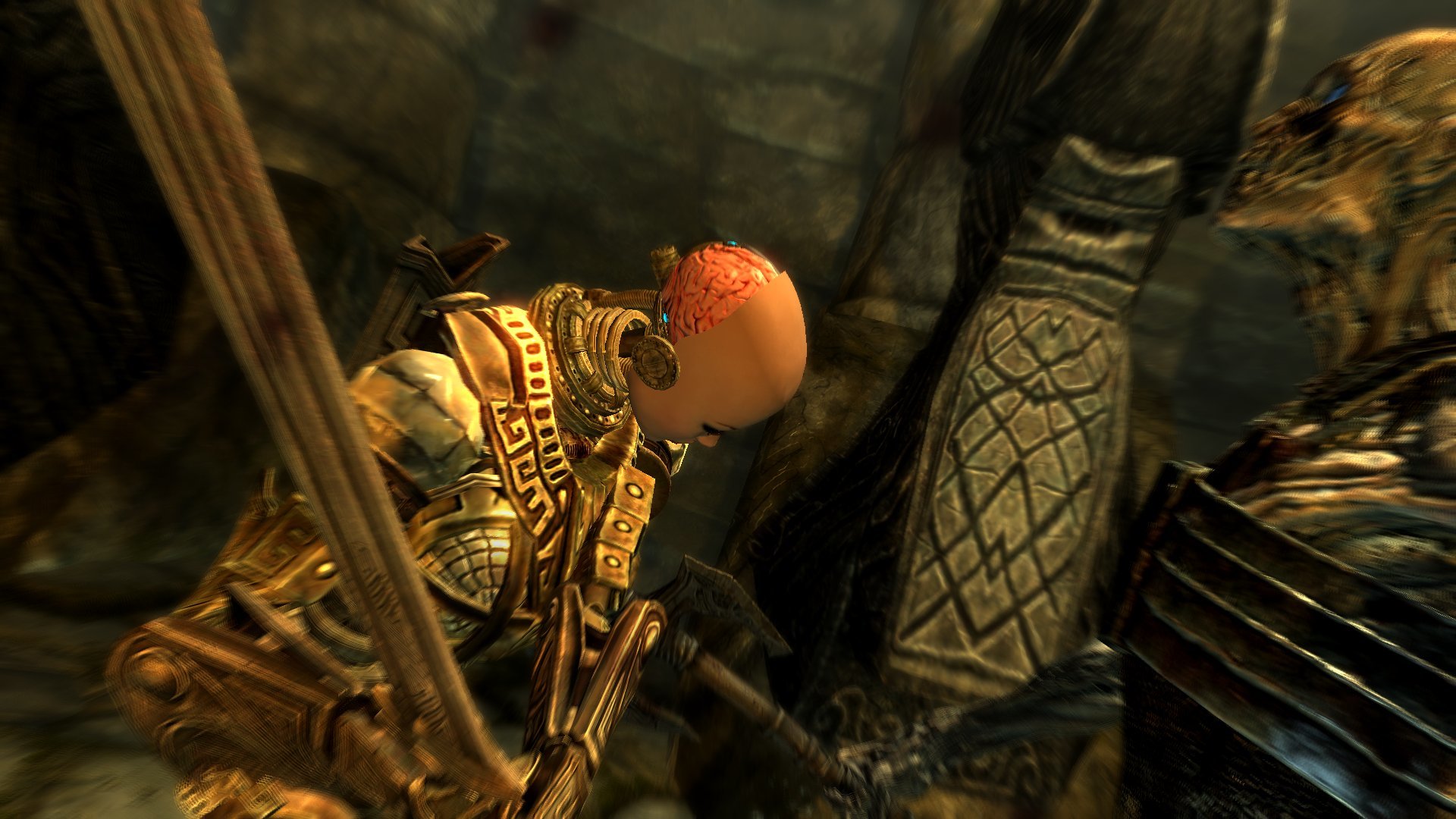 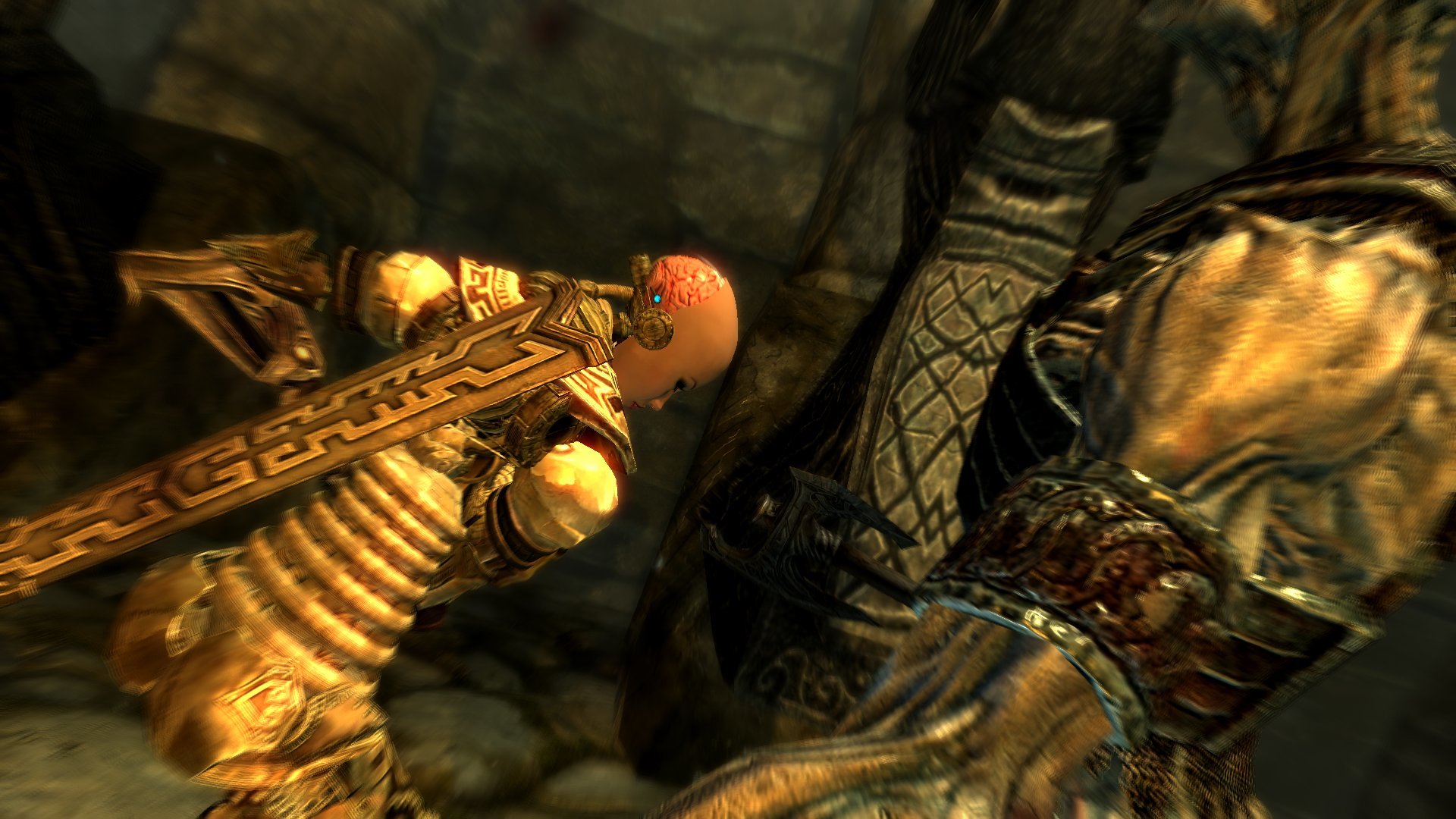 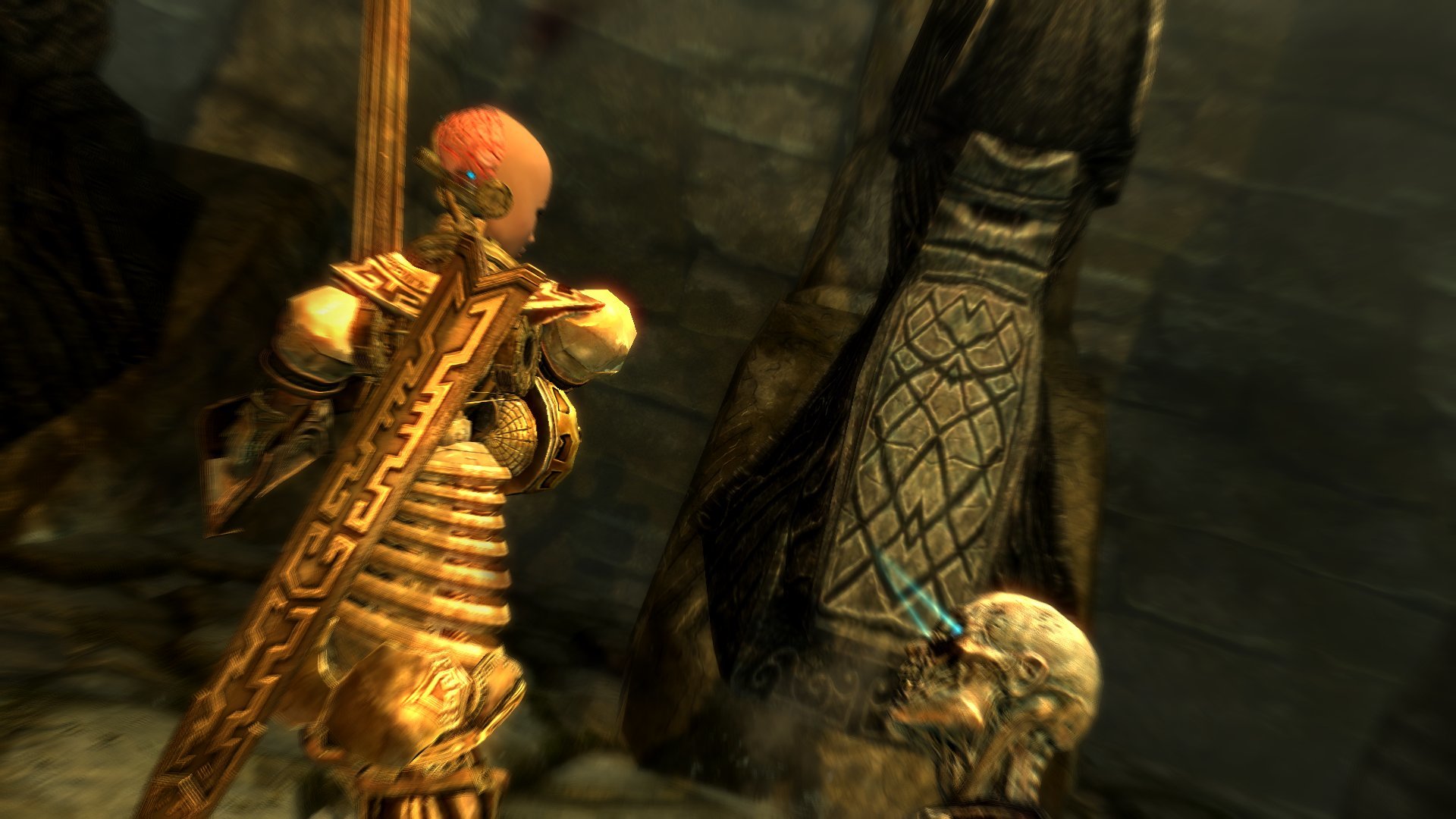 The golden thing about the 'wholly robotic' body concept has always been that, as a full-body replacement, it genuinely does not matter squat which body type you're using for general play. You won't be seeing any of it while you have this stuff equipped. That's made building these much simpler, in a way. No worrying about fitment or clipping or bodymorphs or anything, because none of them apply. Just put together the mesh and done. 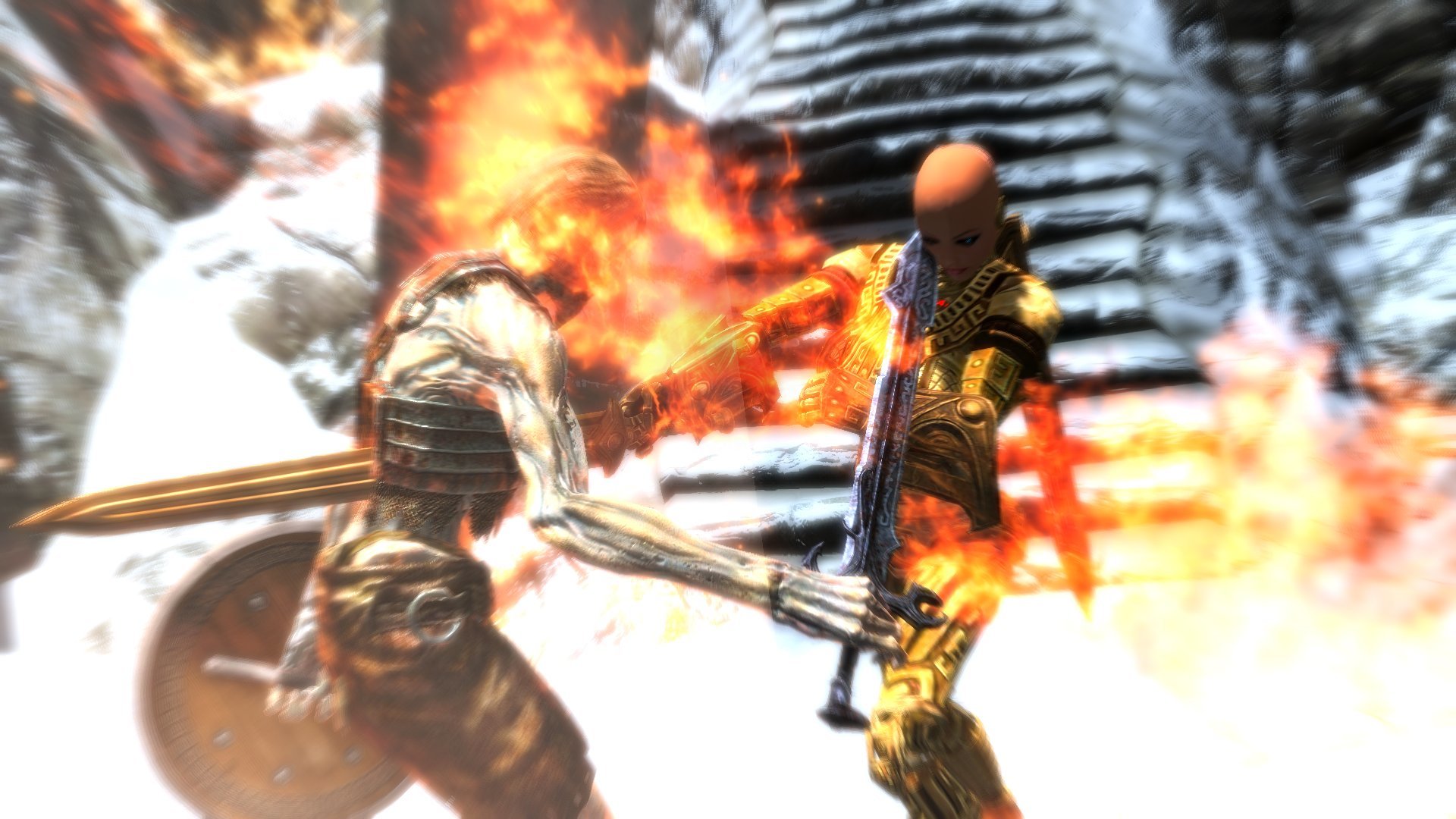 And all that should also help with one of the other incessant, site-wide requests that everyone who's built a mod for Oldrim in the last couple of years has seen; Yes, I do intend for there to be a Special Edition version of this. 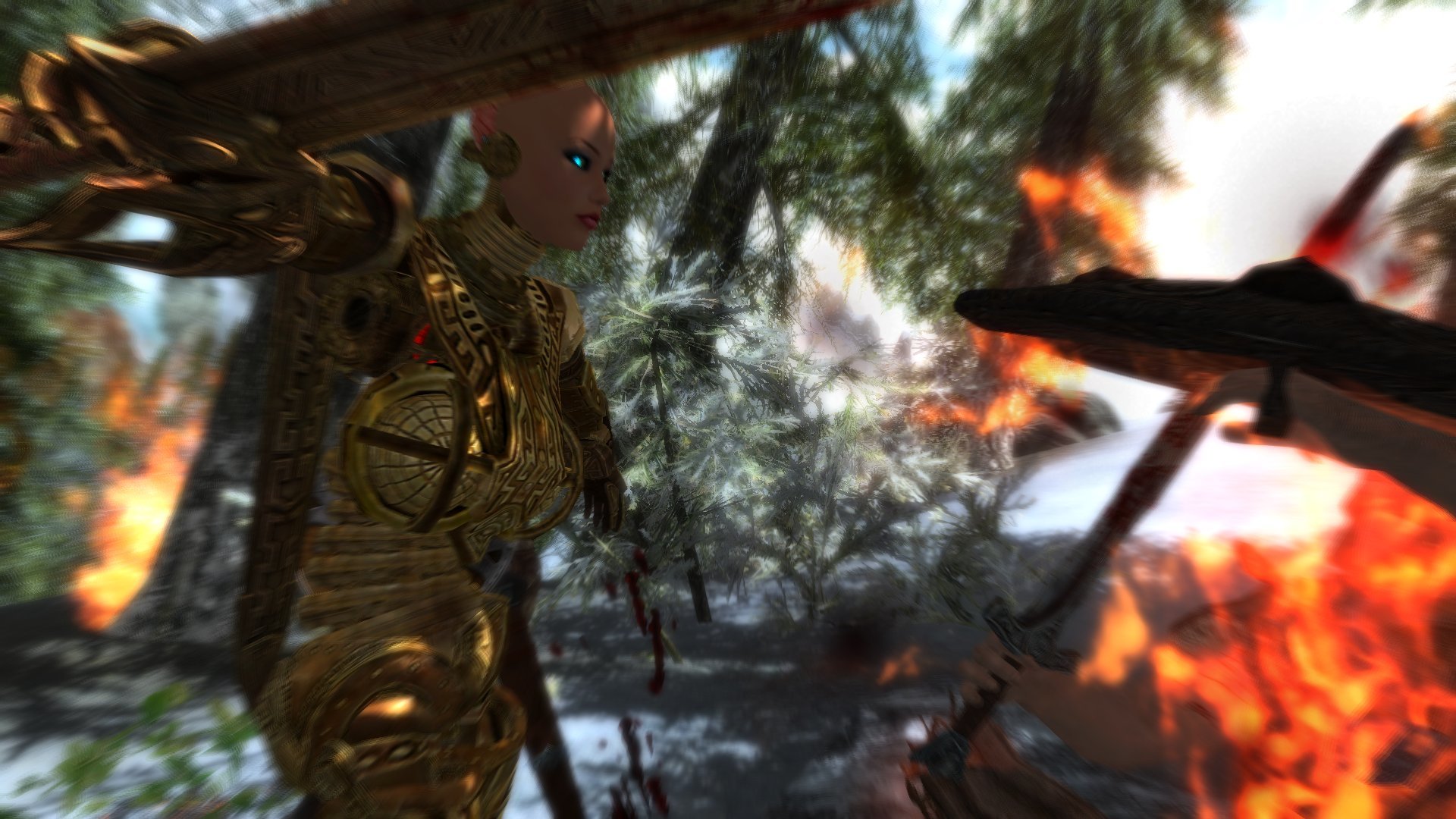 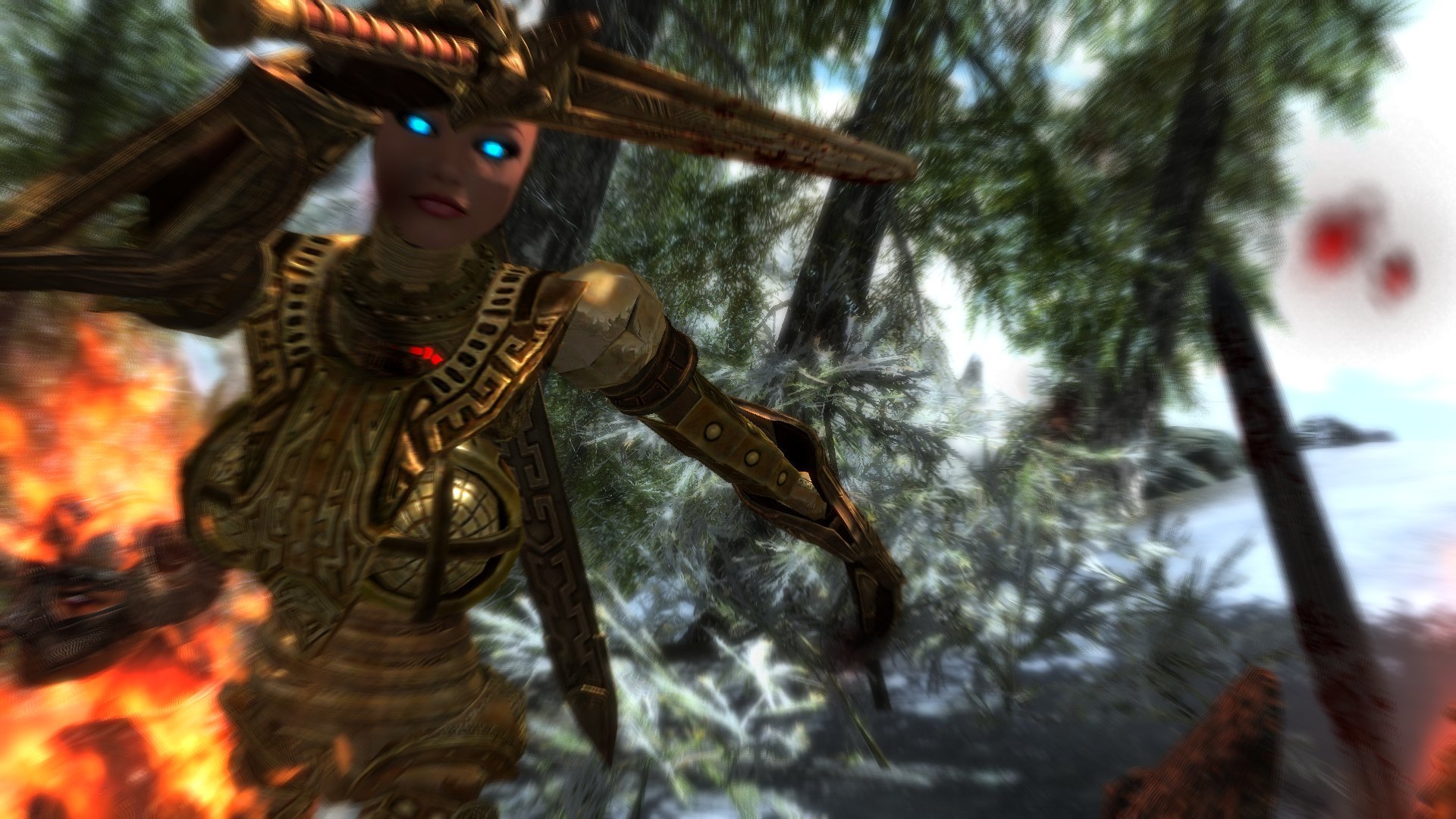 It will not, however, be published concurrent with the Oldrim version. I had considered doing so, but felt that I ought to get some version of the mod out without too many further delays. It has been around six months since I first mentioned working on this, after all. And the main source of that delay is that making the conversion requires me to actually set up Skyrim SE. It is technically installed on this computer, and has been since I upgraded to this PC about a year ago, but I've never played a single minute of it on here. Even on the old computer I only played a few hours of it right after it came out, before deciding it wasn't worth bothering with until the mod ecosystem matured. And honestly, I'm still not sure that it's there yet, although Display Model SE will make for a compelling argument when it comes out. But as a result of all that, I have exactly zero experience or practice with converting mods to SE. I know there's tools for it out there, and from what I've seen about them in discussions it sounds like this will be an easy conversion, consisting as it does of nothing but .nif files, but I'm going to need to figure out what I need to get to get SE running up to snuff as well as figure out the conversion tools before I can actually get this changed over myself, which is going to be a whole project in and of itself. 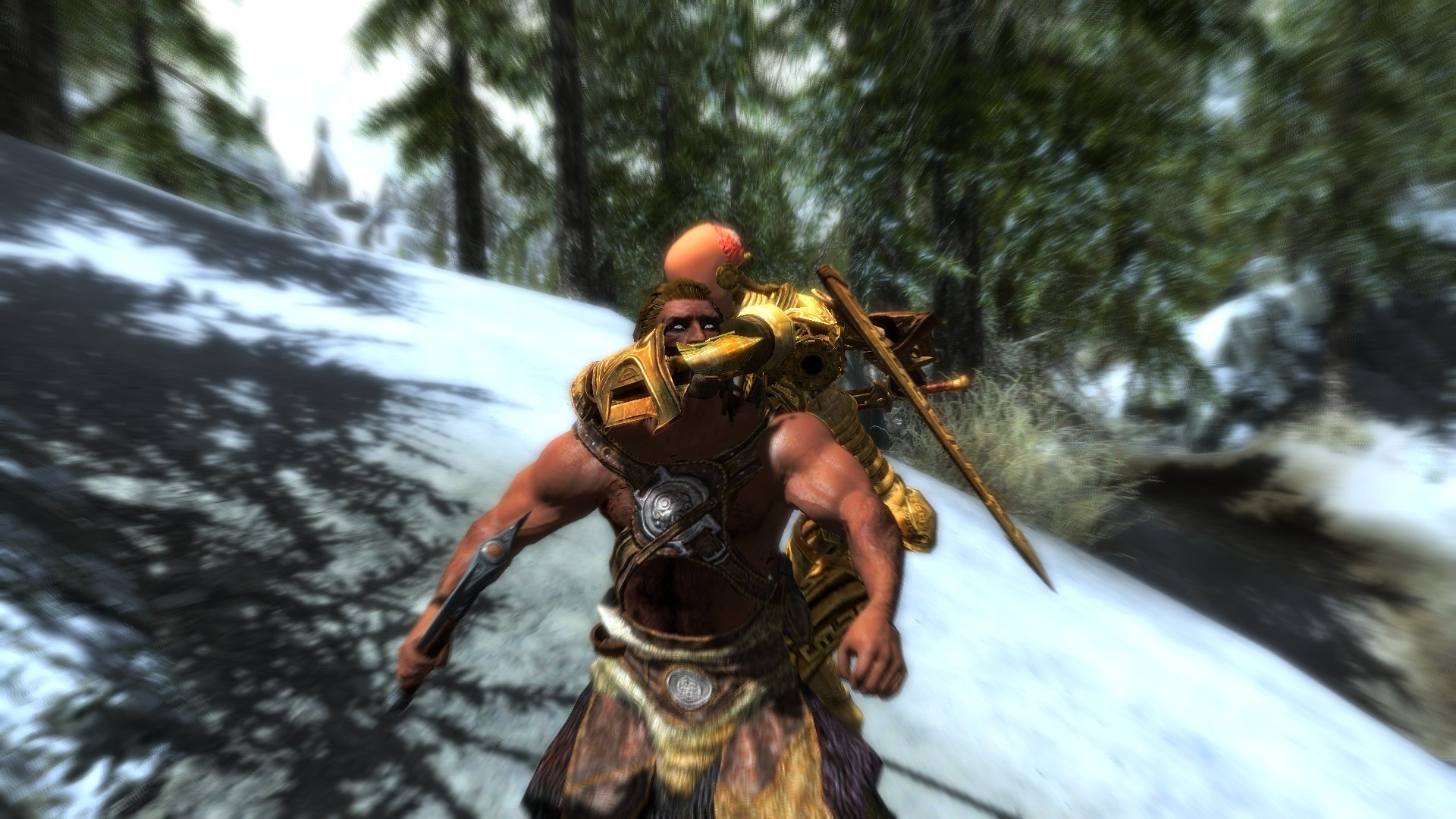 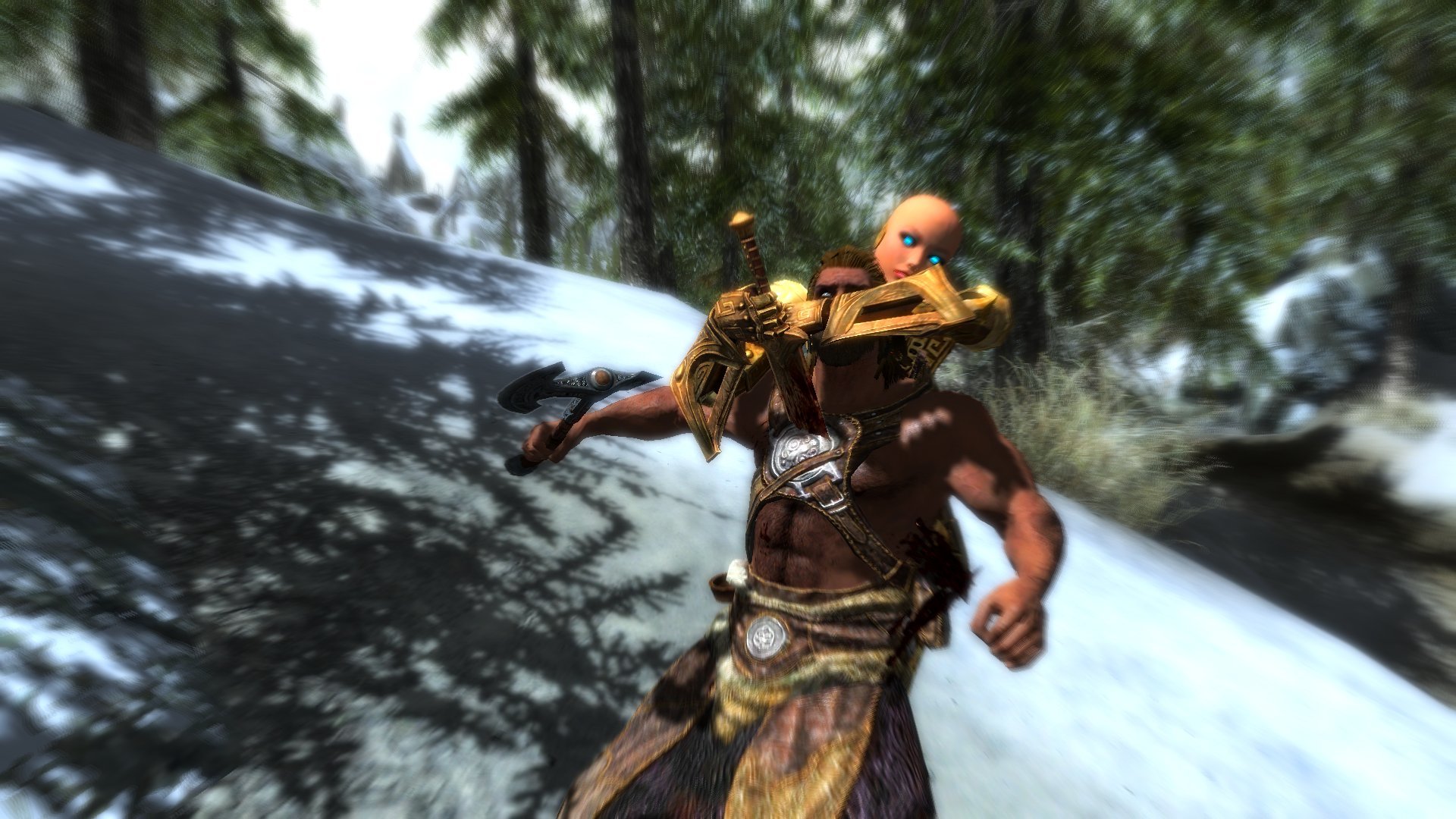 Part of the whole 'figuring out what I need for SE' process might have an effect on what I do with the DCC, though. I do know some people have converted that to work with UUNP SE, but the last I'd heard that bodytype wasn't properly supported by the whole Bodyslide dev team, although I also haven't paid much attention to SE-related issues in ages so I don't know if that's still the case. What I have seen seems to imply that CBBE SE is still considered the 'standard', though, so I was figuring I might as well go with that when I get SE running. But as a result of that I've been thinking that I might skip trying to do an Oldrim CBBE conversion of the DCC sets and only do a CBBE SE version. It's already going to be enough of a pain in the ass that I really don't want to have to do it twice over. I'm not going to actually decide on that until I get SE running and have a better idea of what its state of play is, though, so any input as far as that goes would be appreciated. 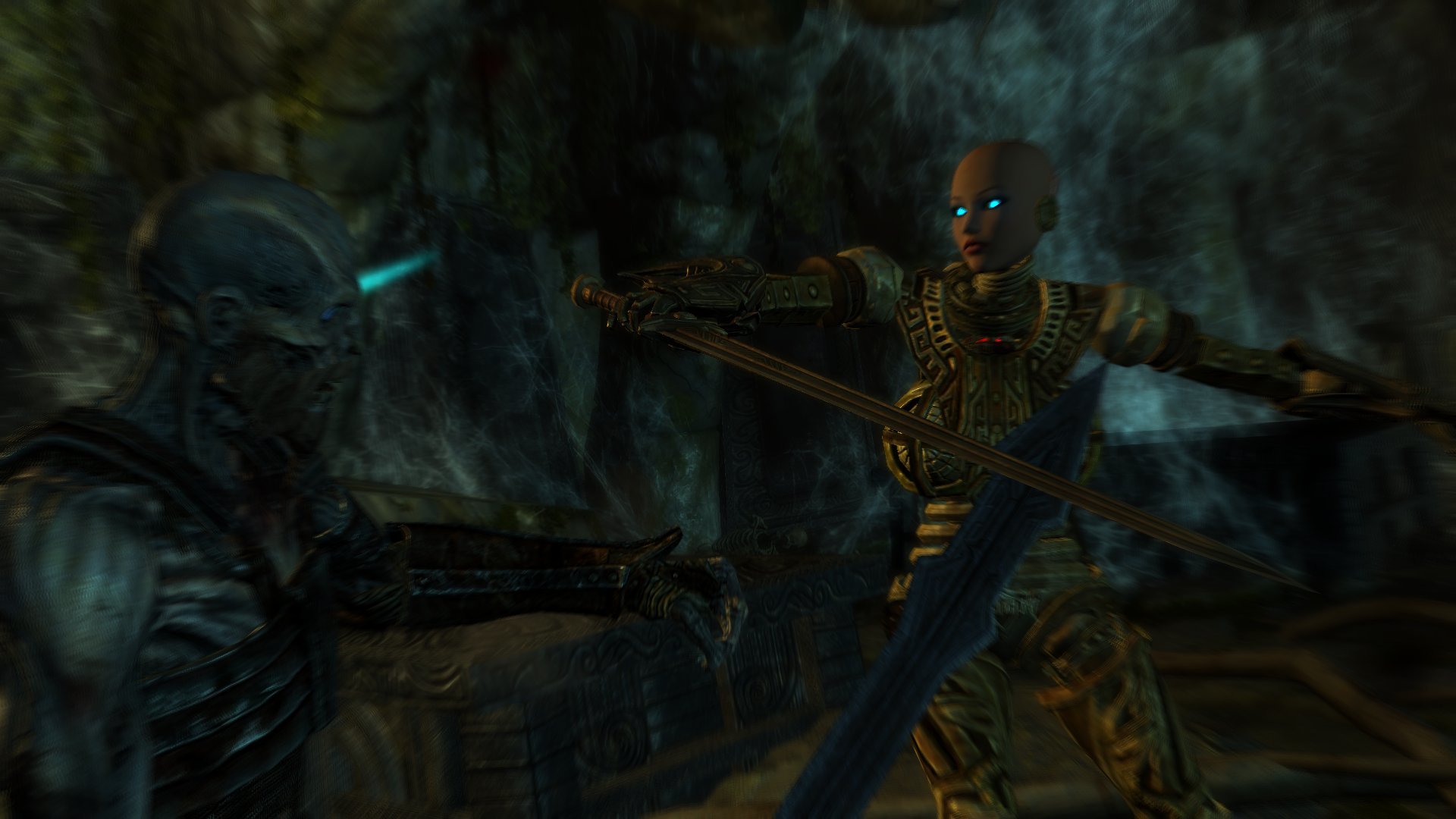 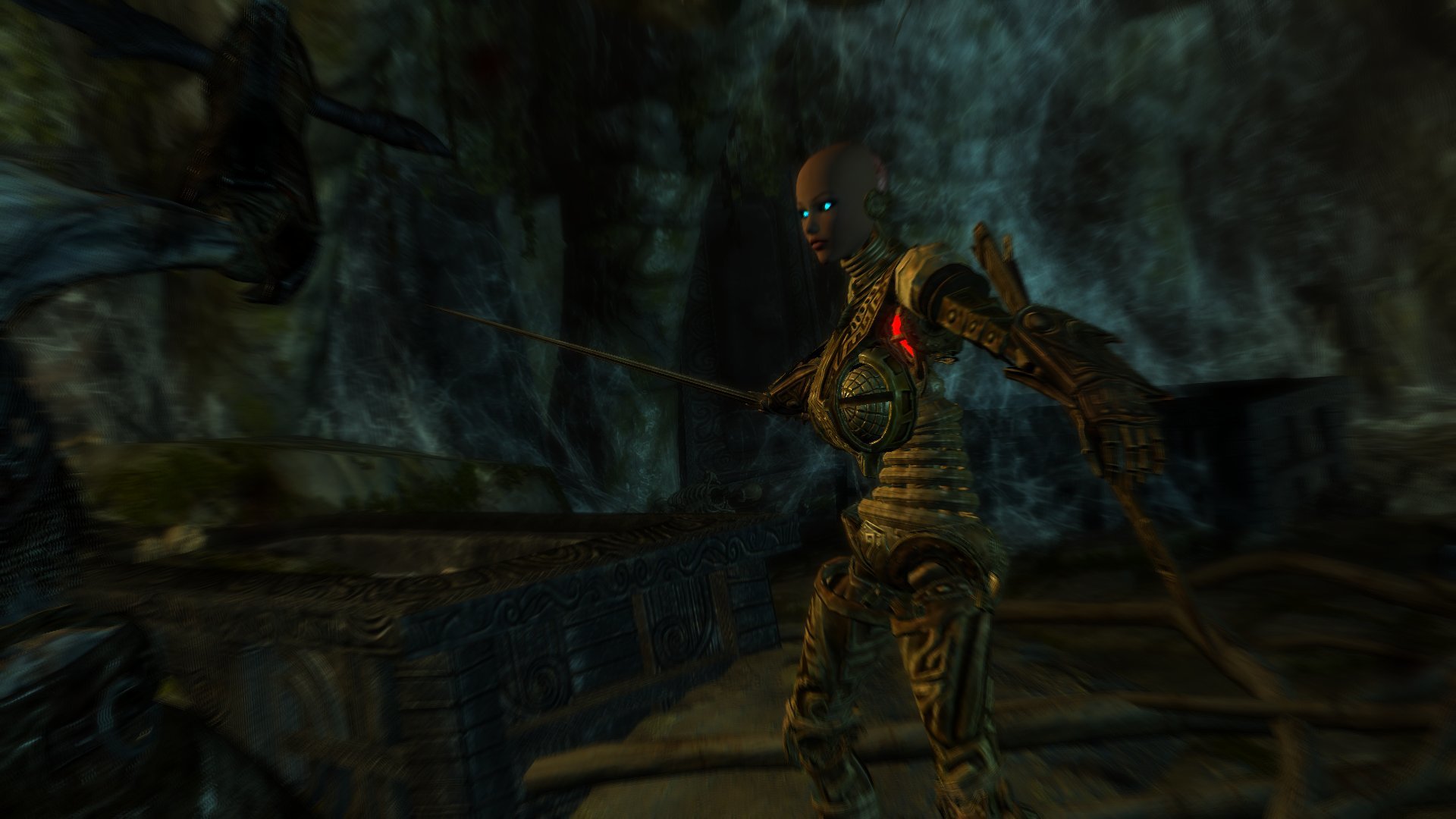 (I'm also intending on doing much the same 'let's get this actually running' process for Fallout 4 once I get this mod published, although in its case I stopped playing it a couple years ago because it was incredibly boring and am hoping that the mod ecosystem has gotten to the point where it can add some spice to the game. That seems like it's going to be even more of A Project, though, since a quick glance over its pages here on LL makes it look like there was some sort of a... drama, maybe? regarding the sex animation systems, and I seriously have no idea what's been going on in there while I haven't been paying attention. So that'll be fun to work out.) 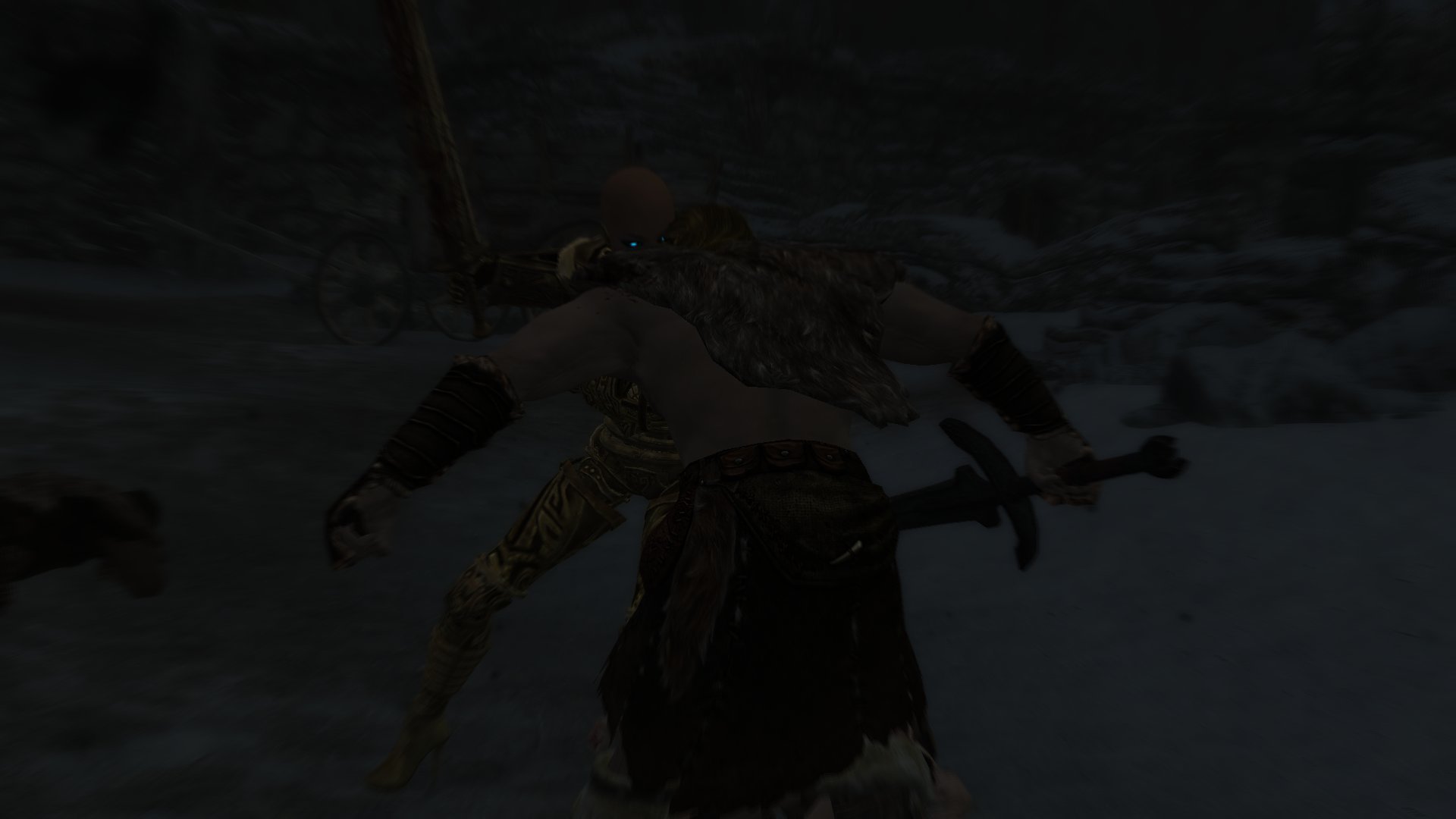 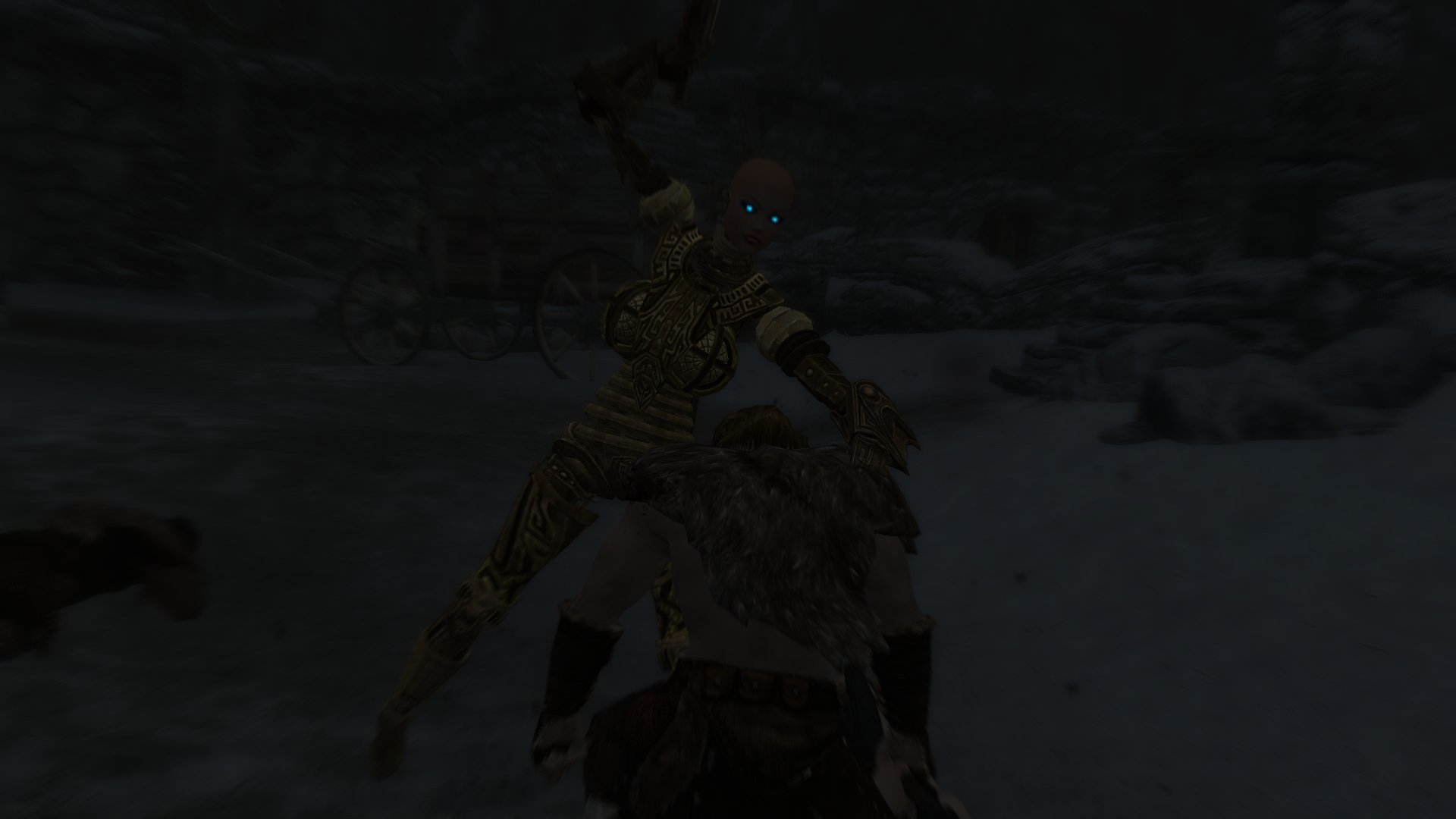 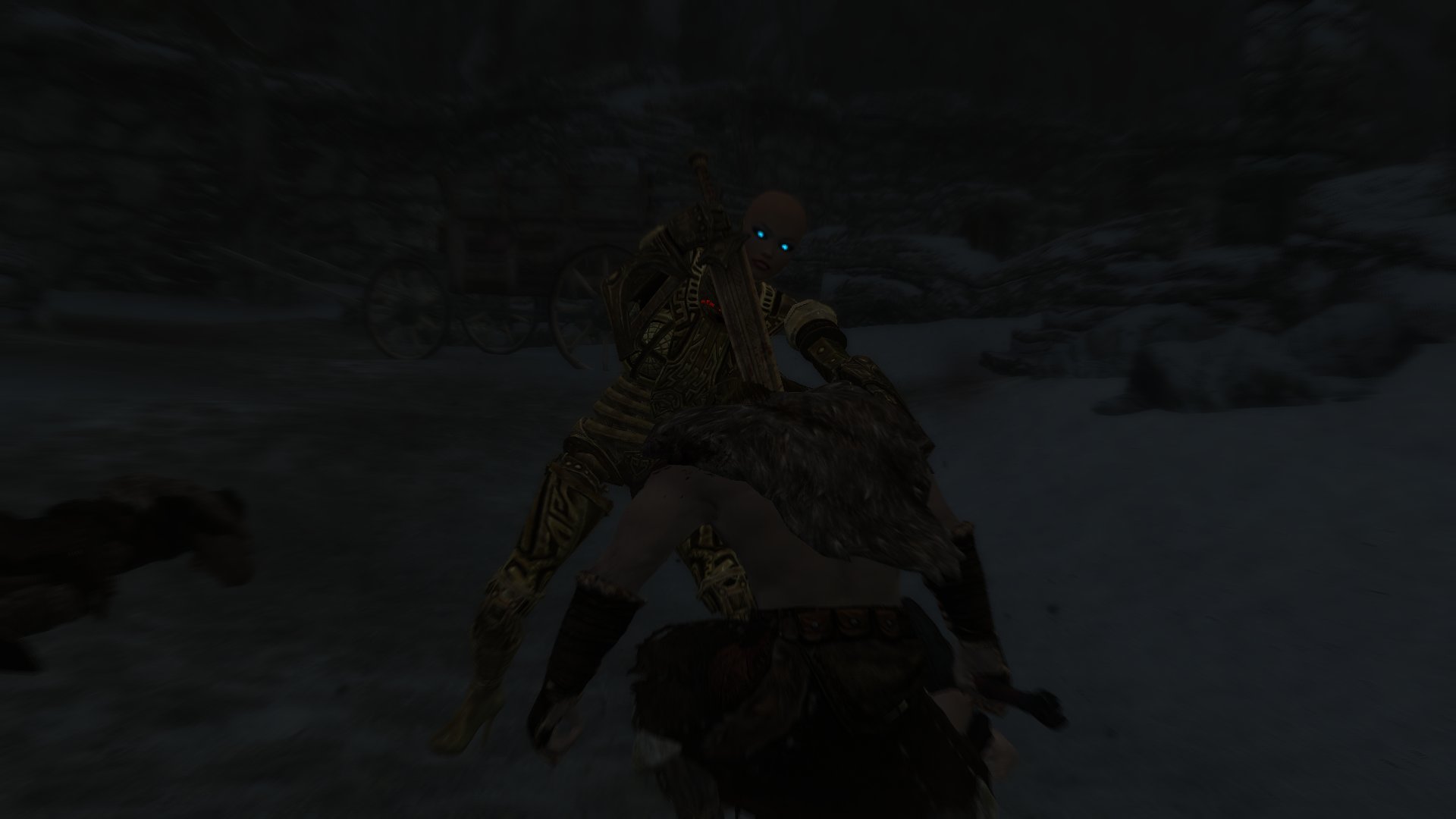 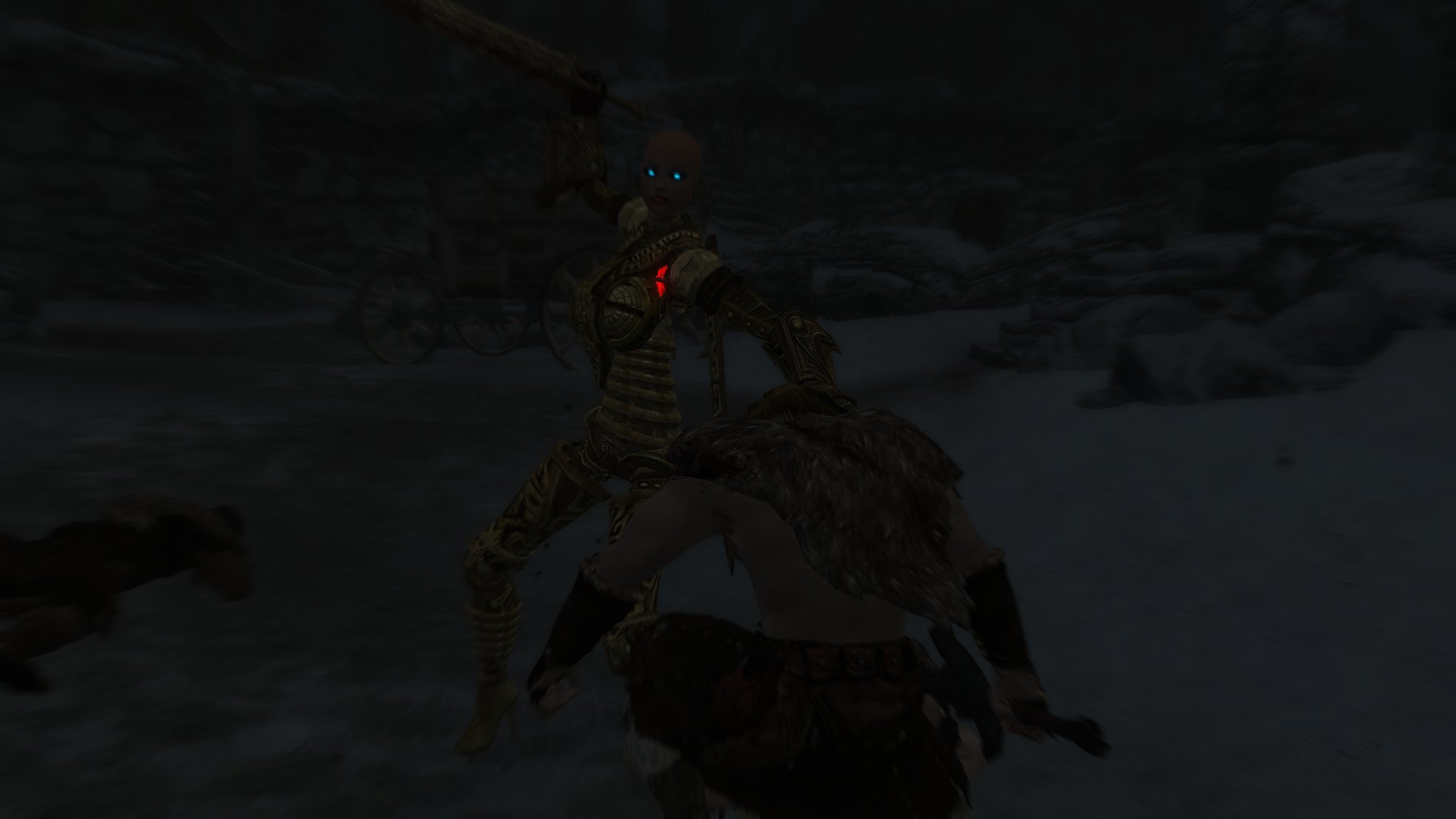 I should probably also address the third most common question I've gotten on the DCC while I'm at it, and say that no, there is not male support for the Modular Automatons, either. That said, it could conceivably be easier to do it for the Automatons than it would for the DCC. The biggest problem with doing male versions for the DCC is that it's entirely centered around Bodyslide and built in Outfit Studio, and that program suite has shit all for male model support as far as I'm aware. So building the models and especially building weight slider support for the models is well outside of my skillset, which is exactly where I got roadblocked on my exploration of the idea early on in the DCC development. The Automatons don't have to worry about building weight support into the bodies, but it's still a concern for any potential male model because the variance between the 0 and 100 weight necks on the male heads is considerably more extreme than it is on the female heads, which would make building a neckplate element for them a bit more tricky. And then there's the second biggest problem with doing male versions, which is that all of my source cyborg body parts were designed for females from the start. Just as with the DCC, I'd pretty much need to build all-new male-use parts for everything. Again, that's considerably easier to do for the Automatons than it would be on the DCC, but it runs right into the third biggest problem, which is that I don't have a lot of interest in doing that myself. So I won't say it can't ever be done, but I will say that holding your breath waiting for it could be considered a form of suicide. 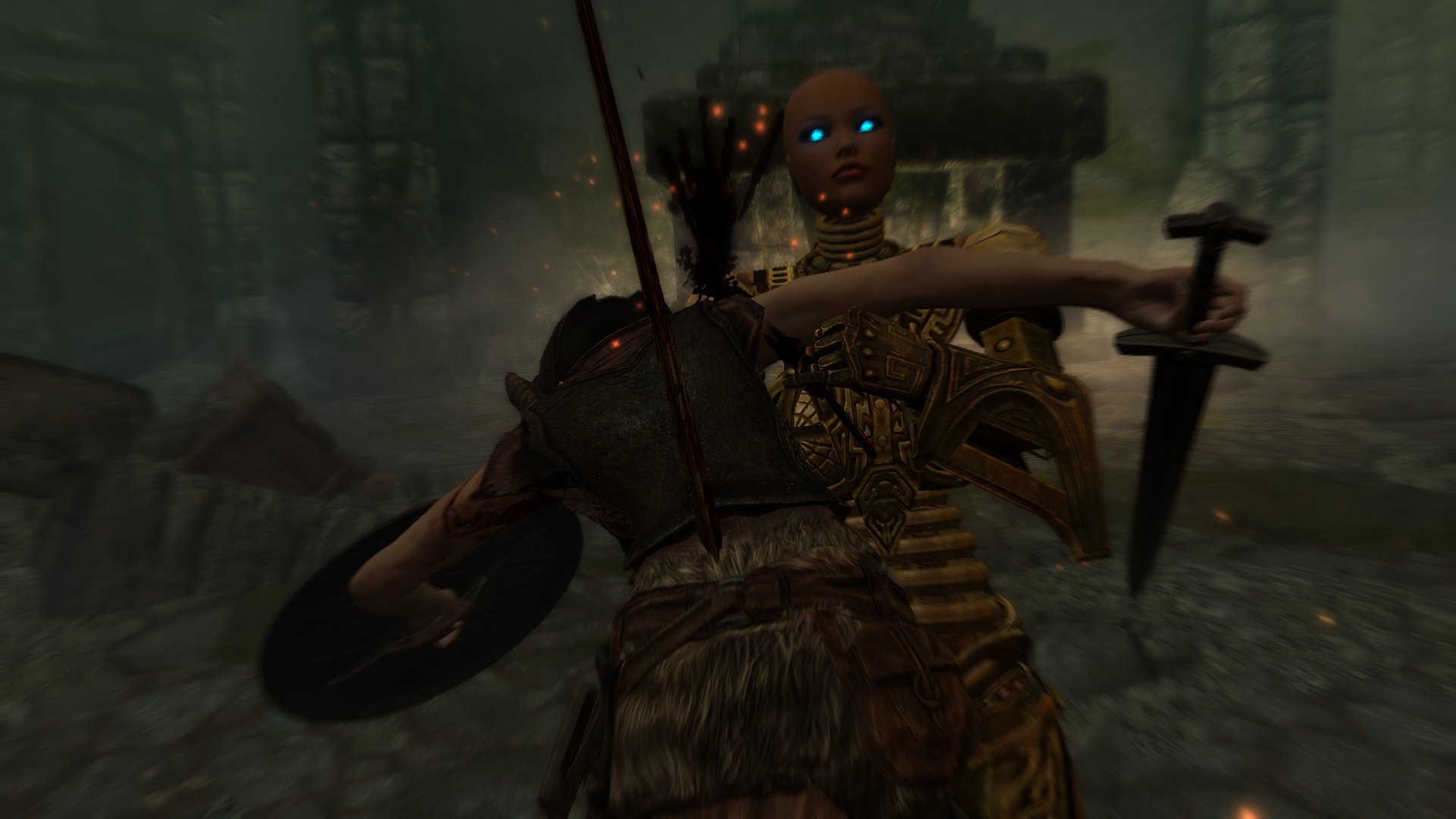 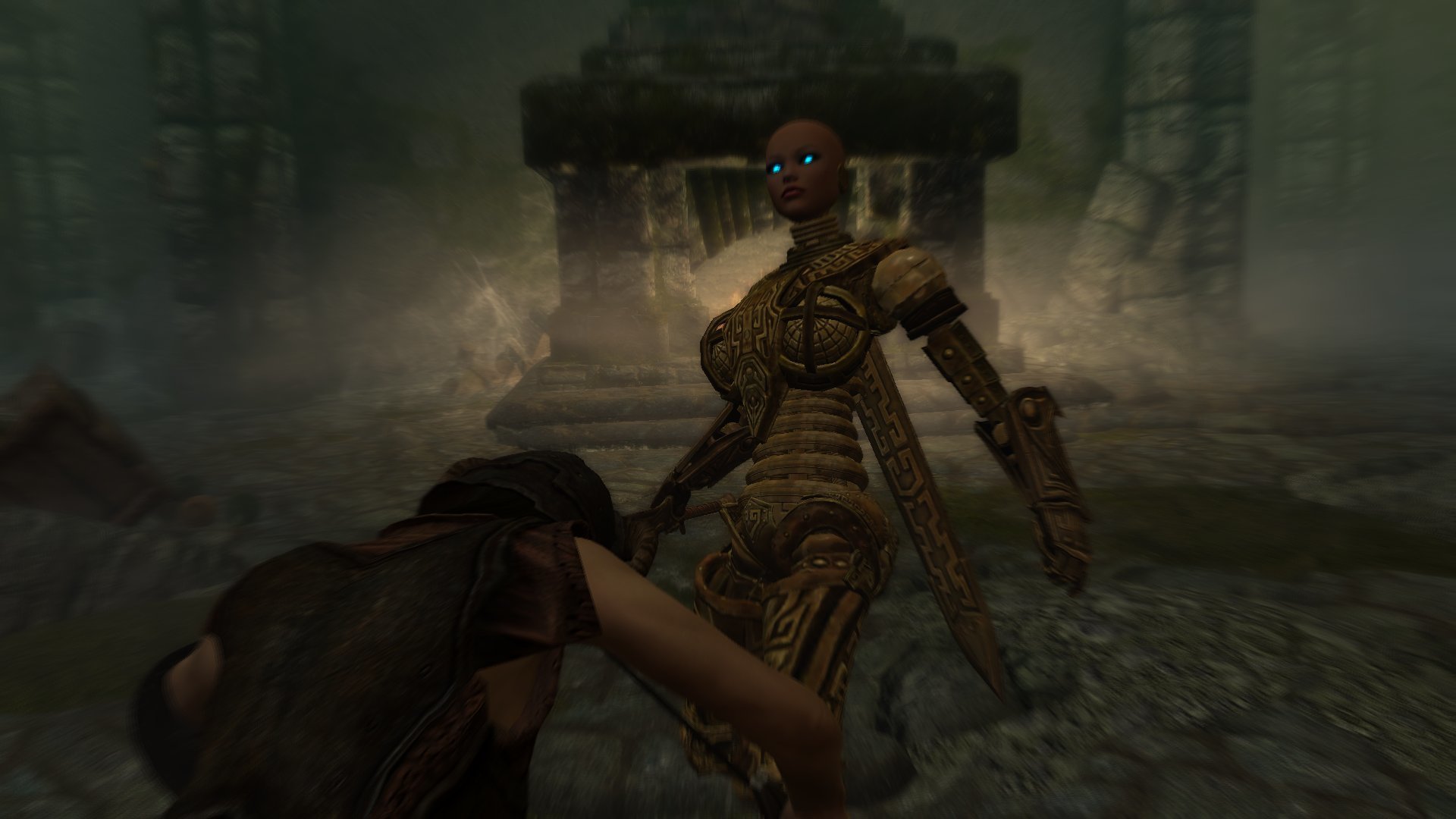 I also have a couple questions in my mind about exactly how I'm going to release this Automaton mod. Obviously I'll have it here on LL, if the site manages to stop getting machinegunned long enough for it to get through, but I'm also pretty seriously considering putting it up on Nexus. I haven't bothered doing that with my previous work mainly because Nexus seems like kind of a pain to deal with, honestly. I had intended to do it with the bikinis, but then just never got around to it. But given LL's recent issues having an alternate release point has gotten more appealing, and looking at the endless lines of character presets and sexy followers on Nexus' recent files page makes me think that it could use something to stir it up a bit. I need to double-check that all my sources are kosher over there first, though... Which is a big reason why I haven't bothered with the previous stuff. I've got a pretty low tolerance for hassle. 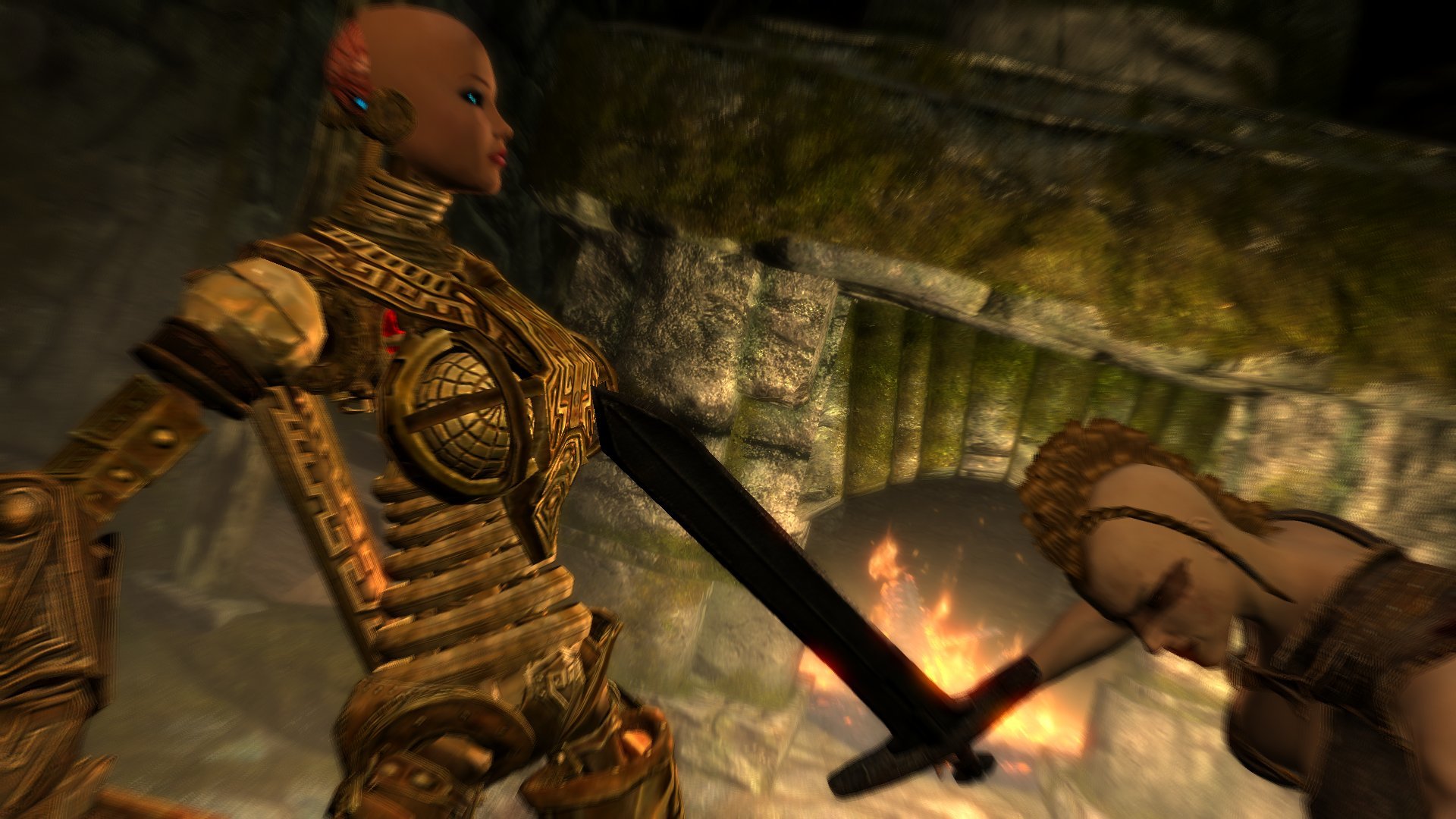 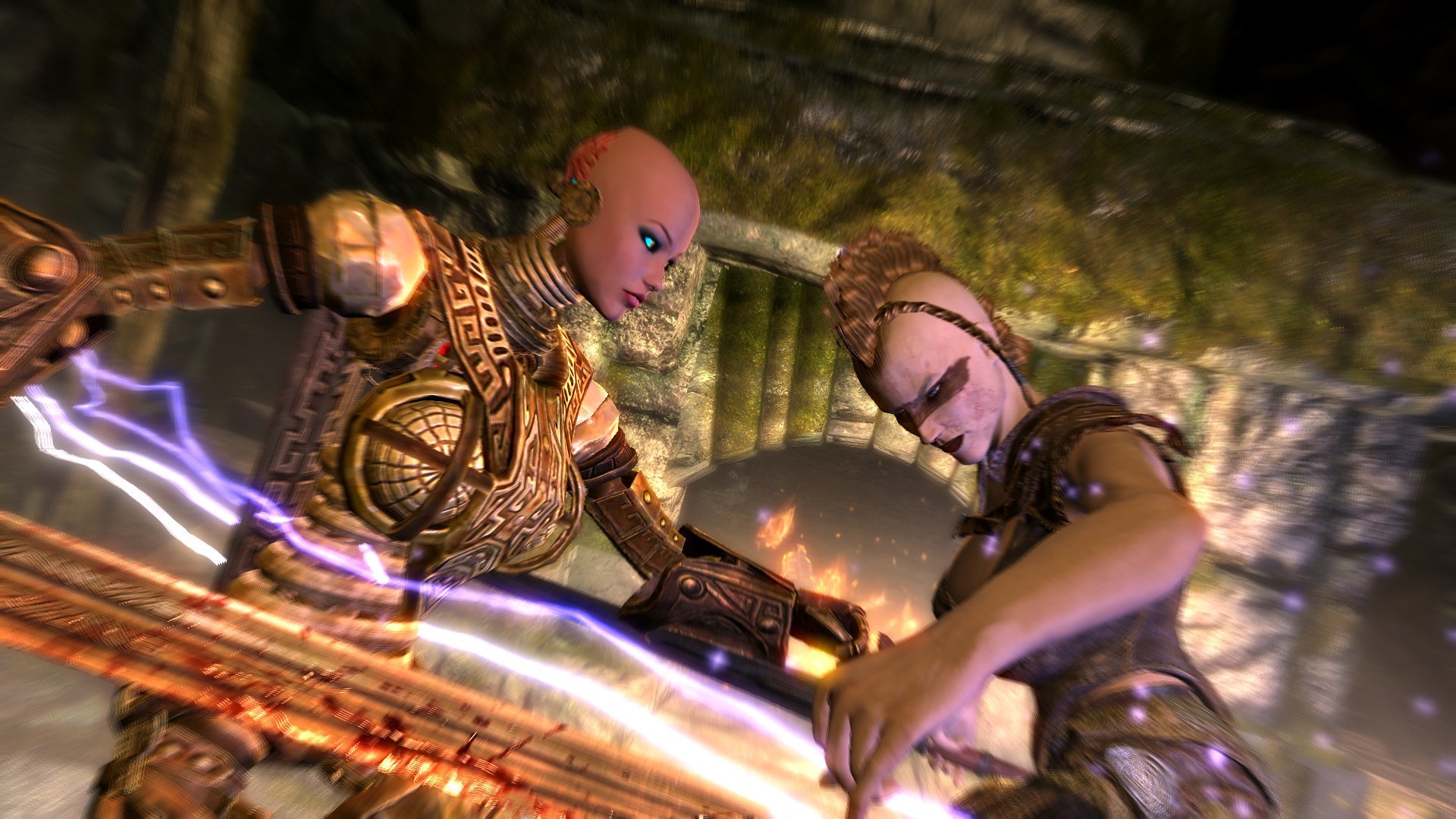 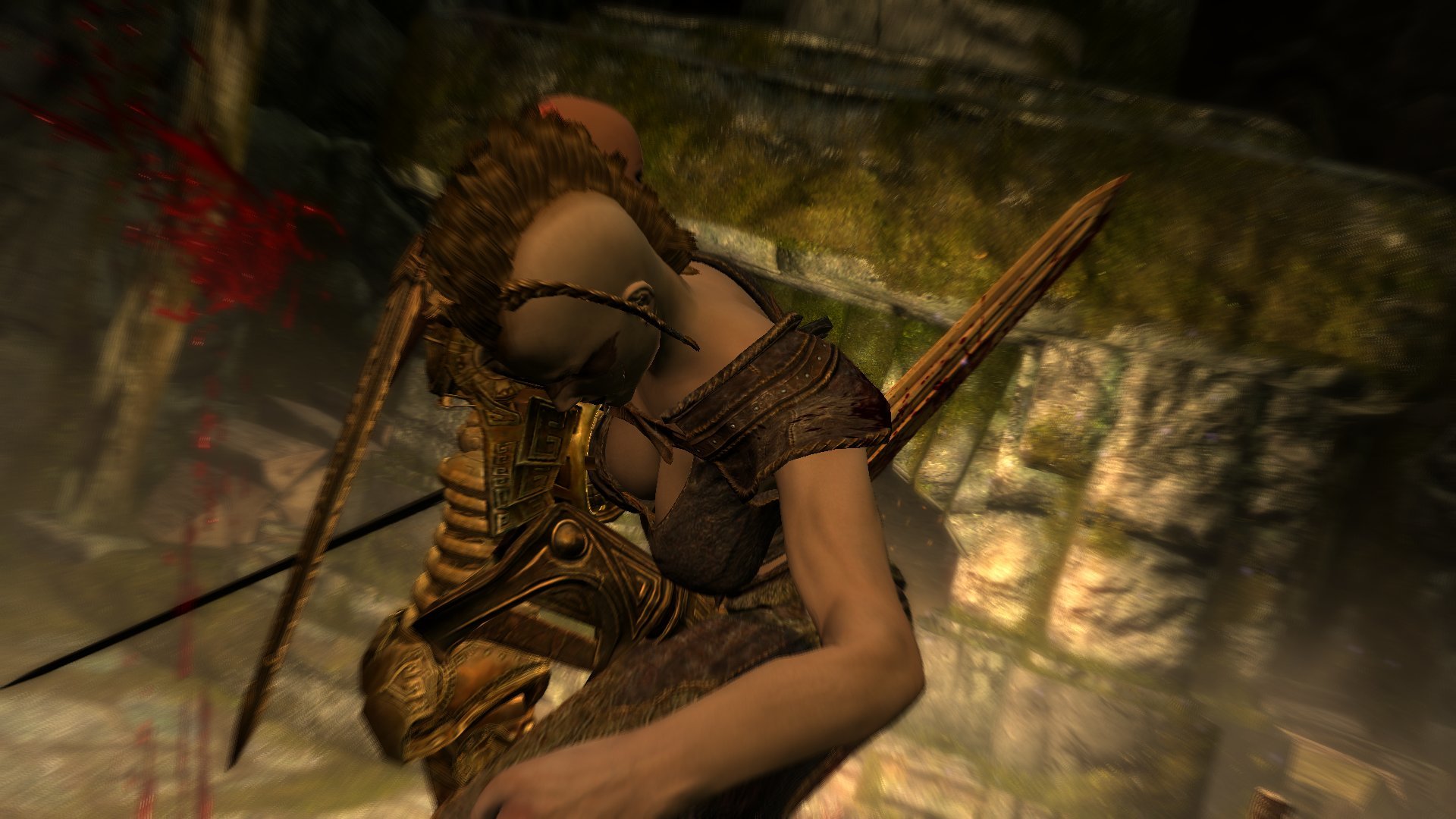 Putting that aside, I've still need to figure out exactly how I'm going to release this here on LL. The thing is, this... This really isn't an 'adult' mod anymore, is it? I mean, I guess it technically still has robot nudity, since there's a couple of armorless versions of the upper torsos, but I'm not sure that counts. There's certainly some stuff that's pretty suggestive, but there's nothing that would really count as 'explicit' in here, I don't think. I did have some vague plans for stuff that might have, but I never could get a bare torso model that'd fit quite right, and the whole 'strap-on' idea just seemed like it'd be a pain to get working, so none of it made the cut. Of course, there's nothing to say that it couldn't at some point, but... Probably not likely. So I could feasibly put this in the Non-Adult section of the site, but does anyone even look in there? Place is damn near a wasteland. Upside of that means that I'd likely be on the front page for weeks, but... 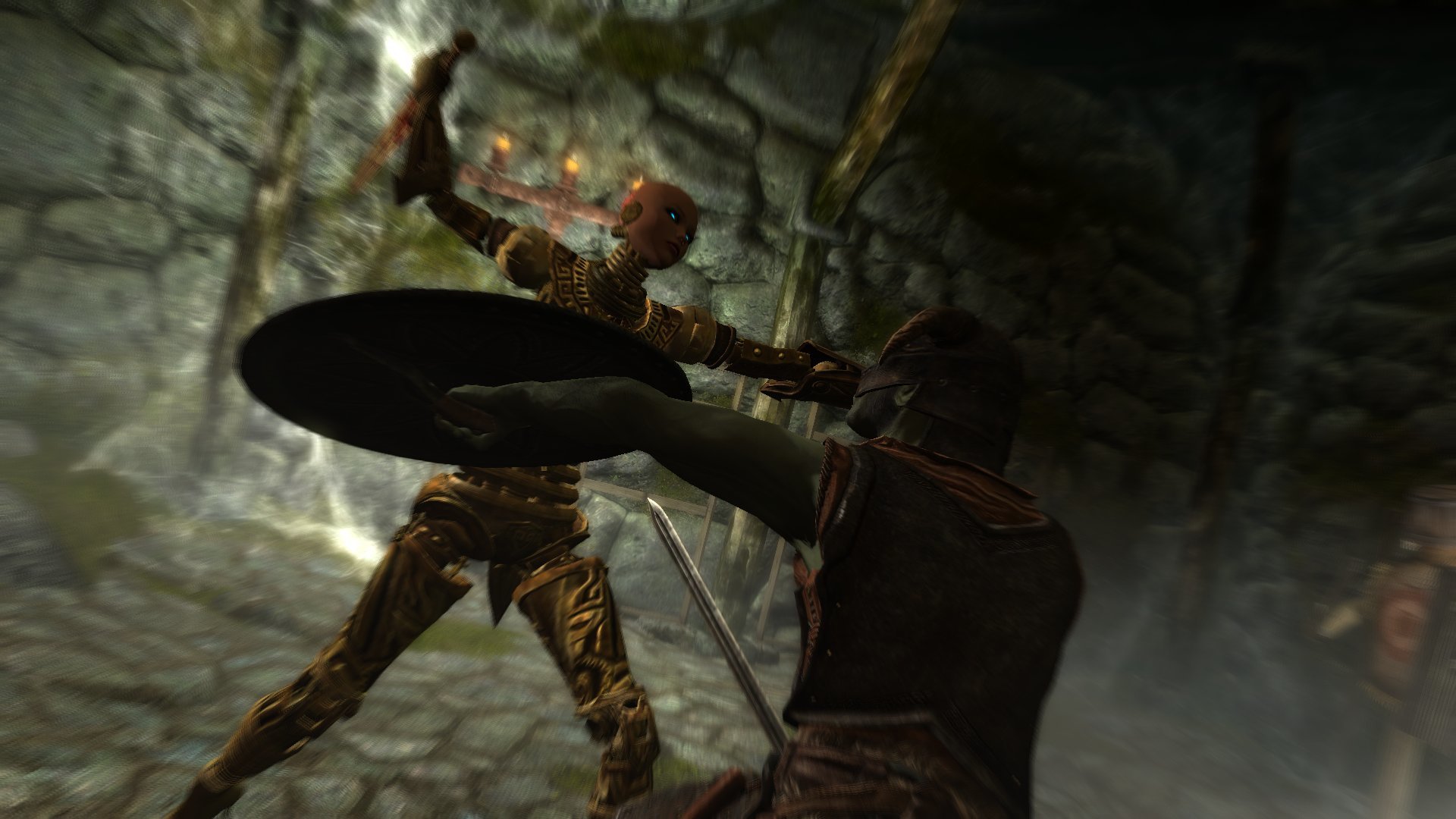 For now, I'm just gonna sleep on it. 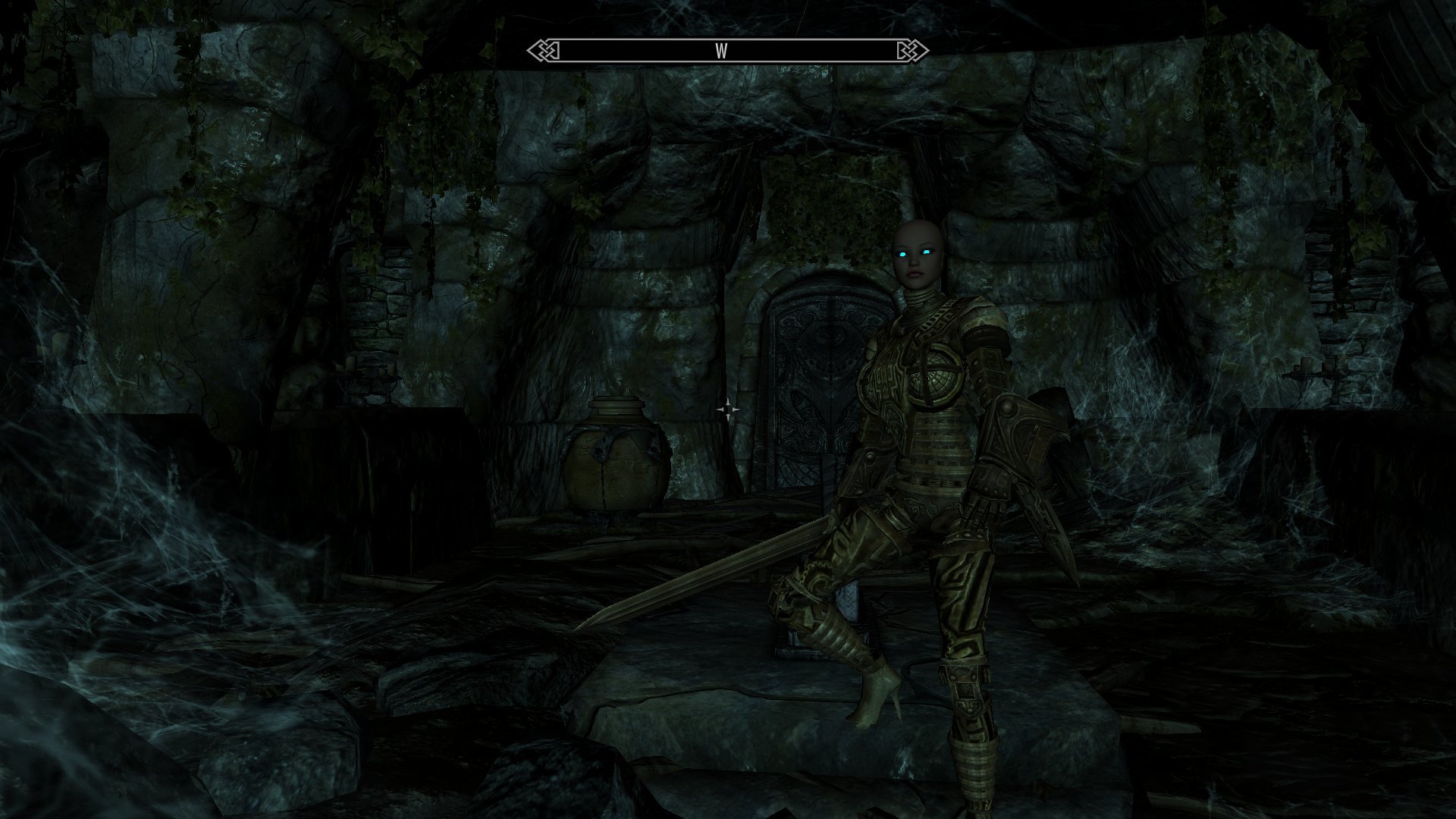