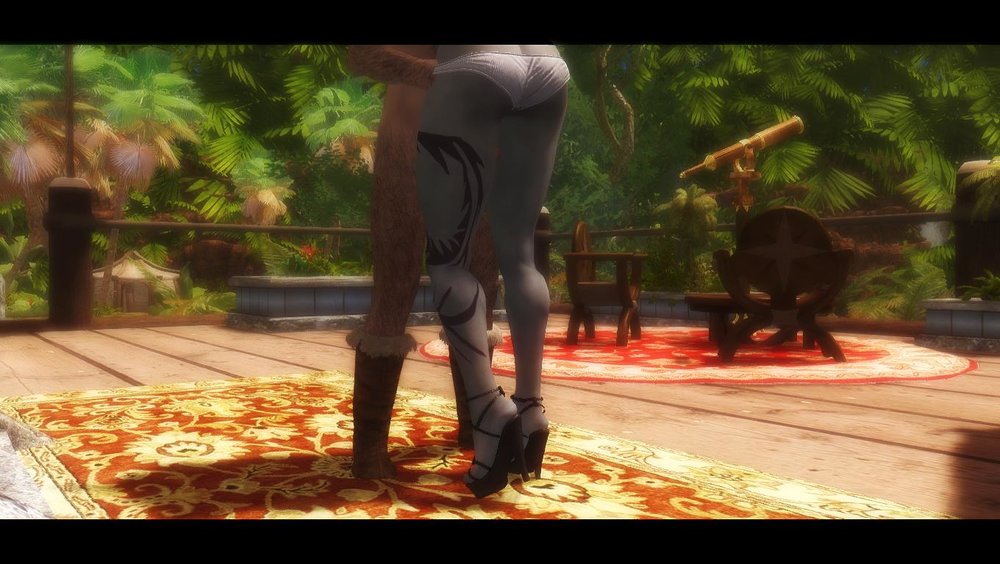 So here's a little backstory that I made for my new character Neria. She's a Dunmer, raised by Khajiits in a land called the Oasis. It's basically a narration of her story till she arrives in Skyrim, aided by pictures. Further entries will be mainly pictorial with dialogues. And yeah, it's NSFW

The Oasis was the only place in all of Tamriel that had never witnessed any act of violence and destruction, at least since the time it was properly inhabited. It was unambiguously the most peaceful location in the continent. Situated on the northern border of Cyrodil, hidden from the prying eyes of the world, Oasis was a tropical paradise with lush green trees, warm sand beaches and clear waters. Nobody knew how the Oasis came to be. It was always, just there. It was a home to the cat people of Elswyr, the Khajiits. Years ago, tired of the constant wars in their country, they had fled Elswyr in search of a safe haven. From that time onwards, the Oasis has been a home to the Khajiits. Eventually, it became a thriving community when the Khajiits reproduced and spawned future generations. The oasis, rich in natural produce, became a hub of trade. Merchants from all over Tamriel traded there. The residents of the Oasis were great hosts and it being a self-sufficient paradise, they never felt the need to venture outside of their home. In all these years, the Oasis has never been invaded by the outside world. Partly owing to its hidden location and partly because the merchants’ access to a lot of produce at very low prices as the Oasis was abundant in these exotic fruits and vegetables. Due to these reasons, the Oasis has always been left alone and never been involved in the quarrels of the foreign world. In addition to this, Oasis had absolutely zero crime. All of this made Oasis the utopia the fleeing Khajiits always wanted.

Ra’sava and his wife Sholani worked in the inn, ‘The Catfight’ over at the docks. Ra’sava played the flute there and Sholani was responsible for the cleanliness and the upkeep of the inn. Both of them were born in the Oasis and got married while they were working at the Catfight.

The story of Neria starts when Ra’sava had to go to Morrowind to visit one of his Dunmer friends, Atvir.

They had met during Atvir’s frequent travels to the Oasis to trade and gave rise to a long and unlikely friendship. Atvir’s wife was pregnant at that time and they were expecting the delivery to happen anytime in the next couple of days. Ra’sava was just admiring the view of the Red Mountain from Atvir’s house, when a number of things happened at once. Atvir’s wife went into labour and at the same time the front door burst open. It was one of the neighbours who shouted that activity has been noted around the Red Mountain. He was saying something about evacuation when Ra’sava noticed something: the green trees around the top edge of the Red Mountain were replaced by burning versions of them. They felt the ground shaking. Atvir shouted at Ra’sava to stay back with his wife and her handmaidens while he went out to warn the others. Ra’sava’s head was shaking. The shouts and screams of the residents mingled with the screams of Atvir’s wife in labour was making Ra’sava’s head spin. He tried to control himself and went over to the woman who was asking for her husband. Ra’sava assured that he will be back soon. But he never came.

A burning blob of molten lava crashed on the roof of the house and it caught fire. The women screamed and urged Atvir’s wife to push harder. The house was about to collapse when, with the help of Ra’sava, they were able to deliver Atvir’s baby: a girl. Ra’sava tried to carry the wife out of the house when he realised that she had died giving birth to her daughter and her last words were that her daughter should be called Neria, after her own mother. Ra’sava couldn’t take the smoke anymore. He picked up the baby and rushed outside. He tried to look for Atvir, but among the commotion and confusion of the fleeing dark elves, he had no choice but to run, run to his ship with the new-born baby and leave the burning Morrowind behind.

Neria grew up in the Oasis where she lived with her adoptive Khajiit parents. Although Ra’sava was a flute player he was skilled in the art of stealth and the use of daggers and basic illusion magic which he had learned during his time with Atvir. He thought it fit to pass this knowledge to Neria.

They used train for hours since the time Neria was 10 years old and within a couple of years she became even better than Ra’sava, and Atvir for that matter. She used her illusion magic to trick shopkeepers in giving her more candy. Ra’sava realised that it was probably because of her dark elf blood which made her naturally stealthy and good with illusion magic.

Neria grew up to be an attractive young woman with a fine womanly body she gained by training for hours with her father.

When she was 18 years old, Neria realised that apart from the talent she had inherited from her dark elf blood, she had other talents too: her extraordinary proficiency in bed. Over the next few months she had sexual encounters with a lot of local and foreign men where she explored her various talents. Men used to fight with each other for just the one chance to lay with her.

She was enjoying her life when tragedy struck. Ra’sava and Sholani tragically died when they were mauled by tiger when they were looking for fruits in the wilderness. Neria was left alone and without a source of income as her talents with weapons and magic were not required in these peaceful lands of the Oasis.

Now Neria had only one option left, to take up the most widespread female occupation in the Oasis: prostitution. Prostitution in the Oasis was not looked down upon as a profession as compared to other parts of the world. Apart from farming and other household jobs, there was not much to do for a female in the Oasis. Neria being the most beautiful girl in all of Oasis, soon had a long list of clients. She started with offering her body to the sailors at the docks, then started working from the Catfight.

Her popularity grew at an exponential rate as she was the only non-khajiit prostitute in all of Oasis.

Apart from residents of the Oasis, she started getting famous in the neighbouring parts for her exceptional talents in bed. During her initial years she slept with a lot of men (and women) from all over Tamriel. Soon her rates shot up and only the wealthiest of merchants could afford her.

Sometimes she caught the fancy of a Jarl passing by with them inviting her to their private chambers in their ships, where she was showered with jewels and gold for offering her services to them. She did not require her illusion magic to charm people anymore as she could very well do it with her large breasts, round buttocks, long legs and a very shapely body with a face as beautiful as a dark-elf princess. She was given the name, The Exotic Neria of Oasis and men and women from all around the area used to visit the Catfight just for her.

Despite living as a queen for 7 years, at the age of 25, she started having the urge to go out and explore the world. She listened to the fascinating stories of adventure, her clients from different parts of the world told her which made her even more eager to witness what the world had to offer. It was not as if she didn’t like what she did, she loved having sex considering the fact that it was sex which brought her so much fame and wealth. But still somewhere in the corner of heart, she knew that there was something more. Maybe she was bored of being fucked by only Khajiits and the travelling merchants and sailors. She wanted to try more, see more.

She knew she wouldn’t be able leave Oasis in plain sight as she was the reason Oasis had flourished so much in the last seven years. So one night she took a decision: she coloured her hair, changed her hairstyle for the fear of being recognised, packed a bag of essentials with her trusty daggers and silently crept out of the Catfight and headed north towards the sloping forests which led to the southern border of Skyrim.

She had enough gold to buy herself a horse and go anywhere her heart desired. She had a mind to go to the College of Winterhold where she could learn more about the illusion magic which she had almost forgotten in all these years and for a change not have furry Khajiit cocks inside of her.

She couldn’t have imagined what she would discover about herself in Skyrim.

Lelek1980 (for the Red Mountain picture)