After Niyleen had changed gear they set off again aimlessly through the Reach. Though light and comfortable, her new attire let a lot to be desired in the defense department. Nevertheless, the continued on and soon it became apparent that they were just walking for the sake of walking and with Lucari not talking to her, things had gotten rather awkward between the two ladies.

Just as Niyleen was about to apologize, Lucari turned to her and said, “Hey, I’m sorry about what happened earlier.”

“It’s alright,” Niyleen said rather relieved. “So are we cool?”

Lucari gave her a warm smile. “Cool as frostbite.” “Well then, now that that fit of awkwardness is behind us, where do you want to go Lucari?”

“Hmmm…” Lucari furrowed her bow. However almost instantly she gave Niyleen her usual smile. “Oh, I know! We can head to Markarth. They have an inn there and we may be able to help the Jarl out with anything plaguing the city.”

“I’m not too sure about that…” (Niy?) “First off I’m not being a Sabre Cat. Secondly, you don’t know Markarth. One wrong move there and they’ll haul you off to Cidhna Mine in a heartbeat.”

“Good thing we’re just good people just trying to help where ever we can,” Lucari stuck her tongue out at Niyleen and walked off. Doing a bit of backtracking the two started off toward Markarth, but were soon approached by an Orc.

“Hey there ladies. Are you in need of some protection? I can be the man in your life that can fulfill all your… desires.” He flexed his muscles. “How about it? Want to make this duo adventure into a three-way?” (Dumb mercenary…) Niyleen folded her arms and gave him a cold look. “Honestly, do we look like we need protection you foolish Orc. I can handle myself against any man, and my friend here can shoot an arrow into anything from… what did you say it was? 800 feet away?”

“Y-yeah…” Lucari said shyly. “Besides… I’m not really… you know, into men like that.” 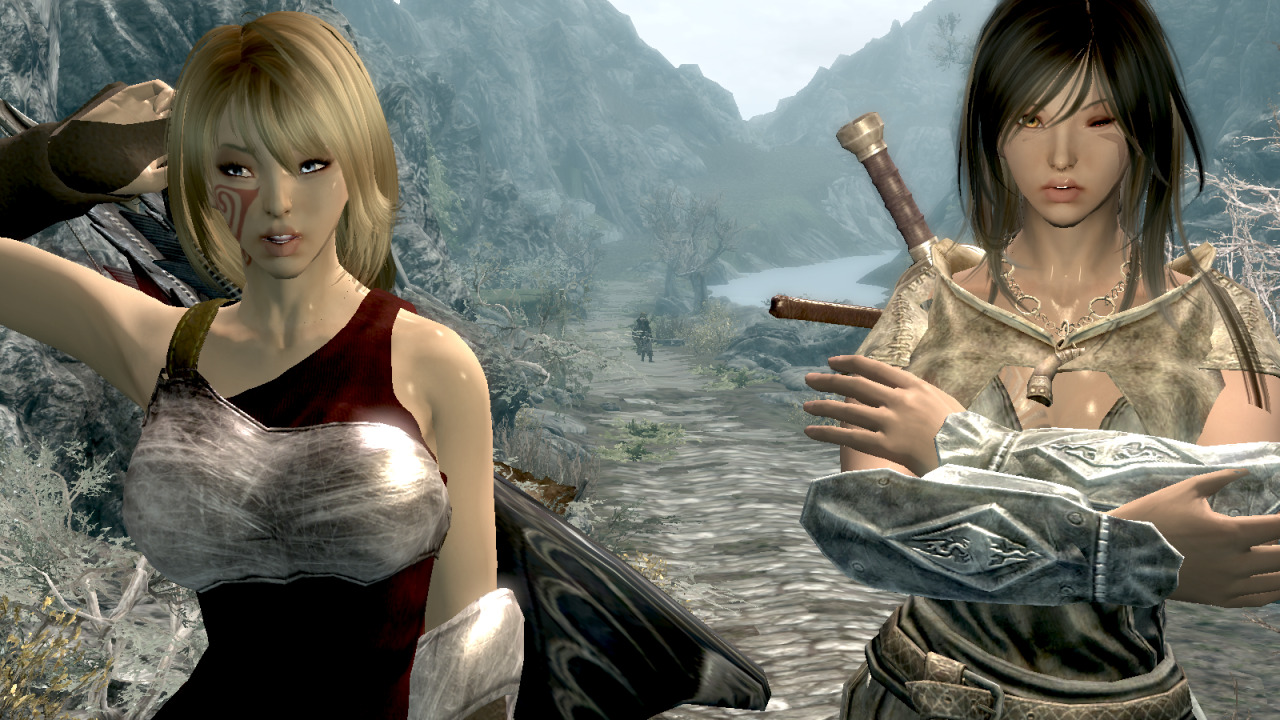 “Yeah she’s not into… wait, what!?” Niyleen looked at Lucari in a whole new light. “Wait… so if I were I guy…”

“I probably… you know, wouldn’t have answered when you called out to me.”

Niyleen froze in disbelief of what she was hearing. “But you’re… I mean men… what I’m saying is… you said you wanted to be a mother one day!” 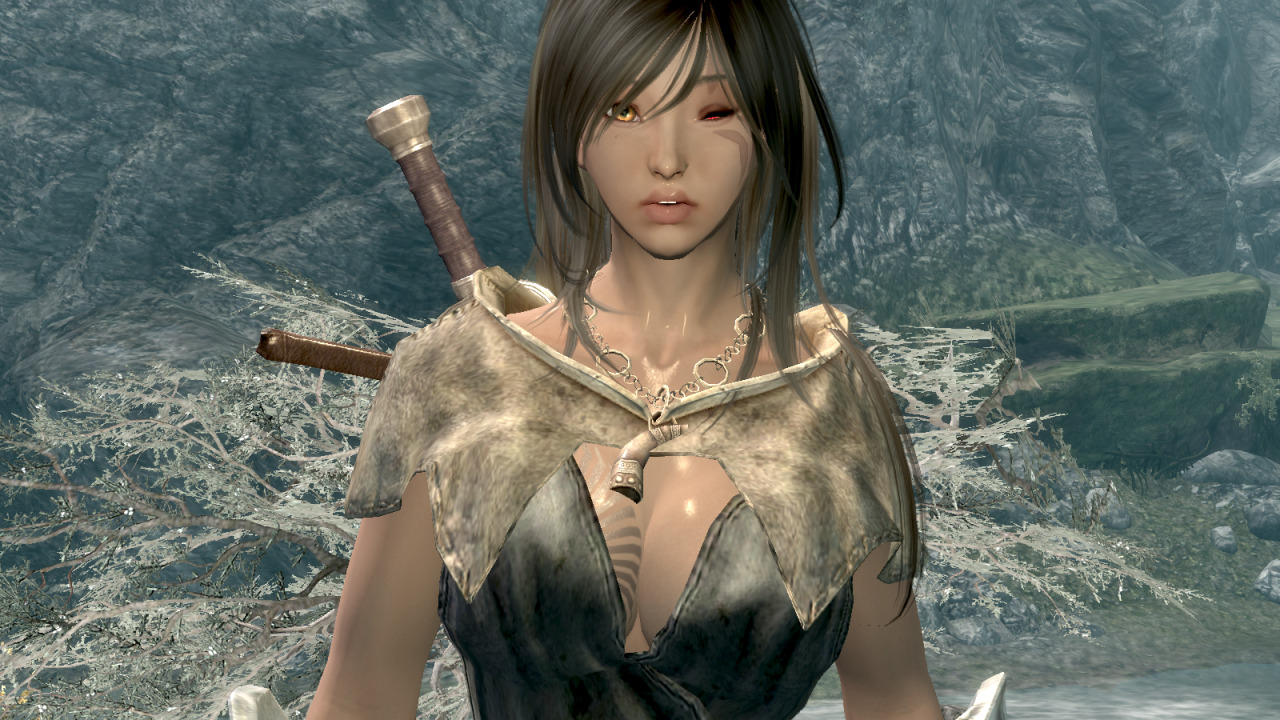 “Of course!” Lucari nodded her head feverishly. “B-but, I don’t know. Men are scary you know? And they always lie to try to get what they want.”

“I don’t know, women can be plenty scary and fake themselves.” This was a bit too much for Niyleen to take in now. The innocent cheery little Nord she had come to know may or may not have a thing for her? (Maybe this is why she was so open with me) Niyleen thought as she gathered herself. 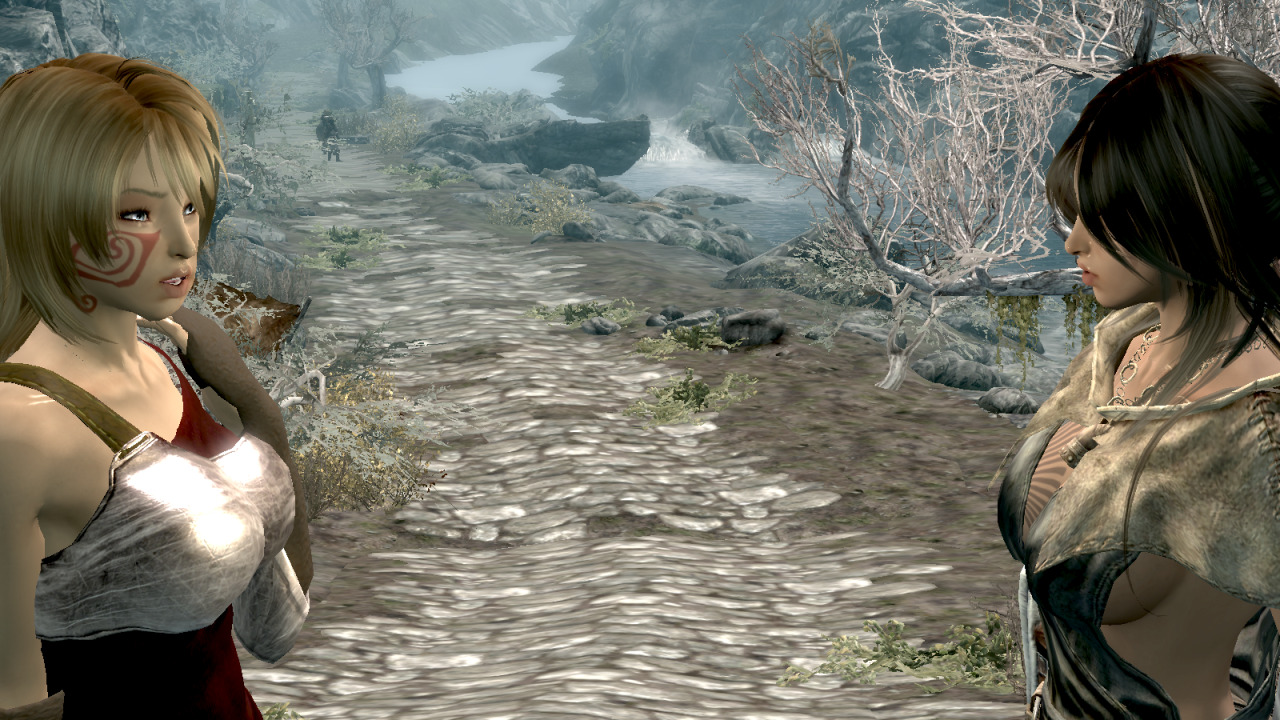 “I-I didn’t mean to hide this from you,” Lucari pleaded. “I just didn’t think it was… uh, necessary to discuss?”

(So you having a possible liking toward me is something I’m better off not knowing?) “Look forget it, we can talk about it later. So let’s just—” 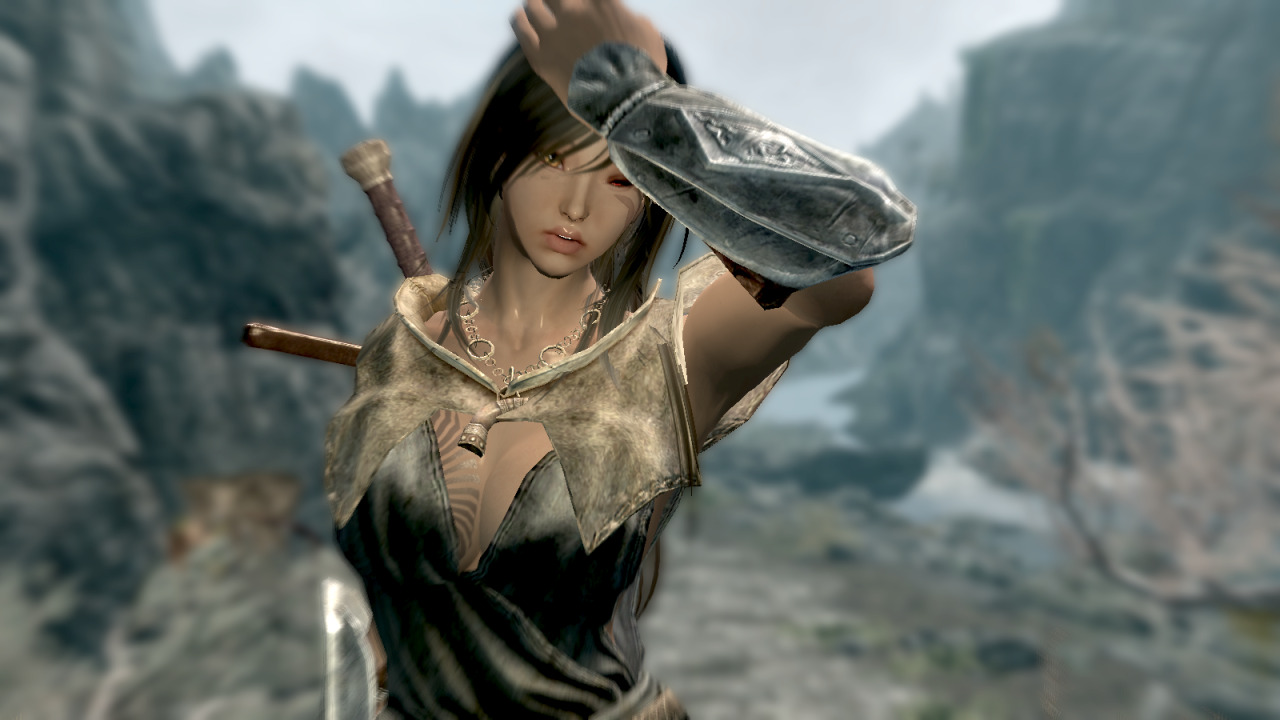 “Hey don’t just blow me off,” the Orc said angrily. A perverted smirk crept on his face. “Unless of course, you’re going to blow me off.”

“Let’s go,” Niyleen said angrily. “I’m suddenly not having a strong liking towards men myself.” She rushed past the Orc and Lucari was quick to follow. The two women turned and Niyleen said, “What is it now Snowberries?”

“Why you…” He twitched like he was going to swing on her, but then began to give her a look over. “Hmm… that long dark hair, that skin complexion… and this body type… I think a Redguard sellsword was up in Markarth telling anyone he could about someone like you.” “Yeah, something about how that woman set Sanuarach Mine ablaze and killed some of the Silver-Blood’s men,” the Orc began looking at her even closer. “Yeah, no doubt. You’re exactly the type of woman he described.”

“That doesn’t even make any sense.” Lucari came to her defense. “Niyleen can’t use any spells. She told me herself. Isn’t that right Niyleen?”

“…” (Shit… I should have told Lucari I was used to be a bandit or at least told her I wasn’t always on the right side of the law… Well it was fun while it lasted.) The Orc drew his weapon. “Yeah… definitely it’s you.” He inched closer to Niyleen. “You may be wearing different clothes than he remembered but a minx like you wouldn’t have a problem getting anymore. Don’t worry, you won’t need any clothes at all when I turn you in to the Silver-Bloods and they haul you into Cidhna Mine.”

“Come on Niyleen. Tell him it’s all a big misunder—”

Niyleen reacted immediately. She disarmed the Orc, swept his feet from under him and impaled him through the chest before he hit the ground. She then wriggled the blade around before withdrawing it from him. 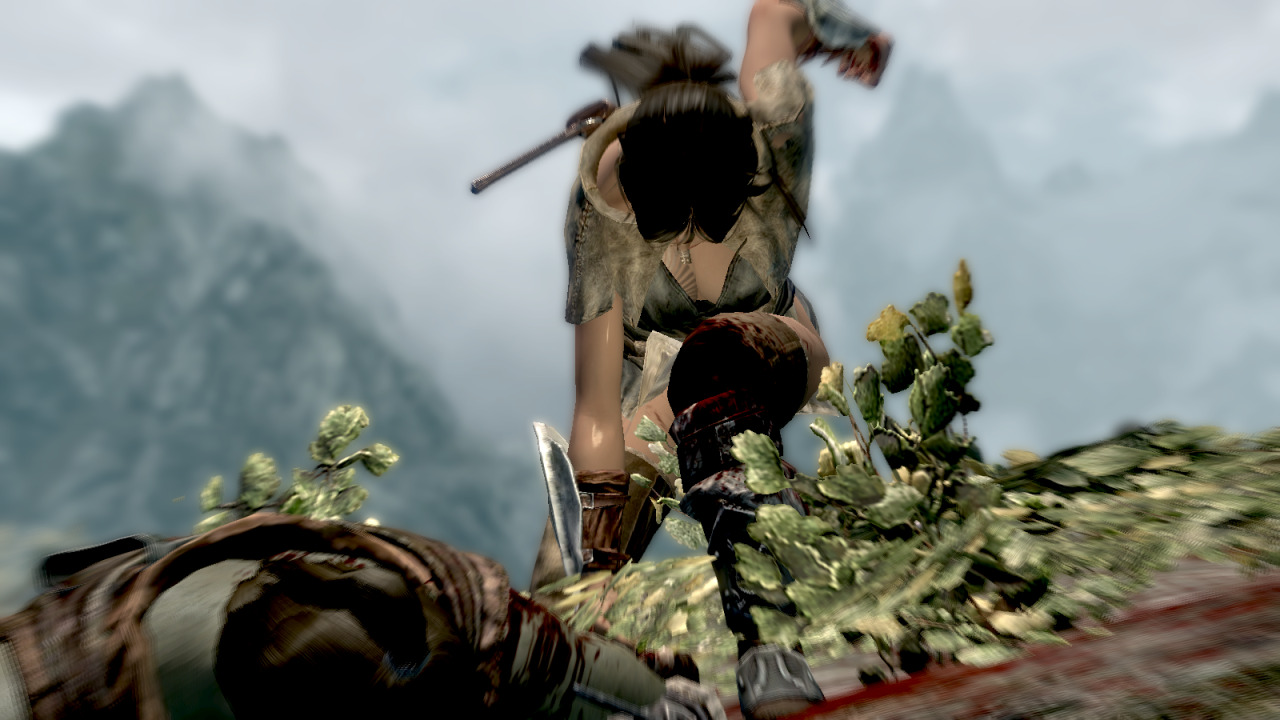 Niyleen wordlessly threw off her new acquired garb, and replaced it with that of the fallen mercenary. Upon doing some readjustments to the armor so it would fit her properly, she noticed that it was a bit skimpy for her tastes, but she also felt less vulnerable than she had even in her fur clothes. 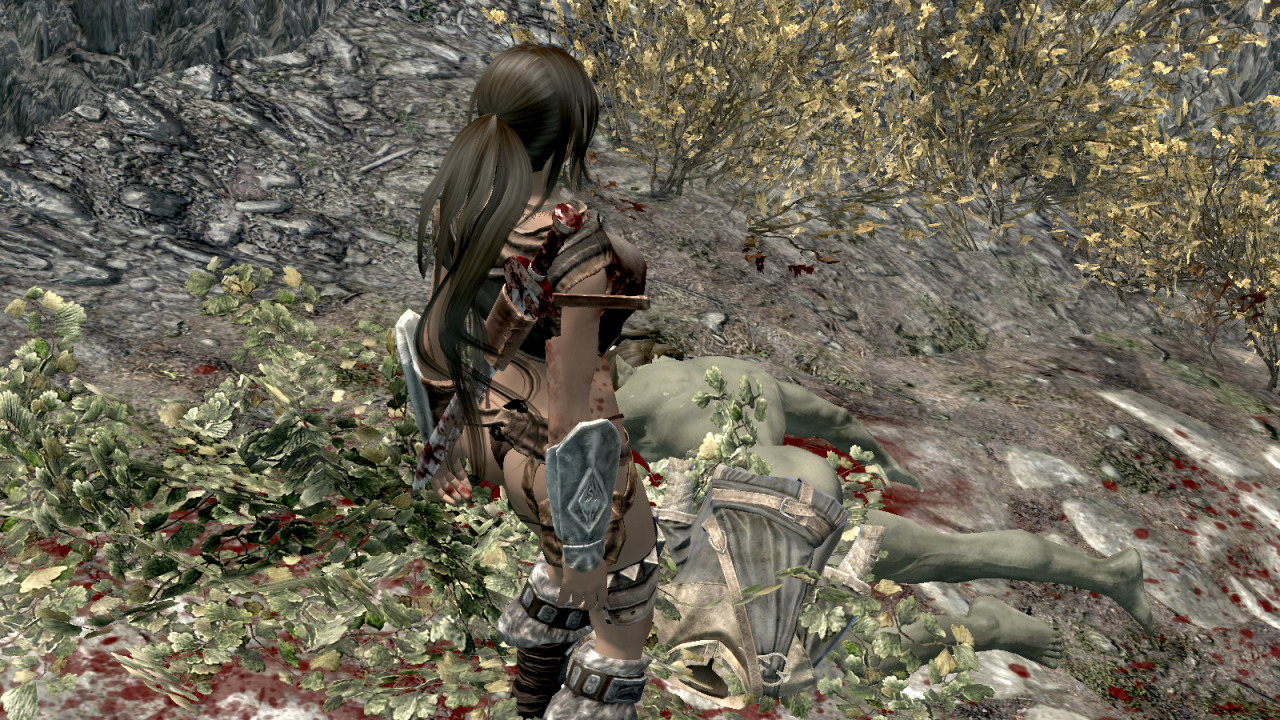 Niyleen didn’t have to look at Lucari to know how pained she was by this. However, that was how the Nord girl was and looking down at her most recent work… this is how she was. “I did indeed,” Niyleen said coolly.

“Why?! Wasn’t it all a big misunderstanding?” 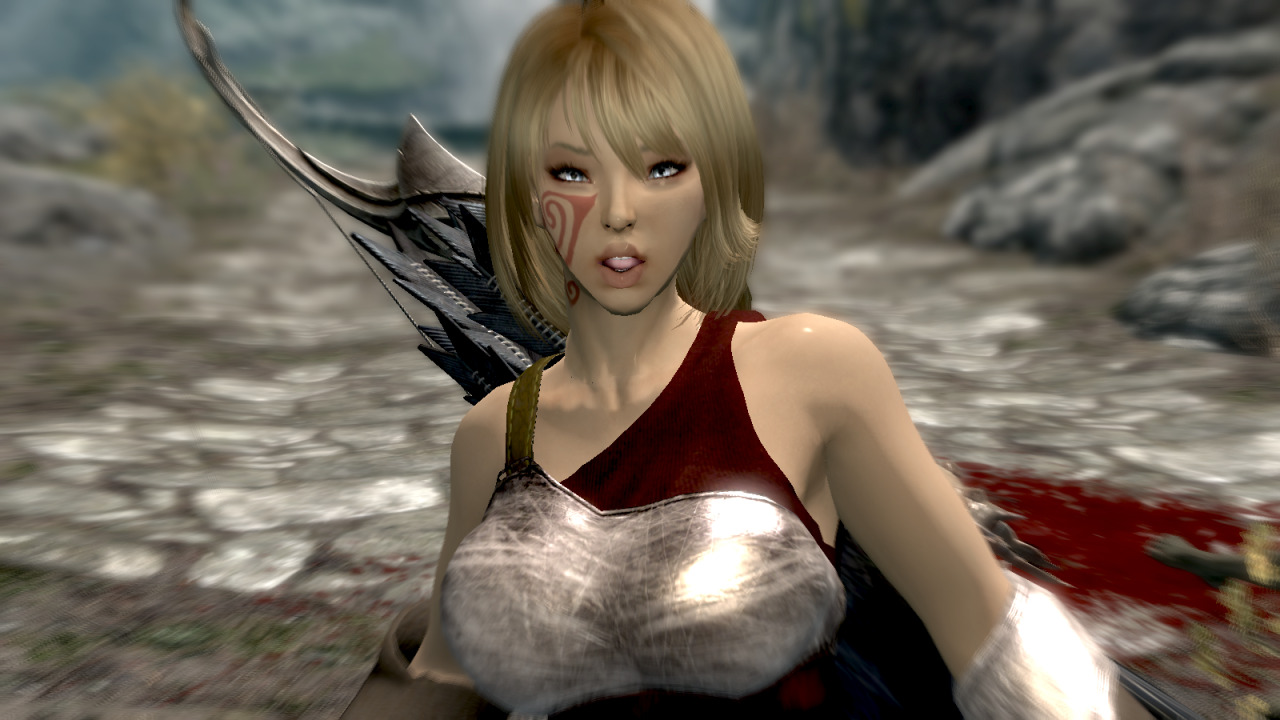 “Let me put it simple for you,” Niyleen said. “I’m a bandit… former bandit; killing, stealing that’s my forte. The men he was talking about were trying to steal the land from an honest landowner of the Reach. Trying to turn over a new leaf, I tried to help him, which I did. But I had to kill a few of the Silver-Blood’s sellswords. Believe me or not, but that’s the truth.” “Don’t you think this was something you should have told me?” Lucari said tear welling up in her eyes. “You said that you were trying to help other people… how is killing people helping anyone.”

(She wouldn’t understand… and I don’t have the patience to let her.) “Don’t talk to me about what’s necessary to tell someone. Especially since you only joined up with me in order to sleep with me, Miss Lesbian.”

“Of course I do. Come to find out our entire friendship was built on lies,” Niyleen laughed sarcastically. “And to think I only grouped up with you so that you wouldn’t become another bandit’s plaything and then discarded like trash.” Lucari couldn’t hold it any longer and tears began to flow down her cheeks. “This isn’t you… this isn’t the Niyleen I know. The Niyleen I know is kind, patient and firm but caring. She’s not this cold… bitch!”

(I’m so sorry Lucari.) “Then I guess you don’t know the first thing about me, because I AM a cold bitch. A scary lying cold bitch through and through that’ll do anything and say anything to get what I want. That’s who I am, and a milkdrinker that’s just stopped sucking from her mother’s tits won’t be able to understand what I’ve been through or why killing sometimes is the only answer.” 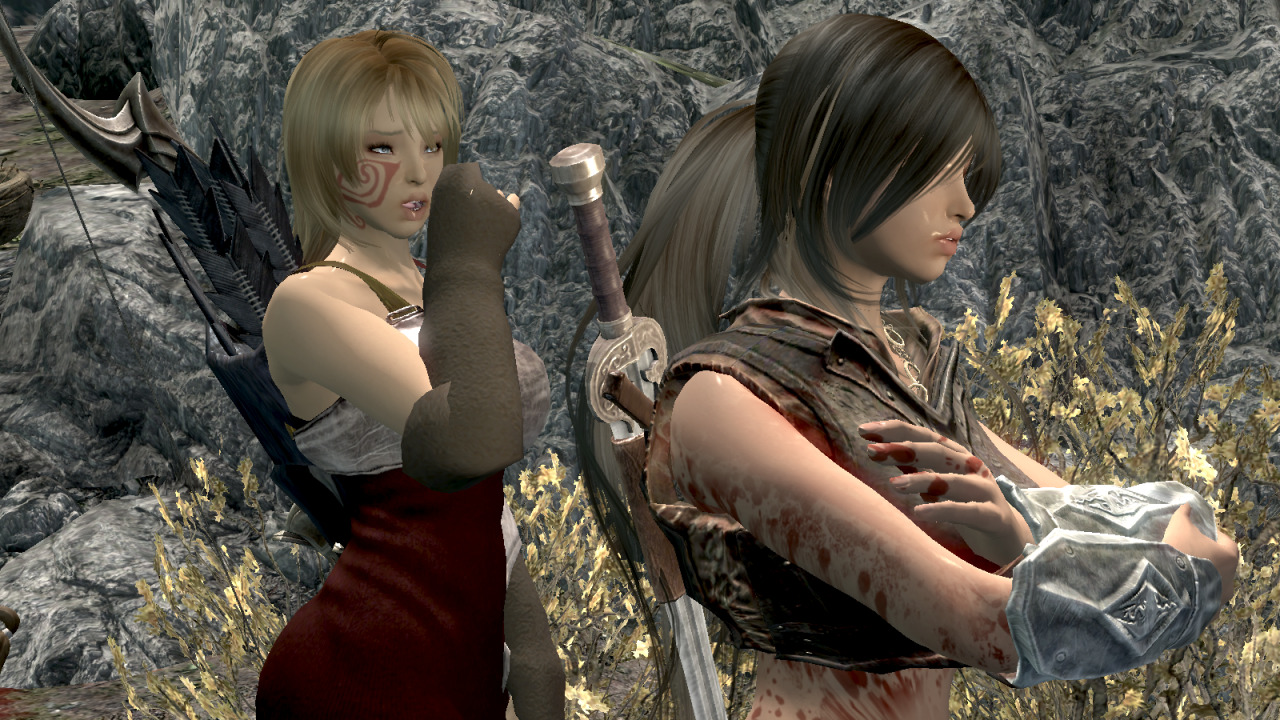 Niyleen turned to face Lucari and the pitiful look on the poor girls face said it all for her. (This is enough. I’m sorry Lucari.) Niyleen walked past her, bumping her on the shoulder for added effect before walking off. Up until now she was able to keep it together, but now that she figured that she’d never see the cheery little Nord again, Niyleen was having a rough time holding back her own tears. However she was her mother’s daughter, and that fierce Redguard blood in her wouldn’t allow her to cry over something like this… easily. 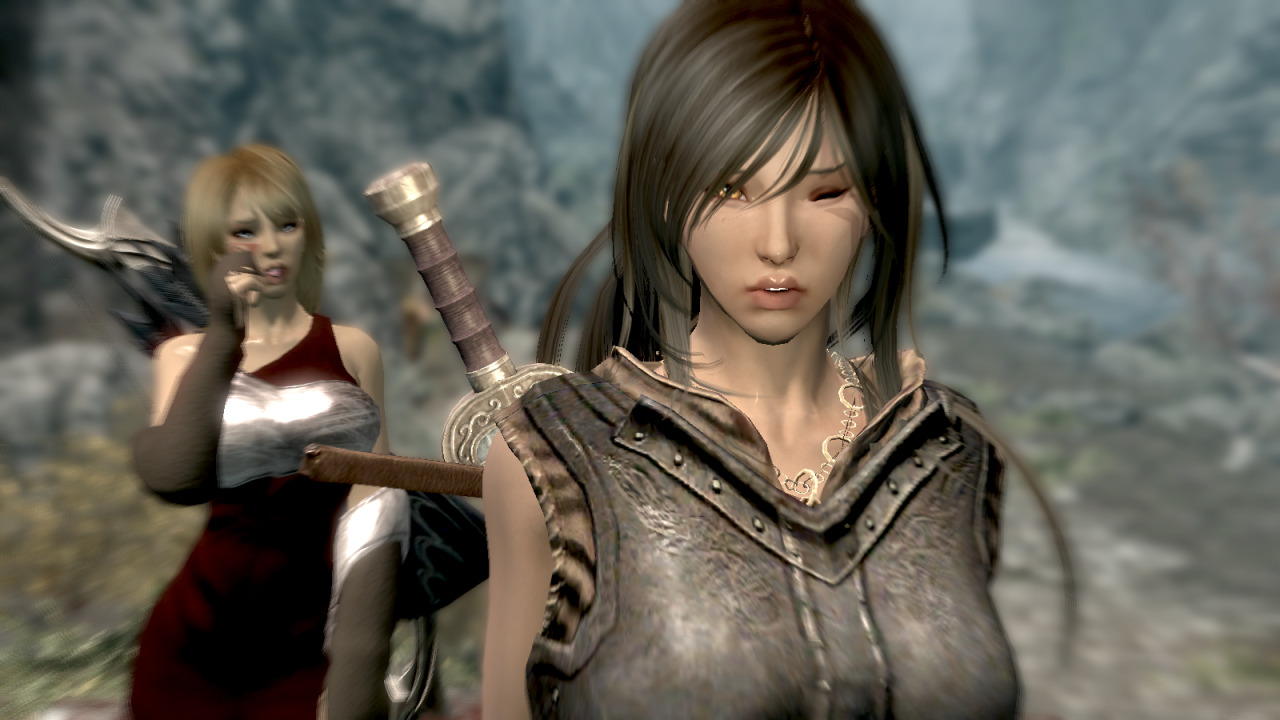