Saying goodbye to Karthwasten Niyleen headed back down the hill. Halfway down she couldn't contain the itch any longer and broke down and counted her coin. “Hmmm, so the price of the lives of three men and saving your land from those greedy Silver-Bloods was only four hundred Septims Ainethach? Cheap Breton sweet talker.” She sighed and scratched her head. “But I guess I DO feel good about helping him… I guess.” 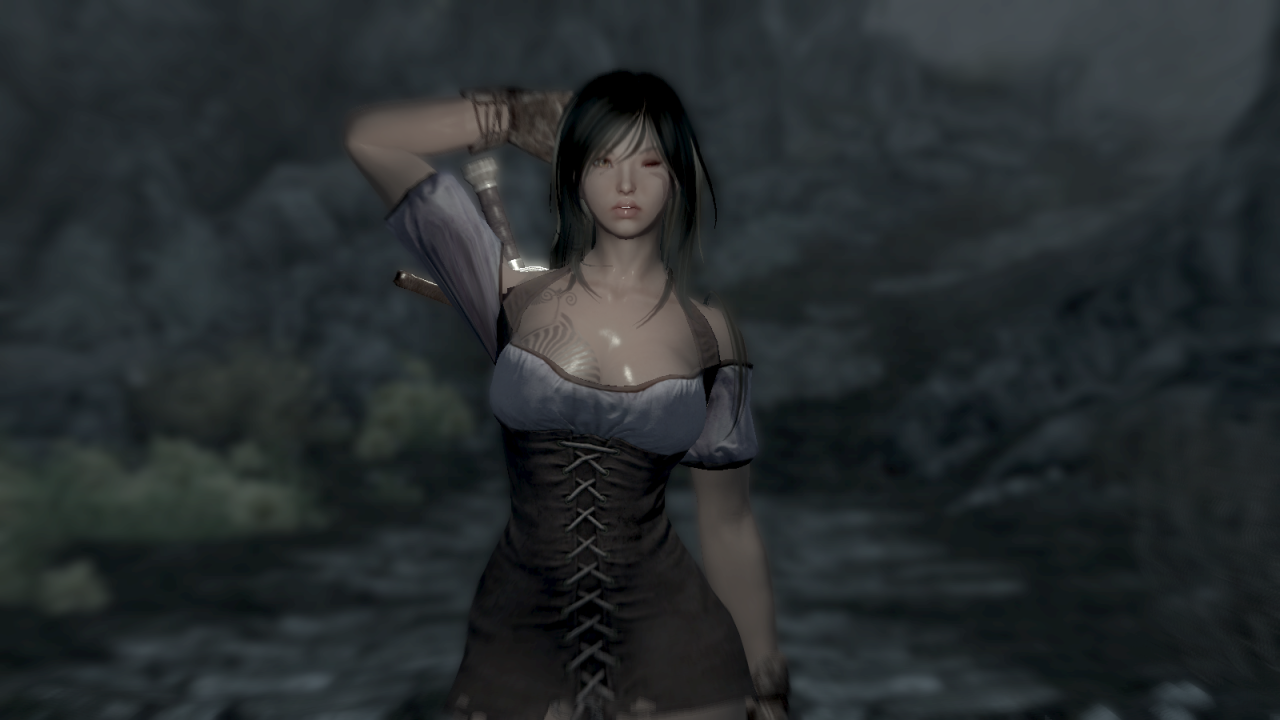 Upon reaching the bottom of the hill, Niyleen was met with a dilemma. Where to now? “I only came to Karthwasten because it was right next to my old hangout. I could to Whiterun and stop by Rorikstead on the way, but my heart is still in the Reach. So many… fond memories.” 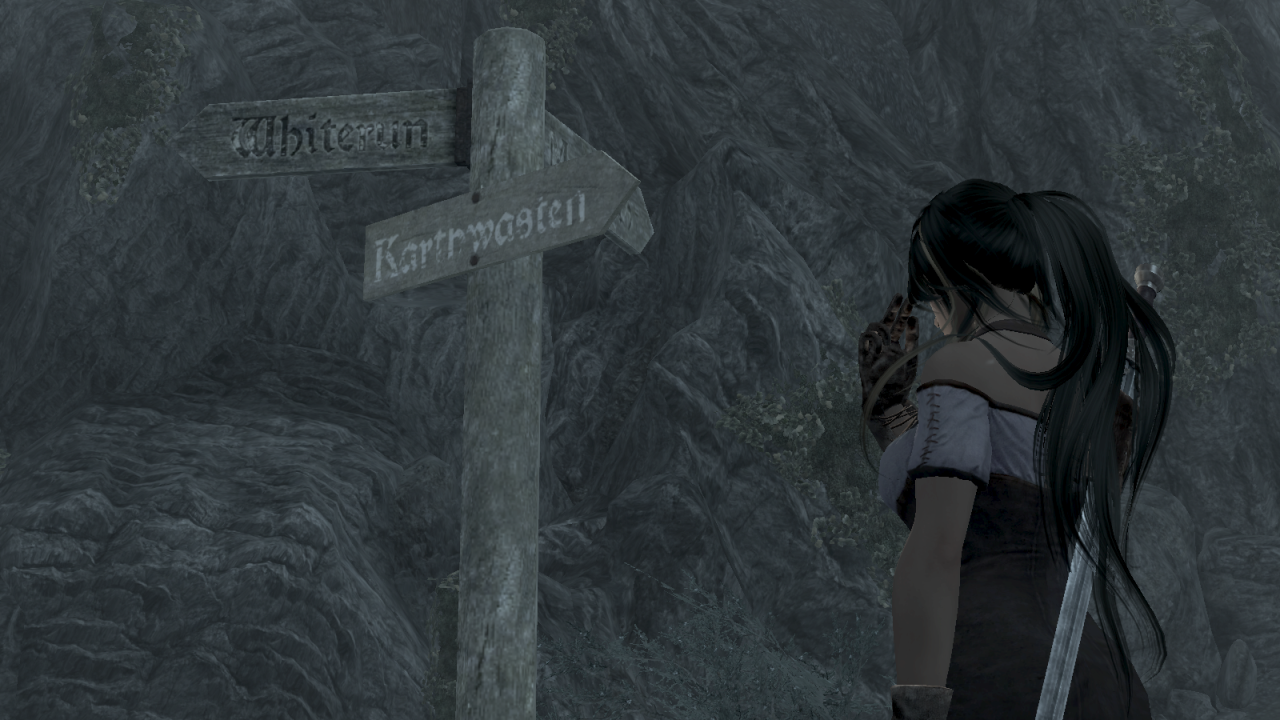 Niyleen gleaned over the pros and cons of both options once more and came to a quick decision. “I’m a Reach girl, through and through,” she said pumping herself up. “With all this Forsworn activity, I could probably walk right into Markarth unnoticed by the guards completely.” She jingled her coin purse. “And if not, I’m only a hundred short right now anyways. That’s pocket change.” 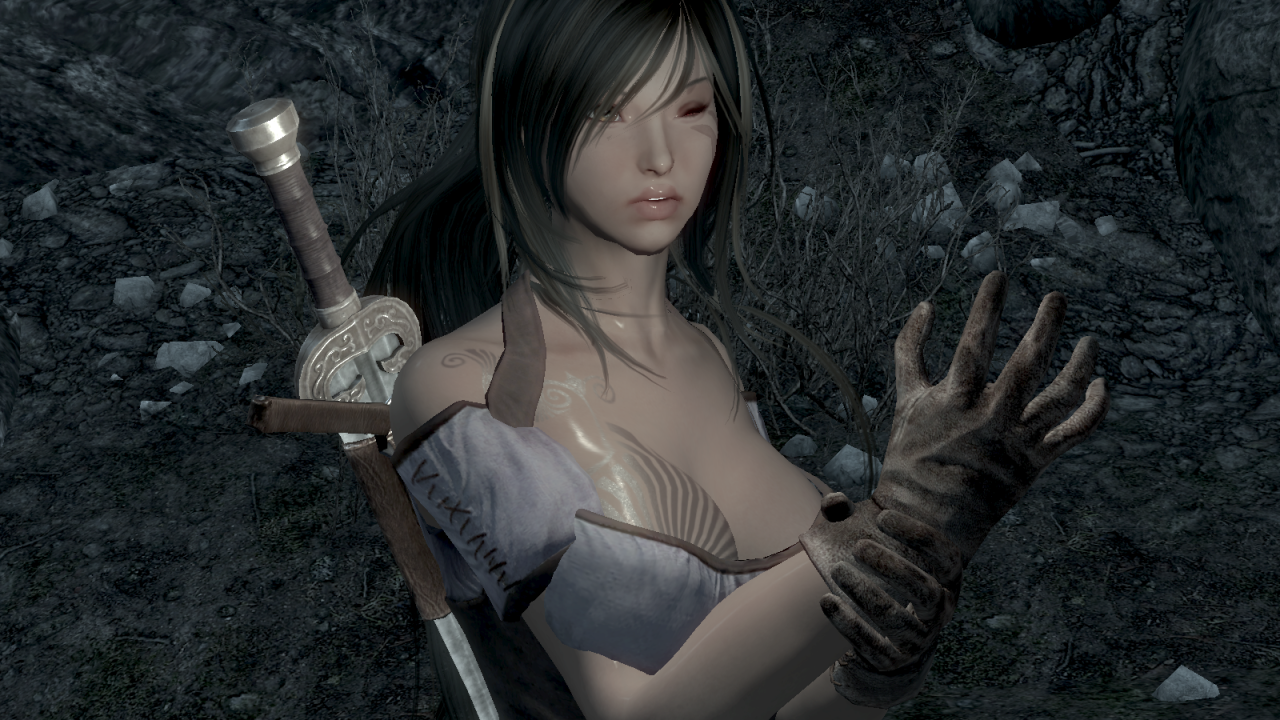 So as the sun began to rise, Niyleen briskly headed off towards Markarth. As she traveled she passed a few refugees and civilians that were trying to get as far out of the Reach as soon as possible. (Can’t blame you,) she thought each time one of them scurried past her towards Whiterun. Along the way Niyleen grabbed a few flowers and other plants. (There’s always some sucker that’s willing to pay a fortune for these stupid plants.)

She made to leave until she heard the young woman say, “…that’s left is to capture the Raging Inferno and bards will herald me as a hero for the ages.” 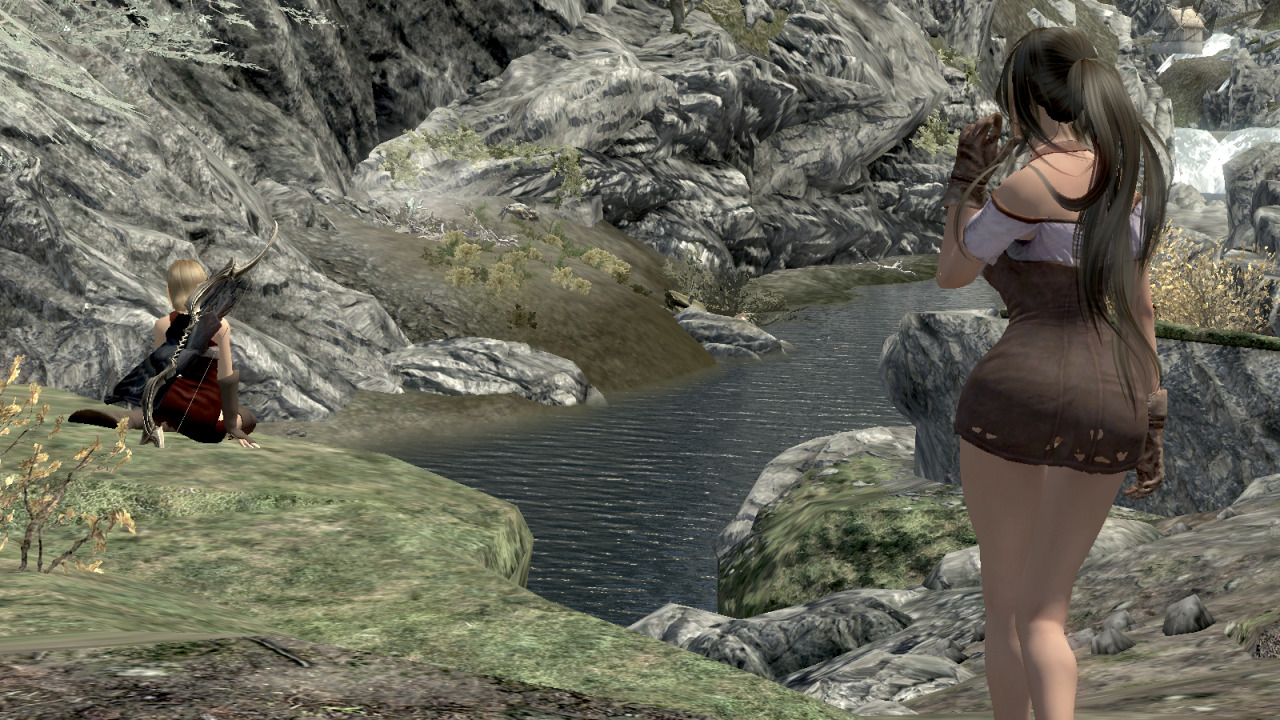 Niyleen froze and realized that the Reach was more dangerous for her than she had imagined. She looked toward the girl with raised eyebrows. (The Jarl is sending milkdrinkers after me now? Is he really trying to belittle my skill?) She walked over to the girl and saw that she was indeed a fair milkdrinker. (Julianos… please guide me.) “Hey there,” Niyleen said as cheerfully as possible.

…Or so she thought. “Hi there!” The girl said. She turd toward Niyleen and smiled.

(Dammit girl, lucky I’m not a vampire. You’re smiling brighter than the sun!) “Er, yeah,” Niyleen lost her place for a moment. “So what’s a milk—er, young girl like you doing out here in the Reach?”

She turned back towards the river and let out a sigh. “I’m trying to become the best.” “I don’t know about the best hero. I’m a true daughter of Skyrim but even I have to admit that the Hero of Kvatch is the best hero ever.”

The girl puffed out her cheeks. “What about Talos! He’s definitely the best. I mean, he was the last Dragonborn for crying out loud.”

Niyleen smiled and shook her head slightly. “I’m not going to count a hero-god among us mortals. That’s like discussing the best fighter at the Arena and mentioning the Grand Champion! I’m all about discussion, not having a circle jerk.”

“Hmmm…” It didn’t look like she got it, but Lucari still turned to faced Niyleen that bright smile still on her face. “So, what’s a young girl like you doing out here in the Reach?” “Well, I’m… heeey,” Niyleen narrowed her eyes. “Were you mocking me?”

“Ehehee, you got me!” She tilted her head slightly, still beaming. “Oh! Where’s my manners, I’m Lucari Pure-Shot. I hail from Dragon Bridge.”

“What’s a child from Haafingar doing here?” Niyleen said more angrily than she meant to. “Are you mental? There are Forsworn about and corruption as far as the eye can see. Not to mention bandits hiding around every corner.”

“First off my mother used to be Forsworn and she’s taught me all about them,” Lucari said puffing her cheeks out again. “And I already know about the rest.” She began smiling again. “But that’s also why I came to the Reach, to help cleanse it of those things.” 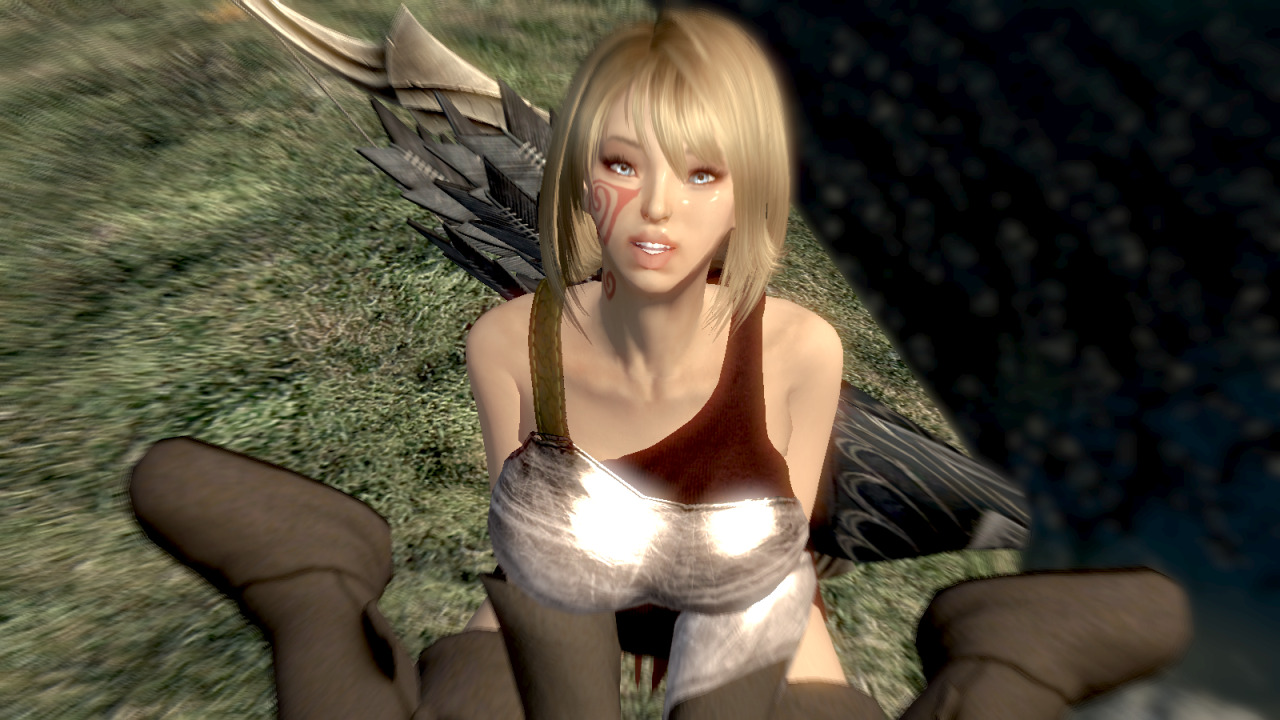 (And that includes me…) Niyleen closed her eyes and took a deep breath. This girl was too positive in her thinking and was definitely going to get herself killed, but the more she listened to her, the more every word started to sound familiar.

“Anyway, and you are?” Her eyes were hopeful and filled with expectation.

“Annnnnnd? You never answered my question.”

“Well,” Niyleen scratched the back of her head and thought about it. “I guess… the Reach is just my home. Other than making money here and there I guess I don’t really have a reason to be here. But I’m a Reach girl through and through, so I’ll probably just go around and… do what I can, I guess.” “That’s awesome!” Lucari jumped to her feet and looked into Niyleen’s eyes. “I knew from the moment you began talking to me that we were kindred spirits, but now I know it’s true. How about we team up and help out here in the Reach together?”

(If only she knew…) “I don’t know milk—er, Lucari. You seem rather… delicate.” She really wanted to call the girl air-headed, but even though she was a cold bloodthirsty bandit, she was mindful of other people’s feelings.

“Not to worry. I’m a good hunter, and a pure shot with my bow,” Lucari said gleefully motioning at the bow on her back.

“Well…” The innocent but forceful look in Lucari’s eyes told Niyleen that the girl wouldn't take no for an answer. (I beg you Julianos, this has to be a part of some bigger plan. The fool girl is going to get herself killed.) “Alright then. I’ll tag along with you.”

“Really!?” Lucari’s eyes widened and when Niyleen nodded her head she jumped for joy. “Yes! To be honest I was worried I would have to travel all alone. I’m glad I’ll have a friend to adventure with.” The two ladies set off on the start of this new adventure and soon it became rather apparent how opposite the two women were. Niyleen continued to avoid interacting with anyone they met up with, while Lucari always stopped to talk and try to help someone out. Also, Lucari just wouldn't stop talking. It was maddening.

Half an hour into their travels Niyleen stopped in the middle of the road and said, “Not to be rude, but if you don’t stop talking I will leave you here by yourself.” While she did talk less, the poor girl couldn't help but ooh and ah about anything that they saw, and although it was still annoying, Niyleen could feel herself breaking down and just accepting Lucari for who she was. It wasn't like she disliked the girl or anything, but Niyleen had always been a loner even within the groups of bandits she’s worked with over the years.

After venturing for a while, Niyleen stopped, drew her weapon and motioned for Lucari to do the same. Slow they crept closer and it was as Niyleen had feared. “One of Stendarr’s followers,” Niyleen said bitterly. She looked around for any aggressors. “What’s a vigilant doing way out here? There aren't any Daedra in the Reach, and the only werewolves and vampires I’ve heard about were over in the east.” Lucari frowned. “Is he dead?”

Niyleen check for a pulse. “He is indeed. He’s also cold… too cold for a body that’s yet to begin smelling. Especially with the warm weather the Reach has been getting lately. Yeah… this was probably a Forsworn attack.”

“So what are we going to do about him?”

Niyleen looked at Lucari and could really see the concern on her face. “Well… I’ll be taking his boots and garb and fashioning it into something more my style.”

“You wouldn’t.” Lucari gave her a disappointing look. “Of course I would,” Niyleen said proudly as she began to strip off the Vigilant’s boots.

“Niyleen!” Convinced that Niyleen wasn’t going to change her mind, Lucari got up and stormed off.