Another inn, Ephedrina plays for the evening. 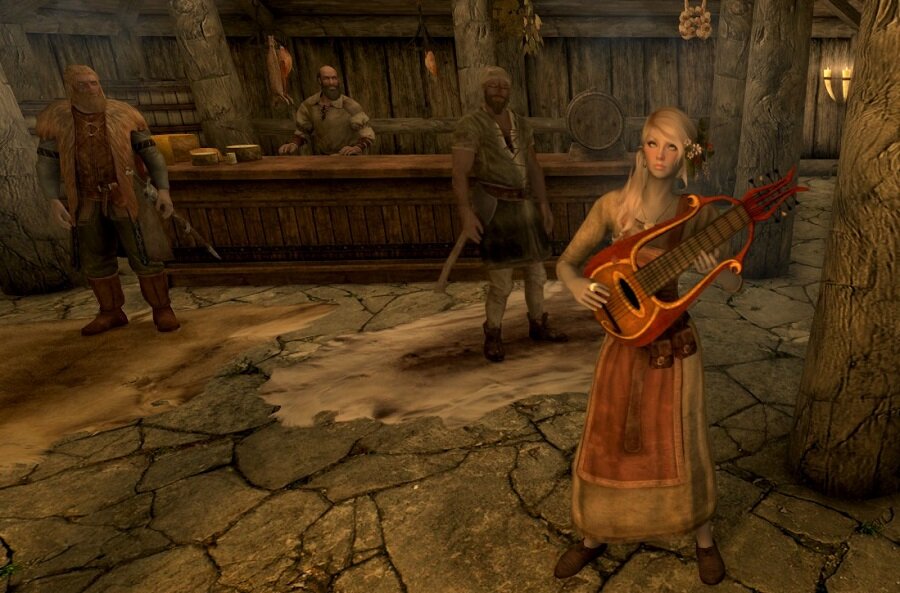 "Hey Ephy, it's been too long. Let's fuck." She can see the bulge where his penis strains against his pants. He's not hiding it.

"Not right now. Not tonight."

"How can you be so cruel? After everything I've done for you..."

"After everything you've done to me, you mean. How can you expect that I'd want to... I'd want to lay with you." Somehow she can't even bring herself to say the word.

"You're so full of shit," she says. The idea is preposterous. "You've done it because you enjoy it... because it gets you off to...to... treat me like that."

"That's true too," he acknowledges."But that doesn't change the fact that it makes you feel good." 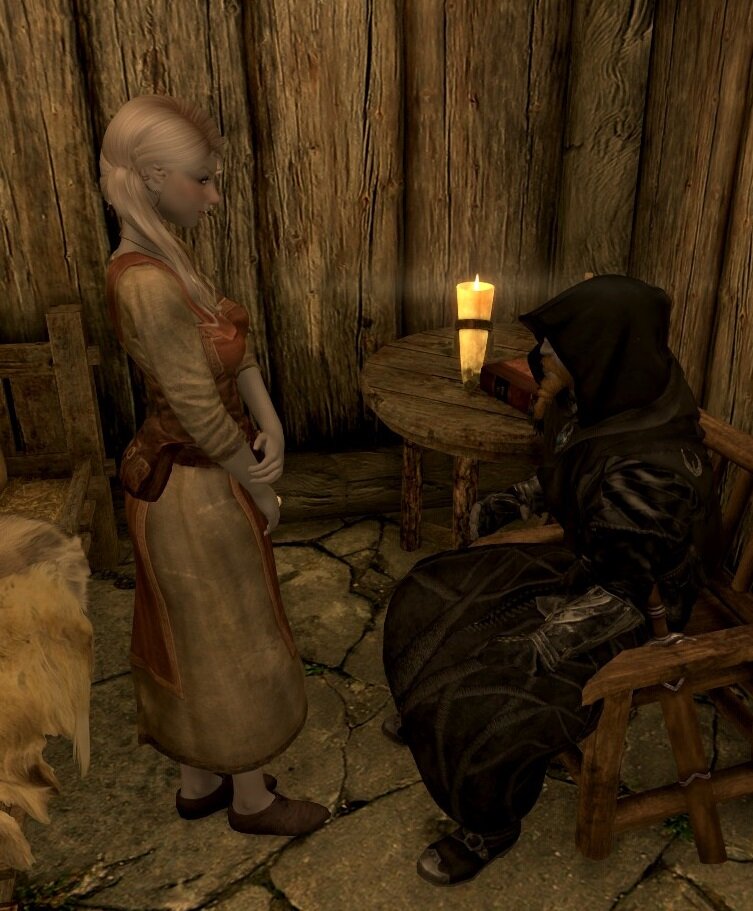 "Listen Ephy... when you're naked, bent over my knees and I'm smacking your ass... it's getting more and more red with each smack... it's beautiful. You're beautiful... and you're happy."

She stands there, mesmerized, unable to interrupt or walk away.

"I can feel your cunt dripping on me as you lie there. You can't help but grind it into my leg, ever so slightly. Don't think I don't notice. And then... picture it, hear the sounds in your mind... when I fuck you on the floor of the Ragged Flagon... your voice echoing, people watching... you climax so hard you forget where you are... you just come again... and again... and again."

He looks at her in silence as she stands before him, stunned, overwhelmed by the scenes in her mind.

"We both know it's true. It's what you need. It's who you are... but if you must..." he stops whispering, breaking the spell as his voice returns to normal, "... you may go now. Do your little show of independence. You'll be back... on your hands and knees... I'll put a collar around your neck... and you will finally be happy."

"Fuck you," she whispers without conviction.

He smiles and winks at her as she leaves, "I know you will. Very soon." 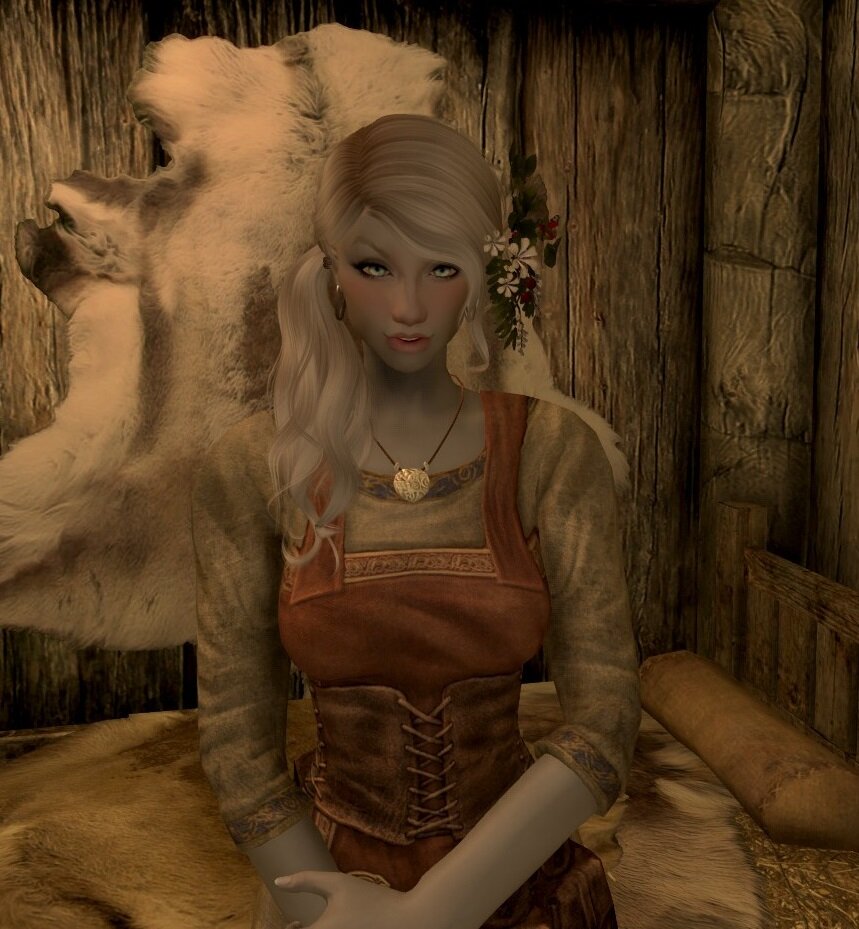 Ephedrina's had hoped the hot bath would clear her mind and calm her down after the conversation with Gascayn. It's not working. Her heart and mind are both racing. 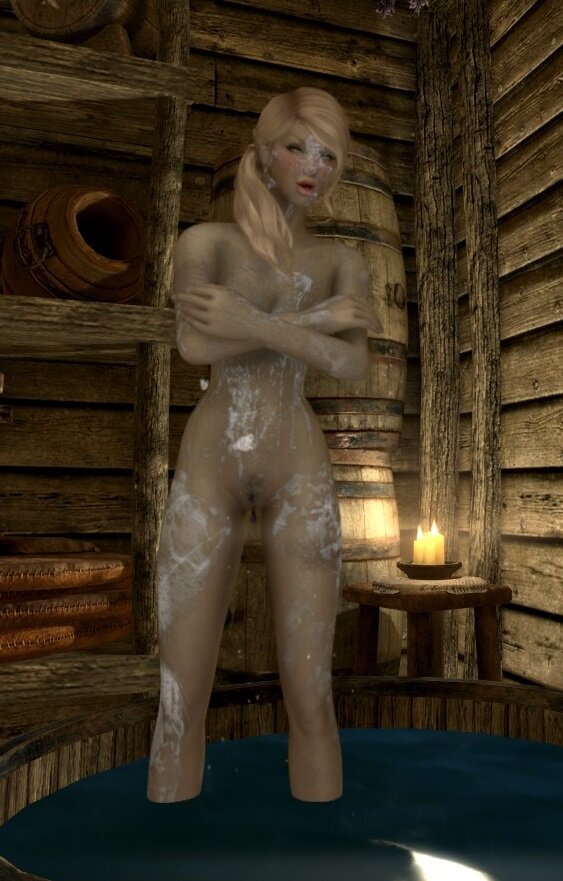 Ephedrina finds herself on the floor, spreading her legs, touching herself. She tugs at her piercing (there's still one deal left with Gascayn, he still has a claim on her). She rubs and kneads herself, waves of pleasure radiating throughout her body.

Her mind is full of images of Gascayn fucking her. She can taste and smell his semen... she recalls his mocking laughter. The pain he inflicted on her sharp, shocking... arousing. And people are watching her... degraded... humiliated... ecstatic....

There it is. Ephedrina moans and twitches as the first orgasm comes. Others follow soon thereafter. It feels so very very good.

She collapses on the floor, spent. 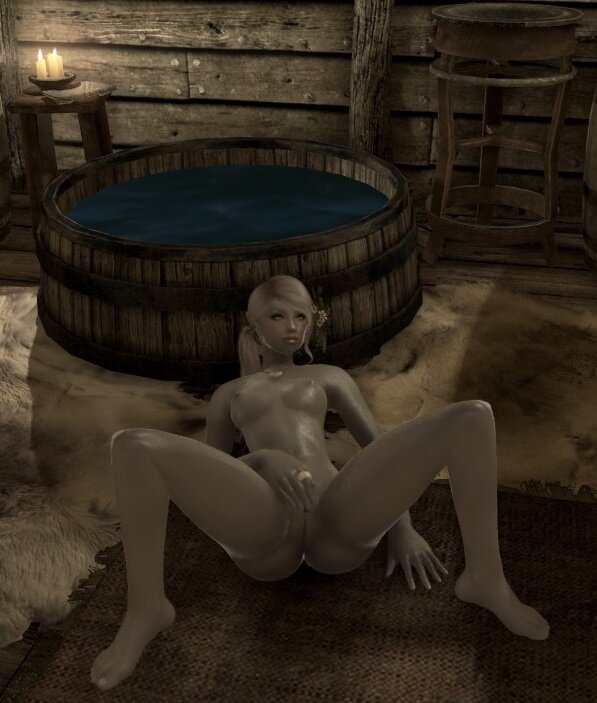 Additional images of Ephedrina thinking of Gascayn and the things he's done to her. 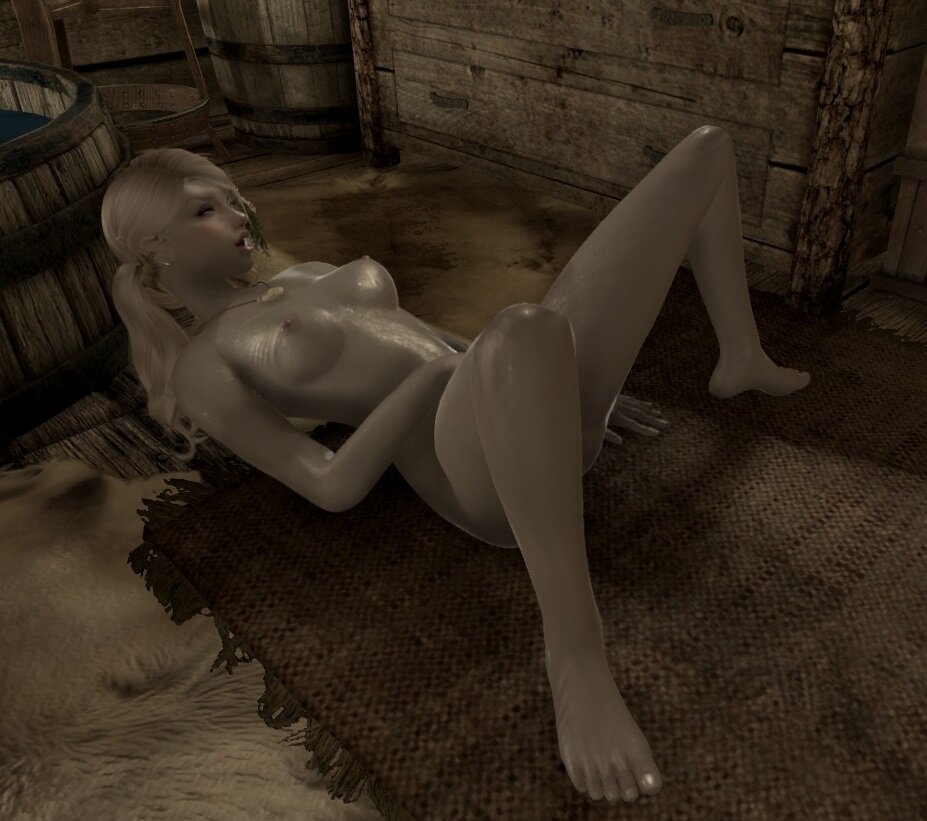 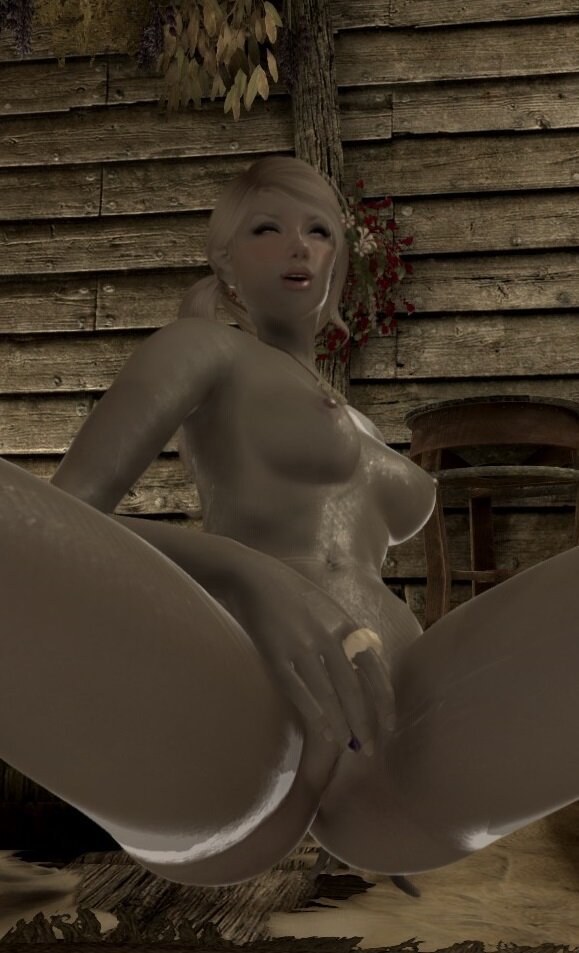 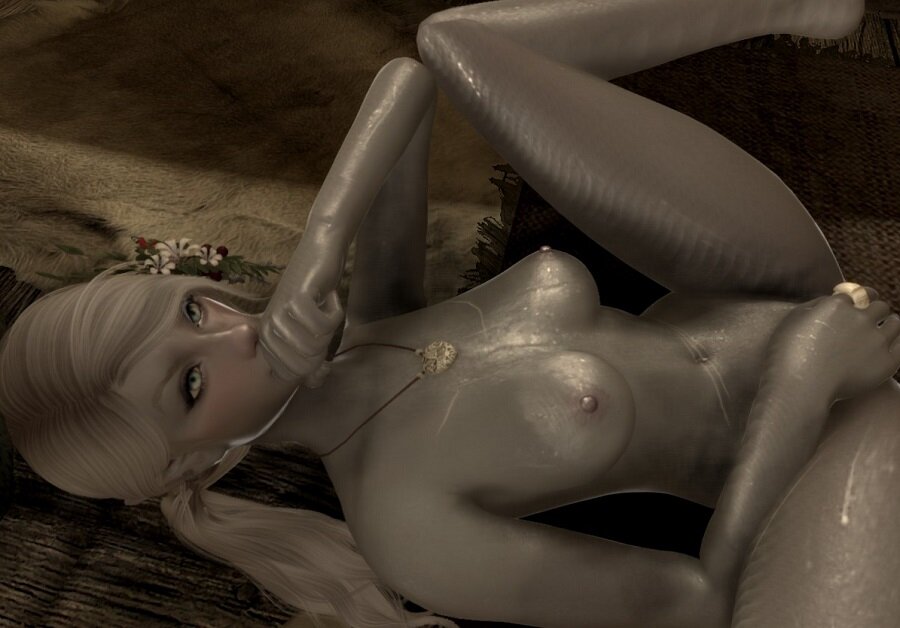 Ephedrina falls asleep, exhausted once more. She takes care not to think about what Gascayn said. 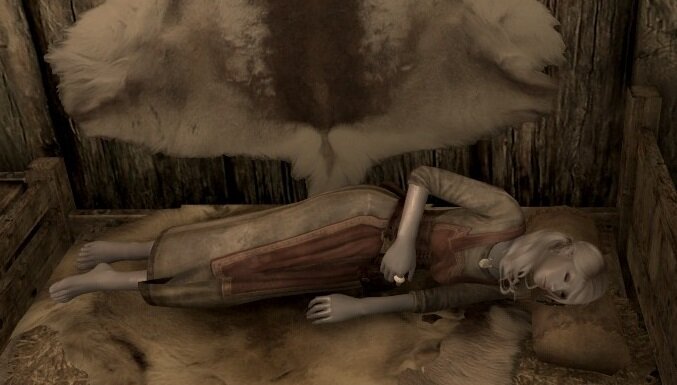 Neither of them bring up the conversation the next day.

Instead, they go adventuring. 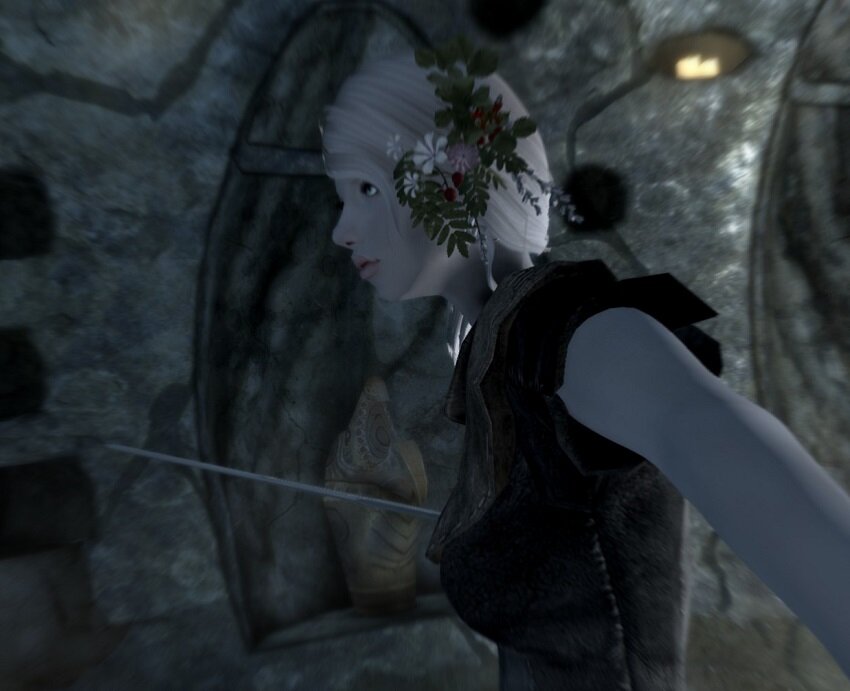 They make an effective team, it's undeniable. 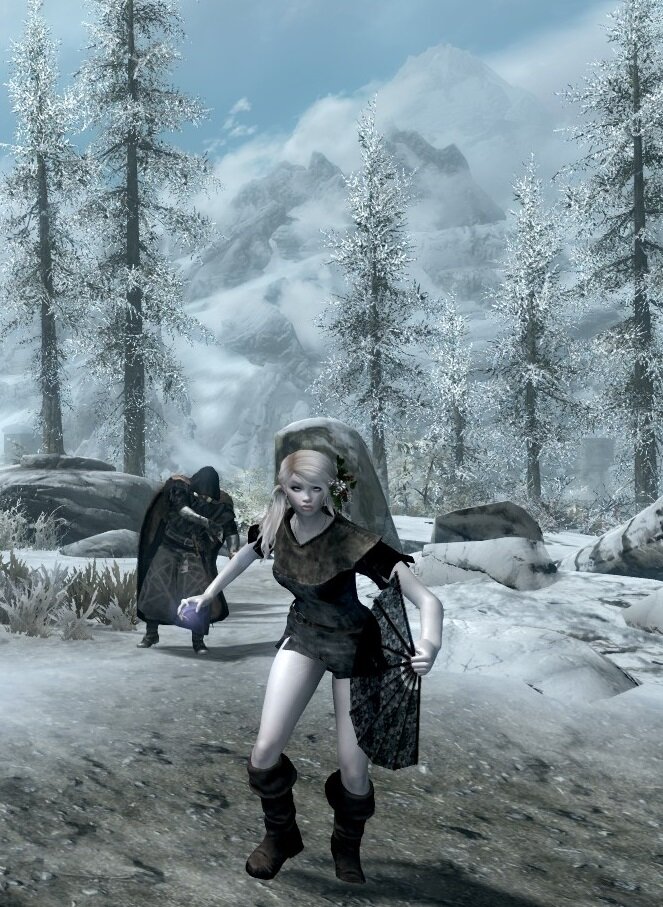 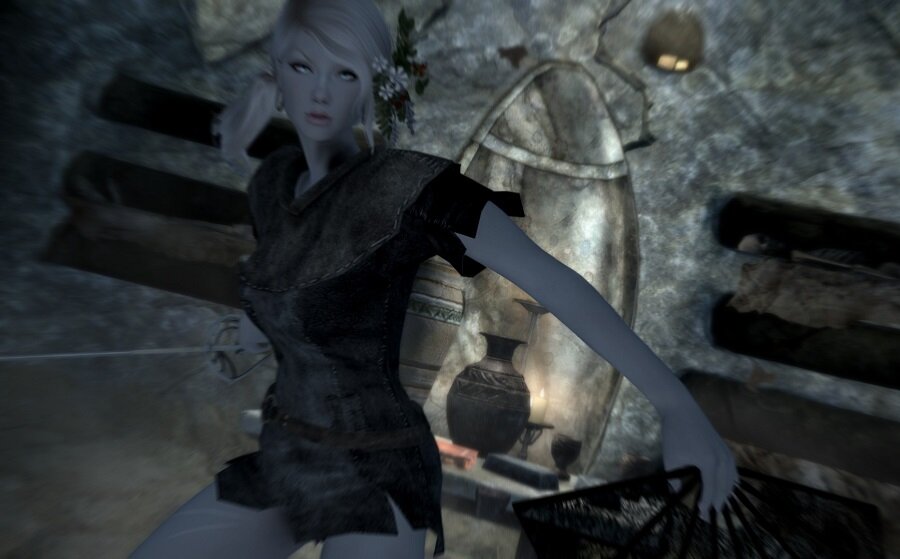 Is he right...? It's a disturbing thought. He's just playing with her. Trying to wear her down. Sure... but does that necessarily mean he's wrong? 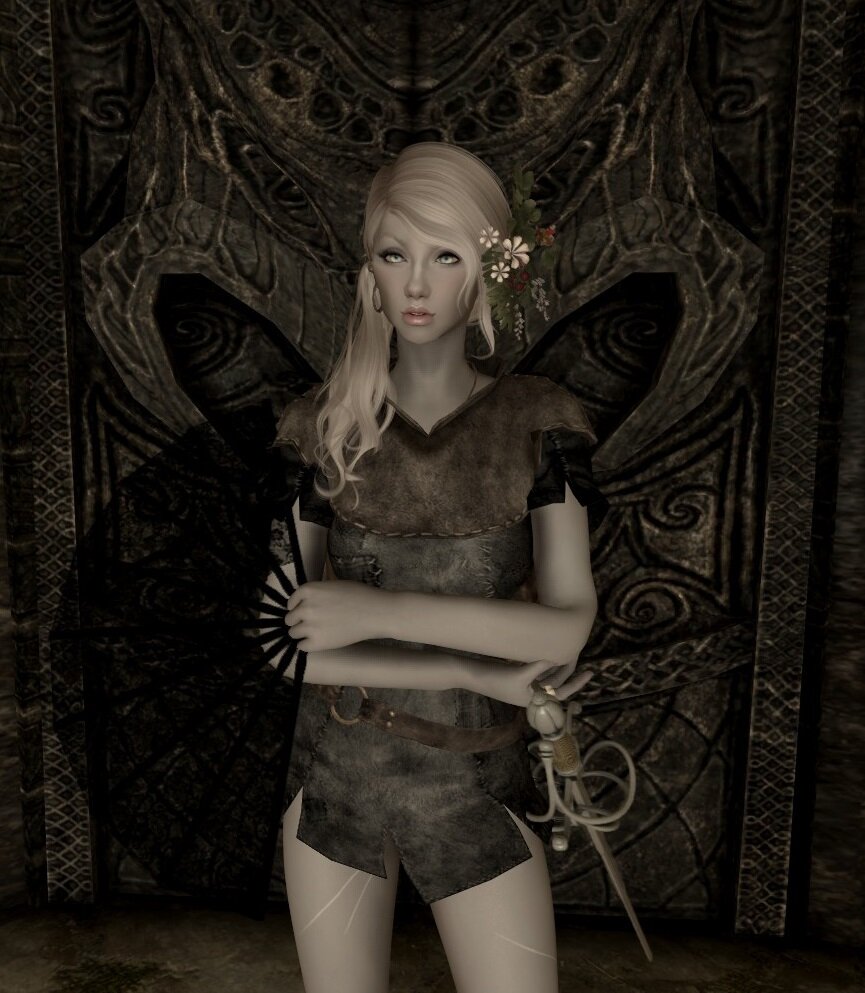 "Did you think about what I said?" 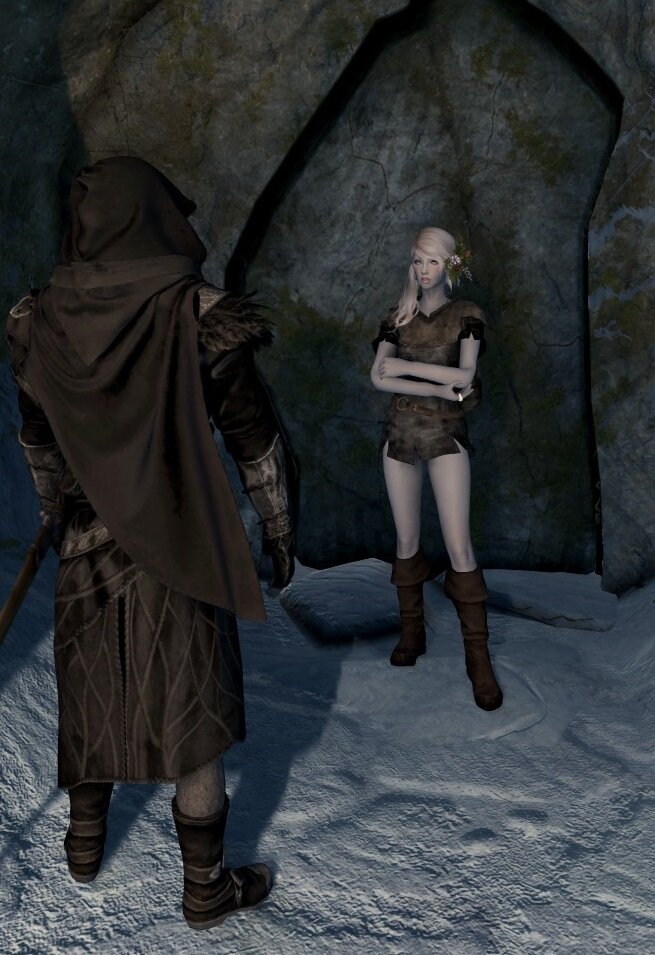 He continues "I've been thinking about you...."

Her nipples get hard almost immediately. Is it something in his tone of voice? Something about what she thinks he's thinking?

She waits for him to continue, but he doesn't... and it's not like she's going to ask him either. 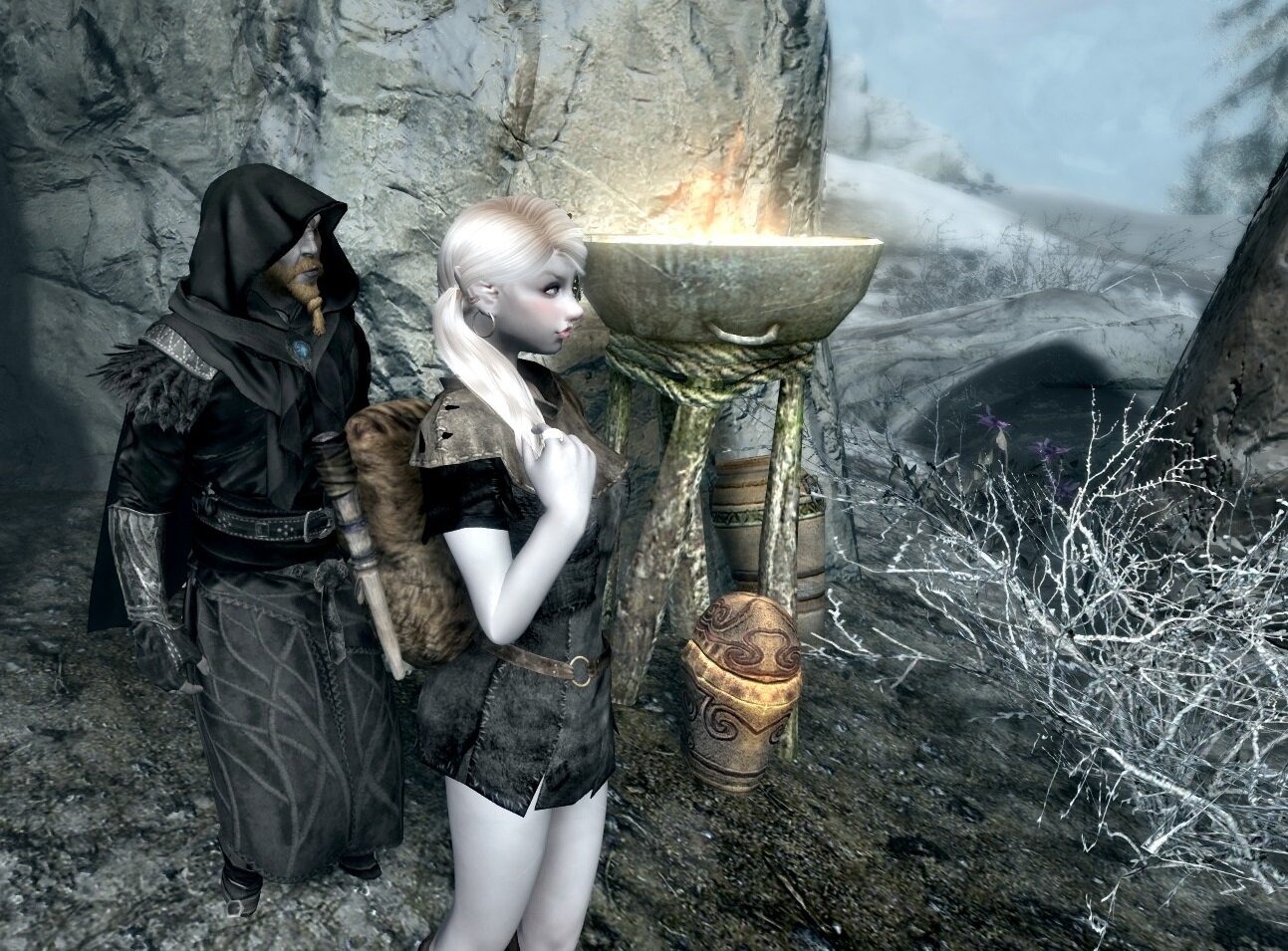 She easily cut down a couple of bandits. This is the first time he's complimented her, she thinks. Ever? 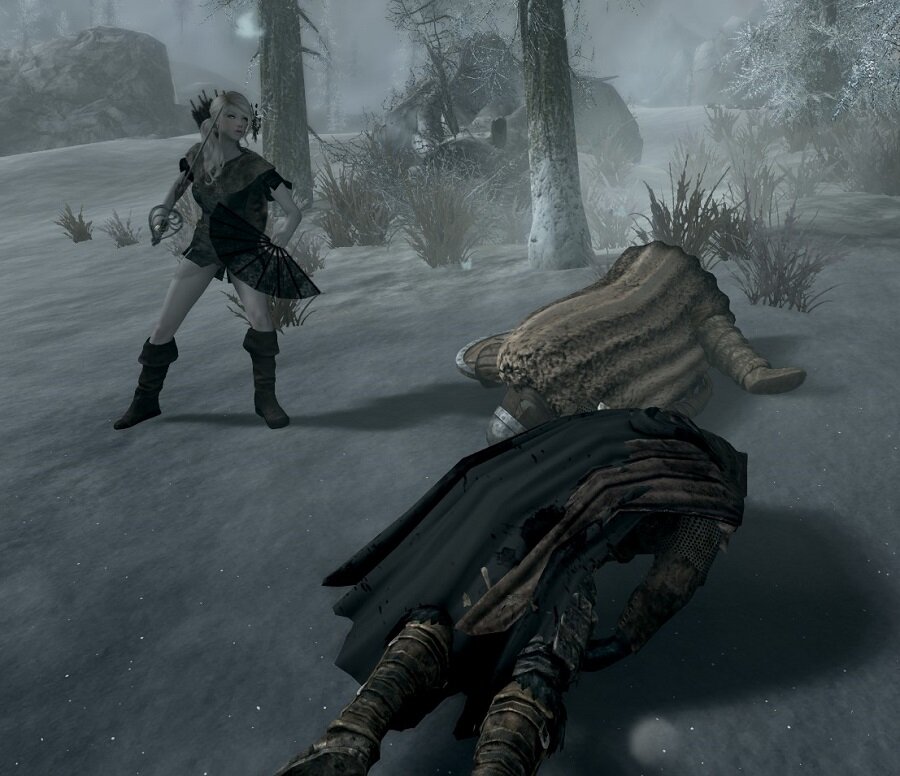 They approach Windhelm, grey, grim, and dour. There's some guild business they need to take care of there, according to Gascayn. 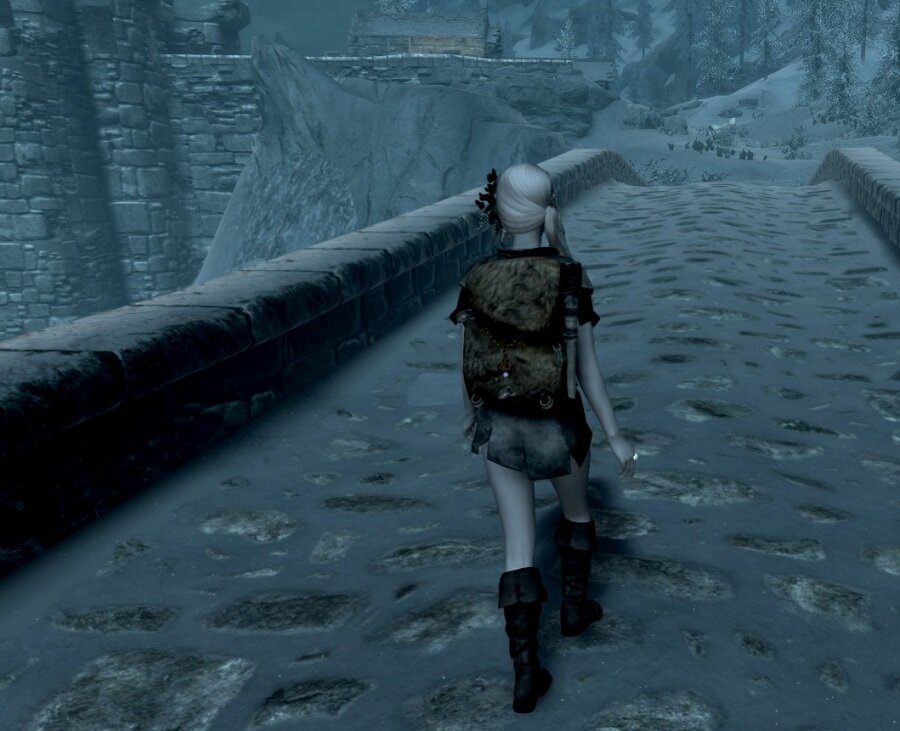 Ephedrina changes out of her armour, handing it over to Gascayn along with her sword. It makes her feel nervous, vulnerable.

He smiles at her. They both know he's enjoying it. He still has power. But there's no helping it.

Let's get this over with. Ephedrina resolves to be brave as she steps up to the gates. 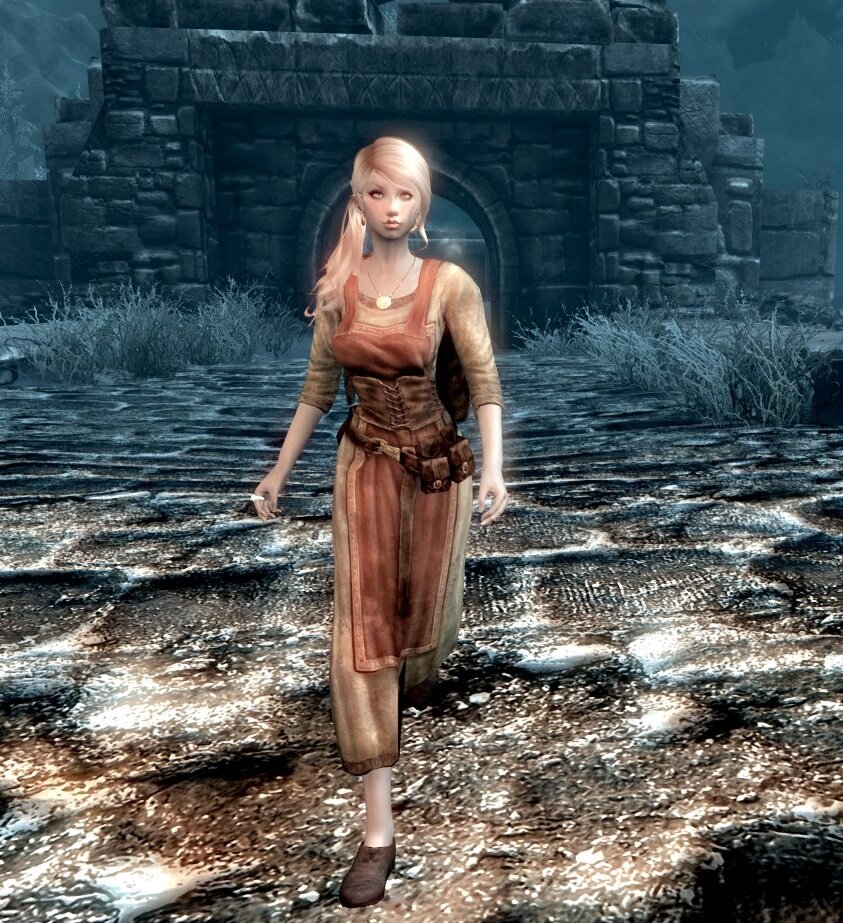 Her last action before stepping through the gates is to put on the cursed collar. Robbed of her magic, her armour, and her weapons. She is powerless.

Hopefully they'll be able to do what they need to do and leave as soon as possible. Hopefully Windhelm won't be too cruel.

"Ah... it's good to be back where it all began" says Gascayn with a big smile. He gives her a long penetrating look. For all the world it looks like he's undressing her with his eyes. She tries to meet his gaze, but eventually turns away, blushing... and hating herself for it. 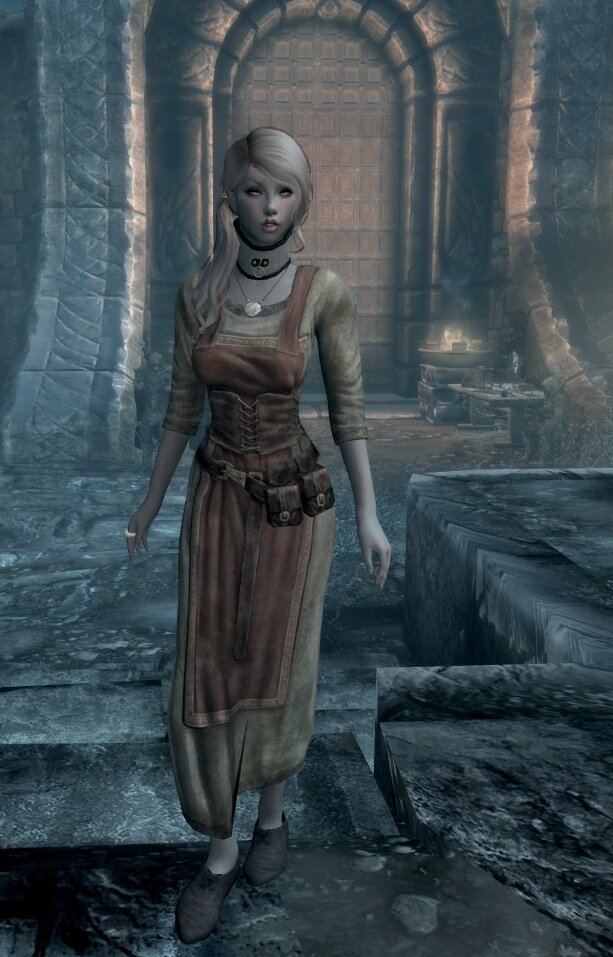