"Hey grey-tits, how much for a fuck? I want to stick it in your ass and then come in your mouth... I hear you people like that."

Ephedrina is playing at Candlehearth Hall and Windhelm is about as welcoming as she remembers it.

"I'll cut off your cock and feed it to the dogs if you talk to me like that again," she says between songs. She's a fuck-moll, yes (though this guy wouldn't know that), not a whore.

"Hey, sorry! No offense intended! I thought you might want to make some money... I was just trying to be nice...." The drunk mutters to himself as he slinks off "fucking greyskin bitch. What's her fucking problem?"

Gascayn, for his part, watches and smirks from the distance. Ephedrina still refuses to fuck Gascayn. He puts a good face on it, but she can tell he's frustrated.

She's frustrated too, but she knows how to deal with that frustration.

This time Ephedrina doesn't wait for the thoughts to intrude on their own. She deliberately starts constructing scenarios in her head, thinking of herself being humiliated and degraded as she masturbates. Gascayn figures into those fantasies, as does the drunk and his disgusting suggestion.

She remembers the first time Gascayn fucked her in the ass too. The complicated things she felt then.The things he's done since. It doesn't take long before her first climax. feels good. More pictures of Ephedrina as she imagines taking the drunk's cock in her mouth after being fucked in the ass. Gascayn is there too, calling her "my little whore" and laughing. 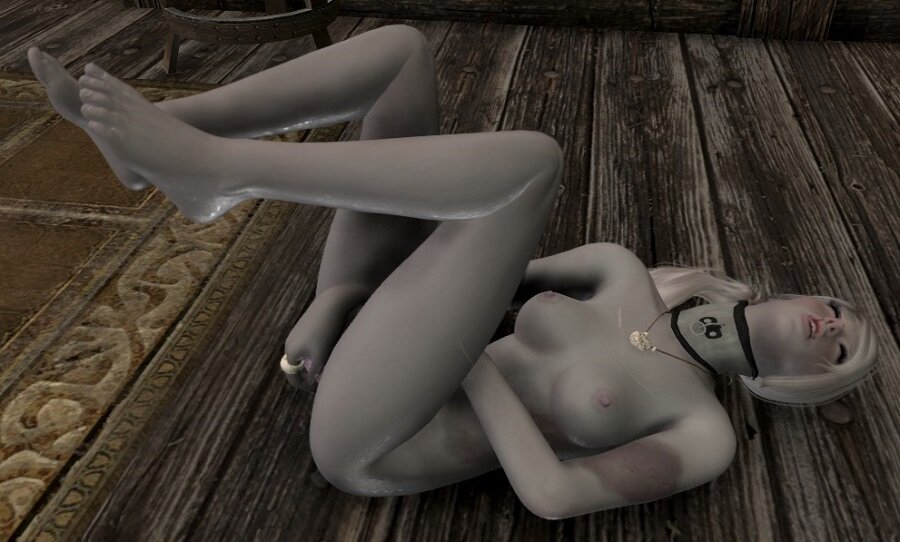 Satisfied, Ephedrina drifts off to sleep, thoughts idly passing through her mind. She obviously gets off on how Gascayn treats her... she wonders... did he make her like that, or was it always a part of her, only buried?

On one hand, it may be safer to keep these things locked in her mind - to be brought out when she needs them. On the other hand, the thought of Gascayn forcing her to heel as she feebly resists... is really really arousing.


She almost starts touching herself, but instead she falls asleep. The dreams are really vivid, though. The next morning she's brought in for another grabby search. The guard feels free to squeeze her breasts and press his erection against her through their clothes. But he lets her stay dressed. Almost a gentleman by Nord standards. The job is - of course - a fuck-moll thing. She lets some noble fuck her and while he's busy grimacing, she removes some jewelry from his purse. Easy.

Gascayn is watching, too. She looks at him, almost bored. No orgasm here. He looks away. They leave Windhelm soon afterwards. She is not going to miss the town. "I heard you play at Candlehearth Hall. You have a pretty voice."

They're hiring a wagon. She hears Gascayn whisper to himself "you should hear what she sounds like when she fucks."

Somehow - maybe because of his tone of voice - he sounds frustrated and petulant rather than degrading. He's trying to spoil the moment, to make it taste of him, to own her. It's not working. She smiles. The journey to Riften is uneventful.

"I'll be paying off my last deal tonight, Gascayn."

"No." Not sad. A little frightened, somehow. But that only increases her resolve. Gascayn got his tendrils into her mind. Best to shake them off if she can. She has to try. "Is that so? What does Gascayn say about that?"

"It's none of his business."

Vex looks surprised. That is pleasing. "So I hear you've bought out of your deals with Gascayn."

"And you're leaving the guild?"

"A couple of days is fine, but we need you. Some work requires a fuck moll. You're good at it."

Ephedrina nods. She is not intending to remain a... a fuck moll as they call it. But she'll worry about the Guild later. One thing at a time. Tonight it's about Gascayn. "You're going through with this?" It's hard to read his face.

"You're making a mistake. It's dangerous in Skyrim. You need someone. Someone to protect you. Take care of you."

"Could've fooled me," he says with his sardonic grin. The way you moan and scream sure makes it seem like you're enjoying yourself.

"Goodbye," she says with a pleasant smile. They both know she means "go fuck yourself."

"You're making a mistake," he calls out after her as she walks away. Not too loud, though. He wouldn't want to look weak in front of the rest of the Guild. Walking out of the Ragged Flagon feels good. Leaving Gascayn behind feels good.

Maybe he's right. Maybe she does need him to stay safe. It's a risk she's willing to take. Ephedrina plays at the Bee & Barb for a place to stay and a few coins. Most of the regulars there have seen her naked. They've seen her in chains, fucking, humiliating herself, in ecstasy.

Nobody says anything, though. She's about to begin a new chapter. "Are you that desperate Gascayn? You're trying that? Really?"

He sought her out at the Bee & Barb and he's trying to convince her to stay with him. He's not offering any changes in "the arrangement" - the money he'll claim from her, the "deals" he'll offer. He wants her under his thumb.

"I told you. We're done. It could've been different maybe, but you made the choices you made and we're done." "I do love you" he says again with real intensity. "And love can make a man do foolish things."

She resists the opportunity to mock him, but he reads it on her face. He doesn't like it.

He's angry now, looming over her. "When you come back to me... WHEN, not if... I will not be as gentle on you as I was. I won't let you take advantage of me again."

"Threathning me isn't going to change anything." She's made up her mind. Unsurprisingly (but still troubling) is the fact that his threats are turning her on. Enough that she's having a hard time focusing.

"I'm not threatening you. I telling you facts." He looks like he's about to attack her, but he contains his rage (barely). "And the facts are that I love you and I will do anything - ANYTHING - to get you back."

"Anything except treating me decently," she manages to say (while images of him degrading her and making her climax play through her head). It's enough, though. He storms out.

"Have a care Ephedrina. I will collect you... and you will pay." Will he collect her? Time will tell.

She tries to sleep, but the lack of a collar and piercings and restraints... they make it hard for her to fall asleep somehow. Eventually she strips naked in her bed. It helps and after a while she passes into a troubled sleep, dreaming of the man she just spurned.