During Leandra’s journey through Skyrim a courier tracked her down and gave the Breton woman a letter from Delphine. In it the Blade explained that Leandra had to get in the Thalmor Embassy in order to know where the dragons are coming from. In her letter she also told Leandra that she was to meet an informant of hers in the Winking Skeever in Solitude. 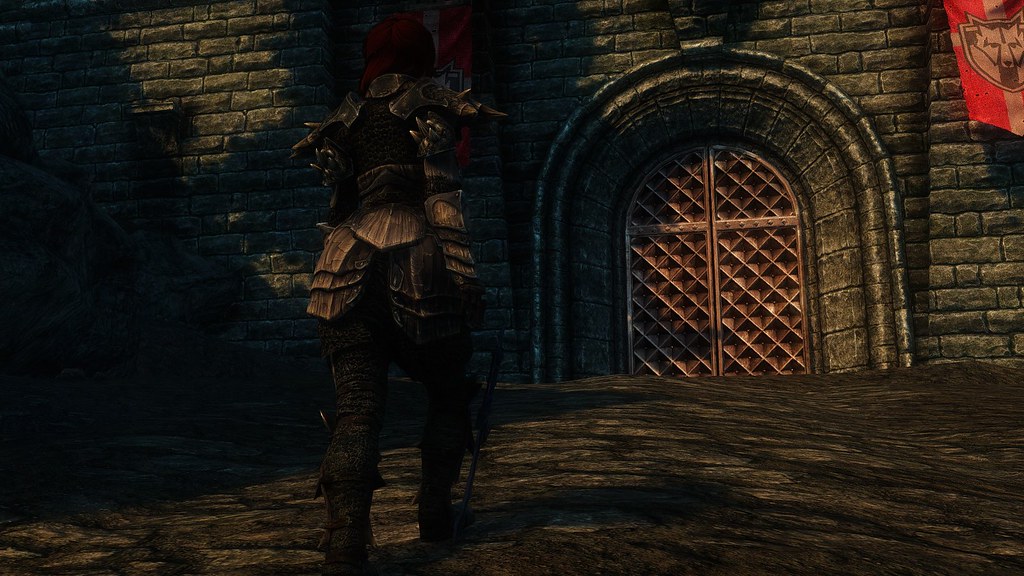 After a few days Leandra arrived at the capital of Skyrim and entered the inn. 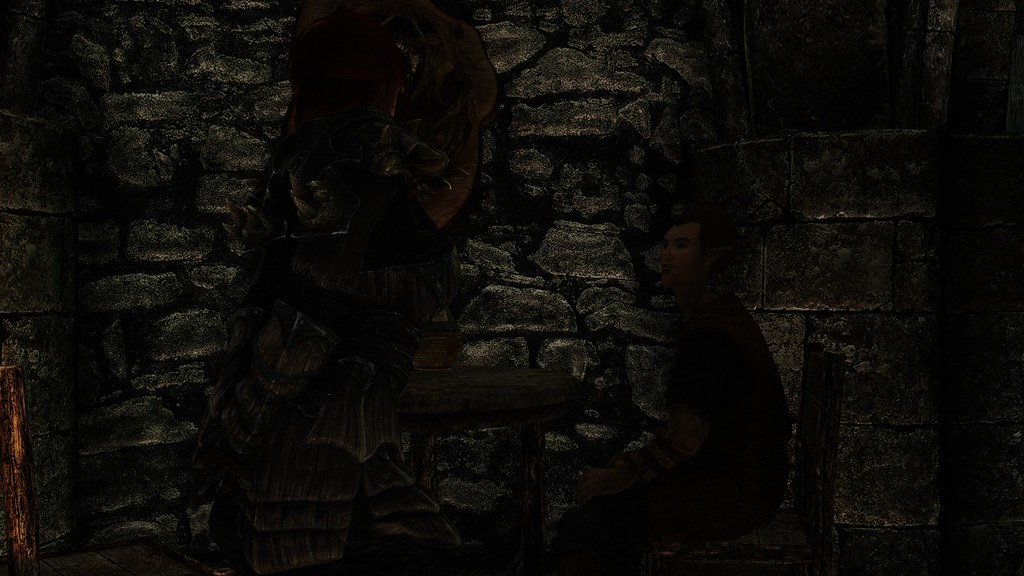 In it she found a nervous Bosmer sitting at a table.

“Are you the one who works for Delphine?” Leandra asked him.

“Y-yes. Are you the Dragonborn? I somehow imagined you to be more threatening.” He said and looked around if anyone could hear them talking.

“I am. So, what do you need from me?” The red-haired woman asked.

“I can smuggle the most essential of your equipment in the Embassy. You just have to give it to me.” The Woodelf answered.

Leandra sighed but gave her armour, bow and dagger to the Bosmer. “If you lose anything, I’m going to rip you apart.” She threatened him before she went to the meeting point with Delphine. 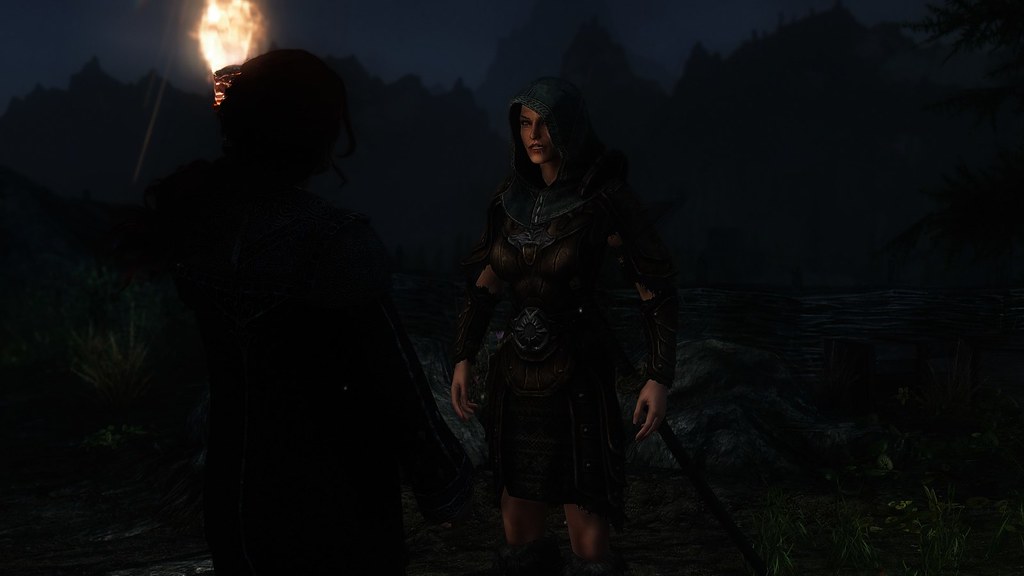 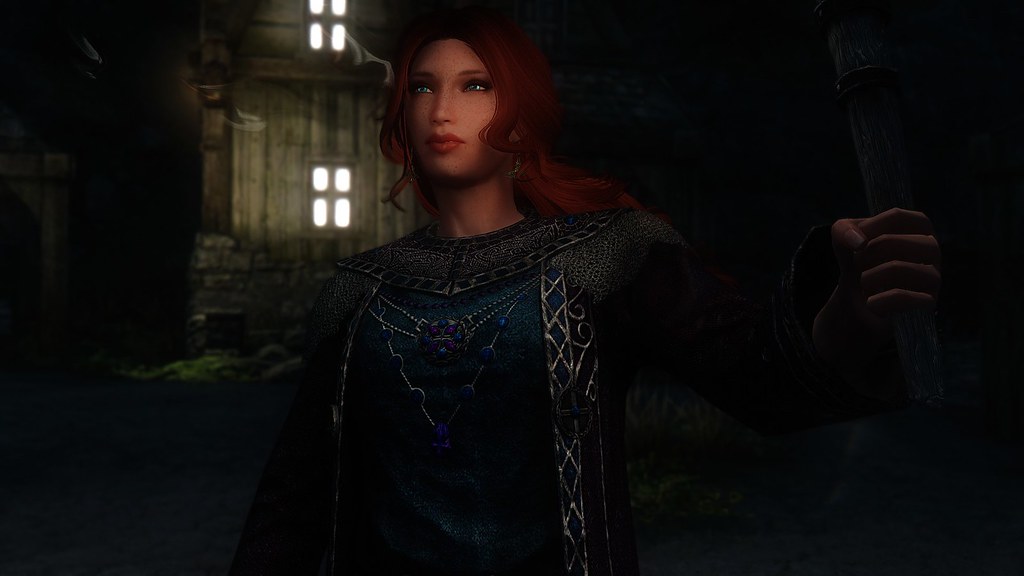 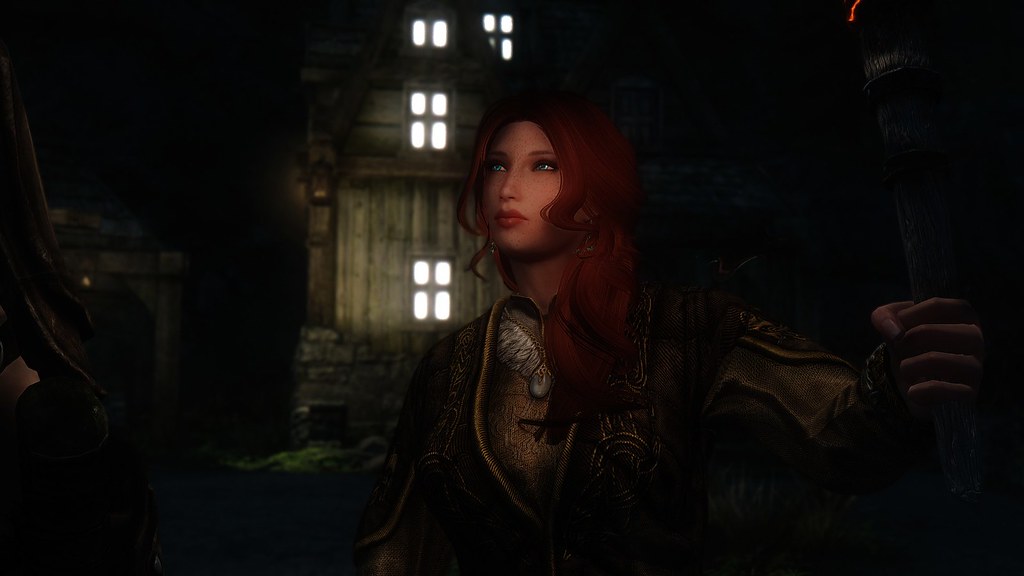 At the stables the older Breton already awaited Leandra.

“Is everything ready?” Leandra asked.

“Nearly. First of all: That clothing you’re wearing is too noble. Wear this one instead.” She said to the red-haired woman. “And here’s your invitation. You need to get some kind of distraction once you’re at the party. Search for anything that could lead to a new clue in our cause.” She told her before she accompanied Leandra to the carriage. “Good luck.”

The Dovahkiin then climbed on the carriage and drove to the Embassy. 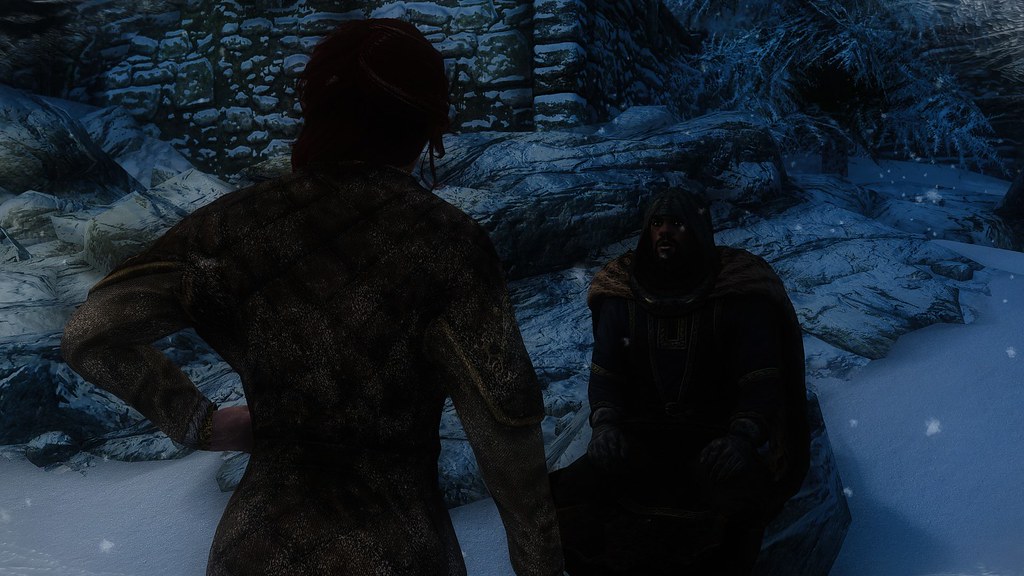 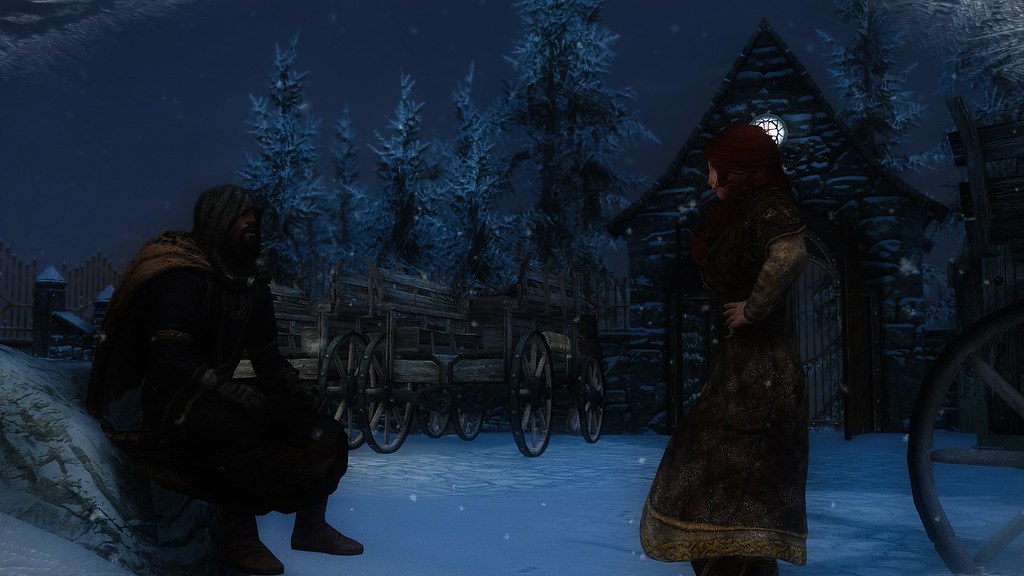 As she arrived at the Embassy, Leandra met a Redguard who didn’t seem to be keen on entering the headquarters of the Thalmor.

“Greetings. You also seem like you don’t belong here.” Leandra began to speak with him.

“No. I’m a merchant and I’m just here because I have to ensure that those elves don’t boycott my wares.” He told her with a grim smile on his face.

“And I’m here because they wanted to see the new Second General. Hypocrites. They want to see their new enemy, but enough of that. I’m getting cold. Until we meet again in the Embassy.” Leandra said and winked at the man in front of her, before she left. 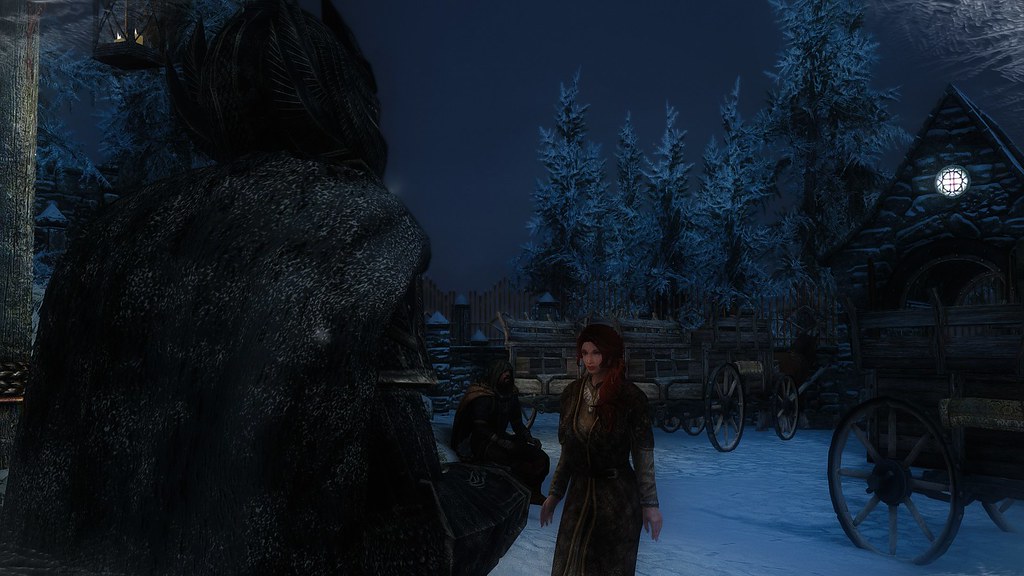 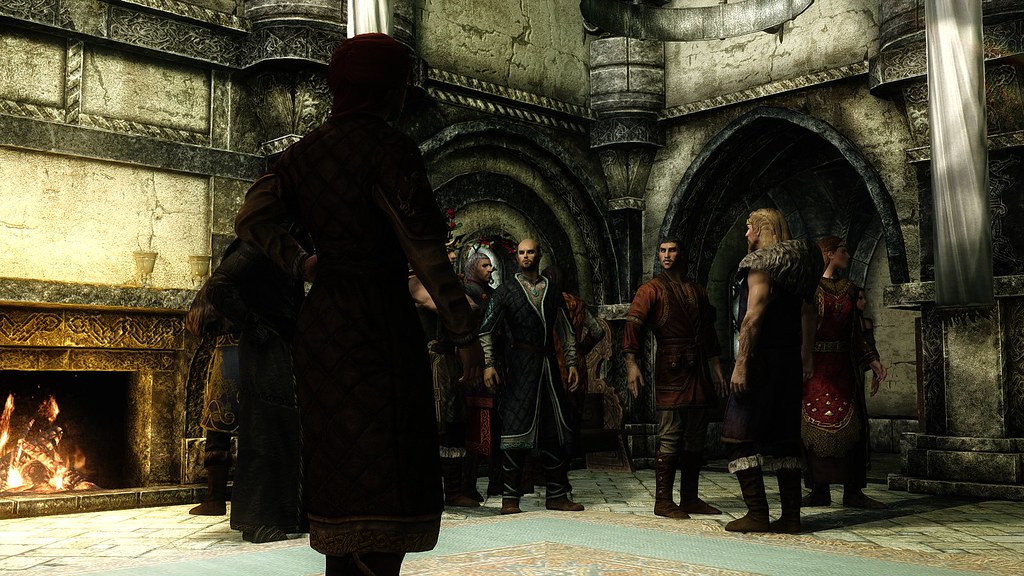 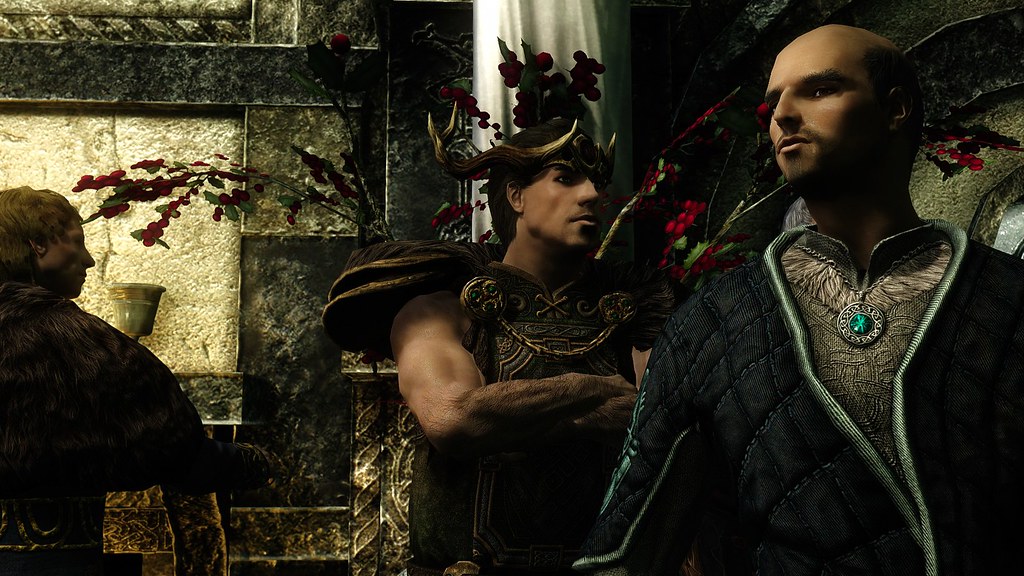 After she entered the Embassy and greeted the Ambassador, Leandra looked around if she knew anyone who attended the party.

Suddenly her blood turned to ice as she saw the Jarl of Falkreath in the crowd. 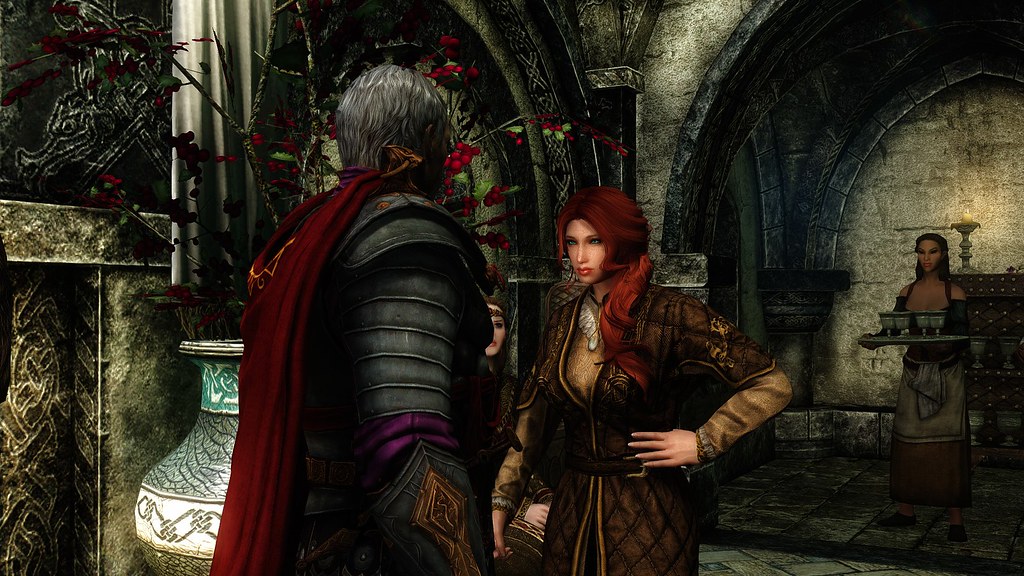 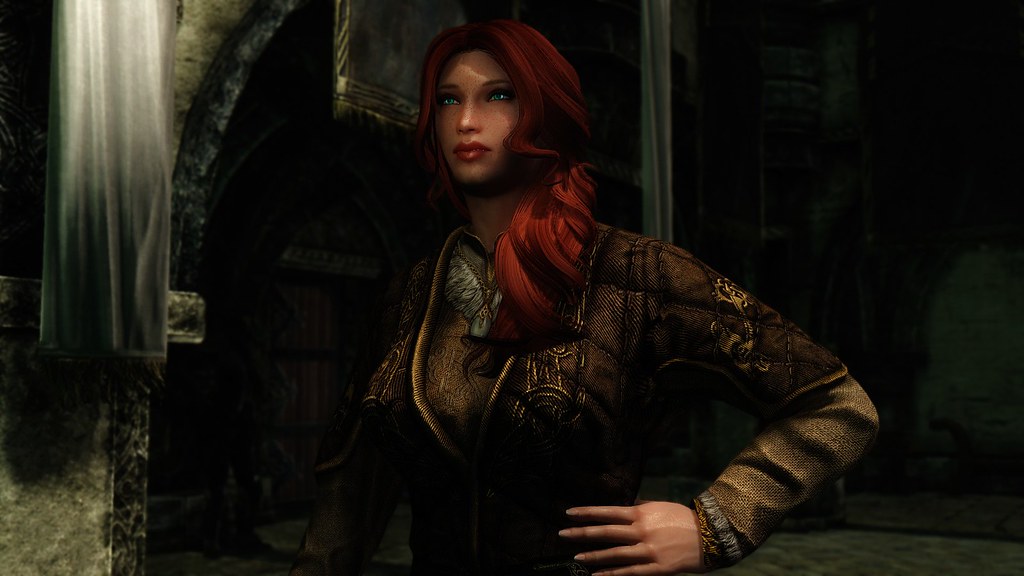 But then she saw General Tullius and had someone to talk to.

“I see that you are cured, Leandra.” He said after they greeted each other.

“Yes. Thank you again for making me suffer and being raped by the hands of the Vigil for something I didn’t have a problem with.” The red-haired woman answered sarcastically.

“They did?! I’m sorry. I thought you were infected by a feral vampire and were too proud to seek help.” Tullius said shocked.

“I wasn’t. Nice talking to you.” Leandra said in disgust and walked to the Redguard merchant she met earlier. 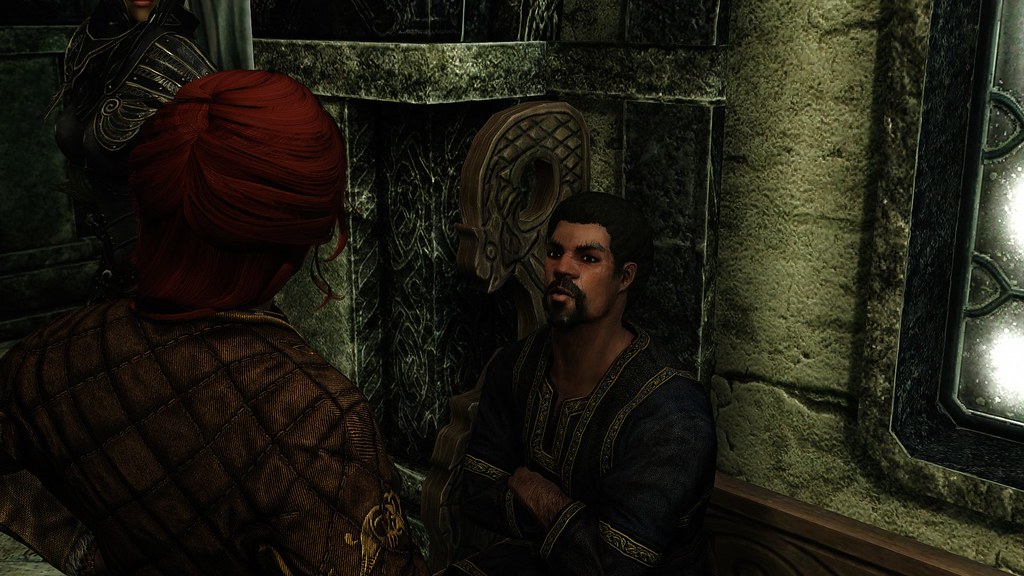 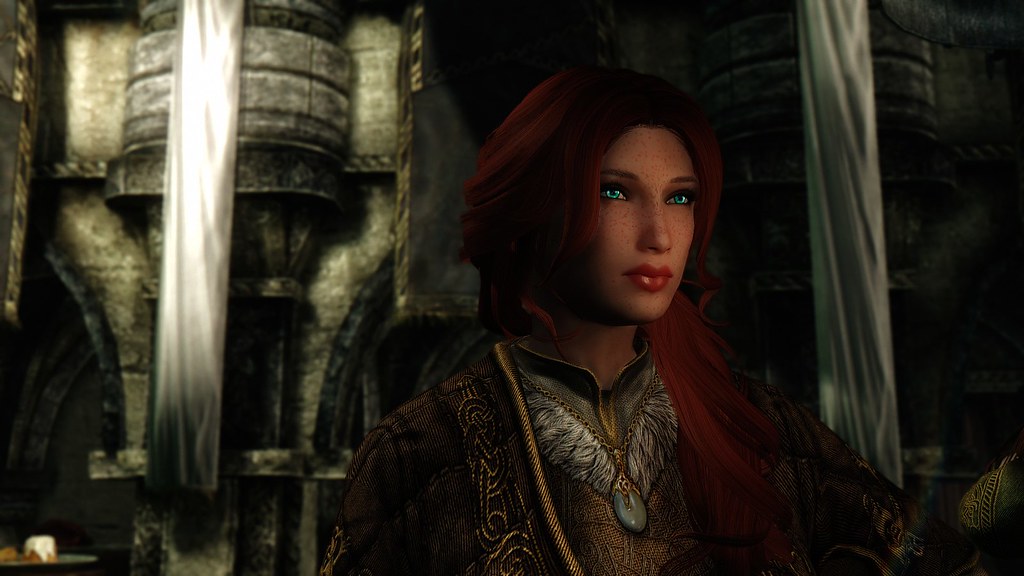 “Hey! Do you think you could help me out?” The Breton asked.

“Depends. What do you need?” He asked her curiously.

“I need a distraction so I can leave this party.” Leandra said with a smile on her face.

“A distraction you say? Get me a drink and they’ll be distracted that much that they wouldn’t notice if a dragon appeared behind them!” He chuckled. 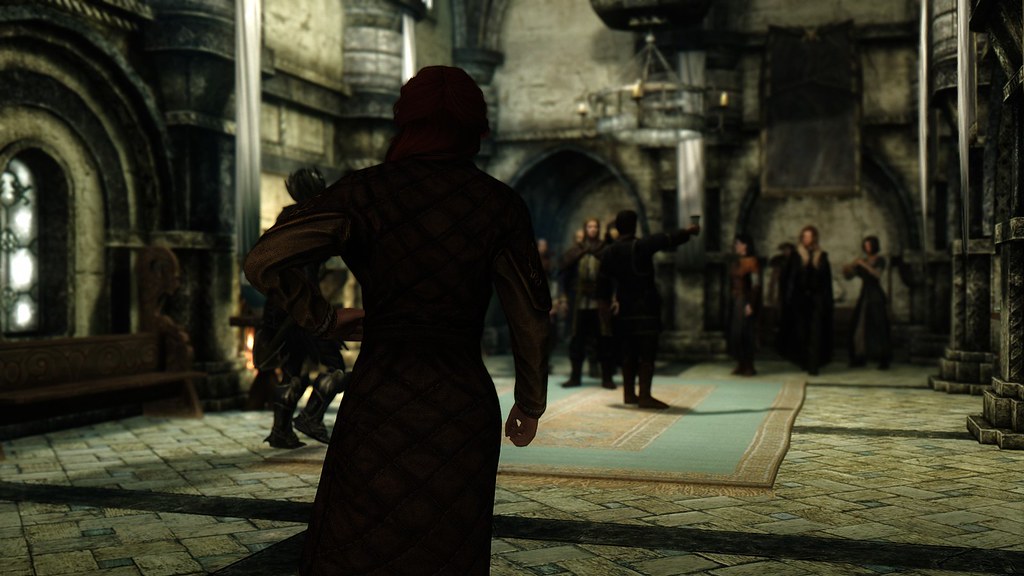 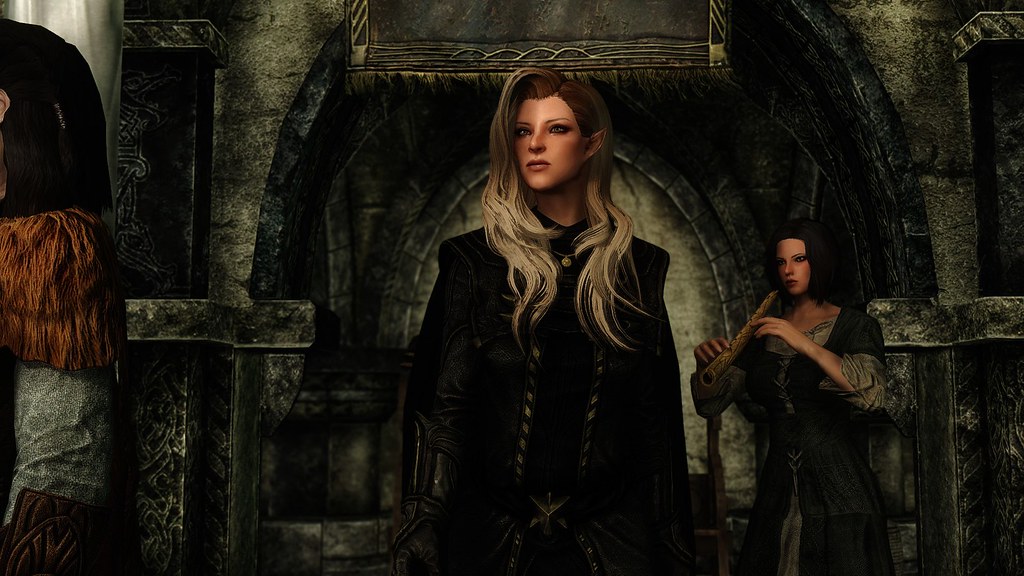 As soon as the merchant got his drink, he began his distraction with a toast to Elenwen, but it wasn’t one of the nice sort. 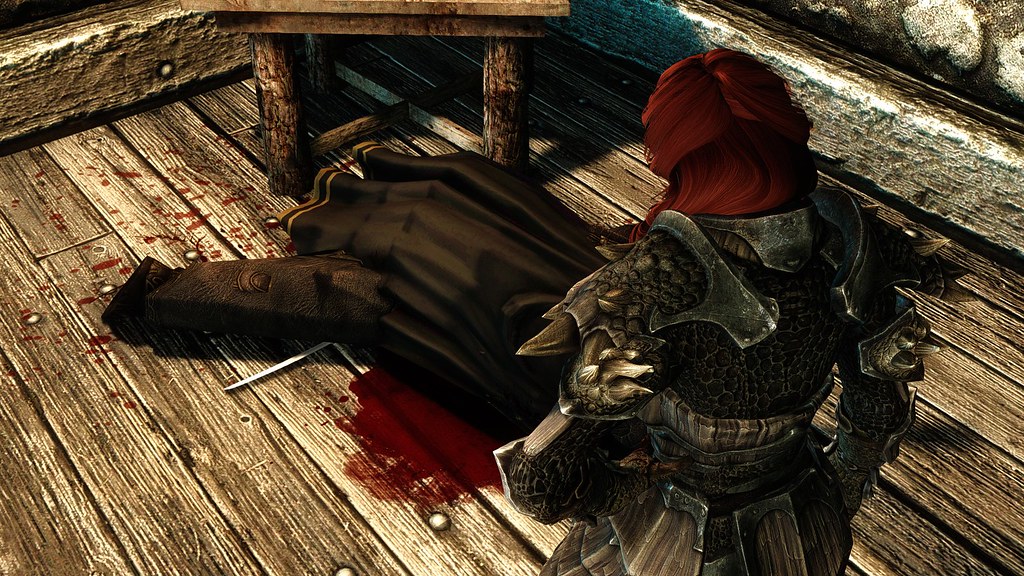 Leandra seized the opportunity and slipped away as no one was looking and retrieved her gear. She sneaked her way through the Embassy without slaying anyone, but as she arrived at the prison some guards noticed her.

The Thalmor were taken by surprise and also drunk, so he didn’t stand a chance. Leandra searched his corpse and found some notes that the Thalmor didn’t know where the dragons came from, but that they heard of an old blade who hid somewhere in Riften. 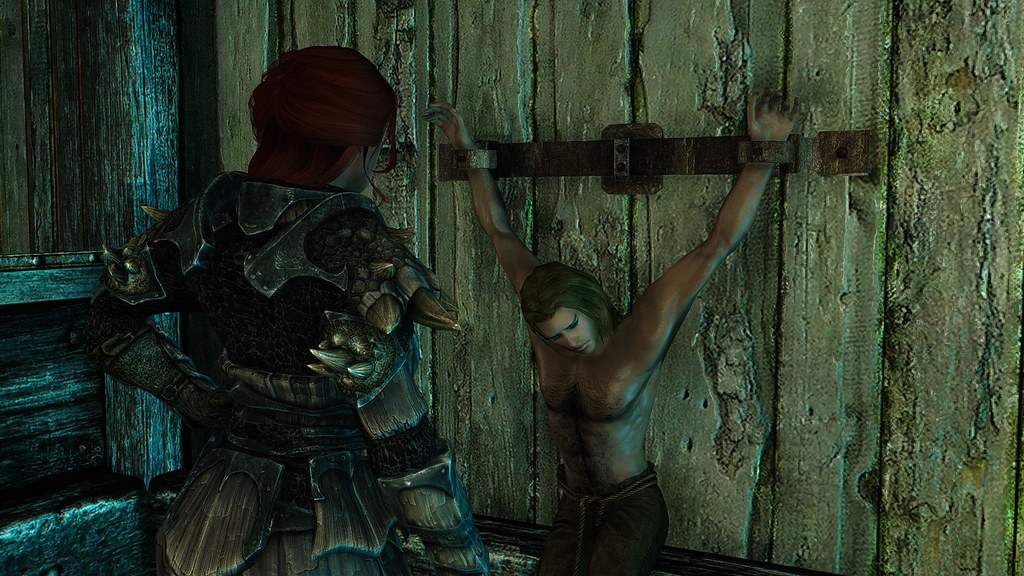 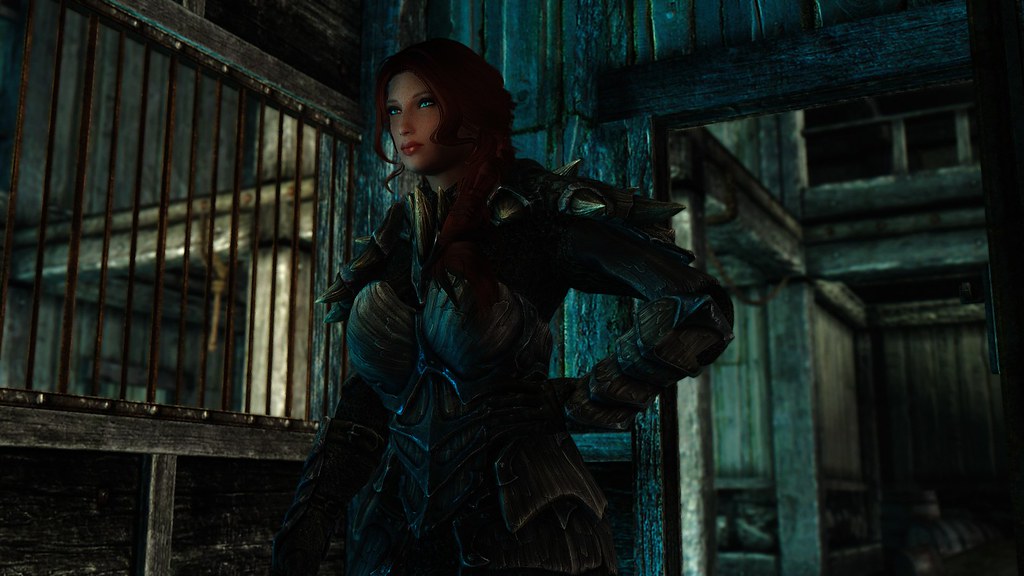 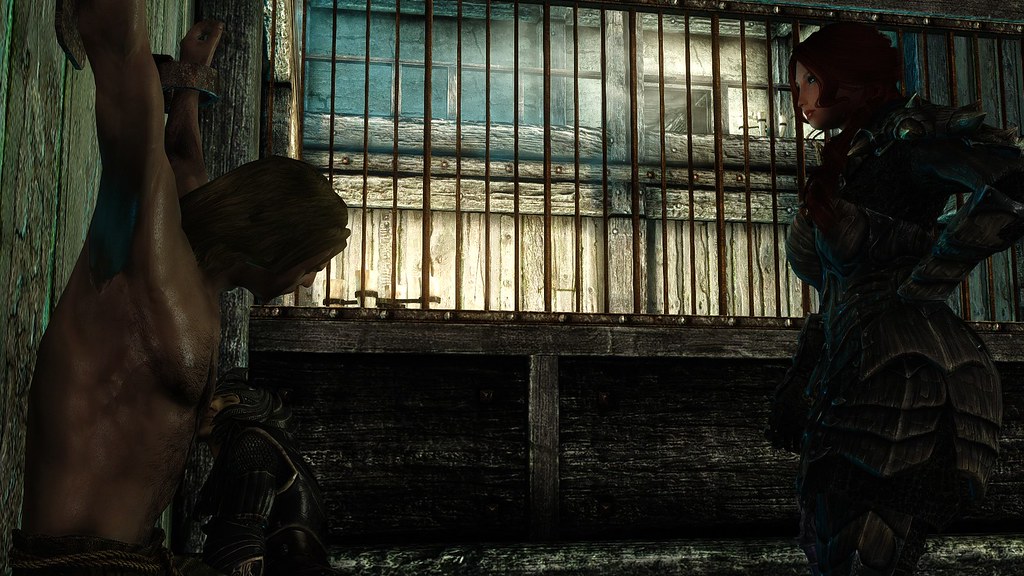 As Leandra looked around, she found a prisoner shackled to the wall. “Do you know something about an old man hiding in Riften?” She asked him.

He looked up before he answered. “No. I think you already read their notes. I just know he hides in the Ratway. Please help me. They will kill me.” He pleaded in fear.

The red-haired woman nodded. “Very well. But don’t tell anyone I helped you or it will end badly for you.” She said as she released him.

This entry is just used as a "bridge" to connect this story with the next few entries which will be better and longer. Nonetheless I hope you enjoyed this entry.