Hi there Nymph Lovers!  I've got some good news and bad news today.

The bad news is that I spent an awful lot of the last week and a half doing productive stuff that isn't fun to look at.  Things like fixing bugs (a lot of bugs), standardizing and organizing file structures, and optimizing textures, etc.  All stuff necessary for finishing the mod for release, but boring to read about.  One thing though is that during the frustrating process of getting a racemorph .tri to work with chargen .tri morphs I actually think I came up with a solution that will prevent any major issues like this from getting in the way in the future.

So the good news is that I've finished the Blended Nymph!    I'm quite pleased with how the Blend Nymph presets turned out too.  Like the Desert Nymphii, I built the first preset which I used as the racial .tri shape pretty much from scratch, rather than from one of my old characters.  That means the only race left to go is the Beast Nymph, then final testing and balance stuff, and it's ready to release!

The major issue with the Beast Nymph is that I want to be able to include a sliderset for different beast race parts that you can pick from.  So if you are an Argonian Beast Nymph you can pick no features, scales, tail, or both, and khajiit beast nymphii can have ears, tail, fur, or some combination of the three (maybe even pick lizard tail and cat ears if you're feeling really adventurous).  The problem isn't so much if this is possible, it's not simple but I know a couple ways to try to implement it.  The problem is I have no idea how to do this without a heavy script package that loads these parts as armor addons from a transform, a spell based config tool or skyui mod menu.

I'm pretty sure there's a way to do this with an overlay slider, a simple mesh slider (like a pubic hair mesh) and a funky skeleton rig but I'm gonna have to spend some time figuring out how to go about it.  At this point I really want to complete this mod without using any scripts.  If anyone who reads this blog has some advice I'm open to any input you can offer!

I do have some stuff to show off though, so enough development stuff, here's the Blend Nymph! From the in-game description

A blended Nymph is a Nymph whose ancestors have mated with enough different species of males that they lack particular distinct characteristics of any nymph subtype, being blessed with a mixture of minor magical traits.  Besides possessing inhuman Nymph beauty, Blend Nymphii are virtually identical to mortal races in appearance, and many live secretly in mortal society.  Some may even be unaware of their true nature and simply believe themselves mortals that are "special" or "gifted" in some way.

They have as their racial trait a mild boost to just about everything: minor resistances, a little bit faster health/stamina/magicka regen, and of course the universal Nymph damage resistance.  The overall theme here is that they represent the most complete dilution of magical essence that Nymphii obtain from mortal males, looking and acting for the most part like mortal women.  They are the only Nymph race that has an armor skill as a racial bonus, and unlike just about every other kind of Nymph imaginable, they don't have an instinctual tendency to go prancing around naked wherever they travel.

That's not to suggest they are less sexual than other Nymphii however.  Most other Nymph subtypes would be considered "hyper-sexual" by human standards, with the catch being that they are extremely selective in choosing mates.

Blended Nymphii share this same superhuman drive, but do not possess nearly as much selective instinct.  A quirk of the Blended Nymph pedigree means that just about any male she chooses will contribute positively to the magical energy of the offspring, there are no wrong choices!  Add this to the fact that they will very often live within human or mer society, and well... you can probably guess the result: adventures that might make a succubus blush!

Here are a few screenshots of the five Blend Nymph presets 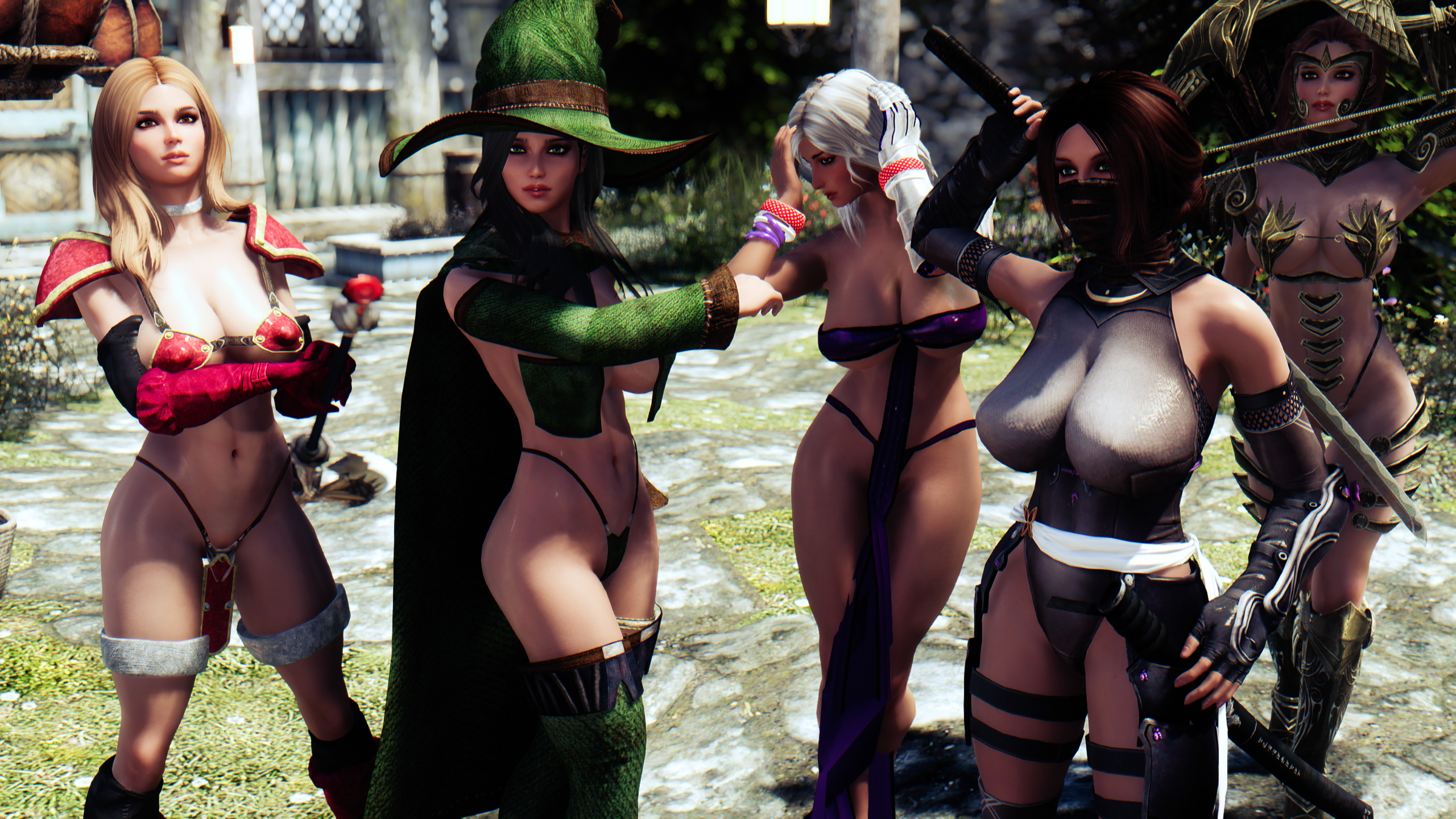 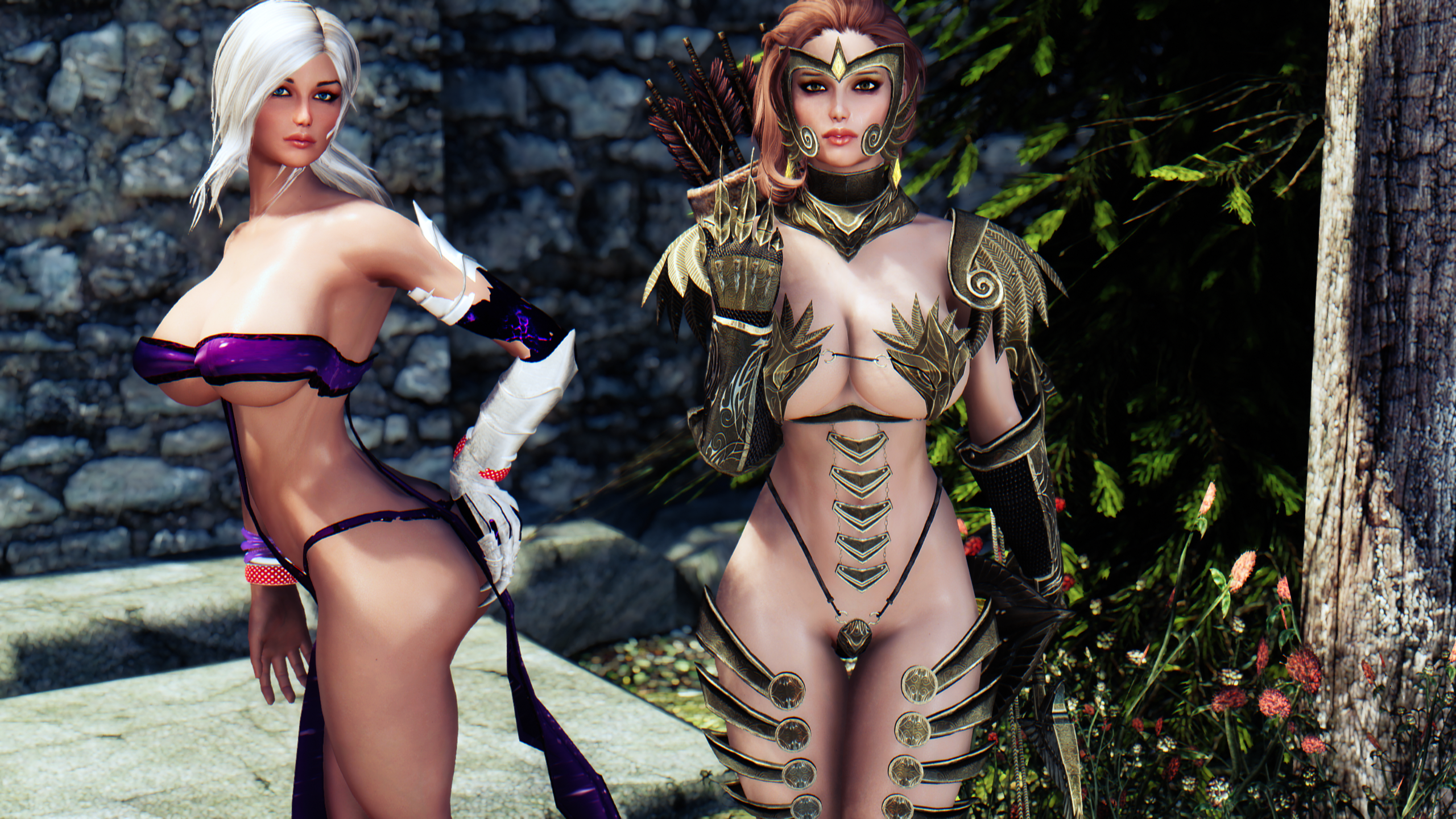 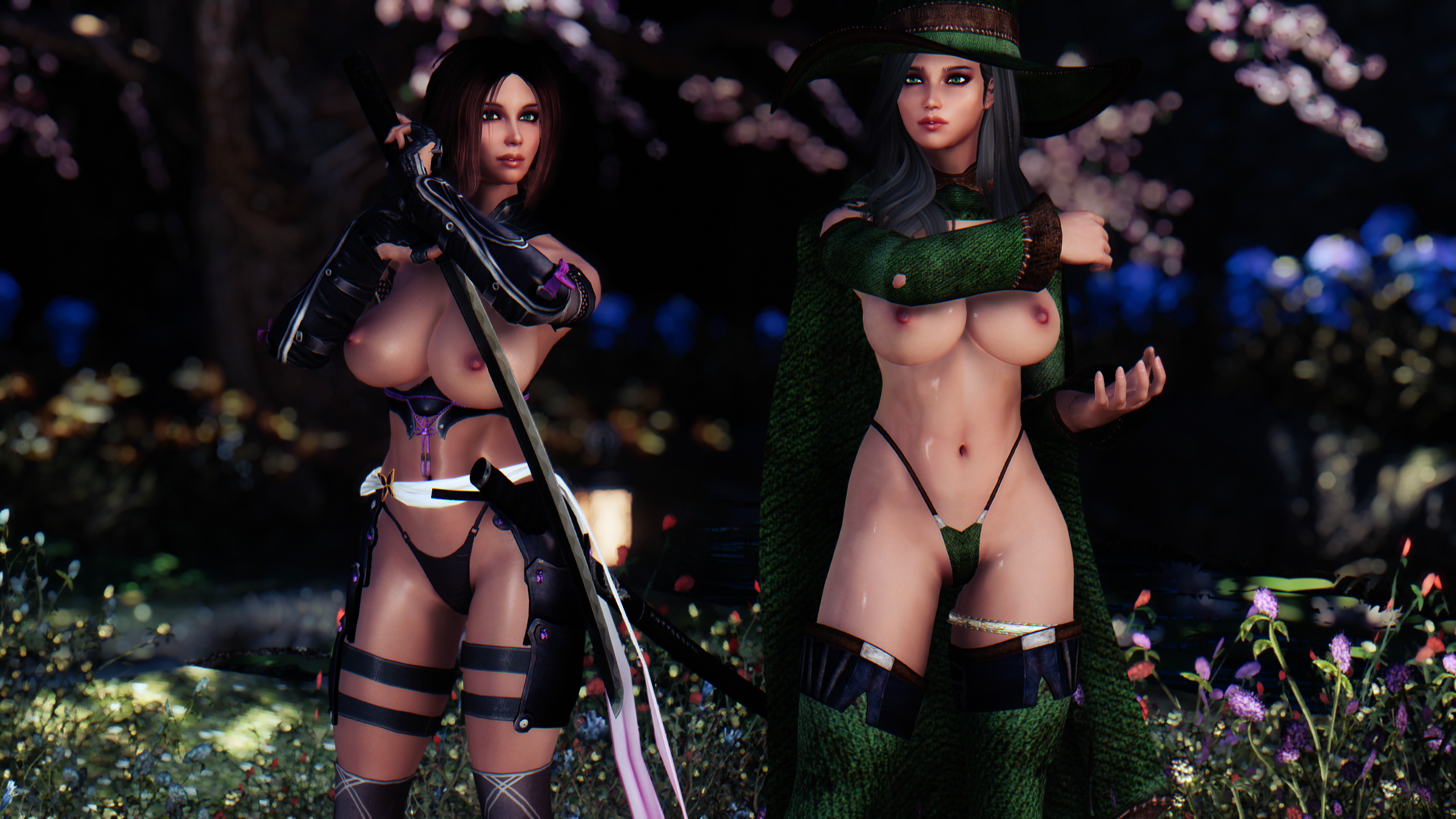 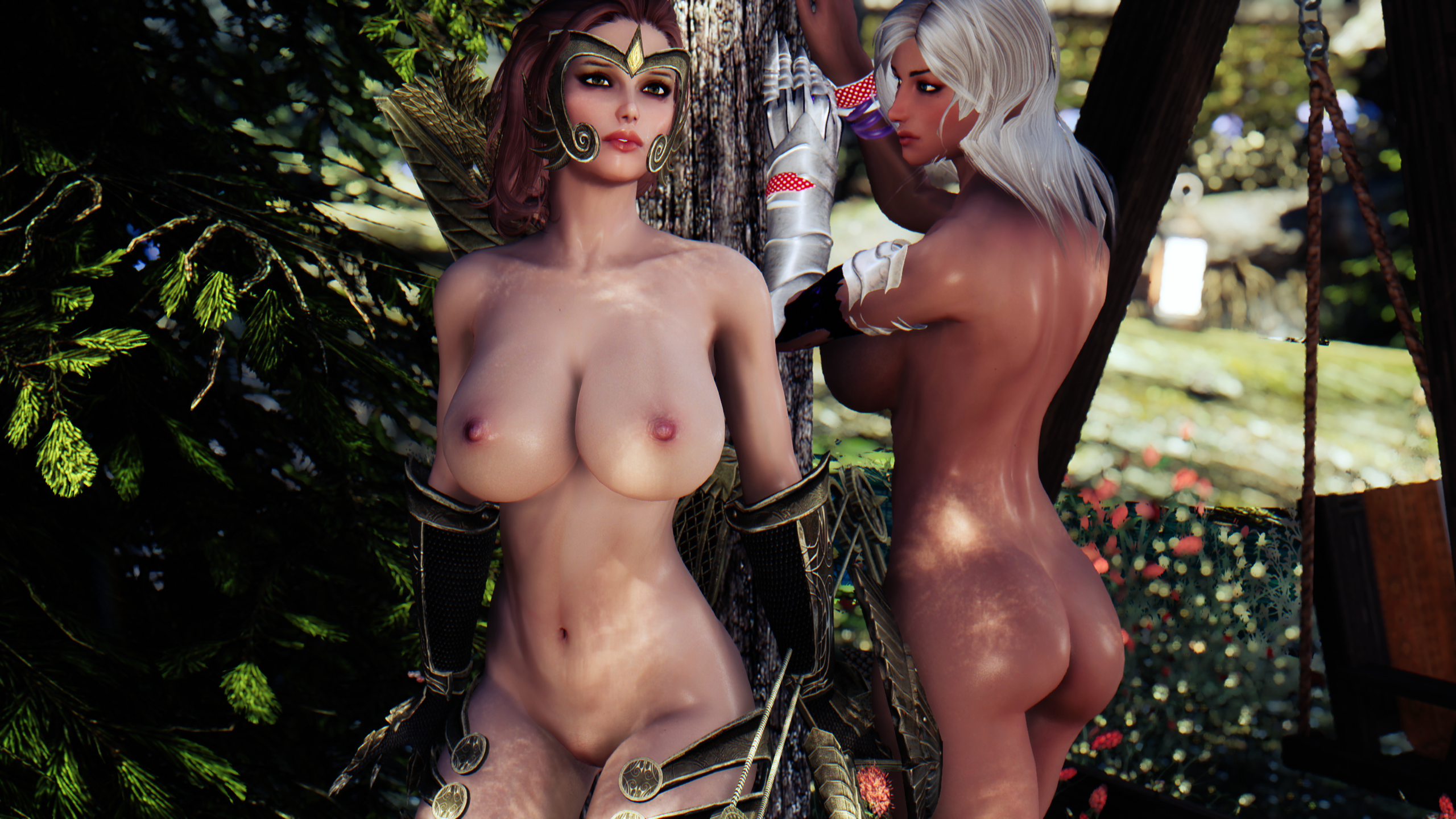 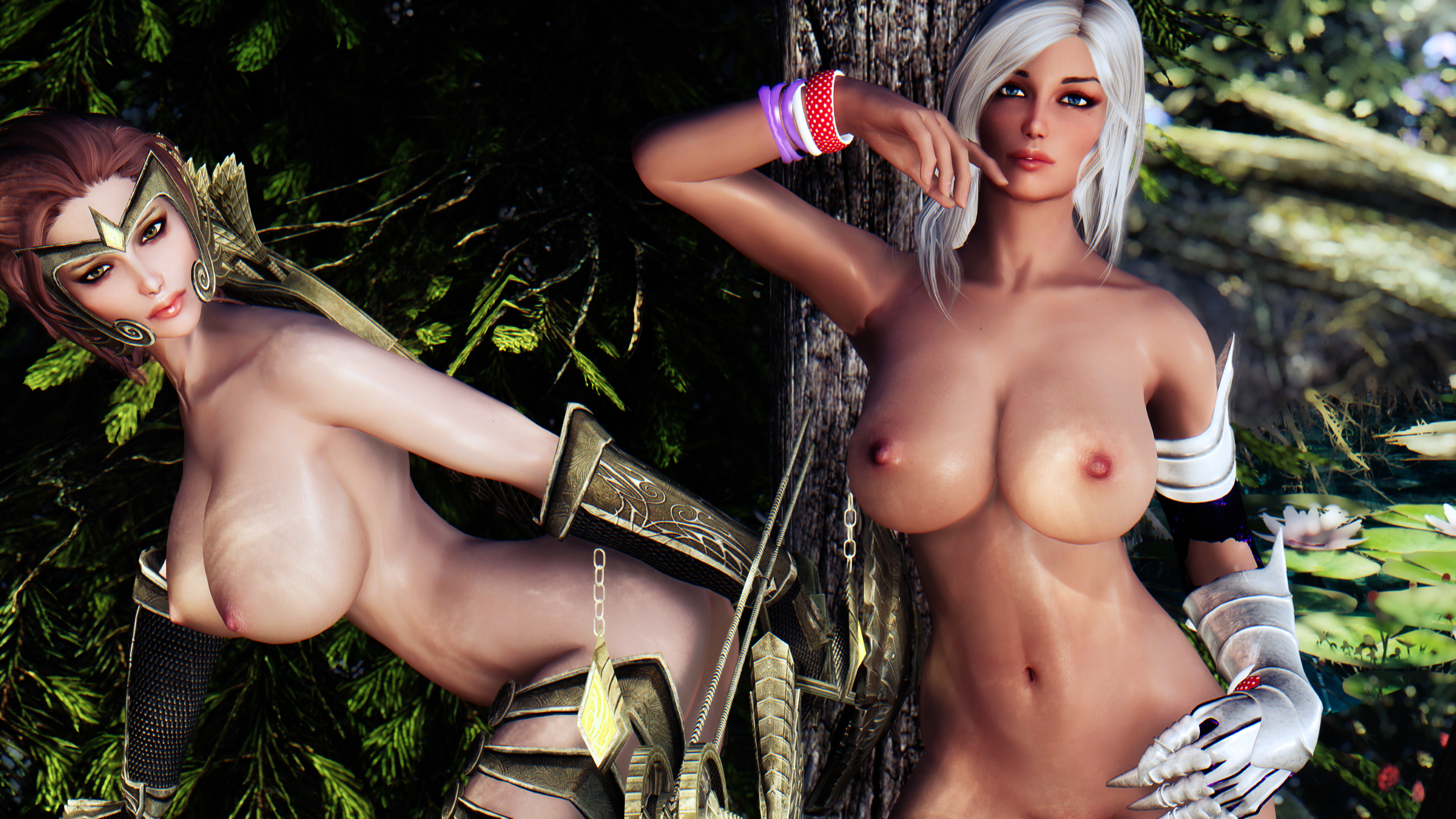 As range of outfits shows, they are equally likely to be skilled at magicka, fighting, or thieving.

(Total of 50, higher than the rest due to lack of any starting combat stats)

My overall goal was for them to be approximately 10% better than vanilla races.  At this point in the game's lifespan I'd say it's pretty unusual to imagine someone playing through for the first time, and Nymphii balance the bonuses they get against having no racial once a day powers.  I would probably suggest playing on one difficulty setting higher if you play a Nymph though.

With that said, and in the spirit of old-school daggerfall which let you built crazy powerful characters with the tradeoff that they level much slower or have to take on tons of drawbacks, I'm currently considering giving the Nymphii more powerful stats/abilities in exchange for giving them a racial penalty on all experience gained.  It makes sense thematically, immortal magical creatures probably don't focus and learn things the same way as mortal creatures who are faced with life and death situations and a finite lifespan.  It would also explain why the Nymph followers who are in the range of centuries old are likely to show up in your game as a level 15-20 warrior or spellcaster.

The estimate I would say at this point is about 20% slower skill gains so you can't quite make up the difference with the lover's stone.  I know one of the things that some people complain about after multiple playthroughs is that leveling is too fast compared to oblivion or morrowind, so maybe this would be a way to solve that problem too.

Anyway, I know this entry has been mostly words so far and not many pictures, but don't fret!  Just like the last entry, I gathered up all the girls and had a big group photo session so you can see the scale of what I've made to this point. 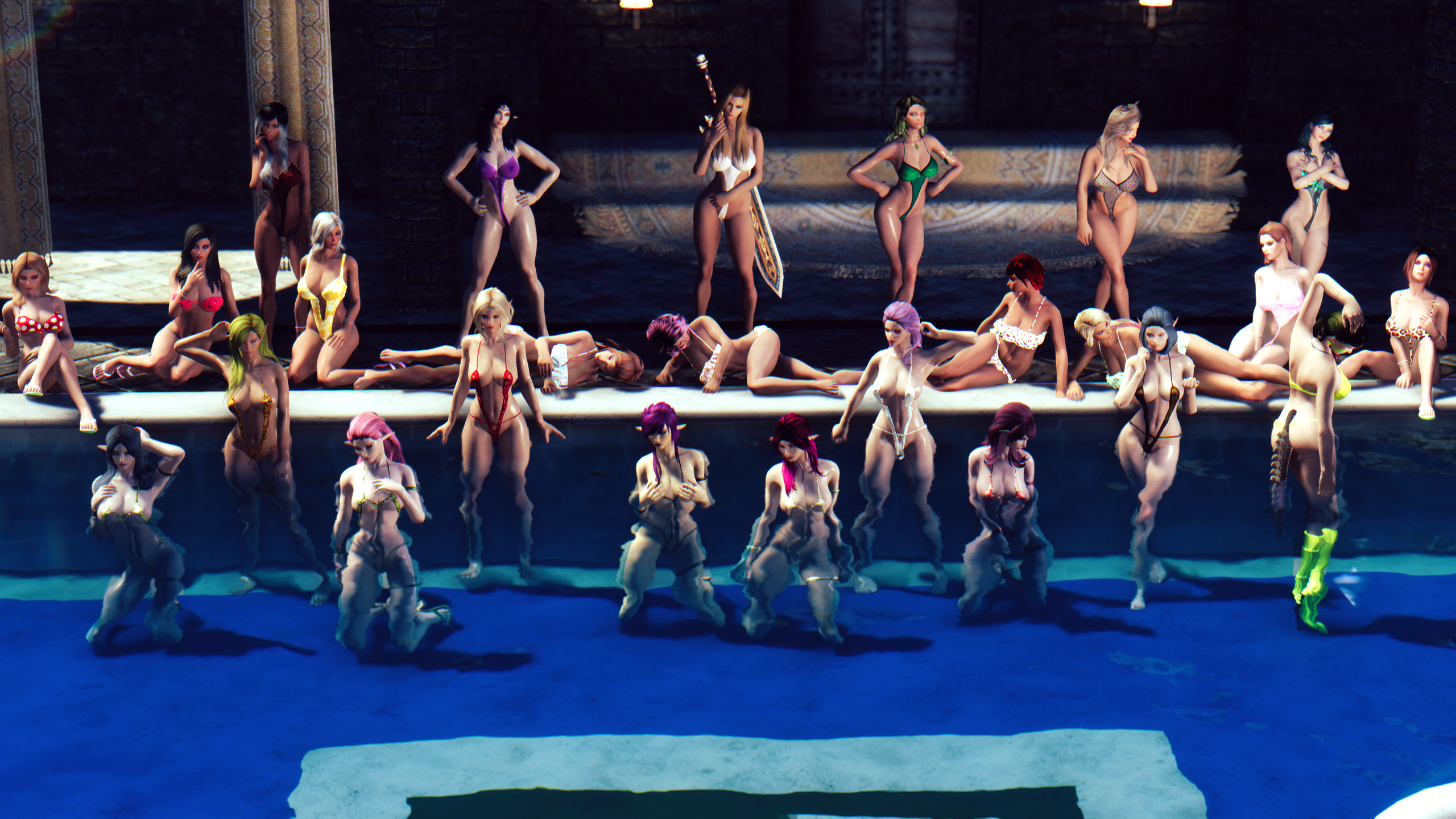 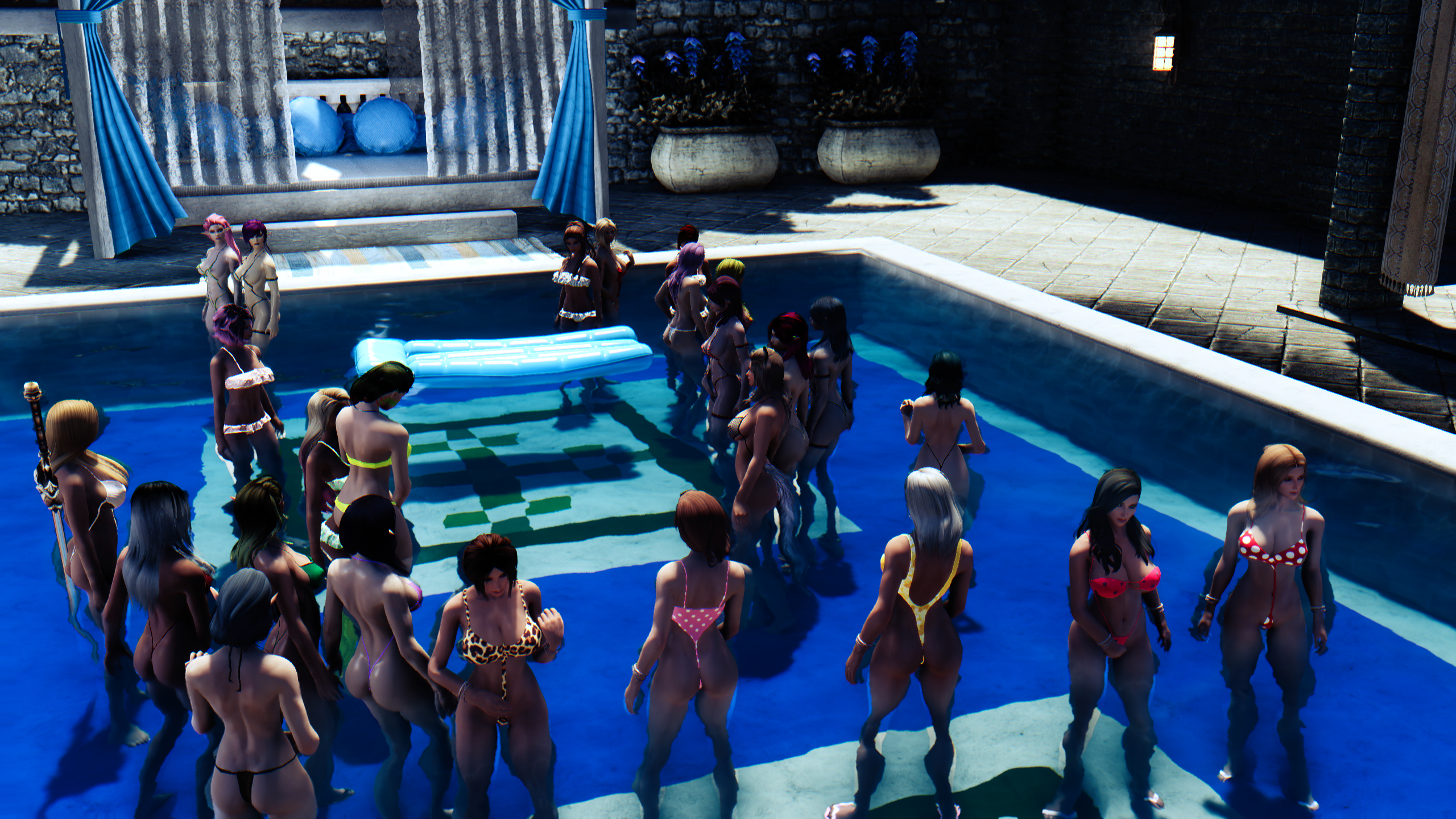 I've also gotten around to naming all of them and giving them proper NPC settings (though lacking the custom classes and powers of the Nymph followers), so if you want to run the mod just to build your own Nymph Harem it's certainly possible: there are currently 24 different girls and I plan on making at least four or five more Beast Nymph girls, so close to 30 total.  I managed to give each one a unique haircolor, weight, hairstyle, eyecolor and combination of makeup so far.

And as a little update from the last entry, I managed to edit and re-upload the Wood Nymph MMD I made and so far youtube hasn't flagged it yet.  There's about 20 seconds less nudity than the original, but I got some very nice lighting, cleaned up the editing a lot, and I think it's overall a lot better.

Well, that's all for this entry.  I'm getting really close to wrapping everything up and I hope you look forward to it!