Though I have seen way more offensive things on LL, this one might be a bit too much for some. Viewers discretion is advised. Btw there's a gif link in there somewhere. If you like something like that tug in with picture, let me know. If not, then less work for me.

Vincent: Wasn't close enough to tell, maybe as big as a castle?

Gerdur: And yet you still venture into Helgen? Vincent, I can't thank you enough for saving my little brother. Without you, Rolaf...he...

Vincent: Its no big deal, I was just loot king, looking, for survivors there anyway.

Hod: Such a brave young man, the world need more heroes like you!

Hod: A toast! To the Hero of Helgen!

Gerdur: I think he had enough dear. Lets not forget, he have to wake up early tomorrow.

Gendur: You two finish your meal while I go prepare the bed.

Gerdur: I'm sorry Vincent, I know it's wrong of me to ask this of you, but the Jarl need to know as soon as possible.

Gerdur: Is the bed okay? Too little, too much hay? Do you need another pillow? Maybe some more blankets?

Ralof: Hey, if the royal highness is displease with the bed...I...I'll gladly take it from you.

Gerdur: Don't mind him, he had too many drinks.

Ralof: That man...! He try to sell me pussy juice...PHUSSY JUICE! 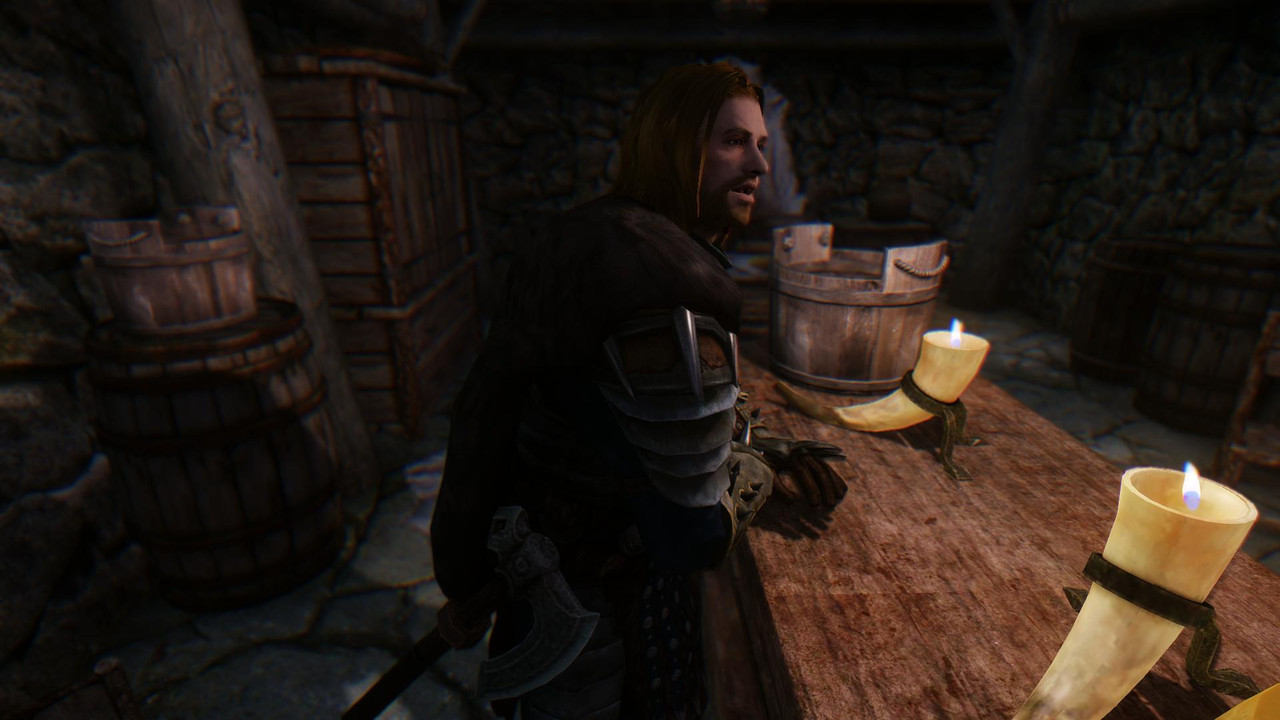 Gerdur: ...Anyway, if anything I can do for you, all you have to do is ask.

Vincent: No, I think a good sleep is enough for now.

Gerdur: It has been a rough day hasn't it...? Okay, I will  leave you to rest then. Good night Vincent.

Gerdur: Hod... If you don't stop that right now...I'm going to kick you off the bed.

Vincent: The other bed is too small, so I thought you wouldn't mind if we shared this one.

Vincent: Kill me? Yea, I know.

Vincent: But you wouldn't let me die right...? The man that saved your brother, the man that will be making a tedious journey for you tomorrow?

Beside, didn't you said you'll do ANYTHING for me? A man have needs you know.

Vincent: Nah, it's cold out there. Aren't we already comfortable here?

Vincent: Yea, and the more you talk and squirm around, the more likely he'll wake up.

Vincent: Fine by me.

Gerdur: Hey...you're sure that no one else is awake right...?

Vincent: Yea, your son and brother are still sleeping.

Vincent: Did anyone ever told you that you have a really nice butt?

Gerdur: Stop lollygagging and put it in already...

Vincent: As you wish.

Vincent: Sh...You wouldn't want him to hear you moaning in ecstasy...would you?

Vincent: Oh really? Guess I have to make it up in techniques.

Vincent: Oops, a big girl wetting her bed, I wonder how you going to explains to Hod tomorrow.

Gerdur: Who is enjoying this?!...You forced me...there isn't anything I can do about it....

Vincent: Still being dishonest I see. Don't worry, I'm about to make you feel a whole lot better.

Vincent: What? You can't even look him in the face while you're fucking another man?

Vincent: Then tell me honestly, whose dick do you like best?

Vincent: Whose would you rather have, stirring inside you right now?!

Vincent: Whose cock is it, that you can no longer live without...?

Gerdur: But I think I've fallen for his cock!

Vincent: The night is still young, shall we go again?

Hod: Have a safe trip!

Vincent: I will, you two take care also.

Gerdur: Come by for a visit when you're in town.

Gerdur: You can come anytime...