Hmm...story isn't meant to be taking seriously. I'm just doing whaterver I want with this one. I could make alien invades skyrim and the only thing that could save the world is a holy penis if I want to O_O. Oops spoiler?


As I descended further down the bowel, I notice a breeze from ahead. Guess there is an escape after all.

Upon entering the cavern, I found two men, badly wounded but alive.

Instinctively, I ran over to the one nearest to me. He wore fancy armor of a Stormcloak, probably of high ranking.

Vincent: You alright? Can you stand?

Vincent: Stay there, let me check on the other guy real quick.

Vincent: Hey! You good over there?

Vincent: Hold on, I'm heading over.

Vincent: Any last words you want me to pass on to your love ones?

Vincent: Oh, you're holding your stomach. I thought you got stab or something.

Vincent: In matter of fact I do! This is a bottle of Snow Elf's juice, contains the magical property of rejuvenation.

Vincent: Uh no. That's not how economy works.

Vincent: But you told me you only have a broken leg.

???: Just shut up give me the fucking potion already!

???: I really thought that cave was going to be the last thing I saw.

???: Damn, that potion was really something, I feel like a new man! I would have been a goner without your help. I am in your debts.

Vincent: Hell yea you are.

Ralof: Anyway, I'm Ralof. My sister runs a mill in Riverwood. Whatever the cost of that potion was, I'm sure she can help you out.

Ralof: We're not in Stormcloak territory, so just let me handle the talking.

Gerdur: What happen to you? I heard Ulfric was capture, surely I thought you...

Gerdur: And who is this, your comrade?

Hod: Ralof, what are you doing here?!

Ralof: Where do I even begins... To starts, the rumors you heard of Ulfric were true, they ambush us outside of Darkwater Crossing...

??: You've been stuffing those damn sweetrolls at night havan't you?

??: But sis, I must avenge all those sweets she murdered to get this!

????: Just let them have their fun, not everyday the water is this nice. 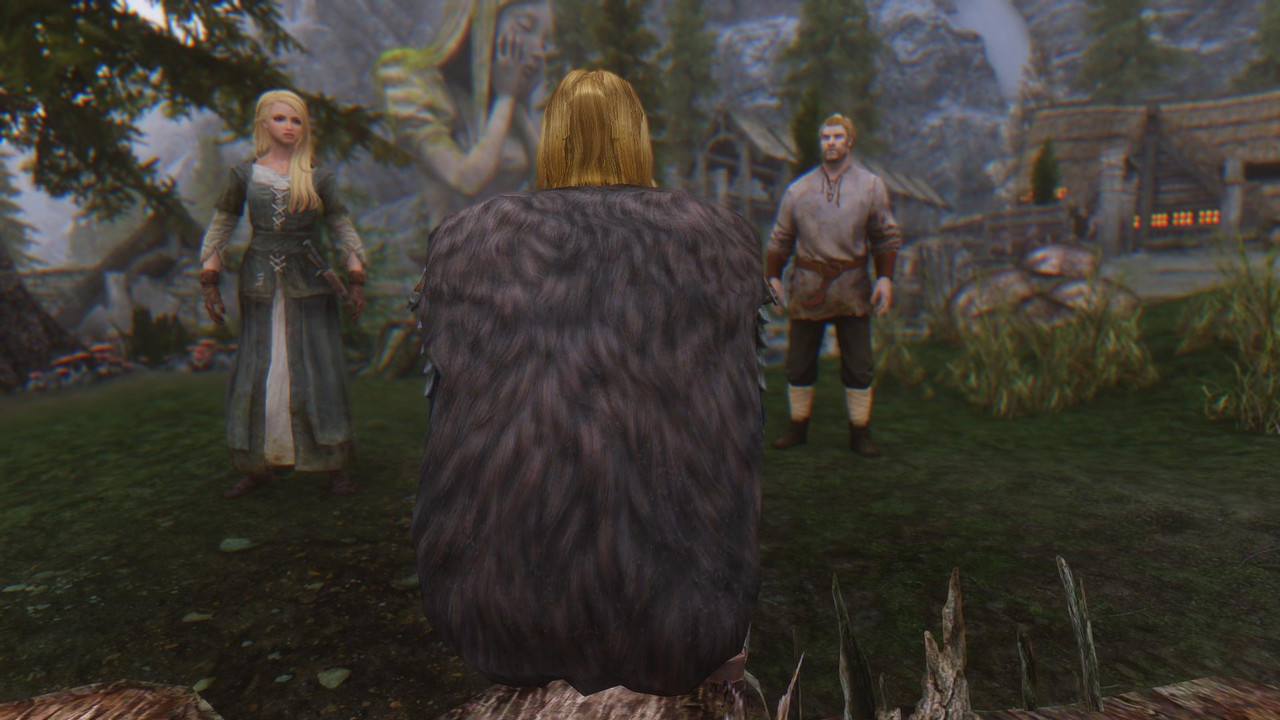 ?: Let me try to communicate with this monkey.

Vincent: YES! I WOULD LOVE TO!

Gerdur: You would?! Oh thank you traveler. Whiterun is a half mile from here, keep north and you wouldn't be able to miss it.

Gerdur: The Jarl need to be inform about the dragon. If you can that, Riverwood would be in your debt.

Hod: I would go myself, but I uh...have to take of the mill.

Ralof: They'll chop my head if I set foot in Whiterun so...