[Messing around with the CBBE Morph sliders in RaceMenu. I didn't think I was into the whole pregnancy thing, but damn. Gonna have to download that soulgem oven mod now.] 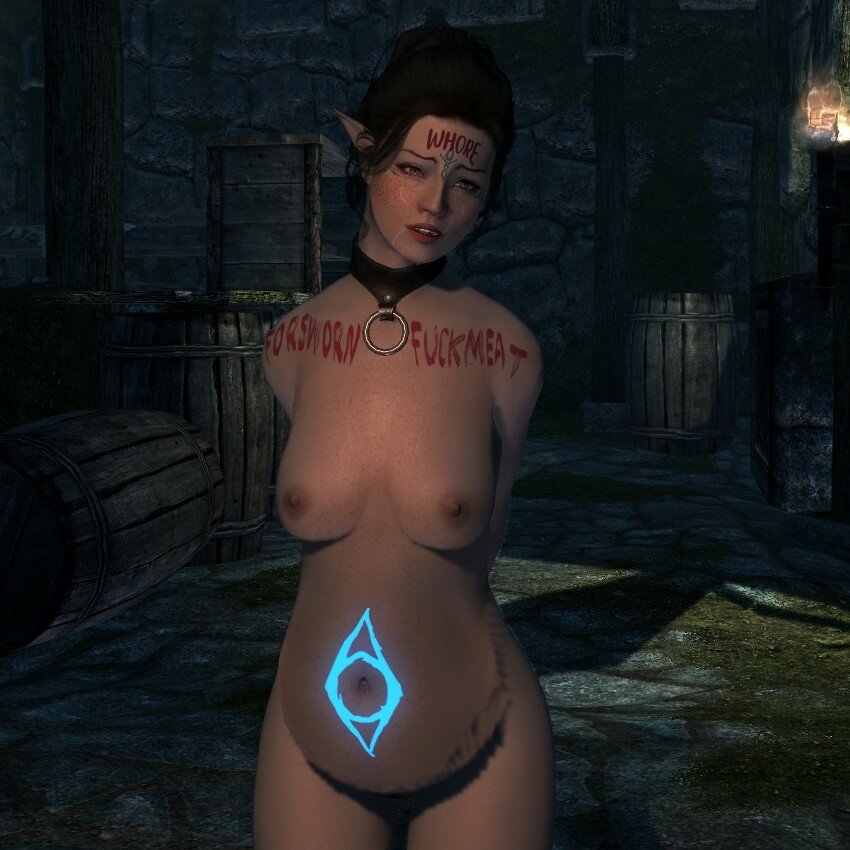 The lawless Reach, in the end, proved to be more than a match for the so-called Dragonborn...

Fuckmeat whimpered as the hood was yanked from her face.

All around her, the Forsworn  - Masters  - lay dead, or dying. Men clad in

blue wool and mail were setting the tents on fire. Stormcloaks. The name

for these people came back to her like a bolt of lightning, across the fog of

time. How long had it been?

"Wait, I know this one," he said to his companion. "Where have I seen her

A snort. "She was the one everyone said was 'Dragonborn', remember? A

few seasons ago, when the Greybeards broke their silence?"

A flash of recognition. "Hmph, I wondered what came of that. Did people

really think this sow was Dragonborn?"

"Talos knows why. This one's not even a Nord."

"More than that, an elf bitch!" He spat. Fuckmeat flinched as spittle hit her

face, but knew better than to react.

Dragonborn. That was a word flavored by the bright optimism of seasons

long past. It had been a long time since anyone had called her anything

The Stormcloak started to undo his britches.

"Sinmir," his companion said sharply. "The High King will want to decide

what to do with her."

The master called Sinmir grunted. "Relax, Ralof. Just going to use her pretty

Ralof. Fuckmeat recognized the other one now. Helgen. The cart. Gods, that

felt like a lifetime ago. Ralof looked down at Fuckmeat with an inscrutable

expression for a moment, then turned away with a disgusted grimace.

Sinmir. His cock was out now, jutting angrily against her lips.

The former Dragonborn closed her eyes, resigned. It was what she was good

for. Fuckmeat parted her lips, and went to work.

Other heroines, other bad ends: