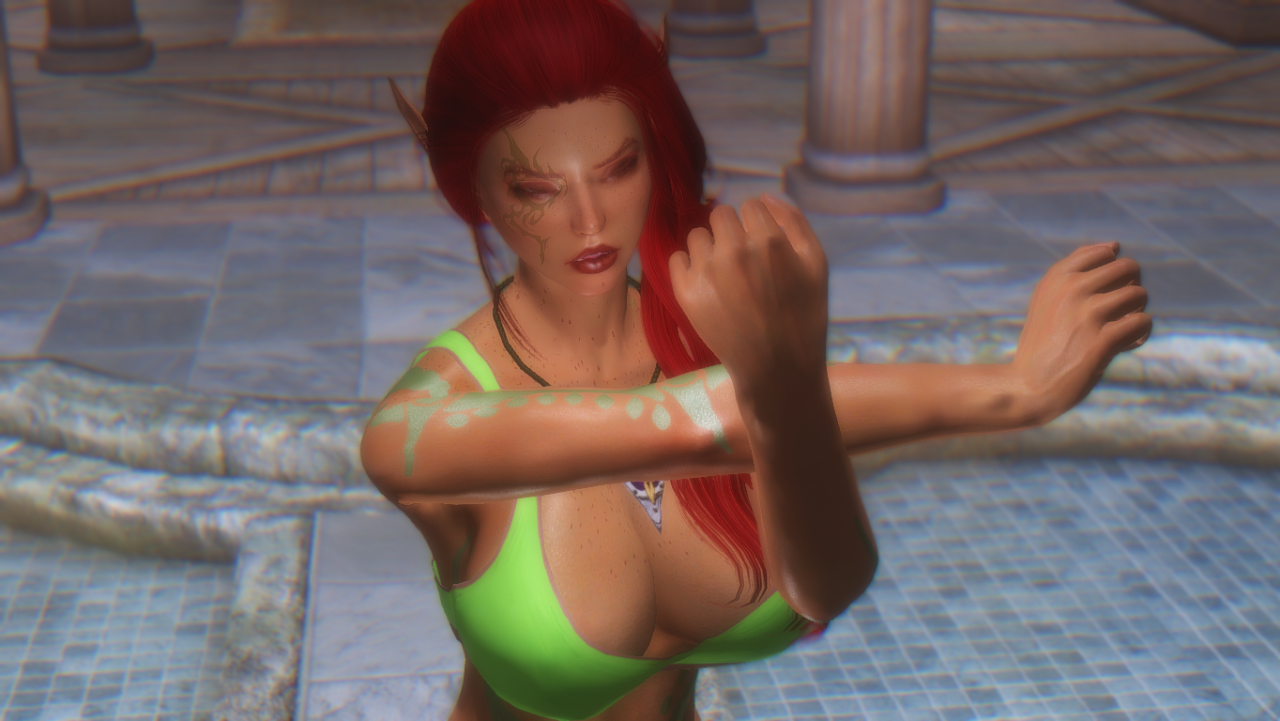 Born from a passionate tryst in the between her Bosmer mother and the Imperial Soldier who stole her heart for but one night, Aeriniia grew up in Whiterun. Her mother, having been a priestess of Kynareth herself in Cyrodiil, submerged Aeriniia in all things Kynareth until it was driven into her that that she would follow in her mother's footsteps. Although she realized very early that there was no escaping this inevitability, she found being a priestess to be a... suffocating experience. The conformity, the rules, the rigidness, all of it was a lot for the curious little Halfling to come to terms with. Not only that, in spite of her mother constantly insisting that this lifestyle would be a fulfilling one, Aeriniia felt as if there was a hole in her life.

That all changed when at the age of seven when a traveling caravan of Khajiit visited the city and performed a show in the city's marketplace. It was nothing like she'd ever seen before. Some Khajiit were displaying their strength and accuracy, other Khajiit were performing acrobatic feats, and others were entertaining the crowd both with song and jests. However there was one among them, a Redguard woman, who caught the Halfling's eye. This performer, Desert Rose, dressed in attire that showed off her nubile assets and displayed the limits her nimble and supple body could go to through dance and rhythmic stretching. Where others jeered in disgust at how brazenly she was dressed or turned away in an attempt to be "polite," Aeriniia was drawn in her eyes never leaving Desert Rose's form until she disappeared from sight after the caravan's performance was over.

At first, Aeriniia believed that this was a sign that she was into women. So she tried her hand at dating both men and women alike and seeing if this was what she was missing. However, despite how loving some of her partners were, from both sexes, Aeriniia still felt this insatiable longing in her chest which resulted in all of her relationships failing. It was after her eighth relationship had ended sourly that she realized that it wasn't Desert Rose's appearance that had enthralled her, but it was her performance. It had been seven years since seeing that caravan's performance, but the Halfling remembered everything that Desert Rose had done in its totality. And so, one day after finishing up her duties at the Temple of Kynareth, Aeriniia sneakily left the city and found a patch of trees to the south that she'd be obscured from the main roads and hid there. Once she was sure that she wouldn't, COULDN'T, be seen, she disrobed until she was stark naked. She didn't have anything as revealing or giving as Desert Rose had, so she decided to just try without. After taking a deep breath and calming her racing heart... she danced.

Aeriniia danced, and stretched, and danced, and stretched and danced for what felt like an eternity. For her, time slowed as she danced and she could feel every slight shift happening around her. The alteration of the wind's speed or temperature, the moment when sweat was about to expel from her pores, the subtle differences in the dirt below her feet and which places she ought to avoid if she didn't want to injure herself. She wasn't as supple as Desert Rose, but she still replicated the dancer's performance over and over again as best she could until she was finally stopped by her mother who bore down upon her like she was unhinged. Forcibly robing her, her mother brought her back home immediately and gave her the worst tongue lashing she'd ever had. It was some time into her mother's speech that Aeriniia realized that it had gotten very, VERY dark and that she hadn't eaten in quite some time, so she unintentionally asked while her mother was mid-sentence, "That's all well and good, but what's for dinner, mother?"

The next thing Aeriniia knew, she was on the ground surrounded by her things and a foreign bag next to her. She looked up and saw her mother both seething and crying at her. "I'll not have a Daedra worshipper for a daughter! ESPECIALLY on of HIS worshippers! I thought I had raised your right, but it turns out that you're your father's daughter after all... Get out of my house, Aeriniia. And never let me see you again!" And then the fourteen year old Half-Bosmer Half-Imperial found herself without a home, without a family, and only with the items she could carry and the teachings of Kynareth.

She didn't know what to do so she stayed at the Temple for a time, making sure to avoid her mother whenever possible. However, eventually the priest and priestesses there caught wind of her late evening activities and at the age of sixteen she was expelled from the Temple on the grounds of potentially being a Daedra worshipper. POTENTIALLY. Aeriniia didn't understand how merely dancing and stretching had ANYTHING to do with Daedra worship, but it didn't matter. Seeing that she had nowhere else to go, the Halfling took her talents and began traveling around the province. However, even with all that had happened to her, she didn't stop dancing in the late evenings. How freeing, how cathartic it was for her to let herself be engulfed by her dancing was addicting, and no matter how many times she'd gotten kicked out of an establishment or a town or a city because people found out what she was up to, Aeriniia continued to dance. Then in her nineteenth year, the first of two life changing events happened to her.

She had just been kicked out of the Winking Skeever and was traveling the outskirts of town when she found a traveler on the side of the road. He had a deep nasty wound in his abdomen as if he had been attacked by something, but no one was giving him the time of day. Being a priestess and rather adept in Restoration Magic, Aeriniia knelt beside the wounded man and said, "I see you're in trouble kind sir, would it bother you if I assisted you so you could be on your way?"

The man, a Nord, looked at her and smiled. " * cough *  * cough * Aye lass, it does seem that I'm in quite the predicament. However, it's  * cough * better if you don't involve yourself with me. Don't want to dirty your reputation because your aided someone from the  * cough *  * cough * 'wrong crowd'." Seeing her tilt her head, the Nord continued, "My attire is a dead giveaway, lass. Now  * cough * leave me be, lest someone assume you're an acquaintance of mine."

Still confused, Aeriniia got to her feet and retrieved a book from her satchel. "I'm sorry, but... Is your attire supposed to mean something to me? I've never come across someone who dressed the way you do."

He looked at her wide-eyed. "Well I'll be... Never  * cough * thought I'd see the day where someone didn't recognize the attire of a Thieves' Guild member. Times must be harder for me than I'd thought... I've got to let Mercer know about this... * cough *  * cough * "

He nodded. "Indeed, lass. Now you understand why  * cough * everyone's acting as if I don't exist. They'd rather I die out here than cause a scene in a city. They think me lesser than them, and to be honest? I really don't give a damn, lass. However... I would be something of a  * cough * heartbreak  * cough * to die out here alone..."

Aeriniia gave him her hand and said, "What if I can heal you? Would you still be up to dying out here? Alone? With no one beside you?"

"Ha! No offense lass, but what I've got... * cough * This wound... If you're not a master in Restoration... You're just wasting both our time." The thief leaned back and tried to get as comfortable as he could. "Now go, before a guard finds you."

"Kynareth's blessings extend to both the righteous and the unruly alike. I may not be the master that you claim to need, but I'd rather drink Skeever piss than see someone dying and not help them." Seeing that she wouldn't relent, the thief allowed her to heal him, and although her skills were near the expert level when it came to Restoration, they were a far cry from what was needed to heal him. Multiple times while she was healing him, she felt like she was on the precipice of doing it, but something was holding her back... SHE was holding herself back. Her doubt, her worries that her mother was right, her living and financial situations, there was too much on her mind besides the task at hand and she had no way to free up the headspace that she needed... Except...

Maintaining her concentration on healing the thief, Aeriniia disrobed, much to the surprise of the Nord, and then suddenly began dancing. She began to feel the noise in her head dissipate as she let the rhythm in her soul consume her; however she also realized that she was going to lose the thief if she did this as normal. So after a short reset, Aeriniia resumed dancing while keeping the thief as her one and only focal point. The main driving force behind this dance was to heal him of any and everything that was ailing him, and before she knew what was happening, Aeriniia was doing dances and stretches the likes that she'd never done before... the like of which she never knew she COULD do. Even with the Nord as her focal point, eventually she was consumed by her dancing until a stern but gentle force on both of her shoulders stopped her in her tracks.

"I don't know what it was that you did, lass. But Divines, if you aren't a blessing. However..." He motioned behind him, and Aeriniia noticed that quite the crowd had gathered. "...You MIGHT want to put on something to cover your delicates, before you make the 'wrong' type of people unseasonably warm."

After helping her dress and escape the crowd, the thief took Aeriniia far southwest from Solitude's gate and stopped once the pair reached a fork in the road. "I'm going back to Riften. You're welcome to join me if you'd like. However, I think it'll be quite some time before 'little Kyne' can return to Solitude."

"My name is Aeriniia! Aeriniia Elmwind. And if going with you to Riften means that you'll put me up for a time," She extended her hand out to him. "Then I'll gladly accept, Mister..."

"The name's Brynjolf, lass. Heh, I can ALREADY tell that Tonilla and Vex are gonna love you."

From that point on, Aeriniia continued to travel across Skyrim while using the Theives' Guild as a place she could call home. While doing so she gained a ridiculous amount of notoriety due to her unconventional methods of healing people and her imparting the teachings of Kynareth to everyone she came across. Many accounts from people who encountered her have said some variation of, "Hearing her teachings and seeing her at work, it felt as if I had been touched by Kynareth," and thus the legend of the "Eccentric Healer" known as Kynareth's Hand was born. As for the second major event that happened to her that was life changing... You'll have to ask her to find out.