When I converted the glass jar model for use in the Preserved Head piece, I ended up having to figure out how to recreate the transparency effect when the original model's went *poof*. The process got me a workable enough glass part, but not one that was suited for all of the things I'd be interested in using such a part for. It occurred to me that I could probably do the same process on some other meshes with the more rounded shape I was looking for, so I tried it out on some random stuff; potion bottles, wine bottles, the crystal from the enchanting table. It worked fine on all of them, but all of the meshes were a lot more janky and low-poly than I was hoping for. Then I remembered the Sigil Stone.

I actually played around with it a year ago when I was looking for inserts for the Gyro heads, but gave up on it when I found that, again, the conversion process fouled up its transparency effect. Since I also had no idea how to get its animations working, either, I just tossed it back into the virtual parts bin. But I remembered being impressed by just how high-poly the spheres that make up its various layers are, and yanked one out to experiment with.

It went quite well. 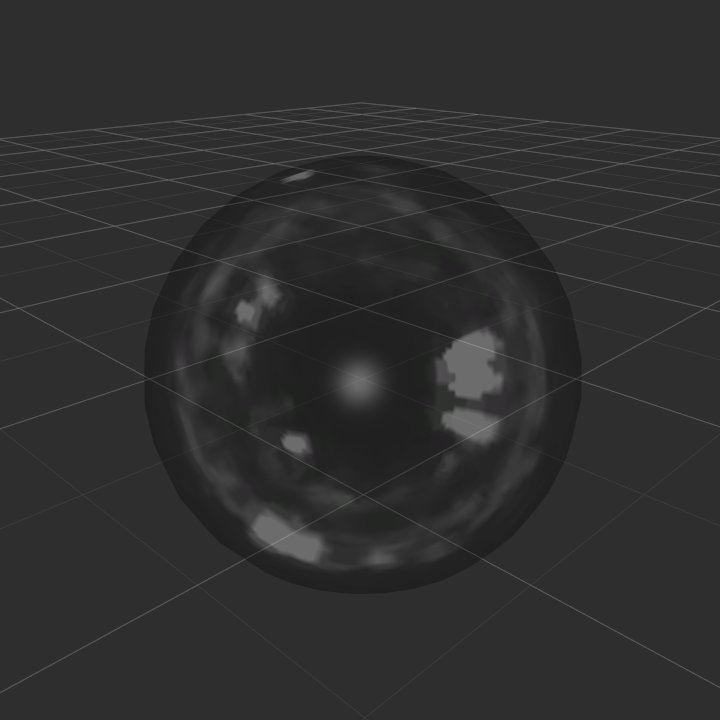 Just change around the textures and a few settings, and you end up with a perfect 'crystal ball' model.

As I said I've got a few vague ideas for this, but most of them I'm not really sure are workable. I did, however, decide to go ahead and use this in a second version of the Preserved Head concept. The existing one turned out pretty well, but it is in some ways a bit cruder and clunkier than I'd like. The neck is under-detailed, and the plate the jar mounts on is large enough to clip through things all too often when the head moves. So since I've got this globe and all the ring pieces from the Scroll chamber available, which I didn't when I built that first version, I went ahead and tossed together a more streamlined take on the idea. 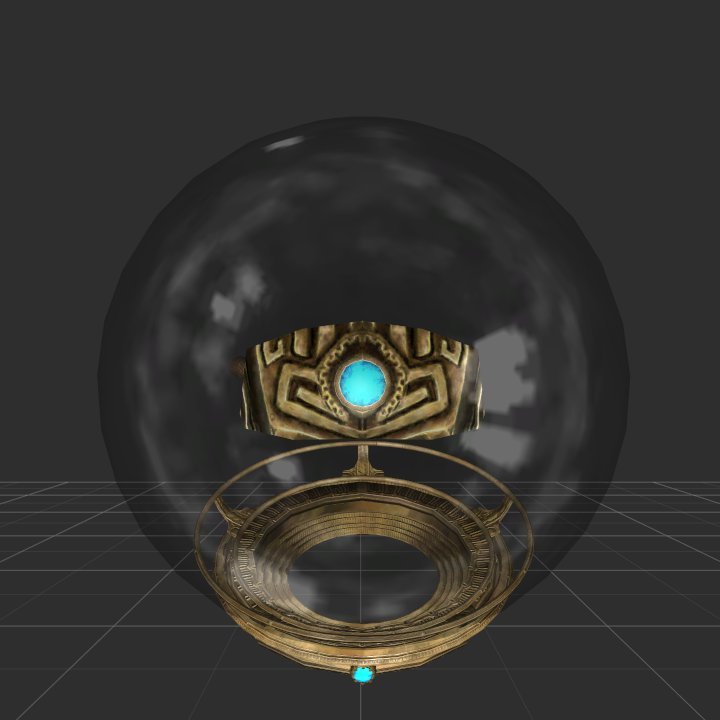 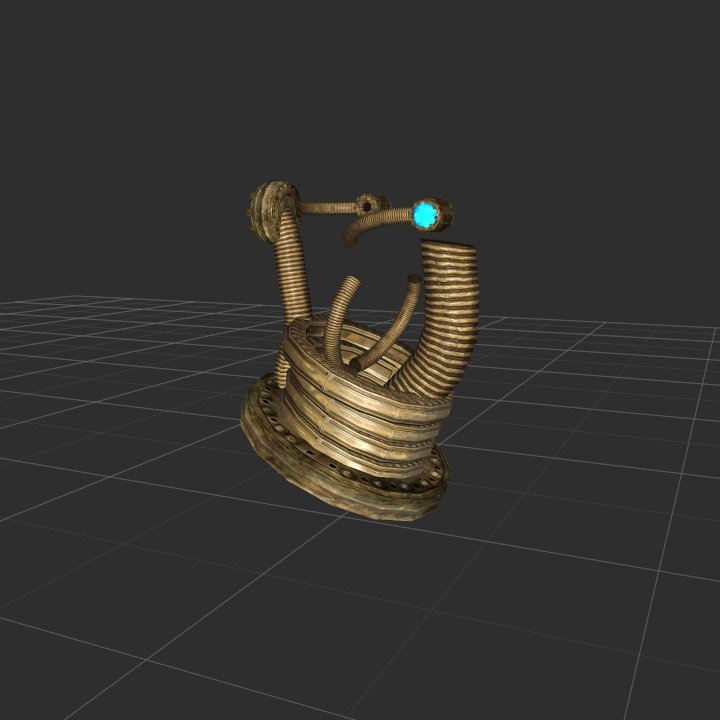 I also decided to implement this as two parts to begin with, unlike the first version where the jar-less iteration was a last-minute add-on. The neck parts and implants are on slot 45 and are used by themselves for the jar-less version (and are much more hair-friendly, since they don't have the big plate to deal with), while the parts for the globe and eye-plate (now with actual eye) are on slot 31. I've currently got the test version of the full Preserved Head 2 set up to use both of these as sub-meshes and the no-jar as a separate entry, like with the first version, but there's really no reason I couldn't have the globe as an independently usable 'space helmet' that you combine with the neck to get the full piece instead. Have to think about that.

Regardless, this mostly turned out nicely. 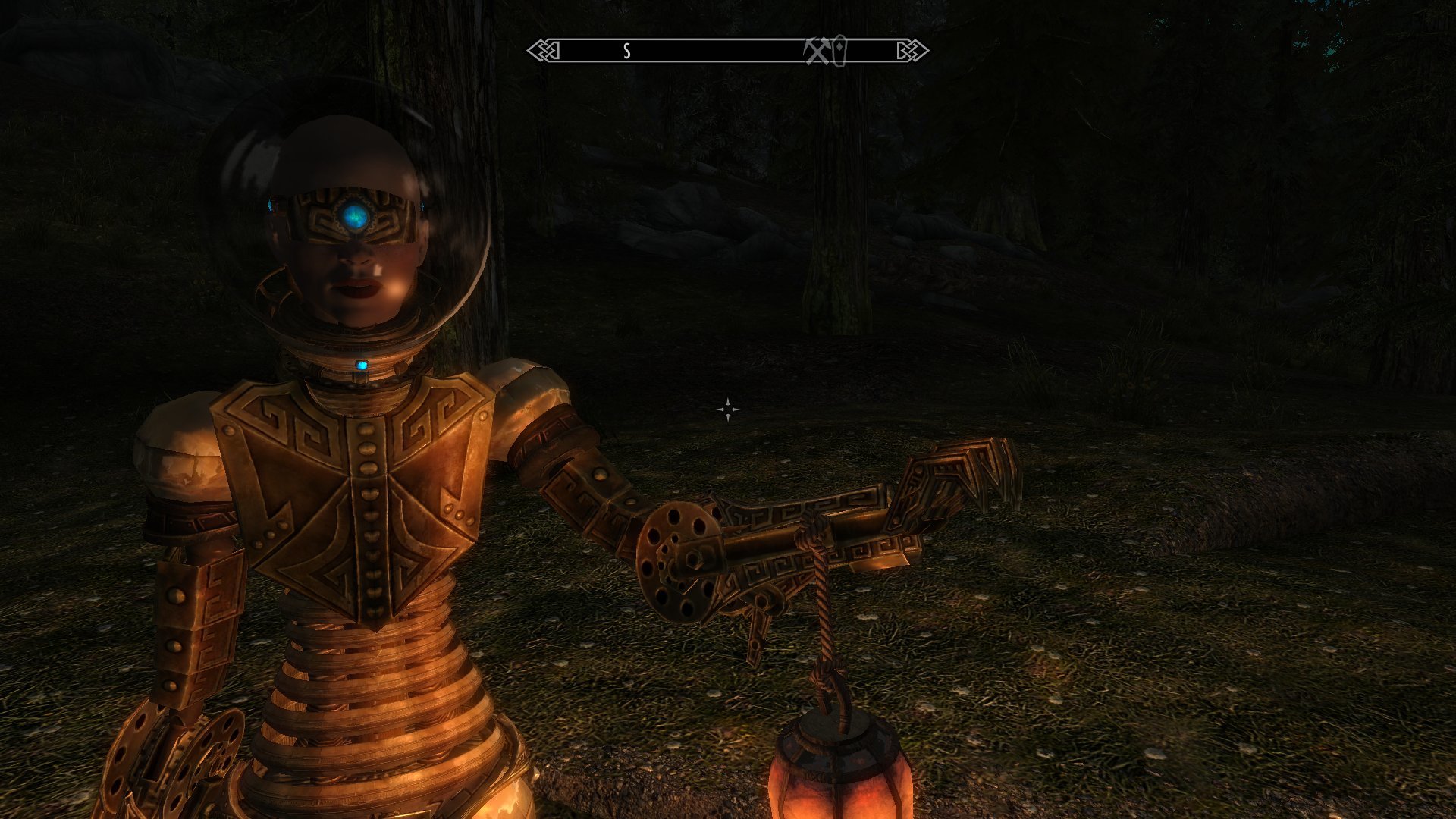 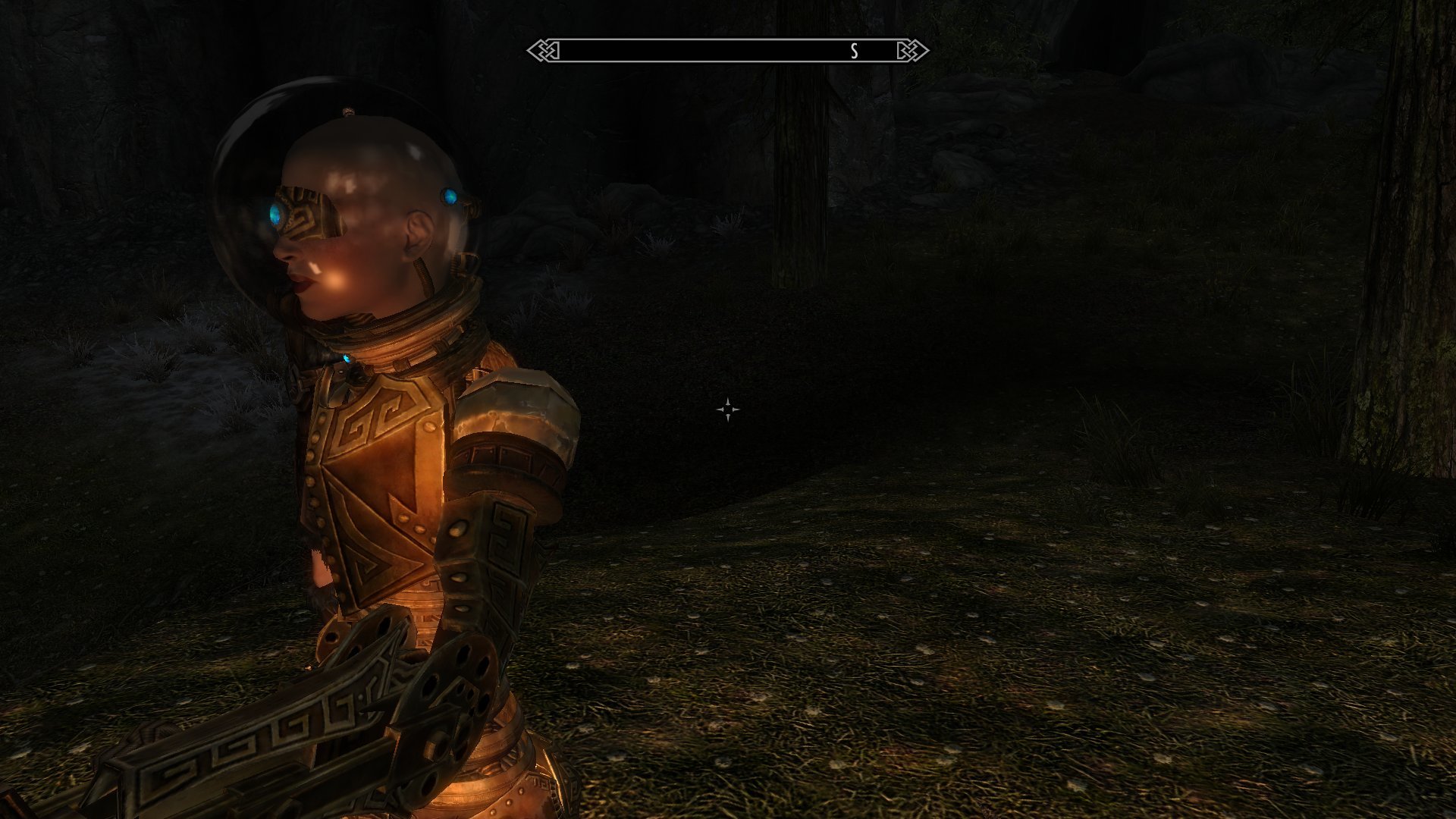 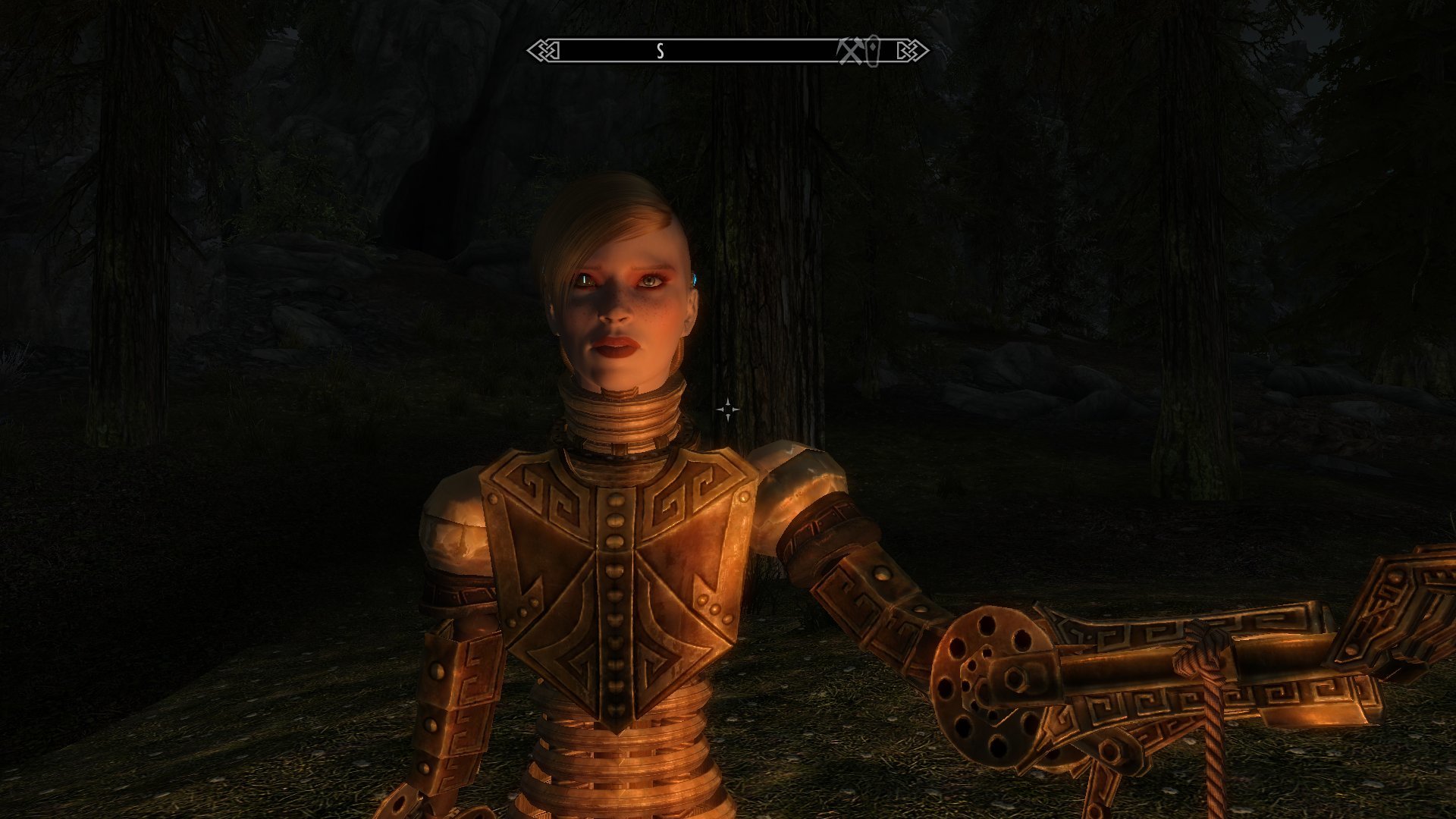 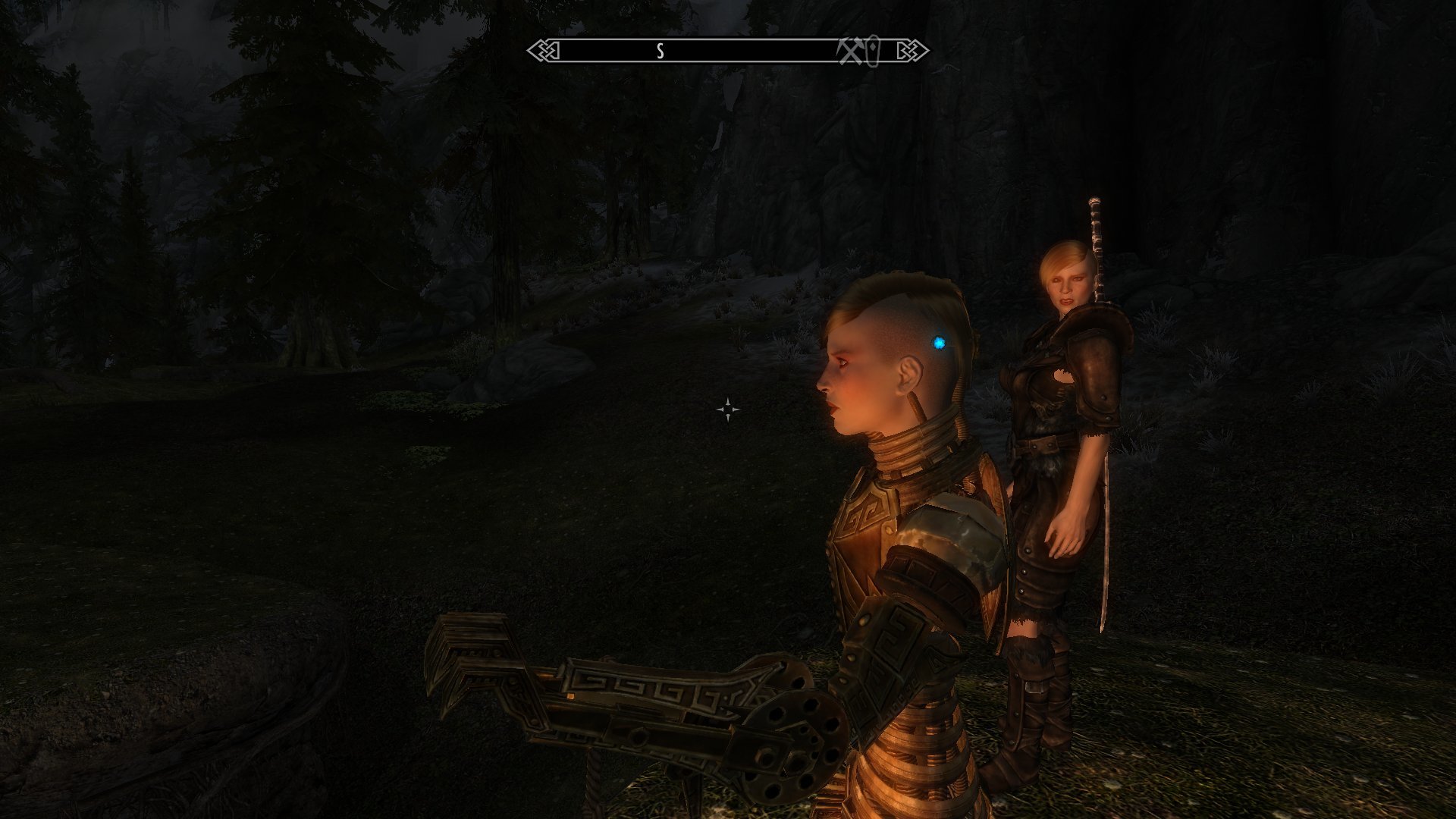 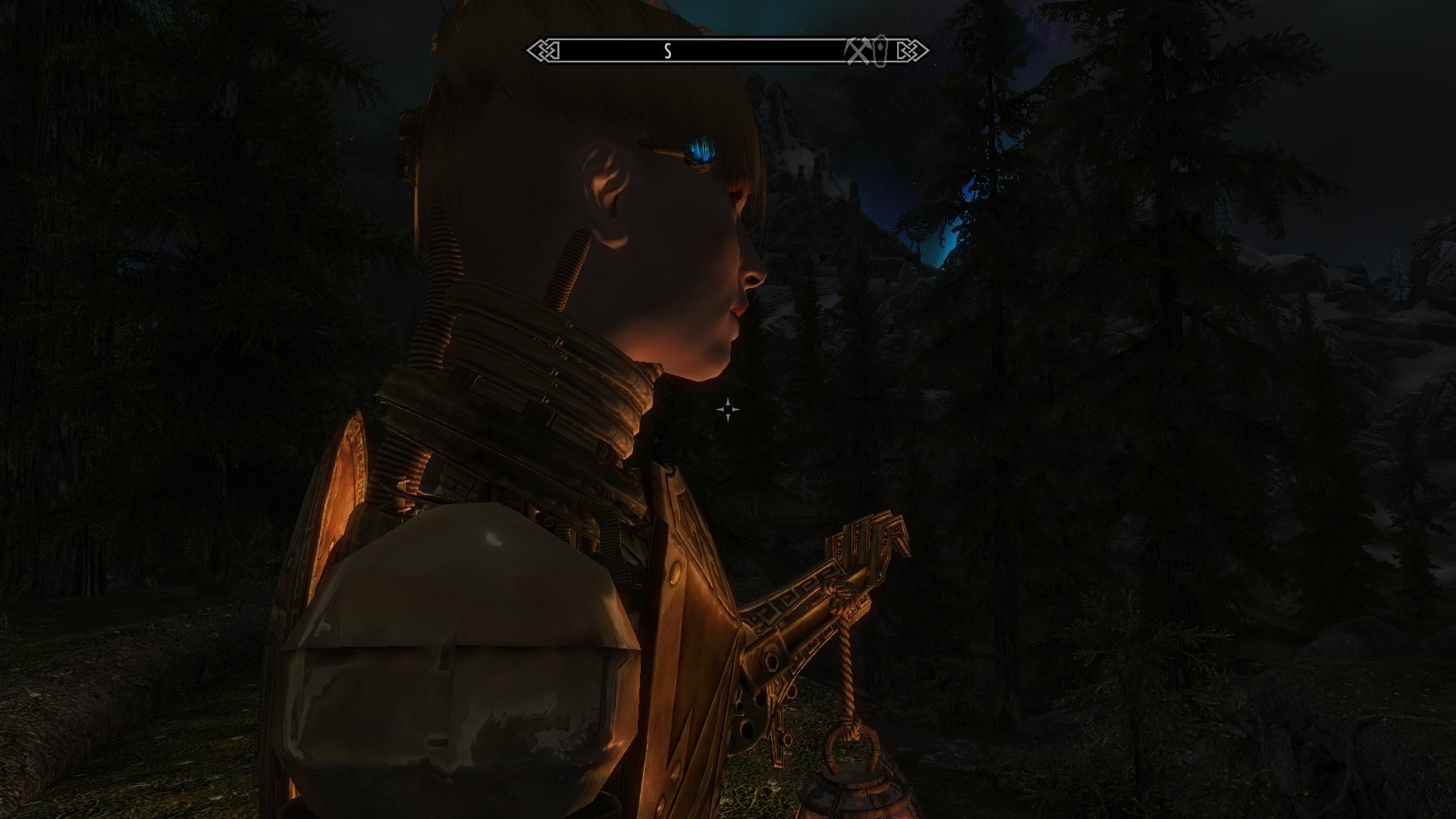 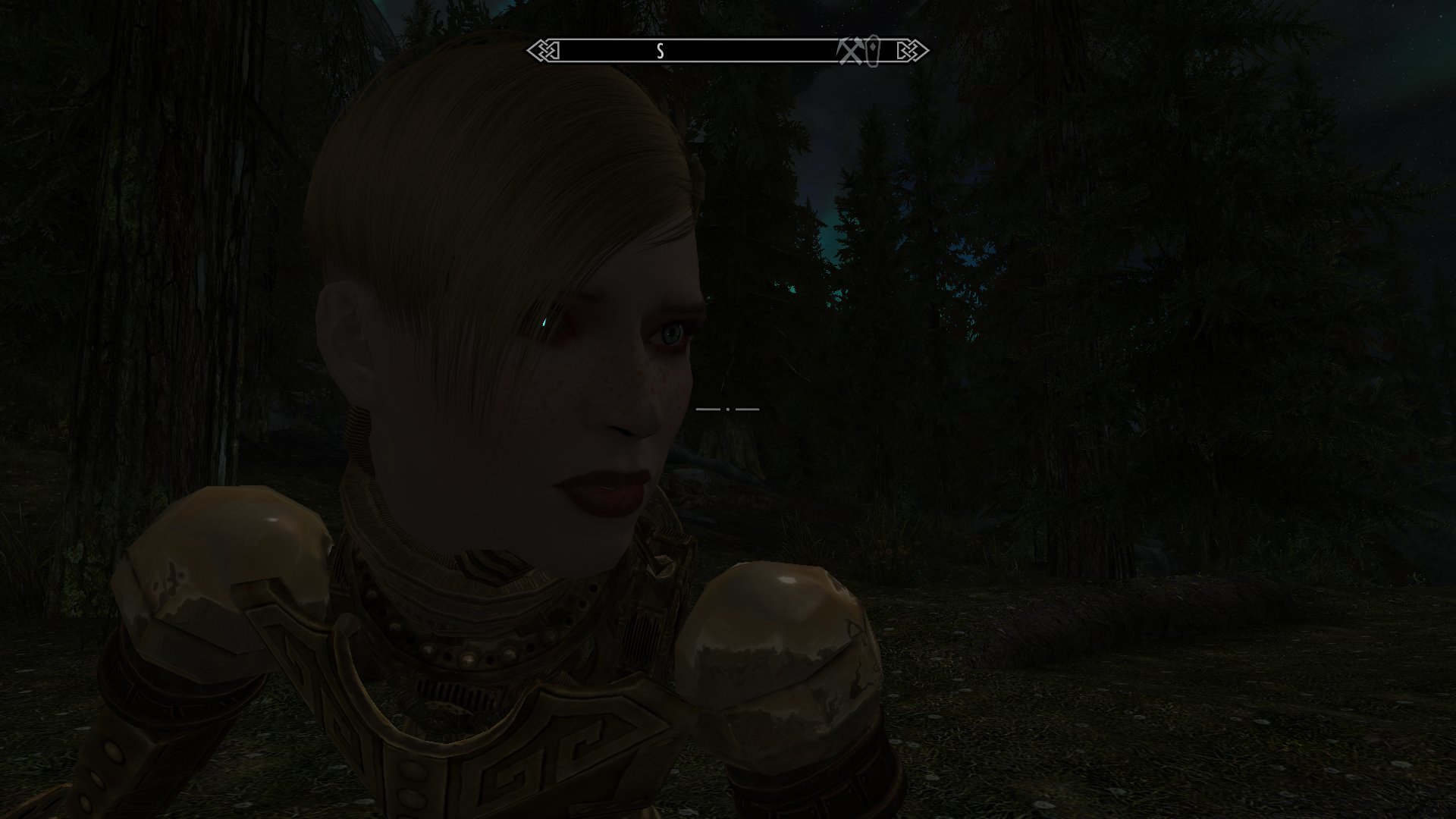 The main problem has been the neck. The way the neck animates in Skyrim is kind of horrifying at the best of times, and it turned out that trying to cram this much detail into there just means having to find more compromises for it. My initial hope was that I could get away with just using the rings to avoid the clipping issues between the neck sheath and head plate on the prior version, but when I actually put it in-game and into some sneak poses I just got unpleasantly distorted rings with gaps of bare skin between them. So I ended up having to put in a neck sheath anyway, but at least built a new, higher-poly one by compressing a length of the Gilded pipe and buried it in the rings so that it only shows during major motions. 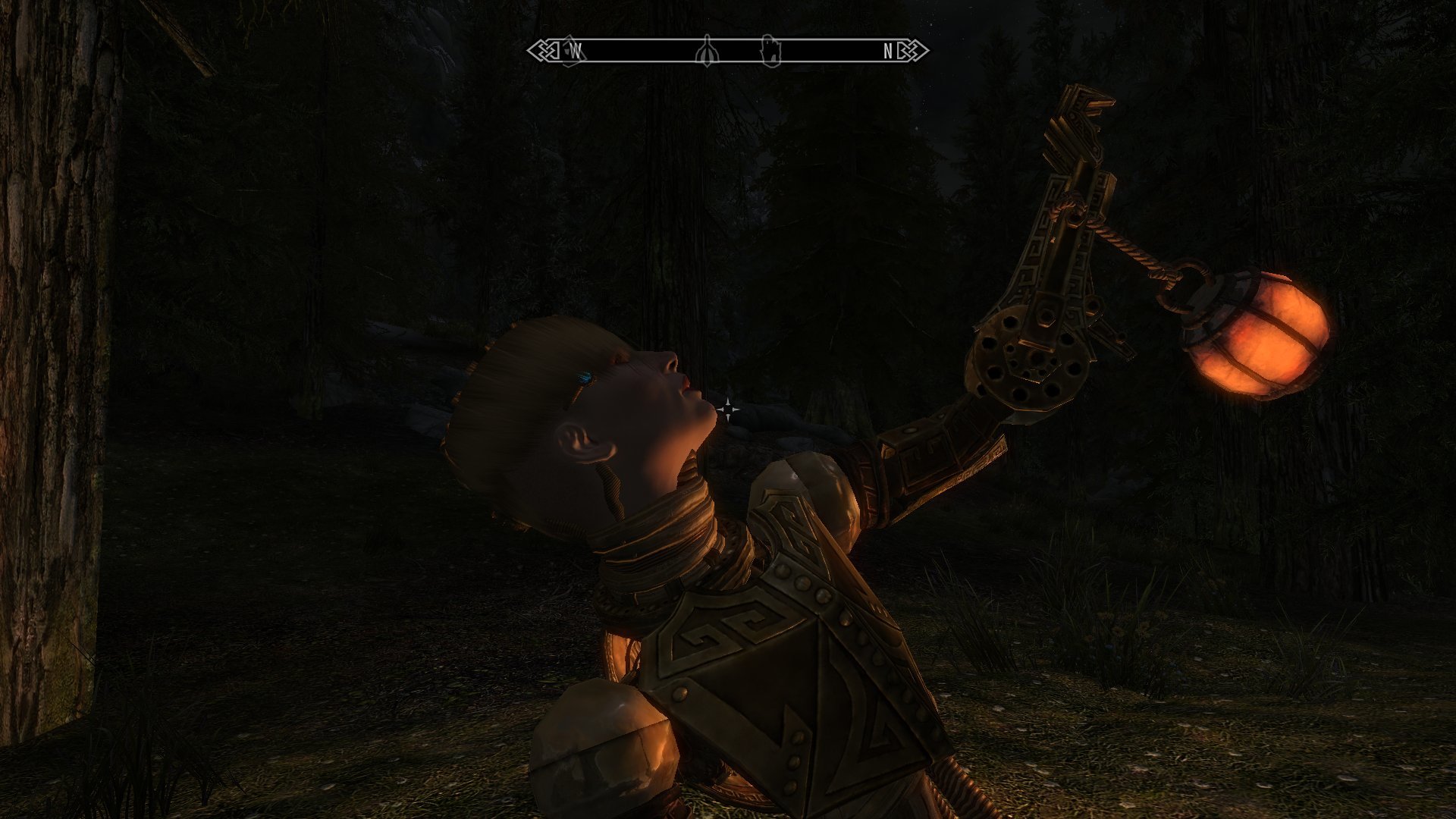 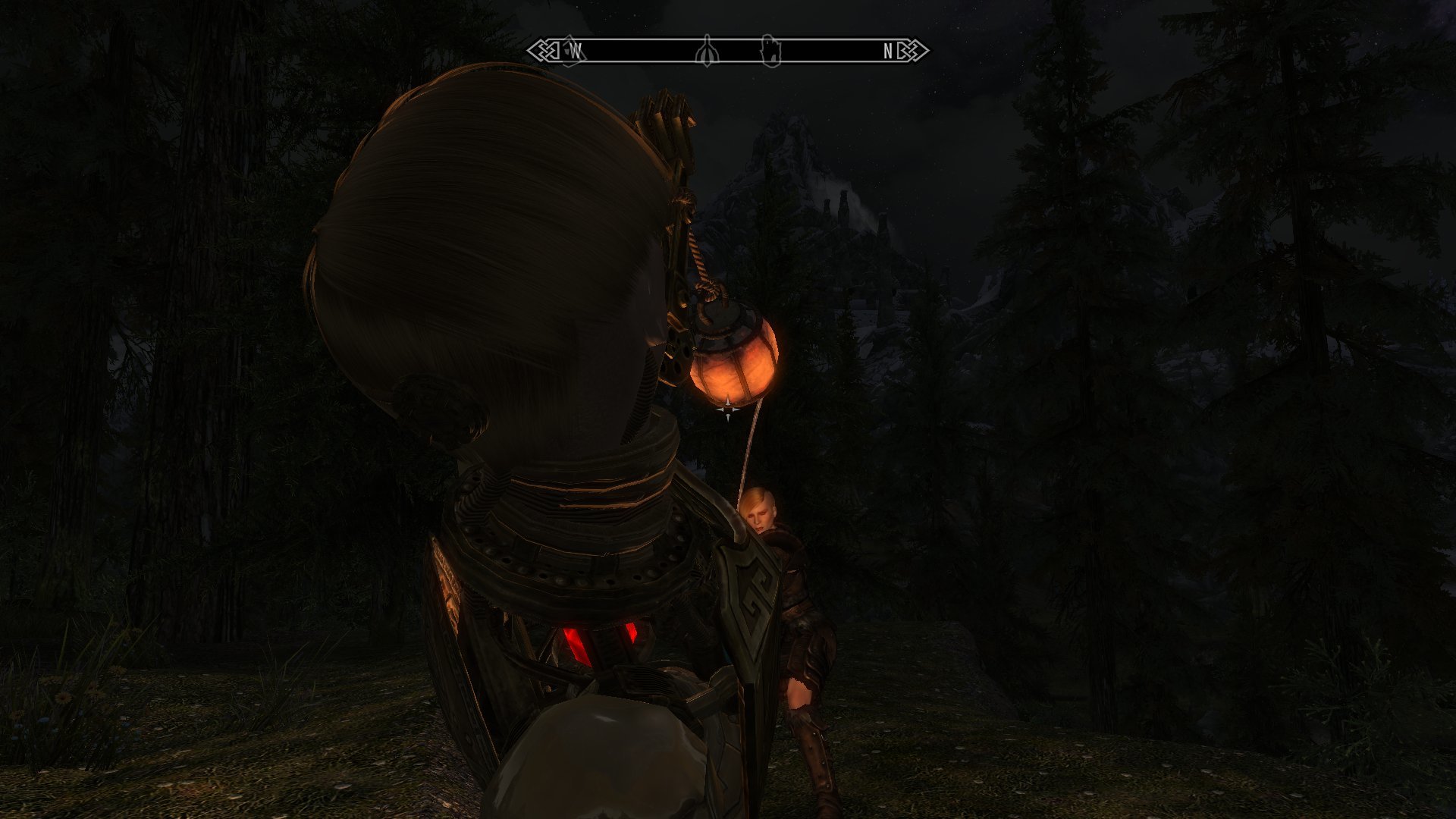 Still ended up with some clipping and distortion on the top two rings, annoyingly, but I'm not sure how much I can do to fix that without changing how Skyrim's entire bloody weighting system works.

Another thing I was dissatisfied with in the previous iteration was the lack of beast race support. I've been spotty about adding it in the past since it's a pain in the ass to do, and specifically skipped it there since there wasn't a good way to fit their heads into that jar model without making it frickin' huge. But it was an irritating gap, and here I've got this globe model that's a lot more flexible... 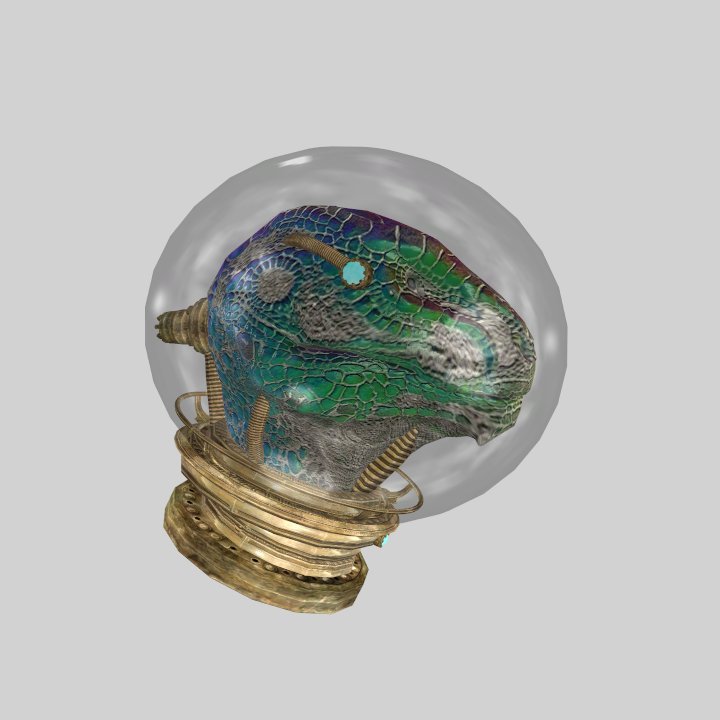 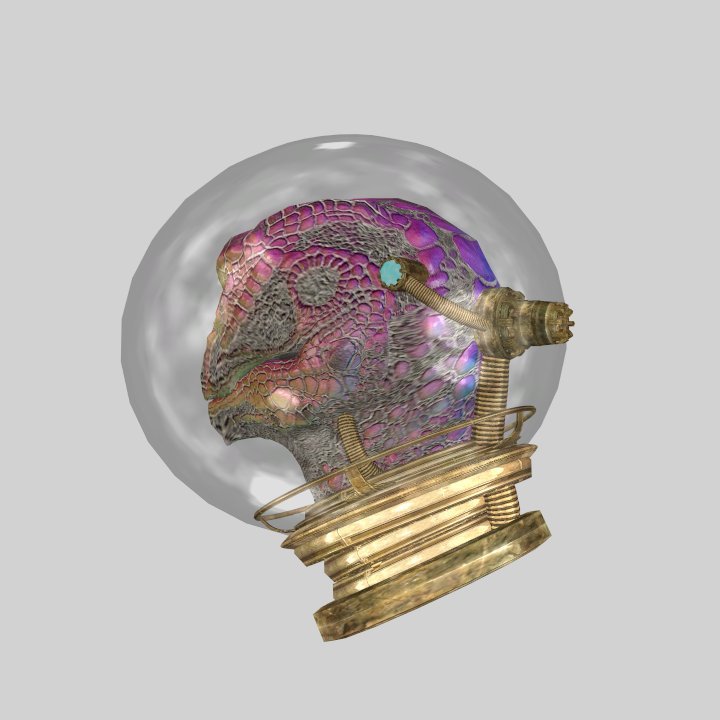 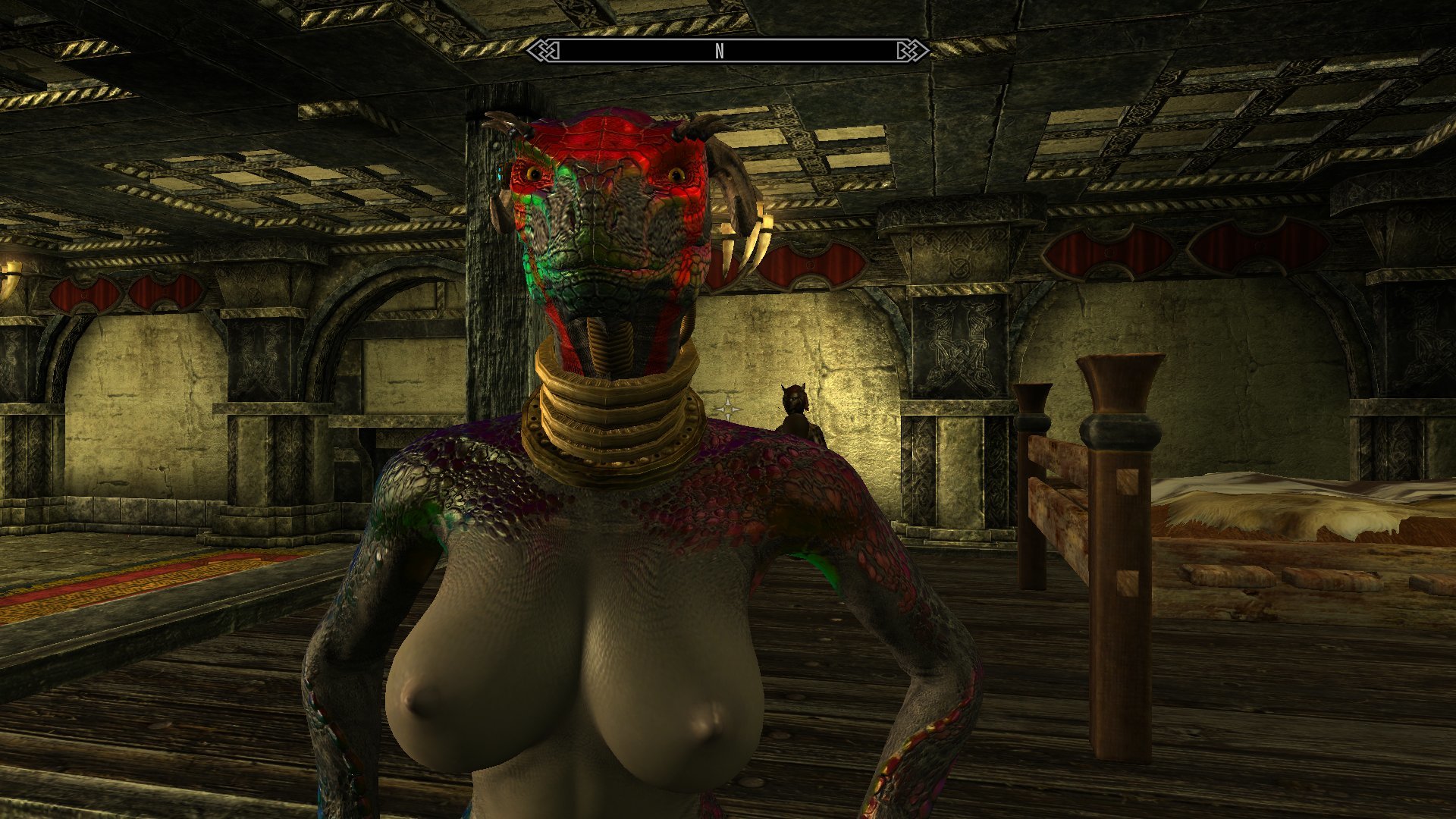 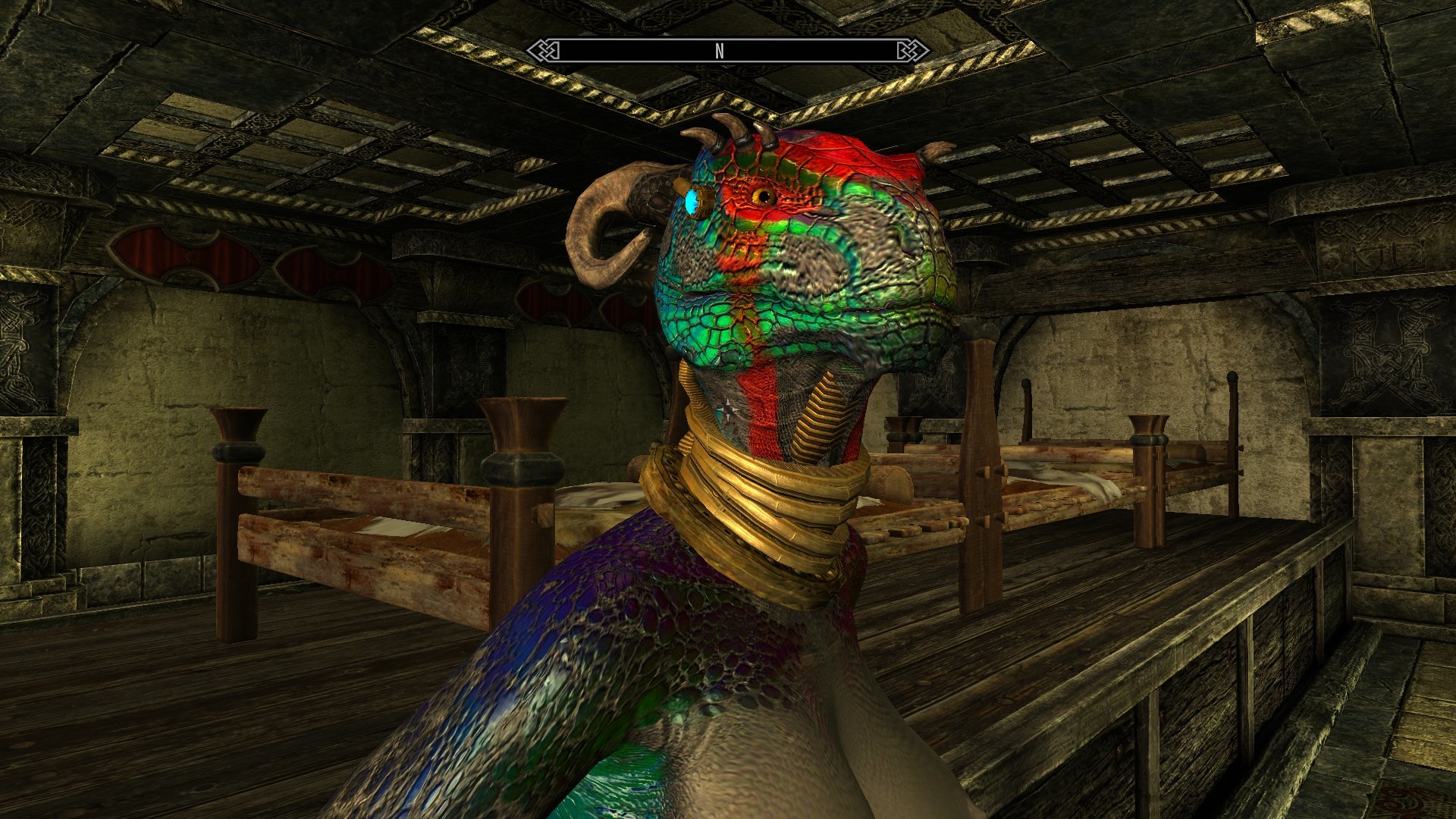 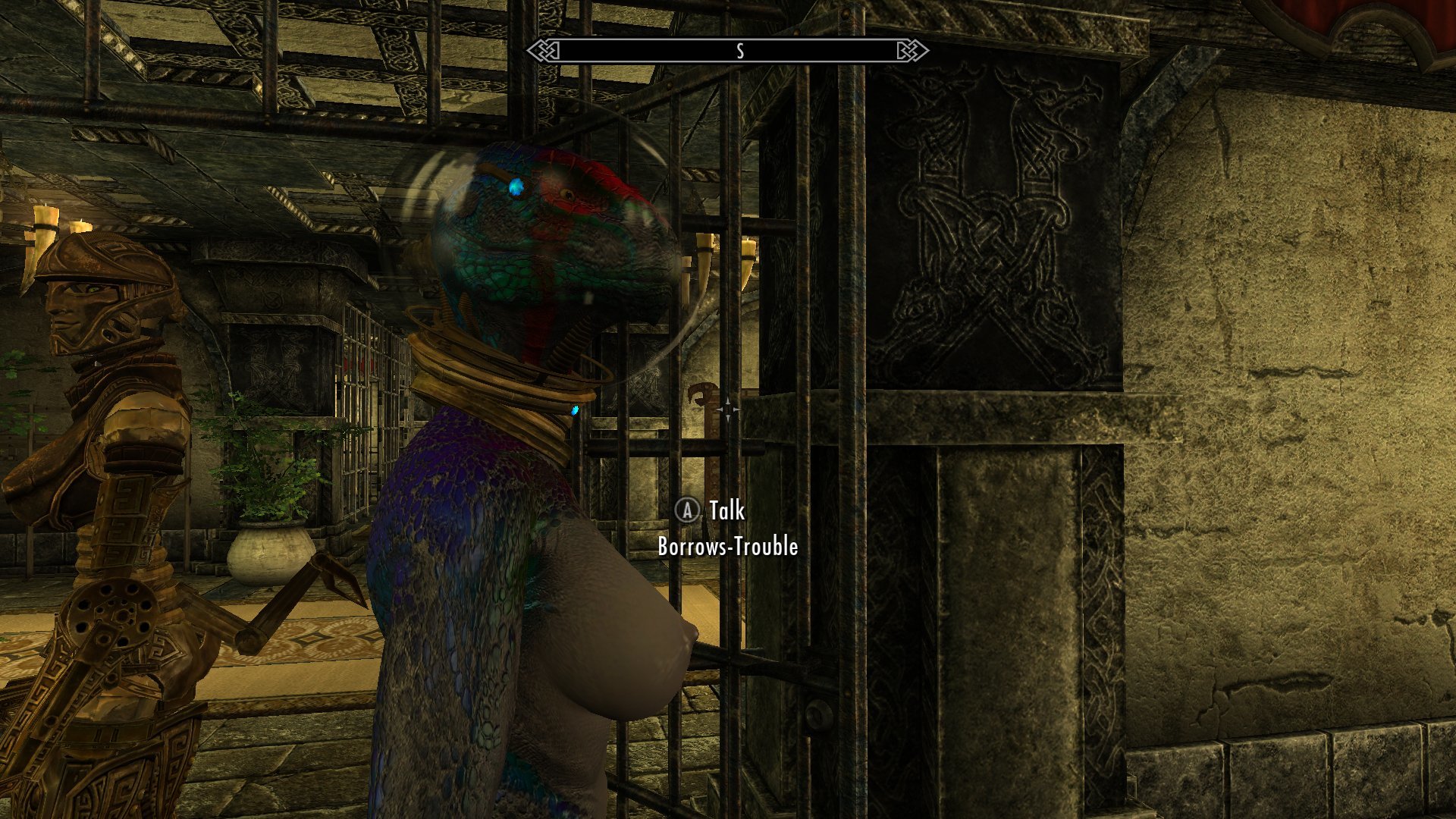 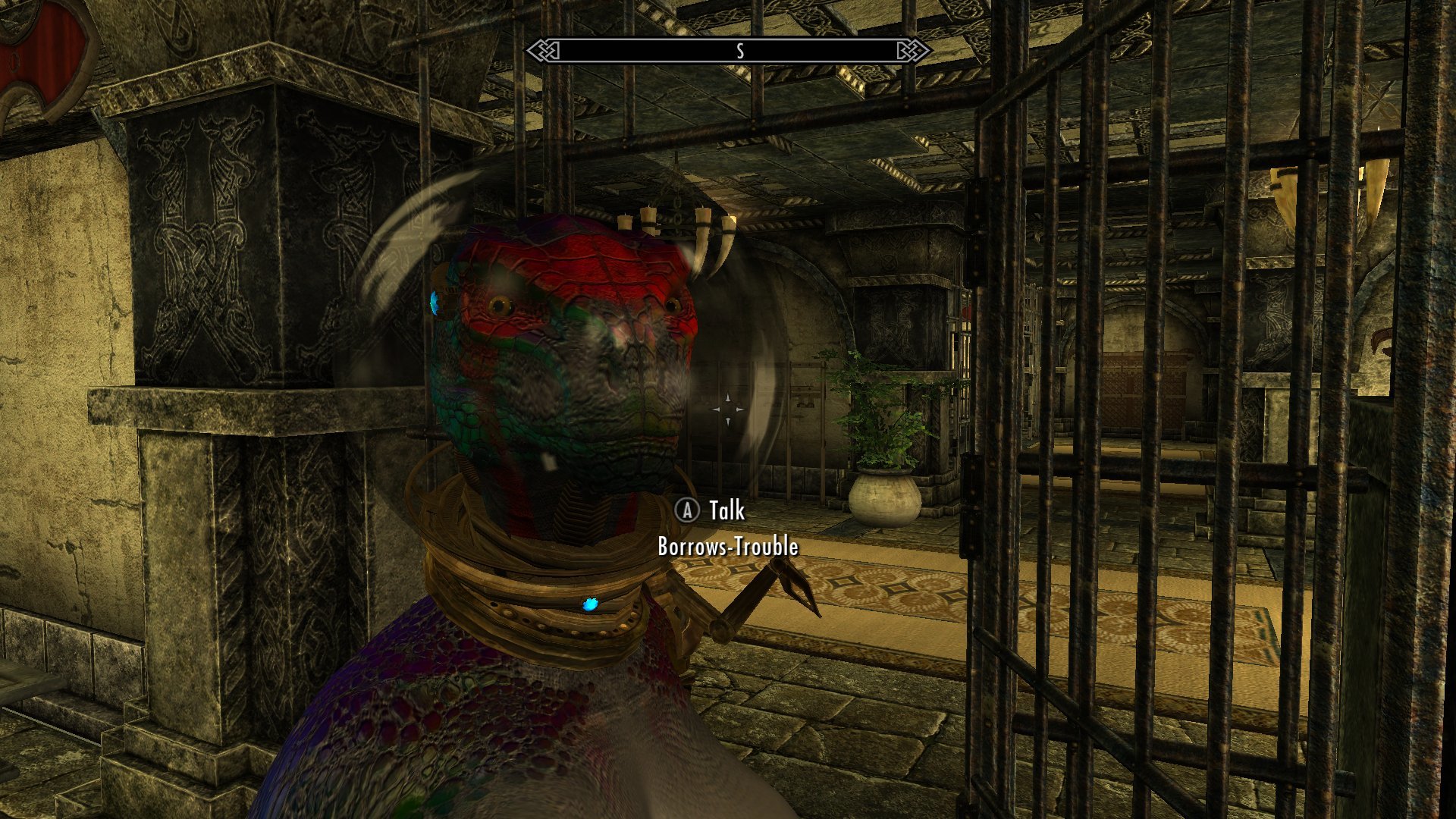 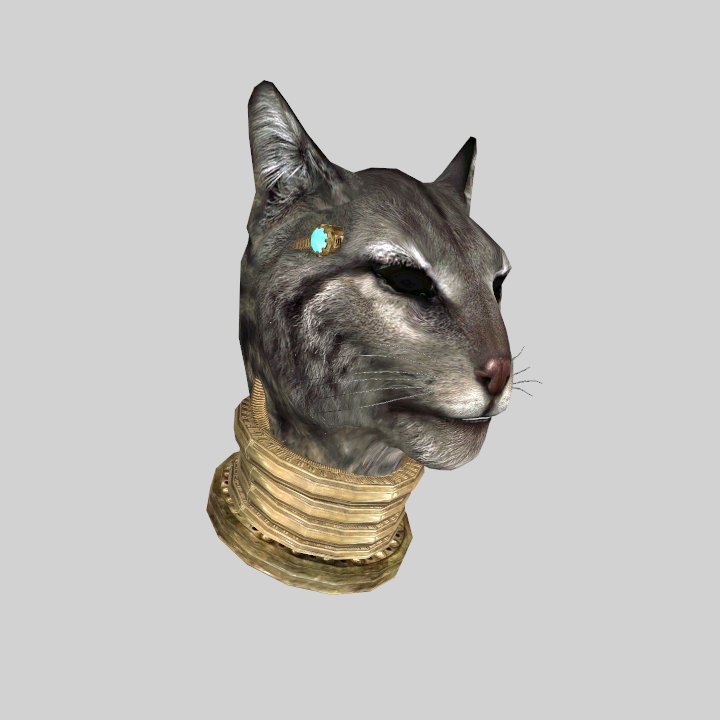 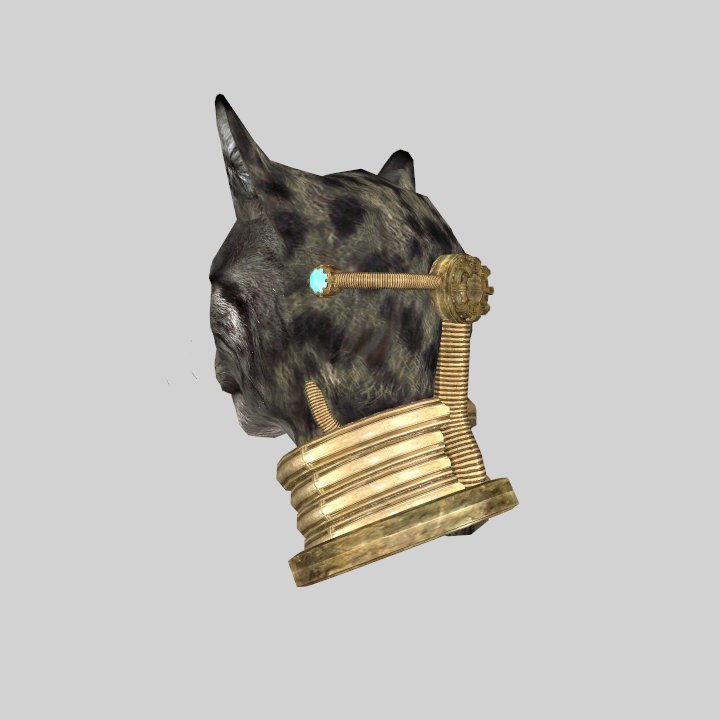 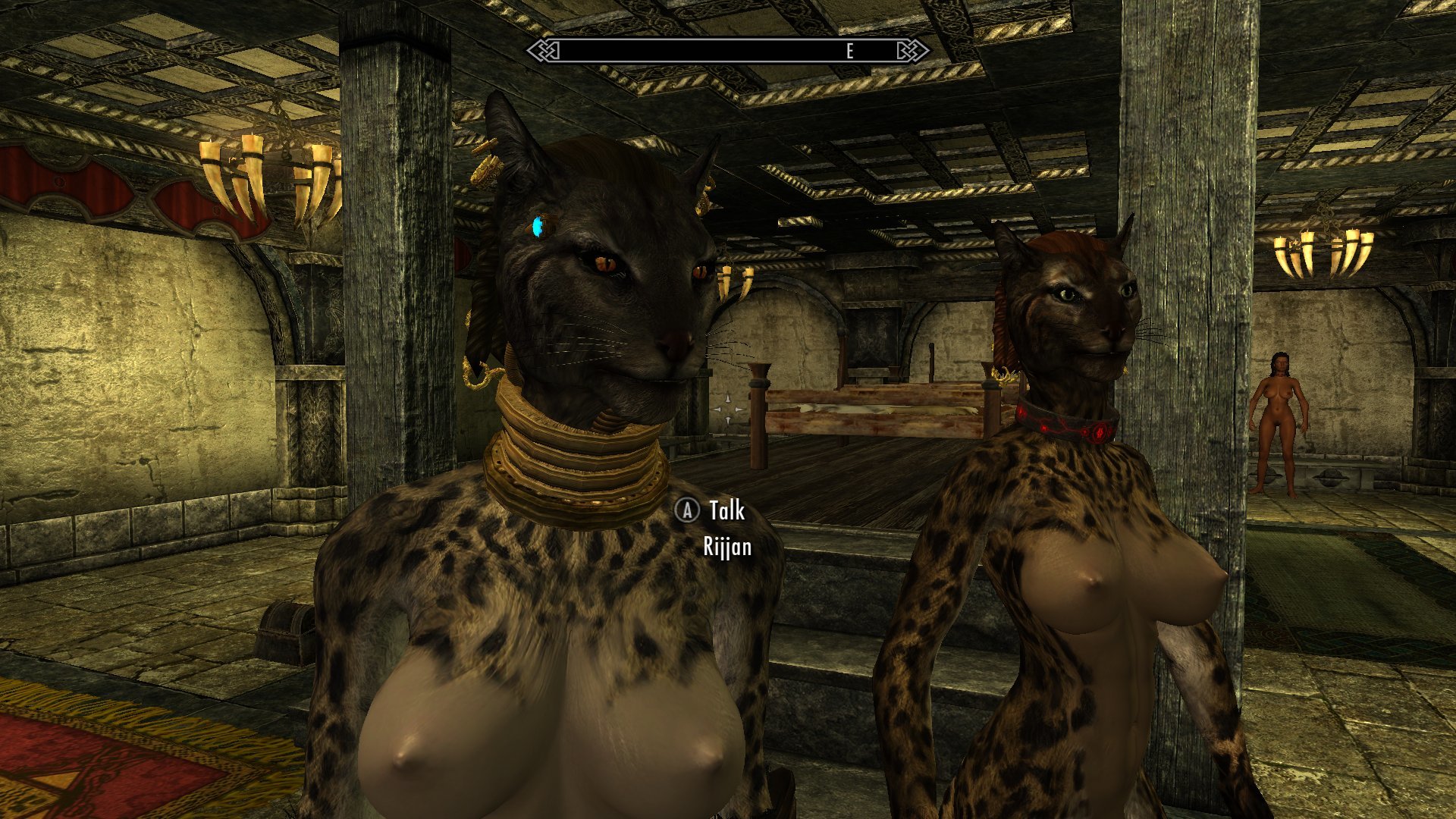 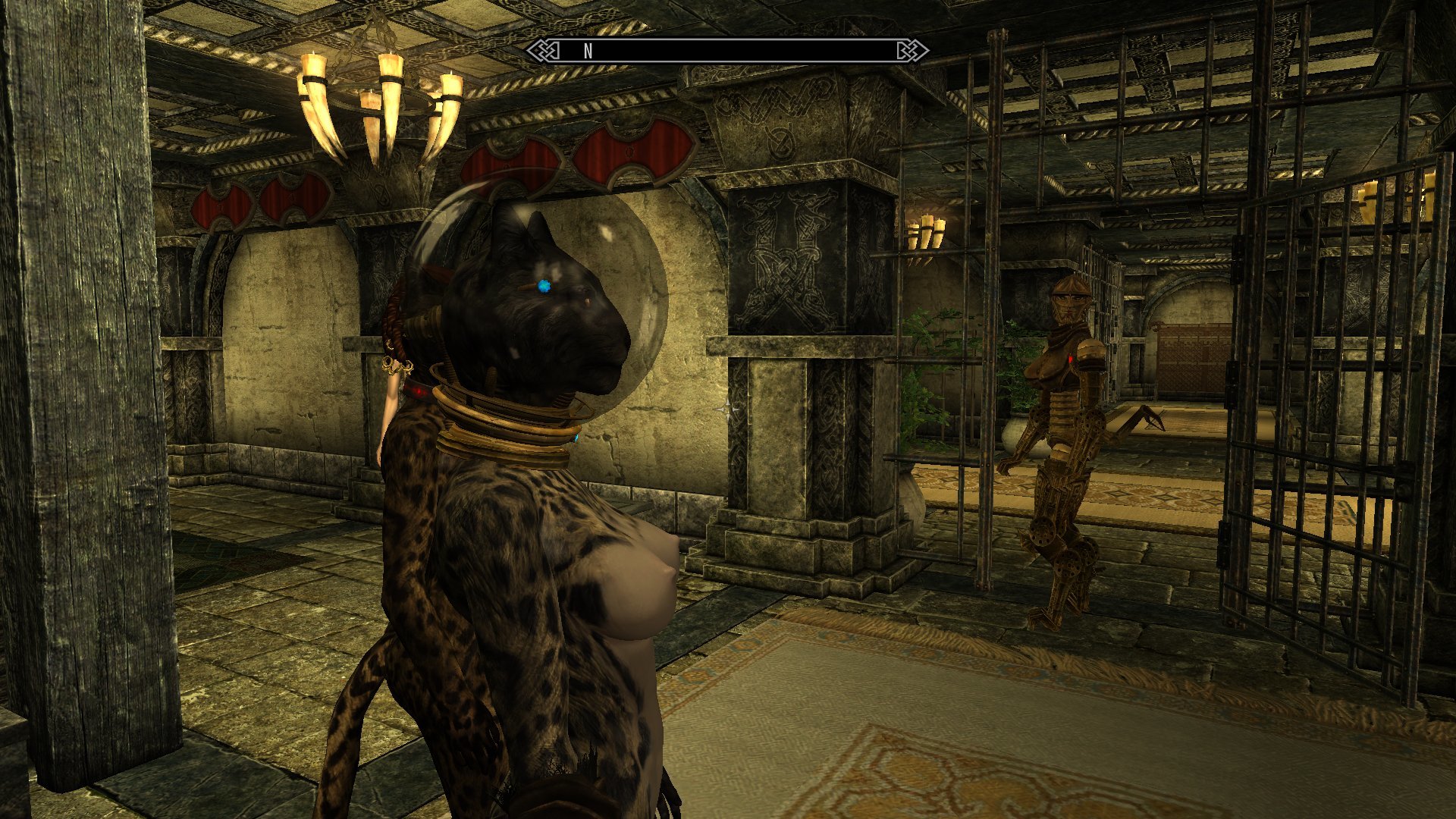 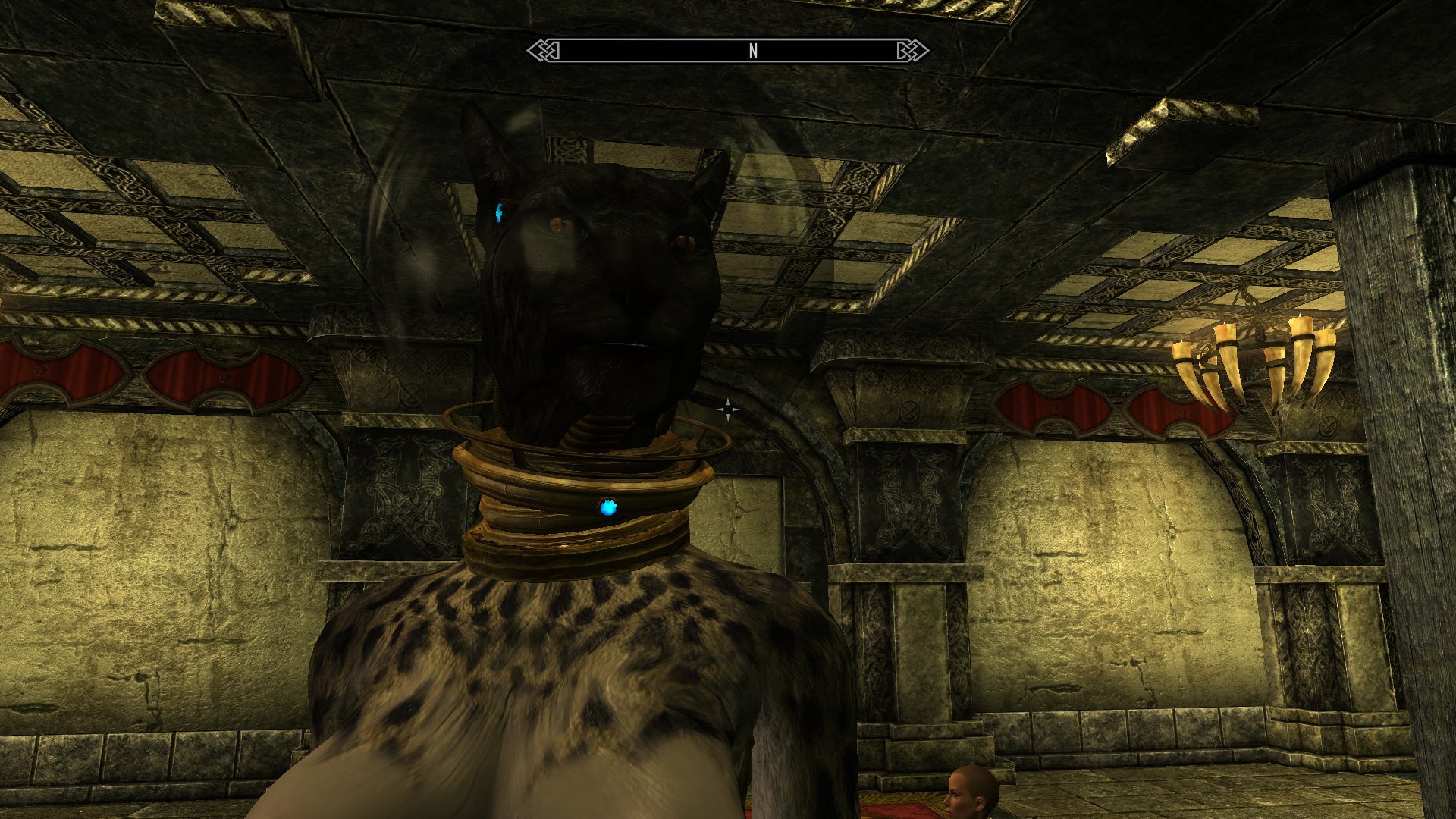 There are, of course, still a couple of problems here. The first is still the damn necks- the beast race necks are larger and more detailed and thus more prone to clipping. These have already been expanded to help deal with it, but still need some spots of touch-up. The second is the hair, or rather all the horns and jewelry and feathers and ear-tufts that the beast races use the hair slot for. They need to be disabled here for the same reason the hair is on the regular races- because otherwise it'll just clip through everything and ruin the effect- but the result for the Argonians in particular is rather jarring what with how they've suddenly got their horns sawn off and all. I'm not sure if there's any good way to accommodate that, though.

But on the upside I ended up not having to worry about finding some sort of take on the eye-plate for them, because it turns out that the beast race eyes work just fine under a transparent layer. Go figure.

One other nice little improvement: the locks from the DD gags don't have that big plate to clip though anymore. 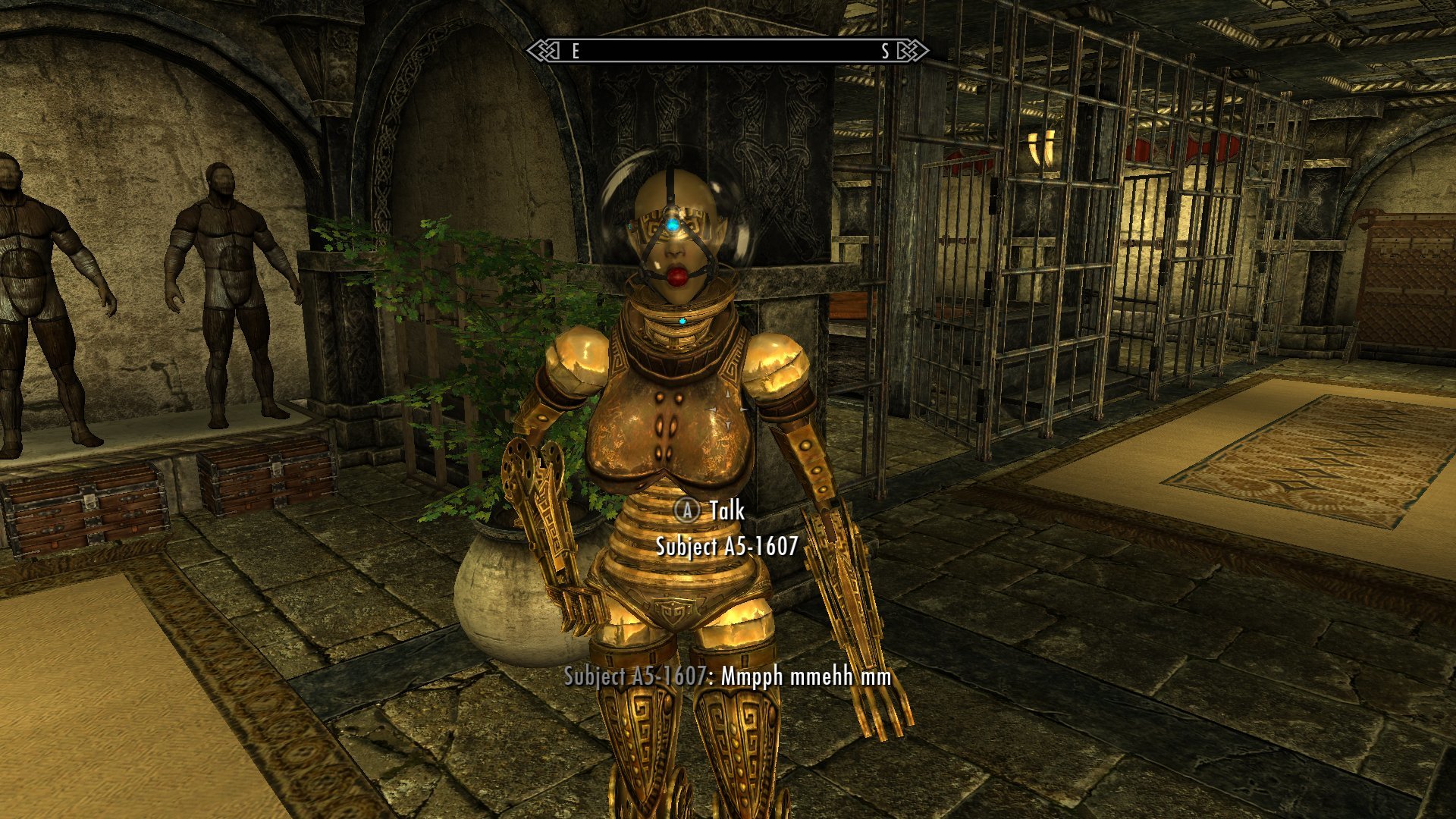 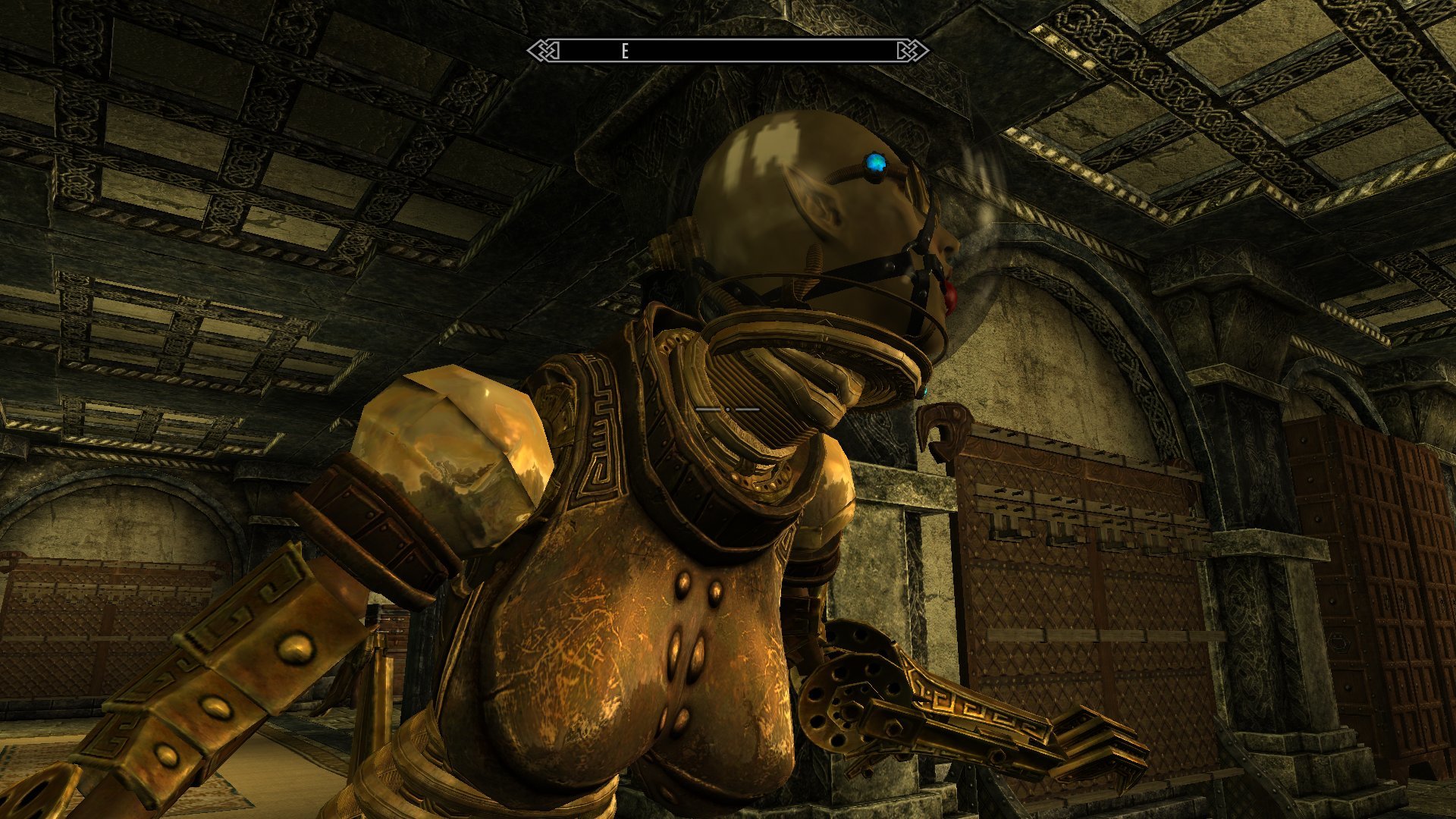 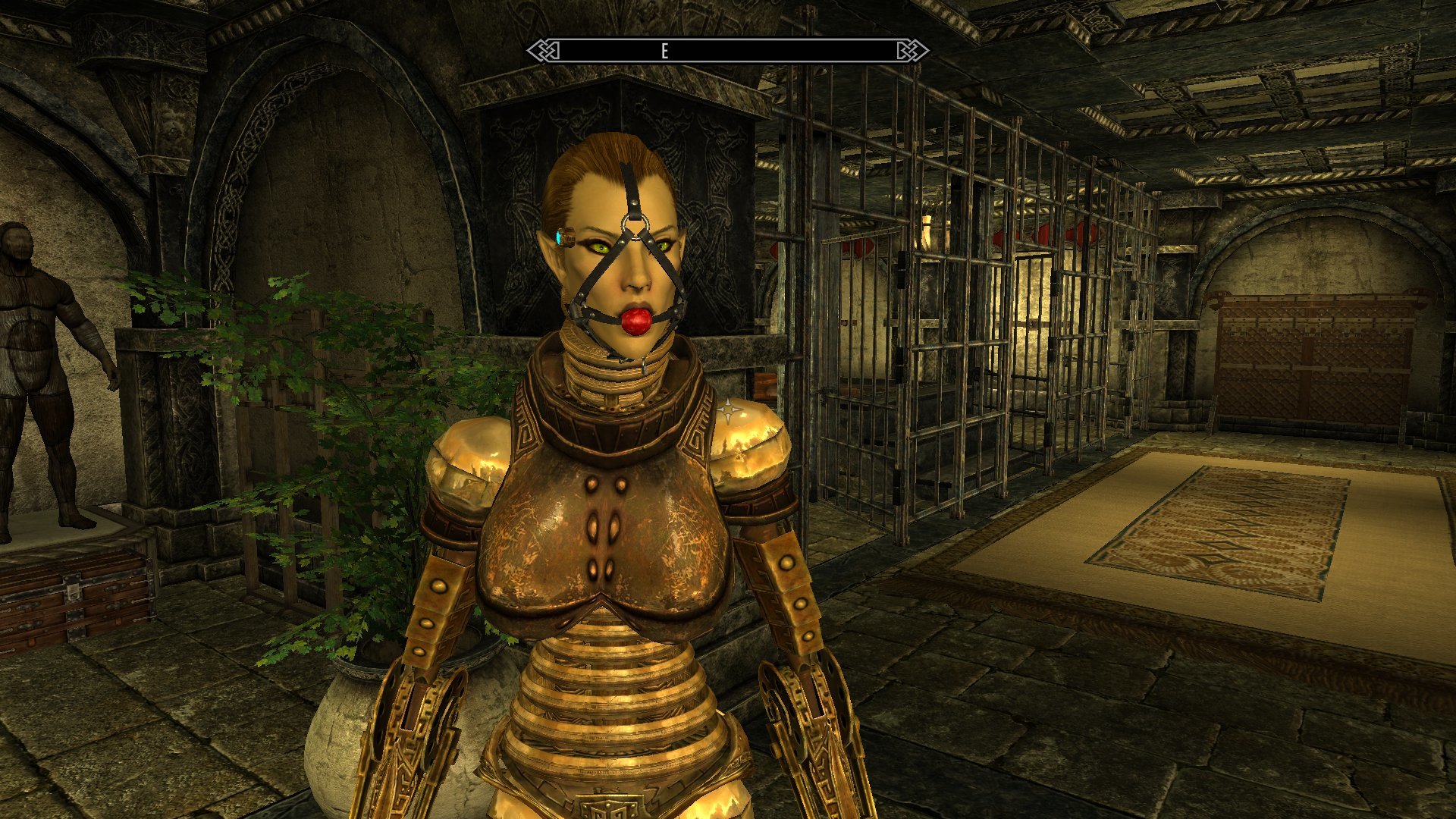 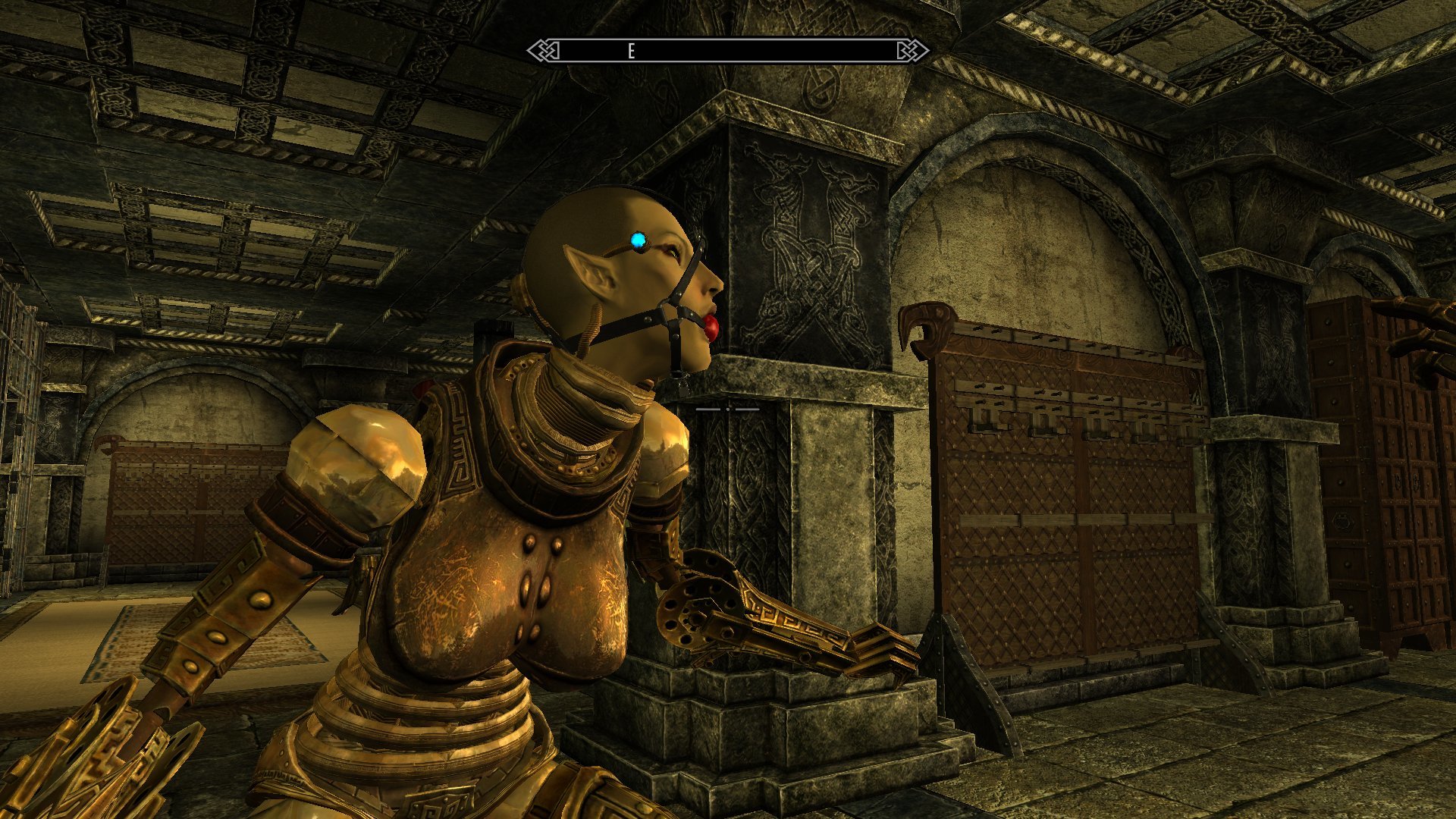 They get lost in the ring seal assembly with the jar on, and clear everything just fine with it off. The back of the neck is a bit more of a mess, however, since the top ring angles upwards too much for it to clear.

Another unintended consequence of having a 'cleaner' jar-less version like this is that it's more compatible with various headgear, but since it's also an accident compatibility it also doesn't always quite work... 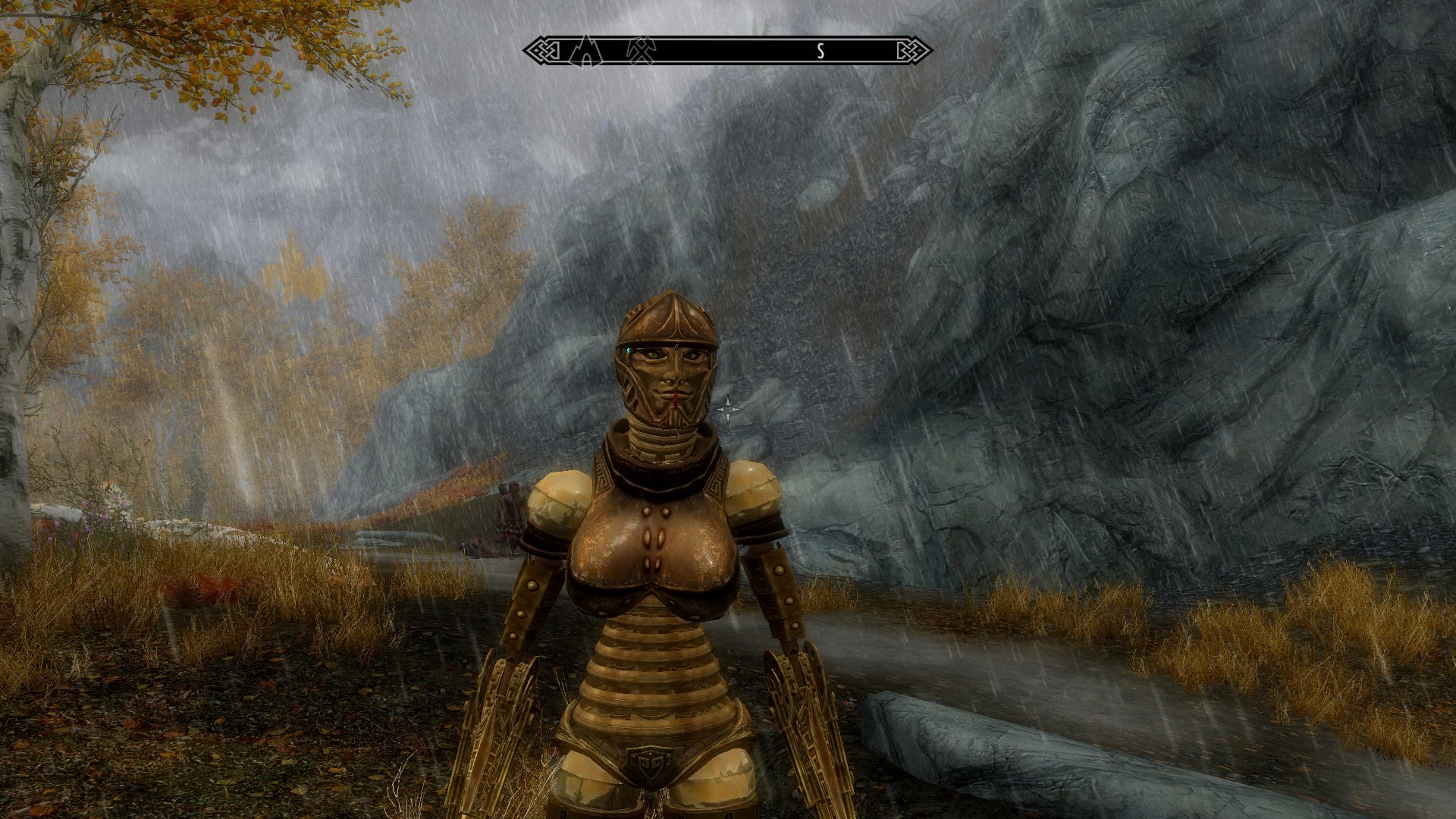 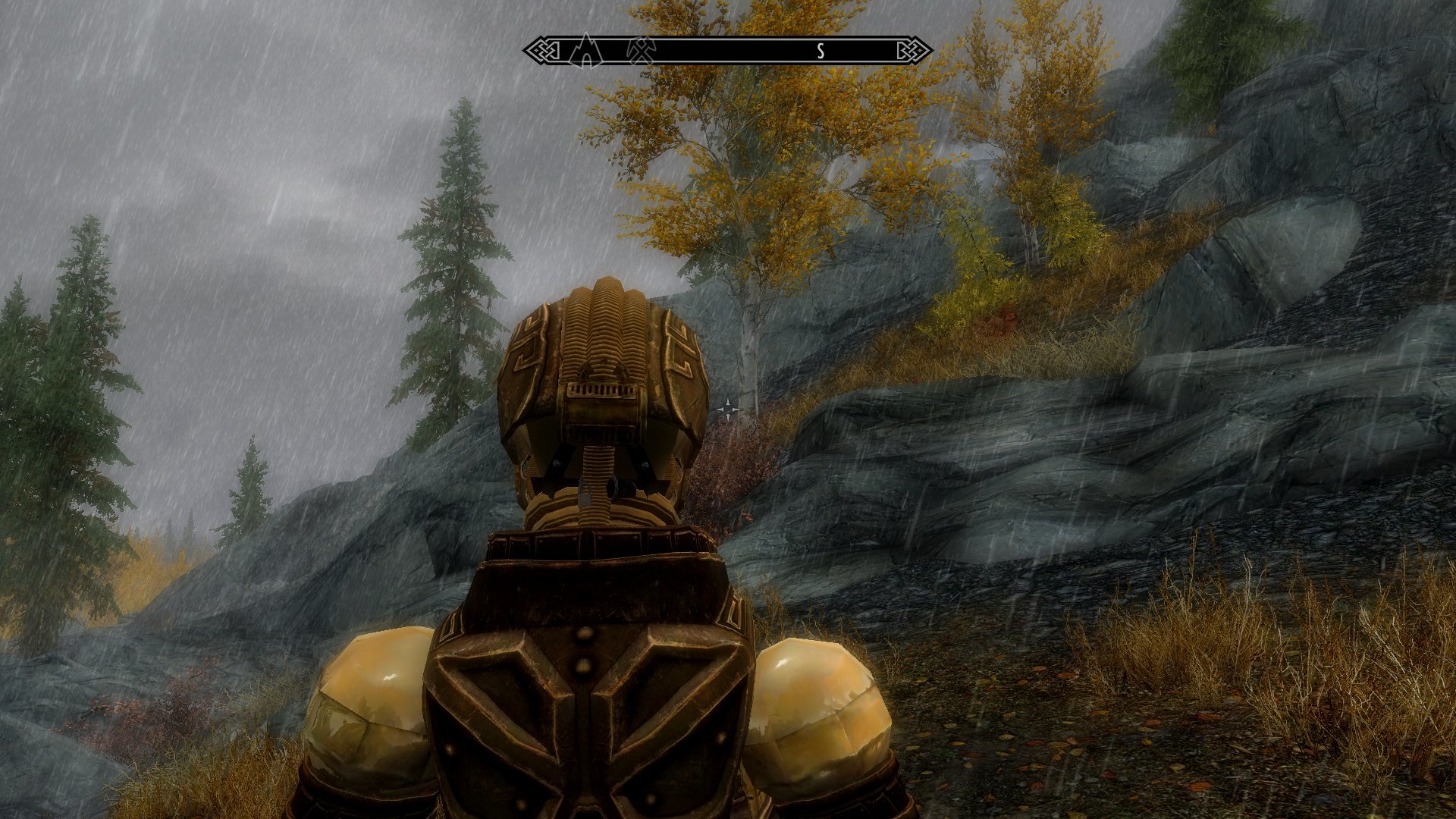 ...but it's certainly an interesting sort of thing, innit? 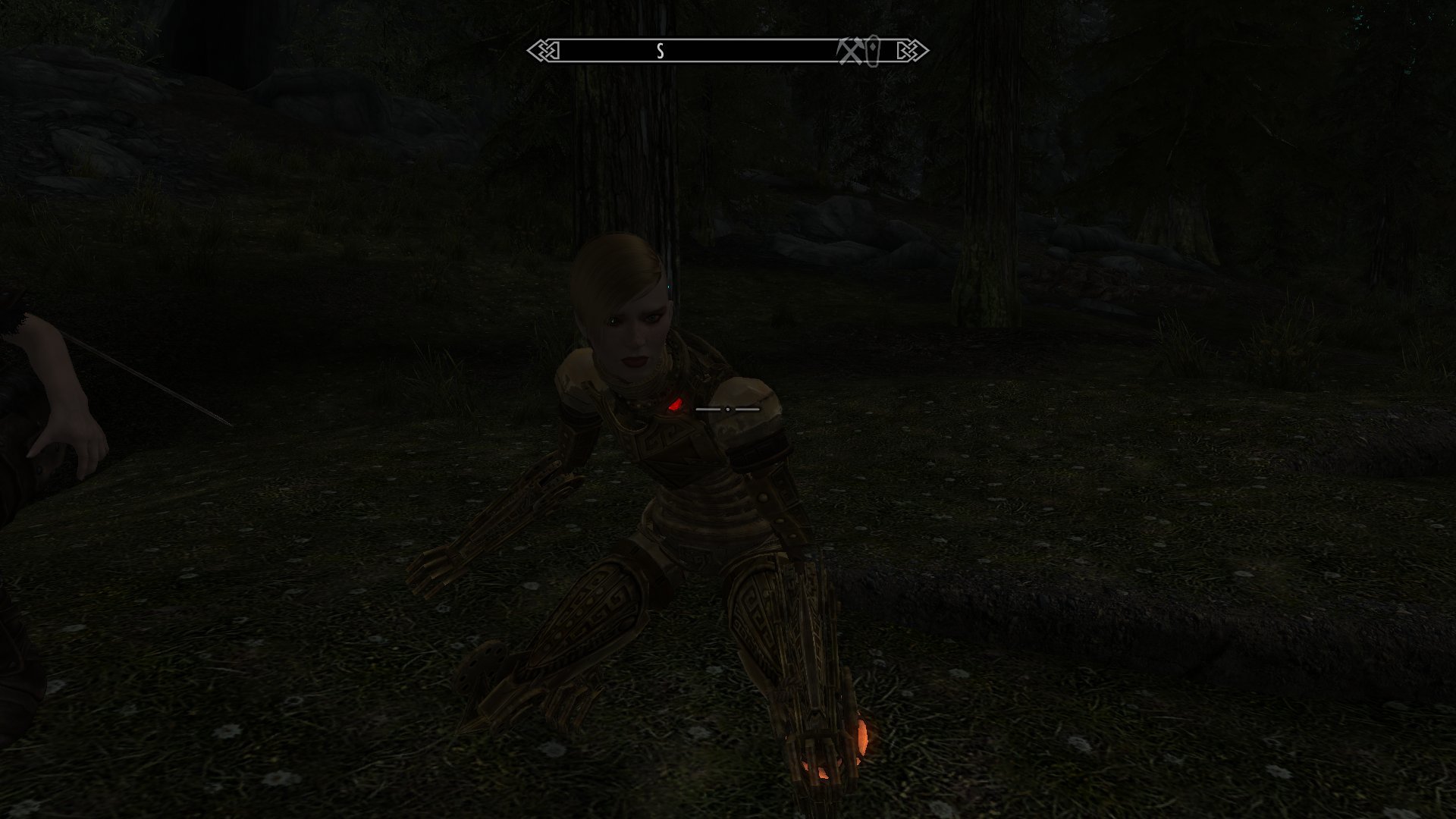