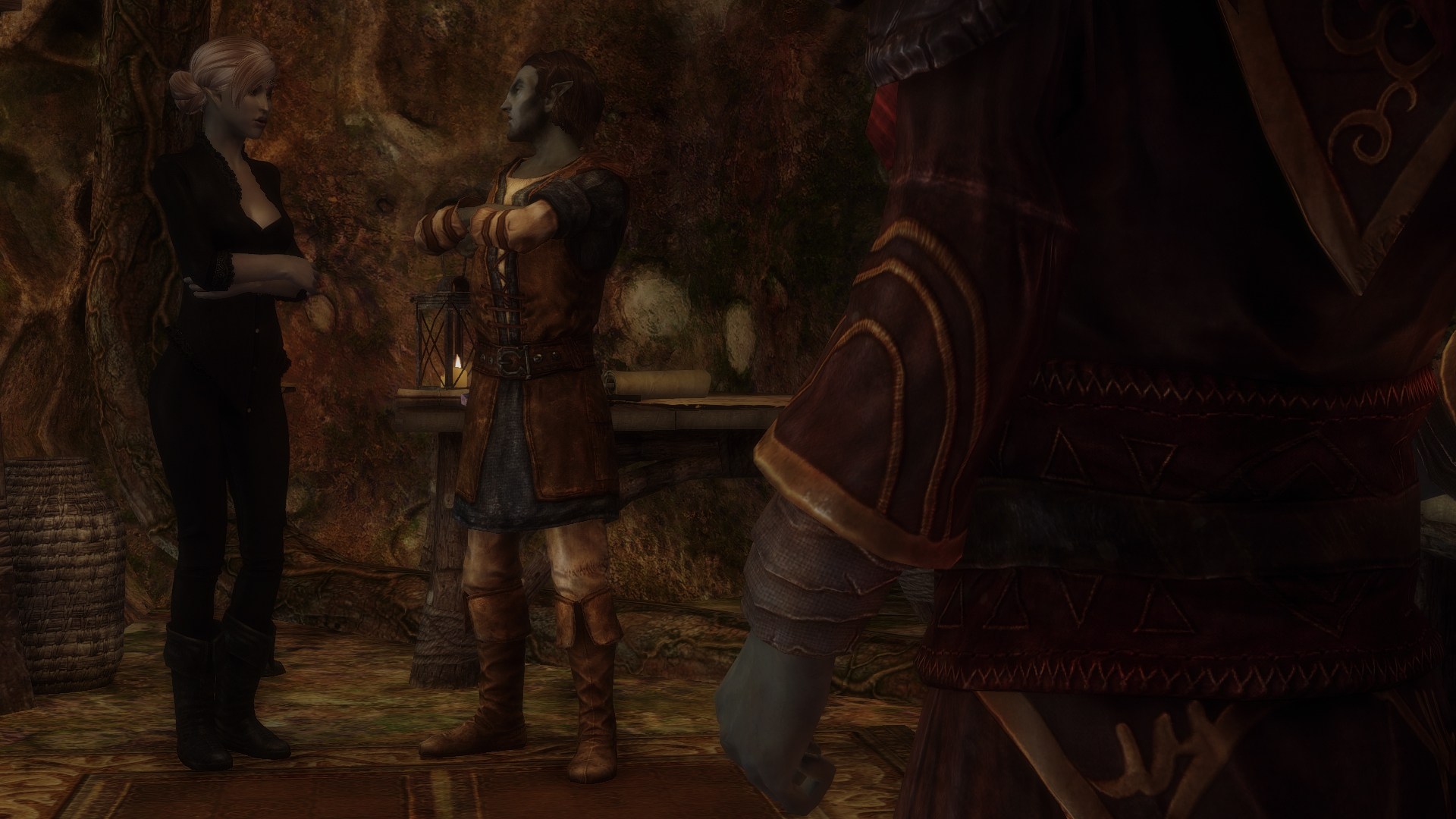 "And you're sure the proper dominance strands were in place?" Selune asked as Talvas grumbled.

"Yes!" he said, exasperated.  "The damned ash golem didn't try to kill me this time, but it just won't listen!"

Selune pondered.  "If you're still having trouble tomorrow, let me know, but it's better for you to try to figure this out on your own.  Master Neloth and I can't-"

"Selune!" Neloth interjected.  They both looked over to their master. 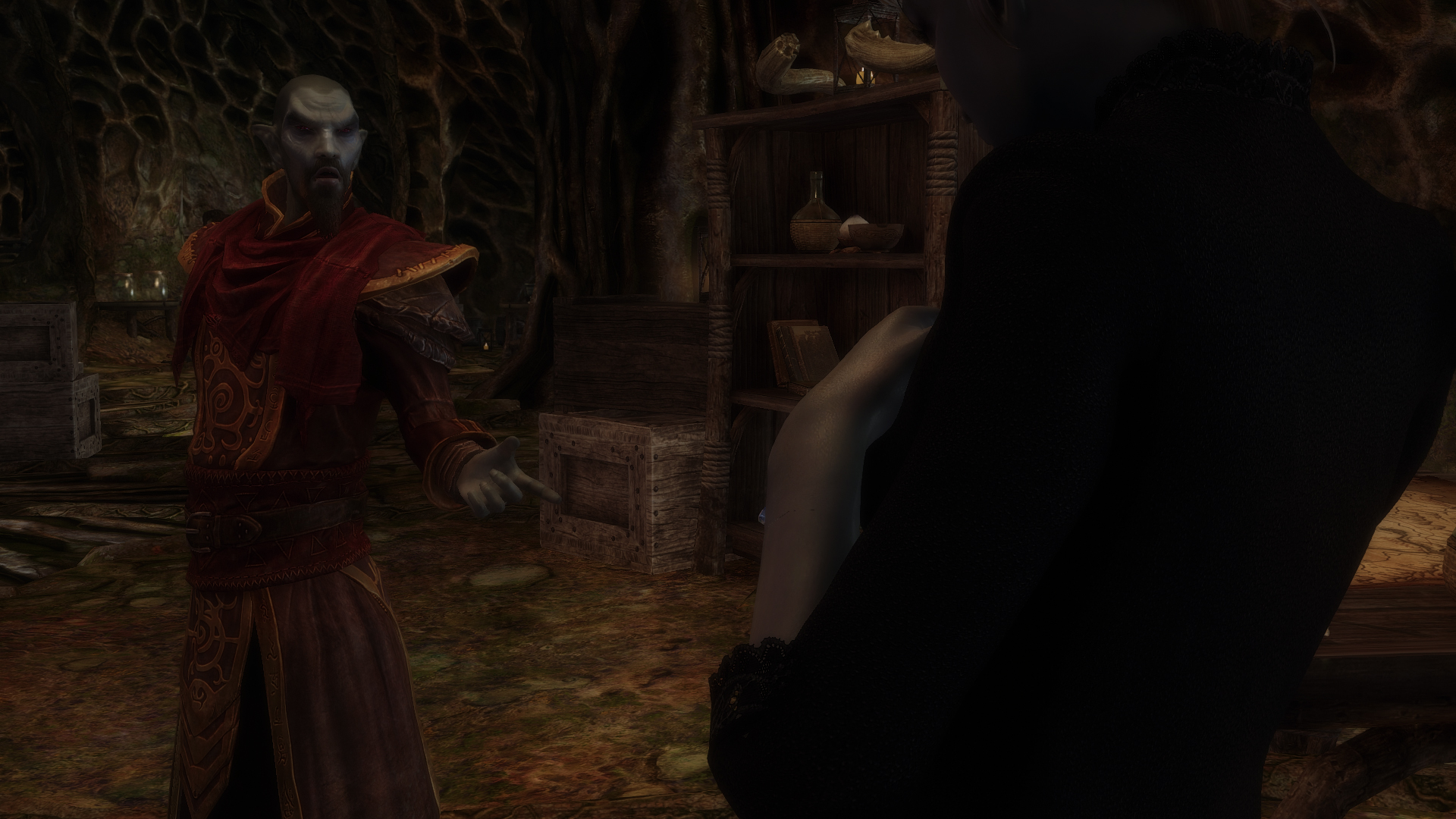 Neloth tossed a balled up wag of string and fabric at Selune, landing squarely in her cleavage.  She plucked it out and spread it out, regarding it with puzzlement.  It was a very stringy thong, branded with the symbol of the Telvanni, fabric worn down and slightly torn in places.  "Strip naked and put this on," Neloth commanded.

Selune's expression turned from one of curiosity to one of confusion.  "Have I done something to displease you?" she asked.

"Y-yes, Master..." Selune said, starting at the buttons on her top. 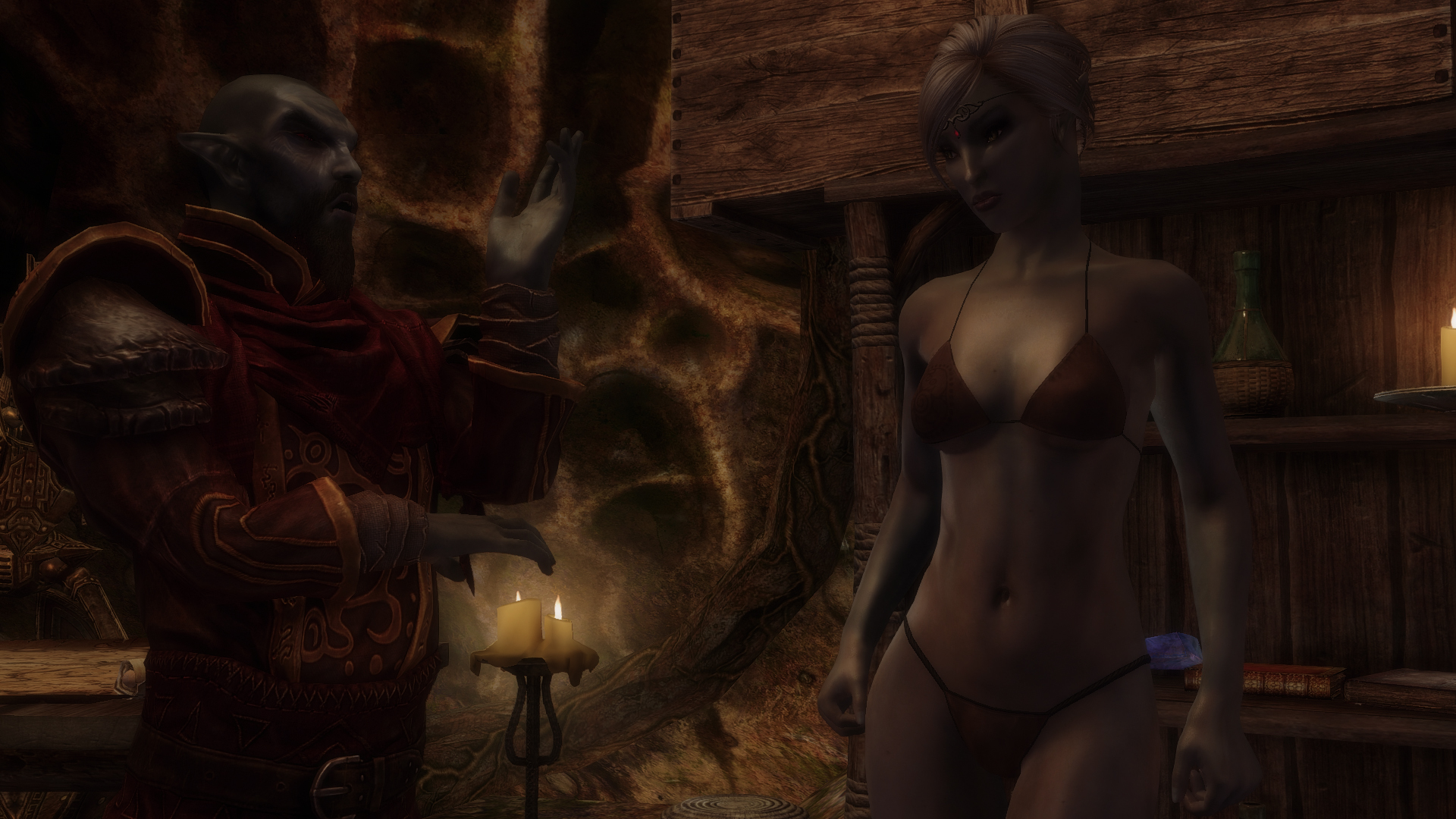 "It's insidious, really," Neloth spoke as Selune shed her outer layer of clothes.  "Obedience whittling away discipline, bit by bit.  I'm rather irritated it took me this long to see it."  He looked Selune over, catching her pausing to look at him, trying to read him.  "Don't dawdle!" he snapped.  With that, Selune whipped down her bottoms, all the while the look on her face betraying the effort she was putting in to figuring out what she might have done. 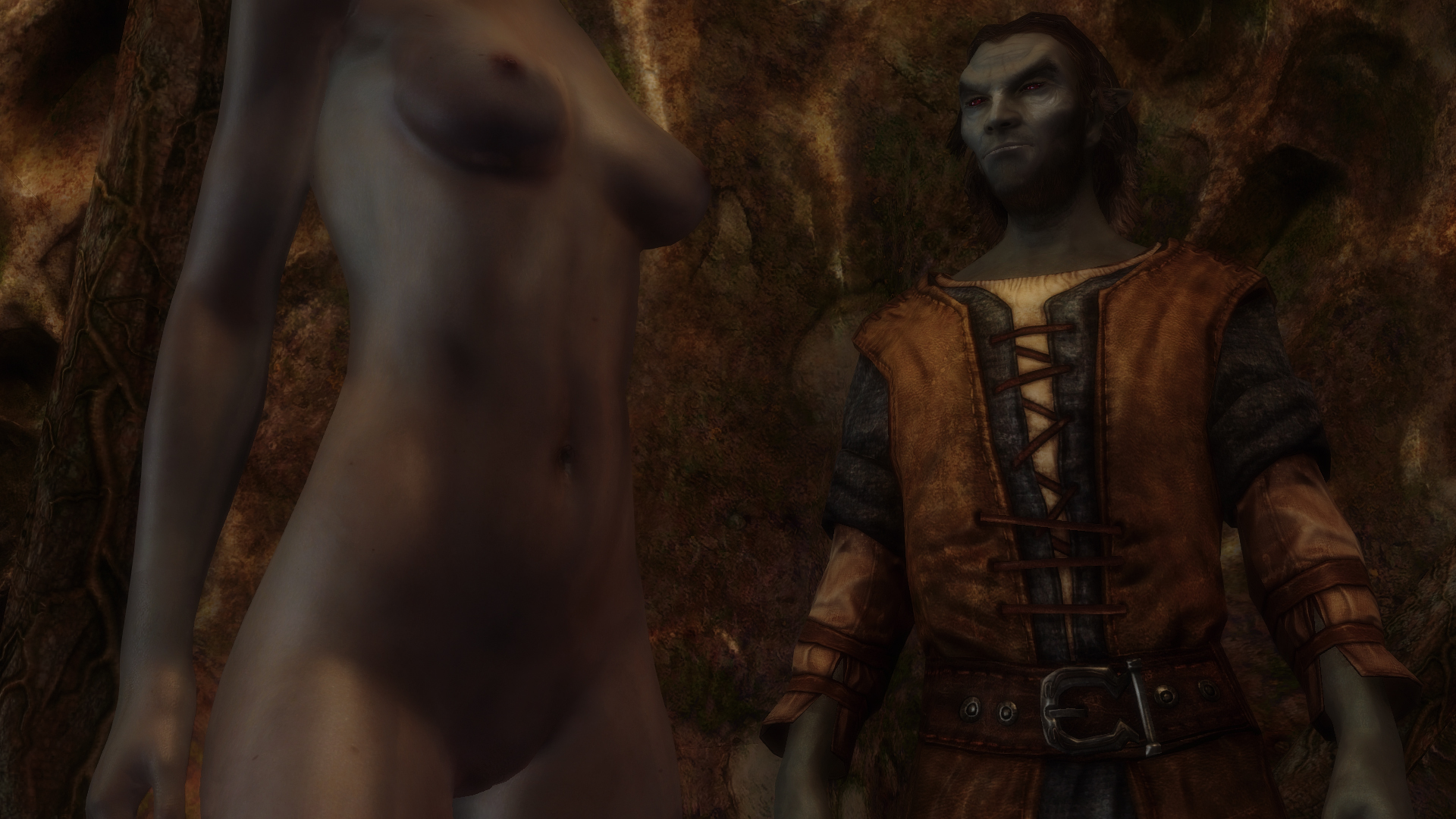 Talvas, meanwhile, grinned like an idiot.  The boy never grew bored of seeing her naked, it seemed.  It was a sight he'd seen a thousand times, but every time his face twisted into an expression of dumb amusement. 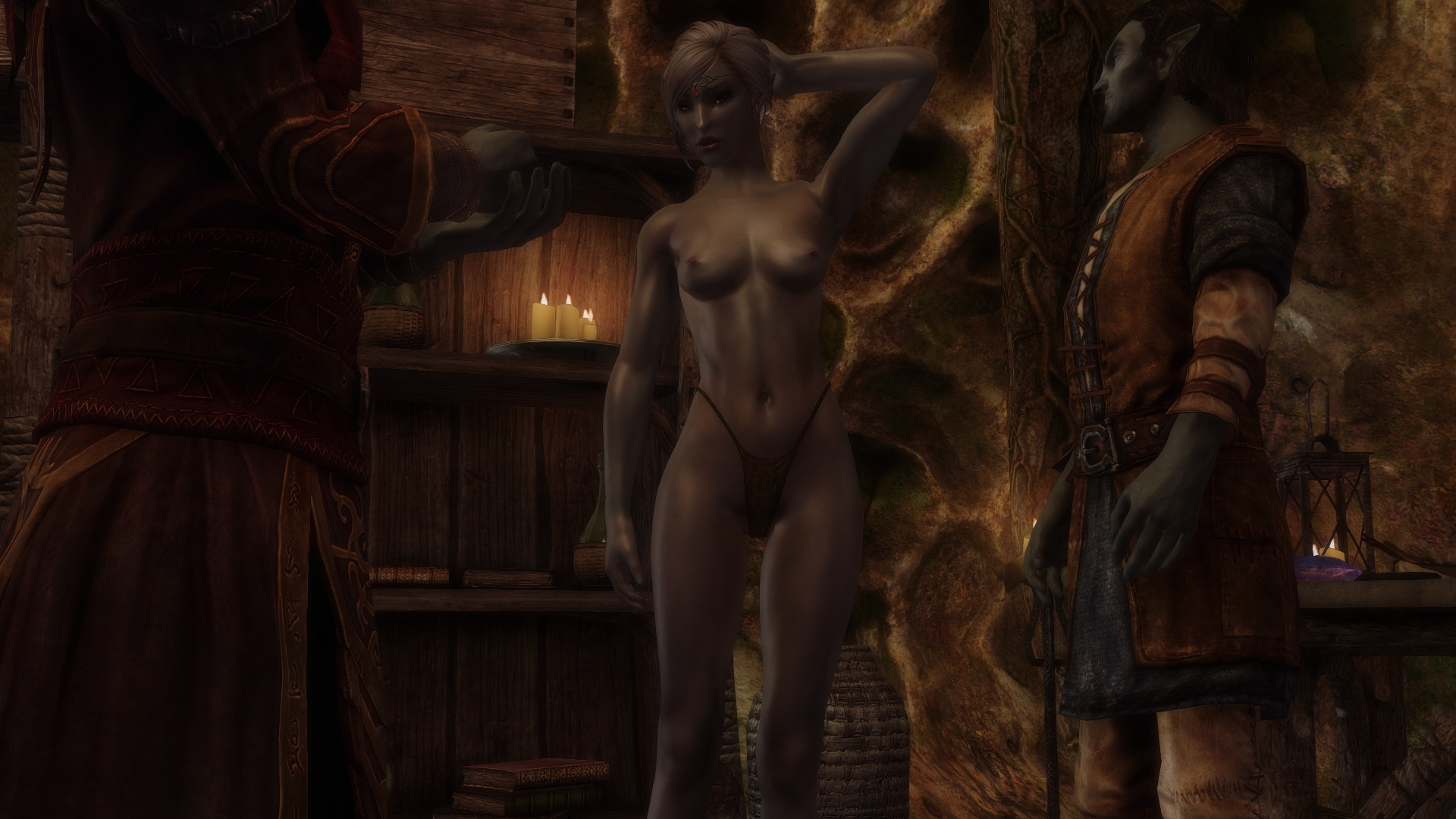 "Does this please you, Master?" Selune asked as she made a few adjustments to the thong.

"It's a start," he said.  "But you aren't finished yet.  Kneel down in front of Talvas."  Selune and Talvas exchanged glances. 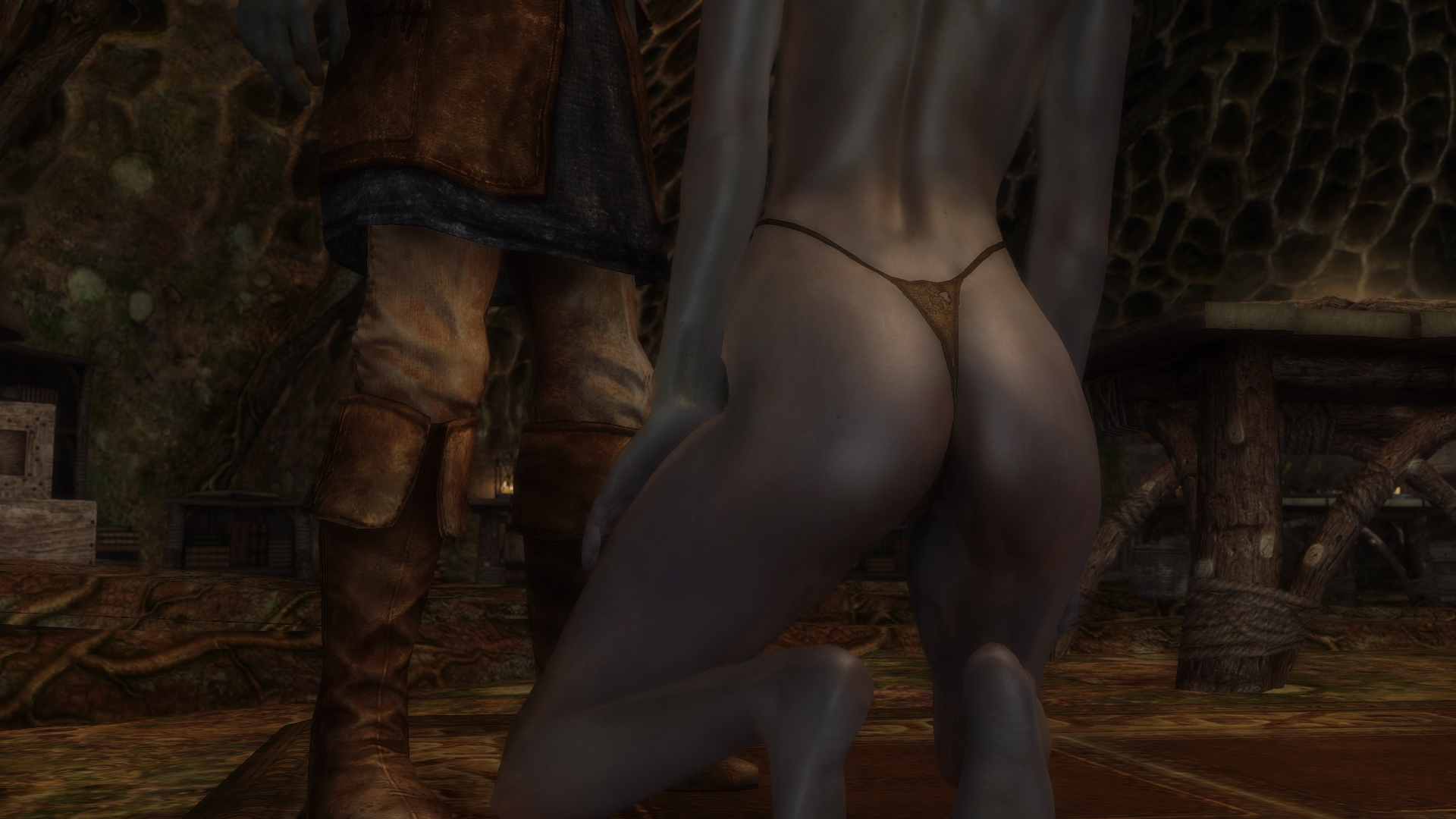 "Talvas was my apprentice before you," Neloth said.  "Though he is objectively the inferior wizard," - Talvas frowned - "your relative skill is irrelevant to your status.  Pull his cock out and kiss it - consider it display of your position in our organization." 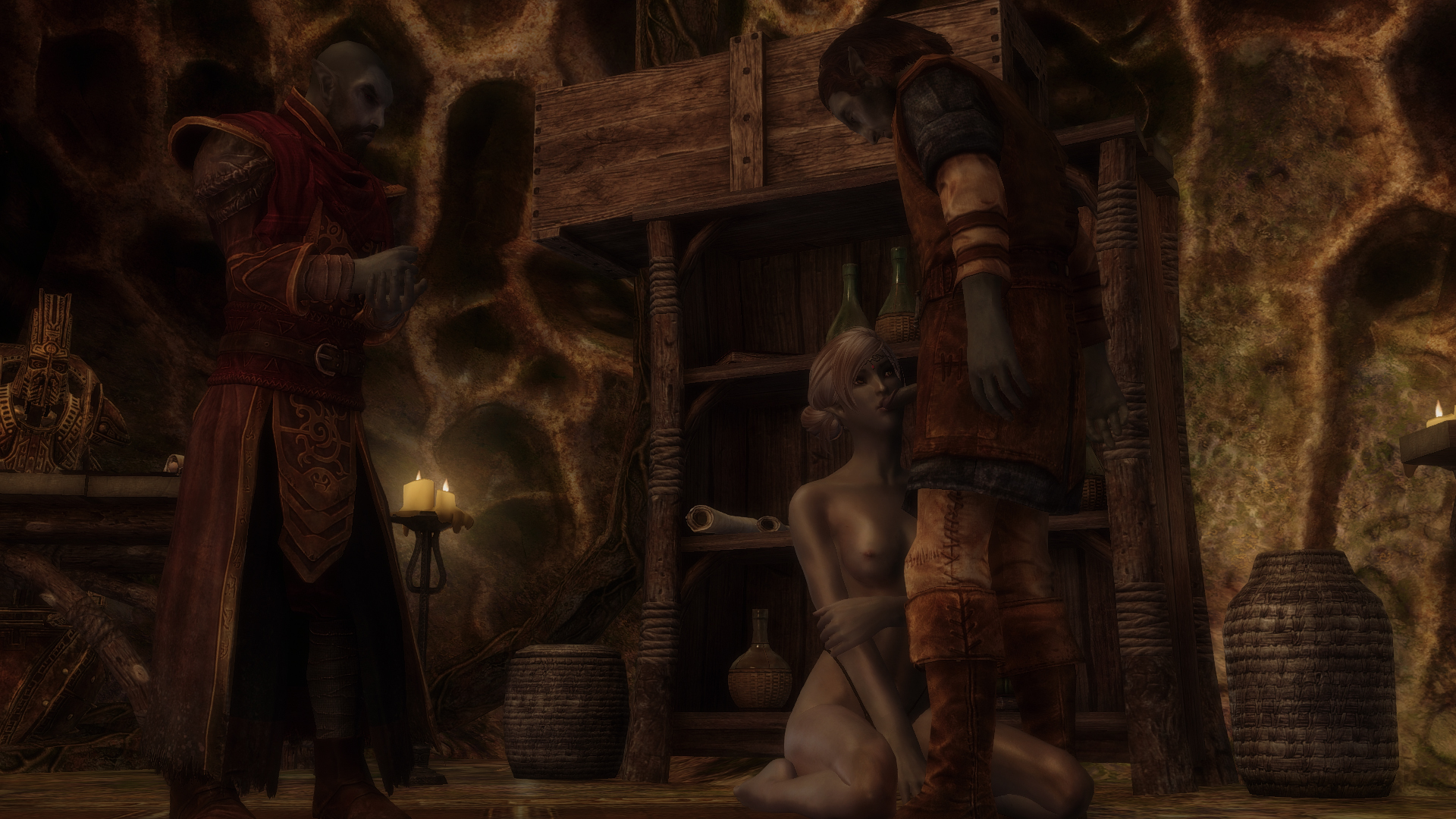 Selune was beginning to piece her situation together as she did as she was commanded, daintily slipping her slim hands under Talvas's long shirt and into his pants.  She quickly found his already turgid member and pulled it free from its confines, letting it spring free.  She gazed at it for a moment, then up at Talvas, before leaning in and placed a long, slow kiss on his tip.  A rope of precum trailed between them as she pulled away.  She looked over her shoulder at Neloth, but before she could confirm her suspicions, Neloth gave another command. 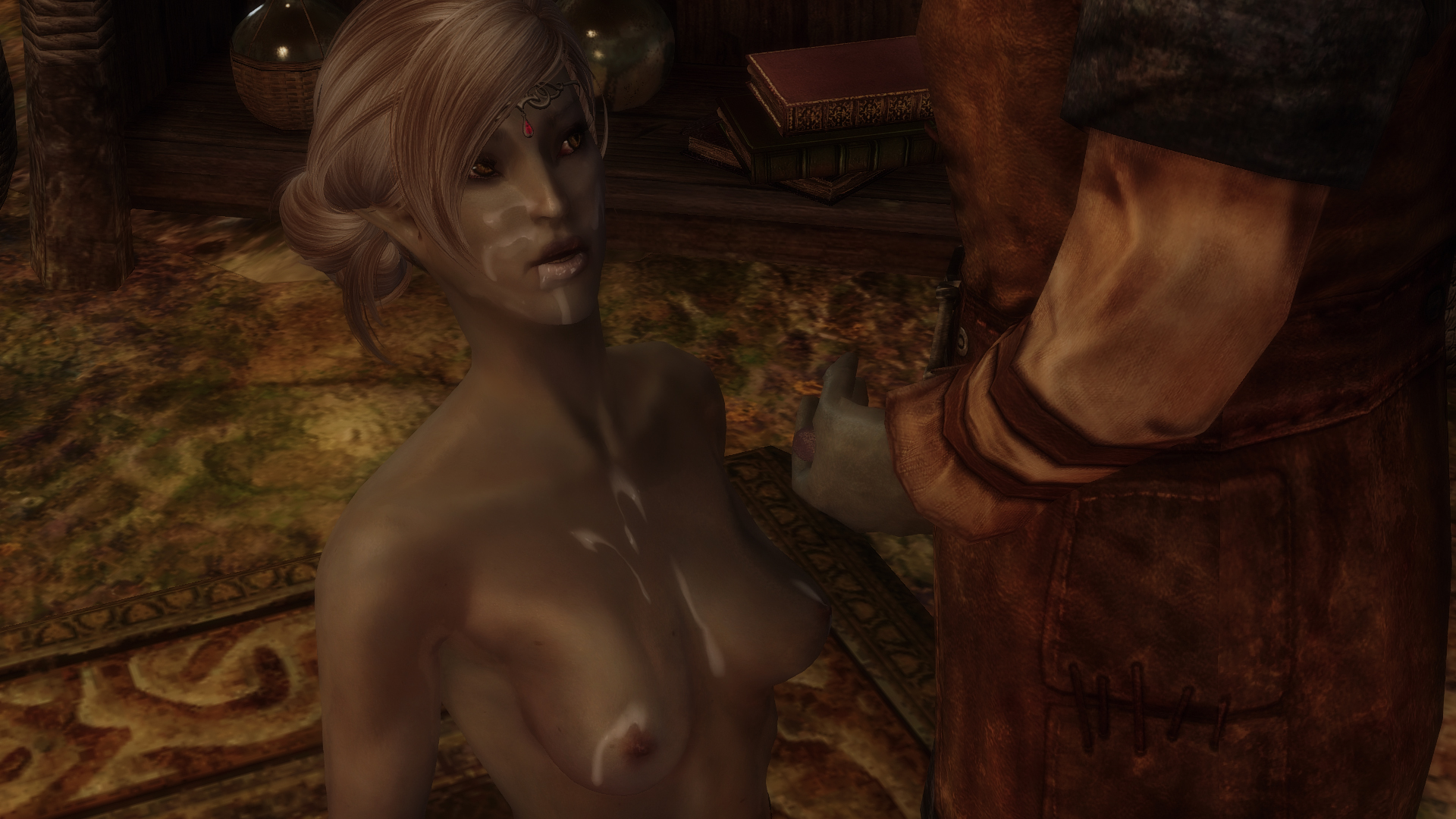 It didn't take him long to comply.  Selune winced as the hot, ropey strands decorated her skin.  Talvas groaned and wobbled on his feet.

"Good," Neloth said.  "Now, Selune, stand up and tell me how your new uniform feels." 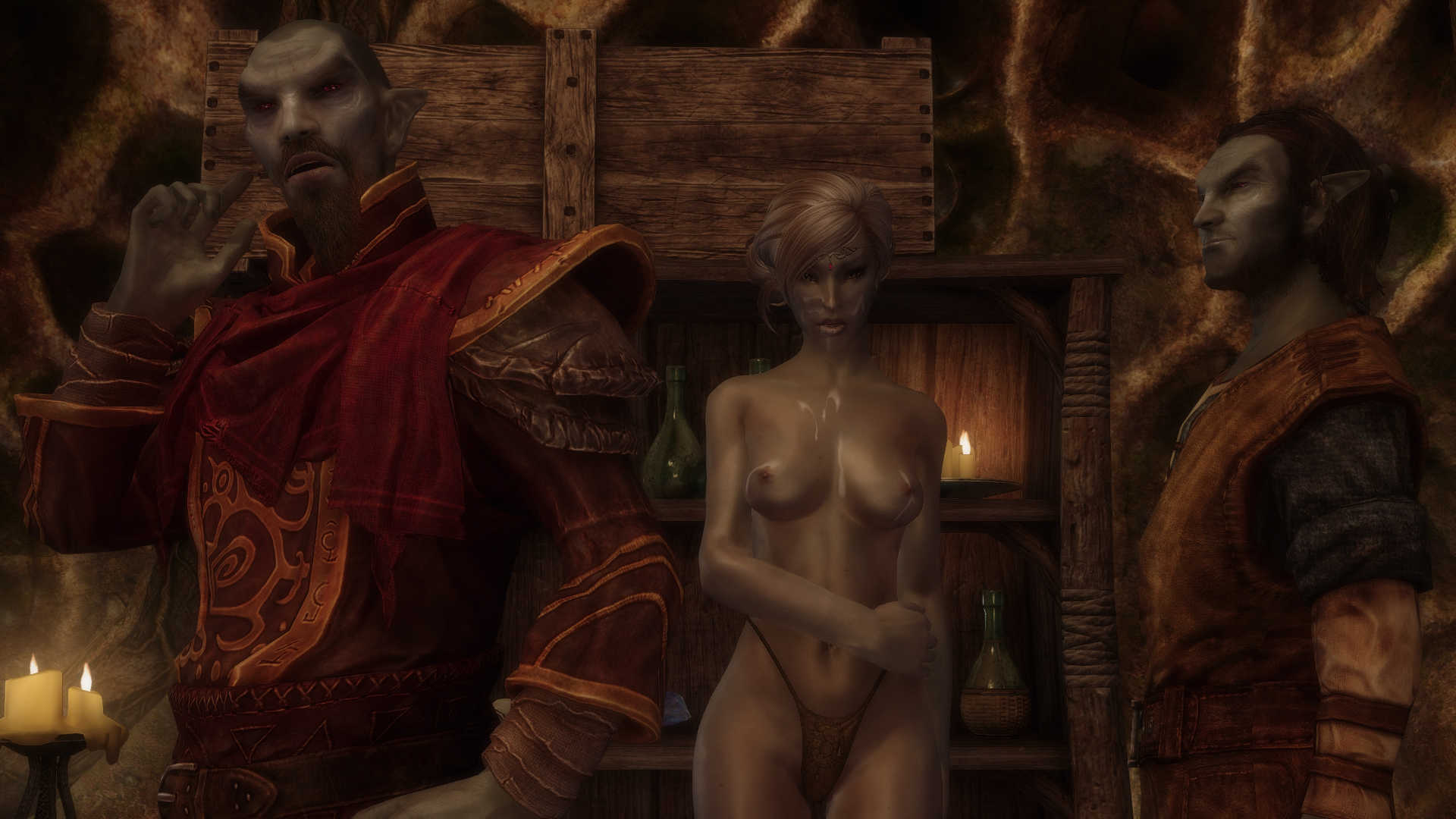 "My... ah..." she started, but she caught Neloth's gaze narrowing.  She sighed.  "If I'm being honest, thongs were never my favorite.  That said, the fabric is quite soft, and I admit the high waist has a certain charm to it."

"How does it feel, Selune?"

She frowned.  "It's getting cold quickly.  It tickles running down my skin.  Mostly I just feel dirty."

"Yes, Master," Selune said.  "May I ask what brought all this about, Master?  I think I understand, but it seems so extreme."

Neloth spoke with a frown, "Simply put, I grew too lax.  Your original contract was intended to ensure your place was clear, but as time went on, you gained more and more privileges until you could be mistaken for my primary apprentice.  Your skills and experience are still valued.  However, order is a critical aspect of any magical studies, and as such, I must maintain order in my facilities."

Selune understood.  This was, after all, what she had agreed to.  Still, it was upsetting to have her hard-earned privileges stripped away all at once, figuratively and literally. 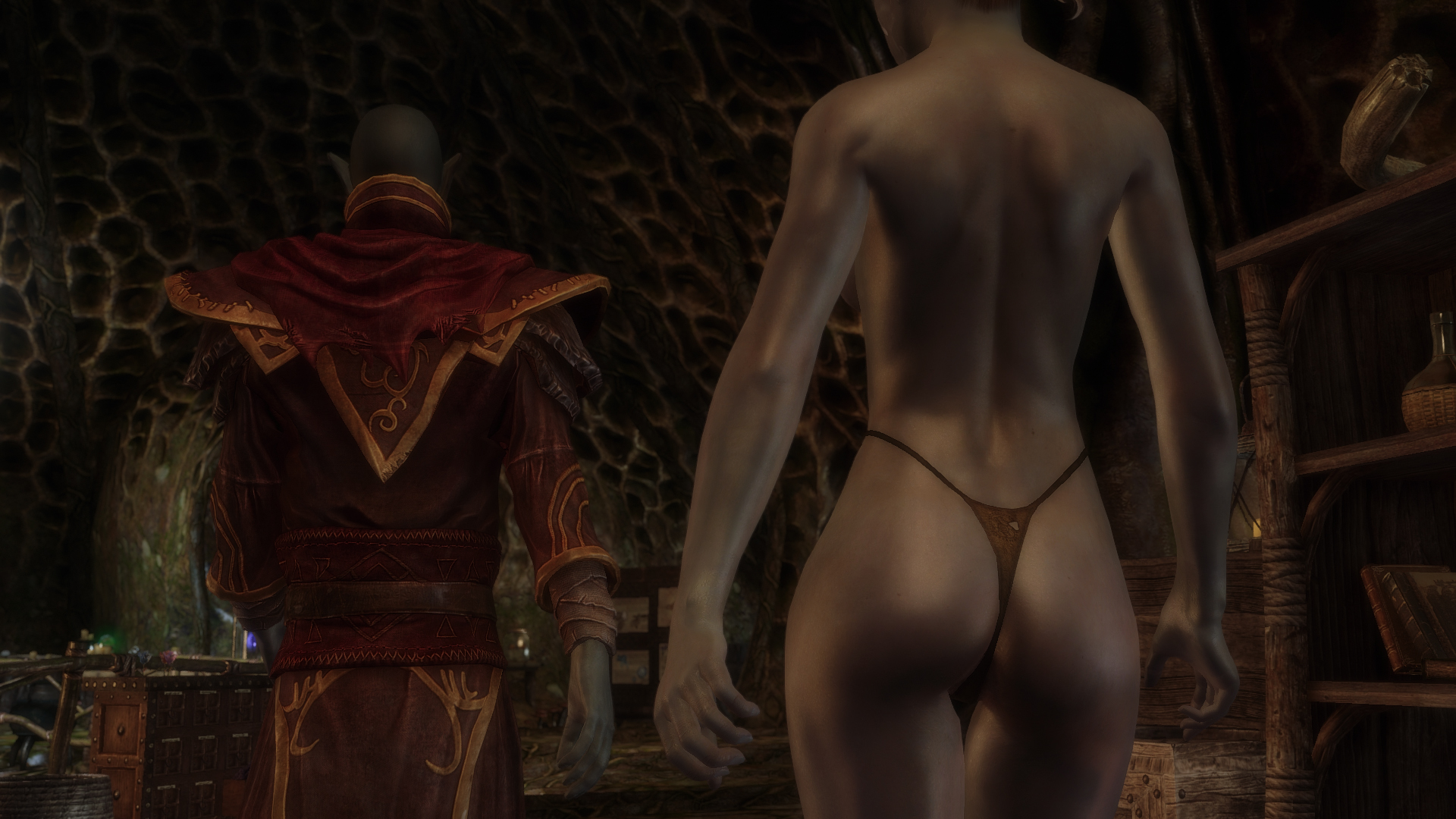 "Excellent," Neloth said, "Now come along, there are soul gems for you to categorize."