Got a bit bogged down this week. Wanted to make new horse and dog themed helmets to go with the beast limbs, but just couldn't manage to get something I liked put together from the parts I have available. I'll probably give it another go in the future, but they ain't gonna make this release if I want to get it out any time soon. Which is more than a bit personally annoying, since I managed to get everything else for the theme built.

Of course, a big part of that everything else also hit a hiccup, as I ended up losing a day's work and having to re-do a major part of the .osp file editing/clean-up for the bodies. Did you know that if you accidentally delete the first line of code from a single one of the sliders Bodyslide'll no longer be able to read the entire file? I sure found that out! Didn't figure out the reason until after I had re-done everything, unfortunately, but on the upside that let me fix a bit of future-proofing that I had missed, so it's a bit of a wash.

But with that re-done, I should be able to preview this update's real big trick soon-ish. Still got some peripheral stuff to put together, and I'm still indecisive about exactly how I'm going to implement things since it's a significant departure from my pre-existing structure, but the core is finally built and I can move on to it's testing.

I've been testing some of the other recently-built parts right along, of course. Had a bit of a 'durrr' moment when I realized that I never checked to see if the vulva modesty plating cleared the hip cap for the Gynoid bodies. Surprise, it didn't. 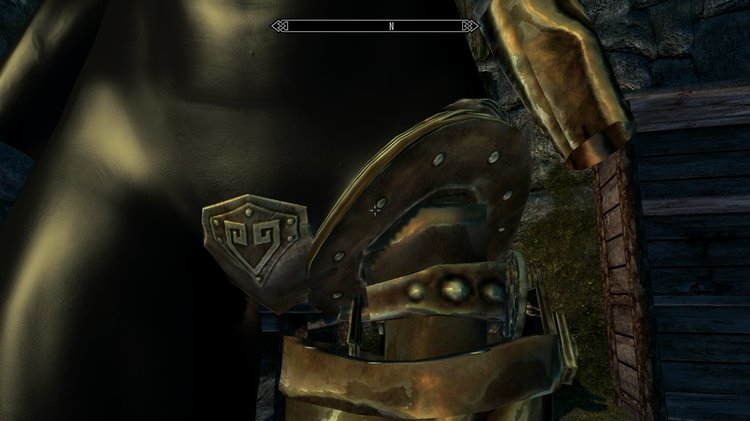 Fortunately it was mostly due to the arc on the part of the plate that normally gets buried into the leg, so it wasn't too big of a deal to flatten that out and get it out of the way. Although I do feel it's left the apex more sharply angled. 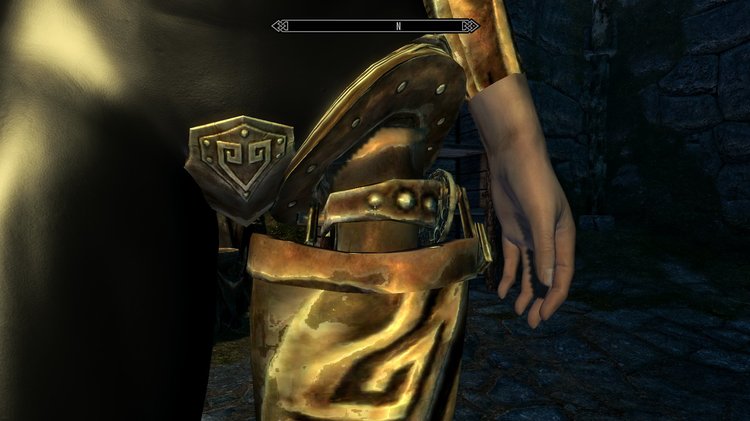 Not a whole lot I can do with that, though, since the original mesh is just too low-poly for any real fancy fine-tuning. Which also means that there's not a whole lot I can do to fix the breakthrough I've been seeing from the vulva during crouching; there's just not enough mesh where it needs to balloon out to clear those bits. So unfortunately you're going to have to ignore that, or do what I did and toss the 'NotSoObvious' version of this sneak animation replacer into a PCEA2 folder. It uses something similar to the combat magic pose to give you a more natural sneaking walk and also has the bonus of not deforming the pelvis as much as the normal deep crouch, which clears up problems with a lot of underwear meshes. Only real downside is that it doesn't have a stealth bow animation set, so you kinda jerk down into the crouch when you use those. But it's otherwise pretty nice.

Also been trying to throw together an actual playthrough character during my moments of frustration with building stuff, since I never really got a chance to try out AHO before the computer change. I've come to the conclusion that one of the things to add to the 'this mod could really use' pile is its own Alternate Start scenario. I mean, the Sexbot scenario in CCAS is fine, but a), I've used it like a dozen times by now, and b), it's player slavery-centric, which isn't really my thing. I'd prefer something more along the lines of a novice adventurer stumbling into a still-active cyborg conversion machine. Either starting with you popping out of it, or even better a full mini-dungeon inevitably leading into it. Of course this all would be well outside of my current modding skillset. I don't even know where to begin building an Alternate Start, much less stuff like deciding exactly which cyborg parts the player would end up with, how far it would be customizable, etc. Or adding the player to the Automaton faction; the Sexbot start does that, but is it something that has to be done right at the start, or can it be built to only happen when they get cyborgized? And I'd have to throw together some NPCs for it, at least some using the full-robot bodies and replacement heads, maybe for enemy units pre-player conversion, and some other recent victims post-conversion. That last part gets me thinking in terms of followers and a player home base, which butts this idea up against my previous vague ideas for a questline, which were largely the same shape but had the player joining up with an NPC novice adventurer outside of the cyborg dungeon and chasing her as she gets snatched and altered, with an option for the same thing to happen to the player by the end. But making a fully scripted quest like that is even further outside of my skillset. So it's certainly not something I'll personally be able to get to any time soon.

Would be neat to see, though.

Oh, and since I realized I never posted a pic of the short Bikini set legs without the disembodied feet left in the way, here's that. 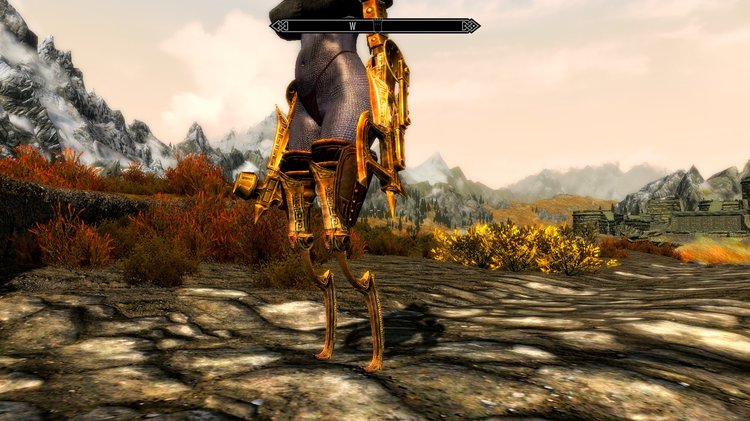 Just try not to murder your girlfriends.