So, I changed my mind about the Centurion arms. 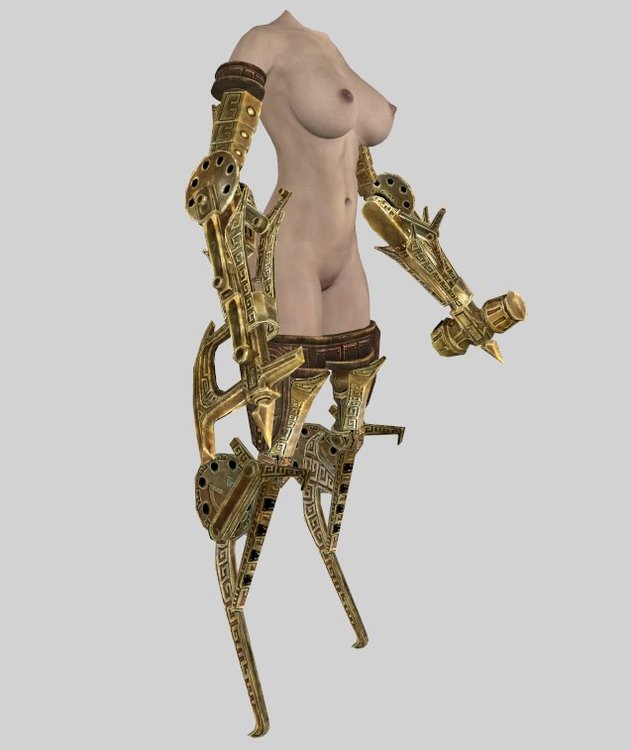 I was going to just leave them in the position they were in when I ported them over from the Centurion model, but the more I looked at it the less I liked it. I still kinda liked having the cleaner side of the arm upwards, but having the axe blade-upwards in particular was getting on my nerves. But I also didn't much want to have to redo the mask-and-move process for the altered levers, so I took the lazy way out and swapped the arms around. A hammer's a better off-hand weapon, anyway.

Having the busy side of the forearms upwards works a lot better in first-person view than I expected, too. I certainly wasn't expecting the levers to notch into the central part as well as they do, for one thing. And I think it just generally improves the visual balance. 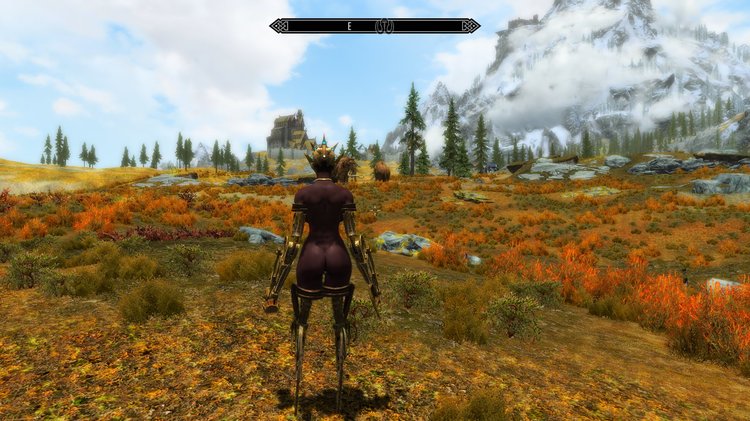 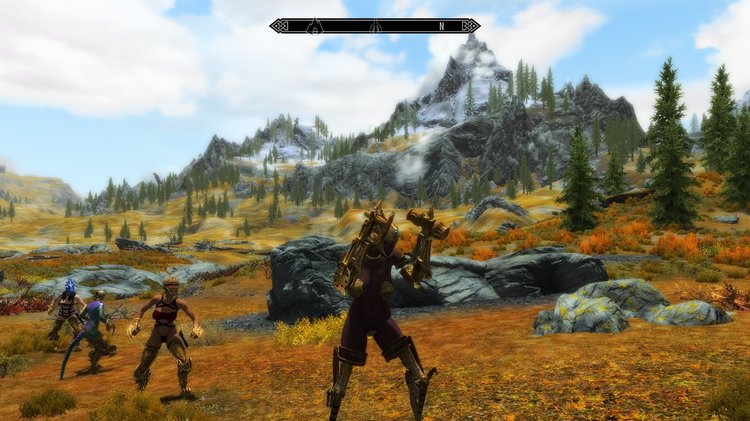 I also had some thoughts about an invisible weapon to use with this. The collection already has invisible versions of the Dwarven sword and axe buried in it for use with the Blade arms, made by simply deleting the mesh from the .nif file and setting the '1st person model object' to 'none' in the Creation Kit entry, but you'd be forgiven for not having noticed them. They don't show up in Add Item Menu, so you have to use the console to get them. I honestly forget they're in there myself half the time. But I remembered reading somewhere that this is actually an intentional bug in AIM, added in because there were reports of crashes when viewing similarly meshless weapons from other mods. So my first thought was to replace the mesh with some kind of shrunken-down token, probably a tiny copy of the Dwarven insignia from the Sphere, that could get lost in the hand area. But getting that positioned exactly right seemed like a pain, and what would it do when it was 'sheathed'? Then I thought, why not just make the existing weapon itself invisible? Open it up in Nifskope, crank the Alpha setting on the textures tab all the way down to zero, and boom, one invisible mace.

But then I tried to put it in-game, and found out that my bigger problem is that the way the weapons are built in the Creation Kit is kinda stupid.

If you go to the 'Weapon' list under 'Items', you'll see the entries for all of the weapons in the game. Open one up and you'll get all its data, but the relevant bit here is the model info in the 'Art and Sound' tab.

That 'model' path there? That does jack shit. It may actually be for the inventory model, I haven't played around enough with it to be sure. The only thing that actually matters is that '1st person model object' line. Whatever it's pointed at is what you actually see on your character in-game, not just in first person but also in third person, both equipped and sheathed. (And if you ever want to, say, vaporize an instance of that god-awful iron weapon 'sheath' that a modder reused instead of making a proper sheath model for their weapon, that's what you delete it from.) If you re-point the model here and change the model object to 'none', AIM won't register it, as that's apparently the specific cause of those crashes. If you re-point the model but leave the model object as-is, you just get the vanilla weapon in-game. So you have to change the path for the model object, which means you have to change the entry for that. But you can't change it here, as all this accesses is a drop-down list of the Model Object entries. And you can't open those entries from here, like you can with the ArmorAddons in the armor set entries, so you have to find where these are hidden. And where are they hidden?

Down in the frickin' 'Static' list under the 'WorldObjects' heading, 'cause that makes sense.

Even when you open it, 90% of the data in the entry is related to world object information. But no, this is where your actual weapon mesh is hiding. Bizarre. Once you re-point that model path you can change the ID, and then you'll finally have a functional new in-game model to add to the main weapon entry. And only then, after all that ass-backwardness, will you get a weapon that shows up in AIM and doesn't show up in your hands. 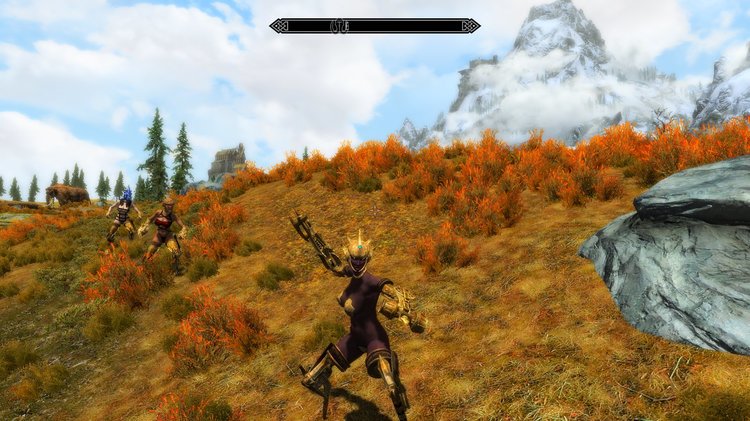 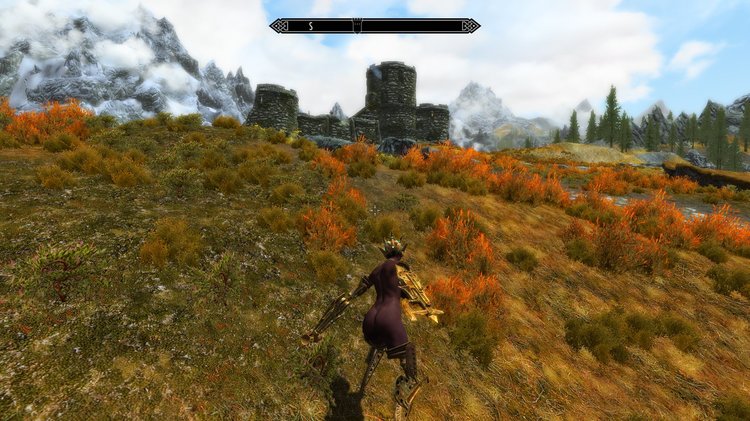 Need to do some further experimentation, of course. Mainly seeing what that first model path actually does, but also seeing if the zeroed-alpha model works without any odd visual effects popping up, or if subbing in an empty mesh would work without any AIM issues. But this is already a lot more functional than the previous attempt, just by virtue of being less of a PITA to obtain in-game. And they're something that I feel the replacement arms need to make them fully combat-ready, so I'm keen on making sure the concept works.

'Cause if you're gonna have weapons for hands, they might as well have some bite to them. 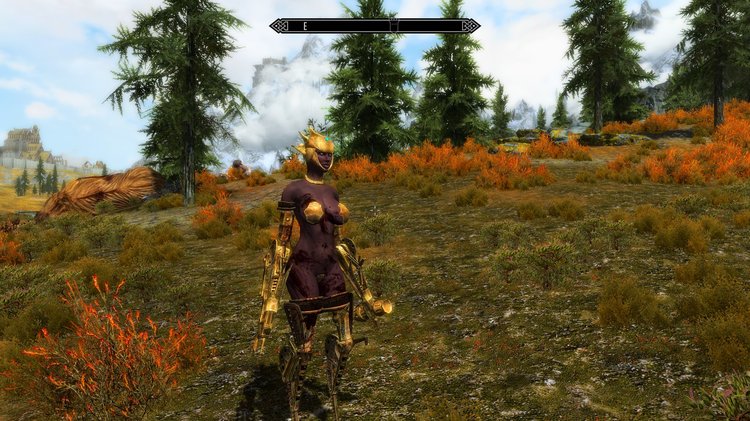 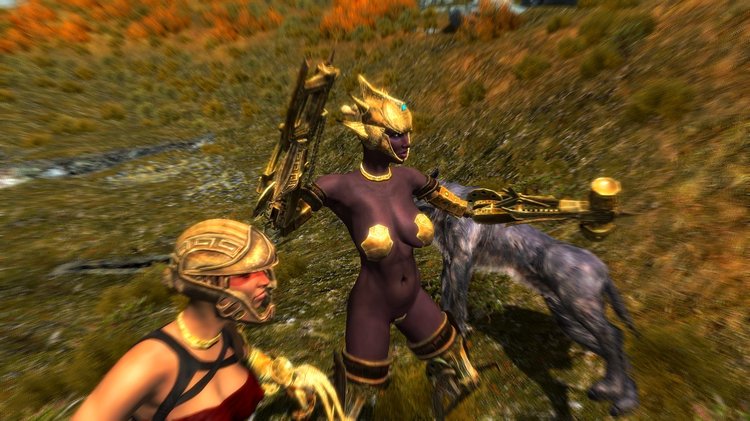 Edit: After that further testing, it appears that the only thing that first model path does is provide the Ground Object- specifically, the version of the weapon that you see when you drop it from your inventory. It does not provide the actual inventory object, however. Unlike the armors, where the ground and inventory objects are the same thing, the weapon inventory object is pulled from the 1st person model object.

I swear, there's a logical way, a tidy way, and a Bethesda way of doing these things.