After, the incident in that cave, Shea needed to leave. But as she investigated the corpses closer she realised something, they were of the Volkihar clan. "Well they still haven't changed their style, clearly. So dark and boring. Three hundred years and I thought I was stubborn in fashion sense." I muttered to herself before making my way over to a bed where I saw some clothes that I deemed...suitable. "Yet if the Volkihar clan were after me surely they had a reason, right? I mean they didn't like our family, but they'd still hold that grudge?" I thought to herself as I stared upon the drained and pale corpse. Funny that I'd killed him while eating, but it just proved my family's superiority over the Volkihar clan. They were savages, he was about to eat the heart of a dead thrall, but like most lesser vampires he was greedy and must've killed his thrall. I suppose these were better than turning up in a city wearing nothing. Even if they were bloodied and and worn out. At least they might keep me dry in the weather of...wherever I am. I have to say though, these lesser vampires were living rather tame lives for lesser beings. They were normally cannon fodder in our wars, but these were somewhere comfortable with access to a thrall and tombs. Not to mention the comfortable furniture. 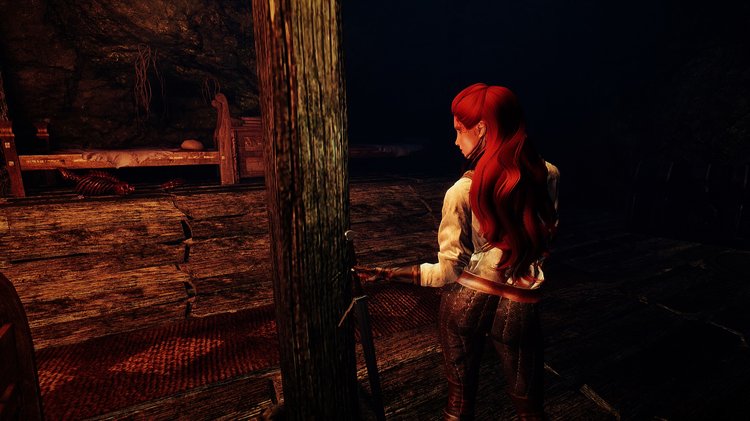 I think I might have to borrow this sword too, I don't want to be caught without a weapon, especially if the Volkihar clan are looking for me. But maybe these were just stragglers and the Dawnguard had truly wiped out our kind, if so they had done a very poor job of it. Now I certainly wouldn't miss this place, spending a few hundred years cooped up in a dark tomb was very boring, and I've missed many of life's wonders. Sex, food, blood and adrenaline rushes. I was glad to be subjected to that world once again, despite the first experience back here. By the divines, just one step outside and a cultist starts screaming about proving himself, I suppose it gives me some unwilling practice. Yet a few hundred years and I can still kill someone without magic or claws. I suppose this would have to be something I'd have to get used to again, I suppose vampires weren't as greatly feared as we were before. That's a shame really, I would've liked to have a power play in politics. I guess I should find a road first, then maybe from a sign I can figure out where I am. With the mountains it could be High Rock, the clouds make it seem like that too. But the terrain is like Skyrim, perhaps I should just reach a road. I mean the sun was setting too, sure I was a creature of the night, but travelling in the dark was difficult even for me. That was one of the unfortunate traits of my vampire clan. This looks like a good place to camp, but I can't help but feel something is missing. What have I experienced already? Adrenaline rushes, blood what else is there to experience. Sex and food. I don't see something I could eat for miles, so sex will have to do. Though I'm not sure how I'll do that. Maybe some summoning might aid me, if I can remember how. I think a spectral wolf would be nice to have inside me. I knew I was a fighter not a summoner! Well I suppose this will be my only interaction with something for a while. it's no spectral wolf, but if it can give me a good time I won't mind. Though I'm not sure how this will go. So he seems to like this, I'm not complaining either, though his teeth are uncomfortably sharp, i suppose I should make the best of it though. That certainly was one night to remember. Good job it was a partial summoning, otherwise there would certainly be some strange questions from travellers passing by. Speaking of travelling I really should get up and get to a city somewhere. Anywhere really. Maybe I'd need a summoned death hound more often.

P.S To anyone who has read this far, thank you. It truly means a lot to me, to know some people are putting up with my terrible writing and even worse screenshots. But as I said it means so much to me. Thank you again!

P.S.S Hopefully it'll upload fine and be in order too.

P.S.S.S Hopefully LL hasn't downgraded the quality of the screenshots too much