A few days later Leandra travelled to Falkreath, since Vorohah told her of some daedric activity in its vicinity. The vampire arrived during night time and entered the Dead Man’s Drink to rent a room. She changed her clothes to rest a bit during this evening. 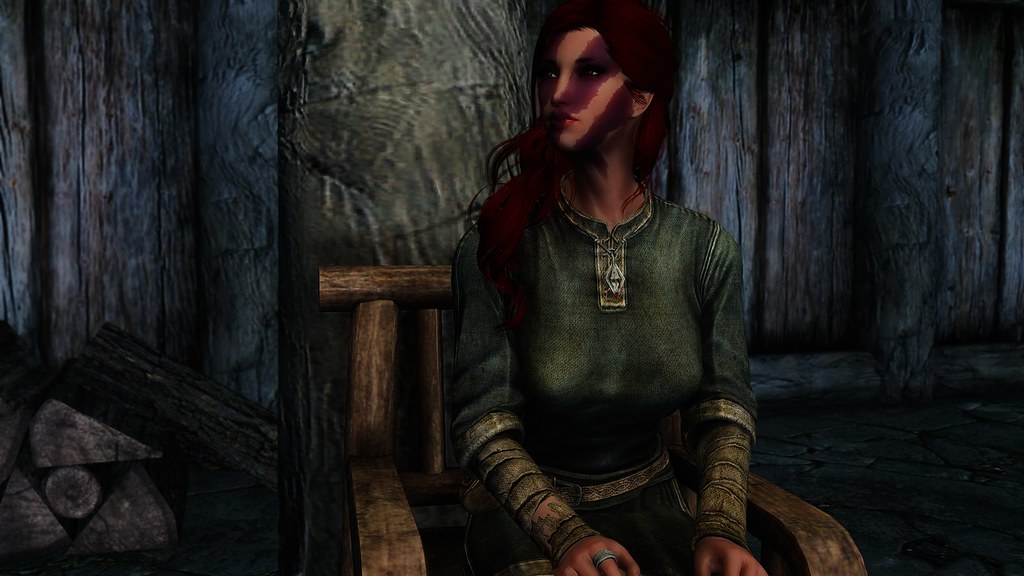 As she sat there the red-haired woman noticed an old Altmer watching her. Maybe I’m reminding him of someone. She thought and ordered a meal. 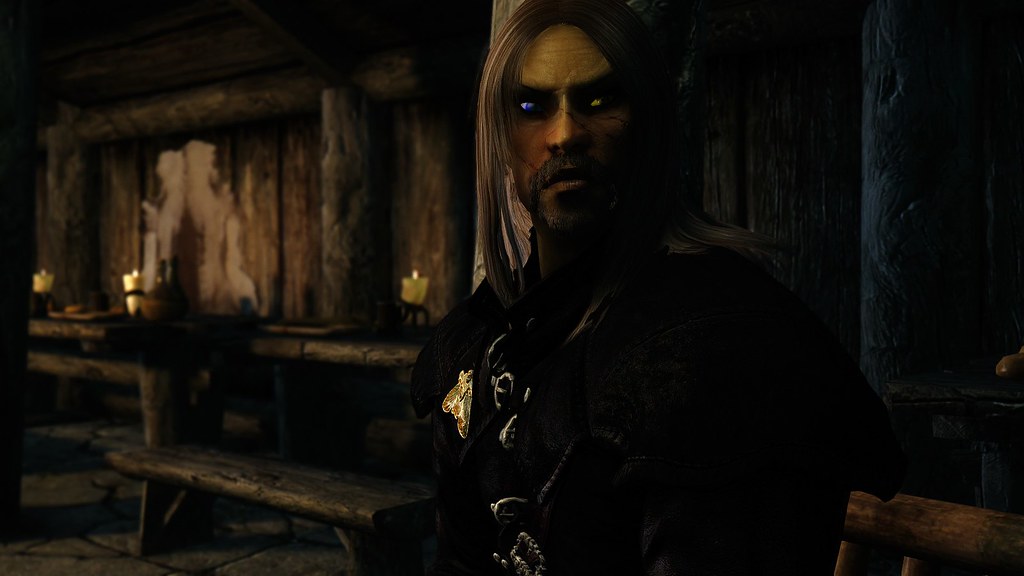 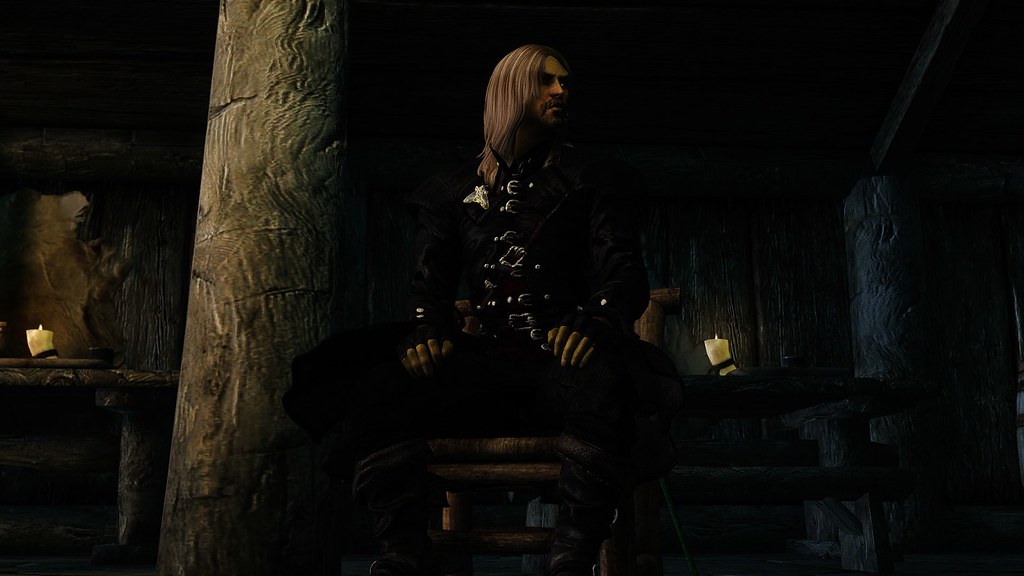 After she finished eating the High Elf sat down next to her.

“Are you the Dovahkiin?” He asked with his raspy voice. As he saw that she didn’t trust him he smiled a bit. “Don’t worry. I’m done with those wretched fools of the Thalmor. I was with the Aldmeri Dominion in the Great War and they left me for dead after they found out that I had an affair with a Breton.” He told her. 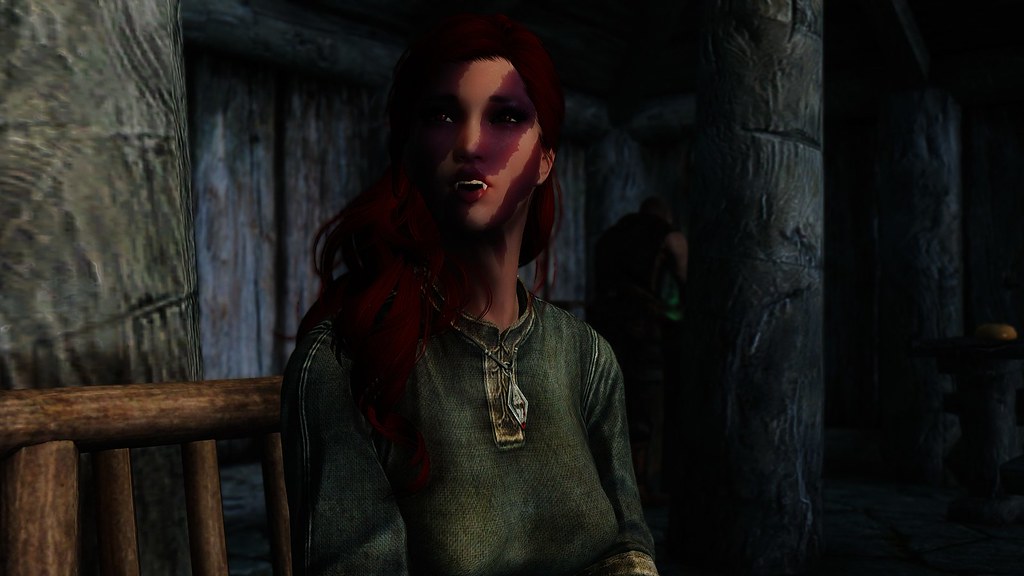 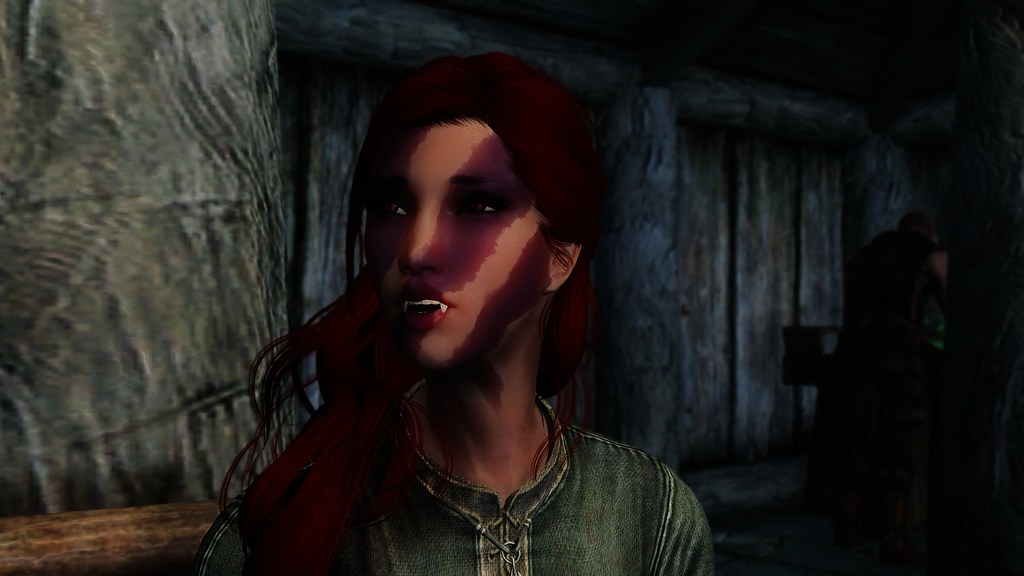 Leandra decided that she could say the truth to the man before her. “Yes I am. Why do you want to know this?” She asked him.

“Because the thing I’m going to tell you is only for your ears.” He answered. “First of all, my name is Aedthaer and I…” He made a pause to take a breath before he continued. “And I am your father.”

Leandra looked at him at first. She felt like she was punched in her stomach. “My father was a Nord and I saw him die.” The vampire said and turned away.

“Really? Didn’t you ever wonder why the cold did much more to you than to other half Bretons and Nords? You are gifted in the magic arts and you’ve been granted access to the College of Winterhold with just one small test. That’s not something you’d see with Nordblood.” Aedthaer explained to her. 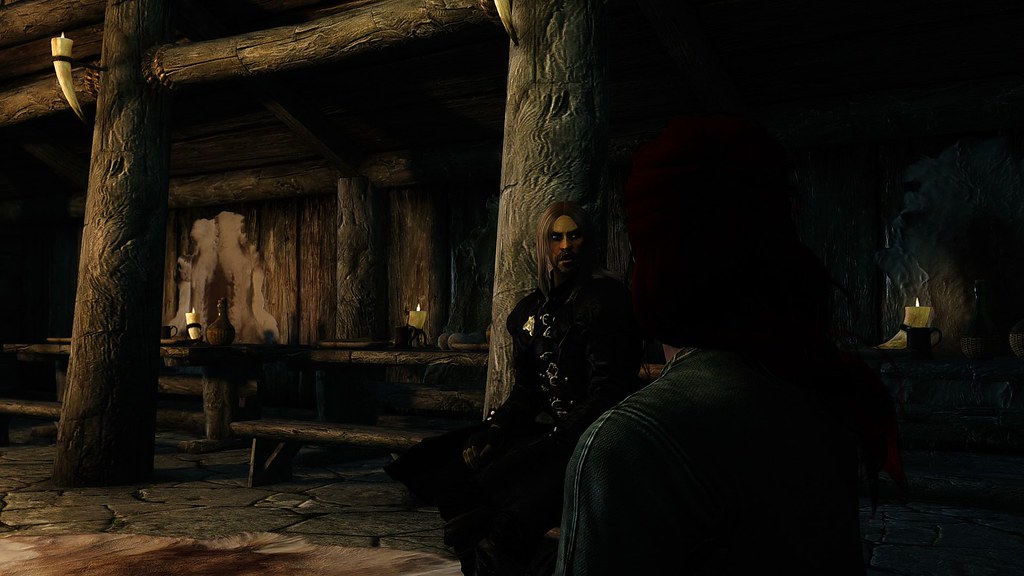 “If that’s true, can you prove it?” Leandra asked him beginning to get angry with the Altmer.

“I can.” He answered and pulled out an amulet Leandra knew belonged to her mother. “And if you wonder why you don’t have any traits from an Altmer, I can show that you have them.”

Leandra stood up and looked at him. “Then show me.” 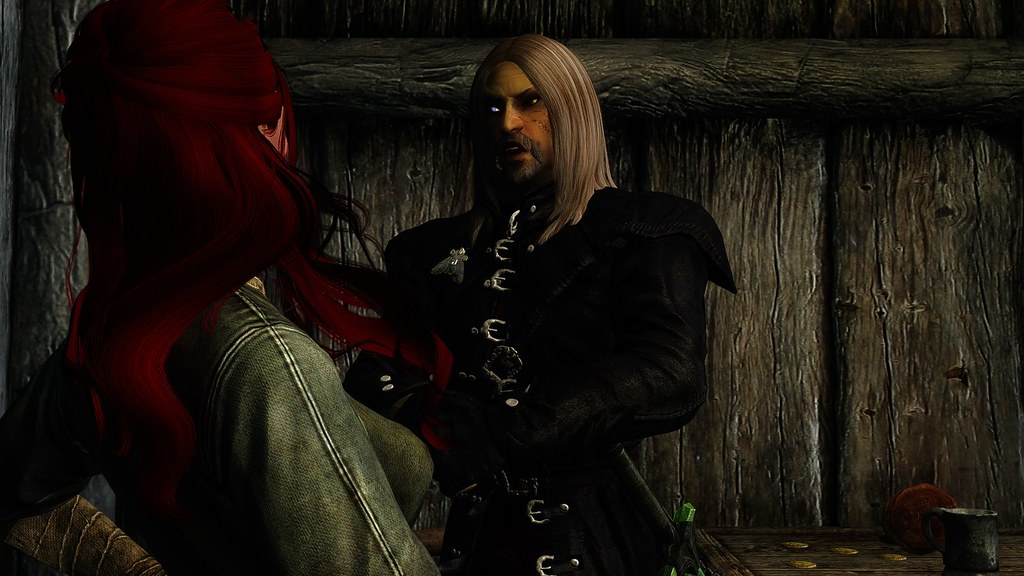 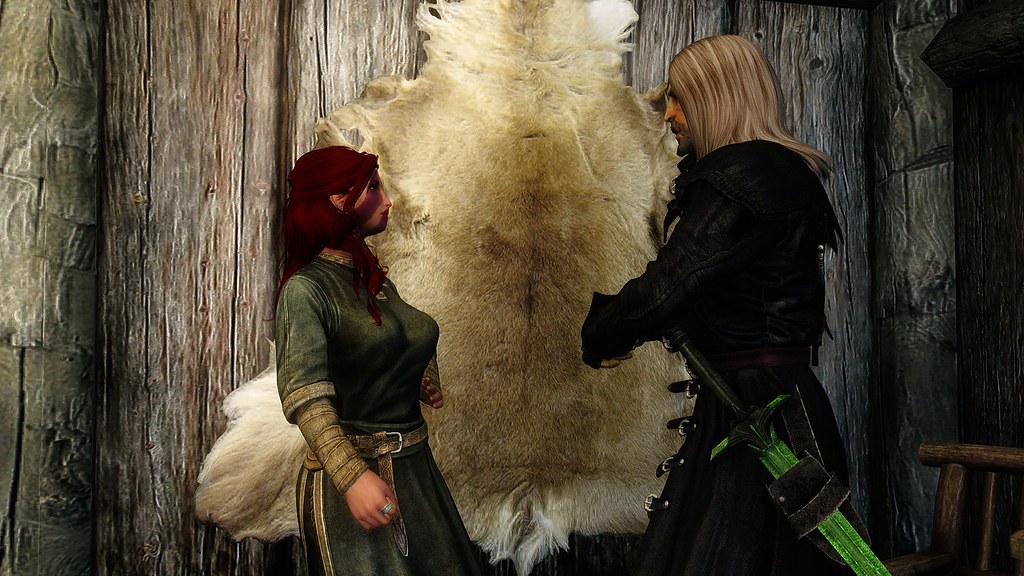 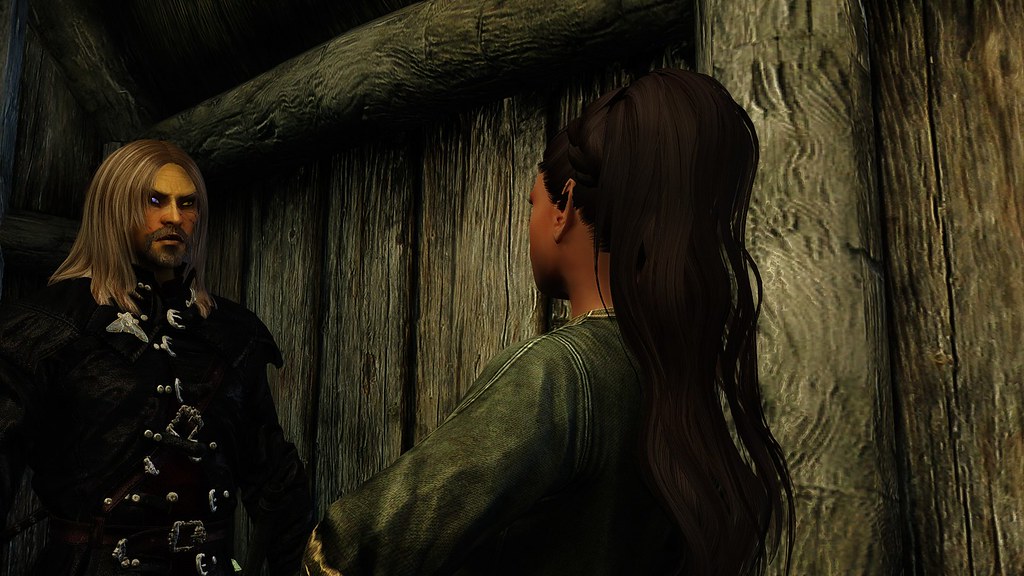 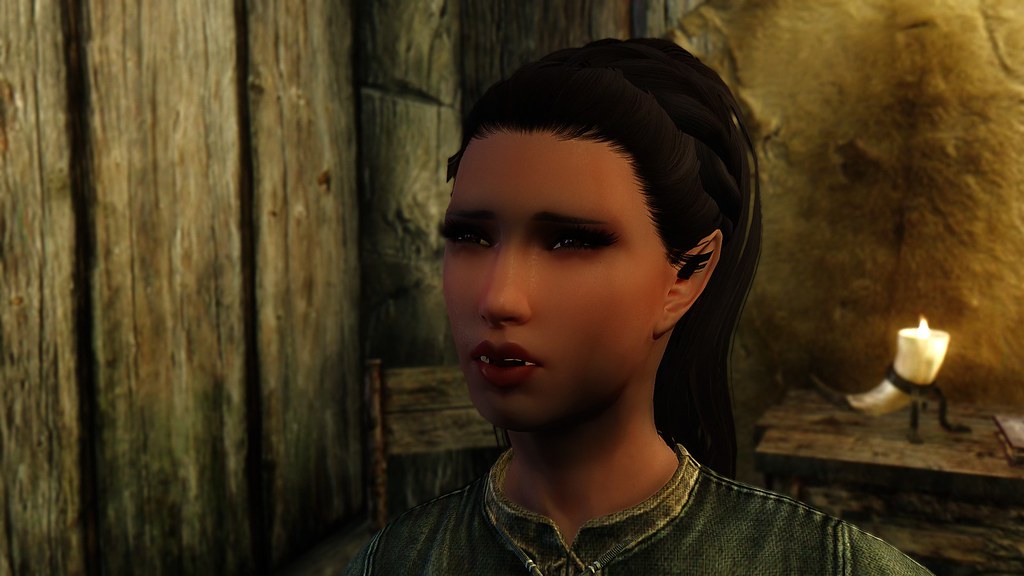 As they both stood in Leandra’s room, Aedthaer casted a spell on the vampire and she felt like something she didn’t even know she had carried left her.

“Your mother and I agreed to cast an illusion on you, so you’d like the child of another man.” He explained to her.

Leandra simply nodded, not able to say anything as she felt that her ears were a tiny bit longer than before.

Sorry again for the long pause. But in the last weeks I was really stressed and didn't really have time. I still hope you enjoyed this part.