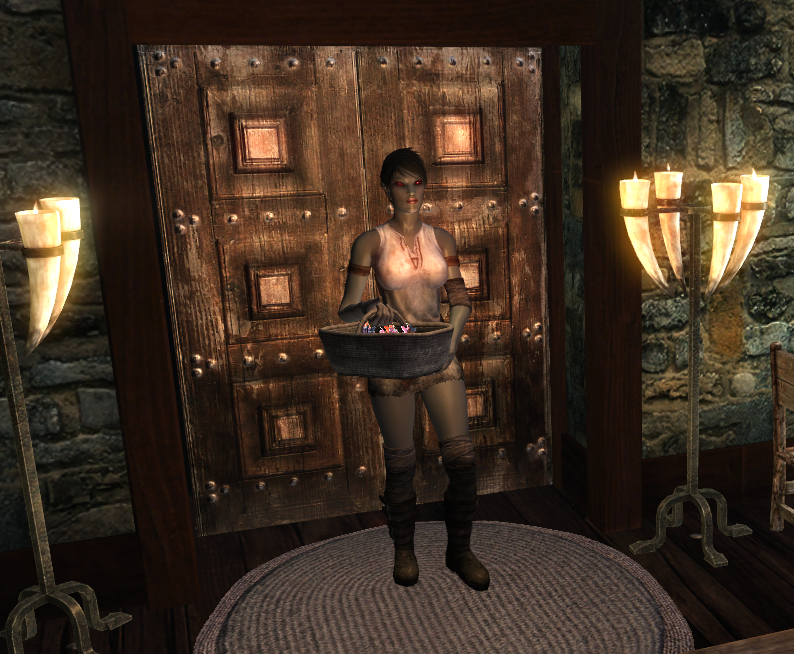 One day while looking for work, Thana got her break. She overheard one townswoman complaining to another that poor Nurelion was too sick to make his potions fast enough to keep up with his work. When the second said that he might have to hire a second assistant Thana headed for the White Phial. She said a prayer to Zenithar before entering the shop in thanks for the alchemy experience she already had and hope for more with a stable job here.

A short interview proved she could identify the local flora and got her a job of field harvester. Nurelion and his assistant Quintus also let her sleep downstairs. She almost felt at home sleeping in storerooms now. Her days were spent in the fields and prairies outside Windhelm, foraging for the plants, mushrooms and bark the men needed for their potions.

Quintus had a few ideas he wanted to research as well and after she returned for the day he would tell her what else he needed.

Some nights he wanted her essence, or cream, or secretions. He never seemed to use the same word.

Other nights his emissions were needed. She started to think he just wanted sex.

When he claimed he wanted to test the effects of saliva on the potions, she said they could just fuck.

Instead he got a larger vial for her to use, claiming his mouth fouled the experiment.

Eventually she gave up and stopped asking, riding the vials for her own pleasure, not caring if he watched.

He did play "pay for your supper" with her some nights, feeding her creme before the soup.

Some nights she danced for the men if the weather was bad or business was slow.

Other nights, if Quintus did not need too many "samples collected" they would share his bed before falling asleep. Whether due to his constant "sampling" or natural abilities, Quintus was one of the best lovers she had and usually rode her to completion twice before he finished. Some nights he was able to finish two or three times and often driving her to six.

One day Thana traveled a little farther than usual along the road to Kynesgrove. She did not go this way often because a bear was sometimes sighted along the river. She had never seen the bear but knew there were some thick patches of herbs the shop would soon need. She met soldiers on the way and when told who she was and what she was doing told her they had killed the bear two days ago and she should be safe to harvest the herbs. While not happy to see her, she surmised they knew her employer was one that made healing potions and other elixirs for the army. Herbs she picked today might keep them alive next month and they let her proceed with less taunting and harassment than usual.

Basket full and sun still high enough, Thana walked toward the rundown shack she could see on the river edge of the field. When she reached the dilapidated ruin of boards she realized that this was probably where the bear spent a lot of its time. She looked through the trash and destroyed belongings of whomever the bear displaced and found a still solid trunk. She managed to pick the lock with a rusty knife and fork and found the contents still whole and mostly untouched by the weather. A couple sets of clothing she thought would fit her and other odds and ends she could sell she took. At the bottom of the chest she found a small leather bag. Opening it, she found coins. Enough coins, she thought, for extra food and passage on the carriage to Riften. She could finally get out of this frozen north and, with luck, find some of the blessed skooma her body craved.

After a change of clothes, she headed back to the city.

Entering the shop, she gave her harvest, and good news, to Quintus.

She gave a few of the coins to Nurelion with her best wishes and thanked him for the chance to live and work in his shop.

Quintus she repaid another way.

So, we're going to meet Serana, the supposed hero of this story, in two more chapters. I had some of this in mind when I first wrote the poll about a weak or slave type sidekick. The "getting stronger" part will also happen but after things are going in earnest.