Ephedrina washes in the cistern by the Ragged Flagon. 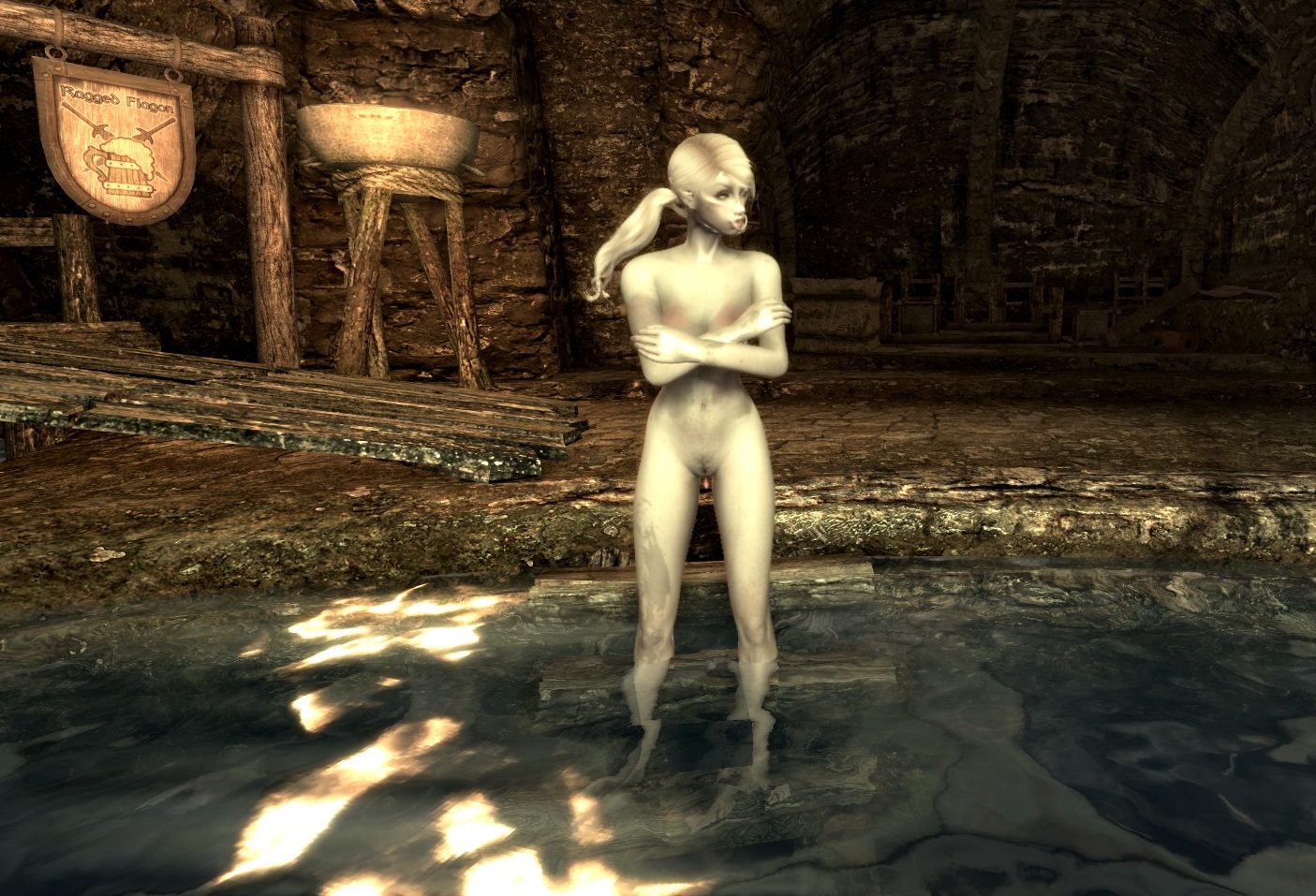 The Thieves Guild (well Brynjolf) has assigned Ephedrina her first mission. There are three individuals who owe the guild money and Ephedrina is to collect it.

Normally, it'd be about intimidation but since she's the new designated fuck-moll (Ephedrina winces a bit every time she hears the term), she must fuck them to persuade them. It's a sort of a test. She's not sure how (or if) they will be able to confirm she followed the instructions, but it's probably best to play along.

"Hah! I can see your snatch, and you're trying to intimidate me?"

"No," she says with her sweetest seductive smile, "I'm here to ask you nicely. The nasty stuff comes later... if we can't work something out."

He grins at her lewdly. "How about you let me fuck you, and then I pay? How about that, huh?"

She feigns shy surprise before accepting. Soon enough they're rutting on his shop floor. 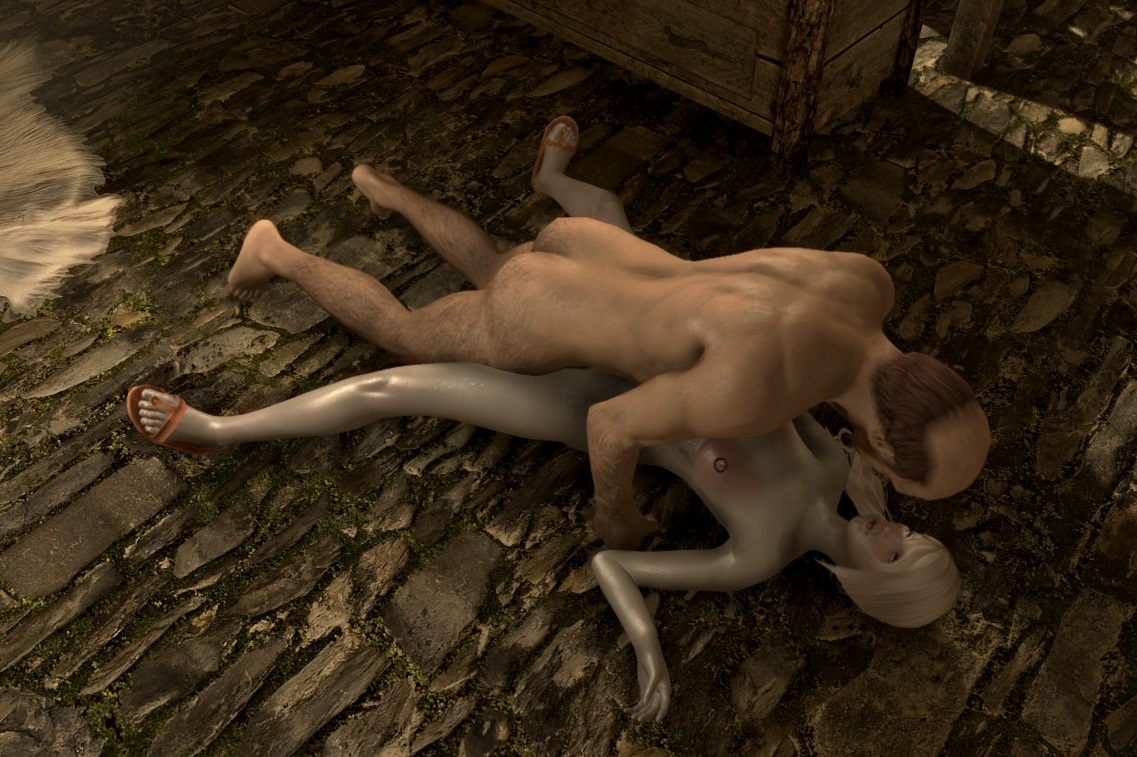 A few more images of Bersi and Ephedrina on the floor.

"You know you're basically selling yourself like a whore," grunts Bersi, "except you don't even keep the money."

Yes, Ephedrina does know that. 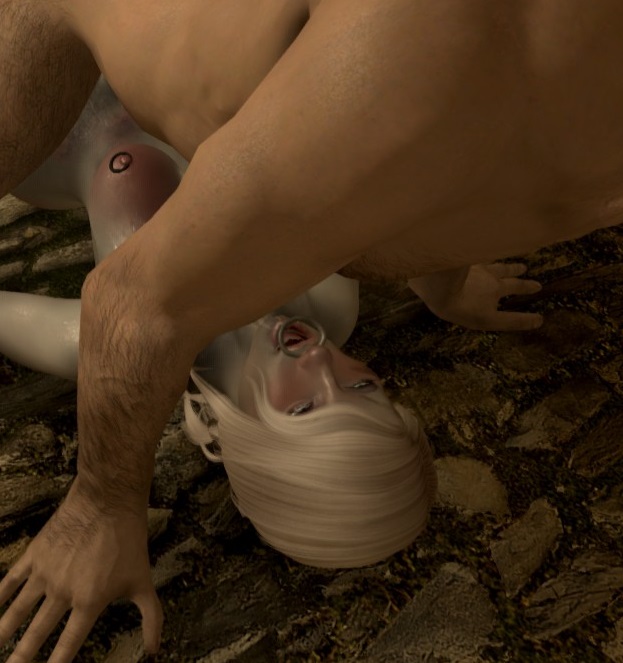 Sweaty and naked on a dirty floor, fucking some balding old man for someone else's money. It's not exactly what Ephedrina pictured when she first set foot in Skyrim. Still, she climaxes. Twice. 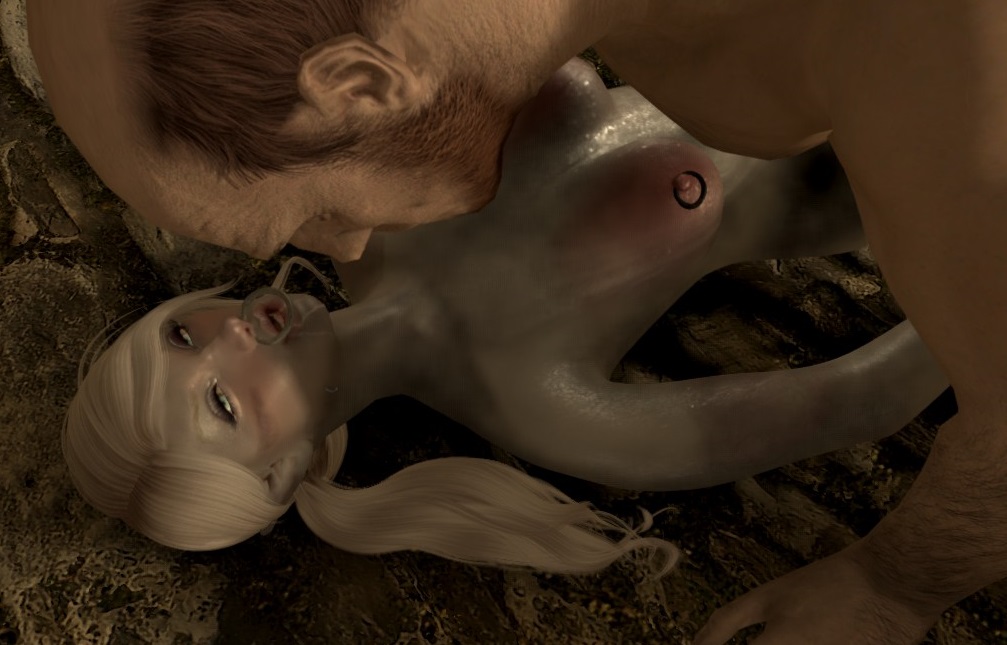 The next... target? Client? Fuck? Keerave, the Argonian landlady at the Bee and Barb.

Ephedrina is intimidated by the scales and the teeth and the tail, but to her relief Argonian fundamentals turn out to be similar to Elves and Humans. 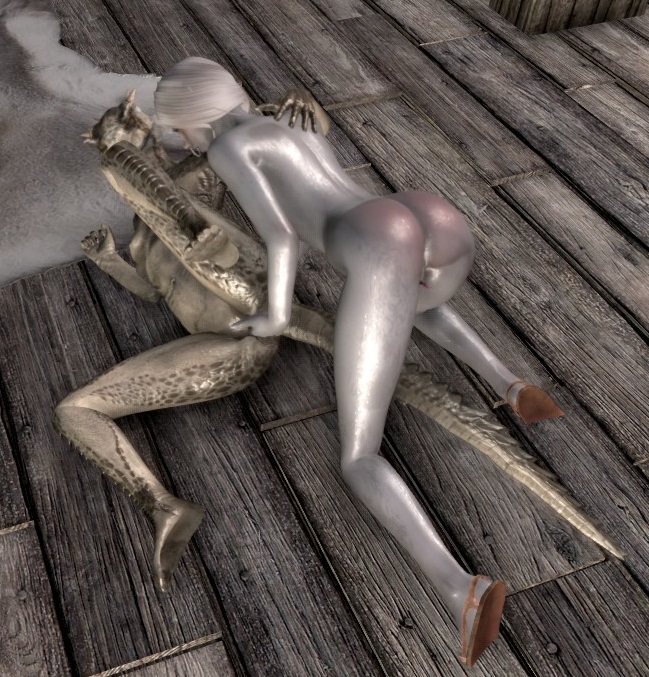 Additional images of Ephedrina on Argonian action, for those who are into that sort of thing:

Deep kissing someone with that wide a mouth and sharp teeth is very very different. Ephedrina isn't particularly comfortable with it, but does her best to seem enthusiastic. 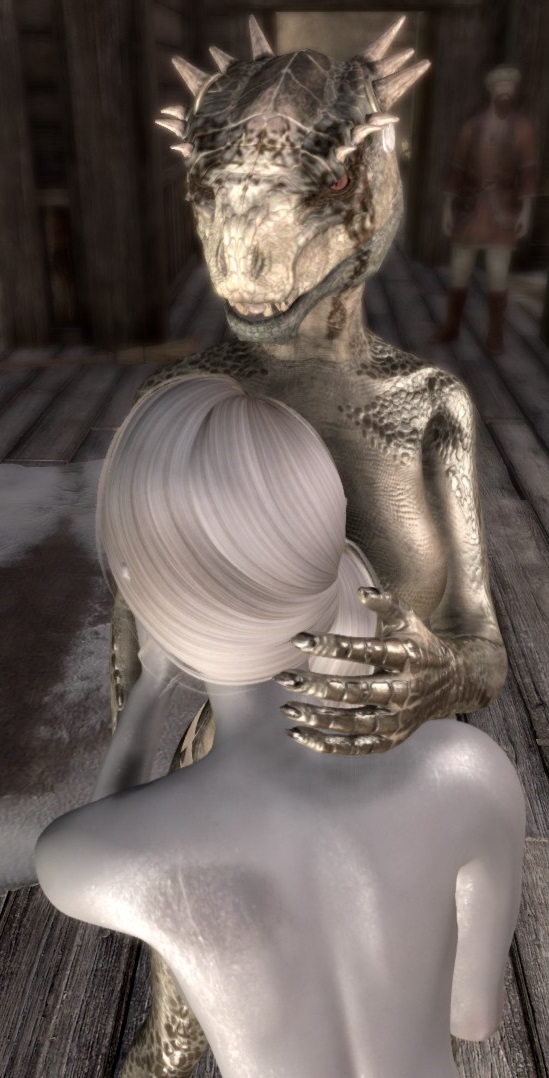 One thing that stands out is how different the scents are... the skin... the sexual fluids. Is that just Keerava, or is it all Argonians? Whatever the cause, the scent is quite distinct and lingers on Ephedrina afterwards. 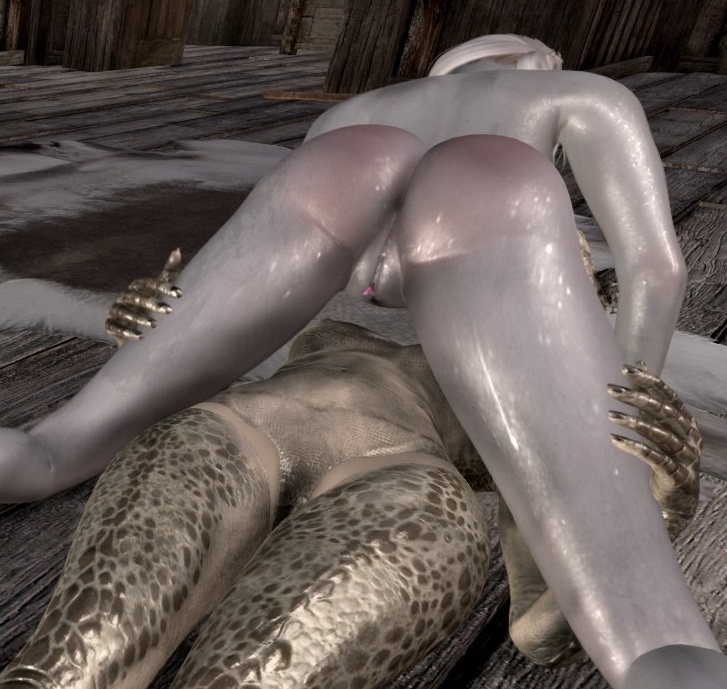 The last... Ephedrina decides to go with "mark"... the last mark is a follower of Dibella. Ephedrina ends up enjoying herself (and her partner) quite a lot. 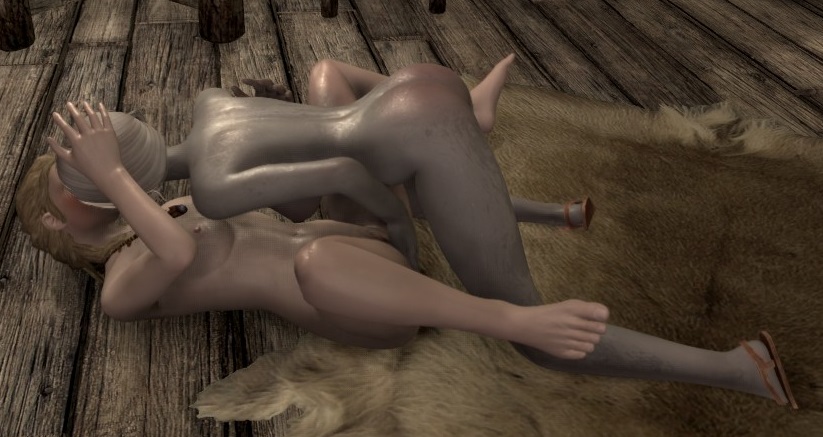 Both of them know what they're doing and know what they want. If only all her marks would be like this, Ephedrina wouldn't mind the fuck-moll gig that much (though she'd still prefer a different less crude term).

Ephedrina hands over the money she collected, and Brynjolf formally admits her to the Thieves Guild. Membership comes with a distinct set of armour as well. It's not bad, though Ephedrina still misses her noble Dunmer outfit she used to wear before... well before she was defeated. 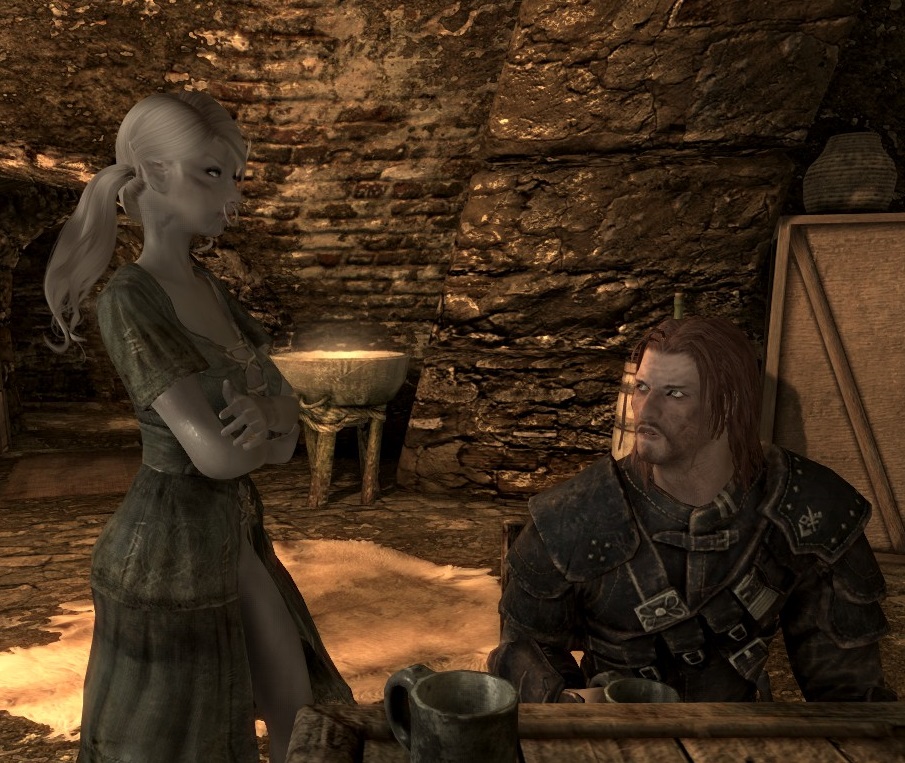 "Yes, Ephy. You have to own up to your behaviour on your own."

"You have, and you need a lesson. Take off your clothes."

"What? Here? In front of everyone?"

"Yes of course. What's it matter to you? You're a fuck-moll. No point in being delicate."

She sighs. Reluctantly she undresses. He seems to enjoy the fact she's taking her time.

"You're very pretty. Did I ever tell you that?"

Then he spanks her. It hurts physically, but the deliberate humiliation is probably worse.

Some people look on with interest. Others seemingly ignore the sound of spanking and her occasional yelp echoing through the Ragged Flagon. They all know what's happening, though. 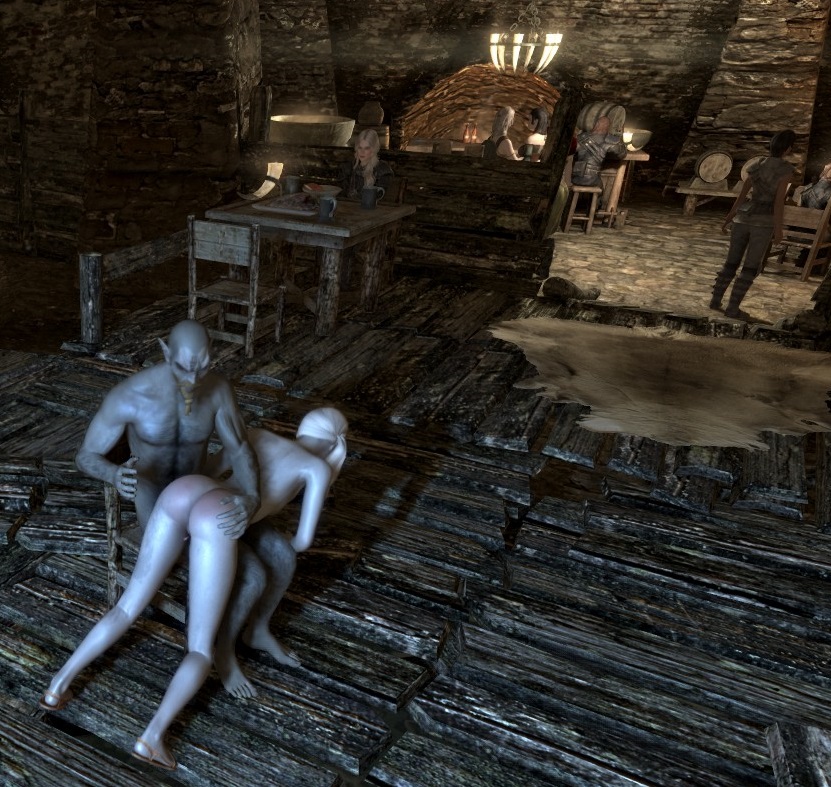 "Given your role, I've made a few minor adjustments to your armour, dear. I'm sure you'll like it."

"Really Gascayn? Do you have to do this?" So far Ephedrina has more or less been able to maintain her mental equilibrium, even while on her back. Somehow this - Gascayn messing with something she earned - pushes her to the verge of tears. Still, she holds it back.

"Yes I do," he says with a smile. "You made a deal. Besides it looks really darling on you. It really helps you display your best qualities."

"Fuck you," she mutters.

"Yes yes, you made that deal too, sweetheart." 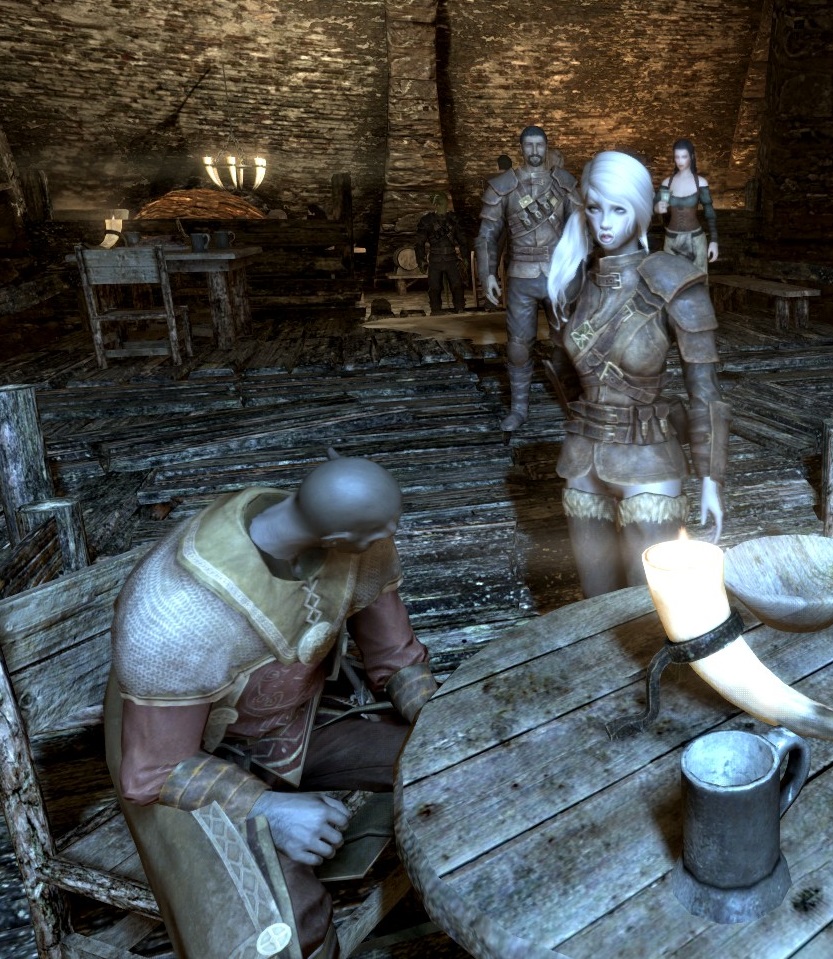 "You're settling into your role, I see." 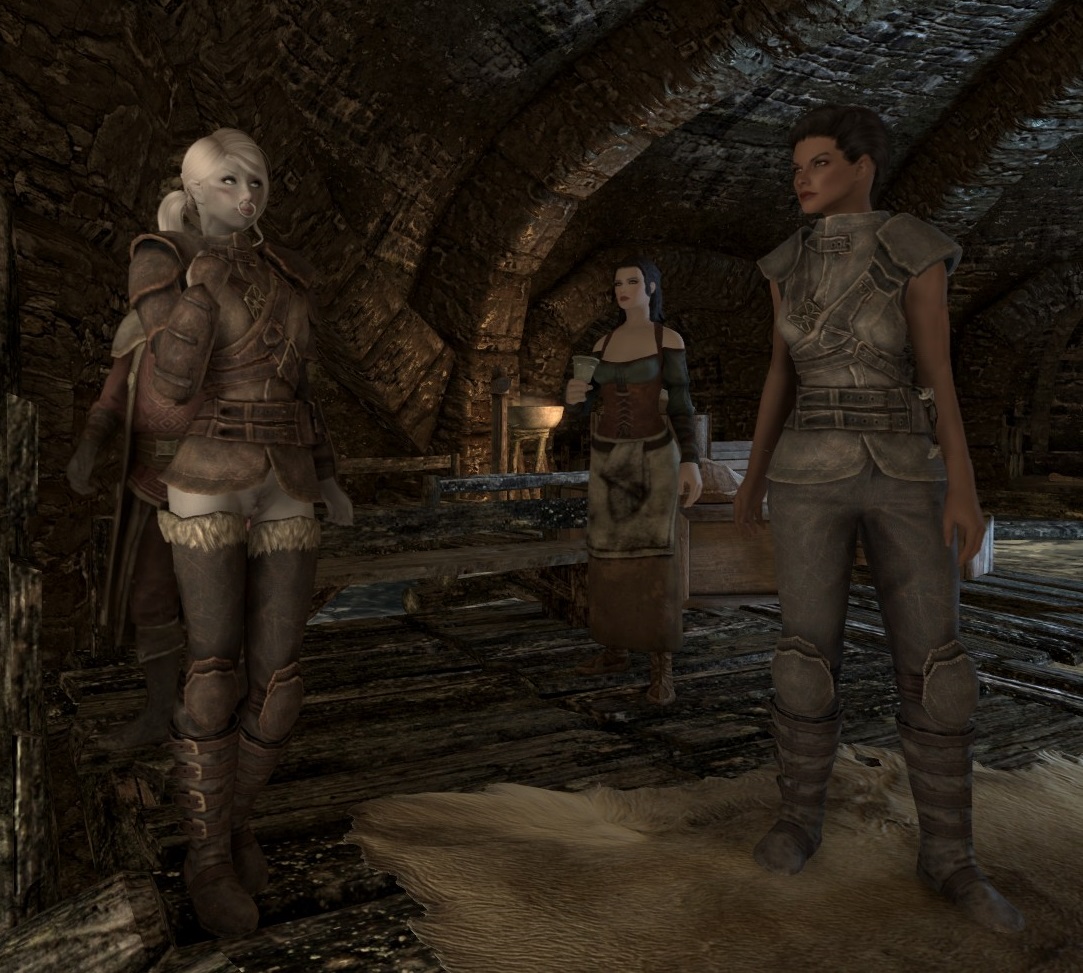 "Another nice thing about the armour is how it lets you show off your jewellery." 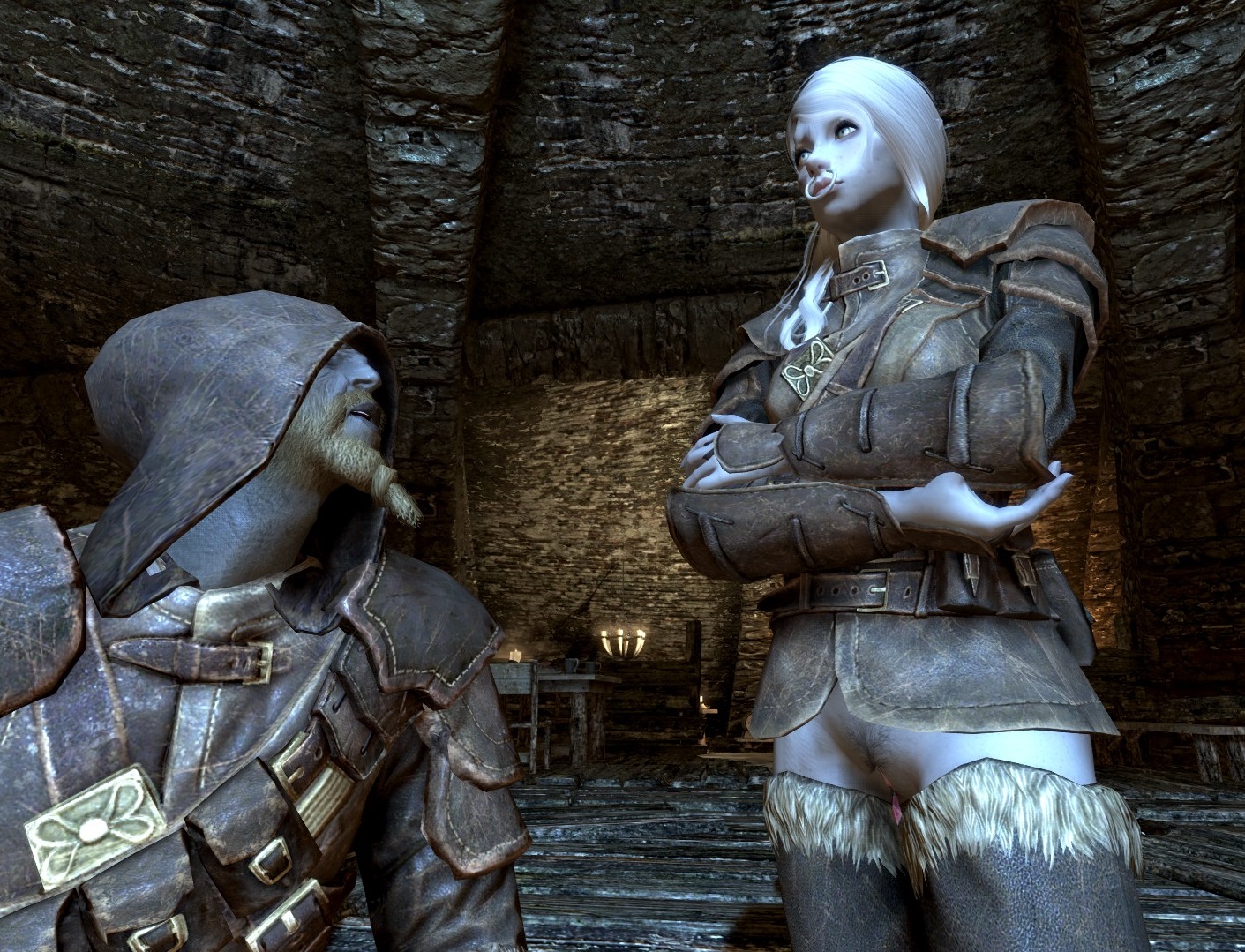 It's late into evening, and Ephedrina goes to rest. There's a small chamber off a rarely used section of the underground passages that Ephedrina has claimed for her own. It's muggy and dirty and kind of stinky, but it's the best she can do.

As she gets ready to sleep Ephedrina realizes she's so aroused she's literally dripping onto the floor. Why is that? She thinks of all the things that happened to her today... the sex, Gascayn's treatment of her, the pitying and knowing looks the other thieves send her way... and it just makes increases the throbbing ache in her genitals.

She's tries to ignore it, but she's having a hard time falling asleep. Her hands drift down to her (always) exposed crotch. Just a single touch. It feels good. And she's so so wet. 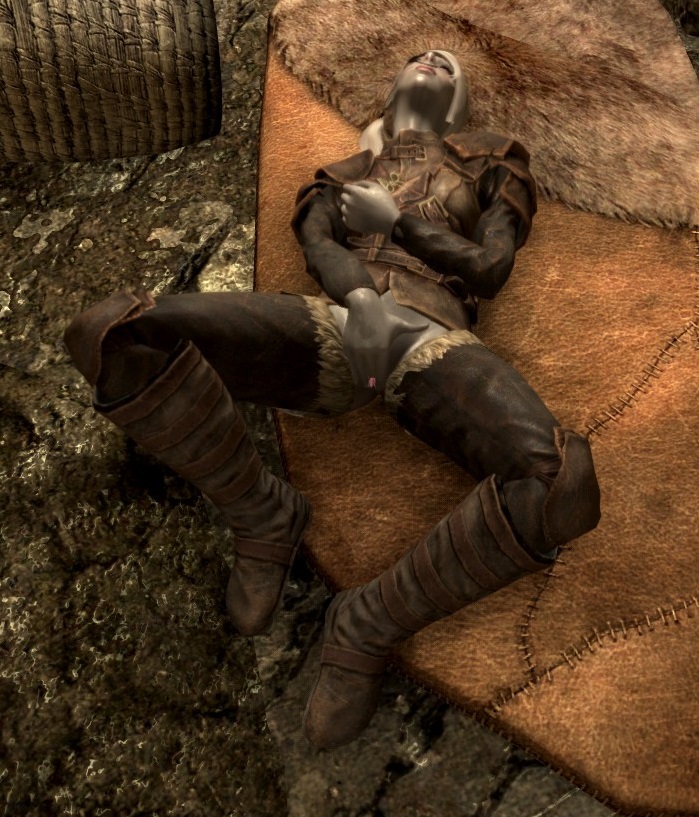 More images of Ephedrina in this private and intimate moment:

Suddenly Ephedrina is struck by worry. She's supposed to offer sex to Gascayn every day. Did she forget?

It feels good to think about it. 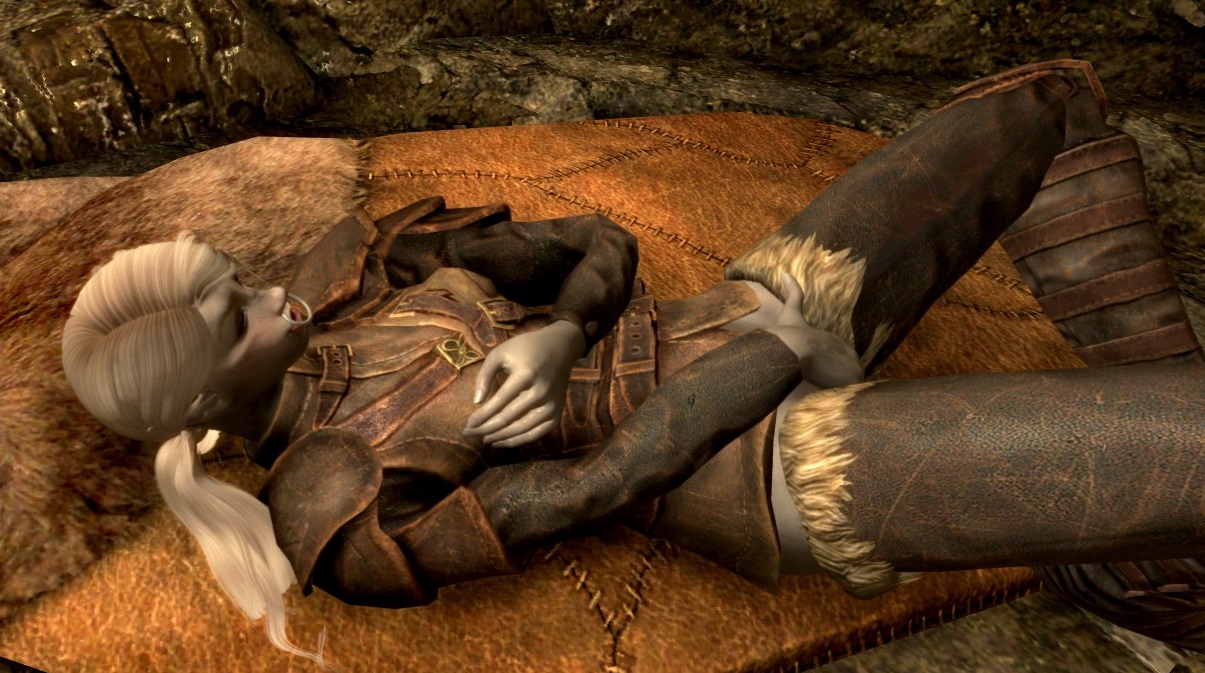 She is filthy. The mixed scents of the people Ehedrina fucked today still cling to her.

Ephedrina climaxes as images of fucking, images of stripping naked while everyone watches, and images of Gascayn spanking her flash through her mind. 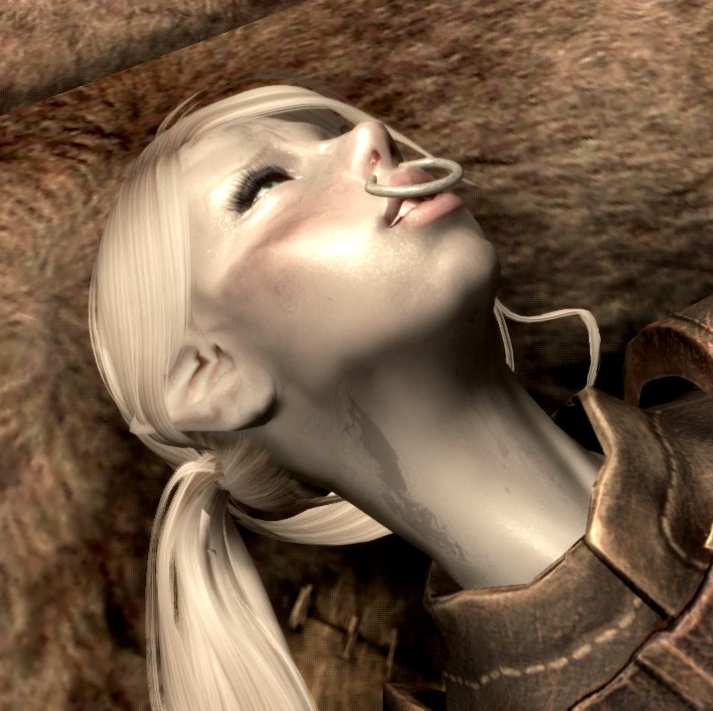 Ephedrina recalls being slapped and spanked. She likes being slapped. Oh no. She tries to deny it, but whenever she thinks about hands striking her tits and ass she gets closer and closer... 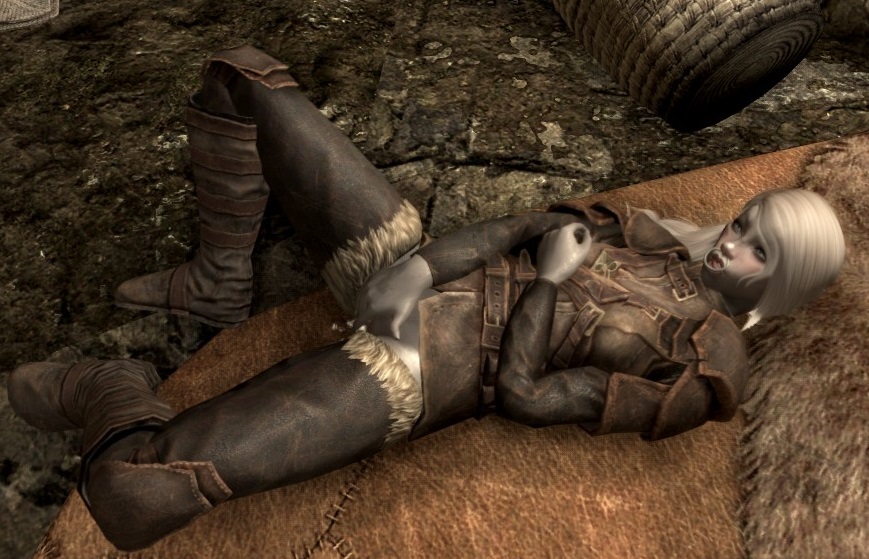 ... and there's another climax. 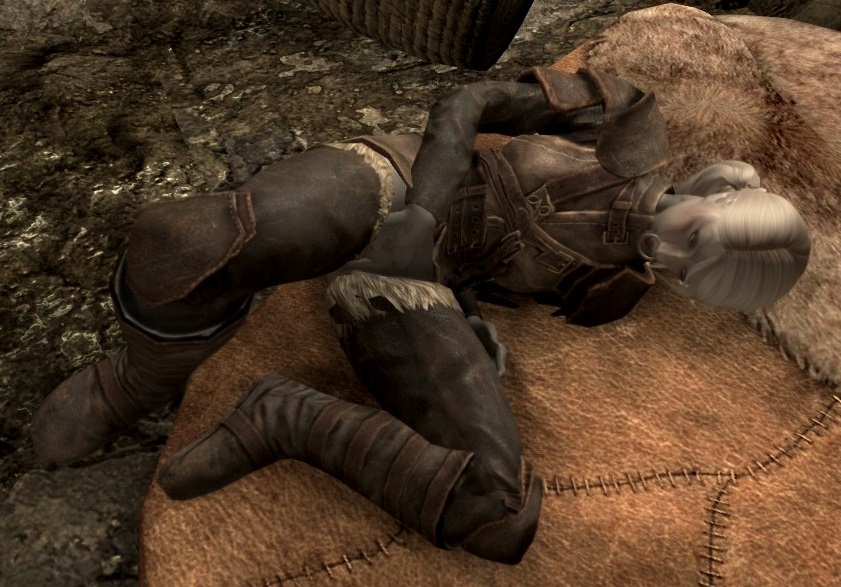 Ephedrina uses the ring and gem attached to to finally provoke her third climax. 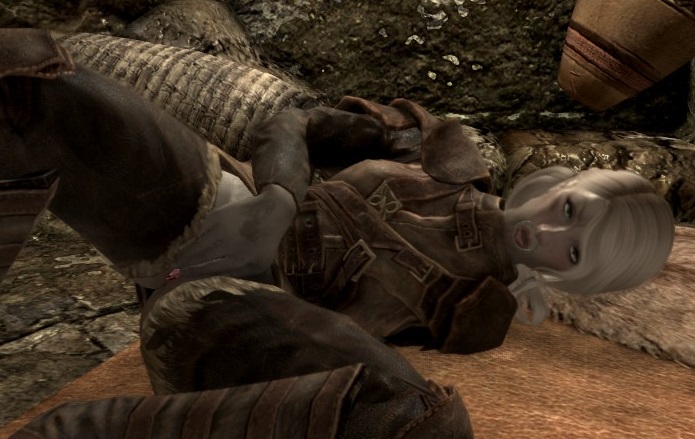 Exhausted, Ephedrina strips off her armour and falls asleep. 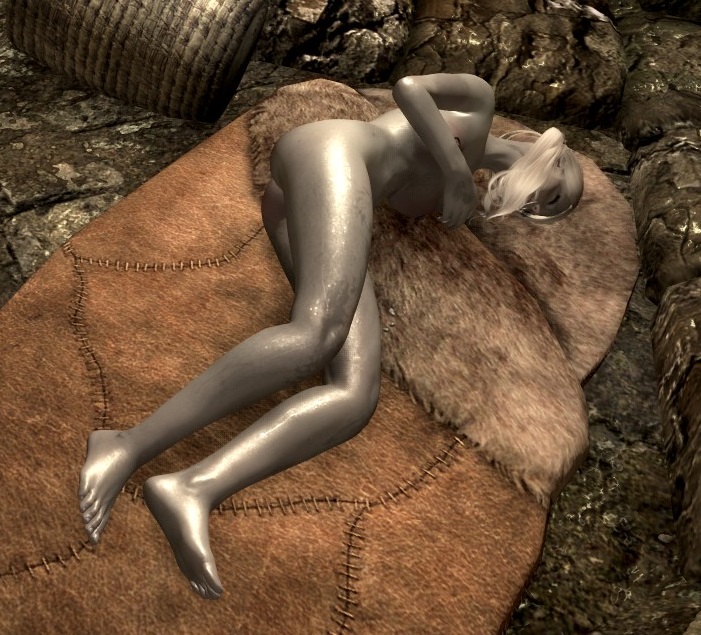 Rest now. Who knows what tomorrow will bring?