Their next target is a group of bandits with a bounty on their heads. The sentries are dispatched with brutal efficiency. The bandits are holed up in a waterlogged cave. Ephedrina and Gascayn approach cautiously, but with confidence. The bandits fight back as best they can. Their leader is tougher and more cunning than the others, but it's not enough. He too is ruthlessly slaughtered by the two Dunmer. They kiss again, bodies tight against each other. She touches him. He touches her. First through their clothing, but soon hands find their way underneath. Then they're naked.

She feels his mouth and beard against her sensitive breasts. His erection presses against her body. She touches him everywhere squeezing and caressing... everywhere, except his penis.

He lifts her up, she wraps her legs around him . "This is it, it's really happening" she thinks, gasping. Gascayn's fingertips caress her inner thighs and her labia. He pulls her lips apart, then push them together, massaging her. Ephedrina can tell how wet she is by how slippery his fingers are as they move across her skin.

He gives her a devious grin.

Alarmed she whispers "but please be gentle with me... it's my first time."

She gasps as he presses a thumb against her sphincter. It's still tender from that time in the tunnel, but still she relaxes it. The thumb slides in, lubricated by her own juices. She can't tell how far it goes, but it feels... it feels good.

"What are you doing?" That's what she wants to say, but instead she moans as another finger grazes the area by her clitoris.

Gascayn puts her down, turns her around, leans her forward. "Stand your ground."

He pushes finger back into her asshole. No wait... it's something bigger. Is that his cock?

"Unhh... aaahhh..." she gasps as he penetrates her. Slowly, quarter-inch by quarter-inch.

Once his cock is completely inside her ass Gascayn pauses. He kisses then gently bites the sensitive area on her neck. She squals. Slowly, taking his time, Gascayn caresses every part of her body with his fingertips. Ephedrina squirms and moans as her anticipation grows. 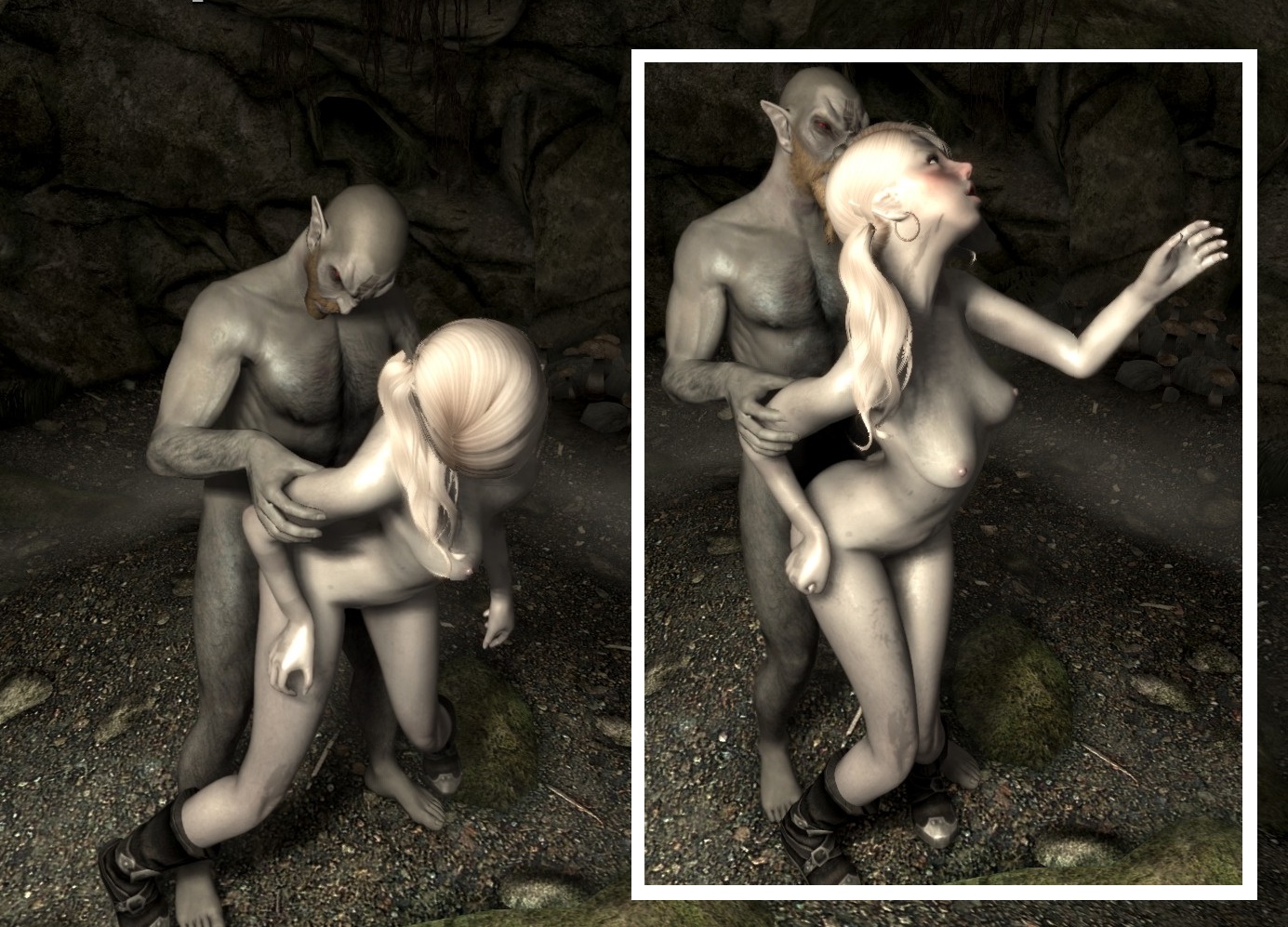 ... with what seems a practiced motion, Gascayn bends his knees, pivots, and scoops her up - his cock still deep in her ass.

For a moment she squirms, trying to reciprocate his movements with her hips, but she has no leverage or anything to push from. "Relax," he repeats. She does her best, flopping around limply as he lifts and lowers her in time with his thrusts.

Ephedrina's pussy is dripping, ready to go, but Gascayn isn't touching it. From the pace of the thrusts and his grunts, he's focusing on his own needs. The way he holds her like she's weightless makes her feel small... like an accessory, almost. It does feel good, though, the way she's clearly satisfying him, the way she folded up with her head between her knees, the cock in her ass... she can't really concentrate on anything other than letting him fuck her.

He thrusts hard, moans, and quivers.

Then he puts her down.

Ephedrina's legs are shaking as she finds her footing. She's sore but satisfied... well sort of satisfied. Not really. She can feel the hot semen leaking out of her ass.

She cleans herself up. Gascayn is already dressed and is watching her, smiling a weird half smile as he does. Afterwards Ephedrina wants to ask him why she fucked her in the ass and not... not the regular way. She'd hoped... well, she thought she was going to lose her virginity. It feels weird to think of herself as a virgin after what just happened. But on the other hand, she's still never... you know.

She doesn't ask, though. It's too embarrassing to bring up. Instead they just dress and continue as if nothing's happened.

Her ass is sore. It's not unpleasant but... but he fucked her the way he wanted, not how she wanted. Maybe he did it like that so she wouldn't get pregnant? Maybe he was being considerate? She hadn't told him she took a contraceptive... she couldn't really, as that would have implied she expected him to fuck her. And that wouldn't do, would it? But still, it's a bit disappointing. Turns out they missed a branch leading to additional tunnels, and more bandits are lurking further in. Lucky thing those bandits didn't find them when they were fucking earlier. That could've gotten ugly, especially since this group is tougher. They even have a mage with them.

But it's not enough. The bandits are slaughtered without mercy. The bandits have a captive. A naked woman, tied up, with a sack over her head.

"Probably bound for the slave market in Riften," suggests Gascayne.

He nods. "Turns a tidy profit. Especially if they're considered pretty.... This one has a nice body, I should say...." He lets his words hang there, waiting for Ephedrina to respond.

Ephedrina has no real compunctions about deception or theft, nor murder really. It's a cruel world, and you can't be too delicate if you want to survive, let alone prosper. Still, the slave trade is a step too far for her.

They remove the sack and free the woman. Outside, in the bright sunlight, Ephedrina reflects on the day.

She's made good money. She's rescued someone - making her more of a heroic do-gooder than she ever anticipated. And so far, Skyrim has shown itself to be perfectly manageable, as long as she's careful.

It's a beautiful day. 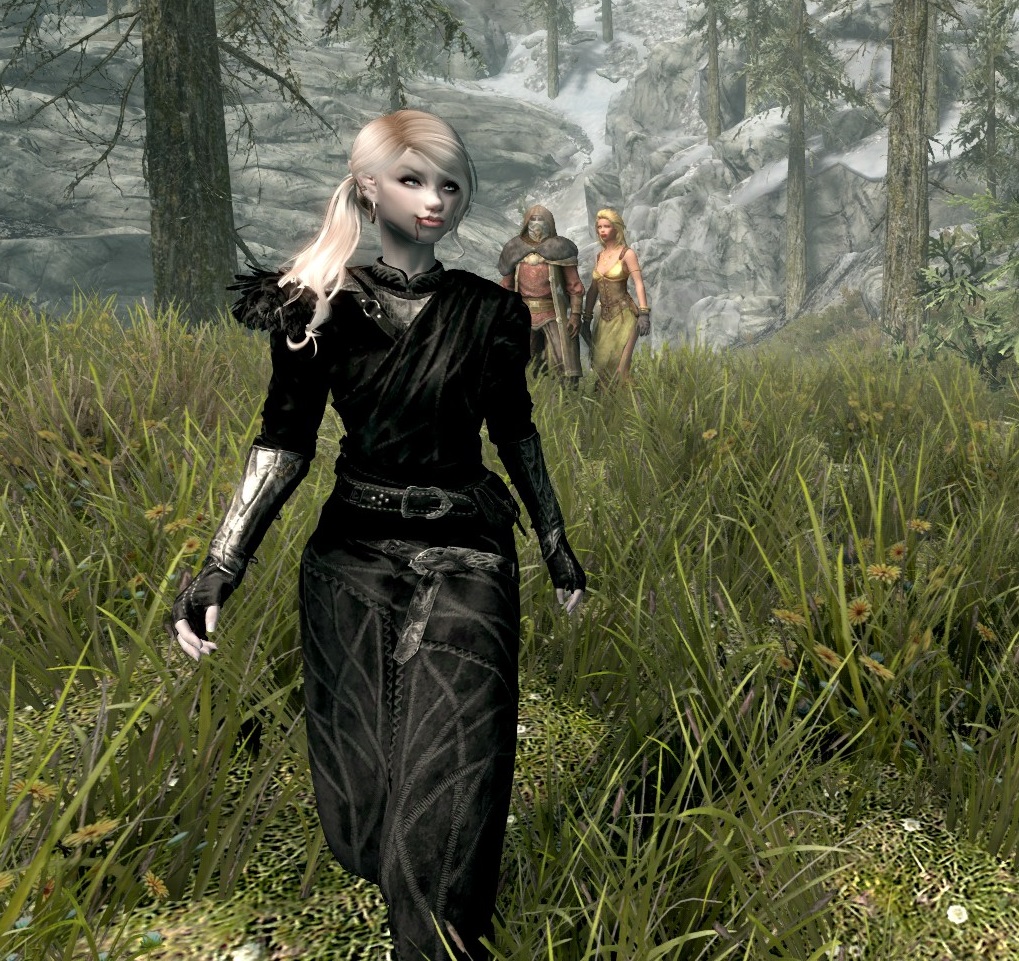 They return to the inn in Kynesgrove.

She'll have to figure out what to do about that man. She can't decide how she feels about him.