They return to Windhelm. 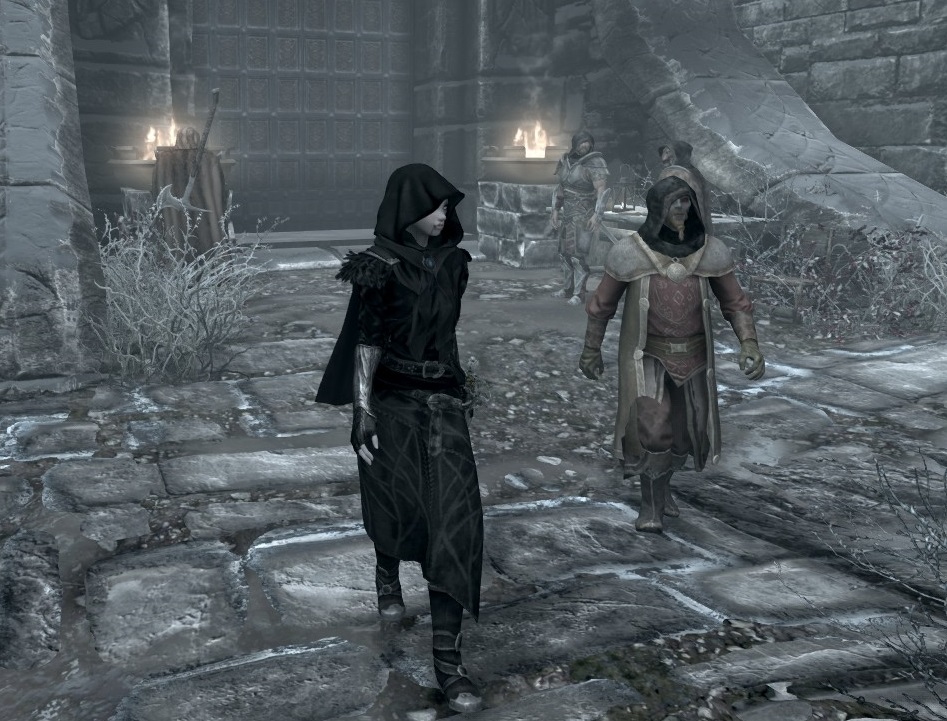 Again, Ephedrina is subjected to a tedious search. She keeps her clothes on this time, but she's still fuming. Having her magic license, Ephedrina purchases a few spell tomes

It's a bit forward looking, though, as she still has to master the previous purchases.

Including one that's way beyond her understanding to even begin studying. But, you know, plan for the future right?

"Why don't you sit here with me for a while, sweetheart? I'll show you a few tricks you might like...."

The court wizard is - it turns out - a perv.

"Ah... it's a pity. Normally I'm not into greyskin girls, but you're not bad looking for a Dunmer. I'd be happy to be into you." He winks and leers.

Thank you asshole. Go fuck yourself. That's how she feels, but instead she says "I really should go study now." Ephedrina has thought long and hard about this.

"Thank you for everything you've done. I won't be requiring your services henceforth."

"Milady? You can't be...." Gascayn checks himself, before continuing more calmly. "I understand. Is it... was it something I did?"

That's a lie, of course. It took Ephedrina a while to come around to it, and it's still more of a feeling than a fact... but the way Gascayn fucked her... and the way he acted afterwards. It made her think he'd start seeing himself as her equal... or even presume to try to influence or control her.

Ephedrina thought she'd be able to handle it - to manipulate Gascayn via his presumption. Make him more loyal. Maybe pay him less. Except... except that her sexual urges have been growing stronger, almost overwhelming. She's been dreaming of Gascayn. Of doing things with him... of him doing things to her. And that's dangerous. He might succeed in controlling her.

The risk is too great, so she has to cut it off before she gets in too deep. Even if part of her regrets it.

"Very well milady. I am but your servant. If you don't need me... well... I can only hope that one day that will change? I will always be willing to serve you faithfully."

"Who knows what the future holds." This is so awkward, but there's no helping it.

"I'll head to Riften. See about the Thieves Guild. If you ever need me, look for me there."

"I will Gascayn. And... thank you. I truly appreciate your service."

She almost leans in to kiss him... but she resists. It wouldn't help. Ephedrina returns to the inn in Kynesgrove to relax and study. It's quite pleasant.

It's not quite an appropriate way to address a noble, but Ephedrina lets it slide. The whole noble thing hasn't really worked out that well for her, and the woman is friendly. Still....

"He's not my 'feller'. He was my retainer, but he is not with me anymore."


"Oh, is that so?" The woman gives her a knowing look. "I guess things didn't work out."

"He was clearly hoping for something. The way he looked at you when your back was turned... and now he's gone."

It's not that Ephedrina wouldn't want a retainer who is in love with her. It could be quite useful, she expects. Still, she's satisfied she made the right decision. Gascayn was not handling himself the right way. Skyrim is dangerous. But Ephedrina is more dangerous, as various bandits, necromancers, and other riff-raff learn to their regret. Skyrim is also cold and wet.

Yet Ephedrina is enjoying herself. On her own, equal to any challenge thrown at her. The only real question is where she'll go and what she'll do. One day, Ephedrina arrives at Whiterun.

The guards do their usual "we're going to search you" drill, but she talks them out of it. That's a point in Whiterun's favour.

Inside the gates some poor woman is crudely restrained and forced to serve as a tour guide (and who knows what else). That's a point against Whiterun.

She goes to renew her licenses. The quartermaster is not a jerk about it, which is decent, but the fact that licenses are required in Whiterun also annoys her - making that whole thing a wash. Still, Whiterun is better than Windhelm... but, so far, Kynesgrove's been the most pleasant. Ephedrina pays a visit to the Jarl's advisor and undertakes to clear out some bandits in his hold. But the Jarl is not the only one with problems. Ephedrina spends a bit of time talking to the locals, finding several other issues that need solving. She's not sure the expected rewards are enough to cover the ongoing cost of permits, but with loot and her potion making thrown in, it'll probably be enough to put her ahead. That evening, Ephedrina plays her harp (acquired between Windhelm and Whiterun) at the local inn - the Bannered Mare. Her performance is well received, earning her a bit of coin (enough for a bath) and a free room for the night. The performance earns her more still.

As she's playing Ephedrina makes continued eye-contact with an attractive brunette. Afterwards, they chat. The brunette's name is Carlotta and Carlotta thinks Ephedrina is talented enough that she should go to the bard's college in Solitude.

It's not a bad idea.

Another thing that is not a bad idea is for the two to go to Ephedrina's room where they soon get naked.

It's Ephedrina's first time with a woman, and she likes it. "You're talented and brave and so incredibly beautiful. I can't believe you're making love to me." Carlotta says the sweetest things, and obviously knows her way around a woman's body. They kiss and grind and touch and tickle and poke. It feels great.

"No... stop... it's too much...." Ephedrina doesn't mean it, but she is overcome by the sensations. She's never had an orgasm, never masturbated, and doesn't know how to cope with the physical sensations overwhelming her.

Carlotta slows down and reassures her and then... patiently starts again, guiding Ephedrina along. Soon enough the sensations are back, even more intense.

"Yes... yes... no... please... yes... oooooooooohhhh..." Ephedrina goes right up to the edge again before wanting to stop, but before she can pull back Carlotta pushes her through. Moaning and thrashing Ephedrina clutches Carlotta as hard as she can. Covered in their mutual sexual fluids, not to mention their sweat, Ephedrina has her very first orgasm.

"I loved watching your face as you lost yourself," whispers Carlotta with a smile. Ephedrina giggles, then languidly sucks Carlotta's fingers clean. Later that evening - after her bath - Ephedrina masters another spell. It conjures adventuring equipment - a robe, a circlet, boots, and a magic staff. Realistically, she doesn't need any of them, preferring to trust in her sword and fan. But if life has taught her anything, it's to have more than one backup plan.

She really is ready for anything.