On January 29, 2015 (oh, those innocent times!), the third mod connection was made – @DocClox gave me permission to add Quick as you Like, a fun mod that had the player racing naked and bound across Skyrim. I cheated every time so I wouldn't get eaten by wolves.

I also learned how to randomize things in Papyrus, so auction messages, bidding scenes, and the slavery outcomes themselves no longer had to go in a set order.

Content Consumer also brought in more slave banners which I am placing here for posterity’s sake: 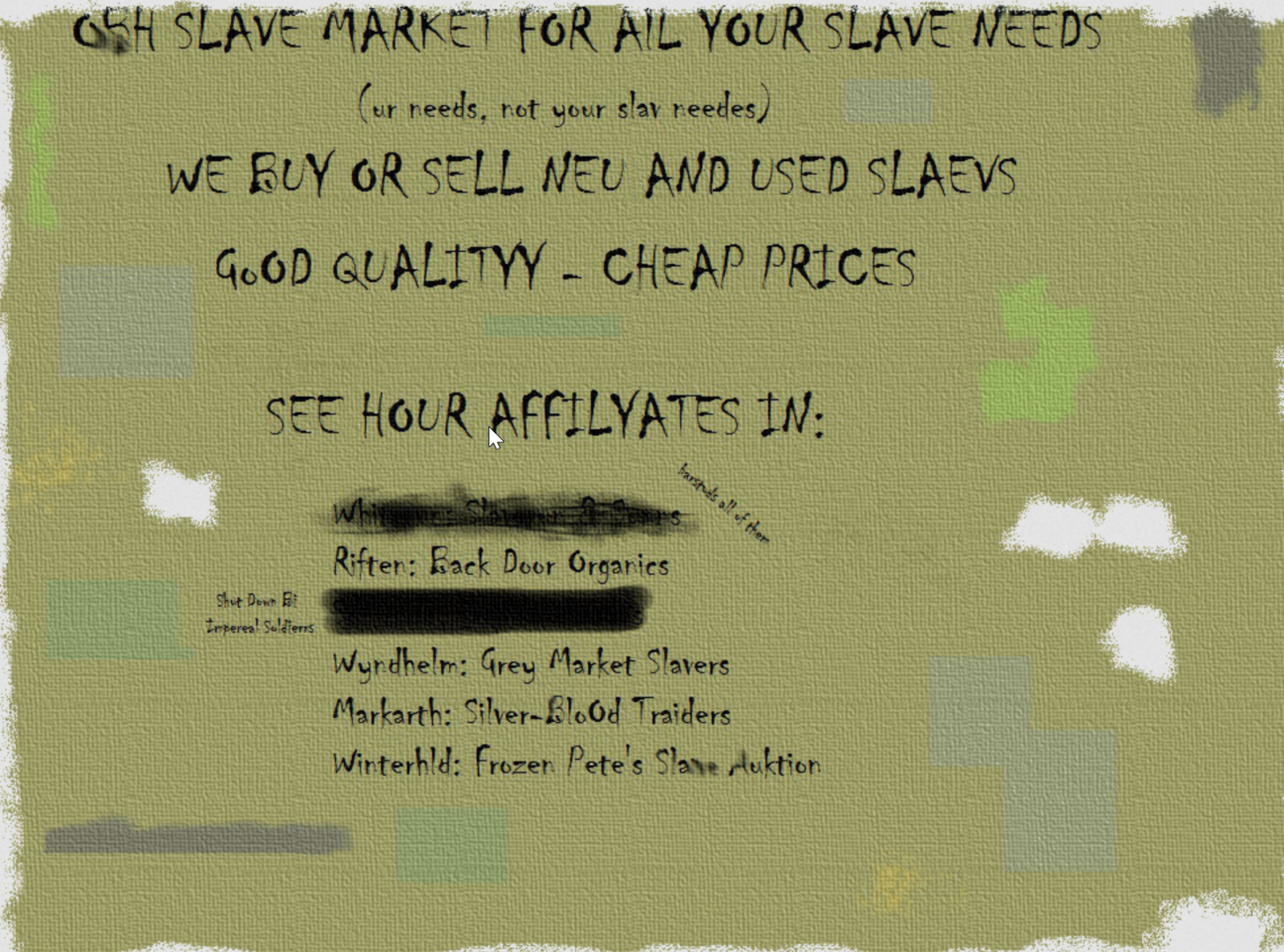 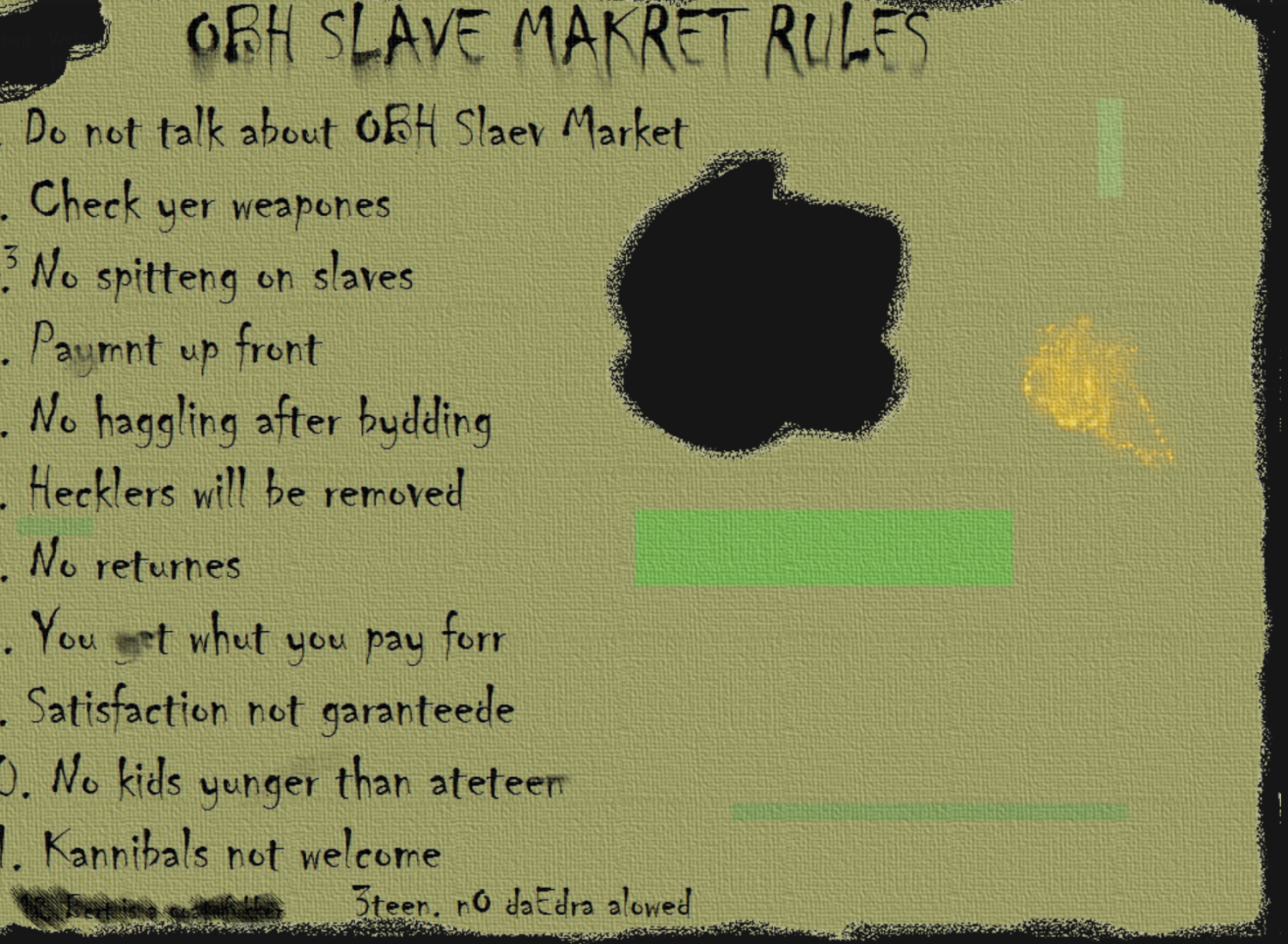 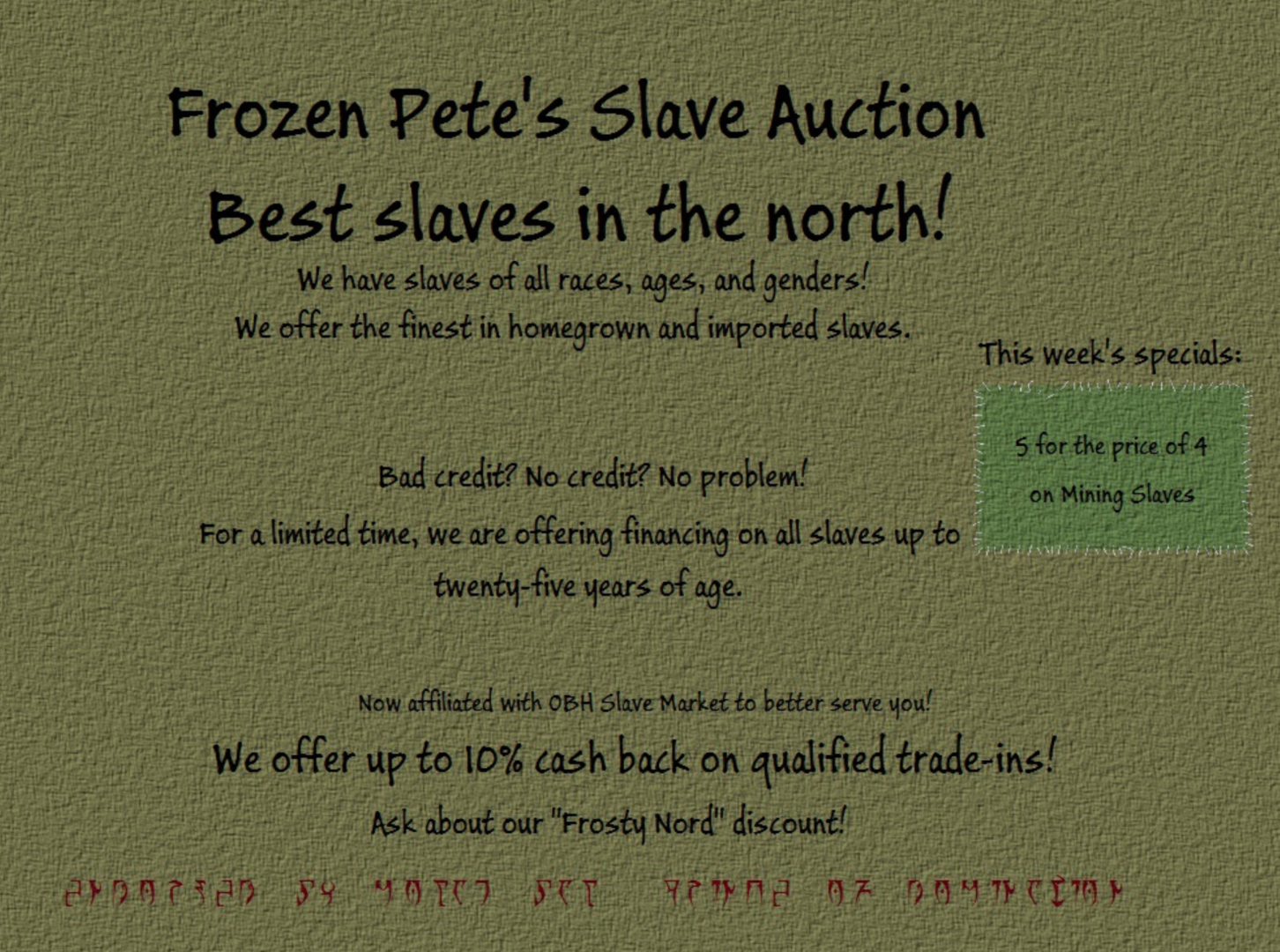 I thought they were hilarious and decided to stick them on random walls around Skyrim. Just be glad I didn’t follow any of our original ideas!

But not all was fun and games. The first major bug reared its ugly head just one day later.:

Falling through the floor for infinity upon reaching the market. This issue plagued the mod for weeks. Every time I thought I (or, more often, someone else) had it figured out, it would come roaring back.

February of 2015 also marked the first time I got this issue reported:

The ol’ “I got sent to the auction and then nothing happens” error, one that continues to pop up on the support thread to this very day.

Lessee, this was on February 5. Let’s see how long it took to find the answer.

Only three days! And it was CC who figured it out. I take back all the undeserved things I said about him. Which are none of them.

Ah, yes. The “everything is black when I get to SoT” bug. This one was my fault – I got code dyslexia when I added the fade out/fade in portion and ended up fading out when I meant to fade in, leaving poor SoT with a blinded player.

At this point I had Death Alternative set to send people to the auction only after being defeated by bandits. I figured that was most logical – I mean, a wolf wouldn’t be sending you to an auction, now would it? It also gave people opportunities to use some of the other available outcomes from DA. The mod worked reasonably well as long as you had Sanguine’s Debauchery (which I just assumed everyone had). It was the default choice if none of the other mods were available.

The thing to remember about the mod at this point was there was not yet an MCM, so the way it worked was this: every outcome had its own quest assigned to it, including separate quests for each of the SD owners (it was up to its current six by this point). The game would roll a random number, that number would correspond to a quest, the mod would check if that quest existed. If it did, that mod would start. If not, it would roll again until it found something. Not too shabby, if I do say so myself, although it led to a lot of checks that could have been made one time at the beginning.

The other thing that make it clunky was that the auction scenes had varied timing – some had more words than others and therefore took a little longer to finish. I added a “wait” command before each auction to keep the game from doing the next thing on its list until the scenes were finished but some of the auctions were longer than the wait and the player got sent out while the auctioneer was still talking. Rude!

I also finally got around to dealing with another issue – what to do with all the newly enslaved character’s gear? I investigated the usual “transfer it to a box” setup but I didn’t want to do that for a few reasons:

1 – They were only going to be in the cage for a short amount of time (unless the player just liked RPing hanging out in cells), so it didn’t seem worth it to stick everything in a box just to take it right back out again.

2 – Other mods that did the box thing always always had complaints about the way it worked in their support threads.

3 – I had no good way to give all the stuff to the mod that picked up the player after the auction. It would likely require the mod-maker to add special stuff to their own mod to take the handoff. I wanted the transition to be as easy as possible to attract as many mod-makers as possible to allow their mods to be added.

4 – The most important one – I tried to do it and couldn’t get it to work. This, in case you haven’t noticed, is the overarching theme to all my mod-making decisions.

With all of these issues, I chose the easiest thing I could think of – just a simple player.unequipall(). It wasn't until later that I got around to trying to add ZAZ cuffs that would keep the player from opening their inventory. One step at a time!

One other thing my “unequipall()” solution did not take into consideration was anything having to do with Devious Devices, which is an issue I steadfastly ignored all the way up until I handed the thing over to Lozeak, who finally added DD compatibility in SS+. If you want to know why I refused to add DD compatibility myself, I’ll ask you to look back to number 4, above. If you want to know why I didn’t reach out to the wonderful @Kimy to ask for help with that…I have no good answer. I am just an idiot.

The “fall through the floor” issue made me consider moving the auction yet again. After all, if removing Alduin’s Wall removed half the mountain, maybe other parts were unstable? CC came up with a great suggestion that I nearly went with: 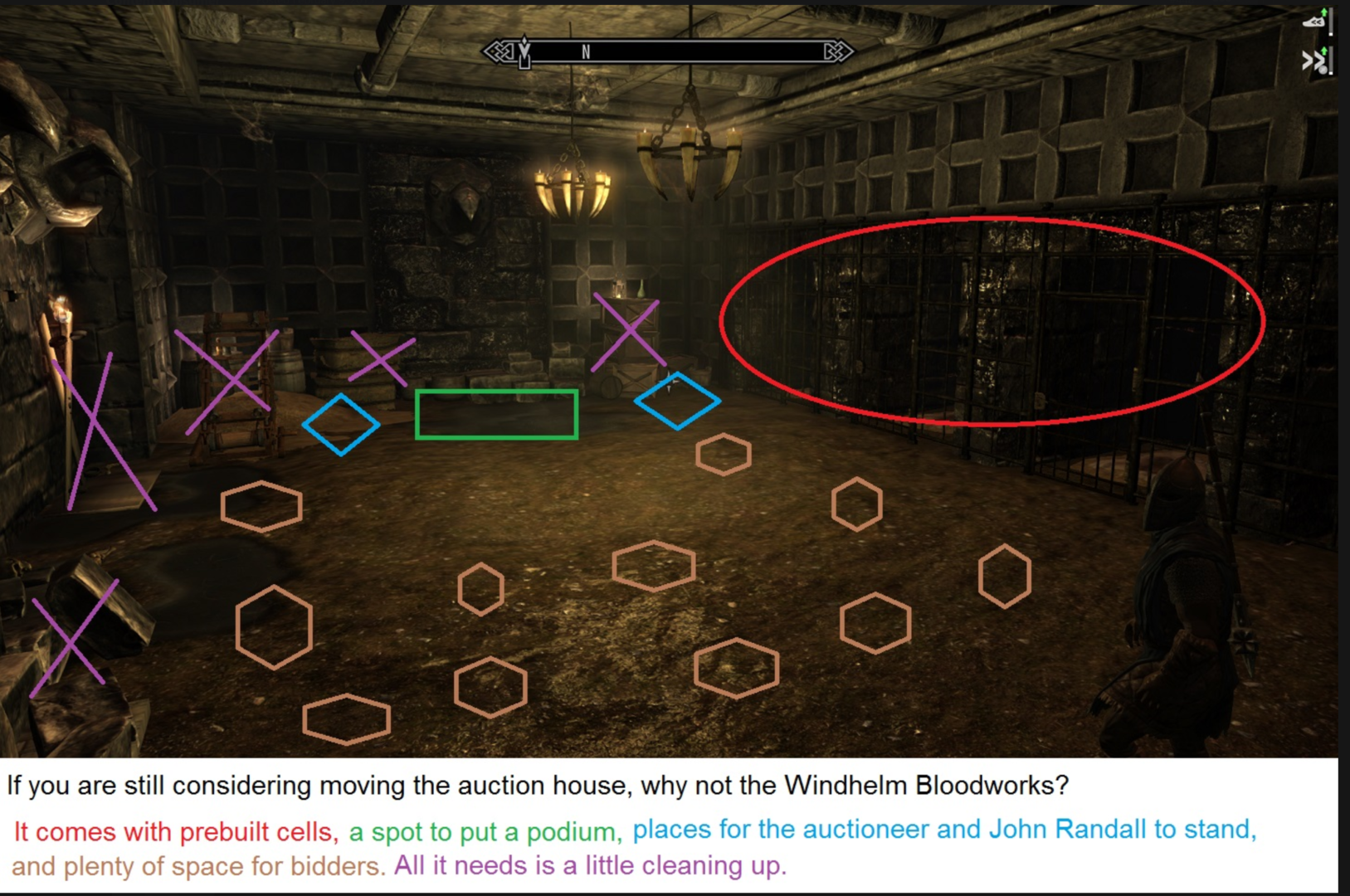 CC’s thoughts on where to put the new auction spawned a lot of interesting places and a line about him doing a survey, which I turned into an Easter Egg. There’s an NPC with some form of his name floating around somewhere.

We thought we had the solution to the "falling through the floor" bug when @Kenjoka pointed out that setting Death Alternative to "Ragdoll and Bleedout" appeared to fix it. This was a surprise because Sanguine's Debauchery had had an issue that was solved only by removing the "ragdoll" portion of that particular setting. Still, it seemed to work for some people. It was not the permanent solution, alas.

In mid February, Captured Dreams almost joined the party. I hadn’t even considered it until someone brought it up because I thought it was just a store that sold bondage stuff. I had no idea it involved quests of any sort. But there were some difficulties getting it to connect properly so it was put on hold.

In the meantime, the @zaira allowed me to connect to Maria Eden, another of my all-time favorite game experiences. On February 20th, @pchs' Wolfclub joined the party. The mod was growing by leaps and bounds!

I celebrated by moving the auction to its current home, a copied version of the Temple of Mara in Riften. It just looked nicer than the other options, the kind of place I could picture rich hoity-toity people gathering. A gentrified slave buying experience. While editing the room, I accidently removed part of the floor, which made for fun viewing because the navmesh remained, so people would walk partway across the opening and then abruptly fall into the cellar.

I probably should have fixed it immediately but the hole actually made it through a couple of minor upgrades, mostly for my own amusement.