Adds a variety of STDs as active effects to Skyrim using SexLab. 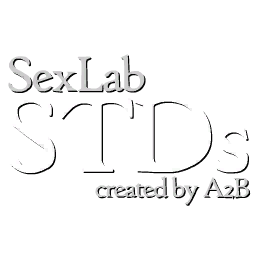 This is a mod to add an element of danger and realism to your sexual encounters within Skyrim.

Having sex now carries the risk of getting an STD that will be applied to your character as an active effect. There are quite a lot of different STDs that you can get, and each race has two STDs that you can only get from sex with members of that race. This mod includes real-life STDs, like Chlamydia, that can be caught from anyone, and also ones that I've made up to try and suit Skyrim's lore, such as 'Cuttirke' - an STD you can catch from Nords. If you'd like to suggest names that could replace the real-life STDs, please do! I'm awful at making up names that sound Skyrim-ish.

Ok, what effect do STDs have?

STDs lower your stats. You can lose Magicka, Stamina, Health, Strength (melee damage) or any combination of those 4.

So what happens if I get an STD?

All right, how do I protect myself from getting an STD?

Condoms, of course! This mod adds 5 condoms to the game that are made of different materials based on what condoms have been made with throughout history. The least effective condom is the Intestine condom, which is of course made from an animals intestine, and the most effective condom is the latex condom. Because Skyrim doesn't contain any latex (not by default, at least...) I've had to improvise on the crafting recipe. If you can improve it, let me know!

But where will I find condoms and cures?

Cures are created in a cooking pot and require one cure disease potion, plus one other ingredient, which varies on the type of STD you caught. The ingredients required are nearly all common foods, such as bread. But a couple of diseases have slightly more difficult requirements, like bear claws. All cures are created two at a time.

Condoms are created at the tanning rack. They require one leather strip, and one other material. You create 3 condoms at a time.

The way you set the mod up sucks! I want to change it!

You're in luck! My biggest pet-peeve with mods is when I can't make them work how I want them to. Fortunately, that's not a problem with SexLab STDs. Nearly everything in this mod is configurable! Basically the only thing you can't change is how effective each type of condom is.

How do I install/update/remove this mod?

Install the mod by moving the three files in the *.rar to <SteamApps>Skyrim\Data and then activating the *.esp using the Launcher, or your favourite mod manager.

From v1.3 onwards, you should be able to update the mod simply by overwriting the old files with the new ones, and letting the mod update itself. Because I've never coded an auto-updater before, there is a chance this won't work. If that's the case (first, I'm sorry!) then follow the instructions below for performing a clean save.

To remove the mod, use the uninstall option in the MCM and follow the instructions.

I want to mod this mod!

That's awesome. If you want to make any changes to the *.esp, then feel free. All I ask is for credit as the original author, and that you keep using the original logo.

If you want access to the source code... you need to wait a little while. I'm fine with sharing it, but I want to clean it up and make it readable before I make it public.

Features I still want to add:

How to perform a clean save:

If the Mod Configuration Menu doesn't appear or doesn't update:

Thank you for looking at my mod.

If you love or hate it, want to suggest features, or have a bug to report, please get in touch!

If you do download this mod, please remember that this is my first ever attempt at Skyrim modding, and some unexpected bugs are likely to pop up. The script shouldn't effect your savegame in any way and so uninstalling should be simple if you decide it isn't for you or if it won't work for some reason I can't predict.

Other Files from a2b