Last post I mentioned how trying to use exports of the Edhildil arms in the new robot bodies was giving me CTDs if they didn't have the pelvis attached to the mesh. Now, my initial thought was okay, fuckit, I'll just use them for combos that involve that pelvis. But on the other hand, this limitation annoyed me. So I used the .nif>.obj>.nif conversion routine on 'em and damn well forced them to work, then built up some adaptor parts to connect them to the Bikini body robot core while I was at it. 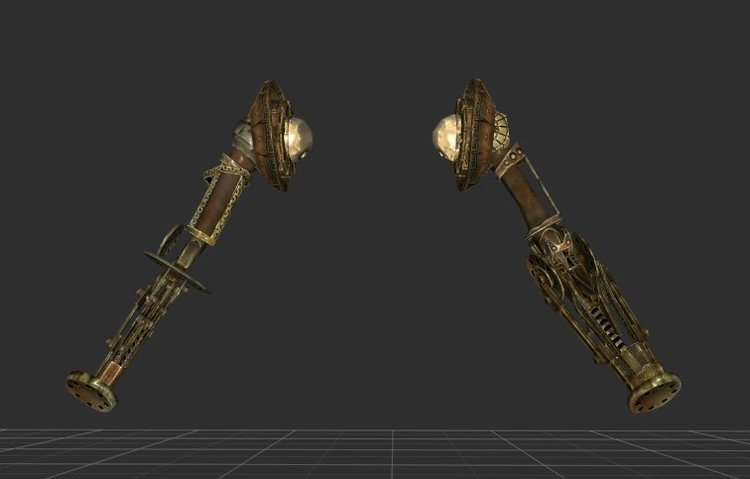 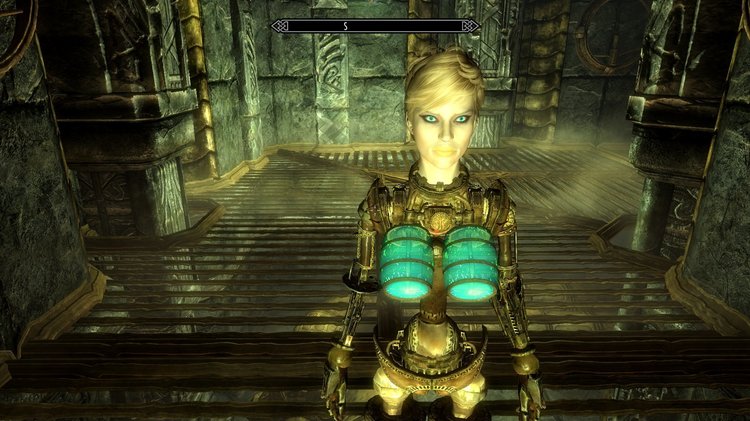 I ended up having to alter a fair bit of the weight-painting, though. I mentioned last post how I wanted to minimize the number of changes I made to the limb parts. But on the other hand, I no longer needed all the weighting they had to keep them lined up with the fleshy bits they used to connect to. The Edhildil shoulder caps were particularly badly affected by this- the weighting causes their bottom halves to fold inwards while the arms are down and stretch out when they're raised, thusly: 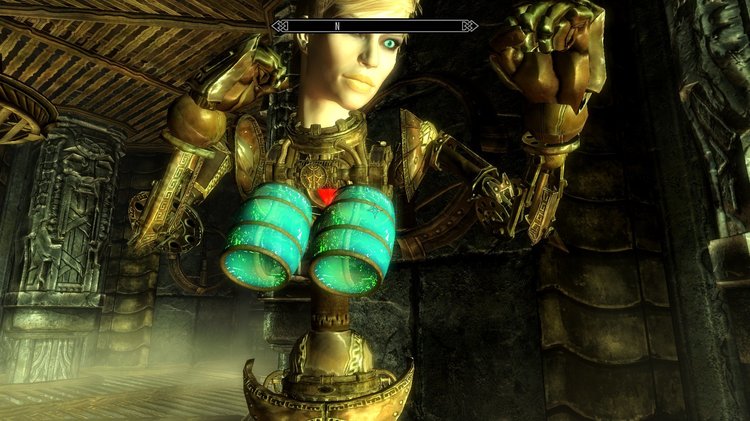 Something I could put up with for the sake of keeping giant holes from appearing when they were connected to flesh, but glaringly obvious when they're free-floating like this. I already figured I would have to change some weighting when reusing these parts for the robot bodies, as I noted back when I was converting the new Edhildil leg caps and found that their little bits of pelvis weighting were keeping them from showing big gaps in the inner thighs, so this wasn't exactly a surprise but it does add some work. The caps themselves were easy enough to fix. Just re-generated them and the arms separately from the BodySlide files (although I did have to do some new masking to counteract some minor errors that were much less noticeable when the results were buried in the bodies) and chopped everything but the clavicle weighting out from the caps, then re-painted that solid like I did for the Bikini Robot shoulders along with the filler parts. Unfortunately the rest of the left arm's shoulder assembly was also weighted in a way that made it clip right through that filler. Some careful re-painting and *de*-painting there fixed that issue, and left me with a shoulder were everything stayed as a solid piece during movement. 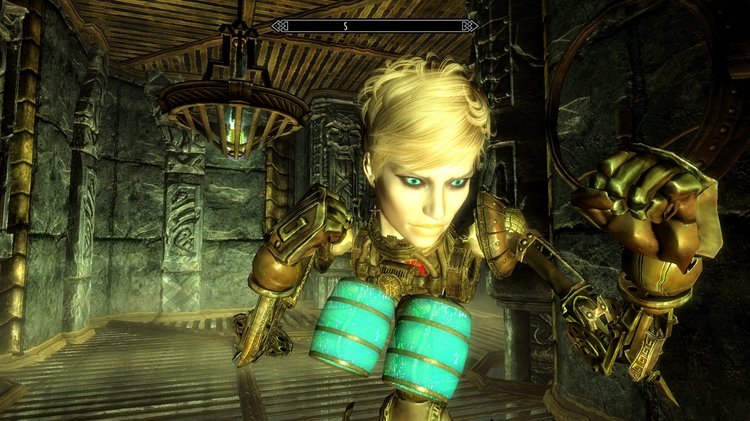 The downside is that the upper arms now kinda phase though the shoulder pieces as they move, but that's much less noticeably obnoxious than all the distorted flexi-metal. And of course just like with the Bikini Robot shoulders the parts now kinda hover outside of the shoulder jointing in many poses, but we'll just stick to the 'magnetic joints' dodge again as far as that goes. 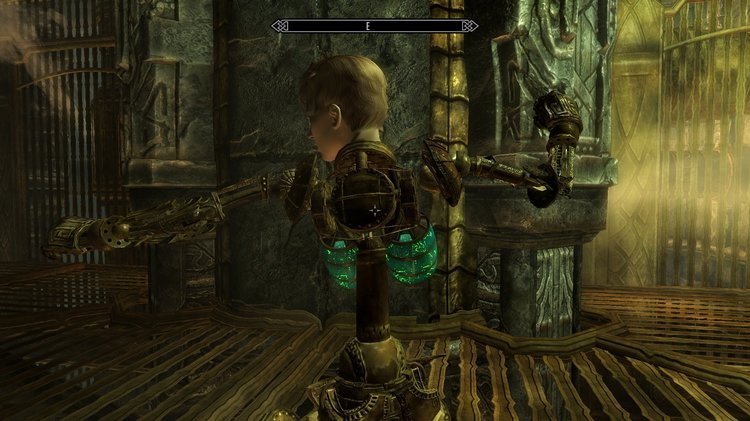 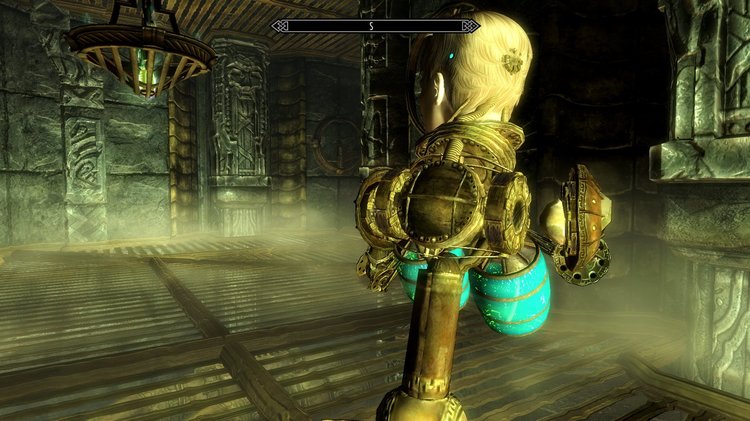 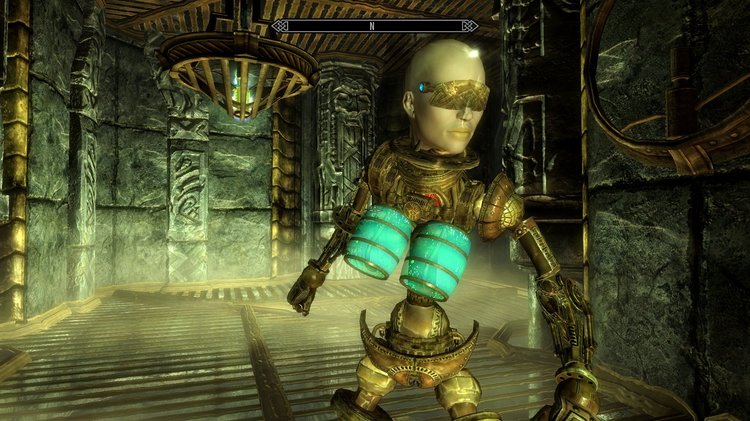 I'll probably have to replicate some of this process as I adapt the Gynoid parts. The shoulders might not be too bad, but there's definitely some distortion on the hip caps that could be eliminated. The Edhildil pelvis is a solid enough chunk that I don't really have to worry about it, though.

Also in the last post I mentioned how I wasn't inclined to do this in a 'build your own' style like I did with the -BAF- set. Too many fiddly parts and too many things that would need adjusted to slap this into the middle of the BodySlide-generated limbs, and the issues with the Edhildil arms weren't helping that mindset. But on the other hand...

While I was doing some bathroom thinking (the best kind of thinkin'!) before starting the .obj conversion on the arms, it occurred to me that the only real problem was the idea of slotting this work into the -BAF- BodySlide files. I've been using BS to pull off my tricks here for so long that it was the first place my mind went when considering the idea, but I was already planning on building this out as separate pre-built 'modules' (core, limbs) that I could swap around to create the different bodies, pretty much like how I built the existing Bikini version but skipping the BS element for swapping the legs around. The problem with that is that I'm planning on having more than just the two 'cores' from that set. At the very least I have the three breastplate variations and the 'nude' version planned, and I'd like to experiment with a couple of less-booby takes on the concept as well. But unless I want to significantly limit the number of pre-built combinations, every new core adds a whole full set of limb variations as well, ballooning the item count. Since I was planning on abandoning the original Edhildil version of the torso and basing all the new cores on the Bikini version, however, it wouldn't really be that hard to build the cores as their own parts and assign the limb modules to a different slot, letting you swap between them at will. The only real change I would have to make to my plans was making sure that all the new adaptations for the shoulders fit into the existing joint plate on the Bikini torso instead of possibly replacing it as my initial brainstorming had considered.

From there, the only real hangups are logistical. Specifically, which slots to use and how to break down the modules. The upper torso should obviously be the slot 32 'core' part, both from a logical standpoint (it's where all the 'organs' are) and because it's got the most little bits that would be a pain in the ass to change slot assignments on. And also because it's kind of amusing to see it just hanging around by itself. 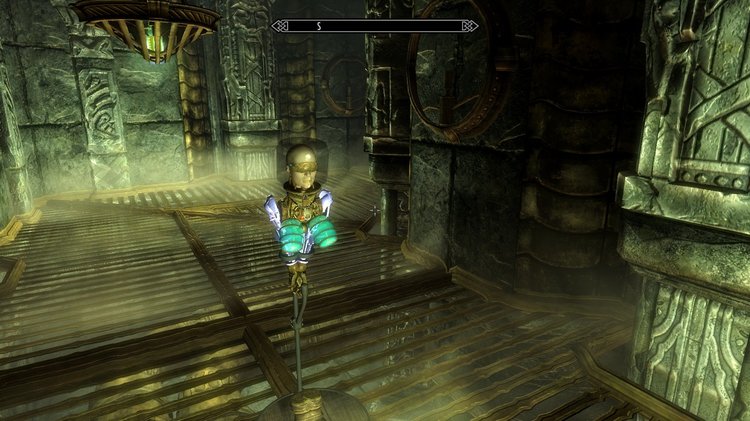 The arms I can probably throw on the hands slot after tossing the appropriate hand mesh into the .nif file. I'll have to double up on the Gynoid arms to account for both hand types, of course, but I'd still have to do that if I was to put them in slot 34 instead, given that I want to provide copies of the Gynoid armor bits for use with this. And I can't put them in any slot but those two if I want them to show up in first-person. The shoulder caps I'm not sure if I want on a separate slot from the arms or not. There's an argument for it simplifying things either way. The Edhildil cap is already built out separately, so it's no work to change things there, and I'm probably going to have to do the same thing for the same reasons when I build the Gynoid limbs. The only particular hangups there are the slot question- 57 would be the logical one to use, but I also want to port in some of the existing pauldron bits so that's out, but any other slot might not show up in first-person, but it's not like you stretch enough to see the shoulders anyway, etc- and whether or not I want to include the Bikini arm to Gynoid/Edhildil cap adaptor bits I made for the -BAF-set. Although using those would already mean either doubling up on the entire Bikini arm set or putting those shoulder pieces on yet another slot.

The biggest problem, however, is with the hips and legs. They are basically non-interchangeable. All of the hip jointing functions in different ways with different clearances, mandating that each joint be used with the pelvis it was designed for. I would've liked to have the pelvis/lower spine on one slot and then the full legs on another, but there's really not much point in even giving the option to mix and match the two when this is what happens: 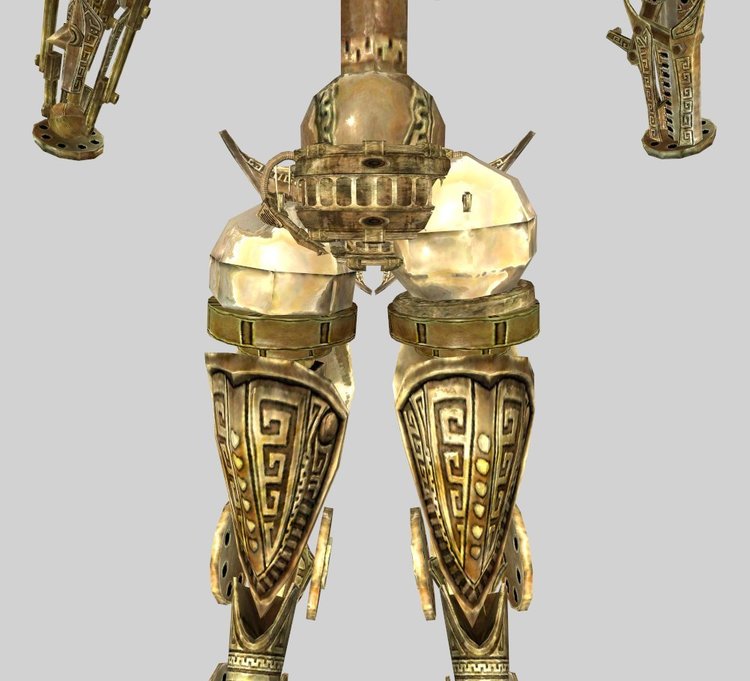 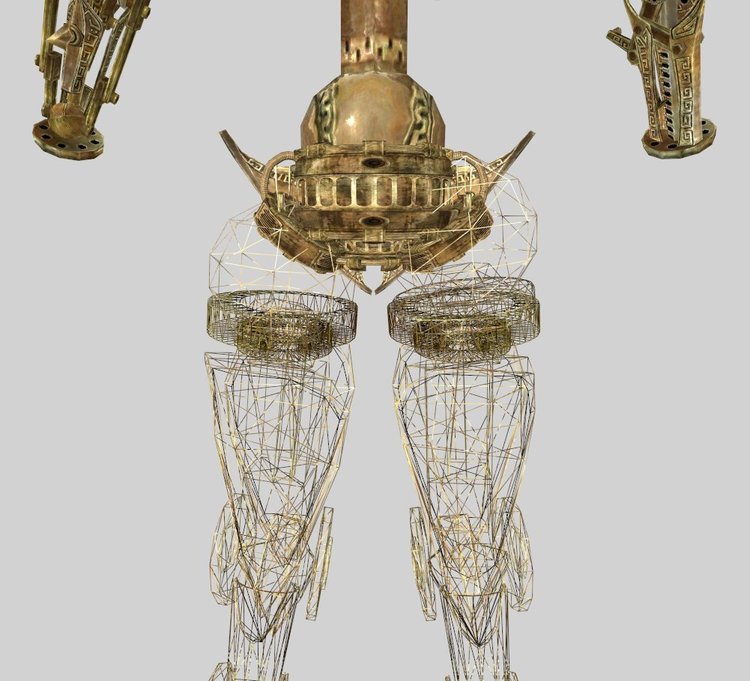 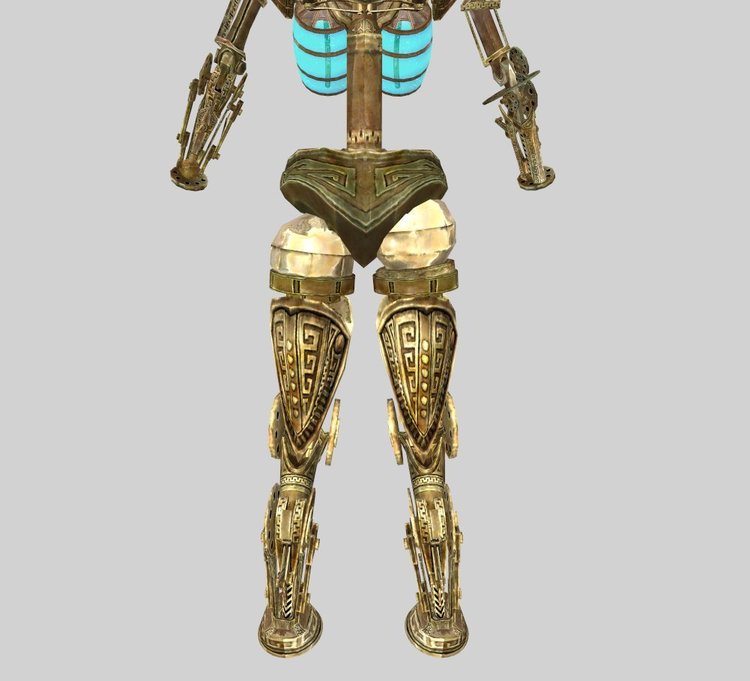 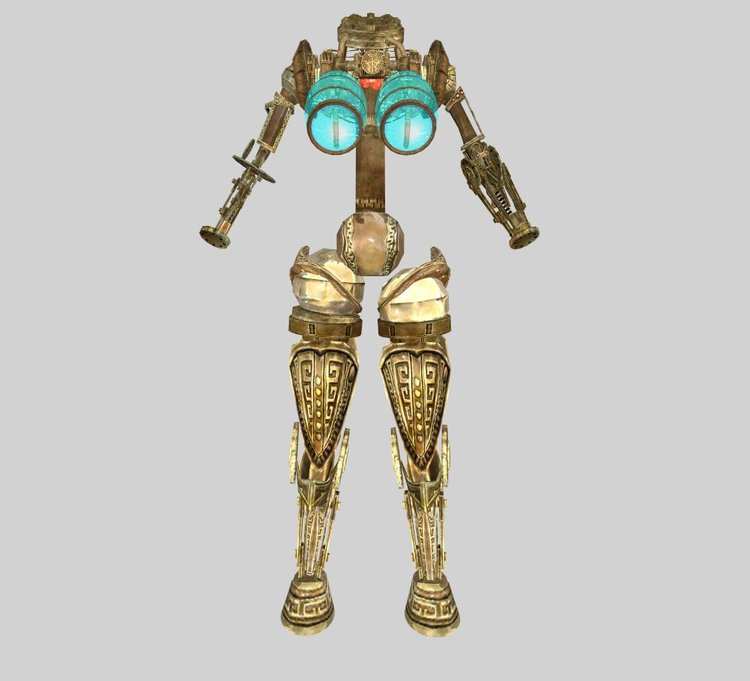 Making the module encompass the whole pelvic assembly down to the thigh caps is a bit more feasible. Setting the Beast and Bikini legs in particular to just take up the boot slot would work pretty well, and the raised legs can have their NiOverride height data slapped back onto them. The Bikini thigh plates can be spun off to one of the leg armor slots to get them out of the way. Dealing with the disassembled version's NiO settings is a bit trickier. The slickest way to do it would be to have the data on the relevant pelvis .nif, so that it automatically sinks if you take the legs off like the Dwarven Amputee mod does, but I have no idea how to pull that off. (And I also kinda prefer having a dataless version available for those so as to not tax Display Model's NiO cancel feature.) The less elegant solution would be to provide a second copy of the pelvis model or an equipable token taking up the foot slot with the data added, but it's a much more workable one.

But the legs without thigh caps complicate things. The best solution there might be to build them into the pelvis assemblies as well. This will actually make things much easier for the original Edhildil legs, since they're built that way to begin with and especially since I didn't prioritize keeping their hip jointing intact when I did the masking, given how you'll never see it when it's tucked into a body and how much of an enormous pain in the ass working around those bits is. The question there involves the feet and the new legs; if the new legs are on the foot slot to work independently of the caps, they're going to have to have copies of the Edhildil feet tossed into their mesh. Which means that they'll have to be doubled up, and also means that the feet will also have to have separate versions that only work with the old Edhildil legs. Unless I just make the whole spine-to-foot assembly for the old legs one piece in two iterations for each foot, or toss the new legs onto some other random slot... There doesn't really seem to be a 'clean' solution here.

Affixing the Gynoid legs to a permanent hip assembly does seem to be the cleanest solution there, though. Their hip jointing was always going to be a bit of a problem, as surprisingly large as it is. It worked better with the existing Bikini version pelvis than I expected, but it still had a lot of visible clipping that I wanted to cover up. And the hip caps basically require that all the wing detailing be re-worked to keep them from clipping through each other. And of course, even further design considerations and some de-weighting will be needed to get something that I can also use with the Edhildil leg cap adaptors... 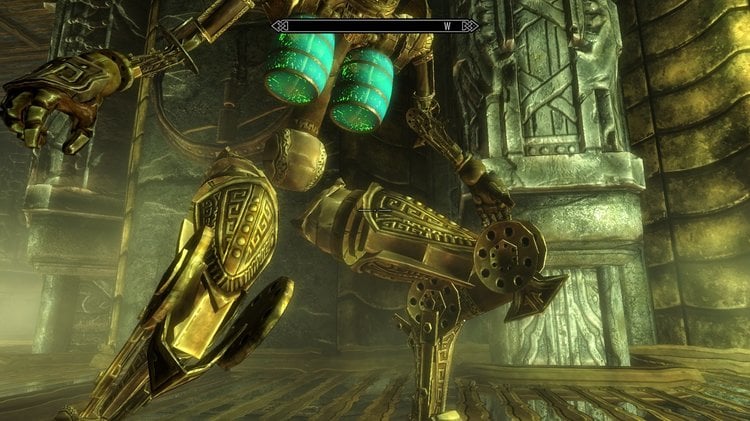 But the single best part of this idea is that I won't have to make four copies of the full legs to go with the four foot options from the set. It would give me at least one place where I'm just reusing the existing work like I initially expected to.

So yeah, surprise! You're getting a modular robot framework after all. As for the name... I haven't thought one up yet. -MAF- maybe? Modular Automaton Framework? Yeah, whatever, we'll go with that for now.

Also also, I'm probably a few days late as I don't recall exactly when I did the first work for it, but it's been about a year since I first started on this whole Dwarven Cyborg project with my initial ideas for the head set. So happy birthday, this stuff! And this year I've even got an AC so I don't feel like I'm literally dying while I'm working on it. That's a definite plus.