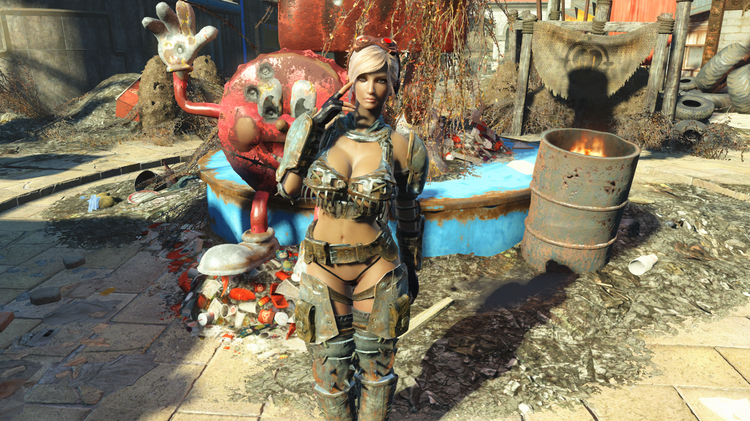 Just an image of FO4 Cris dressed as a raider for you all, just for her trip through Nuka World where she becomes queen of the raiders. I don't have anything lined up for the actual DLC but I do have an idea for a comic after the events of the DLC.

But that's in the future the main meat of this entry is talking about other games, more specifically Fire Emblem Warriors and Super Mario Odyssey. Basically a "review" of Odyssey and a bit of bitching about Warriors.

So onto the bitching. Warriors is a good game, it manages to capture the feel of a fire emblem game despite its Dynasty Warriors veneer (no I have no idea what the fuck I'm talking about either) however there are annoyances the first of which is a type of mission called Shadow Elimination where you're tasked with taking out a boss while weaker versions of said boss rush your commander and/or base until you take out the two summoners that are on the opposite side of the map as well as dealing with the buffers, long range attacks that target your base and healers that appear to buff, attack your base and heal the shadows respectively and some of them even have other annoying enemies that attack (one had two archers that can take your base in 2 seconds if you don't deal with them which is bullshit) which is fun. It's a pretty badly designed mission type as the shadows (which you need to kill) while weaker than the boss (slightly and I swear some are actually more powerful than the boss) need to be killed in order to progress through the mission overall it's a pretty annoying and badly designed missions type. In addition to the shadow elimination missions is one fort defense mission in the second history map (the fates one) where they give a powered up commander a straight path to your base where if you don't depower him will kill your base captain causing you to auto lose, it's another poorly designed mission where you have to go against what you're supposed to do (defend forts) in order to give yourself time to deal with the heroes and have chance of surviving. Finally there's a mission tha restricts what gender of character you can use and with one gender having less weapon options than the other makes this mission fucking annoying, I was forced into using male characters (the only male characters I actually enjoy using are Marth, Chrom (who I only enjoy using ebcause he's a male Lucina effectively) and Xander (who is underleveled for this mission) which is mainly sword users, there are seven male sword users out of the twelve characters in the game, compared to the relative balanced number of female characters (sort of, all the lance users in the game are female) which makes this mission annoying as it throws high res lance users at you and I don't like playing as Frederick (the only male axe user) meaning taking down commanders time consuming pretty much shafting any chance you get at getting S rank for the mission (which you need to do to get the item you need to power up one of the twins' unique weapons.) So yeah there are some frustrations with the game, seriously they should have added Ephraim (especially since the director said Ephraim is his favourite Fire Emblem character) just to balance the weapon disparity a bit.

But anyway onto Mario Odyssey, I fucking loved this game. It's far better than BotW (which is a 7/10 and too damn quiet) and well worth getting a switch for alone. It does have some niggly wee problems (mainly the camera but it's nothing major) but everything else about the game is solid, it's actually my first proper Mario game and it's made one hell of a good first impression on me. I still need to collect the moons but the puzzles to get them are genuinely enjoyable and get me thinking and it's nice to play a game that doesn't punish you too badly for any mistakes you make (or punish you for just fucking exploring) and any mistake I did make felt like my own fuck up rather than the game deciding I was having too much fun (or just starting to have fun) and throwing something at me to stop the fun, although the Luncheon kingdom is still my least favourite.

Also in regards to the title being Odyssey, the other Odyssey game coming out is catching my interest. I said I wasn't going to get another Wide Open World or Fuck All game after BotW disappointed me so much but I saw a video comparing Assassin's Creed Odyssey to Mass Effect (with gameplay to back it up) and it piqued my interest so I'll be keeping an eye on it and maybe picking it up when it gets released. Also Anthem has me in torn, it's looking good and has power armour in it but it's EA and I'm thinking that they'll find some way of fucking it up so I'm going to wait for reviews before I consider buying it.