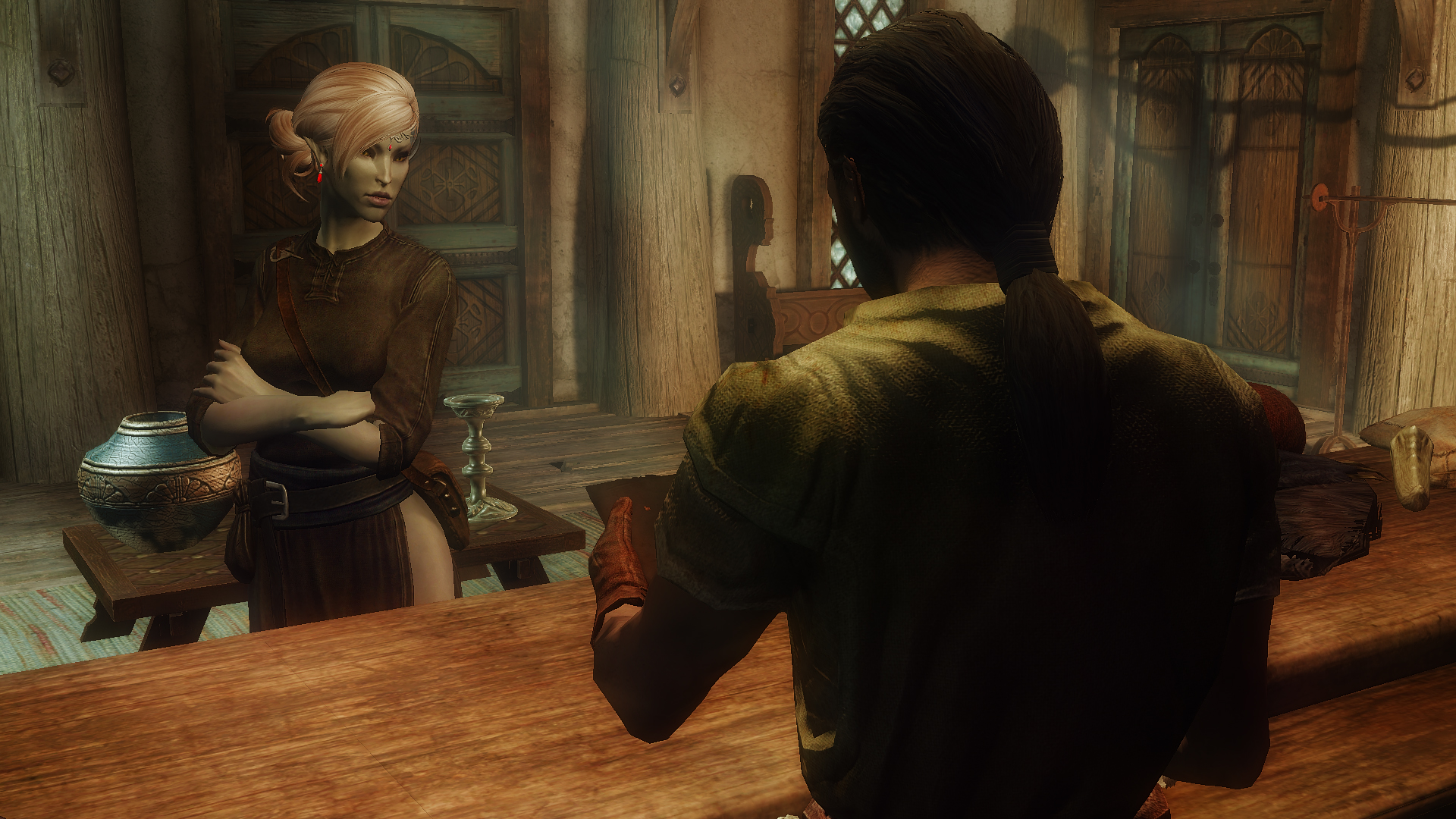 "Can you do it in one month?" Selune asked Belethor.


The Breton eyed the list she had handed him, his expression one of resignation and annoyance. "That's pretty short notice for some of this," he pointed out. "Give me a month and a half and I can guarantee it."

"You've worked miracles before for us, Belethor," Selune said. "My Master requires several of those ingredients be as fresh as possible. One month is already pushing it. I can't give you any more."

"I don't know..." Belethor said, mumbling under his breath as he tried to work out how he could manage it. A look of realization crossed his features. "I think I can do it, but... well..." 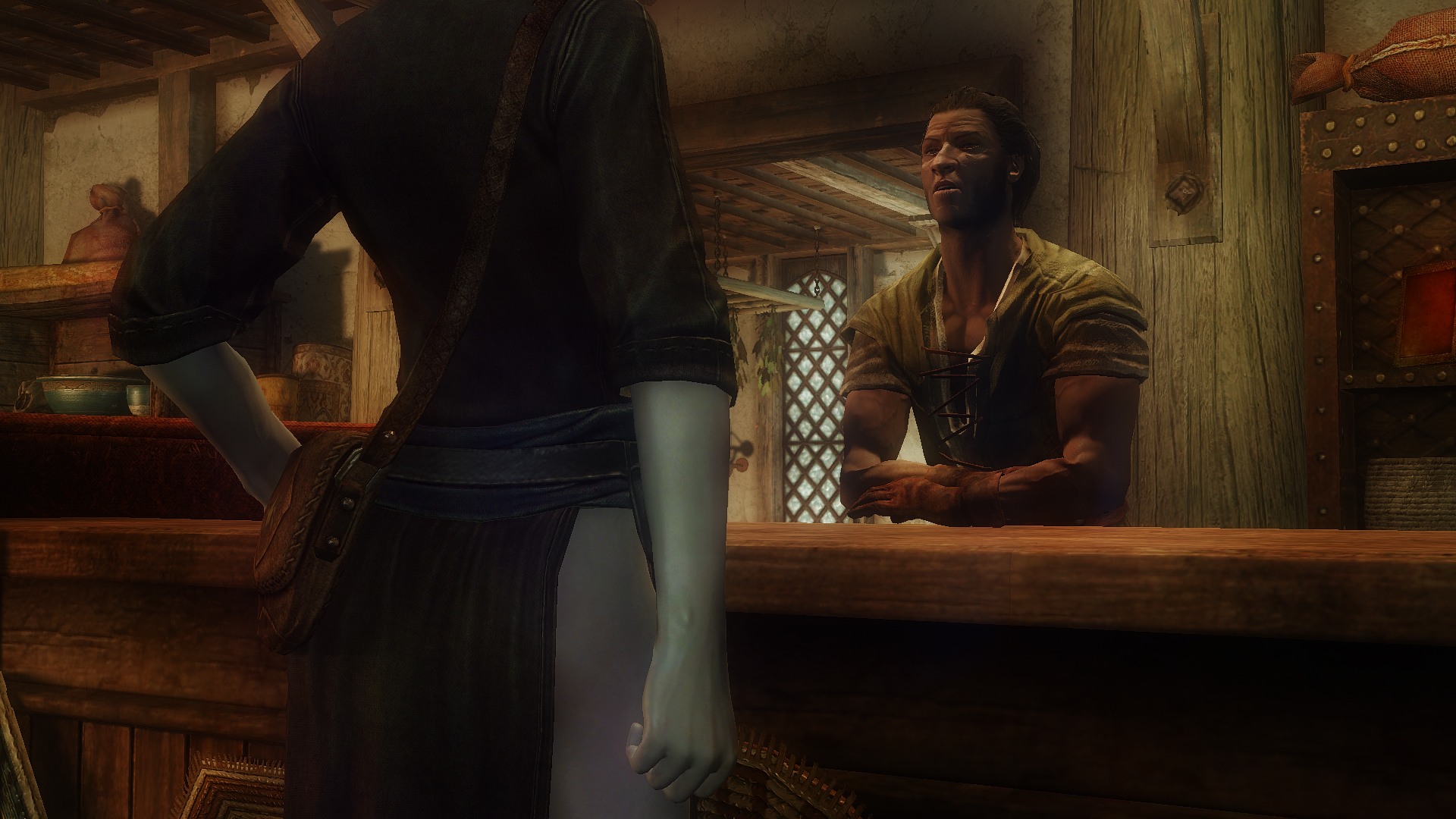 "Well see, I have a... close-to-home supplier for that hallucinogenic leaf you're asking for. That's the one giving me trouble, you see. Grows it right here in Skyrim. I have a crop about to come due that will cut it close, but should be ready within your window. Problem is, my buyer won't be happy if some of it, shall we say, goes missing."

"I see," Selune said. "So how much extra will you be charging?"

Belethor shook his head. "The cost is gonna double, and I'm going to need half up front."

Selune was taken aback. "Ridiculous!" she said. "All that for a few leaves? Neloth would have my head if I spent that much of his gold!" 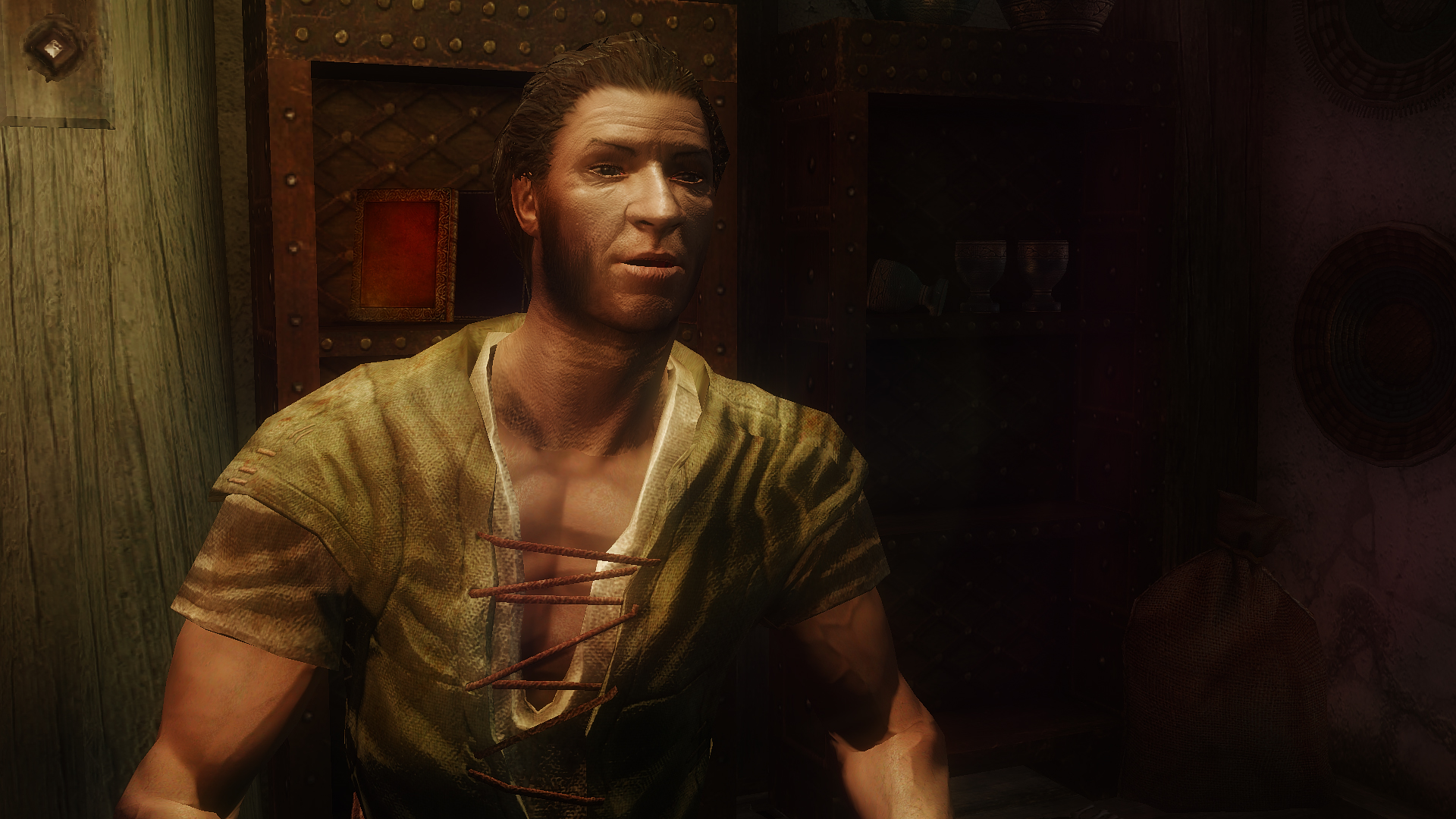 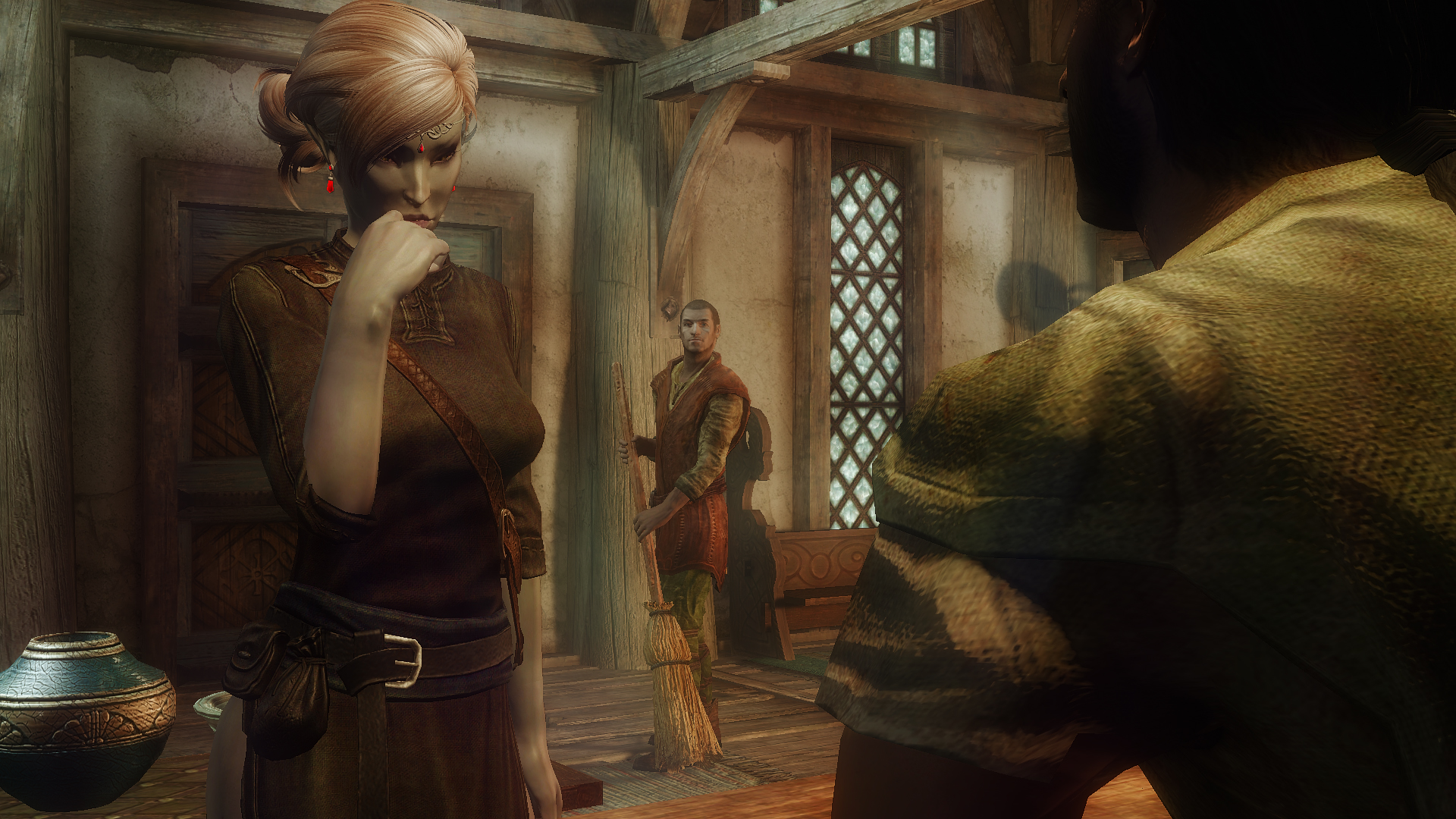 Selune grumbled. She couldn't decide if Neloth would be more upset that she spent so much gold or if she came back empty handed. At best, he'd revoke her clothing privileges again for gods' know how long. At worst, her mouth would be Talvas' personal fuck-toy for an entire month. Neither was an idea she relished.

She knew Belethor hadn't forgotten her little display a few months ago... 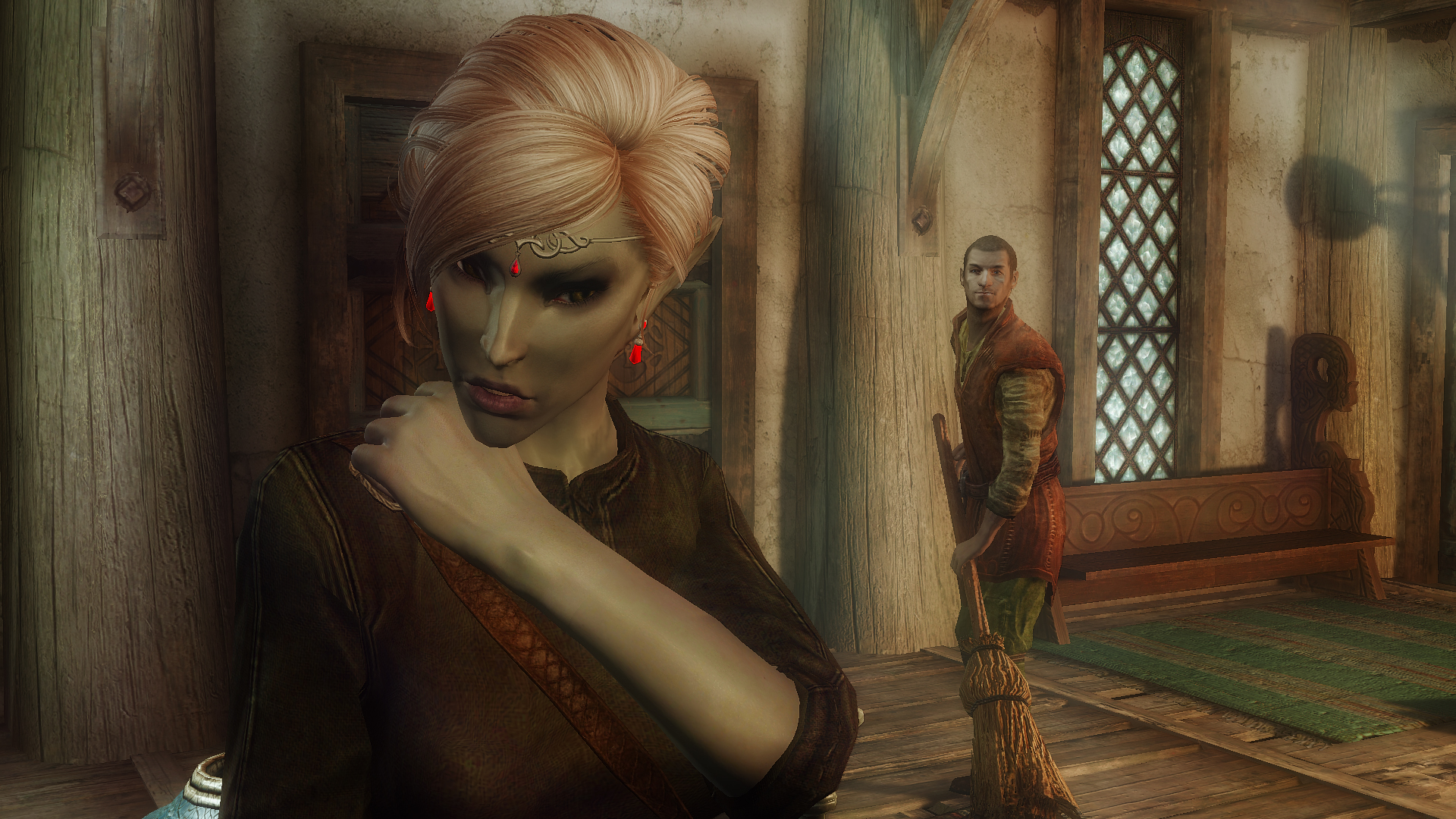 "Fine, you pervert," she said, slipping her bag off her shoulder. A bit of nudity now to save a month or more of that and worse later seemed a fair trade. She could feel his assistant's eyes on her as she undressed, carefully placing her clothes where they couldn't mysteriously vanish without her noticing.

"Does this convince you to find a way to cut the price a bit more?" Selune asked.


Belethor rubbed his chin as he carefully scanned her naked form. "You make a strong case," he said, grinning devilishly, "but I think I need a little more to go on..." 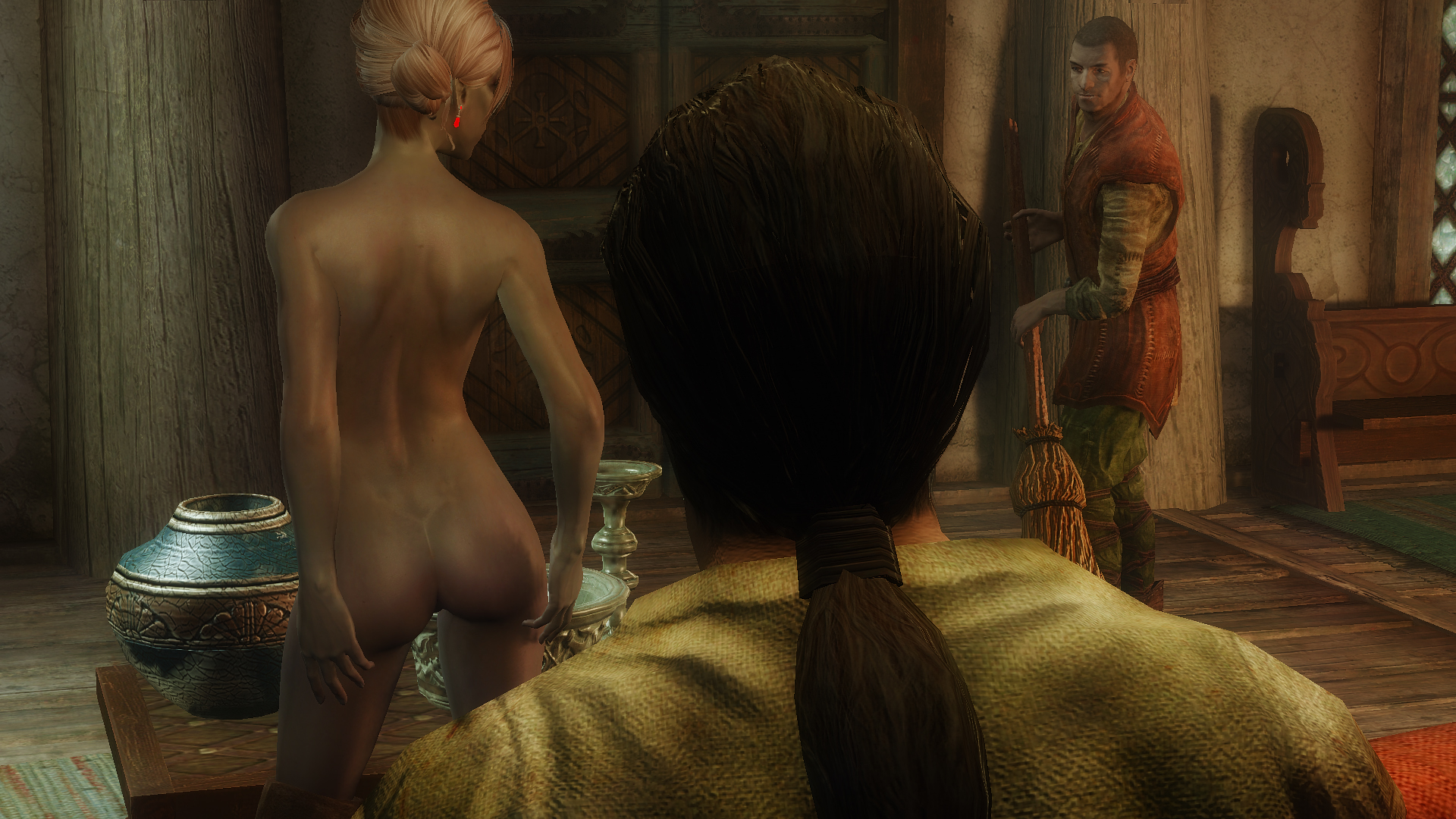 Selune grumbled under her breath and spun around, giving Belethor a good backside view and his assistant a full frontal perspective. She eyed the door nervously - someone could walk in at any time.

"Now that I think about it," Belethor said after an uncomfortably long pause, "there may be a way you can save me enough gold to make this happen!"

"And what would that be?" Selune asked.

"My assistant over there, Sigurd. I actually owe him a big bonus coming up. He worked clear through Saturalia but I haven't had the spare coin to pay him what I owe between securing your master's deals and making sure my legitimate business can stay open," he said. Selune had a feeling she knew where this was going. "If you were to give him some, uh... alternate compensation, I think that might be just what I need."

Selune and Sigurd looked at each other with surprise. She turned back to Belethor and said, "Fine, but I choose how to do it. Deal?" 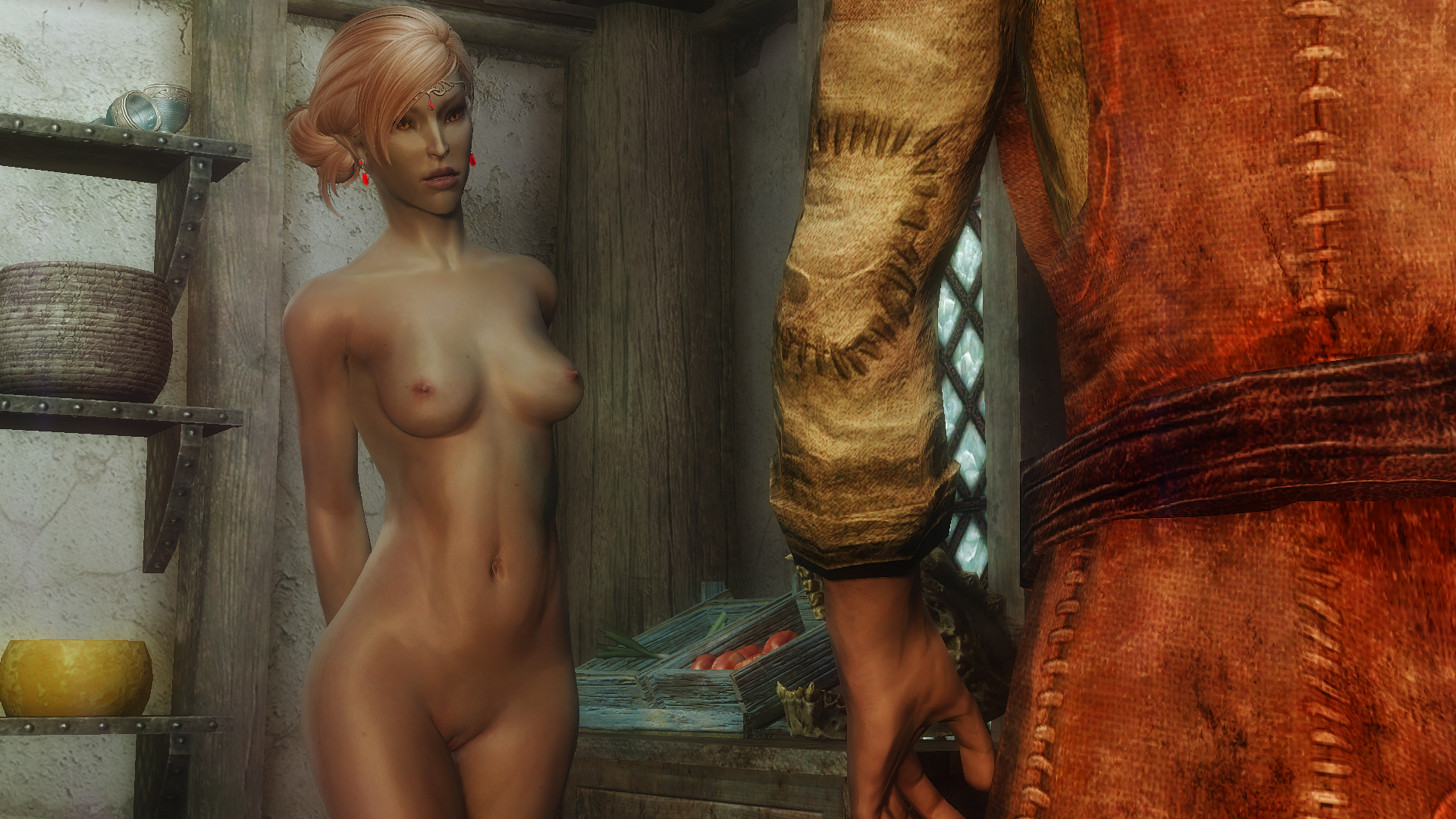 Still, she had to make this good. She put a sway in her hips and faked a smile as best she could. "Well then, Sigurd. Time for your bonus..." 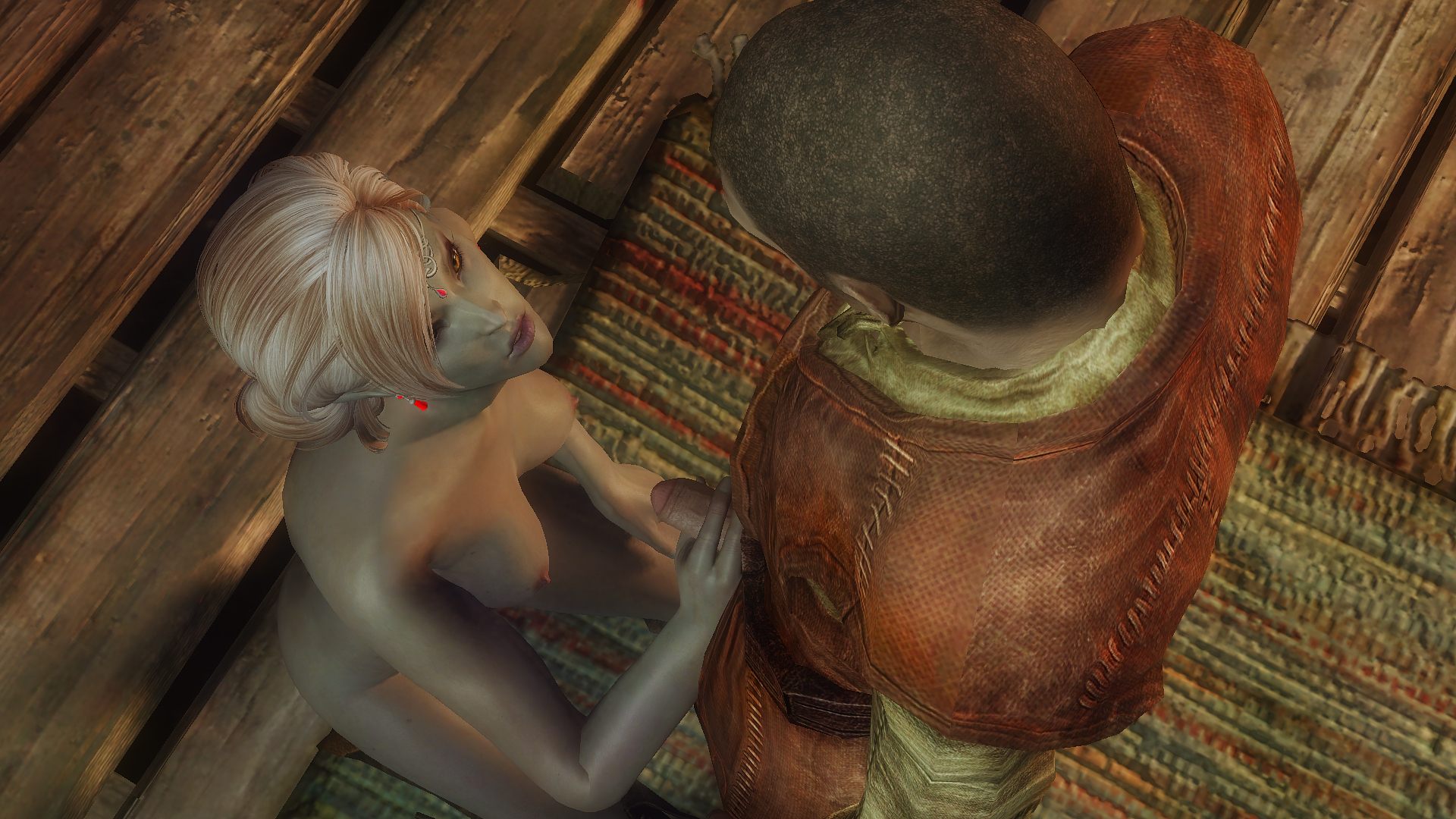 She reached into his pants and slipped out his already rock solid cock. She stroked his length as she locked eyes with him. "Just relax and let me do everything," she said, spicing her words with breathy lust. 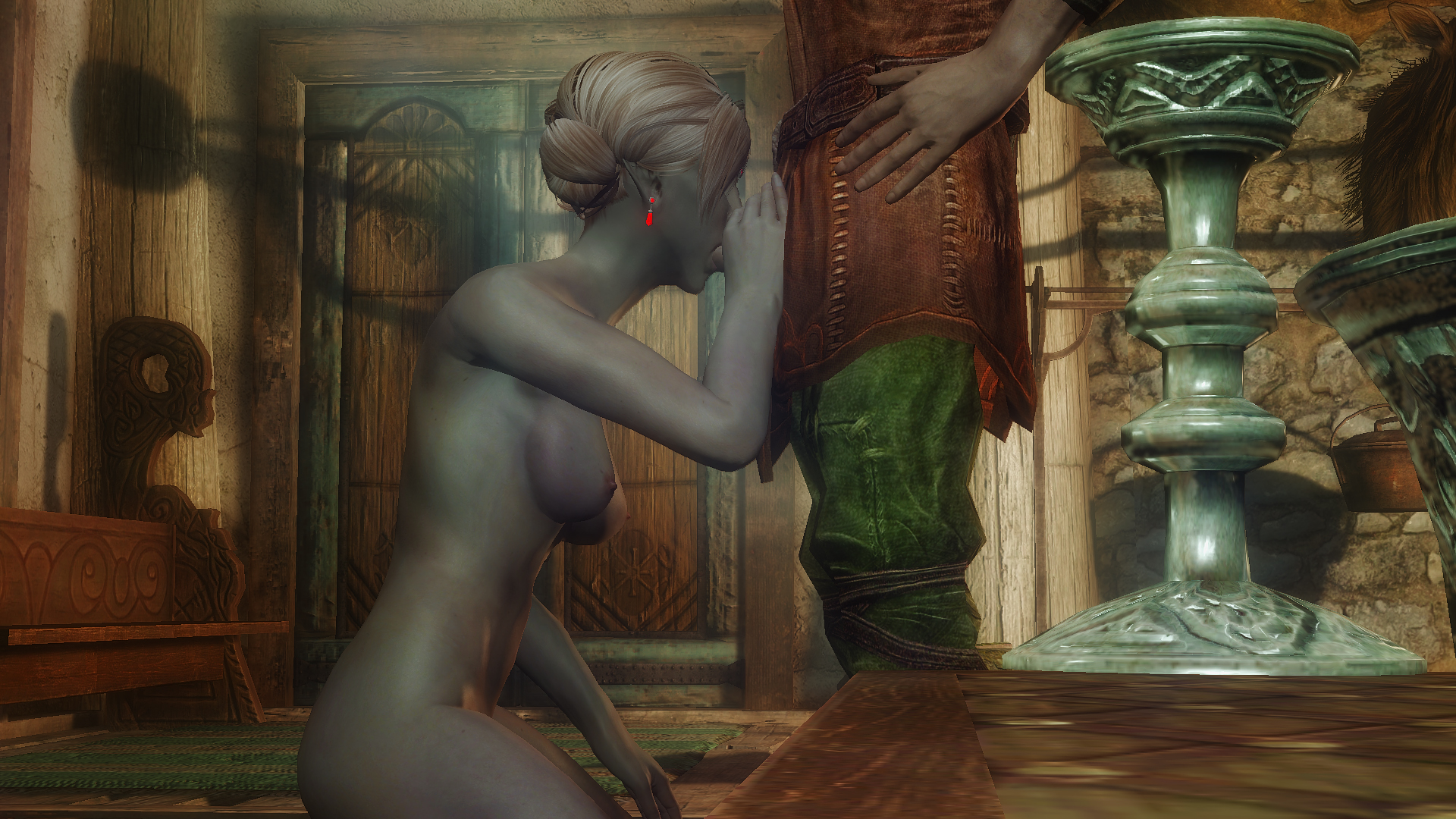 Selune leaned forward and slipped the head of his cock between her lips, kissing it softly. Her tongue darted out danced around the hot, pink head. She bobbed slightly, inching further down his shaft bit by bit. She could already feel him twitching and squirming under her ministrations, a sensation she found more arousing than she anticipated. The reaction from her partners to her skill was always her favorite part of this at times laborious task. 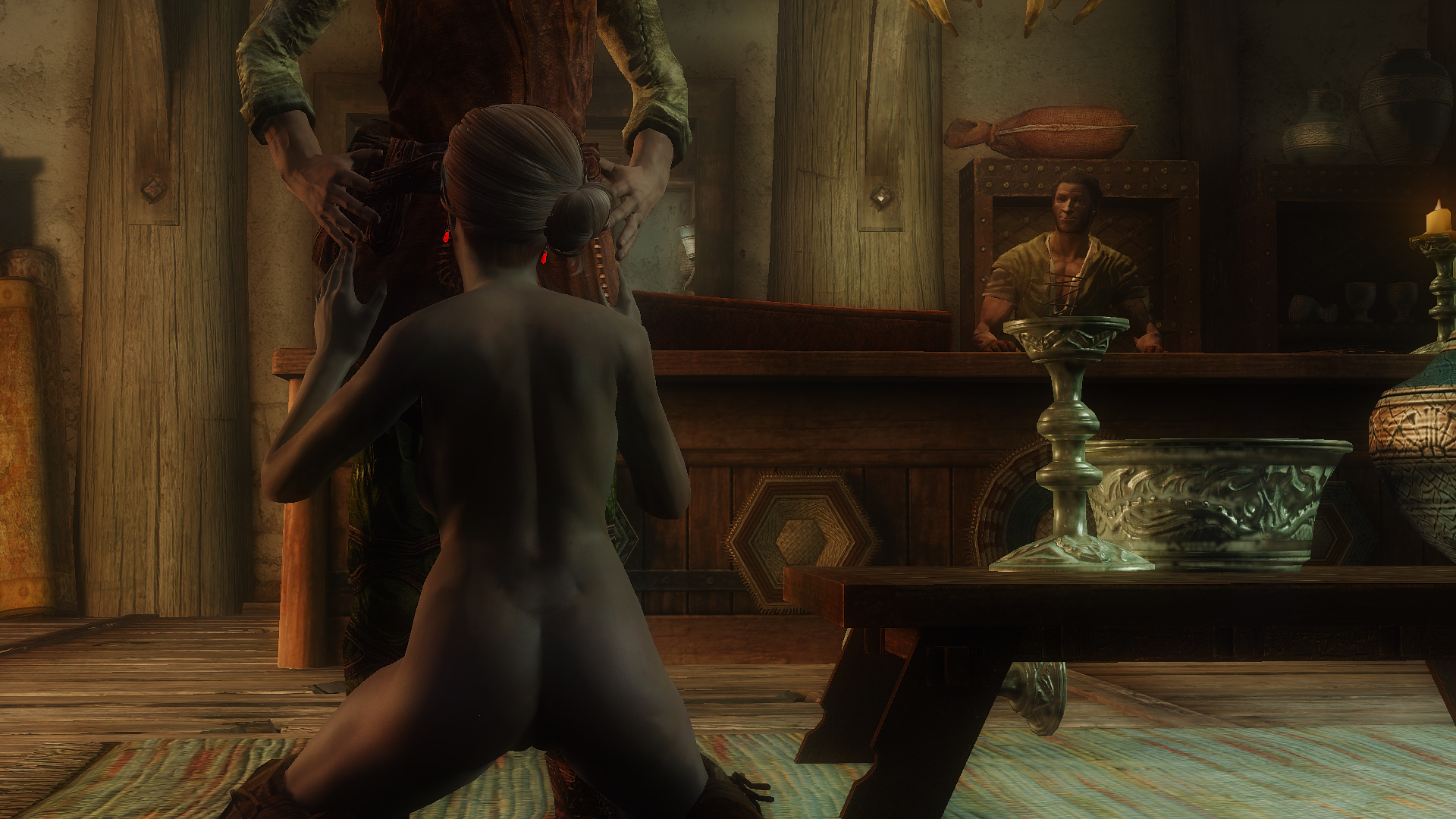 She could see Belethor watching out of the corner of her eye. Having an audience was absolutely not a new experience for her, but that Breton bastard was perhaps the creepiest onlooker she'd ever had. She refocused her attention on the squirming boy locked in her lips, diving down his full length and holding it for as long as she could. She gasped for air, trailing spit from her lips as she released him. Sigurd's twitches and winces were amusing, but this had already gone on too long for her liking, so she set to work bobbing up and down, working her tongue with masterful rhythm. 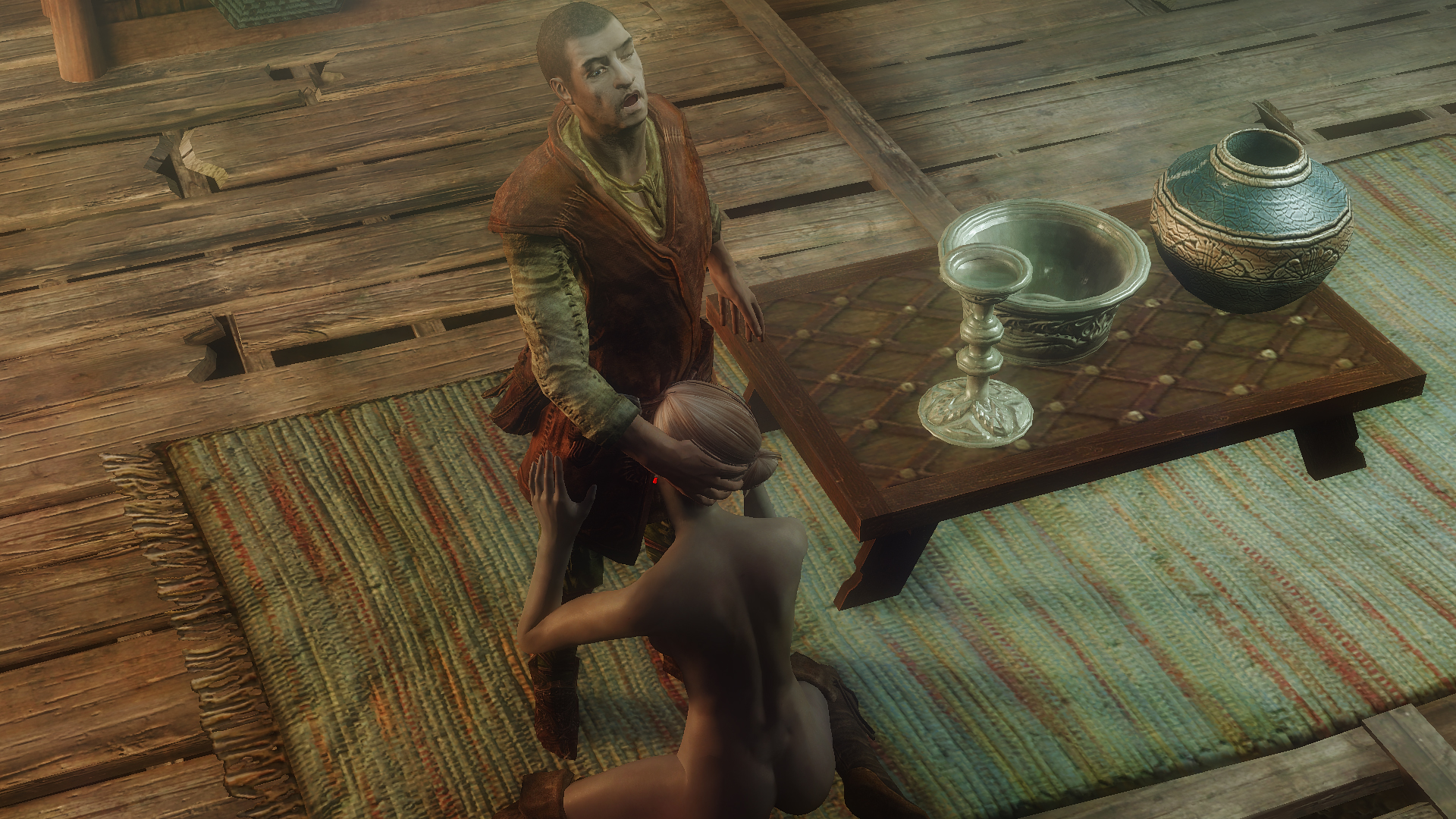 As expected, he didn't last long. He grabbed her head and held her down as he shot a fairly impressive load straight into her mouth. He groaned, and Selune felt the muscles in his thighs melt in an instant. It was a miracle he stayed standing. She kept the cum in her mouth for a moment, opening wide to show the boy what he'd given her. She swallowed with with an exaggerated sound, showed him her now empty mouth, and smiled up at him. "I wouldn't expect another bonus like this one, boy," she said. "You'd best commit this one to memory."

She stood and walked over to her clothes, collecting them. She turned to Belethor, "Was that satisfactory?" she asked.

Belethor smiled. "A deal's a deal. I'll get you everything on that last as quick as possible." 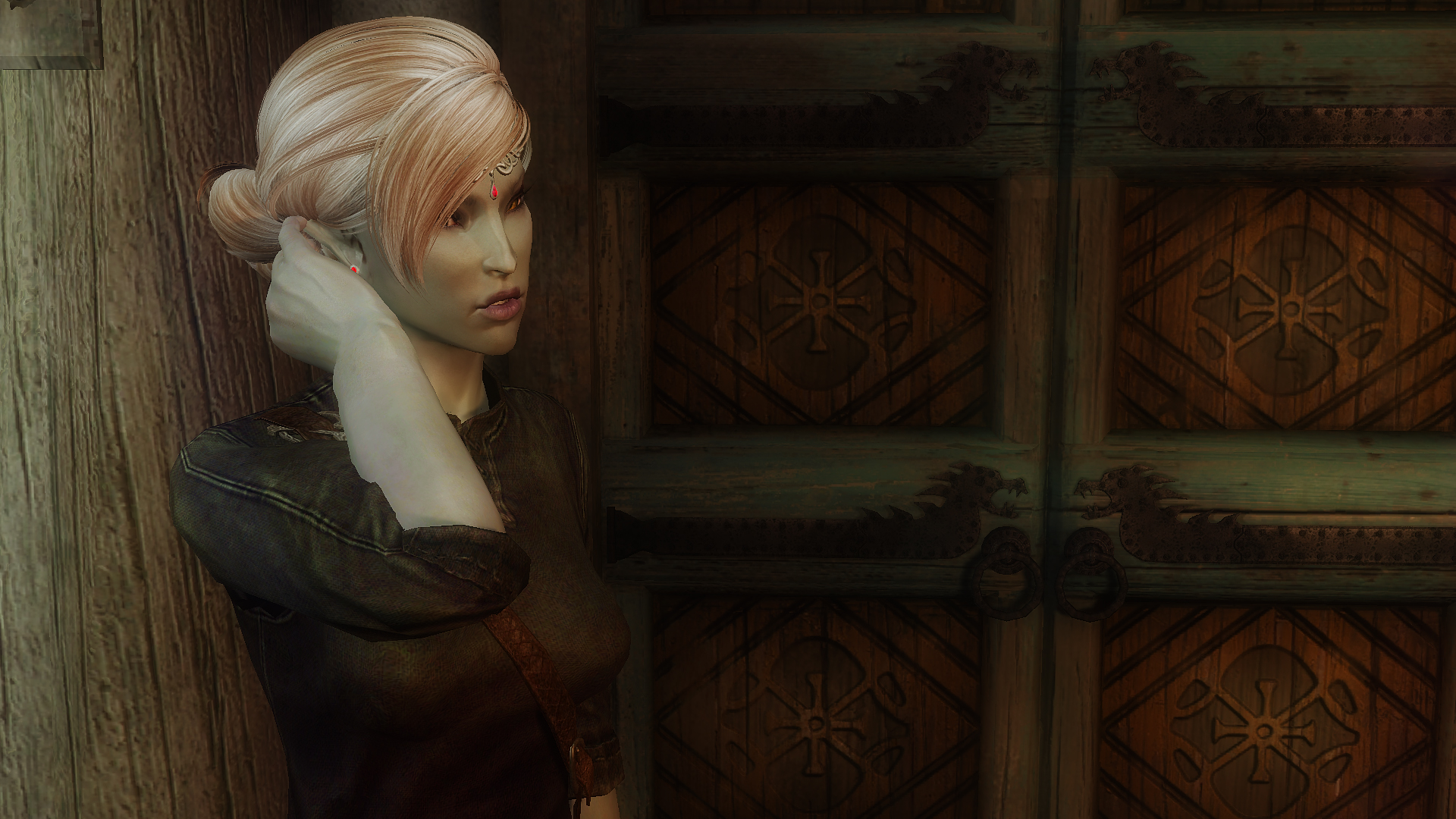 "You had better," Selune said. "I'll be back in one month to collect my shipment... or your severed head. Whichever, depending on the outcome."

A look of terror masked by a smile shot behind his eyes as he nodded. 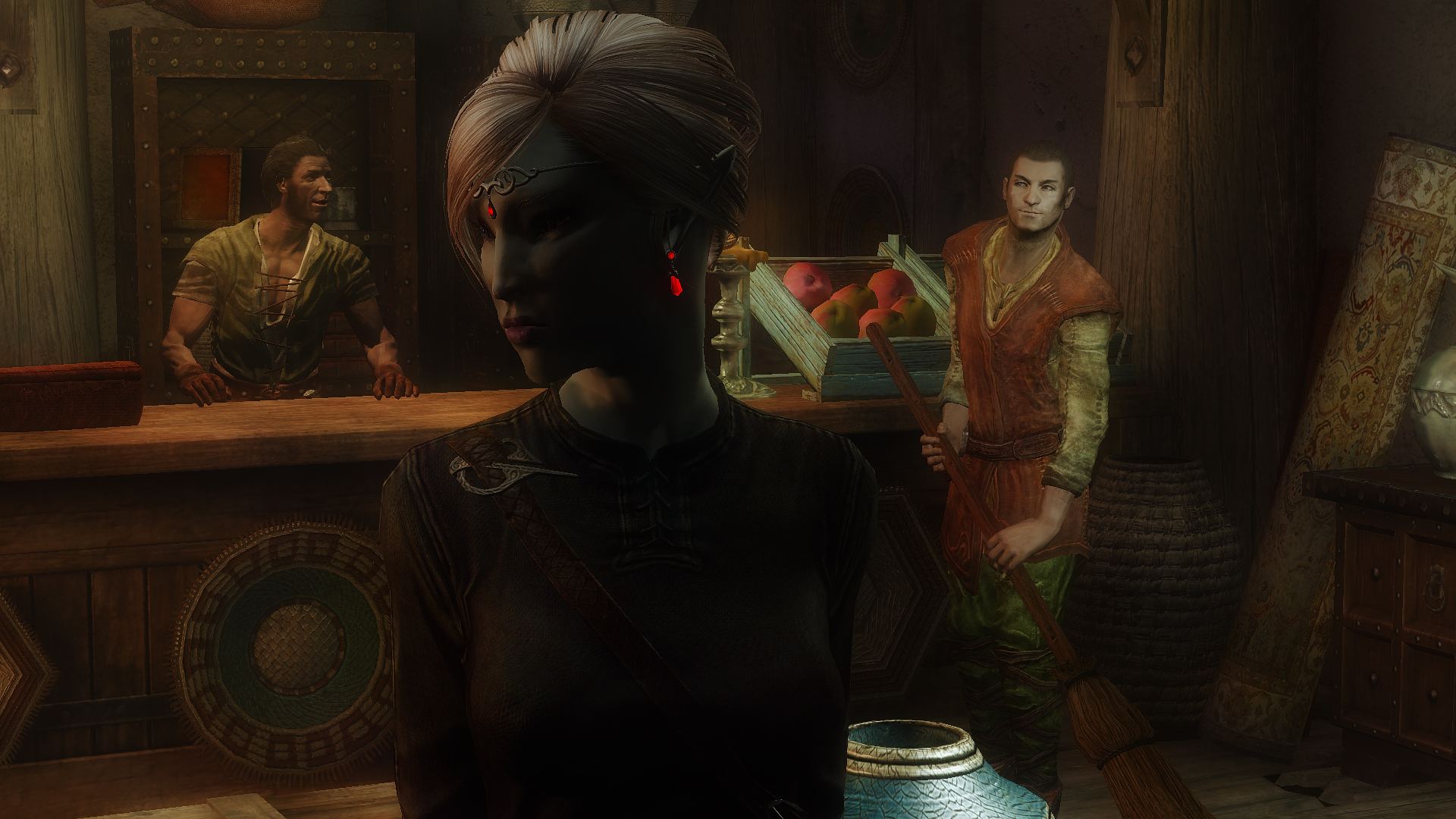 "See, boy?" Belethor said to Sigurd as Selune moved to leave. "I'm telling you, haggling isn't always about the money!"


Here's a pair of bonus shots not used in the story! 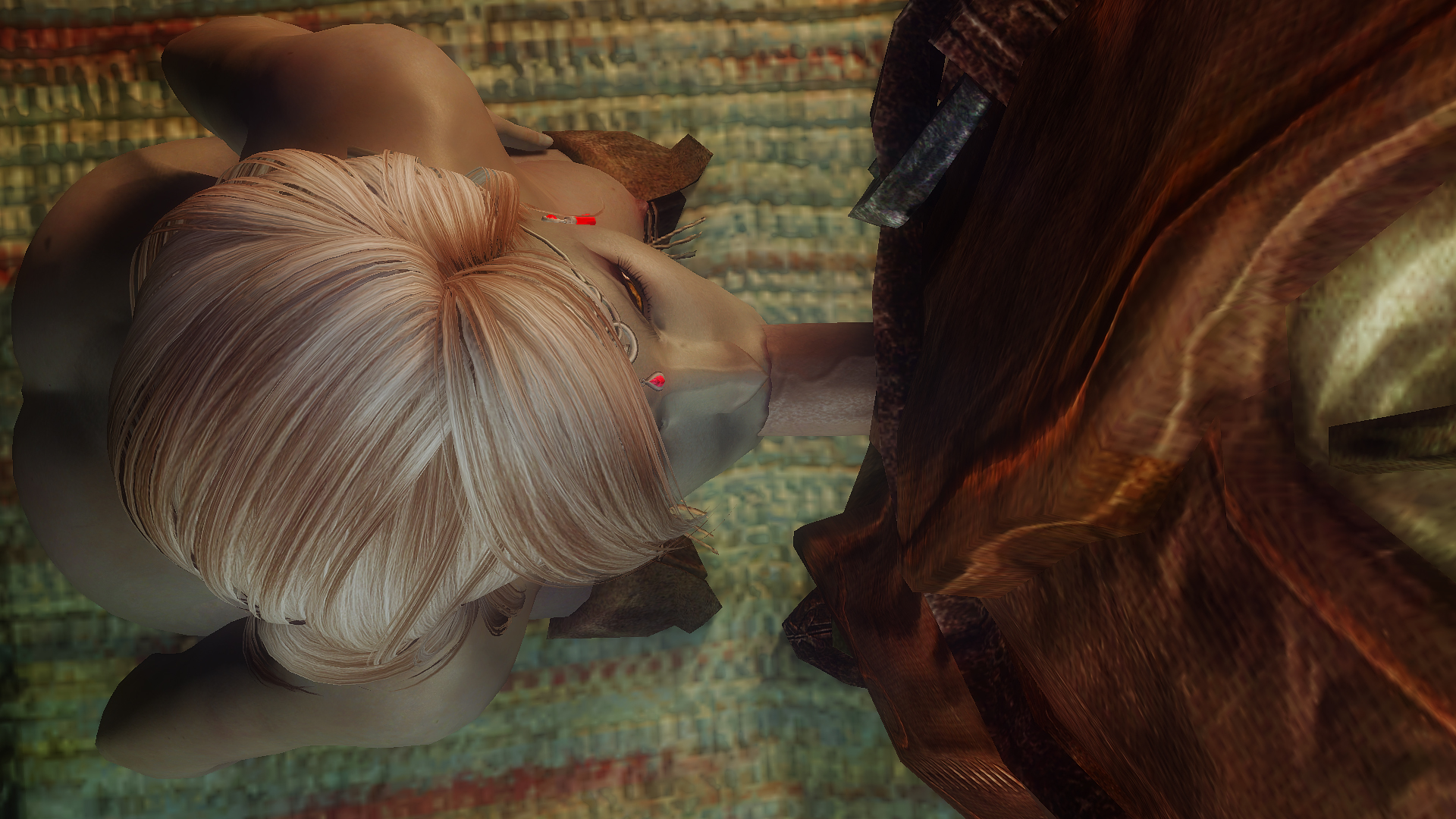