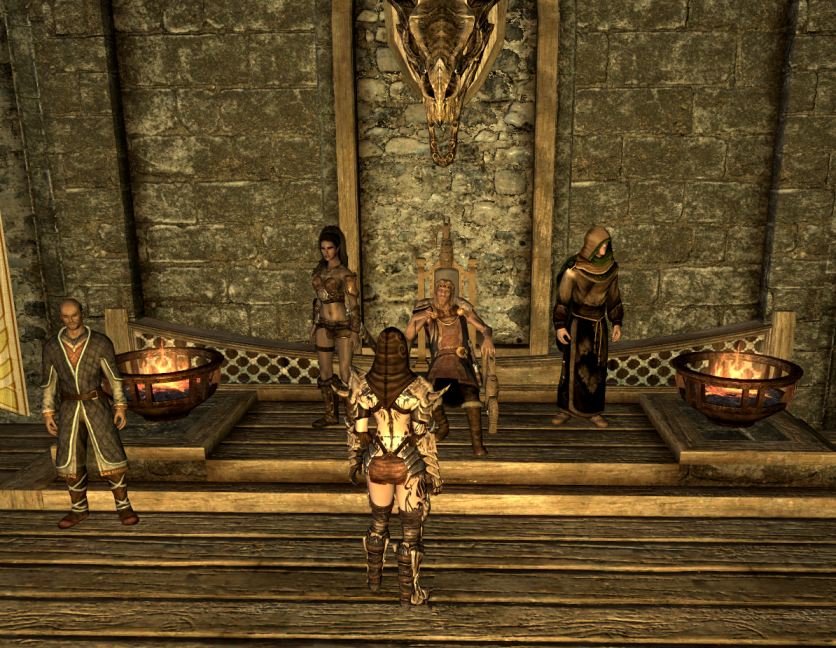 Alduin defeated, for now, I must find a way to chase him down and permanently put an end to his threat to the world. Paarthunax suggests that I trap one of his still loyal dragon followers to find where Alduin goes and how to get there myself. This may prove more difficult with both sides of the civil war intent on capturing Whiterun for their own and controlling the central part of the country.

First steps first, I should ask Balgruff if he'd be at all willing to let me borrow his keep for the project.

The jarl was initially hesitant when I asked about borrowing his keep. In fact he flat out said No. When I asked him, civil war aside would he permit me, the Dragonborn, to trap a dragon he was a bit more welcoming. Why he thinks I saved his city I do not know, but since he's giving me the credit, I'm going to take it. I promise to arrange a cease fire and he suggests I speak to the Greybeards. I chuckle a little and tell him that I'm taking a more direct route. "I'll just deal with Ulfric the same way he dealt with Torygg... just without the death and fleeing and getting innocent gate guards killed. I know more than one Shout and if he doesn't want his throne room set on fire, he'll leave you alone for the next few months." Balgruuf wishes me luck and I depart for the stables.

Arriving at Windhelm, I put up with the usual racial taunts from the guards about my Cyrodilan heritage. Small minds and all that. Making my way to the historic hall, I decide to wait my turn while the various thanes present their petty petitions.

Eventually it is my turn and I approach Ulfric. I might look like a barbarian in my bone and ancient steel but at least I look like business. I have removed my mask but the hood of the dragon priest still covers my head. I ask Ulfric "People say that you have learned to Shout and used the Thu'um against Torygg, King of Skyrim."

"I bring not a sword but a message. Alduin has returned. I am Dovahkiin, blessed by Akatosh! I will stop him but you must cease hostilities around Whiterun and its Dragonreach while I prepare my attack."

"The World Eater of song and legend? If so, that is grave news, but what proof have I that you are what you say? I just told you that anyone can learn the Way."

"Ambition and dedication I have, though I am no Nord." I reply, "How many Words did you learn, while you learned the Way? I am Dovahkiin! I have taken the very the souls of the dragons I have killed and wear their bones. I know their Words as they do and can do more than send a boy sprawling."

With that probably overly dramatic declaration, I demonstrate some of the Words I've learned from the Walls and absorbed from the dragons I killed. Aura Whisper and Become Ethereal and Disarm, Whirlwind Sprinting to the doors and Throwing my Voice back to the thanes by the throne. I breath frost across the ceiling, leaving it icy, before Sprinting back Ulfric.

"Sign a pact with Tullius declaring Whiterun neutral ground for the next moon and I shall enforce the terms of the treaty. You used the force of the Thu'um at Markarth and have witnessed my Thu'um. Walk the Way and put aside violence while the World Eater flies."

Ulfric finally agrees to my terms, believing that worse than icicles are in his future if he does not. He tells me to let General Tullius know that he will continue to free Skyrim where he can and not allow the invaders to rest. Taking the signed document I exchange it for the one I took from the Thalmor Embassy. "You may have heard that a thalmor party had a bit of a security breach recently. A guest left the event and some prisoners escaped. They might not have mentioned that a few documents were stolen as well. That one in particular isn't too complementary to a certain individual and I thought you might like to read it." As I turn away and start to leave I hear him break the seal. Turning my head I say "You might not want to read that here... just in case" before putting on my mask and leaving the hall.

A few days later I arrive in Solitude with my treaties, one on paper addressed to the General and the second, an axe, for Jarl Balgruuf. Making my way up to Castle Dour, I make sure the peace cords are tied around the axe in Imperial style. The guards let me in and direct me to the council room where I find Tullius and Legates Rikke and Adventus Caesennius discussing strategy. The general and Rikke seem to be arguing, yet again. Unsurprisingly, the General does not recognize me and rather bluntly asks if I'm lost.

Removing my hood I ask the General if he had time to read the material I delivered to him in Helgen. Recognition flashes on his face as he replies "Yes, though it turned out to be useless after that dragon attacked and Ulfric escaped." Nodding, I reply as I hand him another copy of the thalmor dossier on Ulfric "I don't suppose this is the same information? I obtained this through... other channels and brought it along." Tullius raises an eyebrows as he glances at it "Other channels, huh. This might be the same info but it is just as useless now. If not for this, or with that axe, why have you come here?"

"I actually have another document, from Ulfric himself. I'm not sure you will like it, but I have some good news and bad news to go with it." Handing over the document I tell him "The good news is I know which dragon attacked us at Helgen and I have a possible reason why. I am sure Rikke will know more about Alduin than you as we Cyrodilans haven't heard much about the World Eater."

Rikke breaks in "Alduin? You think that was the Eater himself at Helgen?" Turning to her I say "Since I've had the opportunity to face him a few more times I am pretty sure that was the same dragon. Given that he calls himself Alduin I'd say either the World Eater legend is true or he's just taking the name and flying with it. Since he doesn't die as easily as the others, I'm going with the former. Dragons themselves were thought mere rumor and they've proved to be real." Tullius still looks incredulous while Rikke turns to him, saying "Reclaiming Skyrim will mean nothing if the children of Akatosh turn it to char and the first dragon eats our souls."

"How about this?" I propose and turn to an unoccupied corner. "Krah!" I say ("cold") and frost forms out of the air, covering the walls and a chair. I turn back to the general "You sign the treaty and withdraw from Whiterun for the next month. Fight Ulfric any and everywhere else but Whiterun is mine. I need Dragonsreach to save the world, you can have the rest."

Stony faced, Tullius says "I can agree to a month's cessation of hostilities around Whiterun, as long as Ulfric also pulls back. If he breaks the treaty, all bets are off and its up to you to keep him in line. If he believes in the same mystical mumbo jumbo you can do, fine." We call in the scribes and make copies of Tullius' agreement, leaving Ulfric's declaration with him. I return briefly to Ulfric, exchanging few words with him but he says nothing about the thalmor document. I can tell he is not happy about things. We part as he tells me I have my month.

I just hope Esbern has a name for me, now that I have my trap. Luckily, he does and is waiting for me in Whiterun.