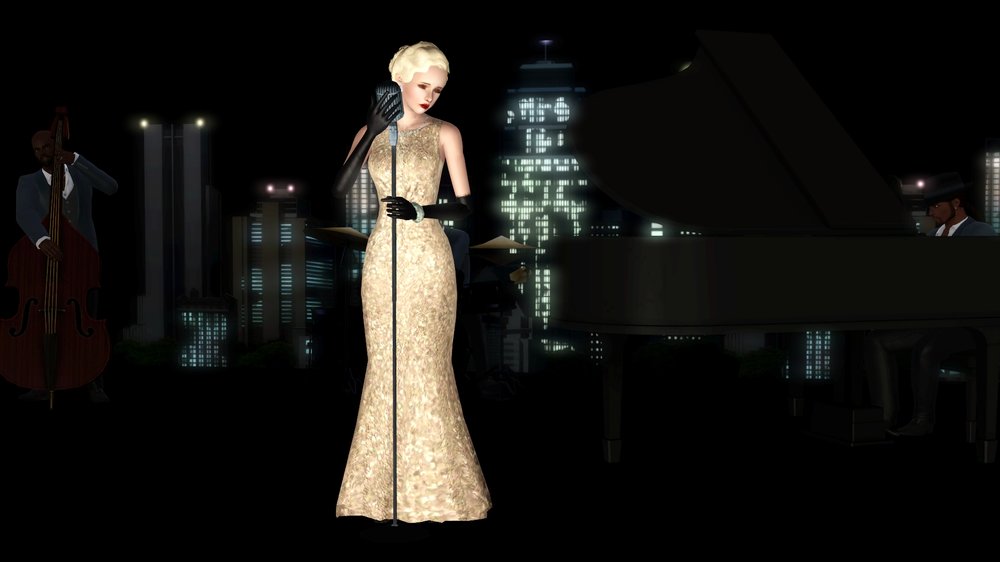 Just finished editing the latest video. I had intended on it being short buuut I had too much good footage to let them sit on my harddrive where no one would see it so this entry is about editing, specifically music editing because that was the hard part in this film.

Some of my films use actual music from known artists, like

* which is really just the SImlish version of Austra's , After Dark, Wasted Time (I edited this one), and Leather & Lace. But for the most part, I try to use royalty free music except when the song is so powerful or inspiring that I have to use it like a less R rated film but no less controversial The Moment I Said It (will not link this one). is an example of me using royalty free music and editing it to suit my purposes. If my memory serves me right, I think that was the first time I'd actually edited a song and it kinda makes me cringe. I was doing really well up til the 25th hour of exhaustion lol.

Anyway, with Amber Blues I used Amy Irving's Why Don't You Do Right from Who Framed Roger Rabbit and it's short (3:15) but I miraculously found an extended version after hours of trying to extend it myself. Lucky me. So you won't have to be subjected to my failed attempts at editing music.

So what tips can I give you in this regard? Find what you want, really exhaust your search methods before tinkering around with songs--unless you're good at it. But if you must tinker with your film's score have patience and try to do basic stuff only.

So onto stuff about the actual film. I really enjoyed making Amber Blues. It has a fully thought out story that I actually took time to write down. Normally, I'll jot down a few key plot points and jump from there. If you want to know about the story behind Amber Blues check out the spoiler below.

Don't you just love a good story? I do!

Amber Blues is about a sweet faced jazz singer named Amber. She's married to Thomas Sullivan who, in his former life, was also a singer. Down on his luck, he found Amber singing for fun in a club with some friends and knew from the moment he heard her sing that she was his mealticket. He charmed her, married her, and changed her into a vampire so that she would always have that angel face. A few rocky years pass while Amber adjusts to her new strength and diet. In that time, Thomas puts together a band of brothers to form Amber and the Baby Blues. There's Llyren on the piano (wink wink), his old brother Theo on bass, and their younger brother, Bam Bam on drums.

The band accumulates country-wide fame and Amber and the band is ecstatic but Thomas sinks ever deeper into rage. He's frightfully jealous of Amber's fame and possessive of her in general. He hates her friendship with the Baby Blues, particularly her close relationship with Llyren.

One night, Amber invites Llyren and his sister Evan to the Sapphire Club to see a new jazz band. After the show, the group decides to head out for dinner when one of Thomas' human lovers, Maggie, approaches him as they stand outside the club waiting for the car. Embarrassed, Amber cancels the remainder of the evening and the group splits up. Llyren drops his sister back at home and heads back out. He has a terrible feeling that something bad will happen to Amber that night.

At their upscale condo in the downtown district of Roaring Heights, Amber is getting ready to wind down her evening even though she's furious with Thomas for embarrassing her in front of Llyren and Evan. The couple gets into a shouting match and Thomas punches Amber in the face, breaking her nose, cutting her lip and cheek. Overcome with emotion, Thomas rapes Amber in their bedroom and after a drink leaves.

Outside, Llyren watches Thomas leave and rushes upstairs to find Amber unconscious and bleeding on the floor near the bed. He helps her up and his astonished to see the wounds on her body heal though the torture of her ordeal is still fresh in her eyes.

Over the next few days, Thomas does not return and Amber spends time with Llyren and his family at their small home. After joining them for a little get together on a Sunday afternoon, Llyren drives Amber back to her home and she invites him upstairs for a drink. In Thomas' absence, Amber allows herself to let her feelings for Llyren bloom and the two make love in her bedroom.

The next evening, Llyren is in Amber's dressing room talking with her before that night's performance when Thomas bursts in. He and Llyren briefly fight--Llyren is no match for Thomas' strength or speed. With one punch, Thomas snaps Llyren's neck and Amber kills Thomas by stabbing him with a poisoned blade. She saves Llyren's life by changing him into a vampire. The show goes on as planned and they live happily ever after...

I loved Llyren so much that I decided to do a film about how he became a vampire. I'll probably do another one soon about how his and Amber's relationship deteriorated and how he became the owner of Leather, one of the hottest clubs in Bridgeport.

That's all folks. Enjoy the film!